Not all Bob's are created equal 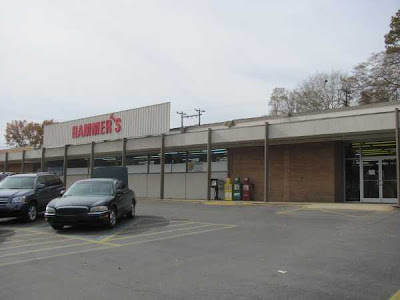 We have been in Fort Payne for three days now, yet had not once set foot in town. That ended today as I got my fill of the history of the north end of Fort Payne, while Linda spent an equal amount of time shopping. Maybe I should back up a bit, she didn't spend her time shopping, she spent her time buying. And when I finally found her, all she could do was give me what she had picked out to hold for her while she searched for even more items to buy.

She'd started at the Salvation Army Thrift Store, and to be clear, no one has ever accused her of being a spend thrift, and eventually she gravitated to Hammers, where I finally found her. And it was when it came time to leave that is when we ran into the not Bob, Bob, the Bob who was not created equal. We were the next in line at a very long register line while the call went out, "Bob, I need help at the registers."

It wasn't long before smiling Bob appeared, clad in a University of Alabama shirt and exhibiting all the intelligence one would expect from someone associated with such an institution of lower learning. Instead on taking us first, he took the person at the end of the line, and everyone behind us quickly got into that line. This caused some real eye rolling from the clerk that called Bob to the front, but we decided it wasn't over his actions. it was because she knew his level of intelligence, him being such a staunch University of Alabama supporter and all. In the end we got checked out, and we got Bob's big smile and thanks for shopping with them. As for us, there sure isn't going to be anymore shopping with a store that employs someone with the intelligence, or should we say lack of intelligence, that Bob displayed. Sometimes we Bob's just have to realize that not all Bob's are created equal, no matter how much it pains us. It's a tough thing for a Bob like me to admit, but there really are Bubba Bob's in the world. 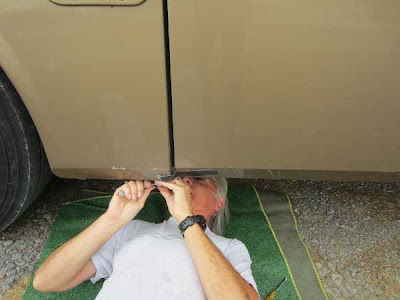 Hard as it is to believe, that shopping and history exploration trip took the morning and much of the afternoon. I guess you can say, I love history and Linda loves buying. On the way back to the coach Linda mentioned something about me spending the rest of the afternoon fixing things, but somehow, that went over my head. Once I was informed of what was expected of me, it didn't take long before things were happening. First off was the replacing of the batteries in the outside thermometer. I wasn't sure why she was dead set on me doing this task today, especially since it has been over two months since the outdoor thermometer stopped working because the battery was low. You'd think she could exhibit a little patience on occasion.

That job done, my next assignment was to fasten down the body panel that had come loose immediately in front of the passenger side rear tire, that also happening several months ago. The first thing was to remove the broken bracket, a job that was easy on paper, but not in practice. Three screws, one came out easily, one broke of when turned, and last one rounded out, proving nearly impossible to remove. In the end it succumbed to a special pair of vice grips that Rich gave to me at Christmas many years ago, and from then on it is just nothing but more problems. The broken bracket, a casualty of when we hit a block of wood while traveling down the roads of Life. In more ways that one we were lucky because all that block of wood flying off the tire did was to fracture the two brackets that held the body panel in place. We have seen photos of pierced body panels from a similar experience, and it made us realize just how fortunate we were.


With the broken bracket removed, it was time to make a new one. I call this the full timers vise, using the space between the board in the picnic table to hold the material you are working on. It took a few tries, but before long, the new bracket looked just like the old one, and finally, with a little more effort than anticipated, the panel was secured in place. 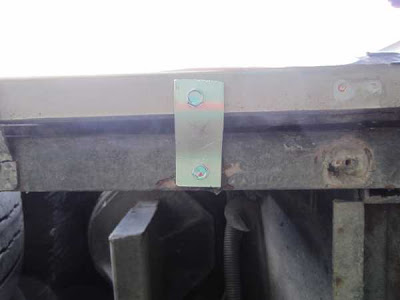 Where the old bracket was is to the right, and I have to say the replacement Linda and I made looks like it will work just fine. It really wasn't as easy as I make out, a broken drill bit, at least 8 trips from my position under the coach to figure out how to do what I had to do, made it nothing but easy. I always look at it this way, if it was easy, then anyone could do it, and since that certainly wasn't the case, I must be good at what I do. Bottom line, if Life in the Fulltime world was easy, everyone would be doing it. Next to bottom line, six years into fulltiming and we are still constantly learning new things.

I am reminded of a conversation I had when we returned to the town we had lived in for over twenty five years. The time was six months after we had started fulltiming. An old and well intentioned friend of ours said that he and his wife had also been full timers. They had spent six months traveling all over the US, had seen everything, and stopped full timing. In their minds they had seen everything. In our minds, after nearly six years in the full time Life we have seen next to nothing. They lived the full time life, we live the full time Life, and therein lies all the difference.
Posted by Bob and Linda at 8:49 PM