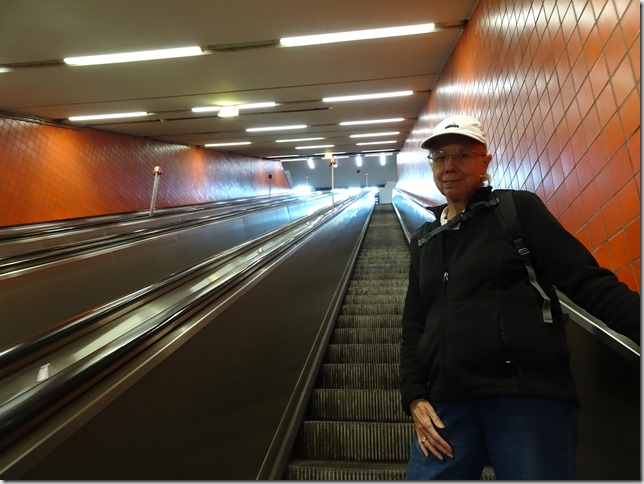 Not many people out early on Sunday morning as this photo of us, or I should say, Linda on the escalator from the U-Bahn station up to the Train station shows. Hint: the only grocery stores open on Sunday are in the bigger city train stations. Be prepared for aisles jammed like you never experienced. Maybe the reason no one was on the escalator was because they were all in the grocery store? One of those things you need to experience to believe. 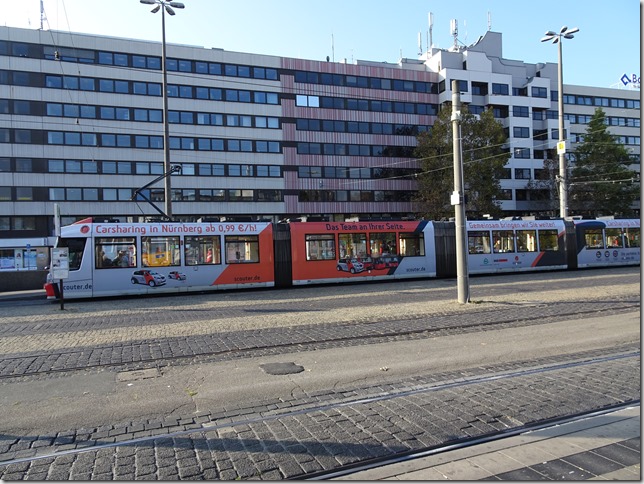 The trams were few and far between, plus they had fewer cars. 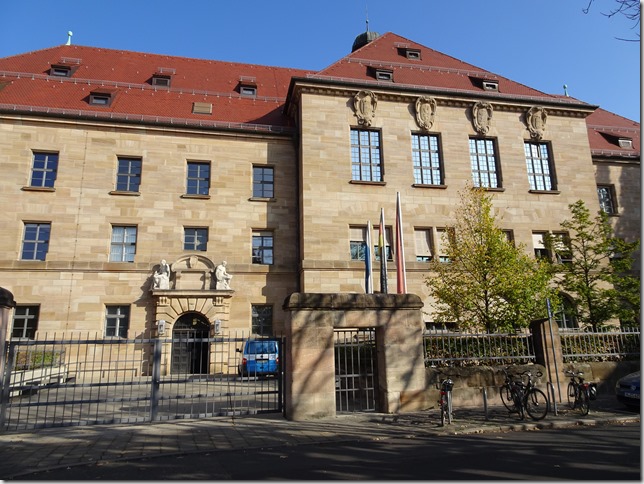 Our morning destination, The Palace of Justice where in courtroom 600 between 20 November 1945 and 1 October 1946 the Nazi war criminals and organizations were tried form crimes committed during WW II. We had been here during our previous trip and it was on our must visit list again.

For anyone visiting, it is place that takes hours to see. It is not something to visit with a tour group. There is no way during that rushed visit the true horror and resulting comprehension and the beginning of understanding of what happened here can be experienced. It is simply beyond my  ability to comprehend that people can actually believe the atrocities that occurred during the war never happened. Did the birth lottery put you in the wrong group? You’d be hauled off to your State sanctioned execution, being part of the final solution, or to say it for what it was, murder. 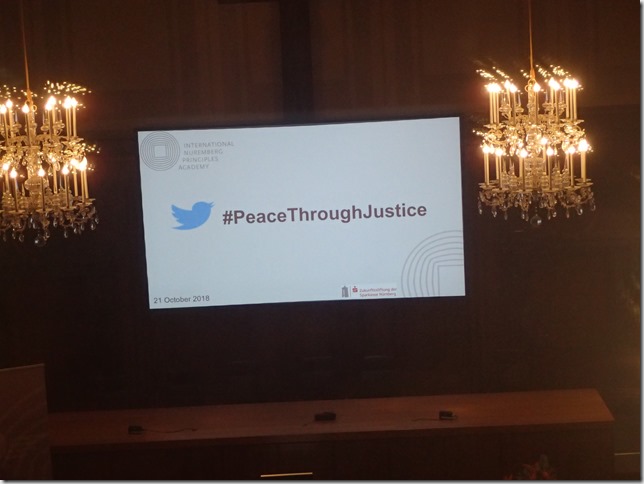 Courtroom 600 is not a memorial, it is a working courtroom that has been significantly changed from what it looked during the trials. We came on a Sunday hoping to be able to enter it. However there was an International Justice Conference being held in it, so the only viewing was through the small windows up on the third floor. We had been in the courtroom the last time we were here, but we had to feel sorry for those who were here to see it today. 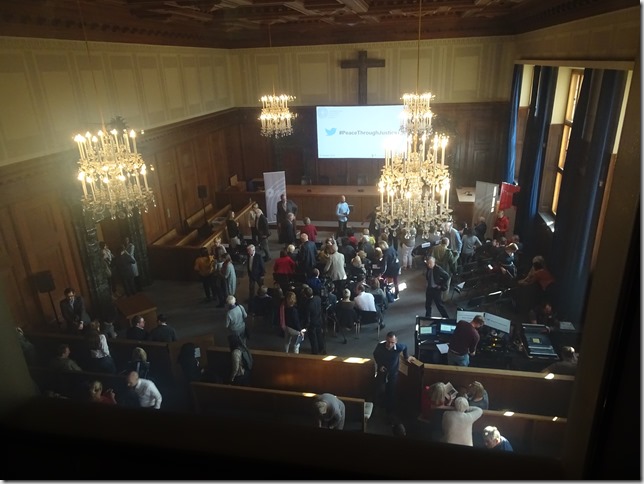 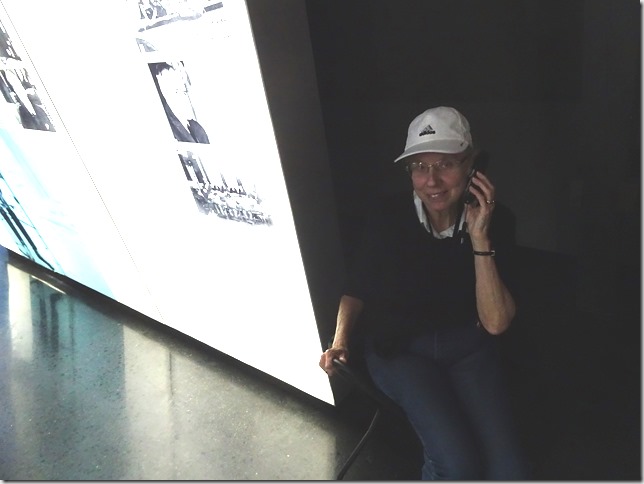 Each visitor is given an personal audio guide in their language (all the signage is in German). Linda having been here before and knowing we would be here for hours, grabbed one of the folding seats they have by the entrance. Most of the exhibits are photographs, though some are movie film (now video) taken at the time. Example of a display. The top photo shows the absolute devastation to the city. However, the allies spared the huge Grand Hotel so they would have a place for the personnel conducting the trials to meet and work. They also did not bomb the Palace of Justice or the prison attached to it so the trials could be held there. The rest of the old town was basically incinerated by allied bombing, along with numerous inhabitants. 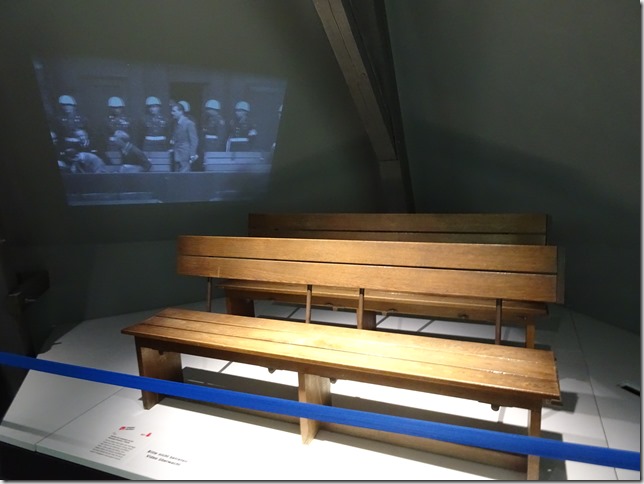 Actual bench where some of the accused Nazi war criminals sat during the trials. I use the word accused because some of them were acquitted of the crimes they were accused of. 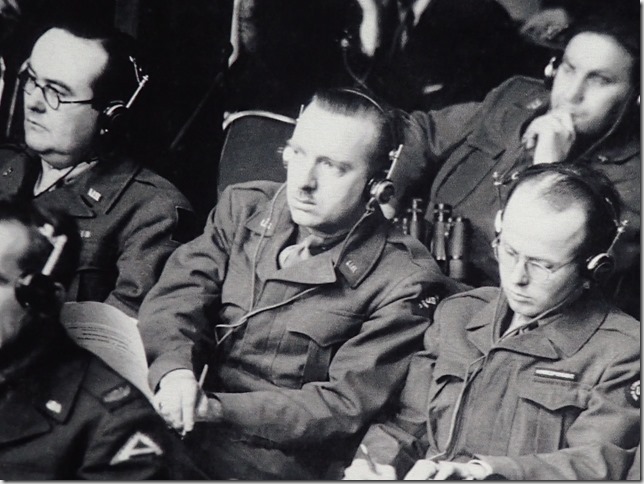 You might recognize one of the American reporters covering the trials. Especially if you watched the CBS Evening News in the 60’s and 70’s 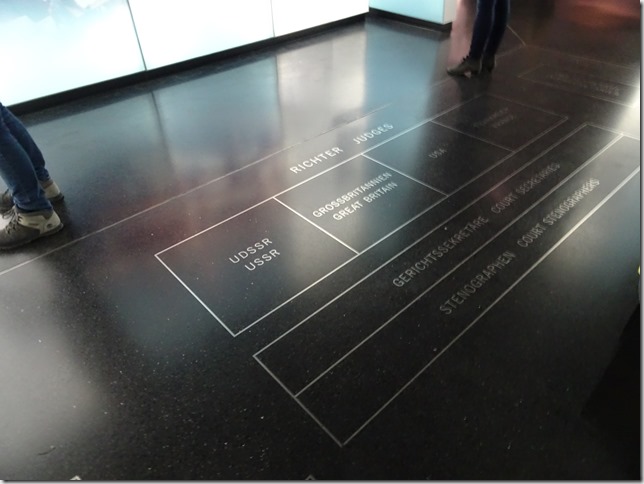 Everywhere yo look there is something about the trials. The trails were held under the US system of courts. This was radically different from who European courts operated and put the defense attorneys for the accused a huge disadvantage. One comes away wondering what would have happened had the playing field been level so to speak. This is not to lessen what the accused did, but to wonder just how fair our supposedly fair court system really is. Why do the rich always seemingly get off, if they are even charged in the first place, but the poor are quickly tried and convicted. What is equal under the law about that? 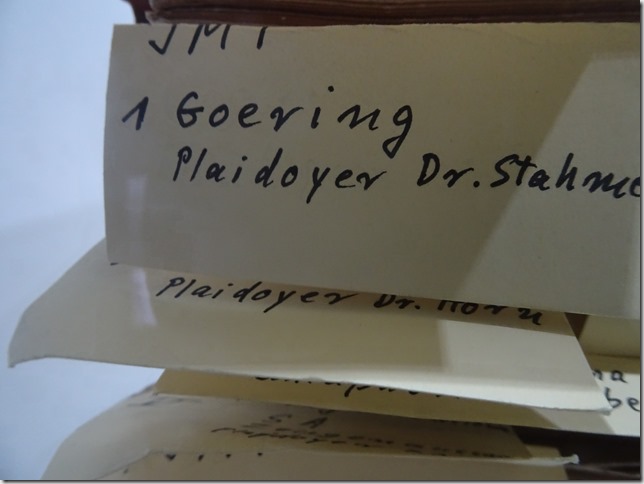 A stack of file folders with this note. Seeing things like this makes the trials real. 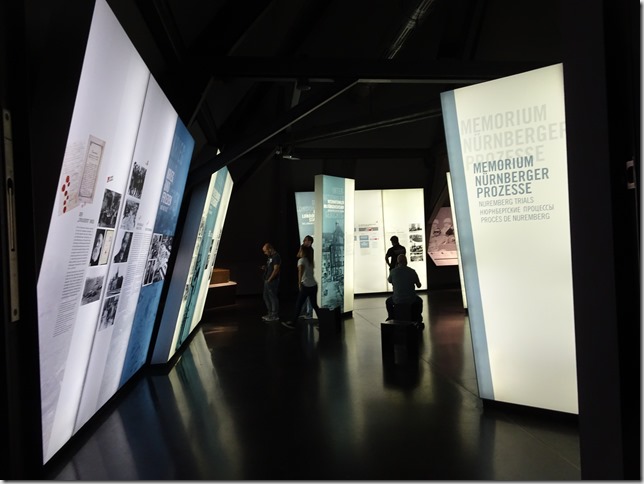 A last look as we are leaving to give you an idea of what to expect if you visit. This was later in the day and the crowds had dissipated. I know I get carried away writing about this place, but what happened here sears deep into my soul. How can humans be so stupid as to let similar things happen over in over in countries throughout the world? What does it mean to make a country great? Nazi Germany was also once “great”. 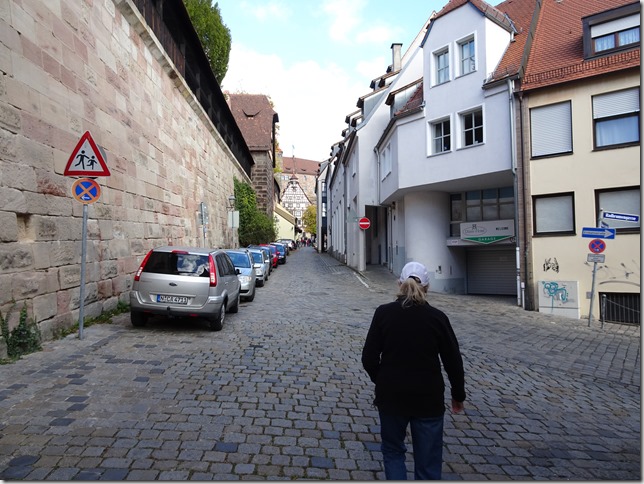 Back to the present, and back to just up the street from our apartment. It was time to head back in time to when a man named Albrecht Durer called Nuremberg home. 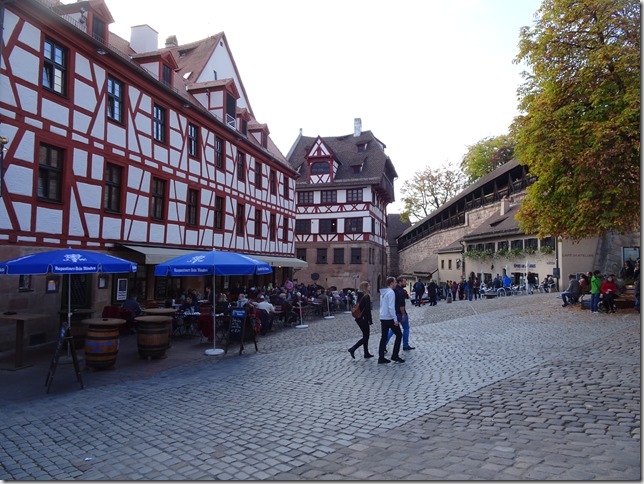 Turn the corner and we are back in time. 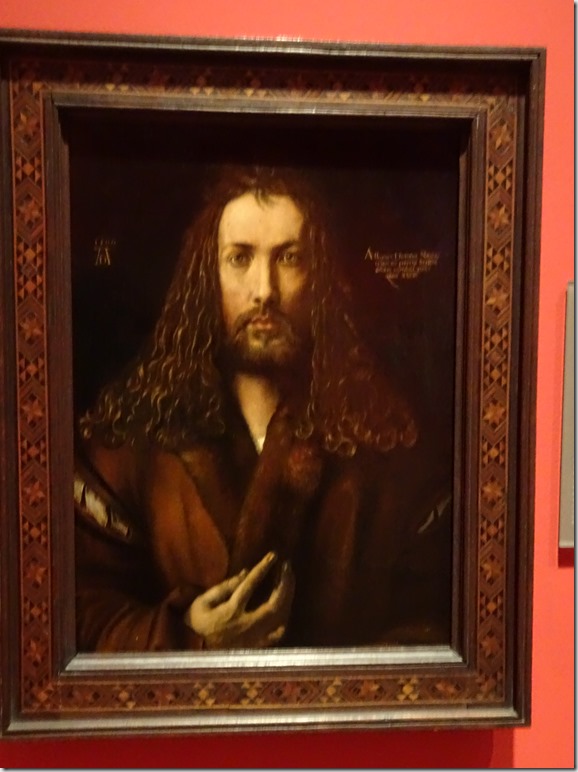 One of the most famous self portraits of all time. (This is a copy of the original.) 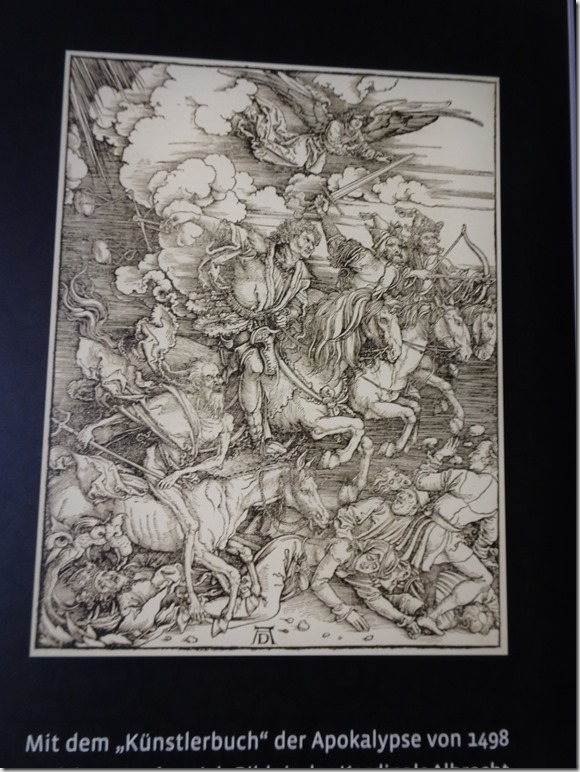 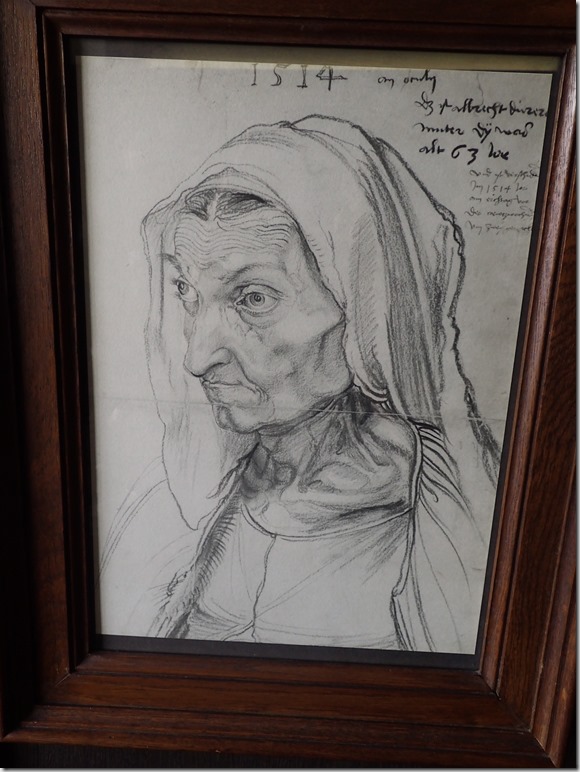 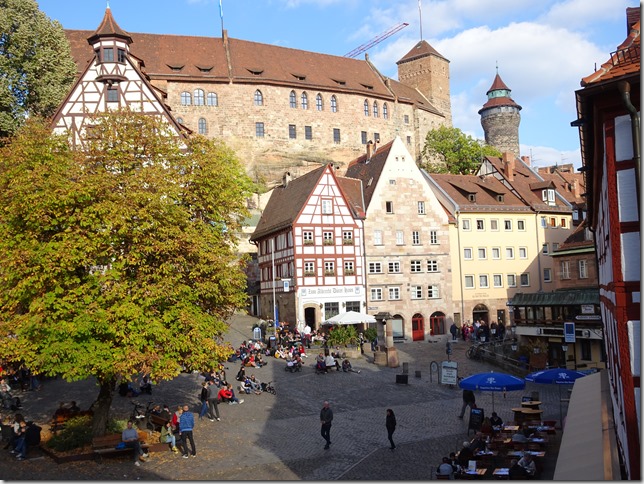 Wonder what Durer would have seen looking out this same window on a Sunday afternoon when he lived here? 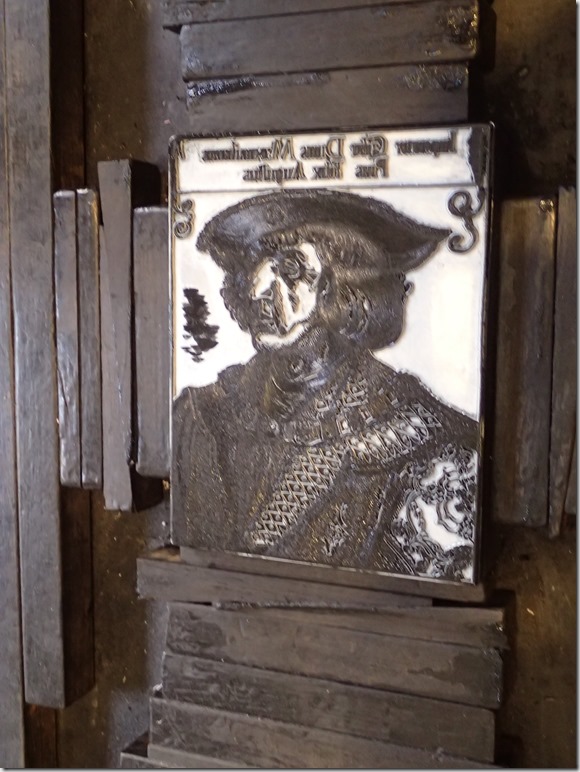 Inked engraving read to go into the printing press. 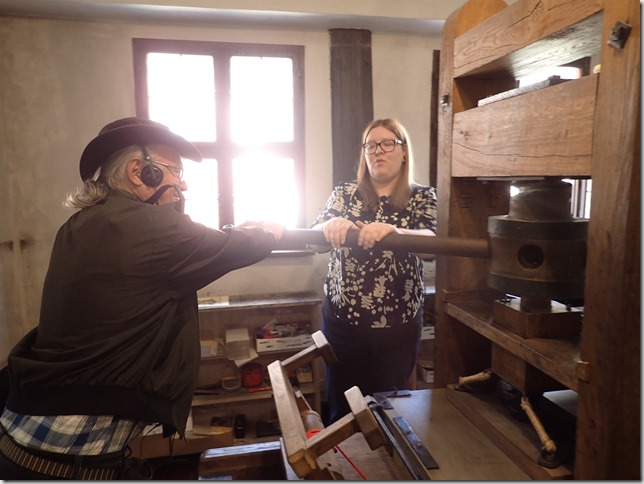 Pinter and printer’s apprentice at work. 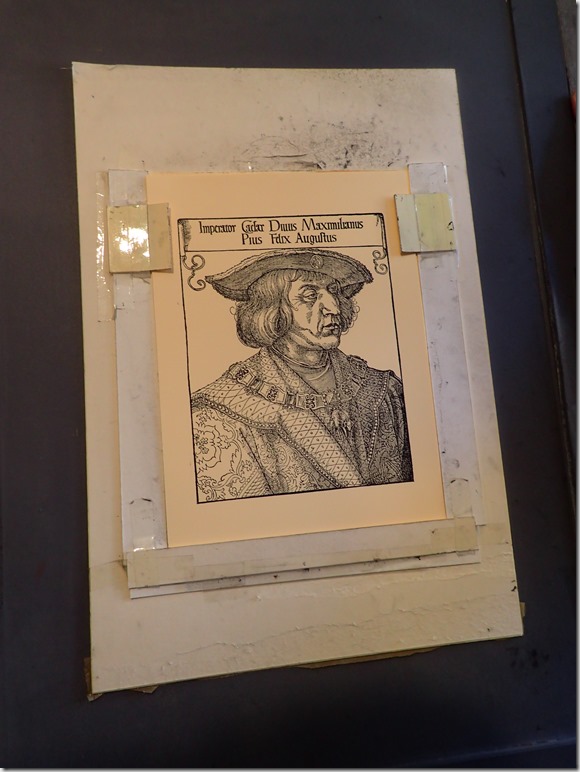 I didn’t do too bad if I do say so, and my print is coming home to hang in the coach house. 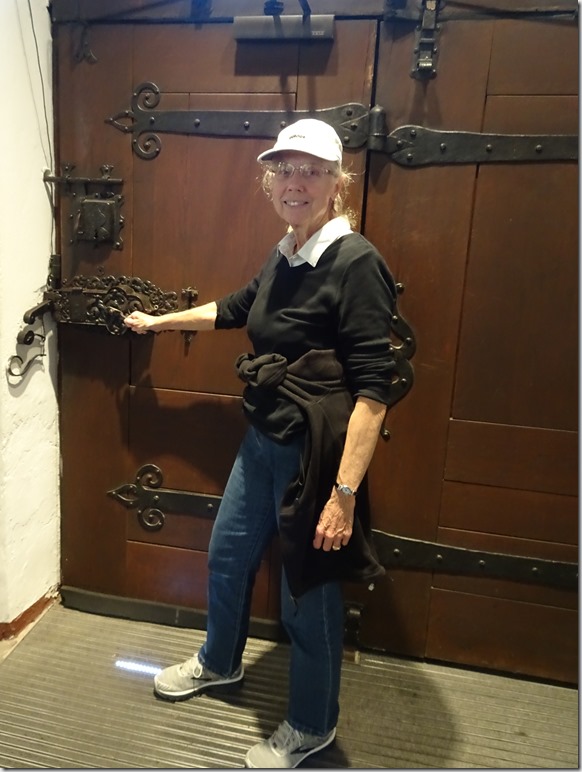 This was the actual house Durer had lived in. That was some latch on the door, as the pretty model demonstrates. 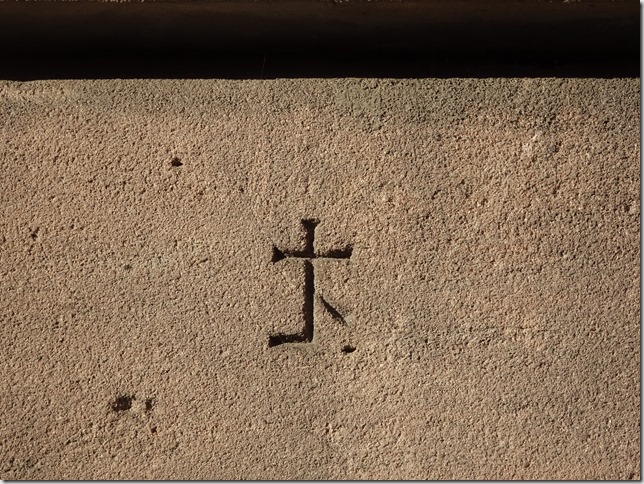 Stone cutter’s mark on a stone block near our apartment. History is everywhere we look. Till tomorrow, tough day for me today, and an even tougher one planned for tomorrow.