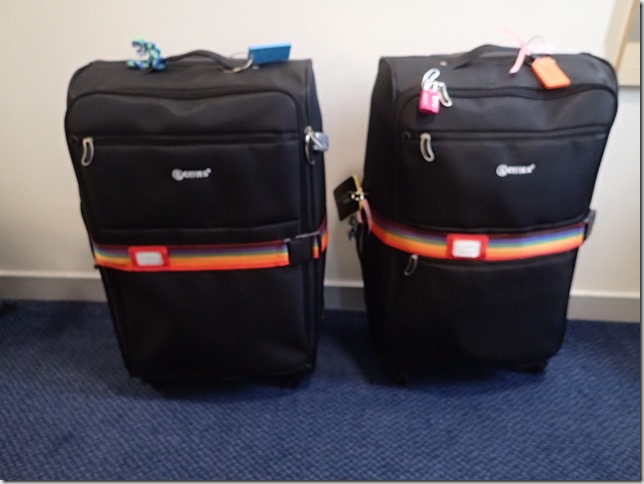 I’d like to say that the photo is not blurry, you are just seeing it through our tears of joy. But, alas, the photographer messed up. I don’t want to tell tales, but I will say it wasn’t me.In Big Trouble Bob. 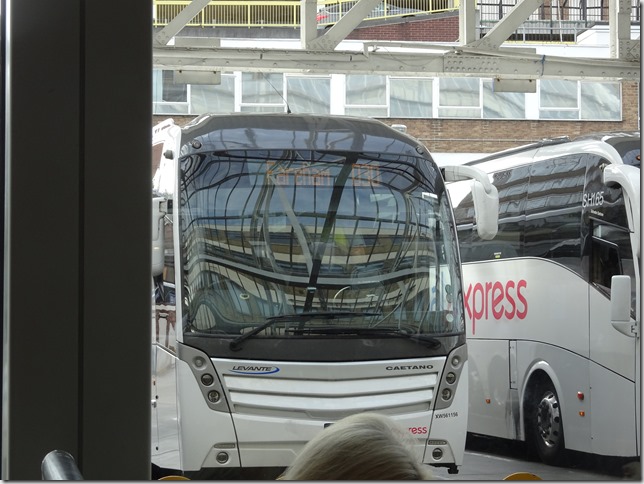 Half the price of the train, just as fast, and far quieter and smoother. Take the National Express Bus and leave the driving to whom ever the driver is. We’ve always taken the train before when traveling outside London, but this time we thought we’d try the bus. 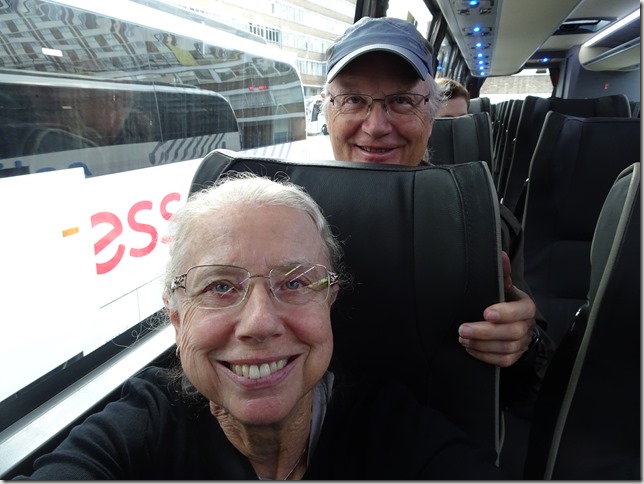 The bus wasn’t even half full, so we both had window seats. Linda’s selfie was photo bomb by some great looking guy. Lucky Linda. 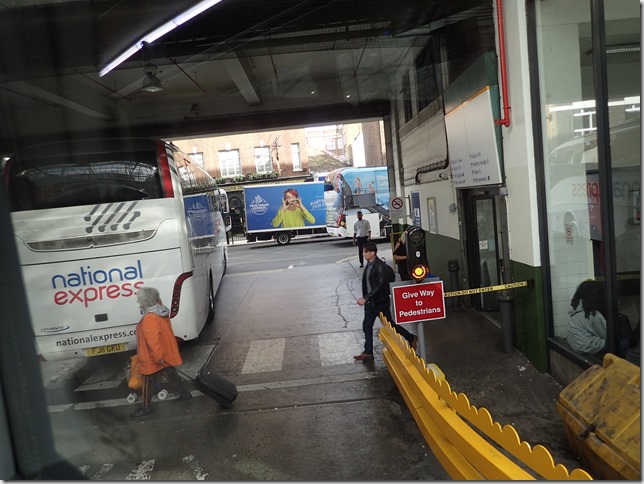 Ms. Snappy Happy was taking photos of everything from the bus. Knowing what’s good for me, I’ll post some of them. Smart Bob. 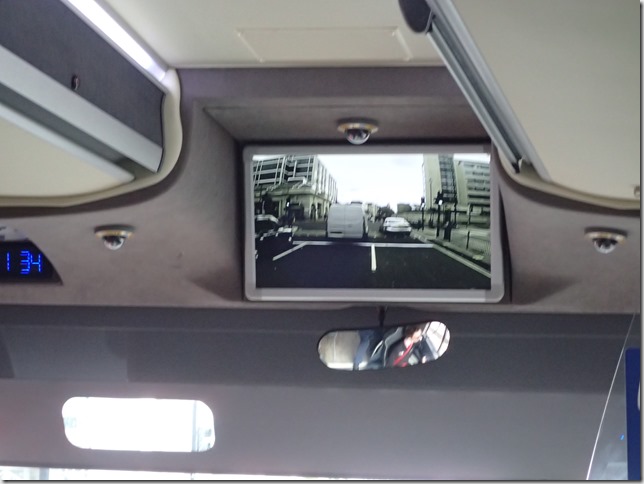 Monitor showing what is ahead of the bus. Don’t ask me. She takes ‘em, I post ‘em. 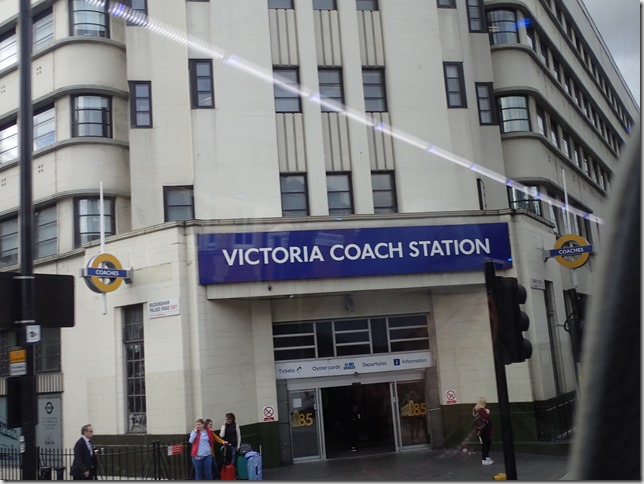 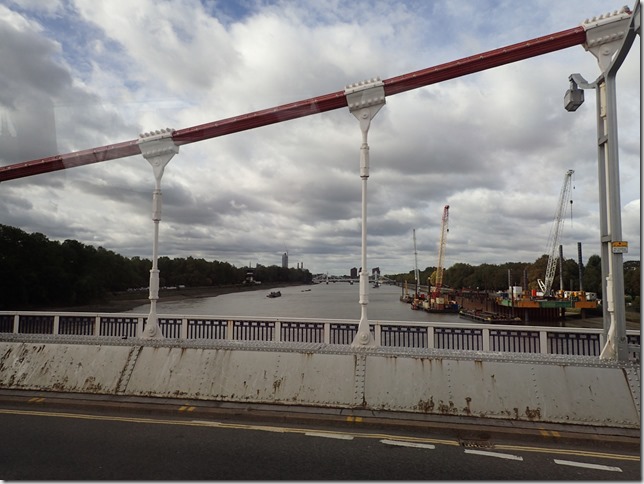 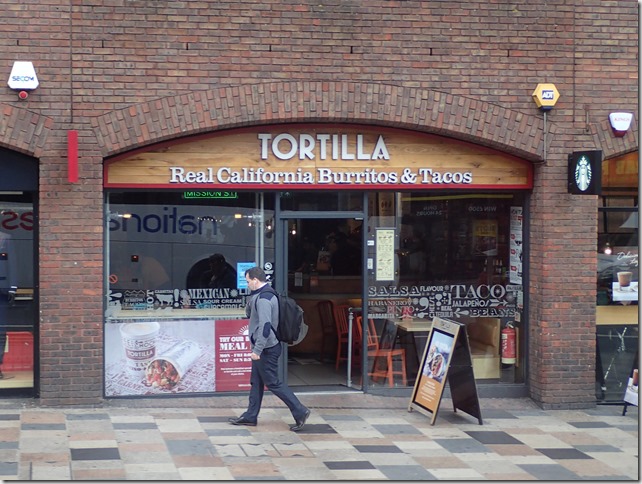 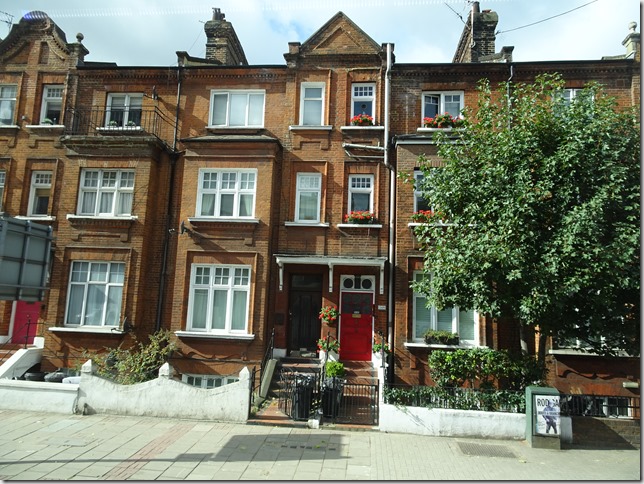 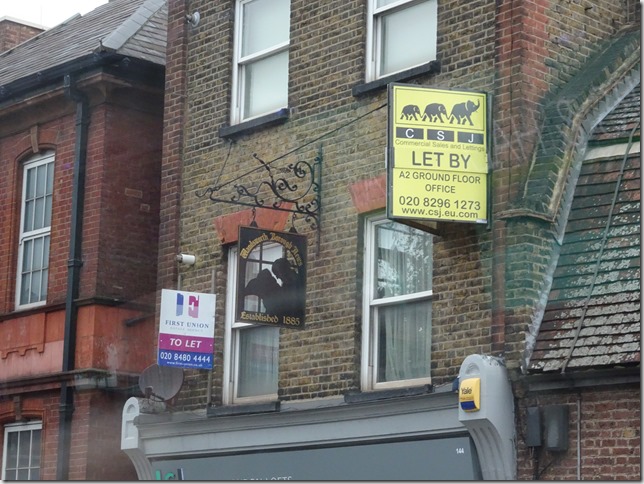 We Rent, they Let, by whatever word you call it, it is the same thing. Another highly artistic and  compositionally perfect photo by Bob. PBB. 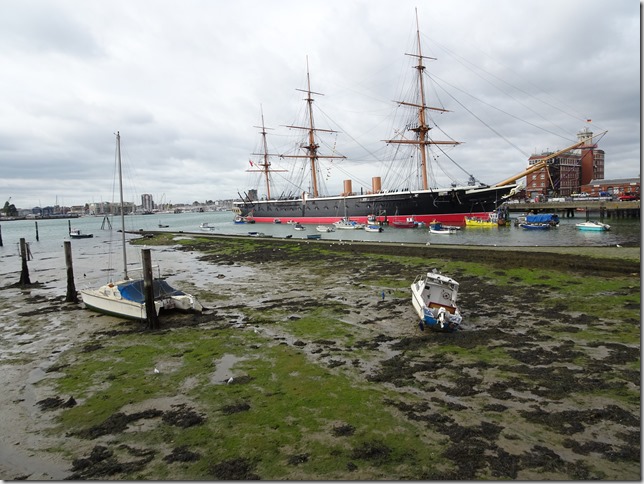 My first look at Portsmouth harbor. It almost looks surreal. It was in 1834 that my 4th great grandparents and their four young daughters, one of whom was 12 year old Mary Ann, sailed out of this harbor to emigrate to America. They settled in the same township in Ohio where I was raised and I am here because of them. Genealogy is far, far more than just names and dates. It is the people who made us who we are. If they hadn’t sailed to America I wouldn’t exist. 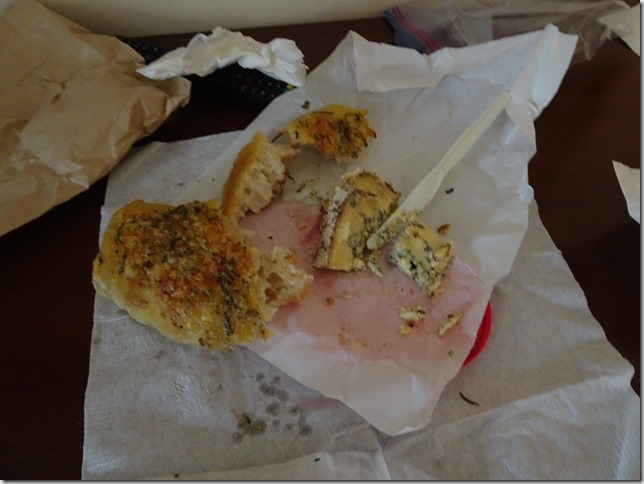 Our bread and cheese snack. It may not look like much, but the taste was out of this world. Oh, and we are staying at The George, the only surviving 18th century public house in Portsmouth. It’s also located very near the gate to the historic Royal Navy Dockyard. Major use of the “G” word coming up over the next three days. Linda is so jealous. I have traced a number of different ancestral lines overseas to the town they came from, while she is yet to trace even one line overseas.  I’m 50% Swiss and most of the rest British Isles, with nice slice of German thrown in for good measure.. 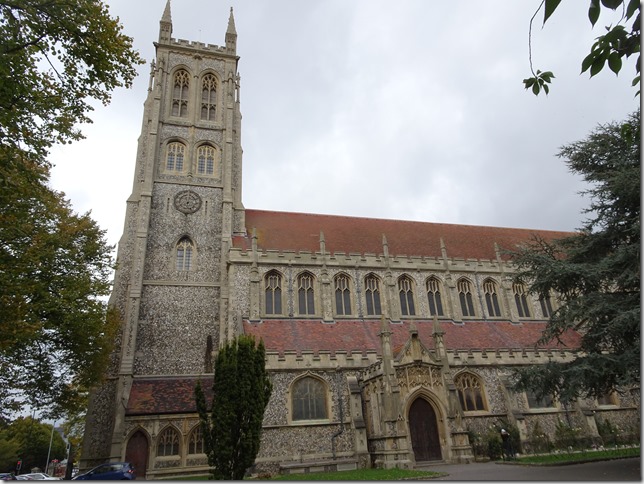 The site of the church (it was rebuilt in 1843 and again in 1877-79) where Henry and Mary Ann Tow were married and their four daughters, Emily, Emma, Mary Ann and Harriet were baptized. It was closed this afternoon, but since it not the one that was here in the 1820’s and 30’s, plus the baptismal font is no longer here either, just being here is more than enough to connect to the past.Happy Bob.

What the church looked like in the early 1800’s. 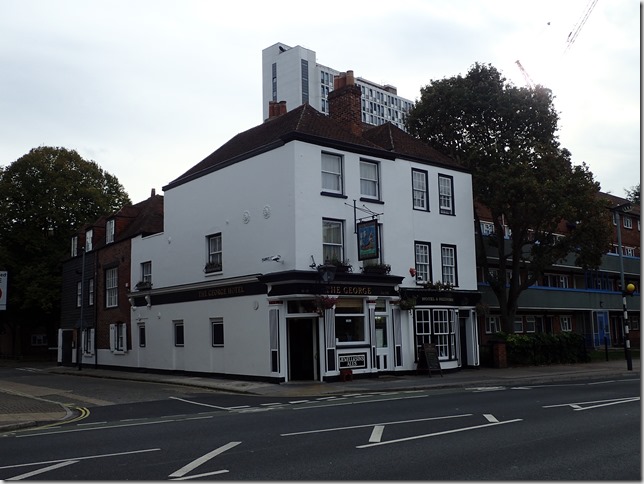 The George where we are staying. 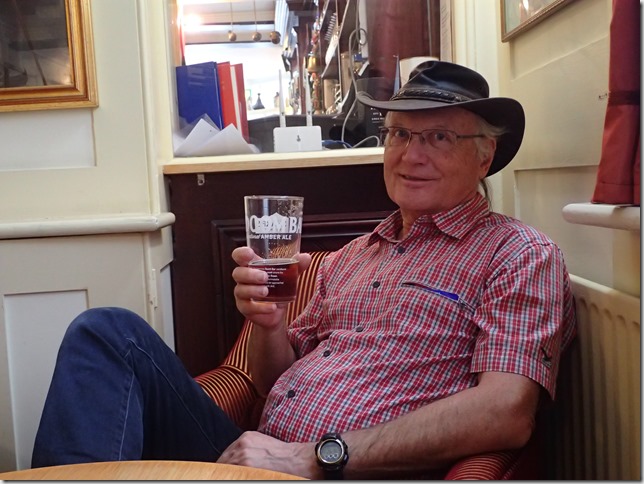 My 4th great grandfather lived not too far away on Mile End..Unfortunately it is also gone, the area being destroyed during the 1940 German bombing raids on the Dockyards and Portsea. He was a sawyer, working  most likely in the Dockyards. It is unlikely, but just possible that he would have at one time or another stopped in at The George for a pint of ale. This one is for you great granddad! Like Linda said, we have no way of knowing, by maybe, just maybe he once sat exactly where I am sitting. Those who have done something like this know the feeling. Those that haven’t, my wish is that someday you may experience this same awesome moment. 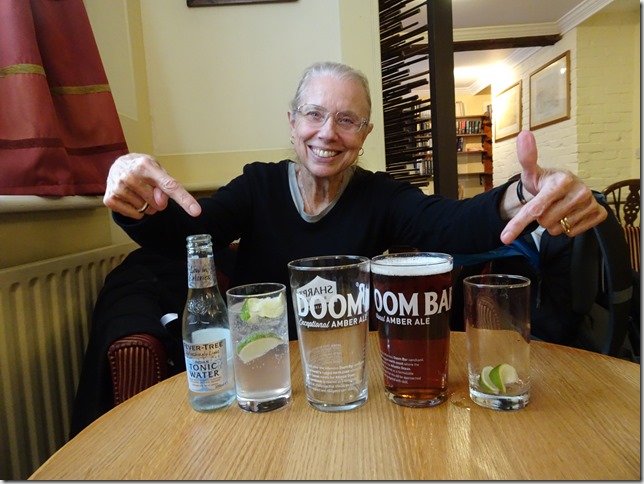 As you can see, Linda was doing her best to keep up with me in the drinking part of the memory. Wonderful Wife. 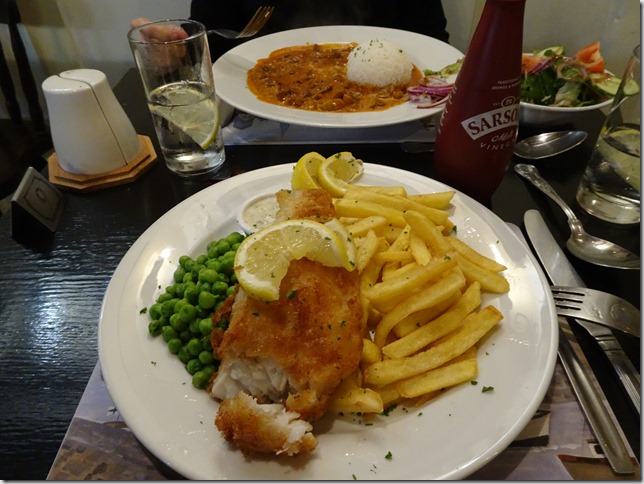 I neglected to post a food photo yesterday, and as you can tell from the fish, I almost forgot to take one today. Good Food. Good Ale, Good Company. Good Memories. Life is indeed Good.