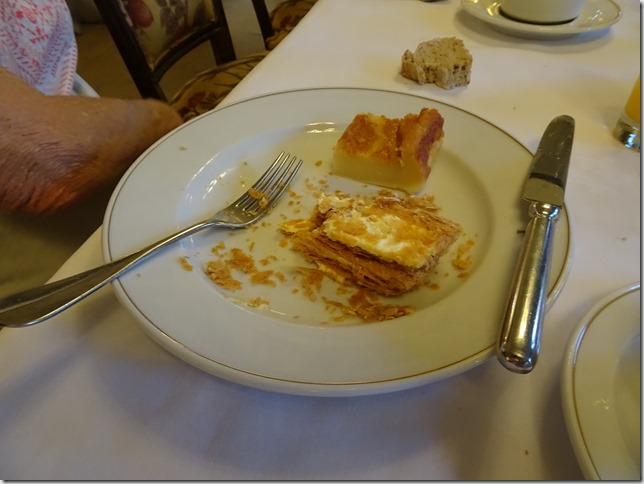 Let’s just say that Linda really, really, really enjoyed the sweet pastries that came with breakfast, and leave it at that. Sweet Bob. 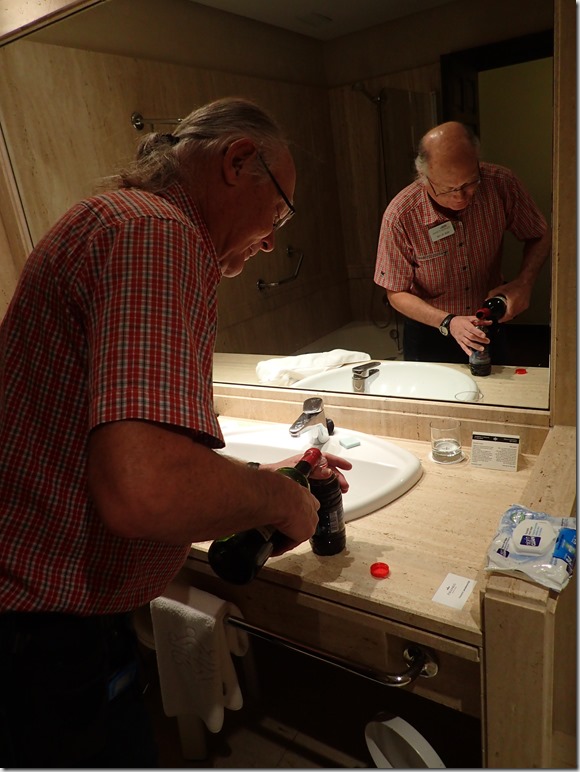 The amount of wine in my suitcase keeps increasing daily. It was rime to start transferring wine from glass bottles into plastic bottles. Water bottles with screw caps work very nicely. 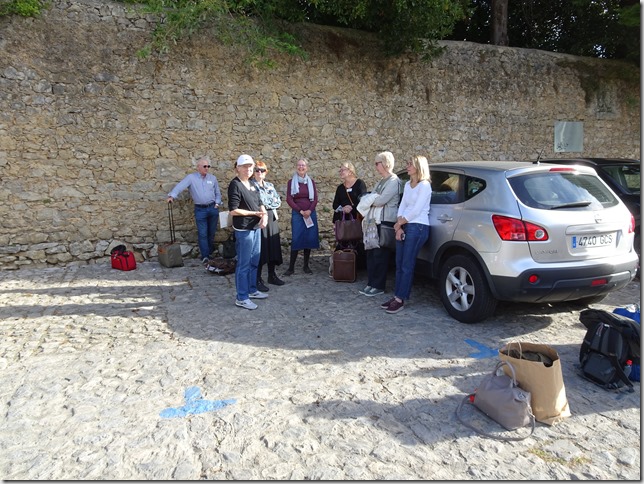 This was not a normal tour day. There was a cave tour, if you wanted wet and slippery, low ceiling height so you were always bent over and very limited group size so you would have to wait several hours either before or after the tour. We decided we had seen enough cave paintings, so would pass and travel directly to Bilboa.

That sounded good, at least until arriving at the parking lot a the bottom of the hill after the long walk, there was no bus ready to take us. After a lengthy wait it was determined the bus had left with our luggage and without any of us. He was already over a half hour away, so it was way more than an hour until he returned to add we passengers to our baggage. No one was happy about that. It was hot and miserable waiting and we stood the entire time. Unhappy Bob. 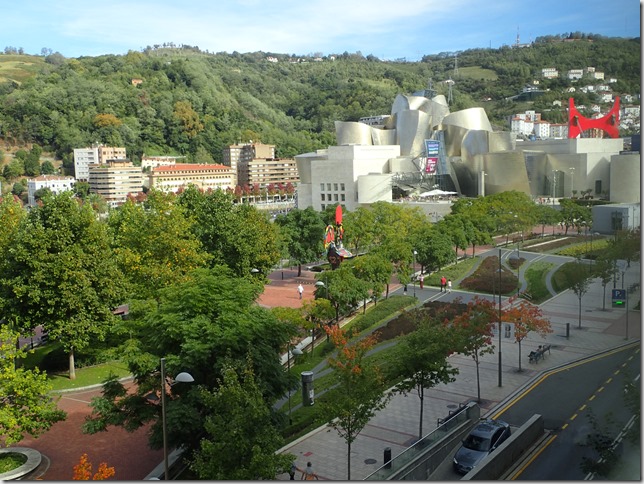 The photo is a view of the Guggenheim Museum from our hotel room. 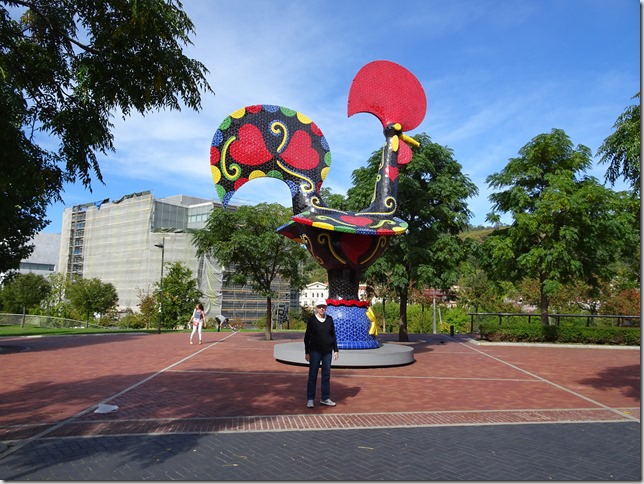 After we were in the Guggenheim I asked Linda about what part of Guggenheim and modern art did she not know. I got the death stare, and the, “How was I to know”, answer from her. Luckily I didn’t say anything like “Everyone knows the Guggenheim is about modern art”, or I am sure I wouldn’t be any condition be writing this post. She did love this Chicken Sculpture, which was part of the Guggenheim collection, but it pretty much went downhill for her from there. Thank goodness I know when to say nothing. Silent Bob. 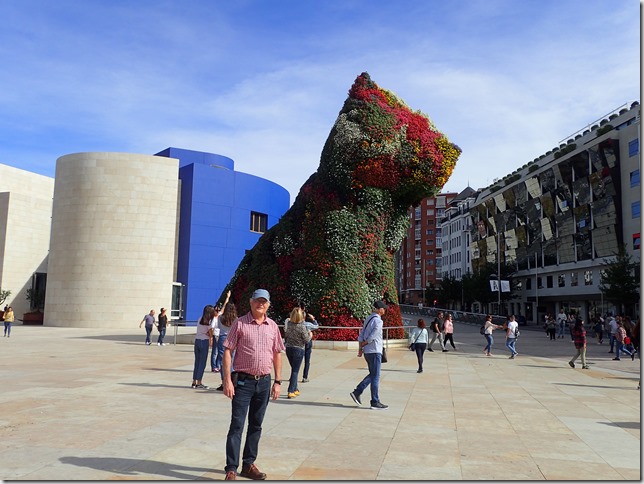 The Guggenheim says it’s a pup. Linda says it’s a giant flower sculpture of a cat.  Bob says if it meows, purrs and Linda says it’s a cat, it is a cat. Though I must say that the only people who could look at this and say it is a pup and not a cat are the same people who could look a giant canvas hanging in the museum that is one shade of yellow on top and an another shade of yellow on the bottom and call it a masterpiece. Which is exactly what it is called. 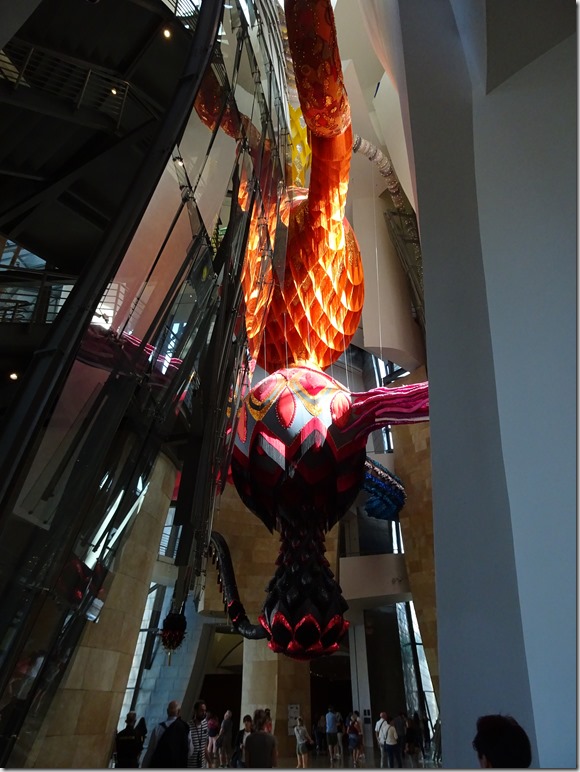 No photos were allowed in the museum. except for all the usual Chinese tourists. We decided to join them. It’s stories tall, goes all over the place actually and was something we found interesting. We also loved the French Impressionist pieces. The rest of the museum, there were moments of awesome sculptures, but the paintings? Just not our cup of mouthwash. 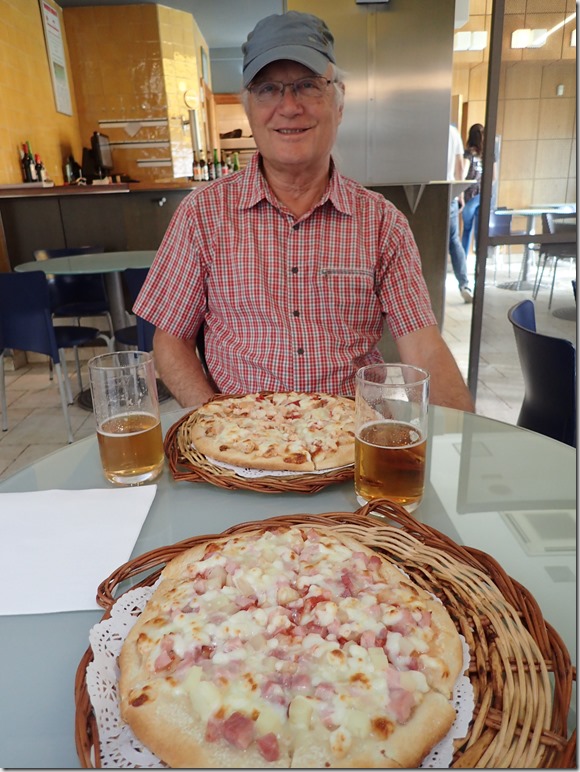 After our time in the museum, all we could stomach for dinner was a pizza and beer. Lovers of modern art we ain’t.

Not my usual post, but then neither was it a usual day.