Yes, I acknowledge being many days behind in my writing. There were simply not enough hours in the day to see and assimilate, have time for myself, and then write. This is being written on the 15th, a week late, as we enjoy Germany, so hopefully I can write two posts each day until I am caught up. Hopeful but Doubtful Bob

I will also try to post which sites we saw each day, as it is possible you may want to visit them. Looking back, this was the best and the most tiring tour we have ever done, but was nothing short of awesome. There were tour members who have taught this their whole lives, but were now having their first opportunity to actually see the art work. It was nothing less than a fantastic group of fellow travelers. Many kudos to Roger Parks for suggesting we would enjoy a Nat Geo tour. 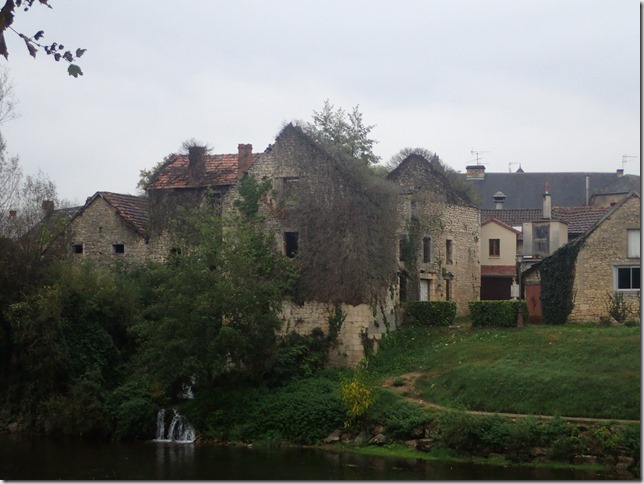 It rained all last night, the water pouring into the river just made this photo. This town is Montignac and the hotel we are at is Hotel la Roseraie right on the river. 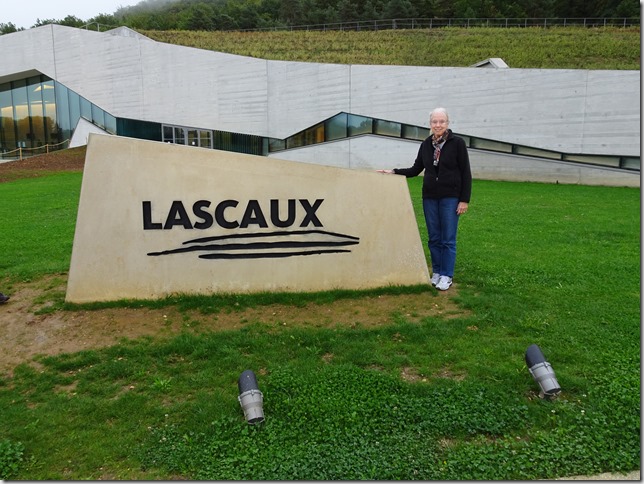 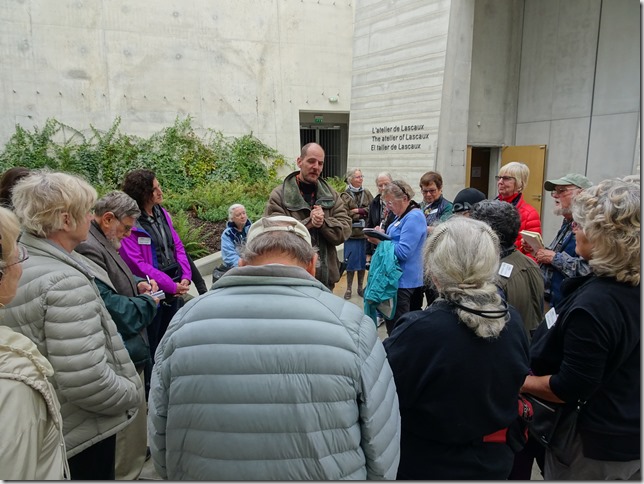 I know you want to see the cave paintings, but this says volumes about our group. There are at lest four people in the group taking notes of what our guide is saying.  In other tours we have taken there would be some people of looking at what they could buy (the shoppers), others would be off taking photos (the photographers), and others just walking about (the tourists). Here, everyone is listening, and yes I was taking a photo, but only because I had in mind what I just wrote. Good Bob. 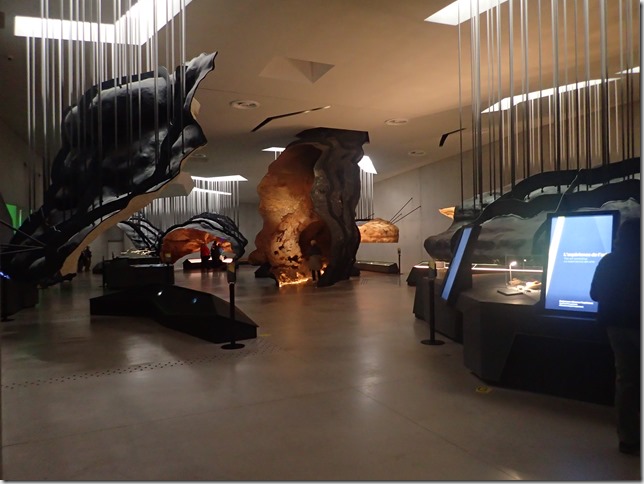 In the actual reproduced cave no photos are allowed as the group is give a set amount of time to to go through it. But once completed, there is a “workshop” area where sections of the paintings are displayed and what might be called, “the attack of the cameras” takes place. 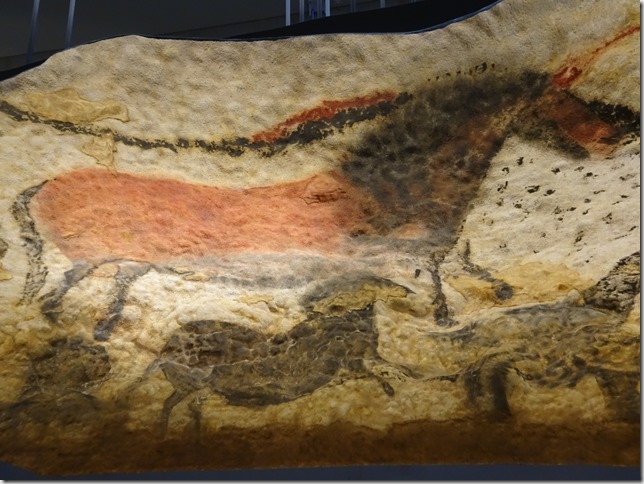 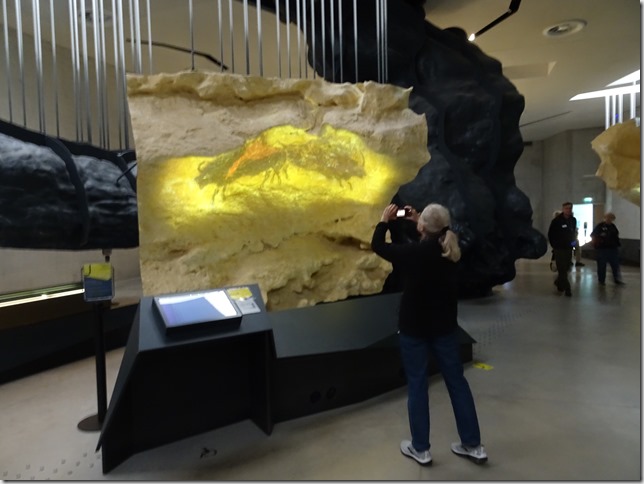 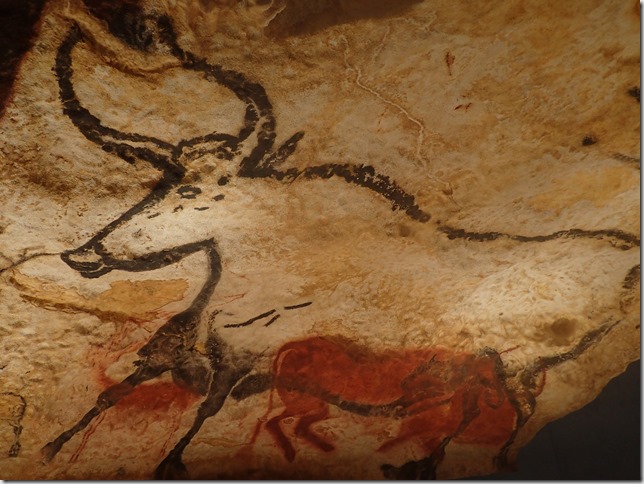 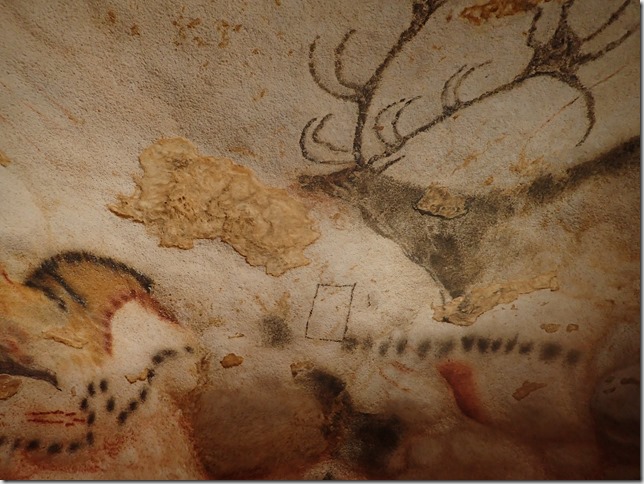 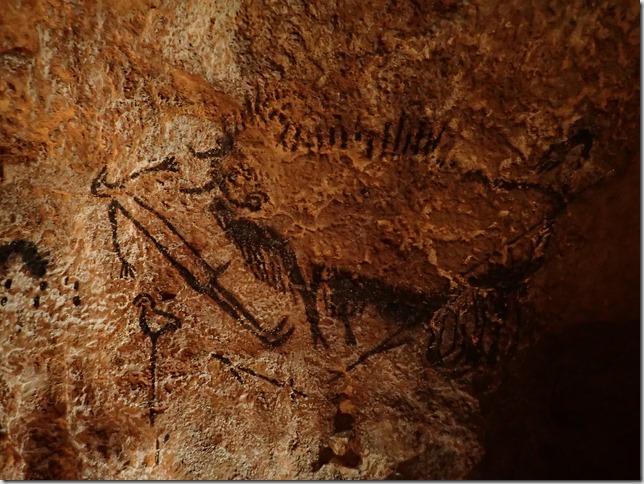 Bison, note the long hair because of the cold temperatures, bird and stick figure, the only human like figure in the cave. 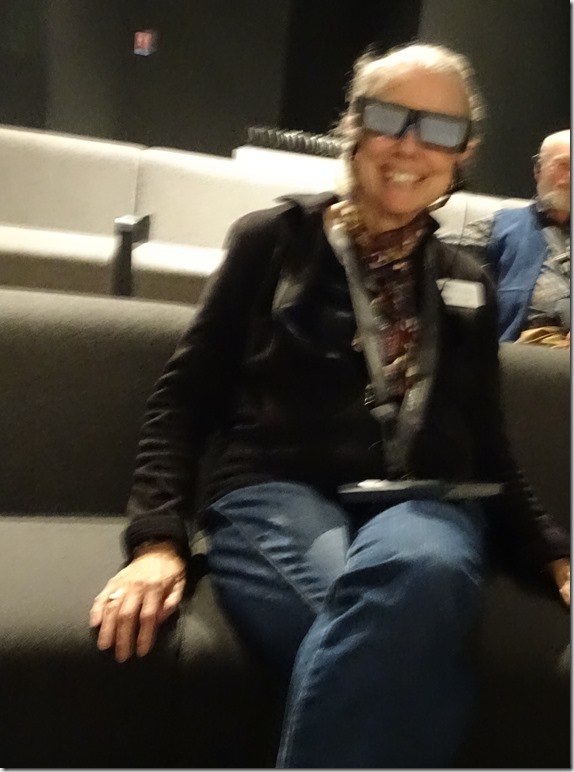 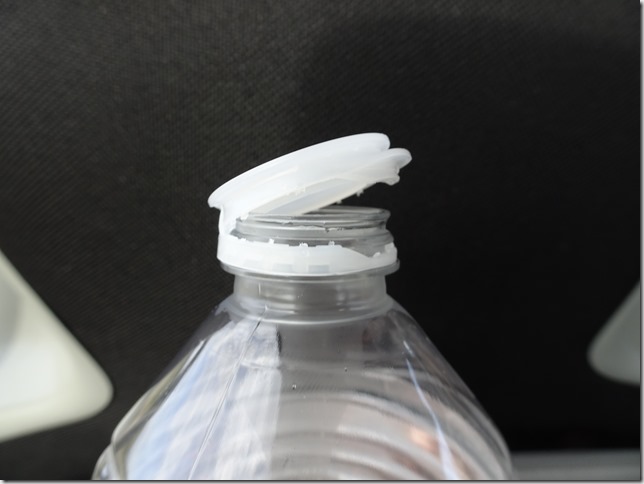 Flip top cap on water bottle that uses a fraction of the plastic the lids on our water bottles use. And it works just as well. Gotta use all that plastic or our economy will collapse. 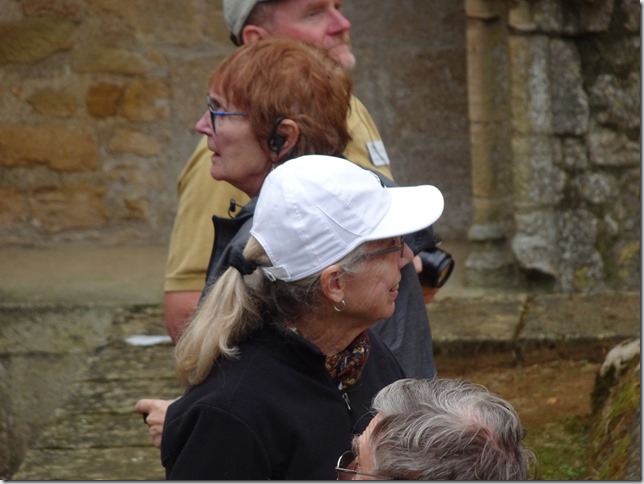 Divided attention during the tour of the town of Sarlat. 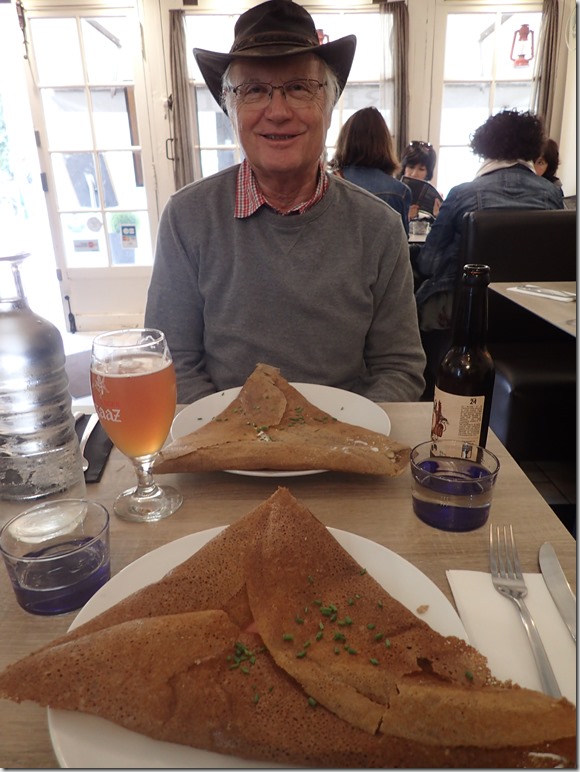 All attention here on the beer and gallette. It had been too long since we had these. Happy Bob and Linda. 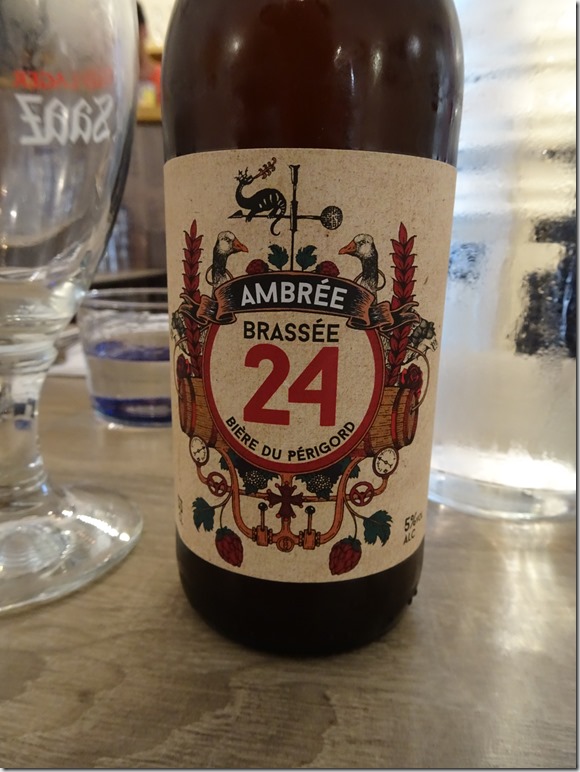 Excellent, bottled but local. Local is always the best choice even if bottled, and bottled is what it usually is in the smaller towns. 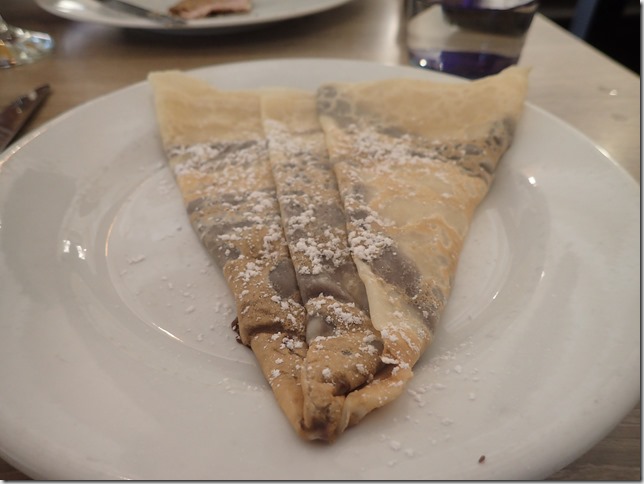 Nutella crepe for dessert. Linda never leaves a creperie without having one. Smart Linda. Smiling Bob. 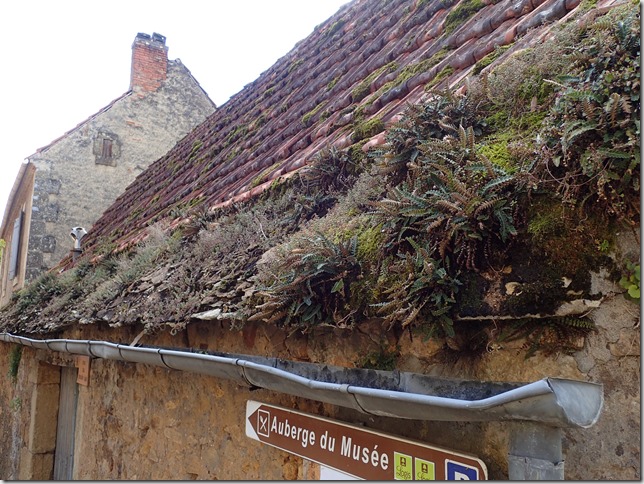 One of those only Linda knows why she took it photos. 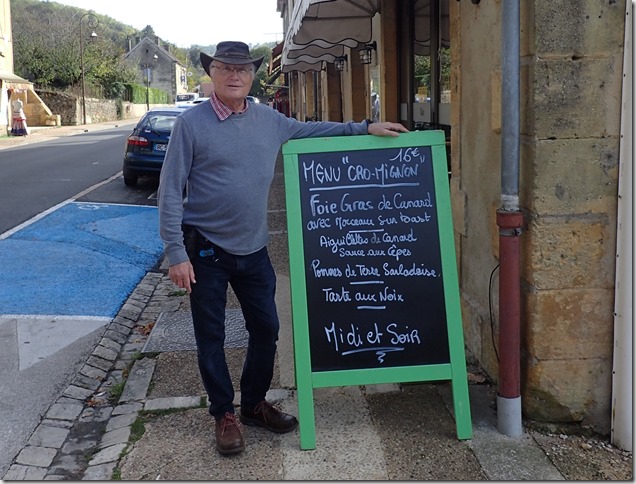 Les Eyzies where the Cro-Magnon man was found. This one is for Roger Norris. 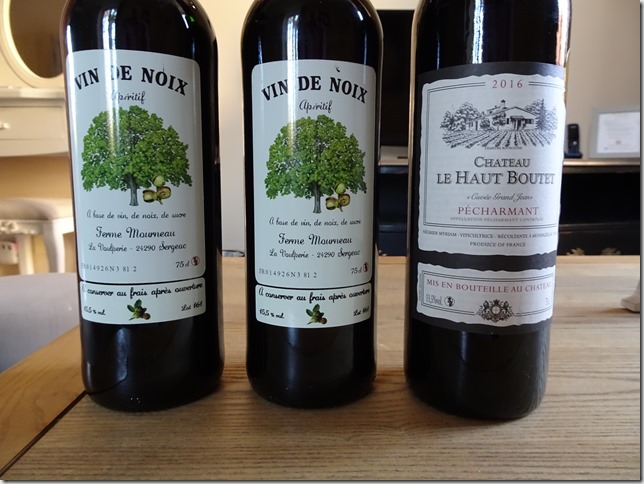 I doubt any of this will make it home, but we shall see. But let it be known Linda loves the walnut wine, that’s why she got two bottles to my one. Mine may just be the best red I’ve ever had, even considering the one’s we’ve made. No way is mine making it home. 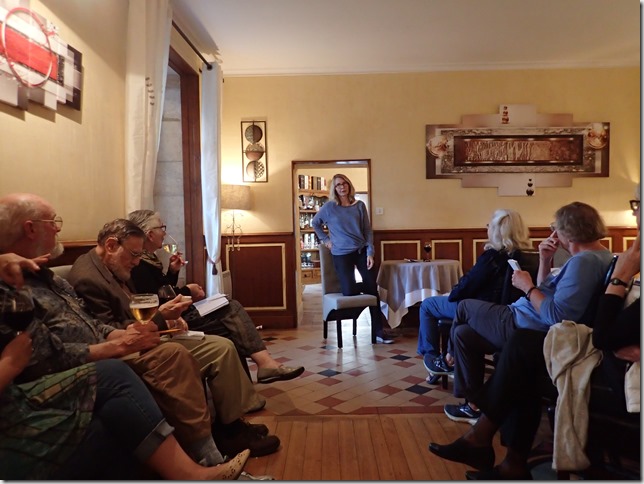 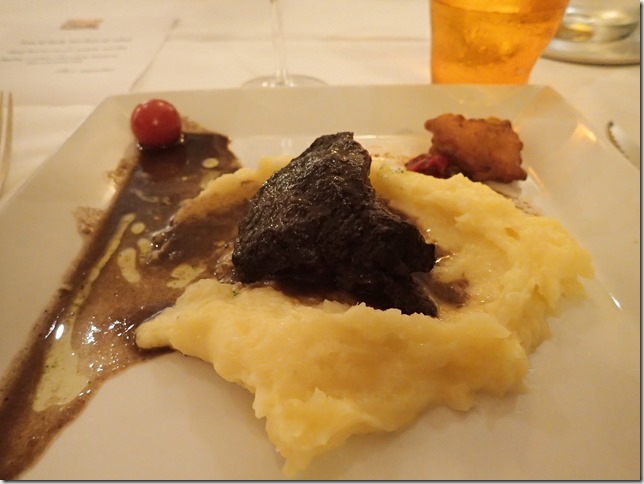 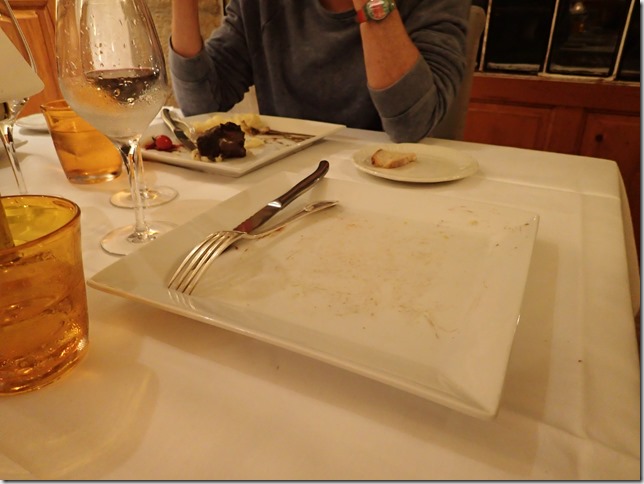 My plate after main course. Another great day comes to an end.