It is our last full day in London, so our day is not the usual, nor is it the unusual. It’s just us doing some things we enjoy doing. Monday is a no matinee theater day. We try not to go to the theater on our last evening in tow as we are too keyed up afterwards. 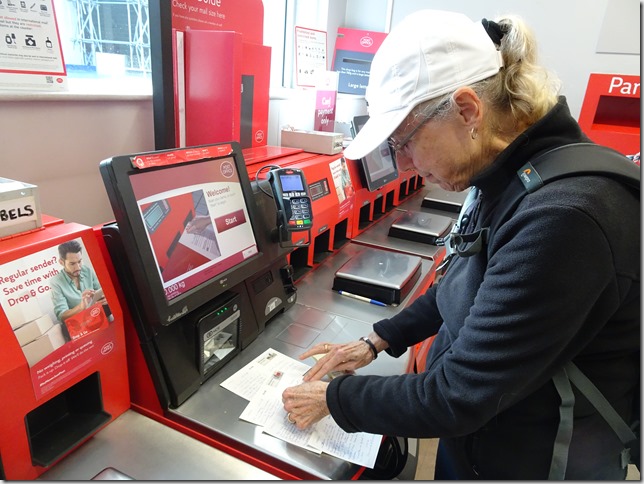 She who rules my Life (Lucky Bob), said we were going to the Post Office first thing this morning. As it was nearing time to leave I noted that on the desk in the room was what she was going to mail. Four blank post cards to be sent to our grandchildren, or should I say Grandadults? Anyway, very delicately I broach the subject of the unwritten cards to her, and soon she was busy writing. I think I scored major points for that. Bighearted Bob.

The post office was all self serve. Our problem was we couldn’t find where to put the money in the machine. It was right at the front of it. All we had to do was to look down to see it, Duh! Dumb Bob. 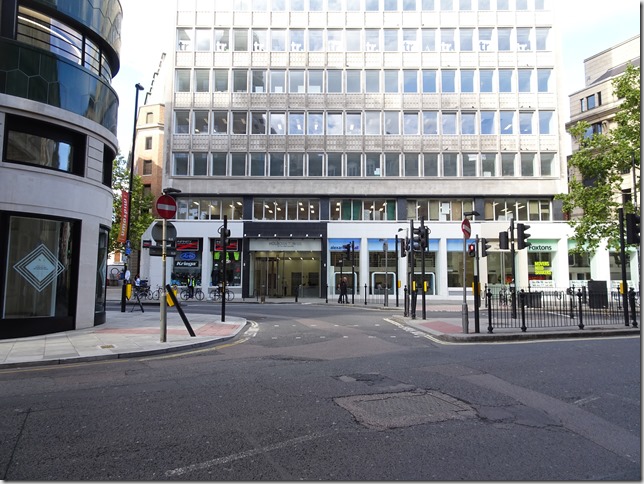 Did you know they don’t have a self serve copy machine in every store in England the way they do in the states.We did find one, but it wasn’t here. 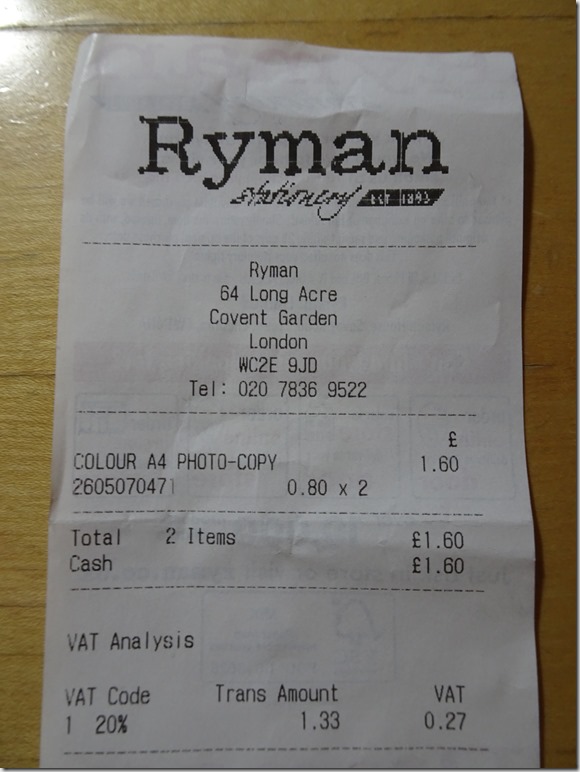 Ryman Stationary has store all over, and in them is a self serve copy machine. Our train tickets for France are copied, the cost £1.60 if we hadn’t printed it out it would have been €5 for each of the tickets. The other nice thing was that just a few steps away was an entrance to a tube station. It’s the one at Covent Garden when the way you go up and down is via elevator.

Then it was off for a walk along the south bank of the Thames, another thing we do every tip to London. What follows are a few, well maybe more than just a few, photos of what we saw and experienced. 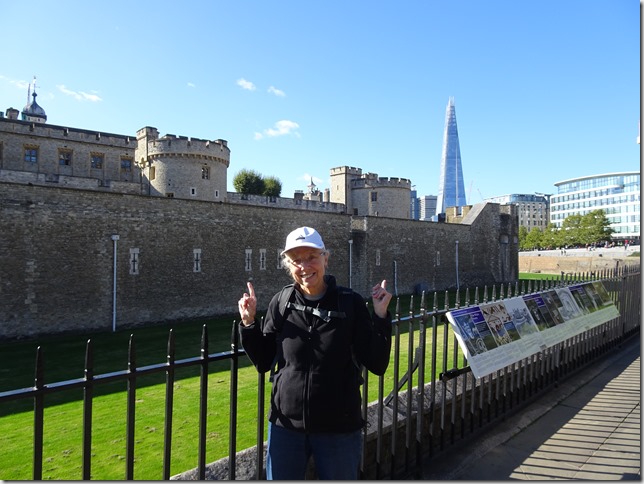 Linda pointing to the Tower of London and The Shard. 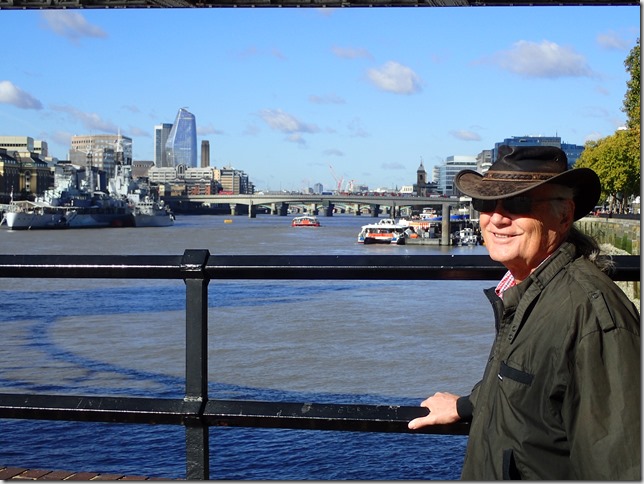 Stop! I want to take your picture. Stop right there. No! Move to the left. Not your left, my left. That’s no good, move to the right, YOUR RIGHT!! Tip your head,up. That’s to far tip it down. Not that far down. Smile! Now you can see why I prefer to take the photos rather be in them. 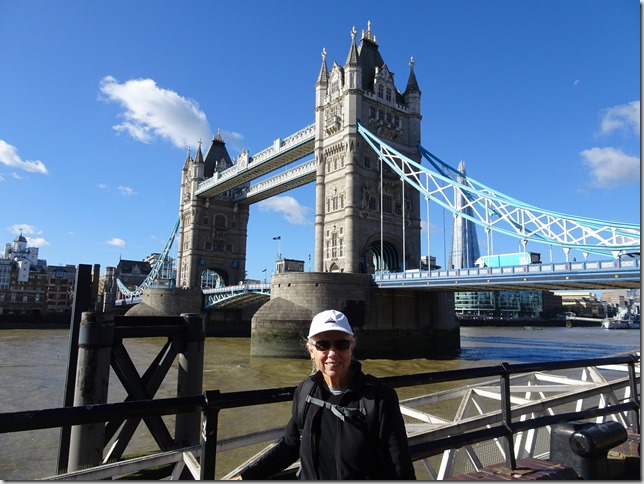 No trip to London is complete without a photo of you and the Tower Bridge. 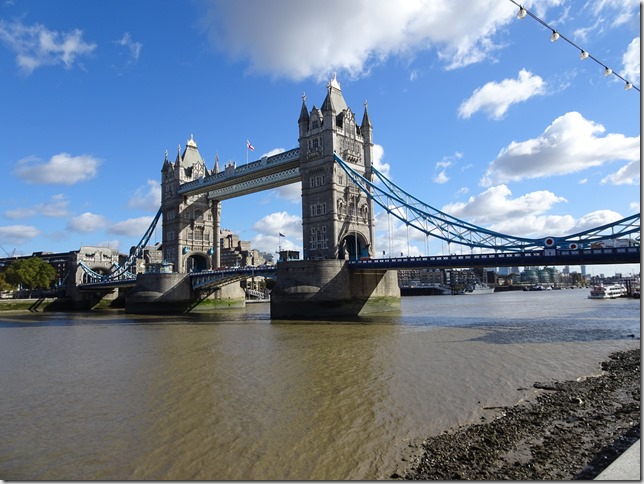 Or just a photo of the Tower Bridge.FYI, Linda calculated it is now 124 years old. 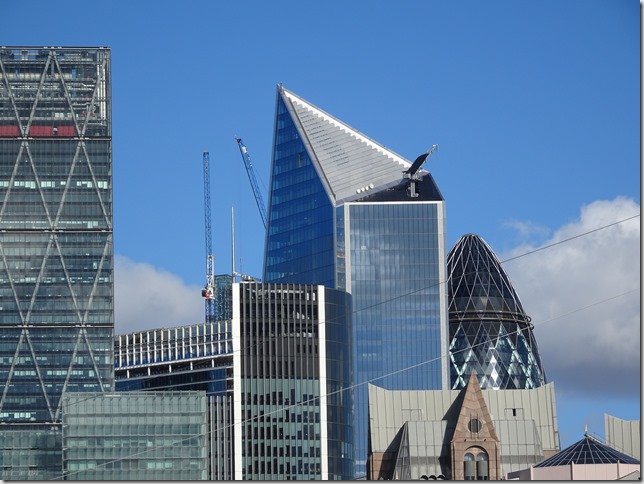 Linda calls it the “Flip Top” building.Works for me. That’s the top of the Gherkin just to the right of it. 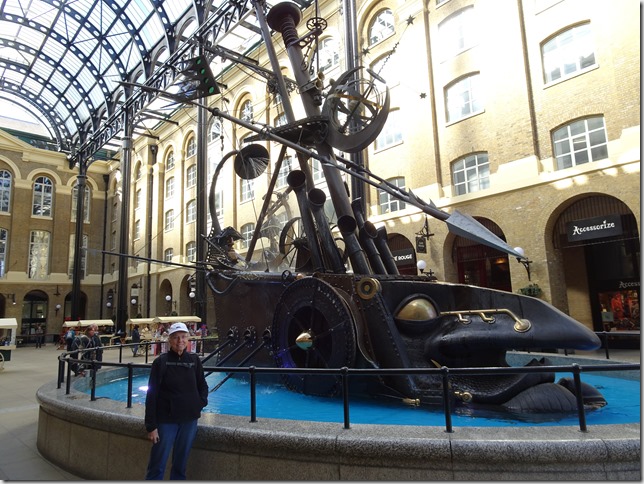 Another south side must see. The What Is It at the Hays Wharf. In the 1800’s there would have been a clipper ship docked here with a load of tea and spices from China. What a difference a century makes. 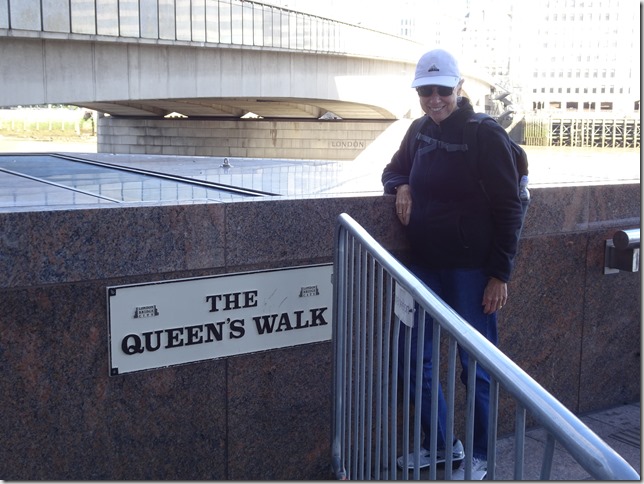 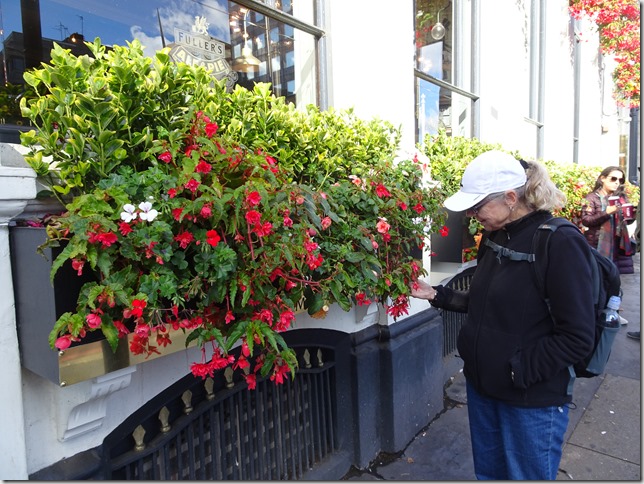 Pretty Flowers, Pretty Girl. The best of both worlds. 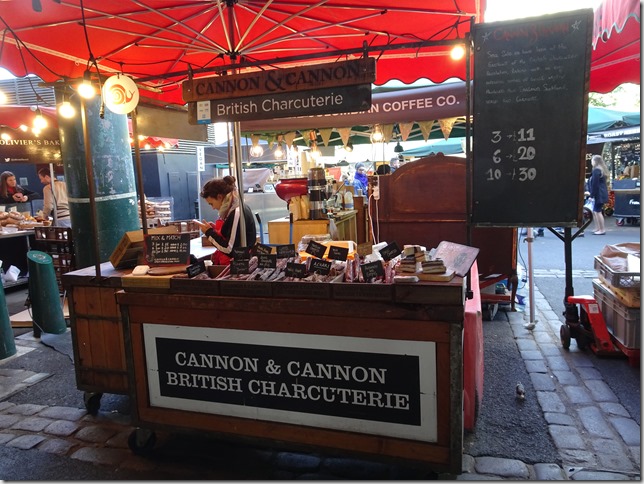 Outdoor market under the elevated tracks. Very similar to the market near our apartment during our last stay in Paris. 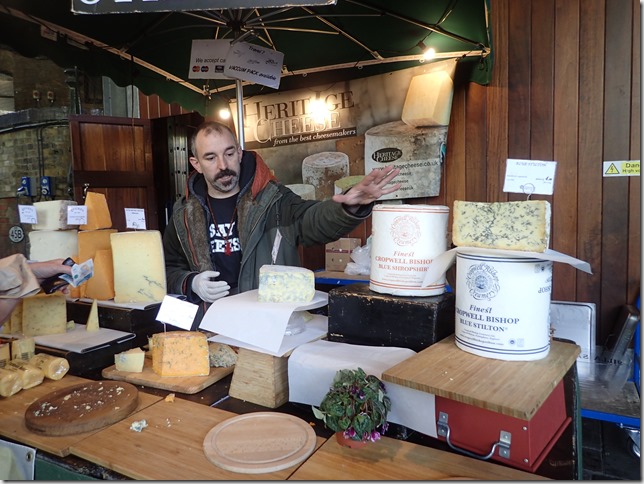 The cheese on the far right side is Stilton Blue. Part of it is now in our room as I write this. The seller was really neat. He was out of samples, but told us that to really experience the fun of buying top grade stilton blue you had to first taste it. It was far, far beyond any stilton blue we have ever bought in the states. He then went on to explain that there were different grades of stilton cheese and this was the top grade. To which we could only be wobble head nodders agreeing with him. The true joy of travel. But now totally ruined for any other stilton blue. Still another reason to return to England. 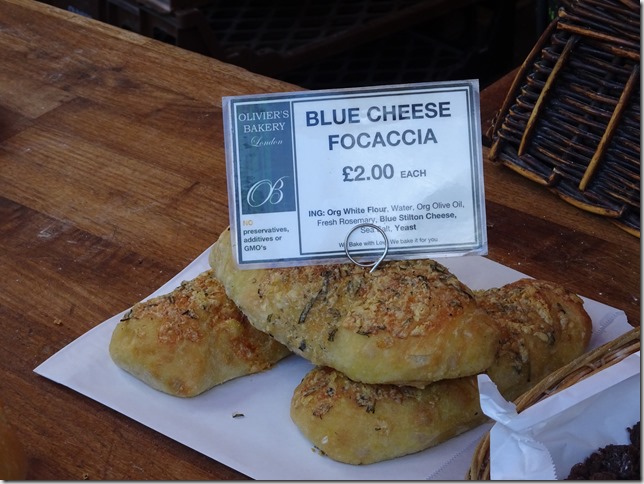 Sometimes I think Linda just wanders around these markets. Not this one. Once we had the cheese she was off to where she had seen these loaves of focaccia. Do you get the idea she likes blue cheese? Thank goodness my Swiss side were cheesemakers, otherwise I’d of lost her years ago. Lucky Bob. 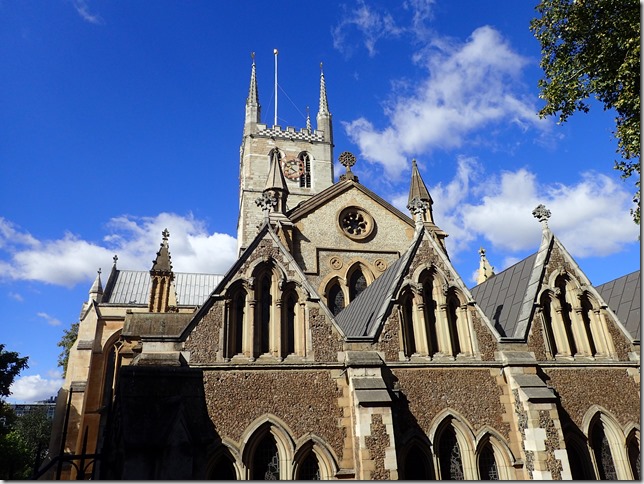 We’ve been to London at least five times, and this is our shortest stay. The photo Linda took brought back memories of a very cold November Sunday morning when we attended a church service in this cathedral. It’s Southwark Cathedral if you’re interested.

A plaque located nearby tells the story of its beginnings many centuries ago. when, before the building of London Bridge, a ferry ran between the two banks of the River Thames.

The man responsible for the ferry was John Overs, a “notorious miser”, who decided to save money by feigning his death and thus plunging his household into mourning, saving that day’s provisions. As one may imagine, however, Overs was not a popular man and his servants, instead of fasting in their mourning, held a feast in celebration of his death.

In rage, the old master leapt out of his bed and a servant, terrified and imaging some sort of demonic manifestation, struck him fatally with an oar on the head.

Overs’ daughter, Mary, sent for her lover so that he may come and together with her claim her father’s inheritance but such was his haste, he fell from his horse and broke his neck. So overcome was Mary by her misfortunes that she founded a convent into which she subsequently retire, and that eventually became what today is known as southwark Cathedral. 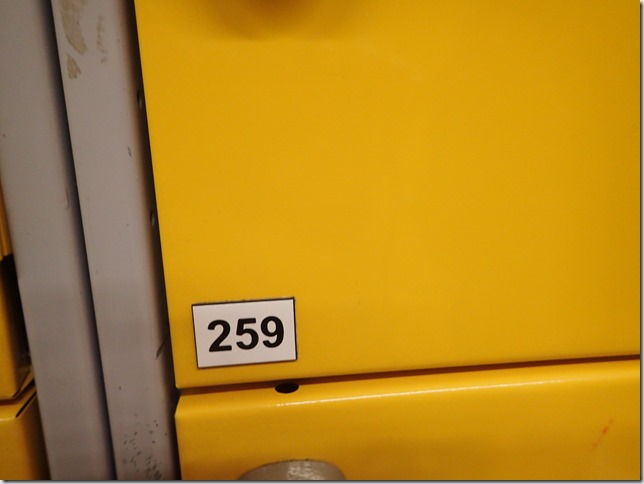 Since everyone knows what the British Library looks like, and you aren't allowed to take photos in the Sir John Ritblat Gallery where all the historical documents are on display,(unless you’re a Chinese tourist), I  thought I’d post a photo of something different., one of the numbers on the free lockers where you can leave your backpack or other items. Actually Linda took this photo so could remember where she left her daypack, but since I have posted so few of her photos today I thought I would post it as an example of her creativity. Bad Bob. 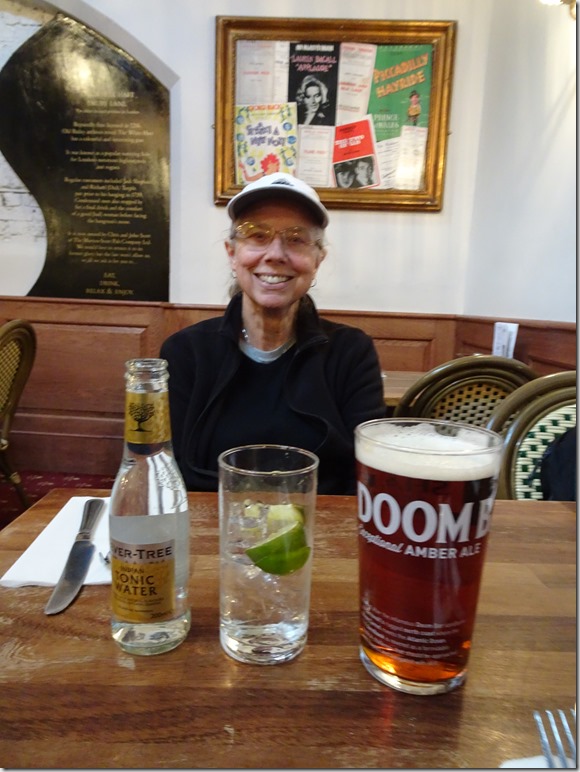 Now that you’re done thinking that that last photo by Linda didn’t warrant a Bad Bob, I’ll give you a real Bad Bob. She approved this one. 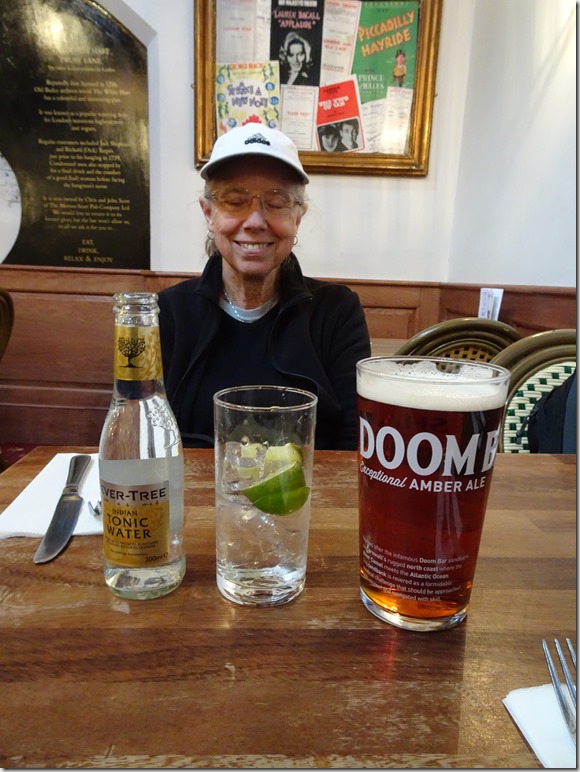 She didn’t approve this one. Now that’s what it means to be “BAD BOB”. 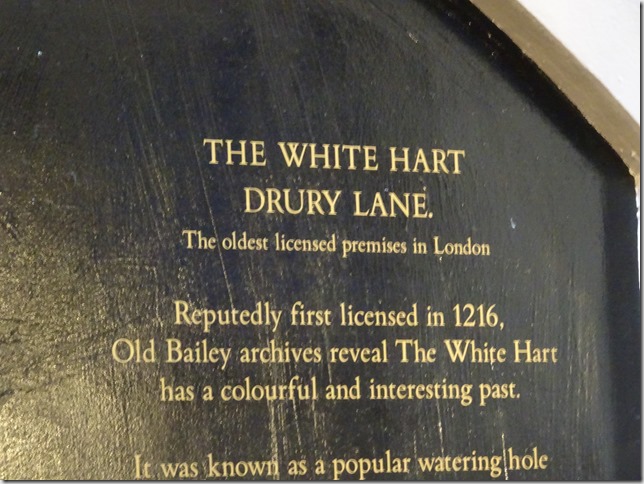 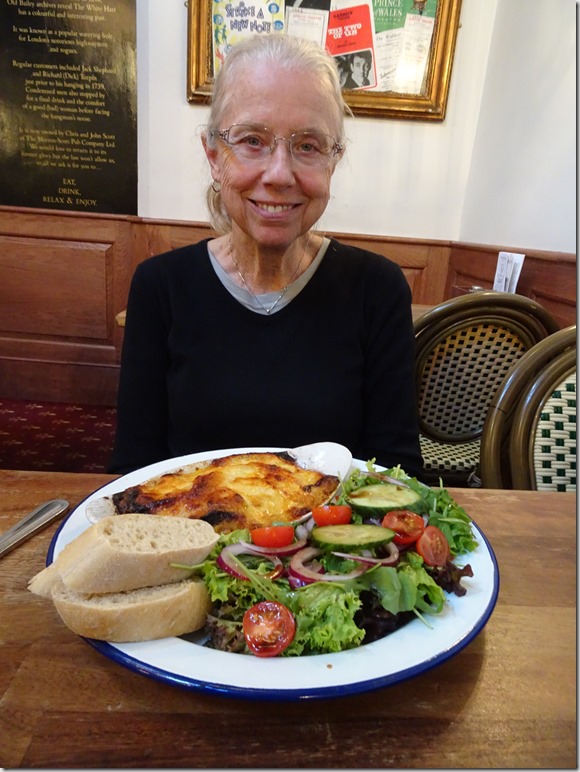 That clown outfit may call their food a happy meal, but I’ll tell you, by the look on this beauty’s face, this is a real happy meal. 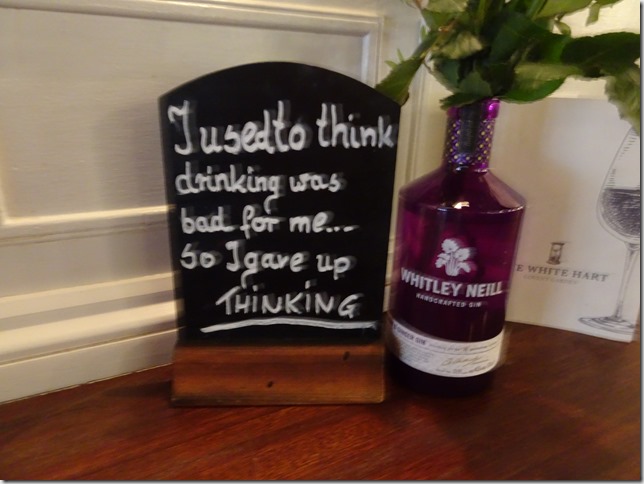 Think of it as the thought for the day. Tomorrow we leave for Portsmouth and further adventures. And just to warn Roger, the “G” word might find it’s way into posts from Portsmouth. You have been warned.