Ms. Healthy Food and Mr. Fish Food ate their last breakfast in Oslo this morning and we even had something new. The orange colored drink in the shot glasses was definitely a 5 star health drink. Take some carrot juice and load it down with grated fresh ginger that real puts a zing to it and you absolutely have a winner. I suspect this will show up occasionally in the morning after we return home. Just another reason to travel. 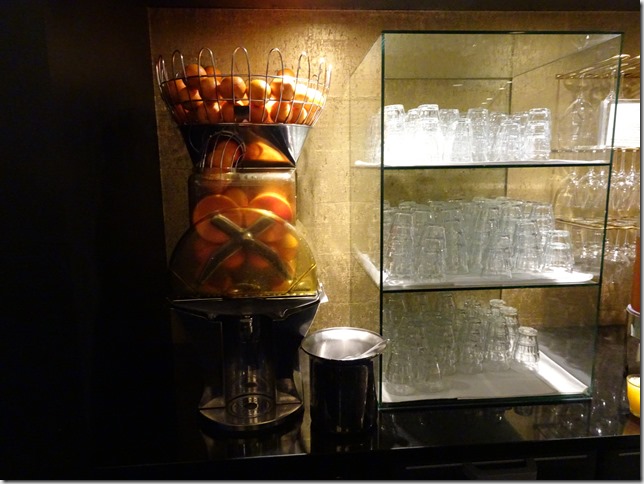 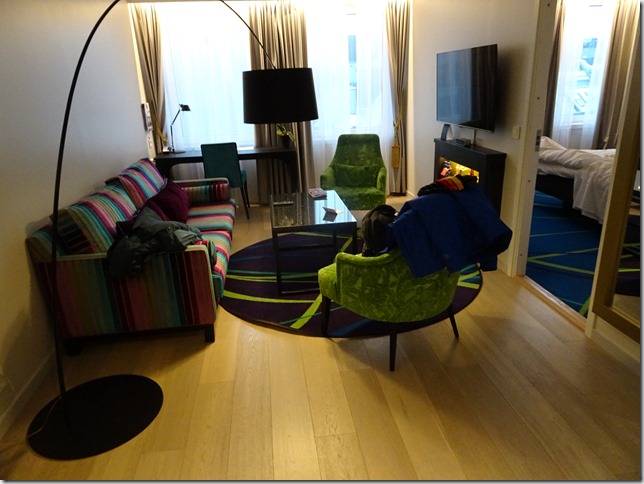 We know where we’ll stay if we ever get back to Oslo again, one of these rooms at the Thon Hotel Rozencrantz. 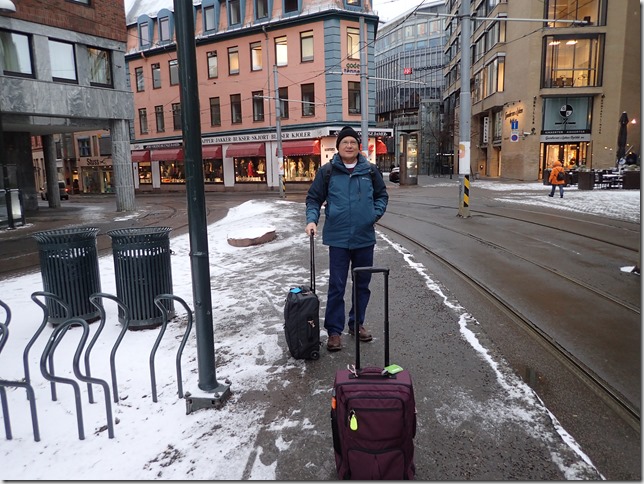 Tram stop directly in front of the hotel. It had snowed some overnight and heavier snow was forecast during the day. Looks like we are leaving just a day or two early, but the odds are we will see plenty of it on the train ride to Bergen. 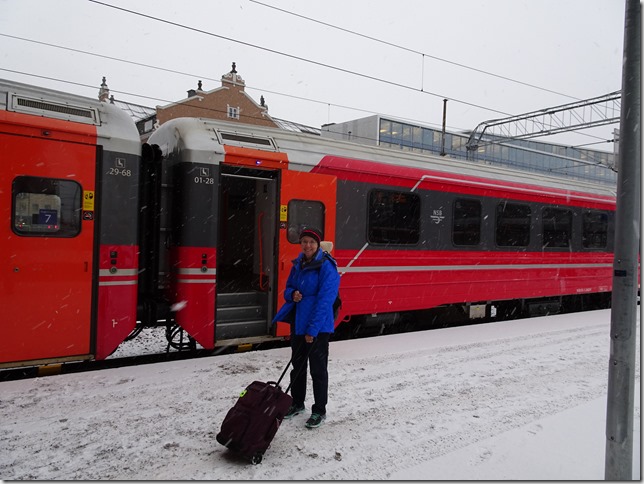 Of course our car would be at the very end of the train. Linda was behind me as we made the long walk to the far end of the platform, and when she finally made it, she wasn’t very happy. The wheels of her pull along suitcase had iced up and stopped rolling. No problem with the snow as it slid as easy as it rolled, but she was worried there was some other problem with them and they wouldn’t roll anymore. My offer to carry it for her the rest of the trip if necessary was all it took to get her smiling again. Happy Linda. 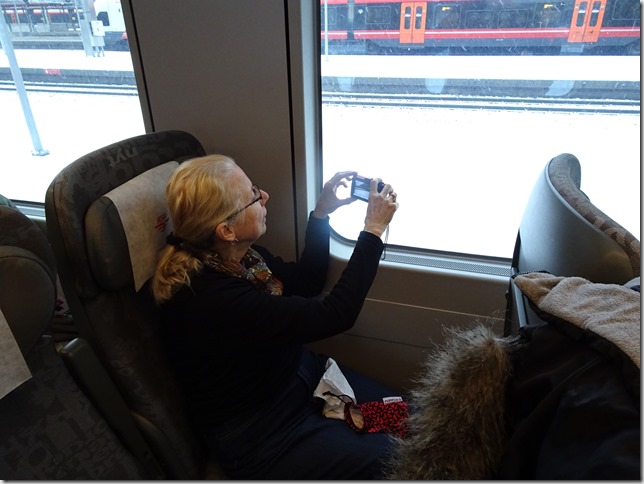 A premonition of things to come. We hadn’t even left the station and Linda was busy snapping pictures. What follows is a infinitesimal selection from the photos she took. 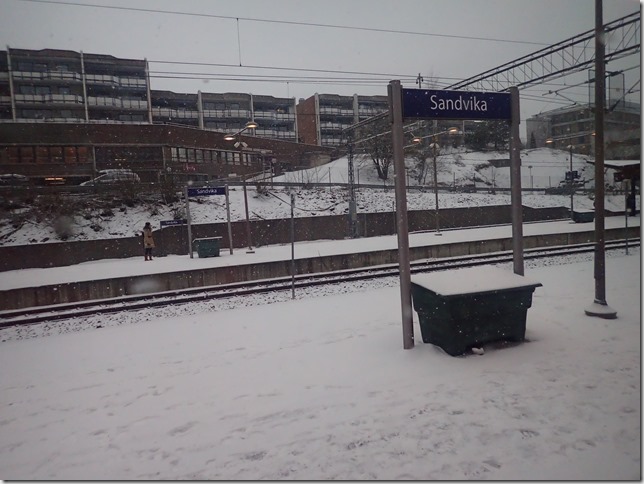 The outskirts of Oslo. She took it for: the snow, the sign, the lone person on the platform? I don’t have a clue. 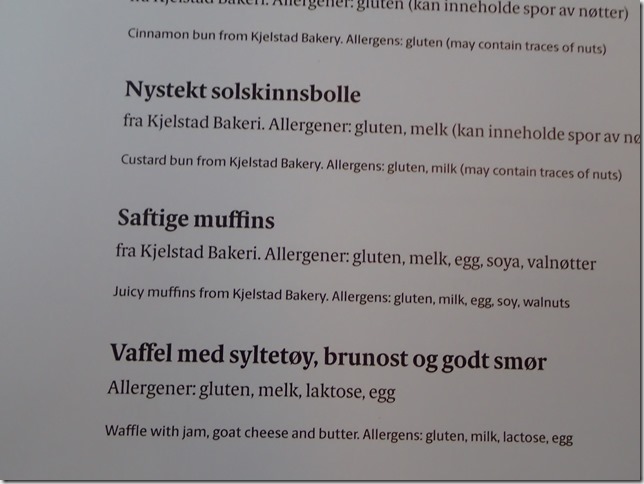 She was laughing at this so I know why she took it. As to why she was laughing, note the first word of the English description for the Saftige muffins. Maybe they are moist? 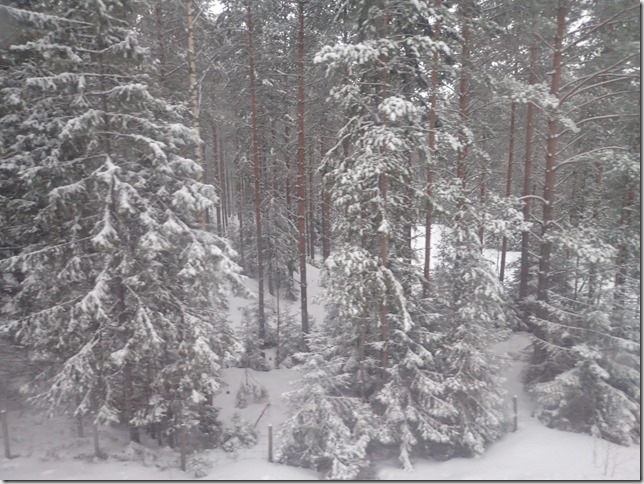 There are several dozen photos of trees covered in snow. I’ll take pity on you readers and show just this one. 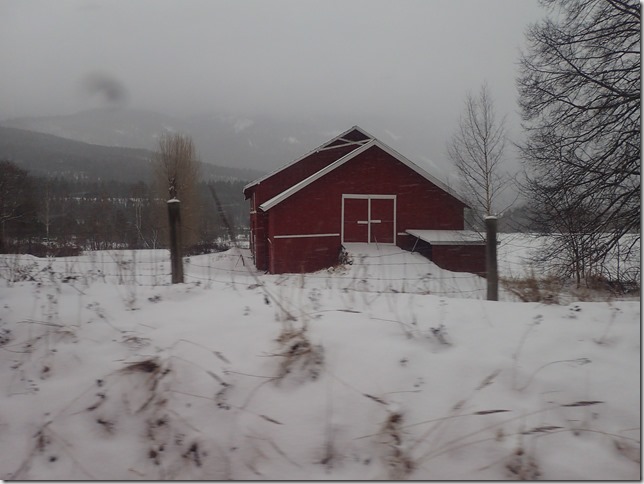 One of the reasons we came to Norway now. Linda wanted to see the red barns and outbuildings in the snow. I counted 17 different red buildings she took photos of.. 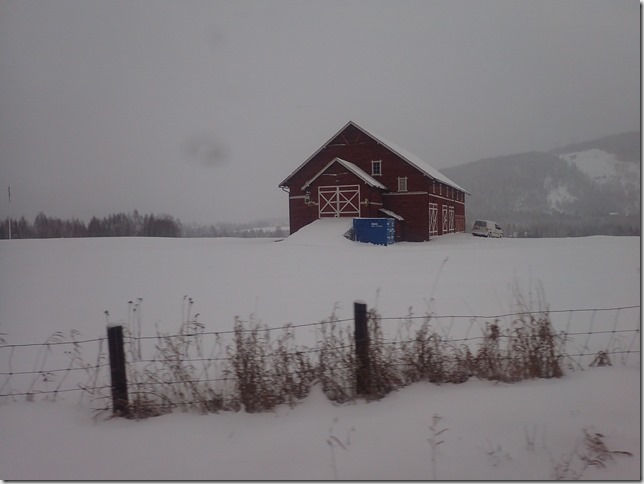 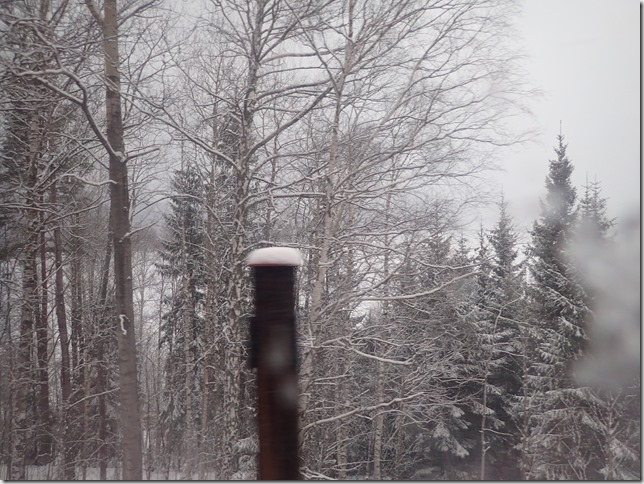 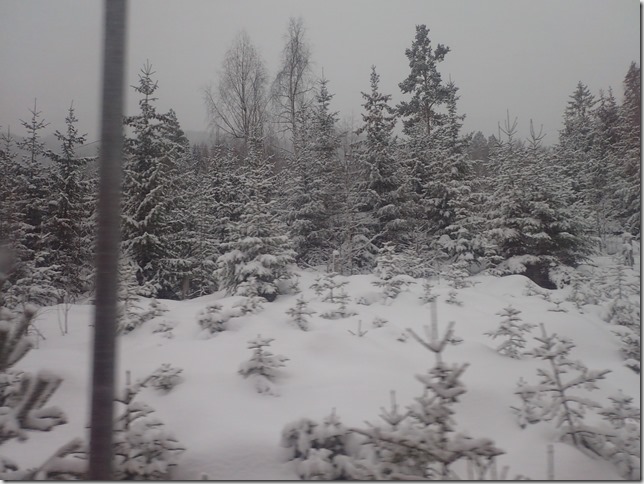 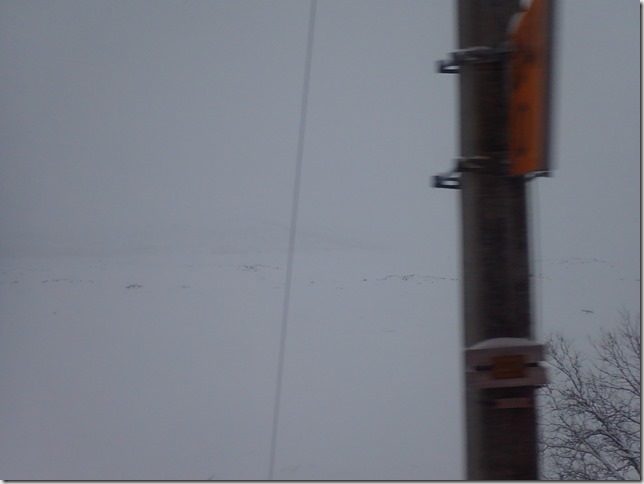 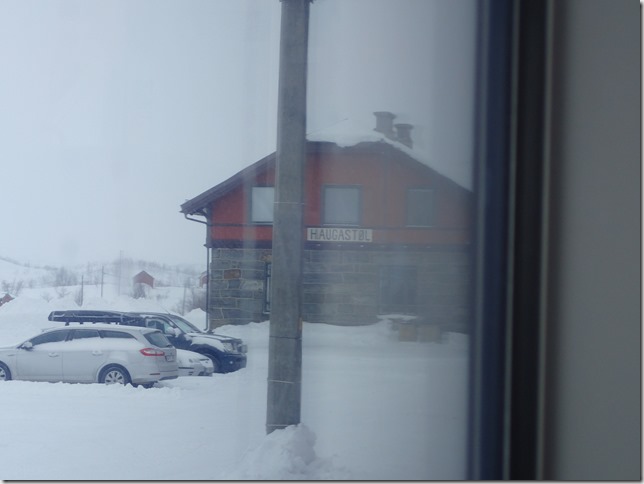 I call them pole and post photos. I don’t know how she does it and neither does she, but it there is a pole or post anywhere near when she is taking photos from a moving vehicle the pole or post will invariably find its way into her photo. This is where I might say something about the photographer being as dumb smart pretty as a post, but valuing my life, I won’t say anything. Smart Bob. 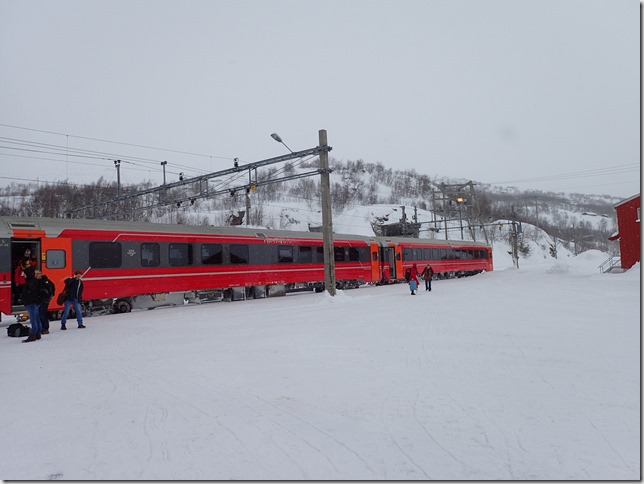 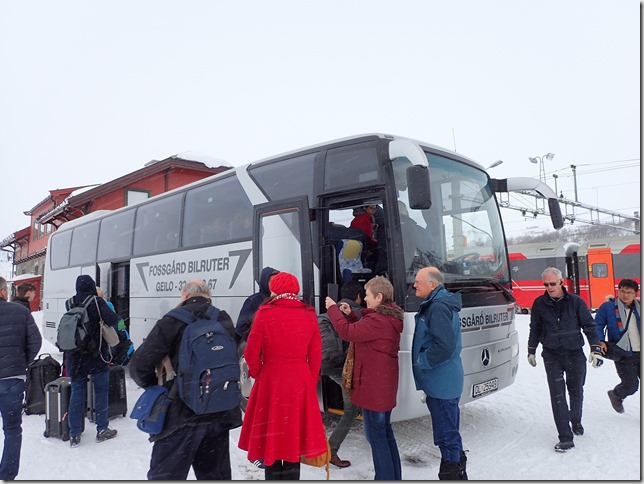 This is called changing our expectations. No scenic boat ride today. The funny thing is that when we were on the tour of Norway in 2014 there was a road blockage that prevented our bus from getting to the same boat. Twice now we’ve tried to cruise this fjiord and both times we came away empty. As Linda said, it just wasn’t meant to be. 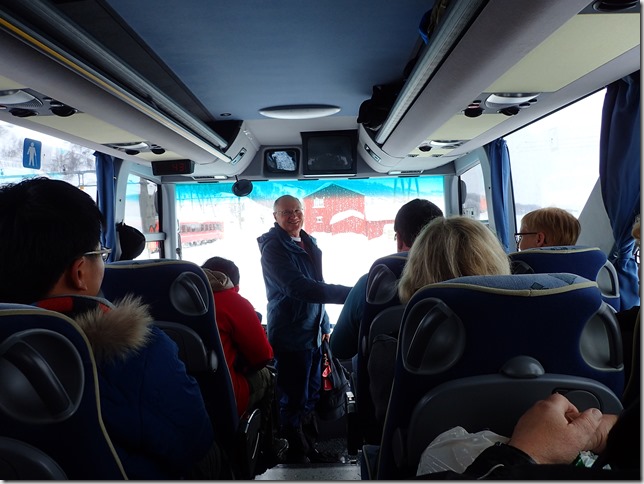 Talk about being lucky, They stopped letting people on the bus just as I stepped aboard after Linda. There was only one seat left, the jump seat, aka, the best seat in the bus. From the not so good to the definitely lucky. 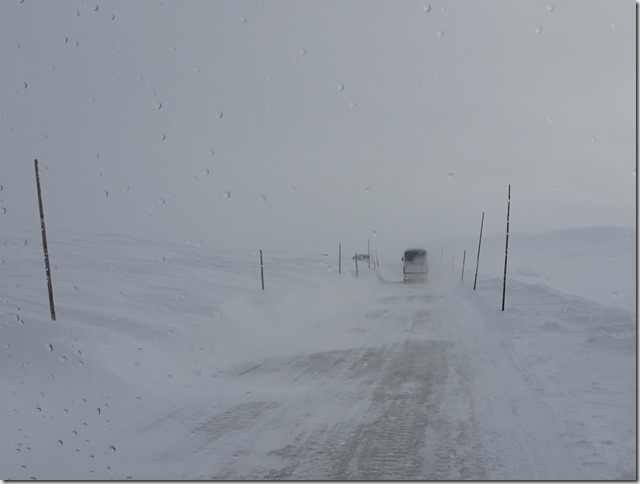 There were three buses. We were on the highest mountain in Norway. All traffic on this road was led in a convoy by a snowplow in front and another behind. Sitting right up front as we drove many, many miles in exactly this I learned exactly what the term, snow blindness, means. 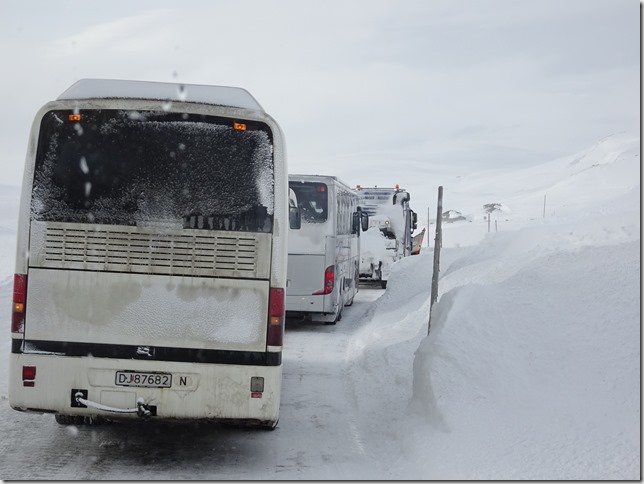 Like I said in the first paragraph of this post. It may not go your way, but it does make for a good story. 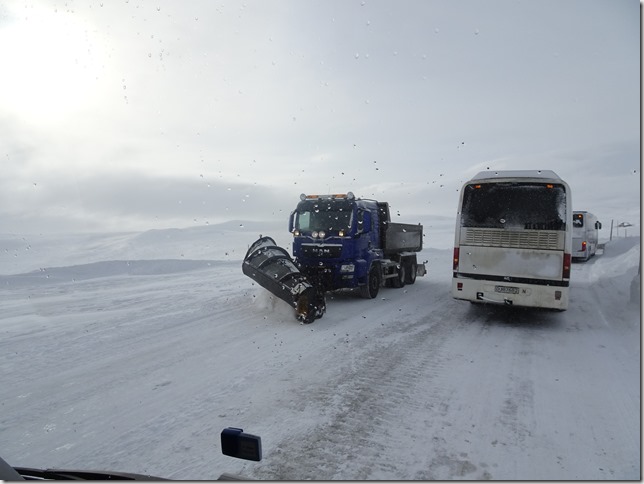 Miles and miles on 40 km/h travel. I asked the driver if they have special tires on the buses and he said no, the same tires summer and winter. There really wasn’t any ice on the road, just packed snow with an occasion bare wind swept area. 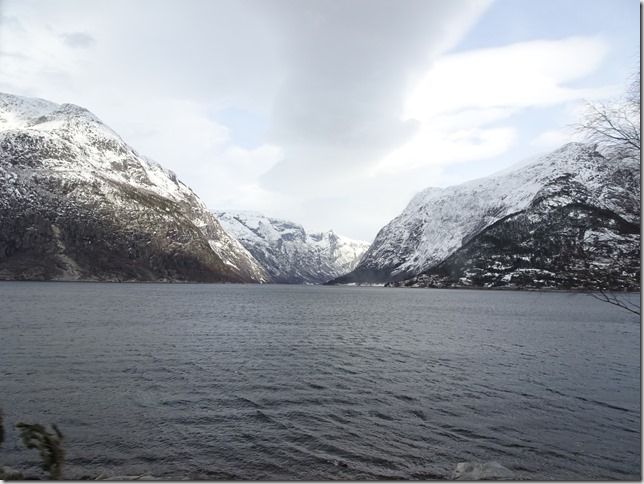 This was the fjiord we were to see from the boat. At least we go to see it, even if it was from the bus. 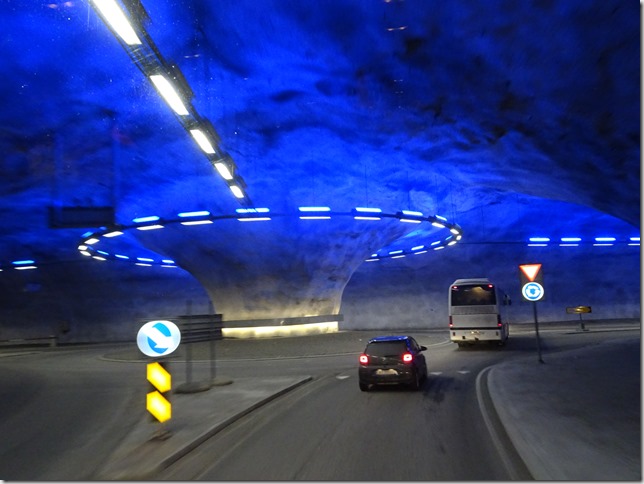 Roundabout intersection in a tunnel. 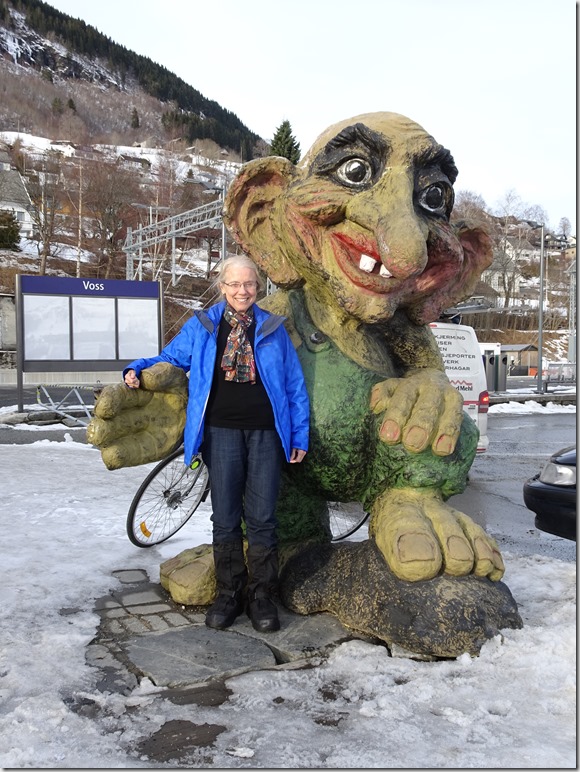 Linda found a friend when the bus stopped for a potty break. (Notice the boots, Dianne!) 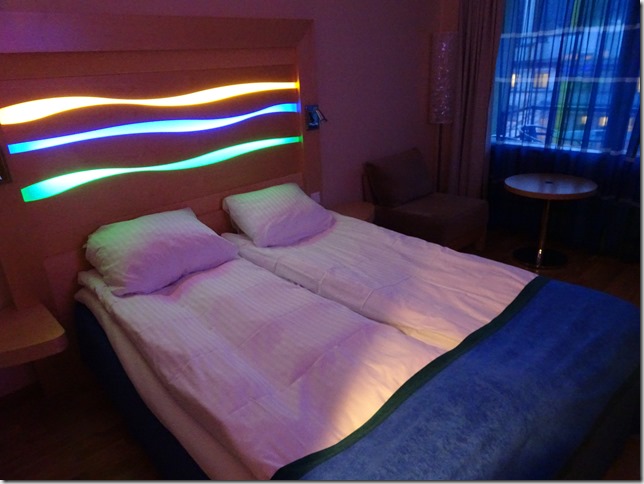 Our hotel room in Bergen for the night. Small room, but a most interesting bed. 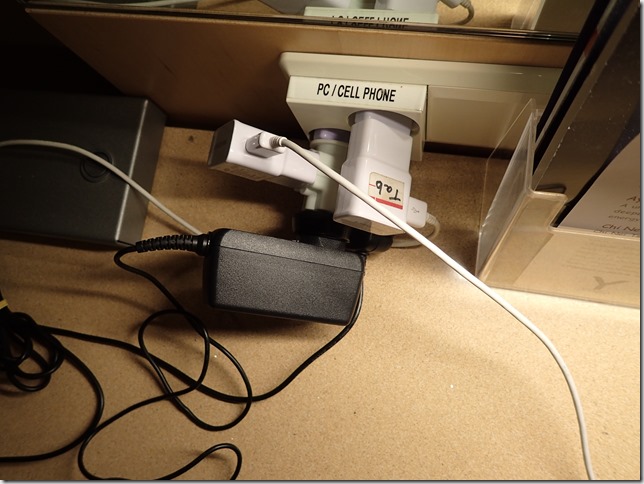 Where there is a will, there is a way. we use a cube to give us more outlets and it works great.

Today may not have gone as planned, but we still had a great time. This is the third time we have had a train breakdown in the middle of its journey during our different trips and each time we end up with a good story. Life is meant to lived.