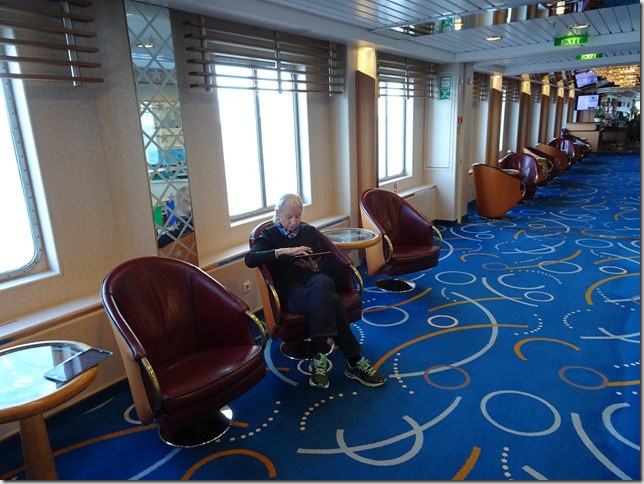 Usually these chairs are filled with people, but not so this morning. I’d like to think that only the very best people were sitting in them. Nice Bob. 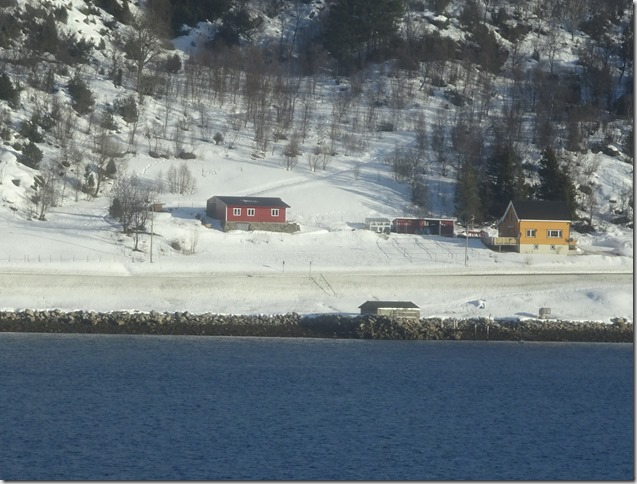 It doesn’t matter if she has her back to the windows, if a red building comes into view, her sixth sense kicks in. 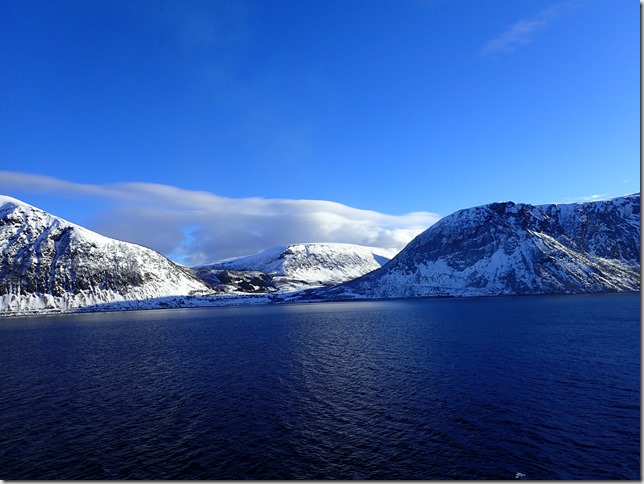 It’s called the most beautiful voyage in the world for a reason. 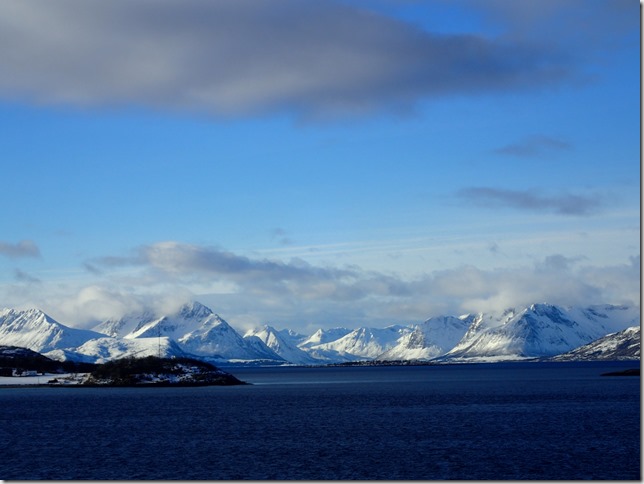 Yes, it can be cold and windy at times out on the deck, but with views like this, who cares. 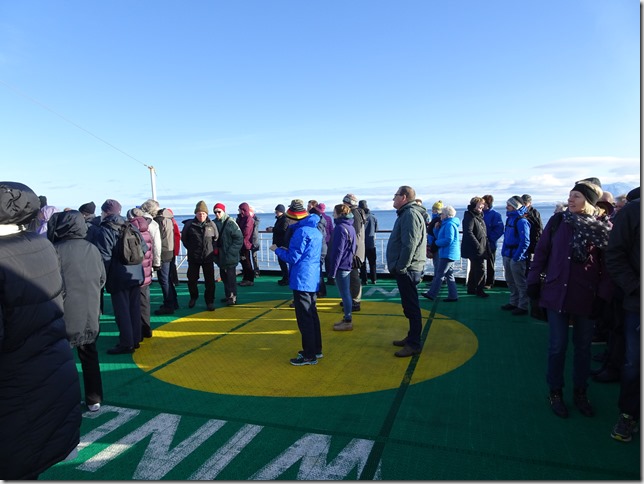 Oftentimes when the ship is passing a point of interest there is a gathering on the deck and an Expedition Team member gives a talk. We try to get to as many of these as we can, because we seem to always find them worthwhile. 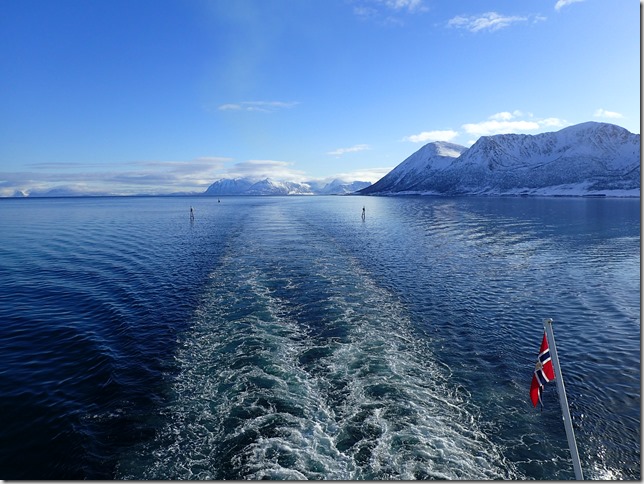 View from the stern. 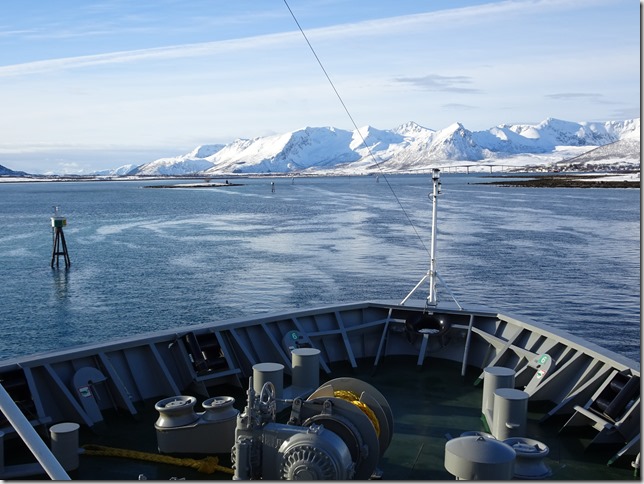 View from the bow. 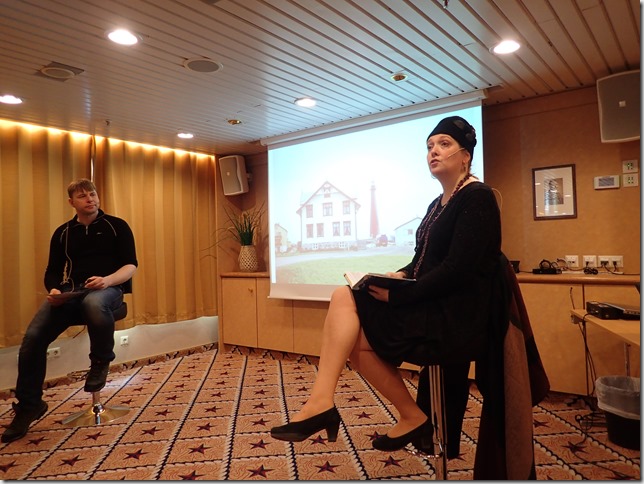 An Expedition Team presentation called the Nordlys Talk Show. It was an interview with the daughter of the founder of Hurtigruten. They both did a great job, and even broke character several times as the audience got to laughing. 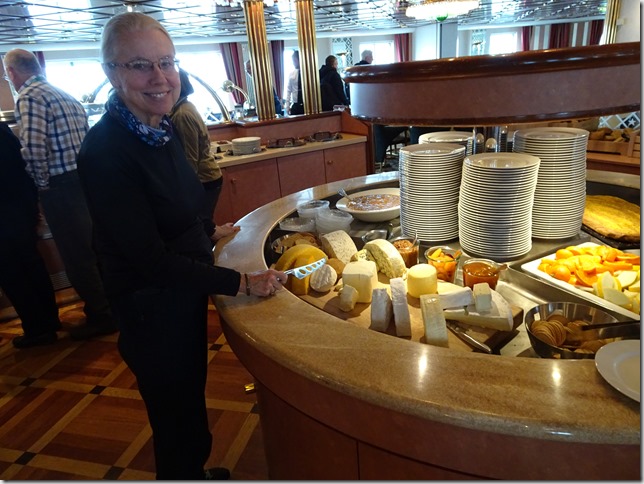 Linda the cheese lover in Hurtigruten heaven. It was a tough job eating a slice of each one, but I had faith in her and she lived up to it. Of course I was with her slice for slice. Most of the cheeses are ones we don’t have in the US, so it is real treat to experience these new tastes. Happy Linda. 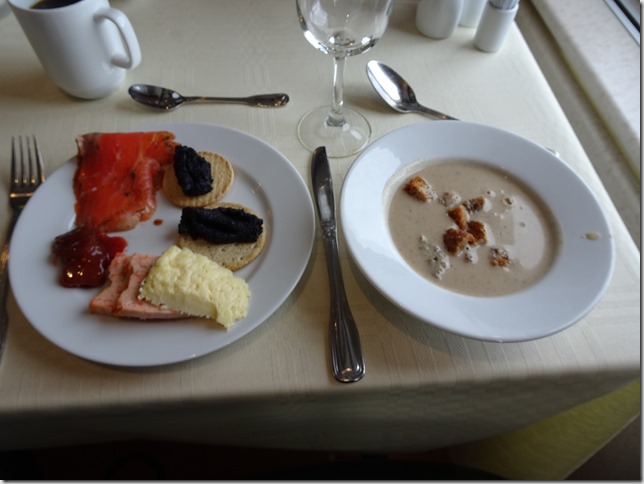 Man can not live by cheese alone, or at least I can’t. Mushroom soup to die for, caviar on crackers, marinated salmon, herring in tomato sauce, salmon loaf and a slice of cheese. That makes for a great lunch time appetizer course before my fish plate. As a note to the non fish eaters, they have plenty of other foods, both hot and cold for the non-fishaterians on board. 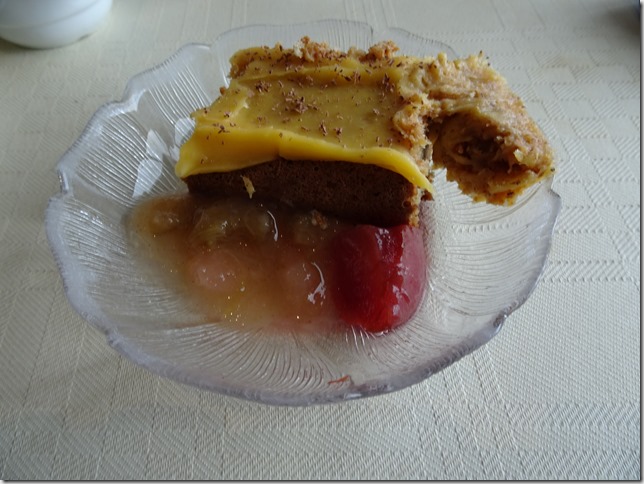 I must comment on the dessert, which was cake, baked plum and rhubarb sauce, talk about good! You might notice there is a large pile of frosting beside the piece of cake. The cake server had a coating of frosting on both sides of it when I picked it up. Being a really nice person, I bit the bullet so to speak, and scraped it off on my plate so the person in line after me would have an easier time getting their piece of cake. Considerate Bob. 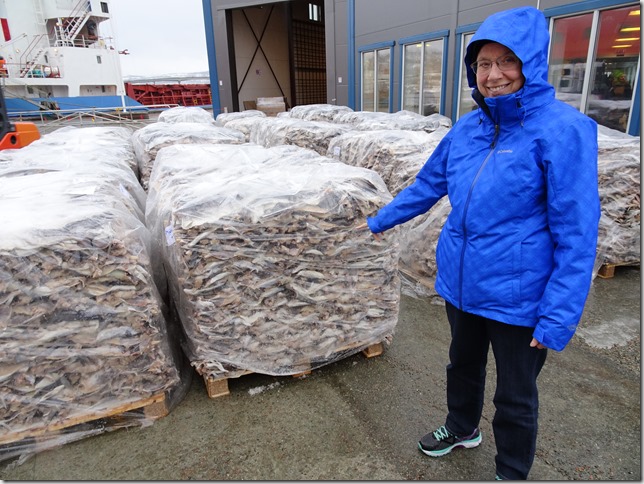 Pallets of salted cod waiting to be loaded aboard the ship during our stop in Stokmarknes. By now the weather had completely changed, with rain the order of the day. 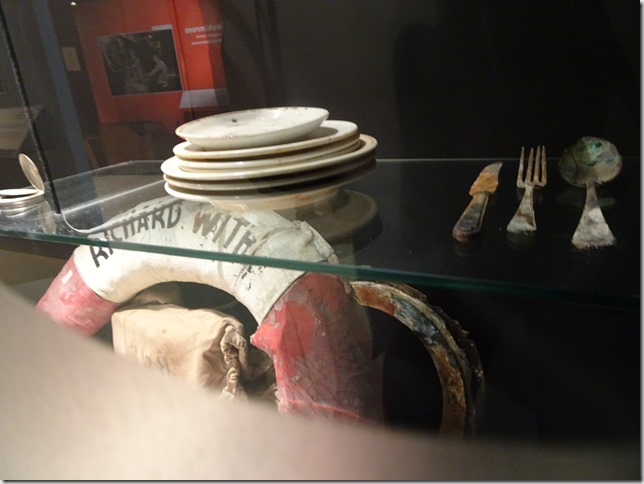 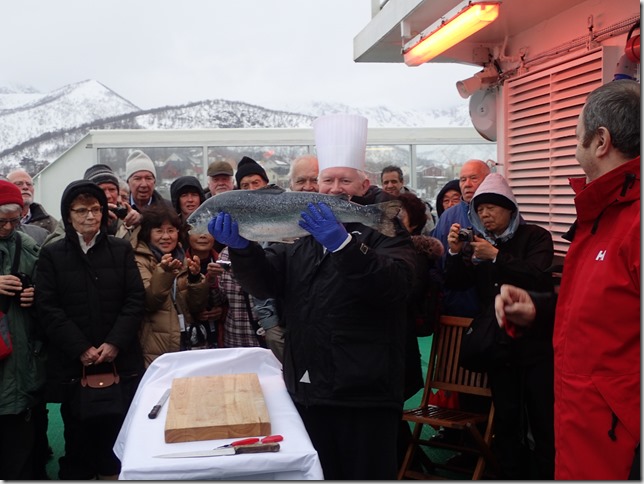 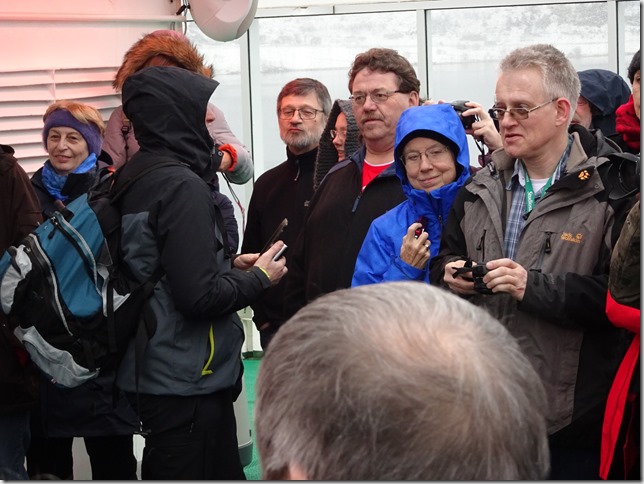 Linda always seems to get a front row view. I think she just smiles at the men around her and they make a place for her. Lucky Bob. 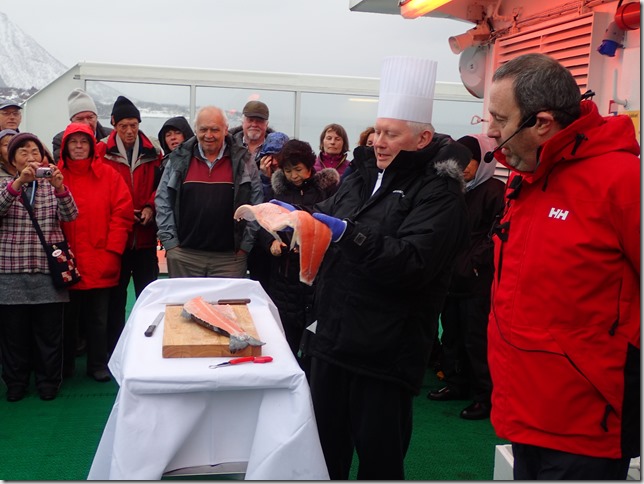 The chef made it look so easy. 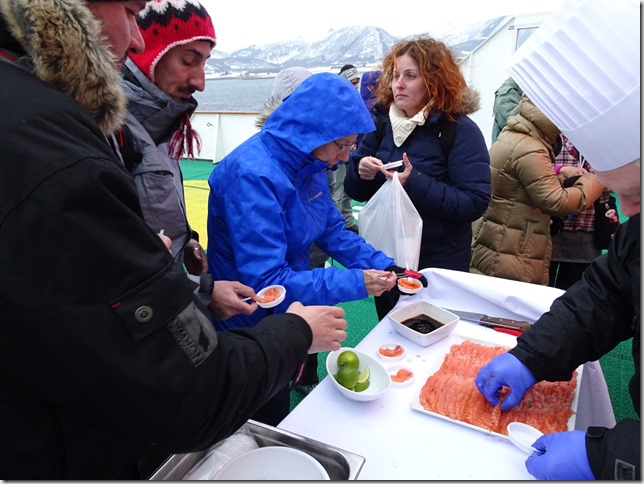 Will wonders never cease! Is Linda really going to eat some raw salmon? 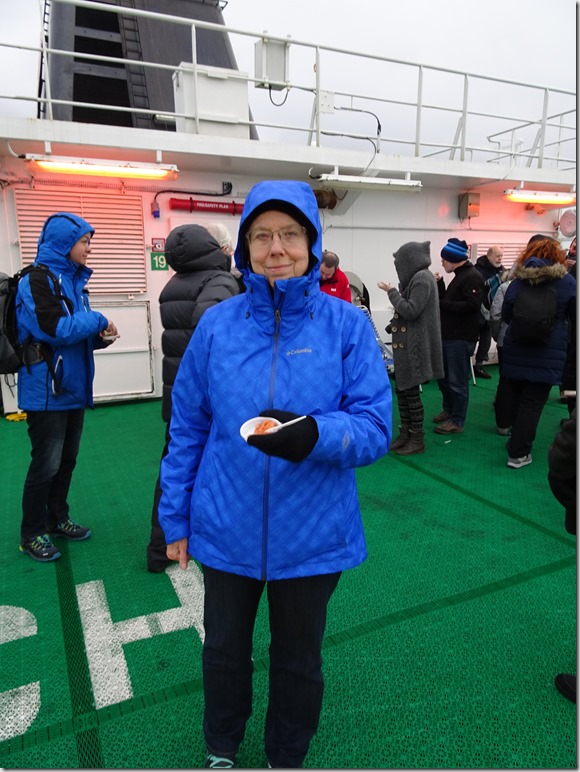 Linda rocks! She may have only had a very small bite, but that is way beyond what she has ever done before. I’d like to think my raw salmon gluttony at every meal had something to do with it. Her take was that if she tried it once, she’d never have to try it again, and this was likely as fresh as she would ever get. Tough Linda. 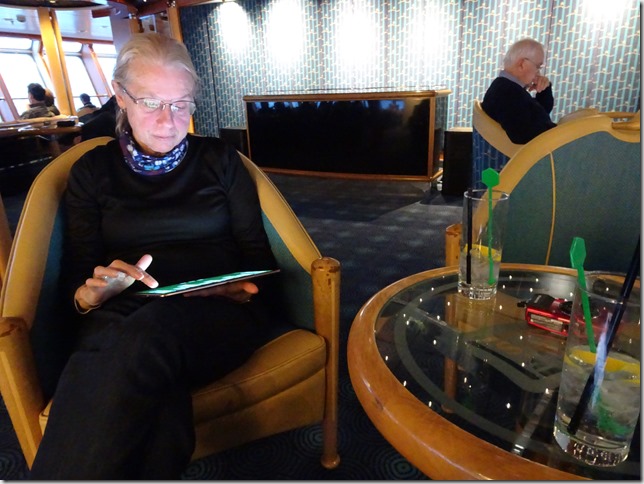 By late afternoon the weather was still deteriorating. We both had enjoyed a gin and tonic up in the Panorama lounge on deck seven when Linda decided the amount of rocking taking place with it being hard to walk without holding on to something, meant it was time for her to seek refuge in our room way down on deck 3 where there would be far less motion. Or at least that was what she hoped. 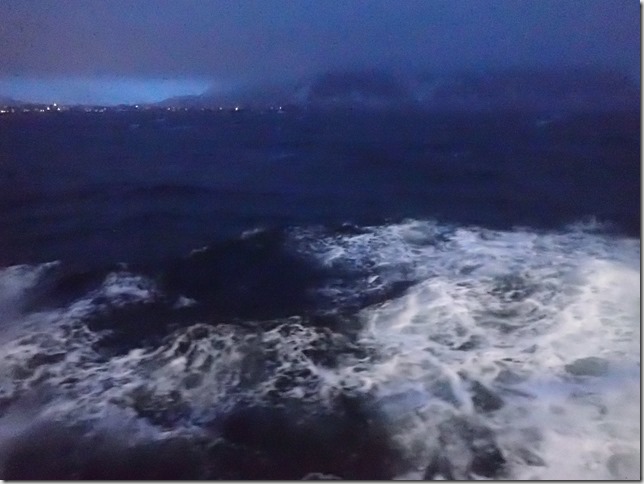 Wind, rain, fog, big waves and spray lashing the window was the order of the day in our room when she arrived. As she said, this photo doesn’t begin to show what it was really like. The awesome part is the motion sickness patch she wears, the one I have to change out and put behind the opposite ear every 72 hours almost to the minute. They work wonders and she was totally unaffected by the constant motion of the ship. 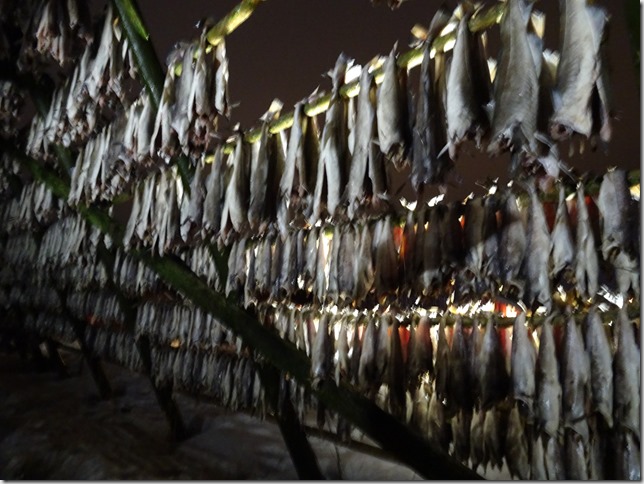 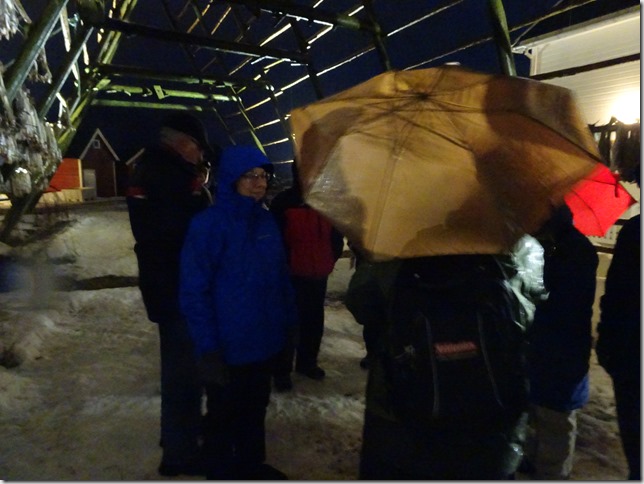 it was cold and rainy, but we have discovered that with the  right clothing, we don’t notice it. We both wore our boots and rain pants, and it was an excellent decision as at times we waded through water standing in the streets to get from one location to another. 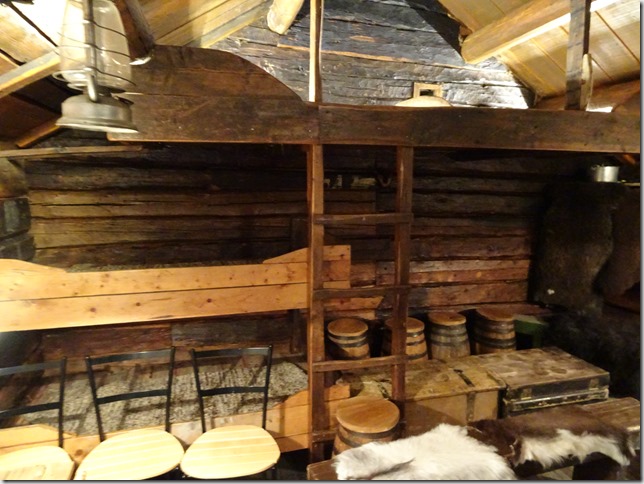 One stop was at an original cod fisherman’s cabin. Our guide was a retired school teacher and he did a fantastic job of bringing the history of the area to life. It was a bilingual group, and he talked in both German and English. As on the ship, there were far more German’s on the tour than any other nationality, though many of them also spoke English. 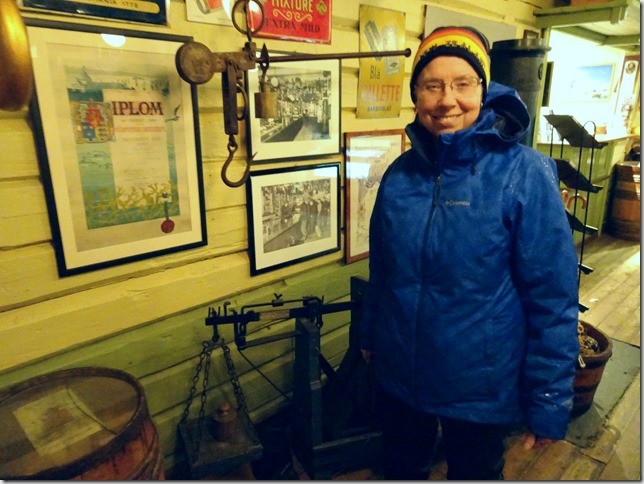 I just realized I had neglected to take a selfie of Linda and I today, but since she is the good looking one in the family, not having me in this photo is no loss. 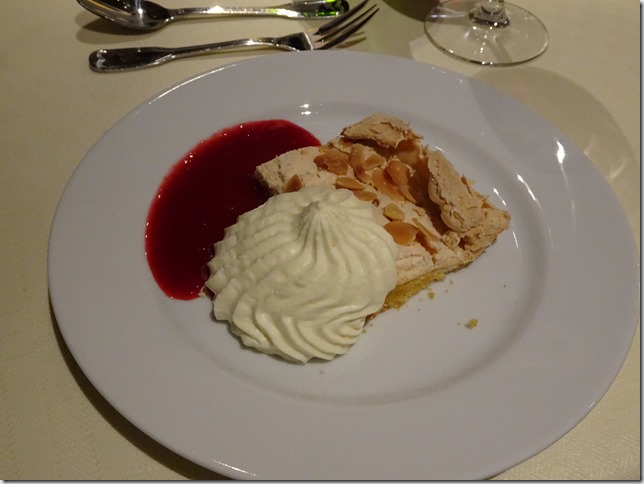 Back on board, the ship pulled away from the dock immediately after our group boarded. Then it was off with our wet outer garments and up to the dining room. Another great meal, cod with mushy peas was the perfect meal, and this dessert was an even more perfect finish. The bottle of my favorite type wine, merlot, which accompanied the meal was made even better by the fact that Linda doesn’t like merlot, so the entire bottle was mine. Happy Bob, in more ways than one. 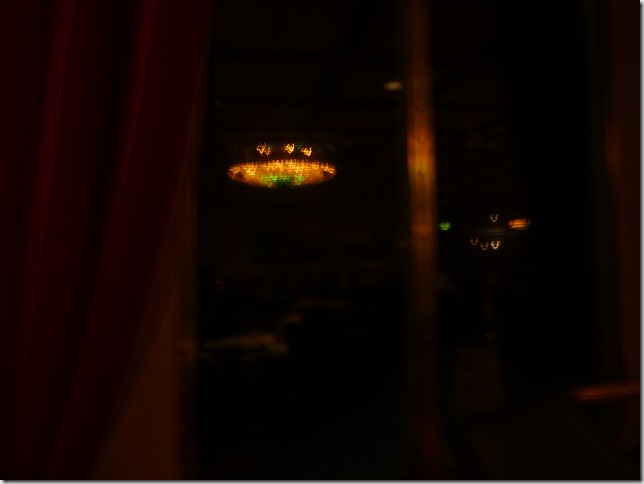 Looking out the window during dessert I even saw the green and red of the northern lights. Linda claimed the rain and fog made it so there was no way the northern lights were out. Now, I may have had a bottle wine with my meal, but I know green and red lights when I see them, so for once Ms. Always Right was usurped by Mr. Thistime Write. Delusional Bob.