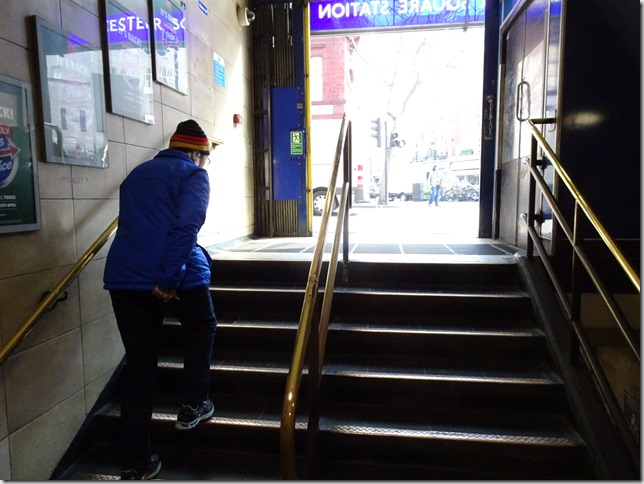 Linda has come a long way when walking in and out of tube stations. A long time ago she once said “They need to learn to walk on the right side.” To which I replied, “They do.” She didn’t see the humor in that at the time, but a short time later she looked up to see a human tsunami coming directly toward and hastily ducked under the rail, henceforth walking on the left, aka “right” side. Smart Linda. 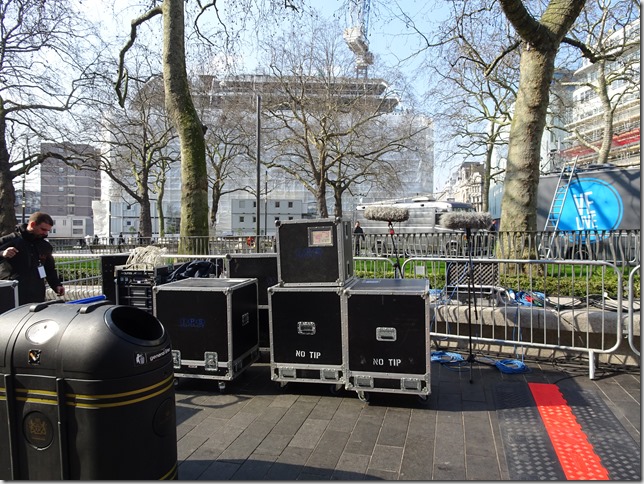 Major big doings in Leicester Square this morning as they were setting up for tonight’s world premier of the movie, Eddie the Eagle at  the Odeon Cinema. And no, we will not be among the thousands gathered at about 5 PM to see Hugh Jackman arrive, especially since we’d probably have to stand there from noon onward to have a decent view. 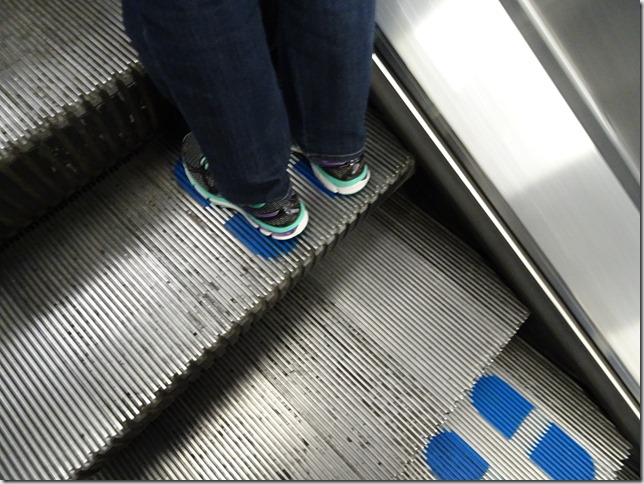 Linda knows where to stand on the tube escalators. 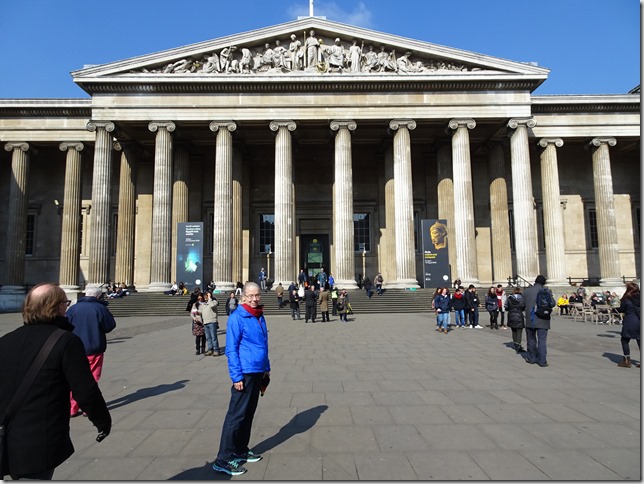 Another day, another visit to the British Museum. We do it in small bites, spending only a few hours at a time visiting since it is so handy to get to. 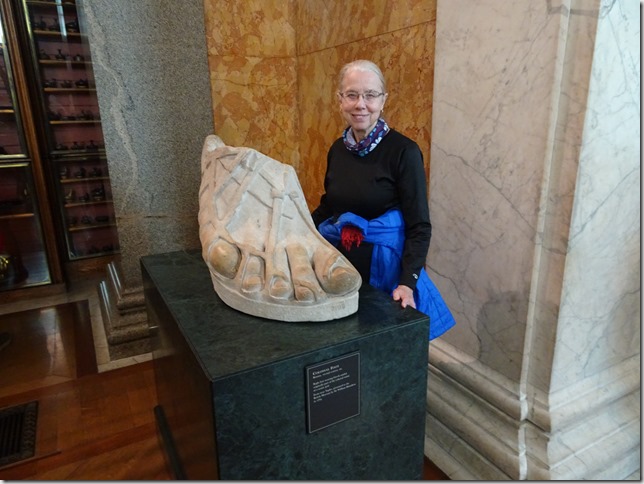 Linda’s favorite sculpture. I just know we have photos of her beside this giant foot of an unknown Greek god from prior trips. Now you understand why I sometimes call her “footie.” Her feet or other’s feet, she’s into feet big time. So why is it why I mention my feet hurting about once every five years or so, she tells me to rub them myself. Mystified Bob. 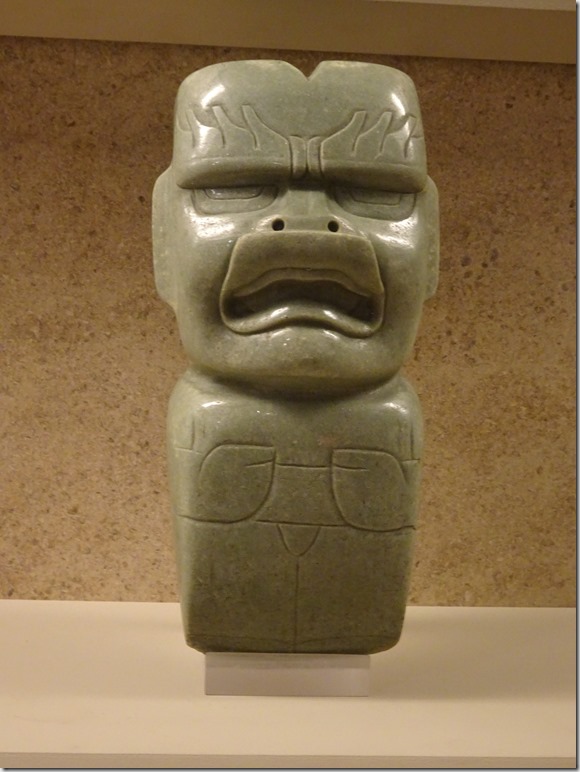 All I could think of when I saw this carving was my mom saying, “You’ll be sorry if your face freezes that way,” when as a kid,  I would make a angry face at her. 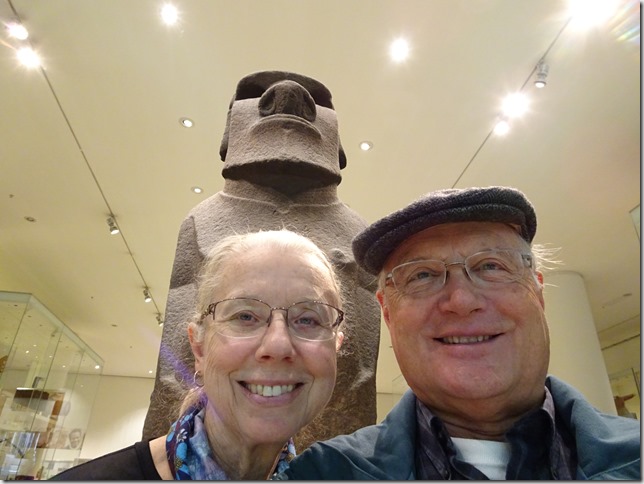 Easter Island selfie of the day. 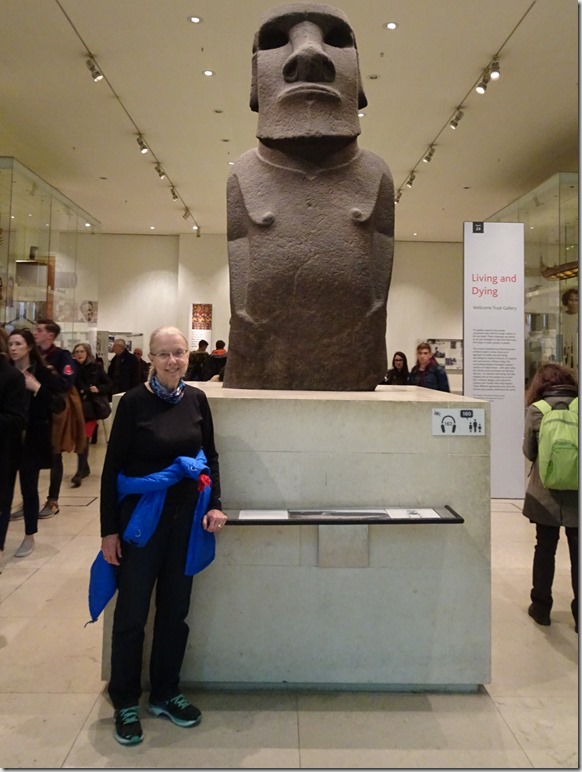 This fall it will be the same thing, but on the island. 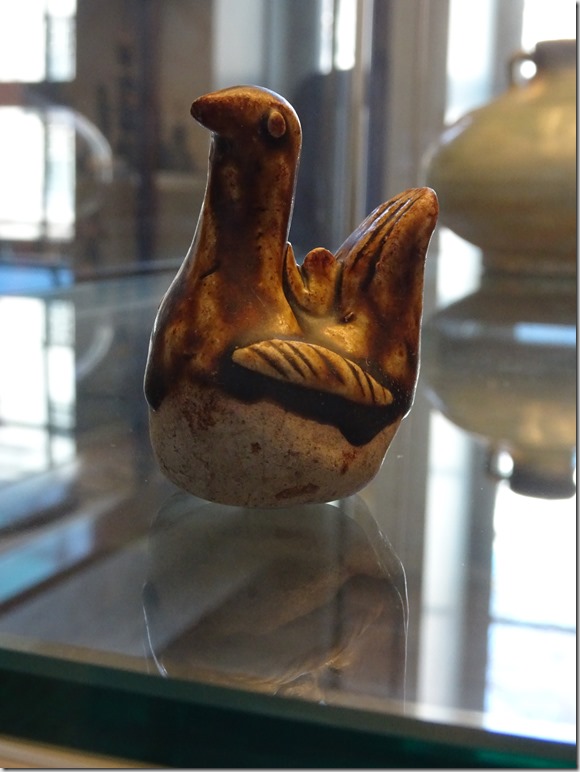 This is for Linda. She asked me if I could take a photo of this 13th century hen and chick. Behind glass, terrible background, reflections galore and poor lighting. I hope she likes it. Nice Bob. 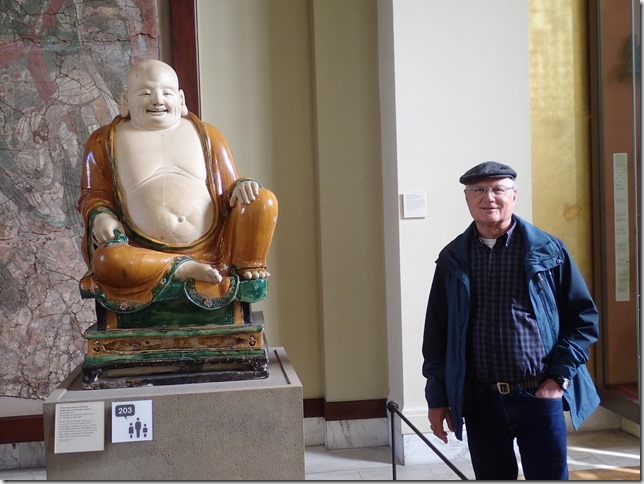 Smiling Budia, Smiling Bob. And a close contest in the abdominal area. 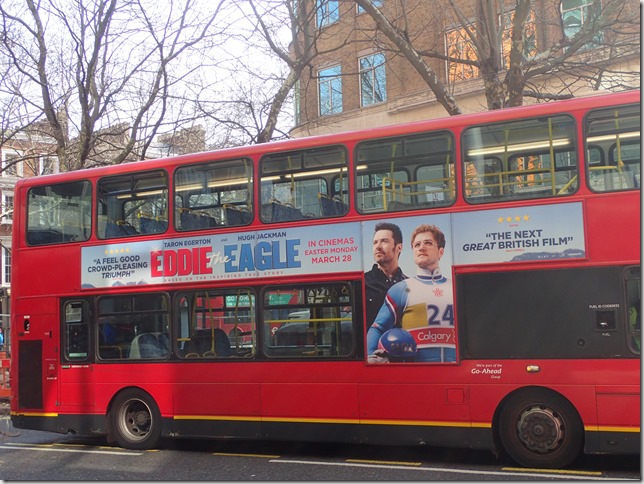 Eddie the Eagle is even of the side of the buses. The world premier is tonight, but it doesn’t open in theaters in London until the 28th. 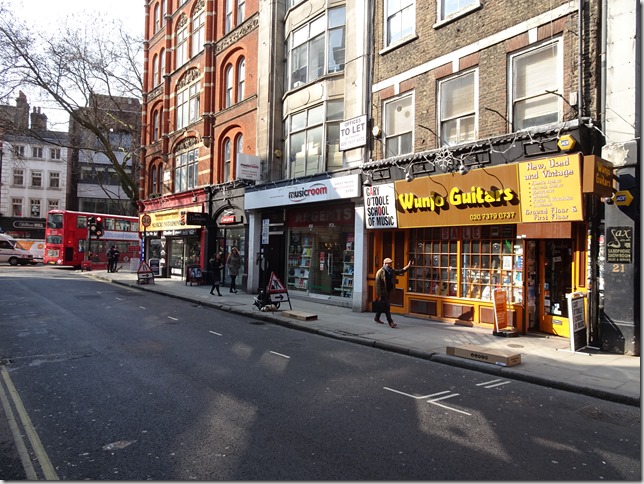 This street was lined with nothing but musical instrument shops. 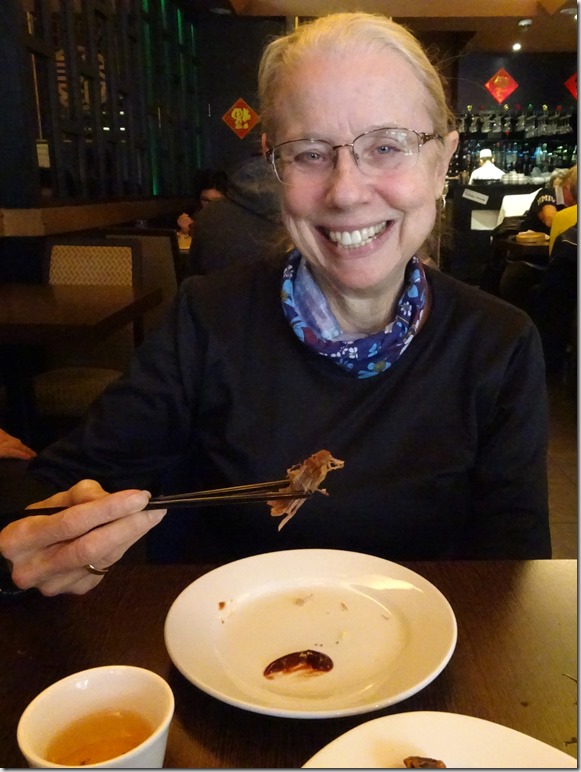 For lunch we visited Chinatown where another world’s premier event took place. Never before seen in a Chinese restaurant anywhere in the world, it’s Linda using chopsticks like never before. She had to say, ”take my picture,” twice before I realized what a momentous event I was being asked to preserve for posterity with the million watt smile attesting to the veracity of the foregoing statements. 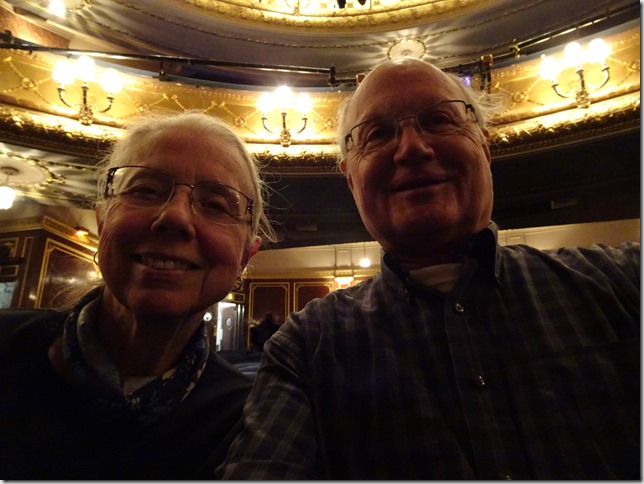 Selfie at the Haymarket Theater Royal where we watched the matinee performance of Bad Jews. This would be our entry in the culturally diversity division of the plays we will see during this trip. There were a few things that went over our heads, but all in all we really enjoyed it as the two lead characters were extremely good in their roles. 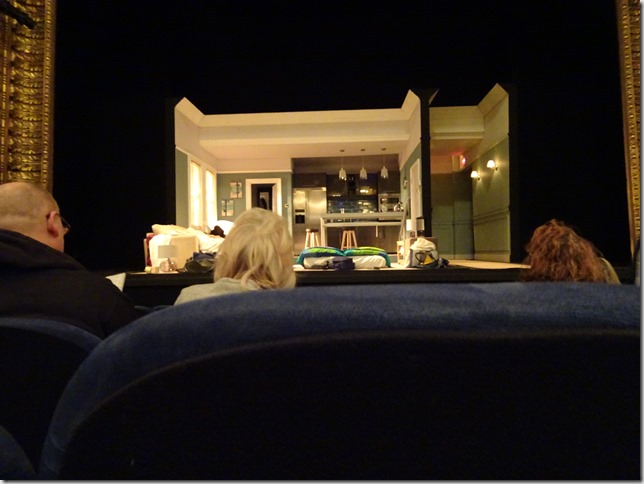 The set. A studio apartment in New York City. What you see is what there was, including no curtain. 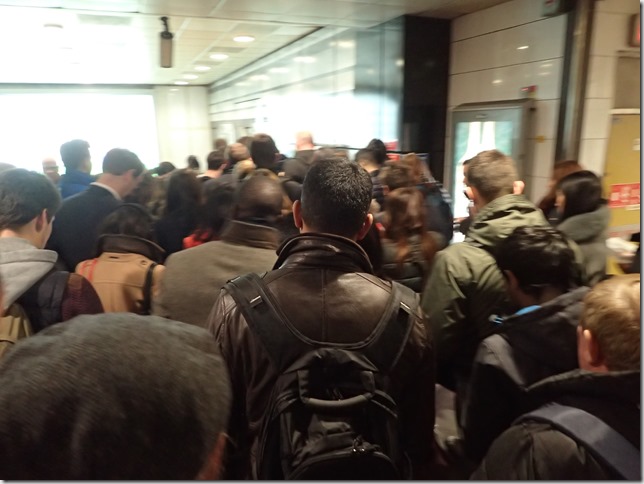 It is St. Patrick’s Day which is a gigantic party night in London. When we got to the Holborn station at 6:30 to take the tube as part of our journey to this evening play, this was the mob scene that we were part of. 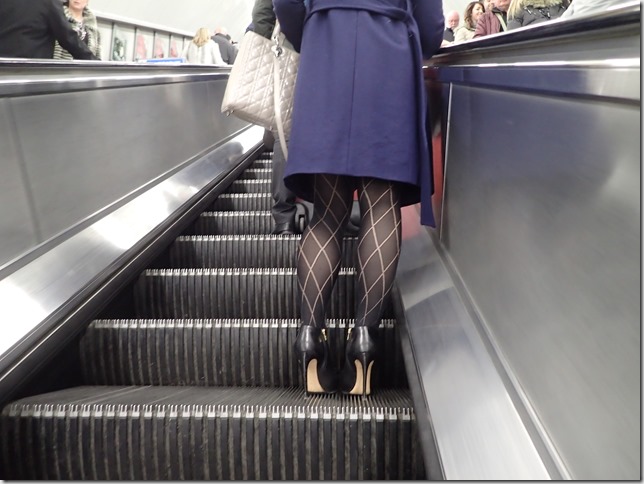 What the well dressed Londoner wears. Linda said if she ever tried to wear high heels like this she’d fall over when she took her first step. To which I added that if she wore heels that high, she’d hit her chin on the top of my head as she fell over. And believe me, Linda is a very athletic well co-ordinated lady. 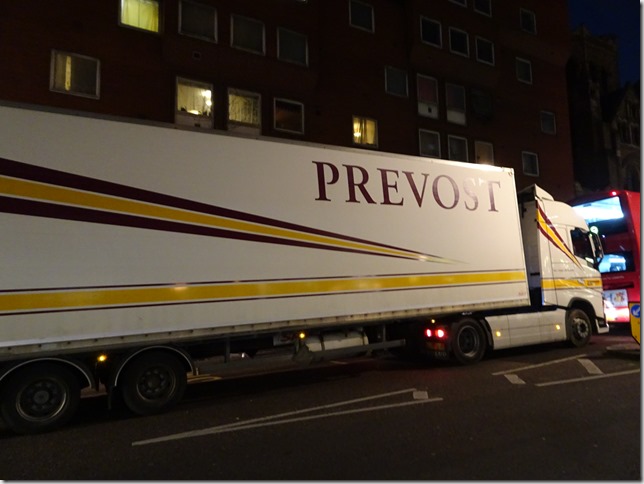 For all our RVing friends, the English version of a Prevost. 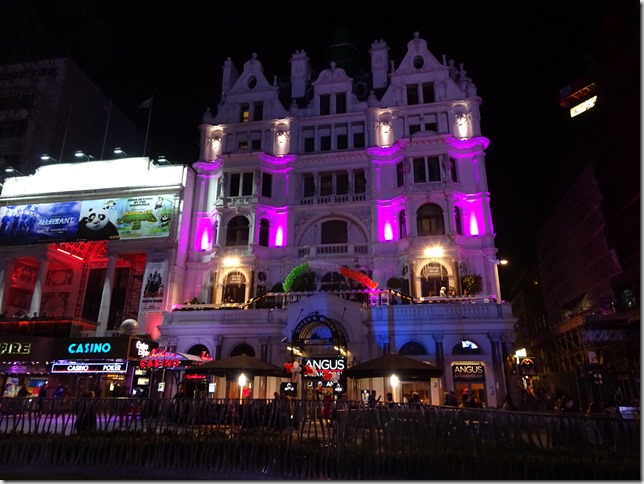 Party time. (Not for us old folks though.) 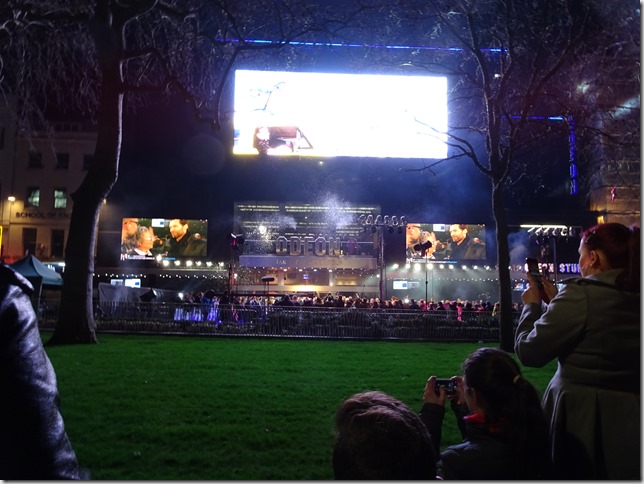 Before going to the play we stopped by Leicester Square to see what was happening at the Eddie the Eagle world premier. Needless to say, the masses were kept at a safe distance. 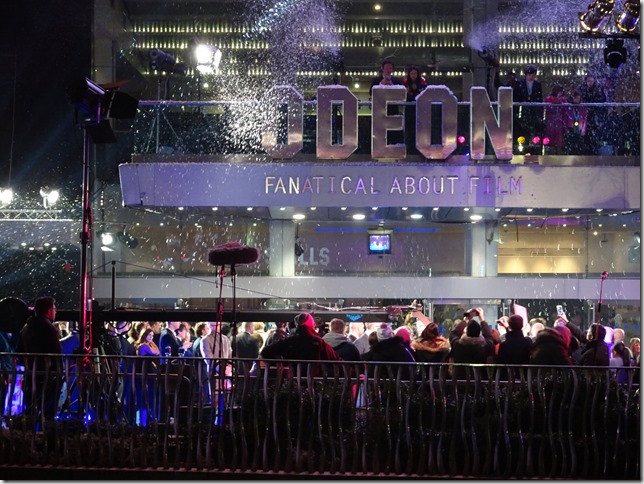 That’s movie snow falling on members of the cast who are being interviewed somewhere behind the people holding their camera’s in the air. 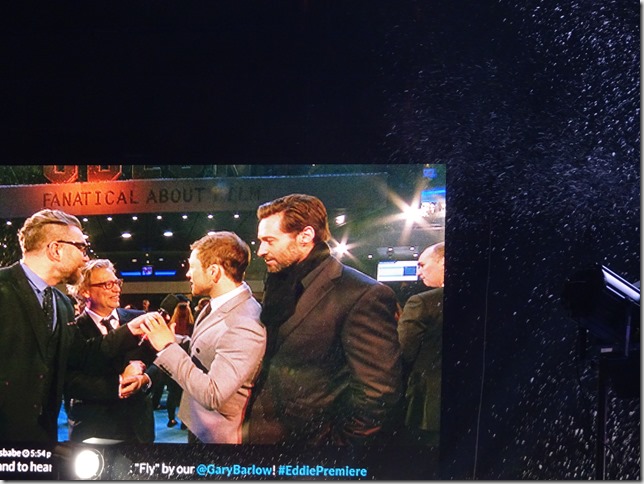 It looks like Hugh Jackman was the object of all the picture taking. 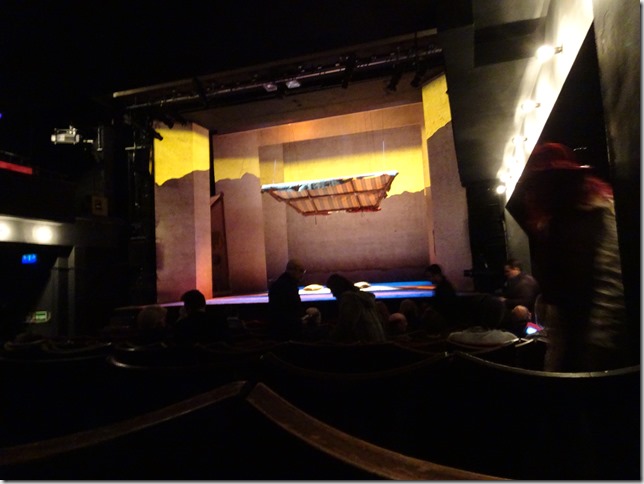 You’re looking at the set for the evening play we attended, Not Moses. I confess to being at a loss for words to describe it. Yes, it was about Moses, Pharaoh, and all that, but it was much more, mostly because of Not Moses, the baby Pharaoh's wife returned to the bulrushes because he cried while Moses just cooed. Or I could say it wasn’t bad and it wasn’t good, it just wasn’t. But I can say we both agreed a quarter of the audience of the partial filled theater left at intermission and didn’t return for the second act. We had highly discounted tickets and felt sorry for anyone who paid full price. Even so, given the chance I’d probably go see it a second time just to see if it could get any worse.