Posts may be intermittent for a while. We leave Oslo tomorrow morning, traveling by train, boat and bus to Bergen, arrive late tomorrow night. On Wednesday we board the Nordlys for our journey northward along the Norwegian coast. The internet connections aren’t the greatest onboard, so, though I will write every day, posts may show up in groups rather than every day. Be assured we will be having a great time even if you don’t know what we are doing every day. 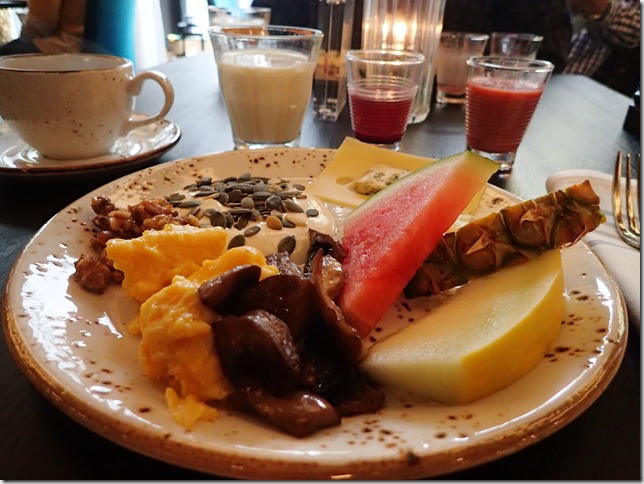 I purposefully did not take my camera to breakfast in order to spare you any more breakfast food photos.Unfortunately Ms. PEM (Photograph Every Meal)  did what she did best, and since I know what is best for me when it comes to posting her photos, you get to be treated to another so-called healthy breakfast photo. I’d like to know how any breakfast without a generous helping of fish could possibly be called healthy. Something’s Fishy Bob.

We had planned to visit the Norwegian Maritime Museum right after it opened at 10 this morning. That was not to be as it wasn’t open even though it was supposed to be. As Linda said, while standing at the door looking in, a very flustered man looked in cabinets and draws for we took to be the key, but couldn’t find it. It was very cold, windy, and snowing so we walked back to the bus station and proceeded with plan B. 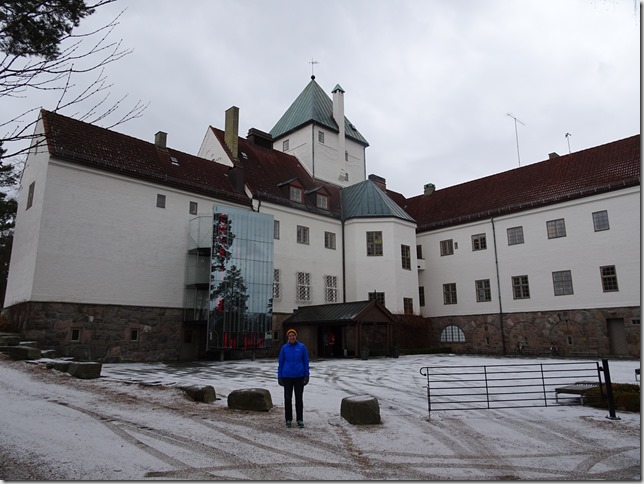 After the Germans overran Norway in  WW II, Vidkun Quisling, became head of the Norwegian administration government in Oslo. This was his home and headquarters. During the war the Jewish population, those who didn’t escape to neutral Sweden were sent to the Auschwitz extermination camp. After the war only 34 remained alive. In August 1945 Quisling was tried by the Norwegians and in October he was executed. Today, fittingly enough, the building is home to the Norwegian Holocaust Museum. 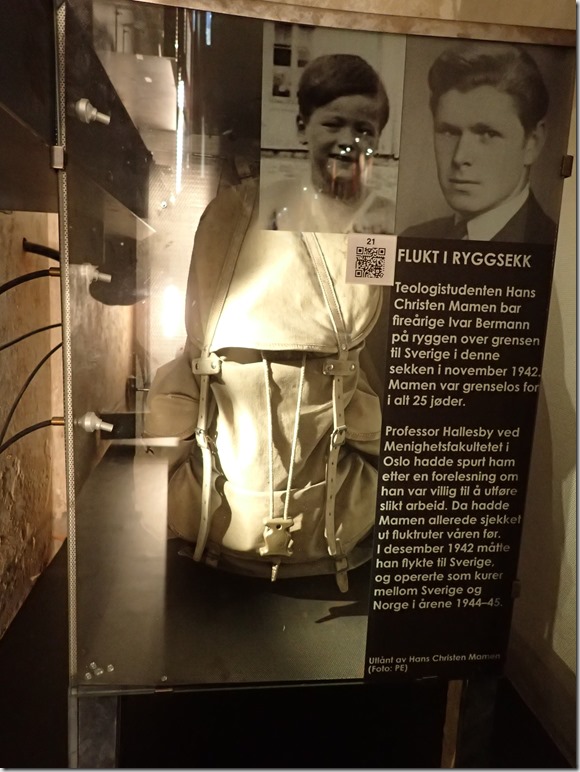 When a town we are in has a holocaust museum we always try and visit it, both to support it with our entrance fees and to remember those who were murdered for no other reason than a government wanted them exterminated. In this backpack a four year old boy was carried across the border into Sweden by a young man who helped two dozen others to safety in Sweden before escaping himself. How hard it is for those like us who are not part of a minority to understand how something like this can take place. 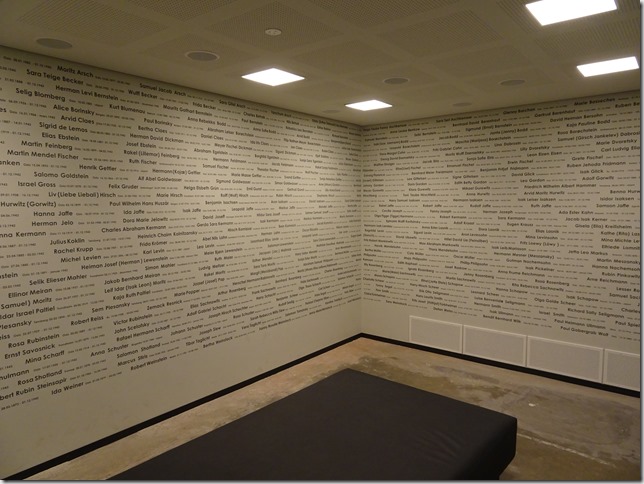 In this room the walls are lined with the names of those who were murdered. 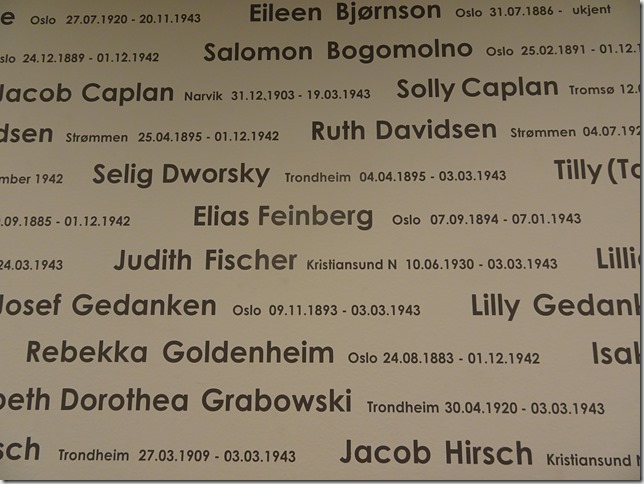 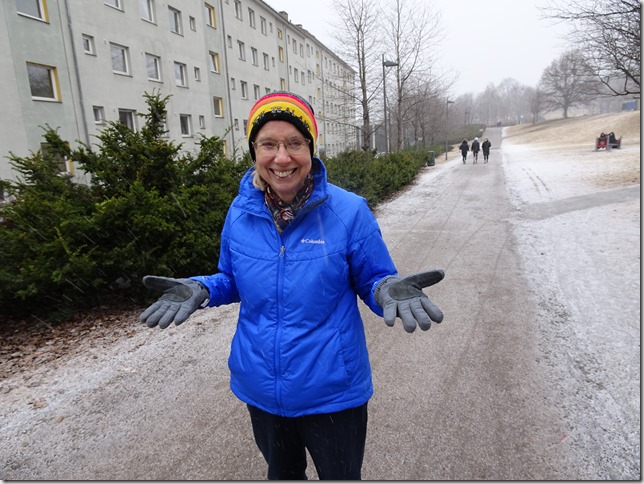 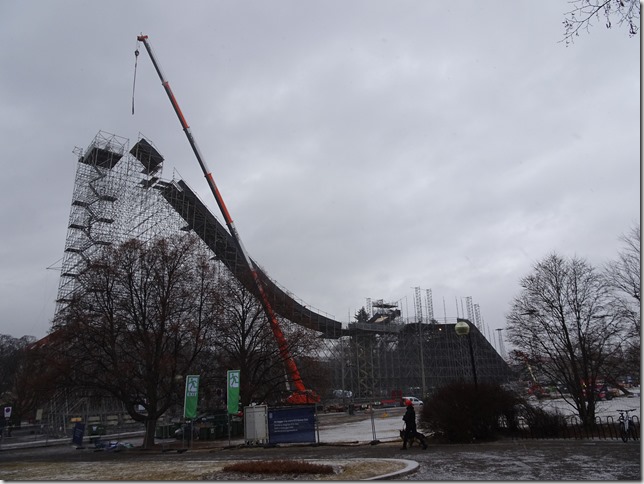 The winter X Games were held in Oslo last Thursday, Friday, Saturday and Sunday. We could have gotten tickets to see the half pipe finals on Sunday, but since I’ve never even smoked a pipe period, we passed. Okay, so I know what the half pipe is, and we are long time viewers of the summer X Games, woot, street luge, woot! Us oldsters just weren’t up to standing out in the cold watching something that neither of us care a hoot about, and paying good money for it to boot. Behind the Times Bob. 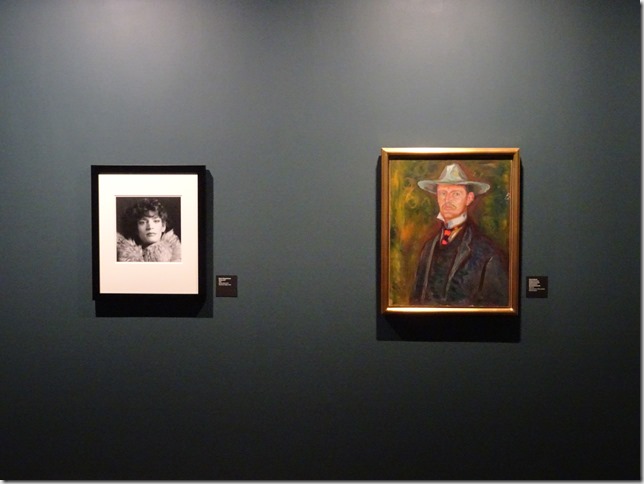 Munch Museum this afternoon. It was a special exhibition of Munch and Mapplethorpe, as in Edvard Munch the painter and Robert Mapplethorpe the controversial photographer. Suffice it to say this self portrait photo of Mapplethorpe will be all I will post. I’d say that the Mapplethorpe photographs were certainly “thought provoking” which I take it was the reaction he sought to evoke through his works. 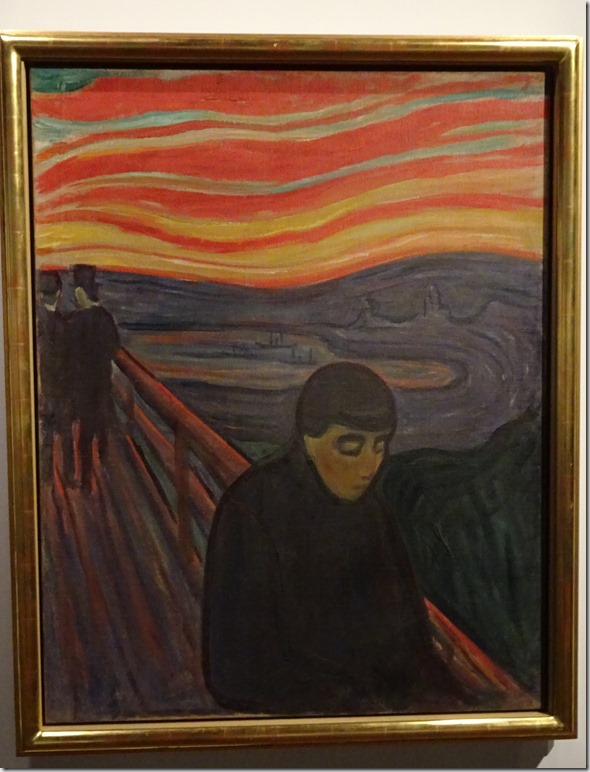 Titled “Despair”, this is the moment before Munch’s masterpiece, “The scream”. 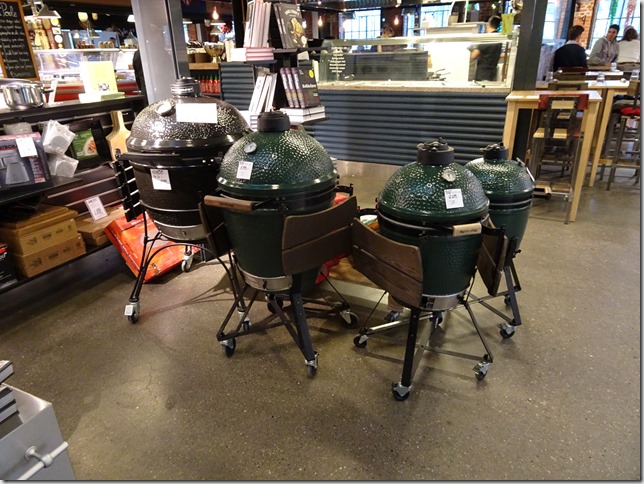 This is for our friend John who introduced us to the Green Egg via a former employee of his. It looks like the Green Egg has spread around the world, but at NOK 15,999 it is definitely a little pricey. 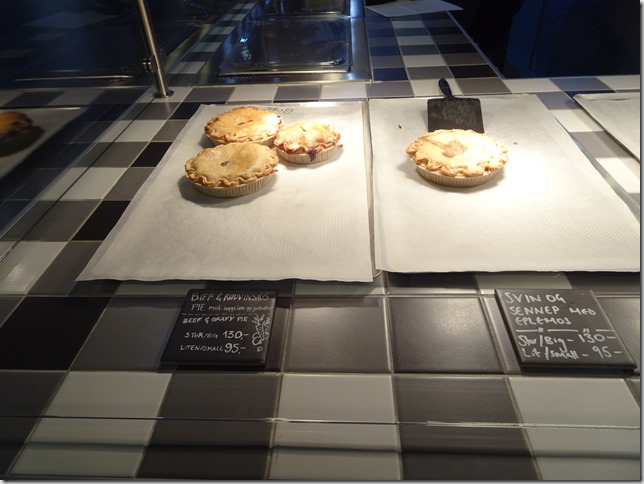 Lunch today was very special. I had read about Mathallen, and old industrial iron foundry building that had been turned into food court, and had it on the list of, if we have time lets go there, things to do while in Oslo. With the Maritime Museum disaster of this morning, we had time, and to Mathallen we went, even if we barely had an idea of where it might be. Thanks to maps.me we were soon on the right bus and after wandering lost for some lengthy minutes, don’t we always do this, we found it. 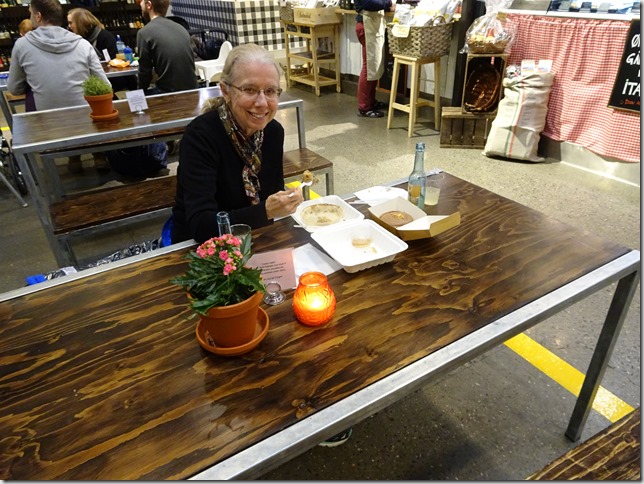 This is one very, very happy woman and in the next photo I’ll show you why. 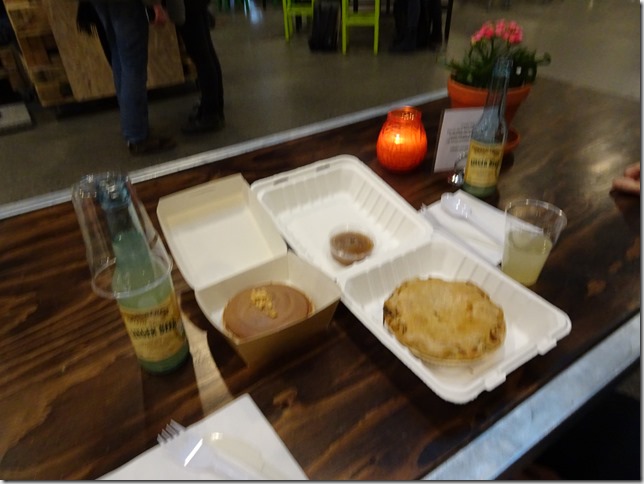 Crappy photo, but fantastic food. A pork and mustard pie with real applesauce, a chocolate peanut pie and totally awesome ginger beer. It truly doesn’t get any better than this. The only problem this was our last day in Oslo and we will likely never return. Still what a fantastic way to say good-bye to a city we have really enjoyed. 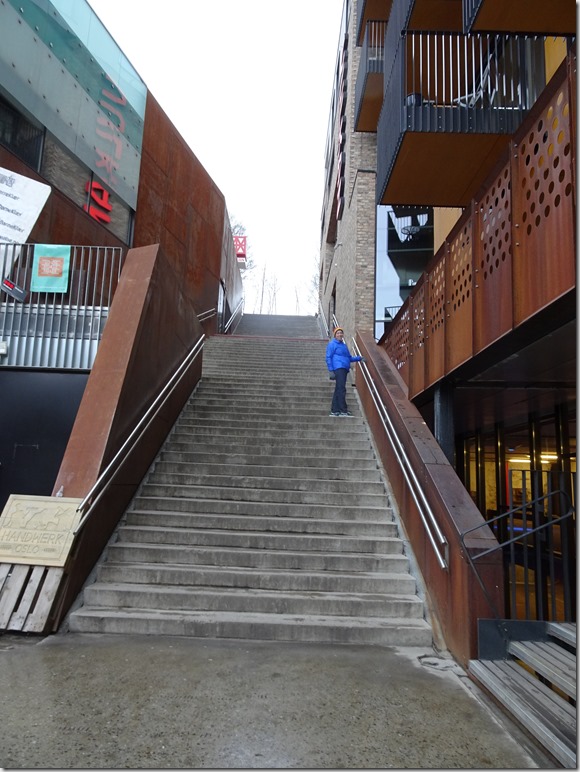 This is what we faced leaving Mathallen to get back up to the street where the bus was. We could have walked back the way we got here after getting some what lost that would have been all sloping sidewalk, but this was a major shortcut over that route. Linda laughed and said it would probably burn off all our chocolate pie walking up these stairs. I don’t know if that was right but we were both puffing a little by the time we reached the top. Eating themselves into shape Bob and Linda. 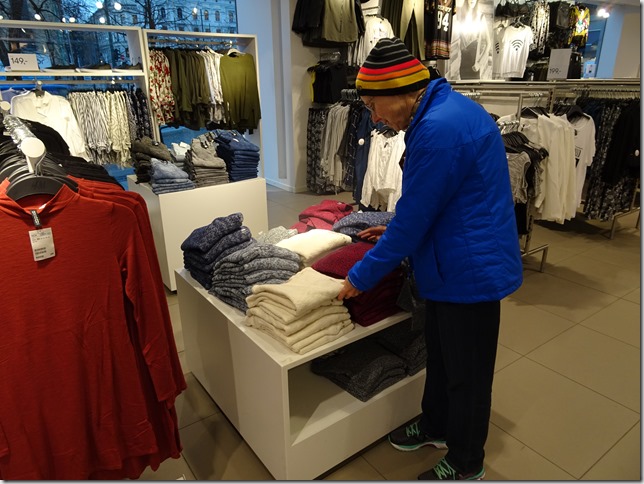 Lest you think we never shop, with some extra time after our late lunch, we walked along several shopping streets and did more than just window shop. We went inside a number of them where Linda and I both drooled over the clothes, we both like the European styles far more than the styles common in the US. More than once there were purchases in hand, but in the end we left empty handed. My problem is I absolutely know that if I ever buy a pair of European jeans I will never buy another American pair again. The European jeans just look right on men is all I can say. And with that it’s time to say so long and hopefully it won’t be too long until I get the next post up. Tired but happy Bob and Linda.