A weird title for today’s post, but it fits as you will see. 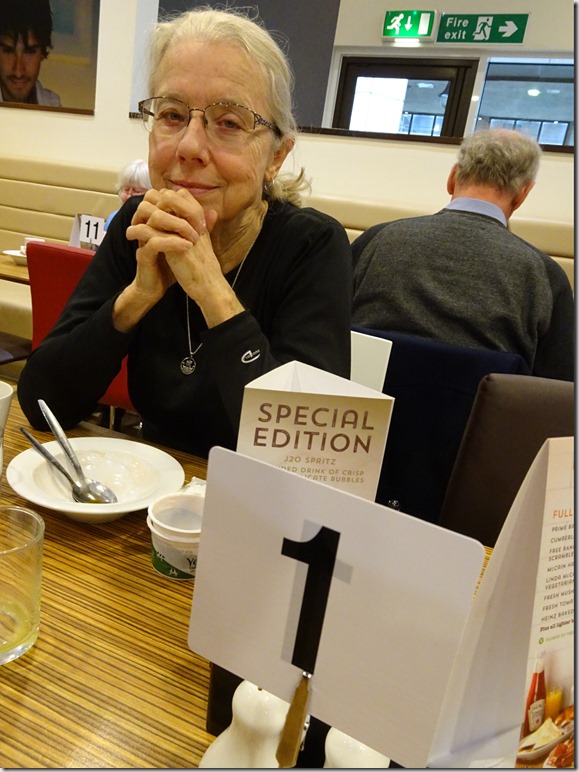 When I said to Linda, “Let me take your picture,” this morning at the breakfast table, from the expression on her face I don’t think she didn’t understand why. And here I thought it made for a perfect picture. It describes her perfectly. She’s definitely No. 1 in my book, and she isn’t just anybody, she’s a Special Edition. Lucky Bob. 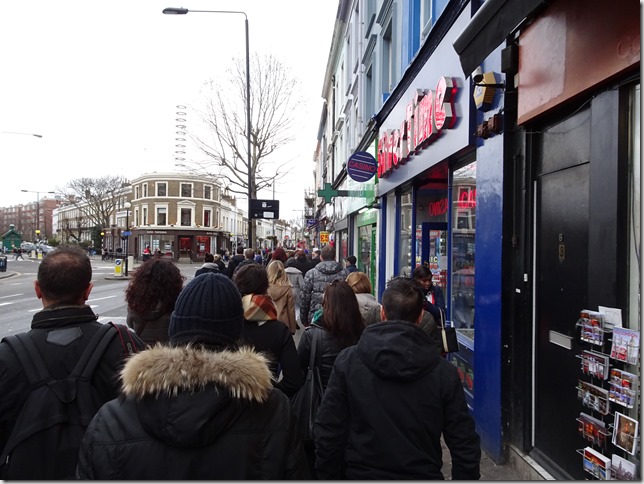 It was Saturday morning an London and we did what we always do on Saturday morning in London, we took went to the Portabella Market. It happens every time we go. We exit the Notting Hill gate station (we like to start at the top of the hill on Portabella Road to literally as well as figuratively walk down the street) and Linda asks, “Which way do we go?” My answer is always the same, “Just follow the crowd.” Backing up to last night when we were discussing whether to go to the market or not, Linda said it perfectly, “It’s a happening, how can we not go.” 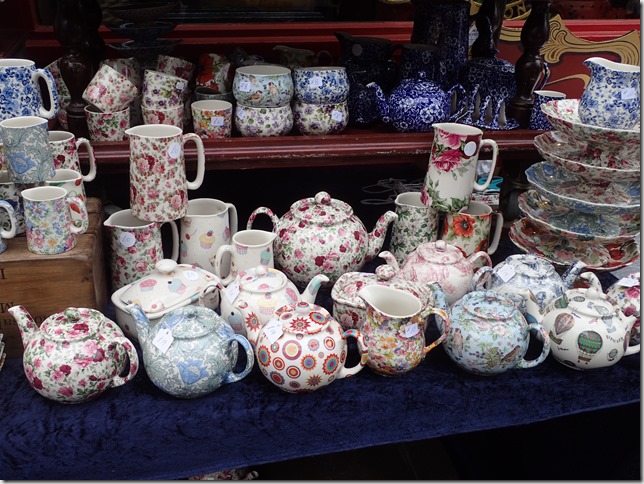 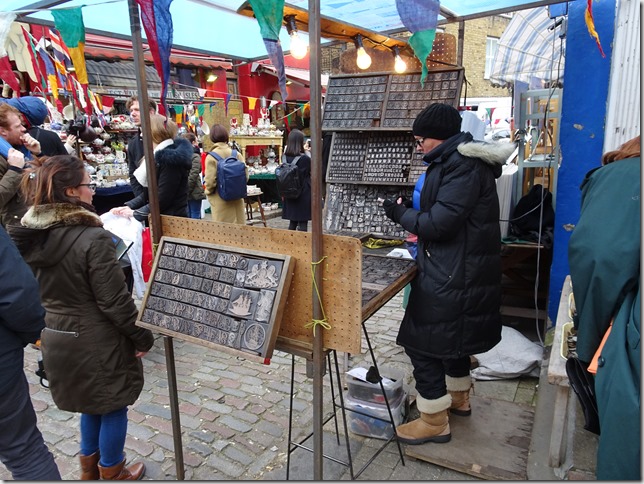 We can never look at printer’s type and blocks without thing of my Dad. He was majorly into these types of things. Pun intentional. 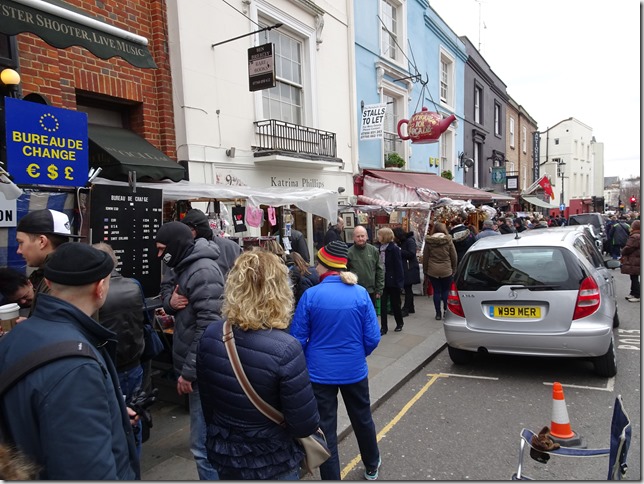 Not too crowded at the upper end of the street making us think the cold weather had kept people away. 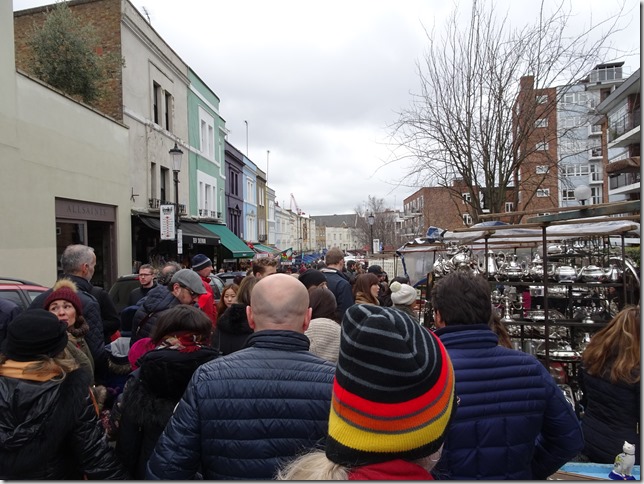 Wrong, the hordes were there, we just hadn’t gotten far enough down the street. 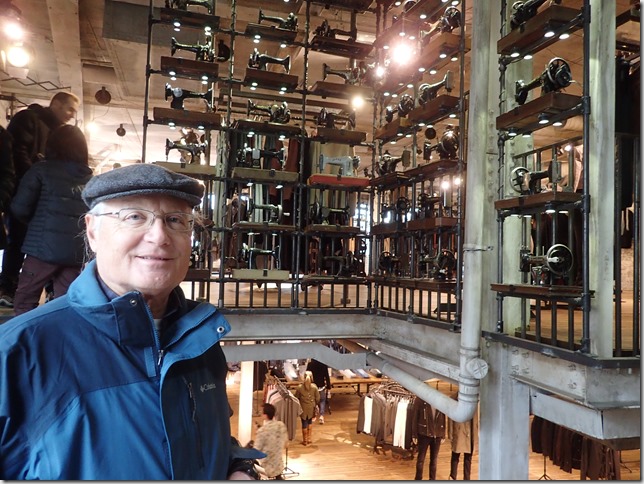 The tailor shop with the displays of old sewing machines. Linda always takes my photo here. 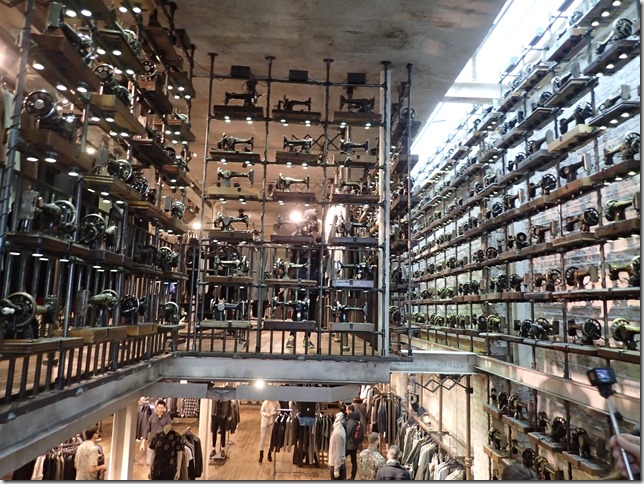 Then I always take a photo of more of the machines. Then I always post it to the days blog. What can I say, we like what we like. 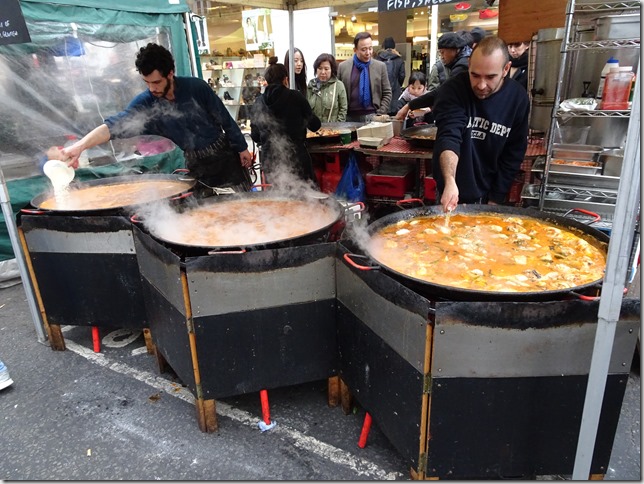 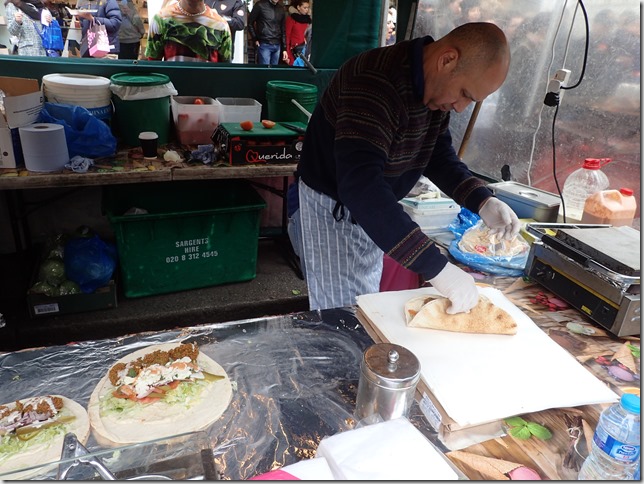 Our favorite street food is a falafel wrap, the bigger the better. 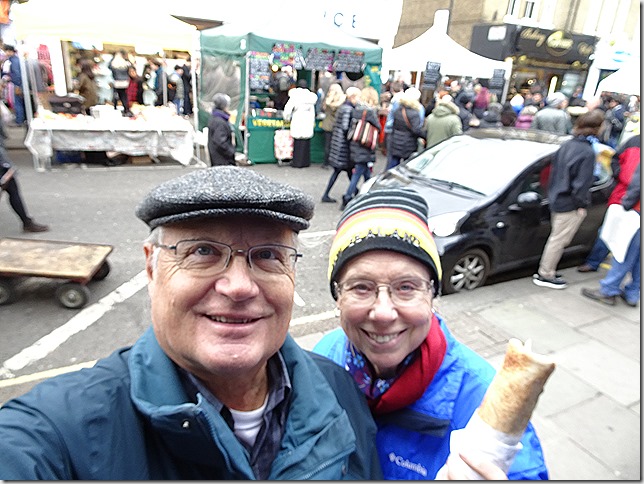 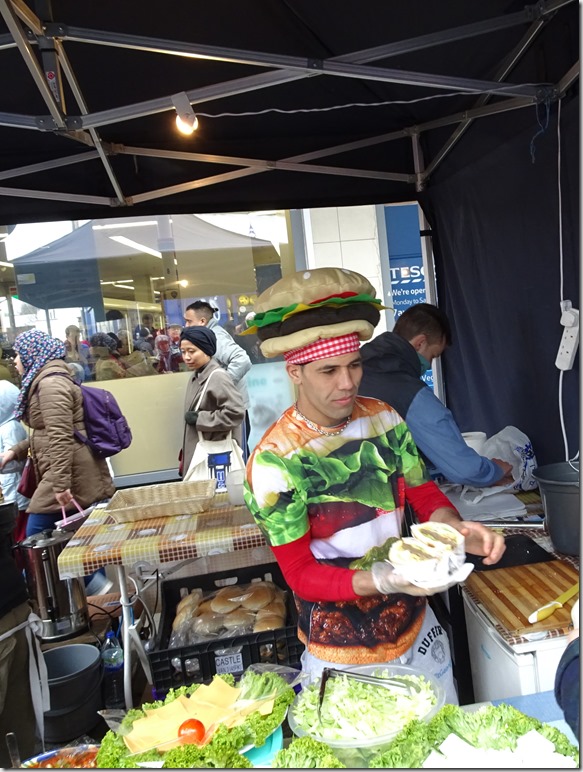 Love the hat and shirt. 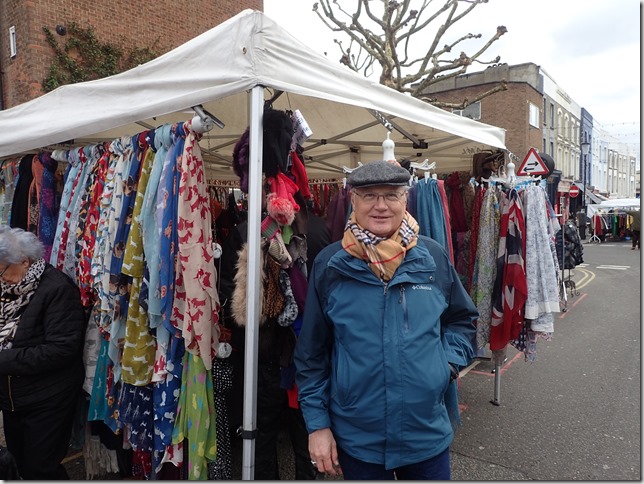 I was a man on a mission, the mission being to find the perfect scarf. I did. It was warm. I was fashionably dressed. Happy Bob. 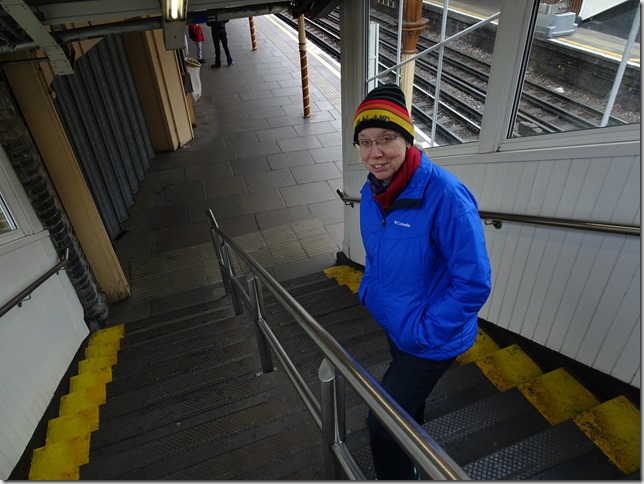 An awesome display of bravery on Linda’s part as she descends the stairs to the District line at the Hammersmith station on the wrong side. I told her she was very lucky, she said she could tell there wasn’t a train arriving at the station so, no problem. Wow! Good looking and smart to boot. Did I ever get lucky in the wife department. 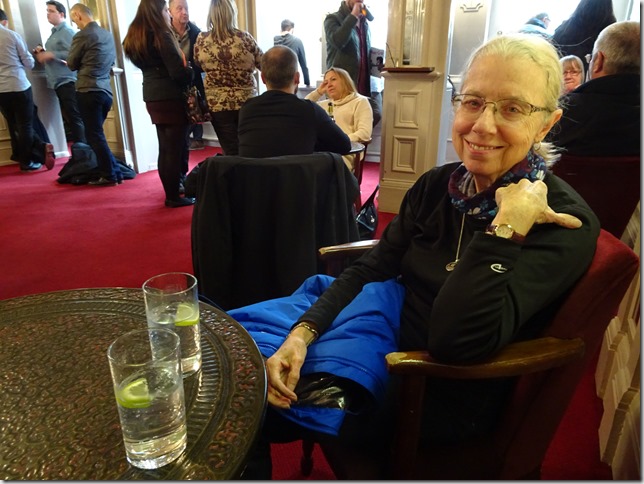 Enjoying our traditional gin and tonics in the theater bar for watching Hand to God. 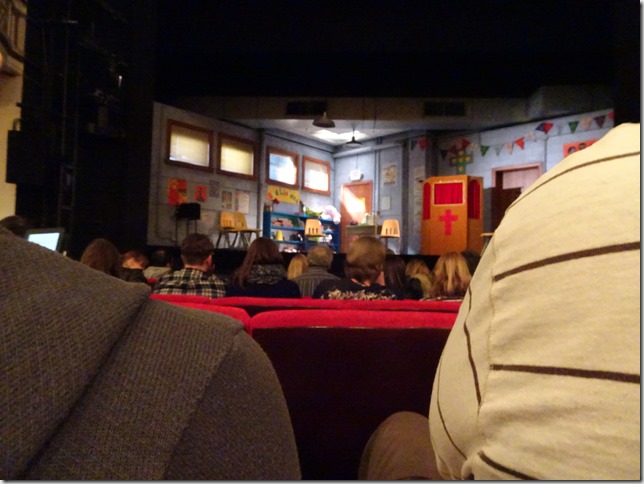 Great seats six rows back. I won’t begin to describe this play, though as the final applause faded I overheard more than one person utter the word, weird, the same thing that was in my mind. It was one of those, you wouldn’t understand if I told you, plays. Definitely another not for everyone, but we both thoroughly enjoyed it. For anyone who has seen it or knows something about it, I’ll just say that the puppets really did their thing. And for those who know nothing about it, no it’s not a puppet play. Like I said earlier, the best word describe it is “weird”. 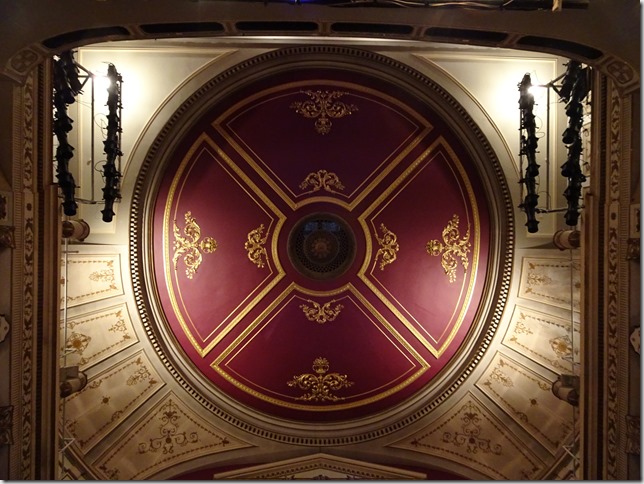 Linda said for me to take a photo of the theater ceiling directly above us. Unsaid was the command to post it, so here it is. Trained Bob. 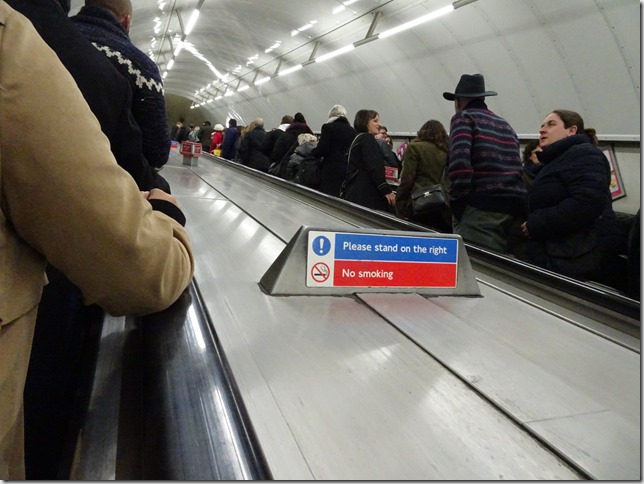 It appeared most of London was going out tonight. Later during our trip to tonight’s performance, as we were going down the escalator, it suddenly stopped. Fortunately we both had a hand on the rail when it stopped, else we would have pitched forward into the person in front of us. The person in front of Linda being me. I don’t think the unknown blond in front of me would have appreciated me thrusting into her backside. Come to think of it, Linda also wouldn’t have been happy with me either. Perhaps the previous sentence included a poor choice of words, but no harm, no foul. Relieved Bob. 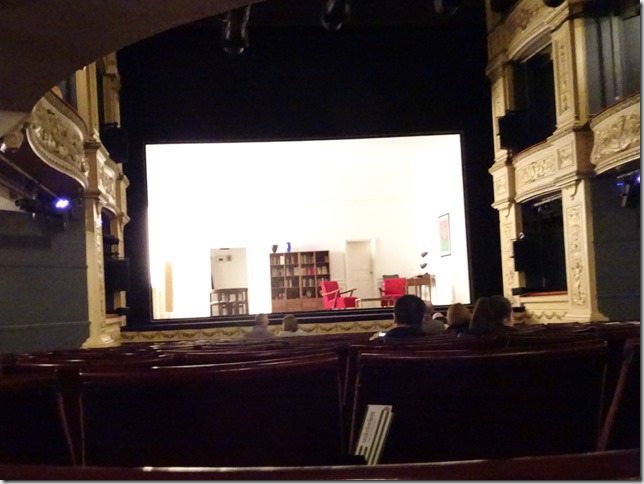 The set for the play. This theater, The Duke of York’s, was where the very first production the J. M. Barrie’s most famous play was performed. If you close your eyes you can almost see Peter Pan flying across the stage. 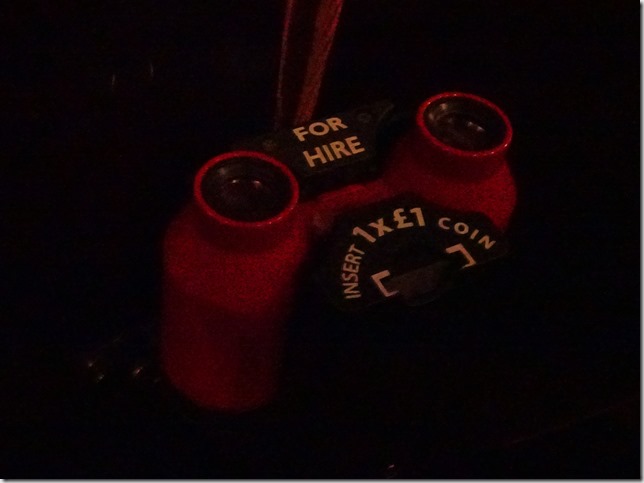 Our seats were the furthest back we have ever had in a theater. We got a good laugh out of the binoculars for rent on the seat back in front of us. We didn’t need them though, and the actors voices carried just fine. The premise of the movie concerned the ever increasing dementia of the father, something that is likely to be present in our own lives some day. Very well acted, it was another winner. We’ve now been in London for 4 1/2 days and have seen eight plays. We plan to take a break tomorrow and make Sunday the day of rest it is.