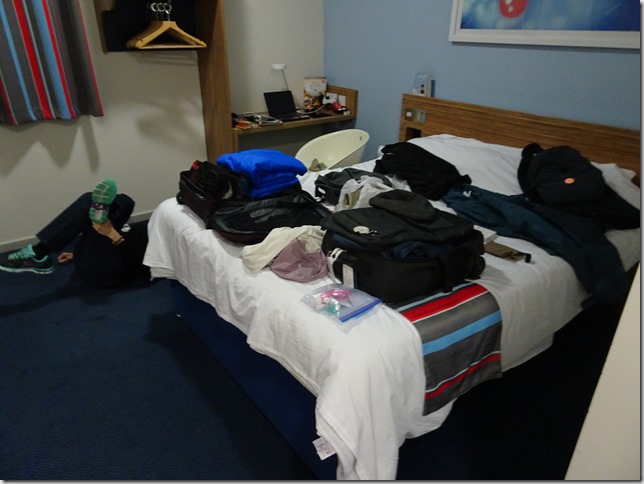 We actually managed to fit everything into our luggage with room left over. I know traveling with only carry-on bags isn’t for everyone, but it sure works well for us. 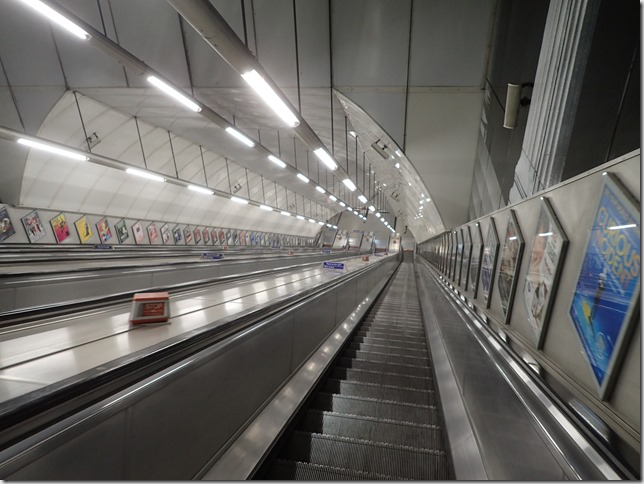 A first during our stay in London. No one else on the escalators at Holborn station. Of course the fact it was 6 AM may have had something to do with it. It’s like that old saying, “The early birds get to the airport on time.” Early Bird Bob and Linda. 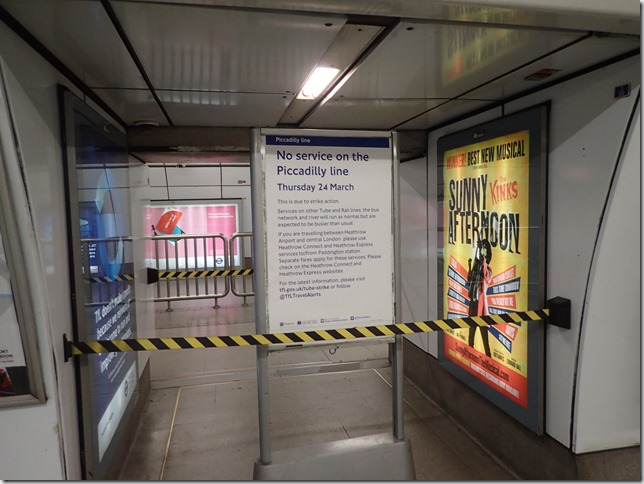 The Piccadilliy line drivers strike was actually happening. The easy and least expensive way to Heathrow is the Piccadilly line, which we always take, but not because it is the cheapest, rather because it’s the easiest as we don’t have to change trains and the Holborn station is just a few minutes from the hotel we use. Today we would take  the Central line to Oxford Circus transfering there to the Bakerloo line and then it taking to Paddington station. 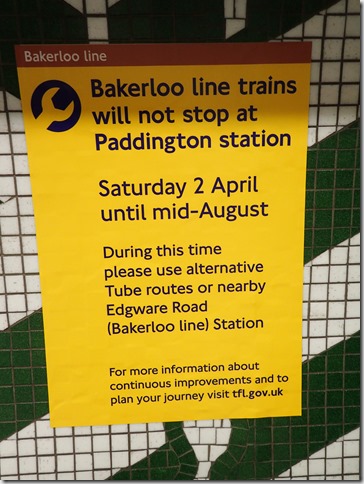 When Linda saw this sign she got a little excited, at least until I pointed out the dates to her. All that internet research was paying off for me. Prepared Bob. (It doesn’t happen very often, but I sure picked a good day to be a boy scout.) Lucky Linda for having approved me as marriage material those decades ago. 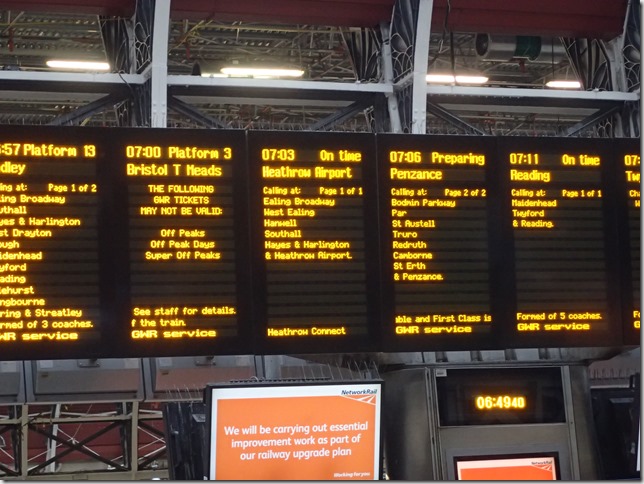 The 7:03 to Heathrow was on time. Once again my internet seaching paid off. We bought out tickets from a ticket machine, I knew the track the train was arriving on but Linda was not convinced that I knew what I was talking about. A lifetime of me going left when she said right has taken it’s toll on my credibility. Still, I spent most of my working career traveling so she should have had at least some faith in me. Hopeless Bob. 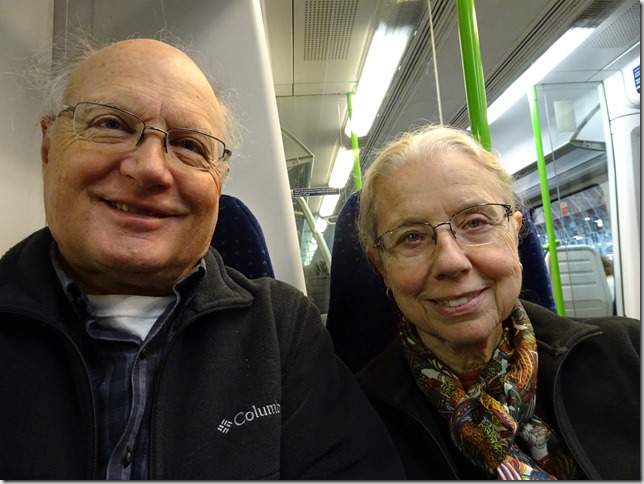 On the Heathrow connect train going to Heathrow Airport Terminal 5. My smile is because I did good. Linda has that, ‘'Thank goodness he was right for once,” sightly stunned expression. And I didn’t even gloat. Much. 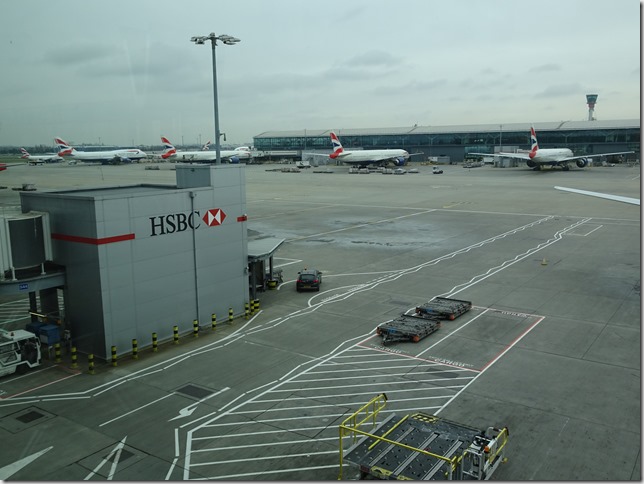 So, we get to the right terminal at Heathrow, they have five of them, check in and take the train out to somewhere near our gate, then make the long walk to it. So what do I see as we get there? We were to leave in one hour and 45 minutes on a 747. The other thing was there were no passengers at the gate. 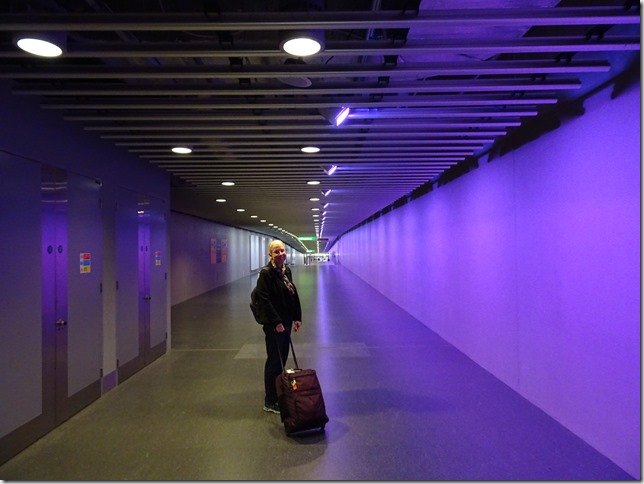 I found a customer service desk while Linda had a Starbucks coffee and gooey roll, and learned that the gate had been changed and the trains didn’t run that way, so we would have to take the tunnels and walk, like forever. this photo is of us lost somewhere in Heathrow, but at least the tunnels had a beauty of all their own. I mentioned to Linda the colors were of a calming nature. It is not in Linda’s nature to be calm at time like this, but the colors and my calm and poised demeanor gave her courage. Okay, so I wasn’t sure we were going to make it to the gate on time either, but what I wrote sure sounded good and there was no way I going to let Linda see the concern I had. Wonderful Husband Bob. 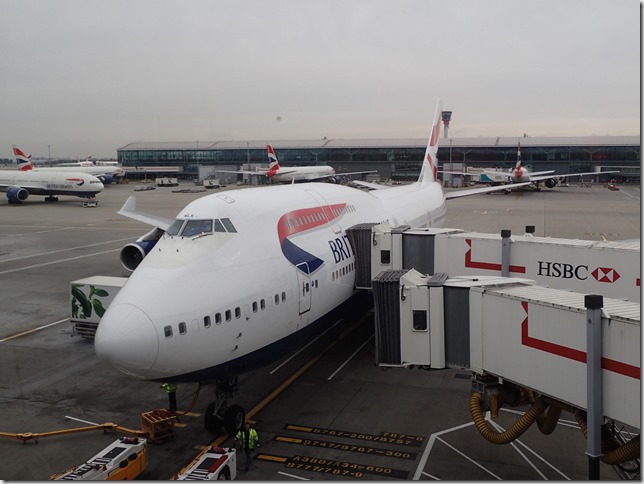 So we arrive at the new gate only to learn the flight has been delayed for an hour plus. It turned out the original plane had a mechanical problem and they had to bring in a replacement plane. Think back to our Feb 24 departure from DFW on BA when the plane had a problem and couldn’t be repaired because they had to fly the replacement part in from Heathrow to Dallas. Not that we have problem with being afraid to fly, but two planes, two problems both on BA? We only had to think of Norwegian Fjords, Kinky Boots and Jersey Boys to know that it was still an awesome trip. 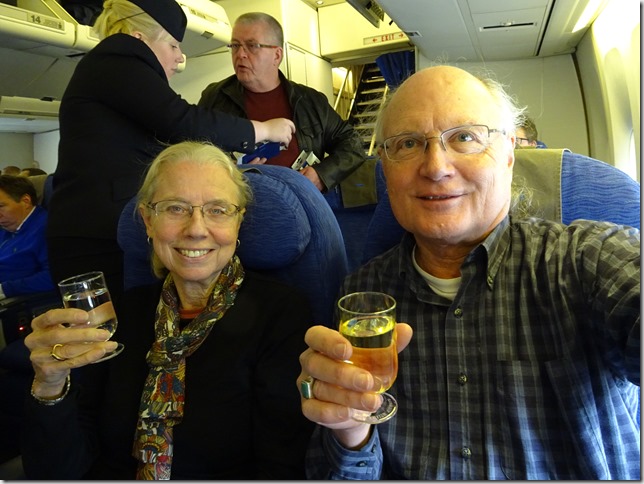 Once we boarded the plane we weren’t sure what happened. Our tickets had us listed as World Travelers something or other, and we ended up in the business class section of the plane. Super luxurious seats, champagne before takeoff and even real metal silverware with our meal. I know we have flow a huge number of miles with this alliance of airlines, but this was certainly most unexpected, but also most appreciated. If Linda’s champagne looks a little pale it’s because she was having water. If it makes her happy, it makes me happy. On the other hand, free champagne and wine is right up my alley. As they say, “When Life hands you roses, smell and enjoy them.” We did. 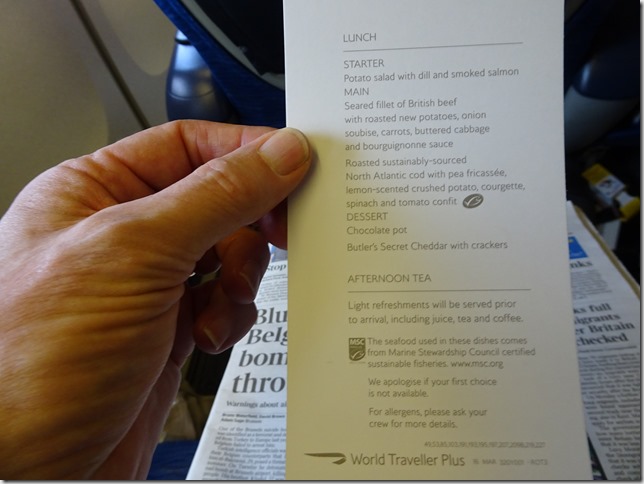 I really like being a World Travel Plus flyer. And can you believe it, one of the choices was fish. Happy Fishetarian Bob. 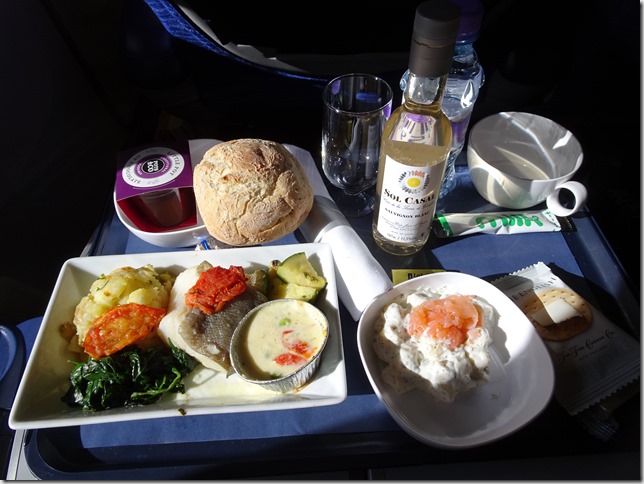 As good as any meal we had in London. And even though the Spanish white wine was in a plastic bottle, it was the perfect accompaniment to my cod meal. Definitely Delighted Bob. 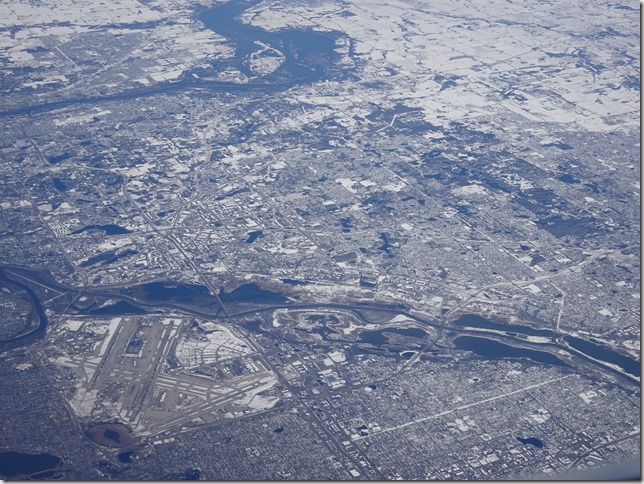 No, we did not divert to Norway, it is St Paul, Minnesota. I could say something about the mentality of those who would live here in the winter, but having friends and cousins who did just that before retirement, I’ll be good Bob and say nothing further. Readers, however, are allowed to think what I can’t say. Courteous Bob. 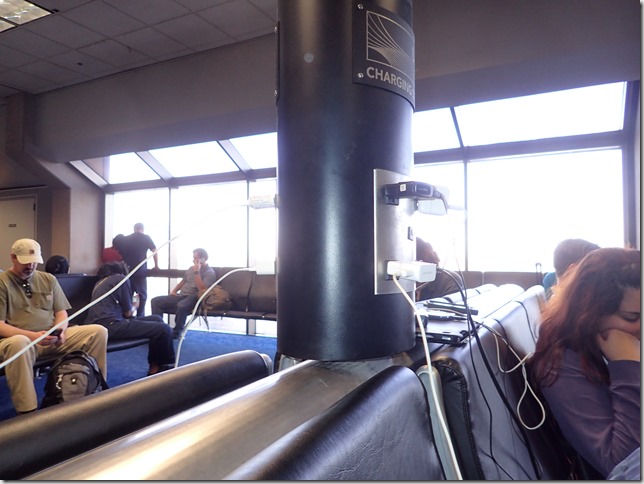 This photo has nothing to do with what happened at DFW after we arrived. Well, in a way it does, because we were there so long all our electronic devices needed major recharging. Just let me say that American Airlines, our least favorite airline in the whole wide world, and we have flown a lot of airlines around the world both in my working life and in our retirement Life, had a total of four gate changes and four time changes for our flight from Dallas to McAllen.

When it comes to Good People, our dear friends, Roger and Dianne, said they would still pick us up at the airport even though we weren’t arriving until almost 11:30, many hours after we were originally scheduled to arrive.  We said we would take a cab, they said no way. Special Friends, Special People. It is what Full-timing and living at Retama are all about. It was midnight when we arrived back at the coach, but as Dianne said, “It’s great to know we can still do what once did as much younger people.” Grateful Bob and Linda. Awesome Roger and Dianne.

Life is meant to be Lived. May you Live your Life as we fully as we Live ours.

P.S. If you ever get the opportunity to see Sunny Afternoon, Jersey Boys, Kinky Boots or The Play That Went Wrong, in a Live performance up close and personal , do it. You’ll never look at Life the same again. What An Awesome Time We Had!