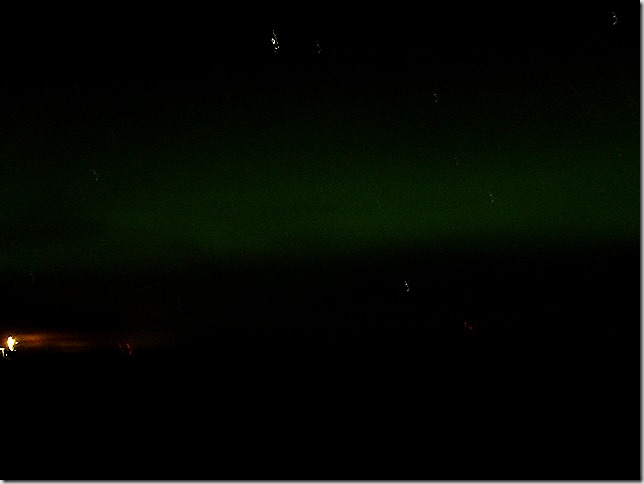 It was after midnight  while waiting for the ship to dock that a walk on the outer deck revealed the northern lights. All told, between the two periods of darkness today we took over 175 photos of the northern lights, some not too bad, many not so good. Maybe after the trip is over I will do a post of the best ones. That should be good news as it means there will be a limited number on northern lights photos in this post. 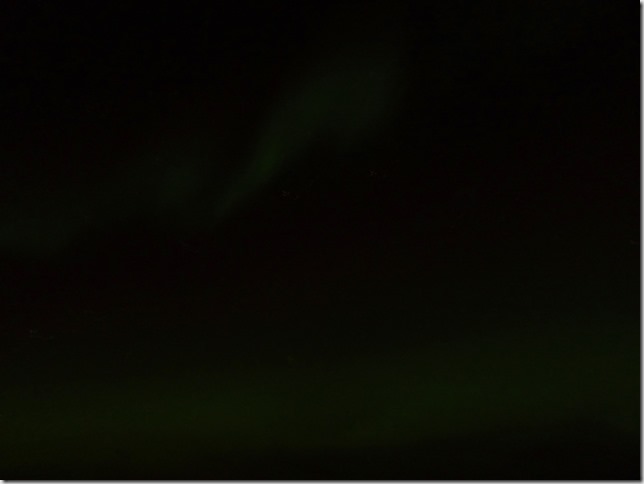 There was a fair amount of activity in the sky tonight, which we hoped would be even better during or snowmobile outing. 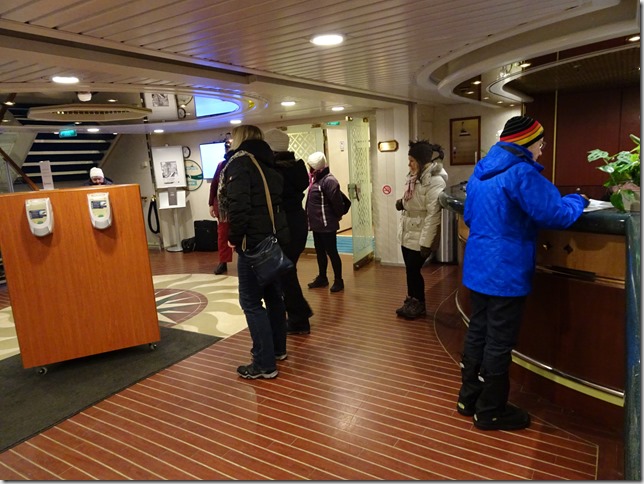 Waiting on the ship to dock in Mehamn. 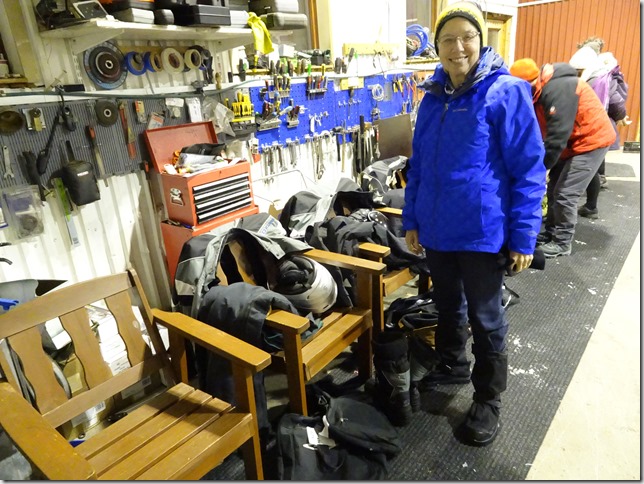 Getting ready to rug up. Linda sure looks wide awake for it being 1:30 AM. 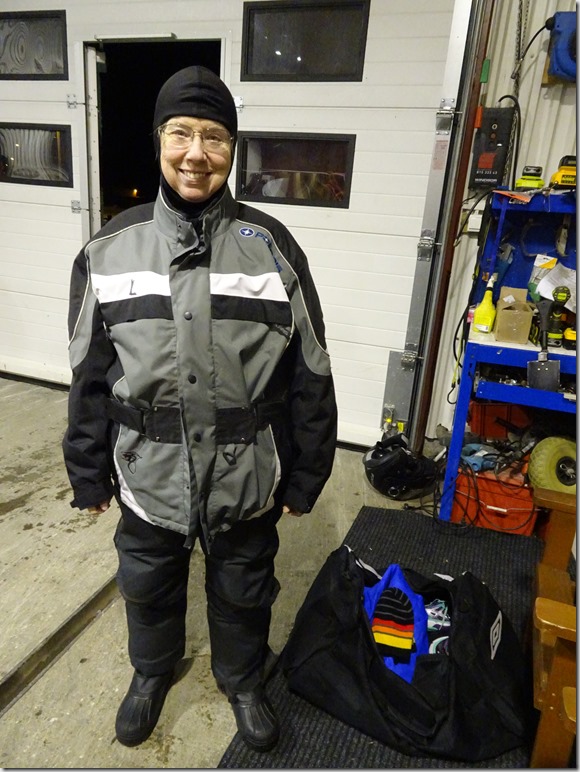 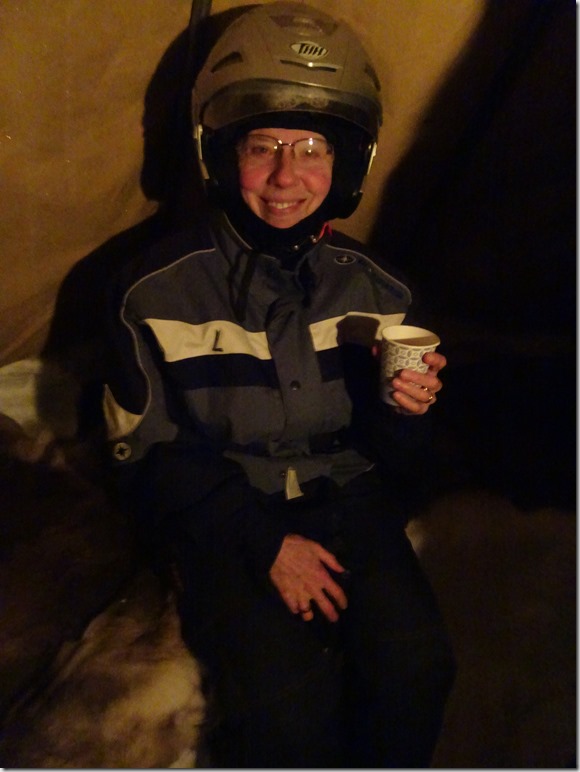 Resting with a hot lemon drink after a fun ride in the dark. No photos of the ride. It was a lot rougher than the one earlier in the day and Linda was busy hanging on and holding the video camera. 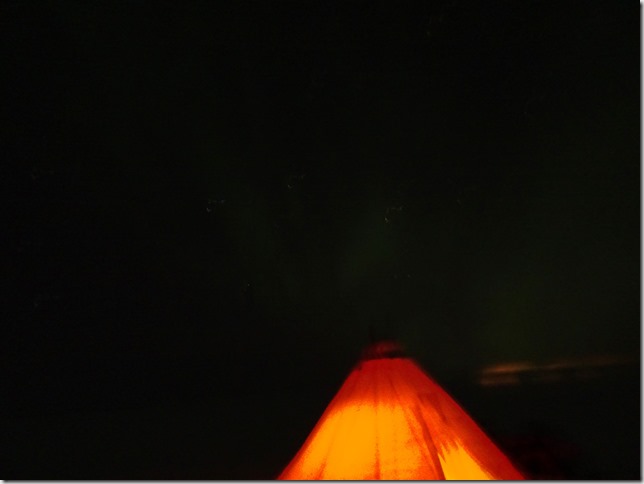 Not as spectacular as we hoped, but still, it is  the northern lights over our Sami tent. 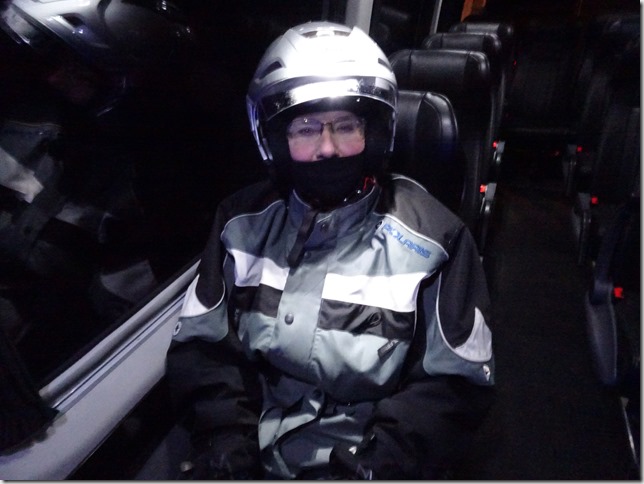 You can’t see it, but she was definitely smiling. There are things we wonder if it will be worth it before we do them. Afterwards we wonder how we could have ever questioned whether it was worthwhile doing. But best of all, in just over 2 weeks we will have the memories of tonight, while sitting outside in 80 degree temperatures. The best of both worlds. 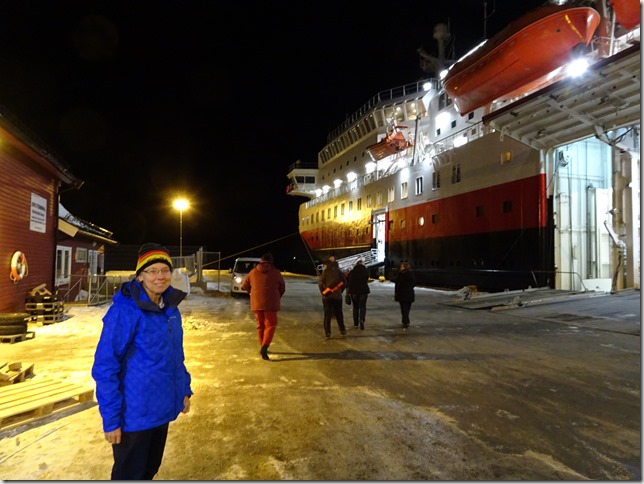 Back at the ship, which is now in Kjollefjord, at least I think it was. At 3:45 AM she is still smiling. 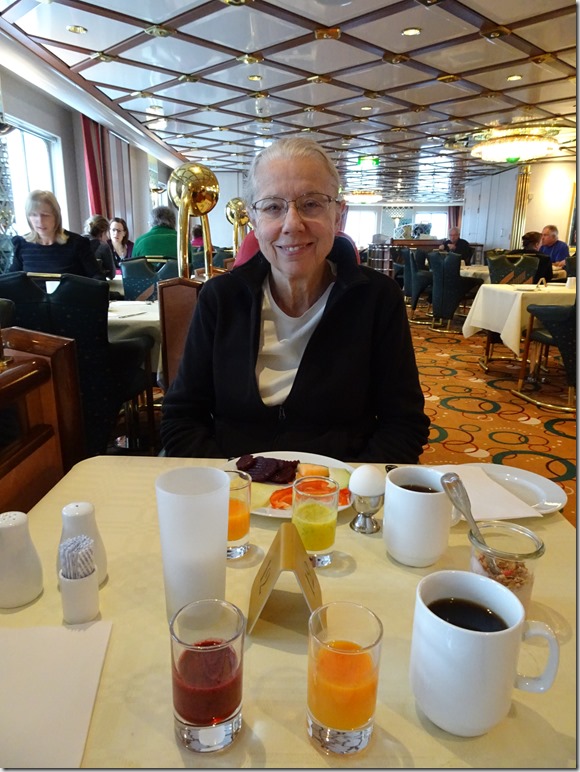 8 AM, and while looking a little worse for the two snowmobile rides in the last 22 hours, she can still smile, at least a little bit. The lack of a big smile may have something to do with the fact I was up at 6 AM making noise. Reminder to self: Never ever again ask Linda if she is awake at 6 AM when she went to bed at 3:50 AM. Beaten, Battered and Bruised Bob, aka Bad Bob. 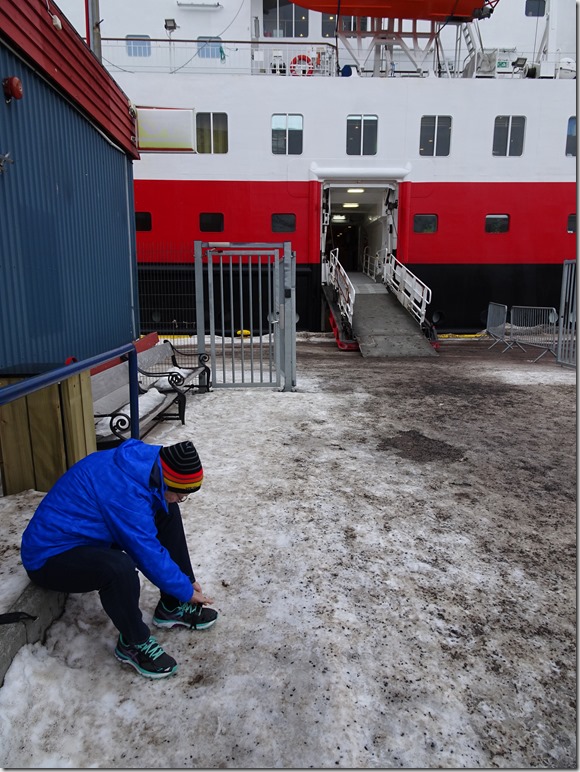 The icy sidewalks of Honningsvag have met their match in studly Linda. 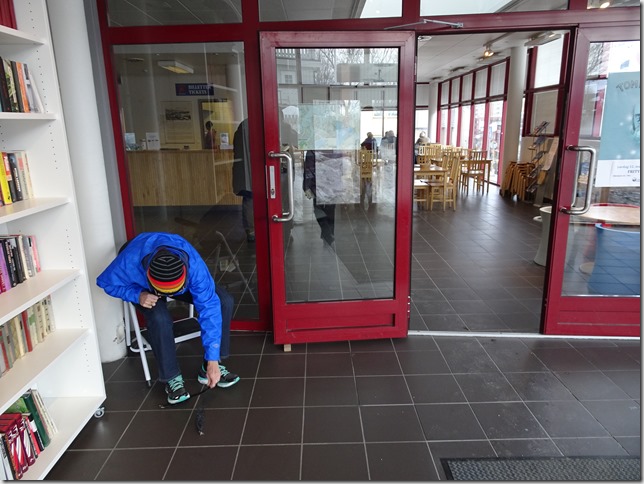 She wasn’t going to sound like a lost tap dancer in the Reconstruction museum, so off they come. 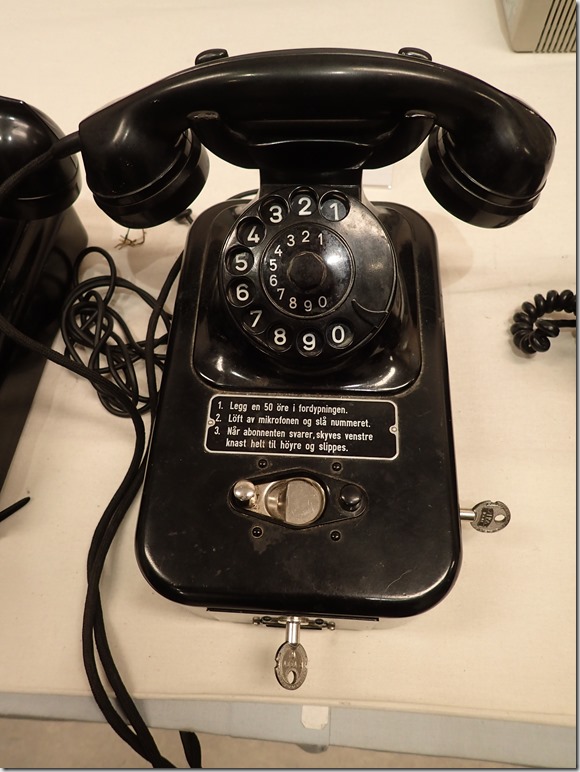 Linda was completely captivated by this telephone. Apparently it was a payphone. I hope the fact I posted it gets me a little way out of the doghouse for waking her. Apologetic Bob. 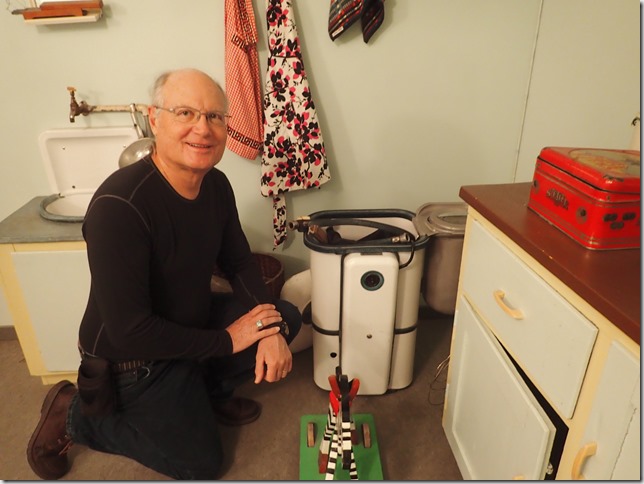 Linda was blown away by the small size of this clothes washer that was sold after WW II. It was sized to fact there was an enormous housing shortage in the north of Norway as the Germans had burned every town to the ground. 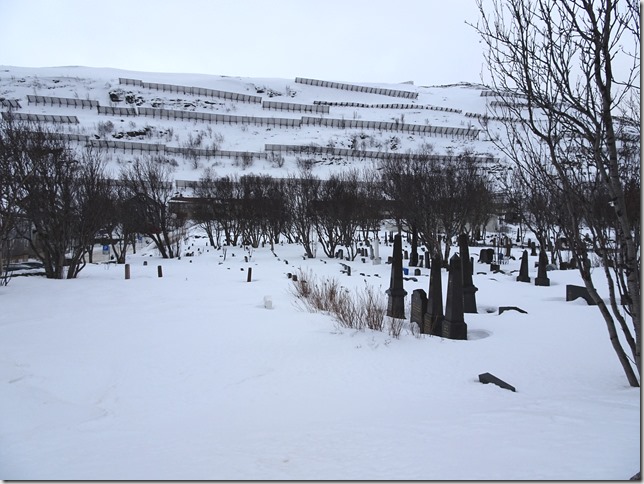 Snow fences on the hillside above the town cemetery. 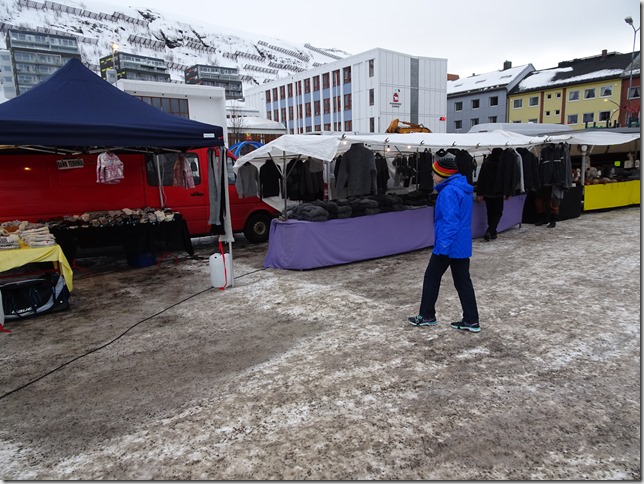 Just because it is winter doesn’t mean the outdoor markets have to close. I also want to point that being a wonderful husband, I won’t post the photo of Linda putting one of her stud straps on upside down with the studs against the sole of her shoe. Just another step towards making up for my past mistakes. Considerate Bob. 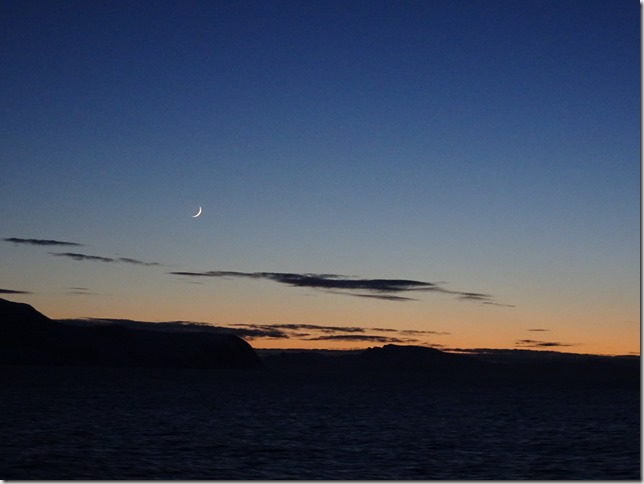 A very pretty sunset tonight. In fact this may be the first time it hasn’t been cloudy at sunset since we arrived in Norway. The funny thing is that until now we hadn’t even noticed that. 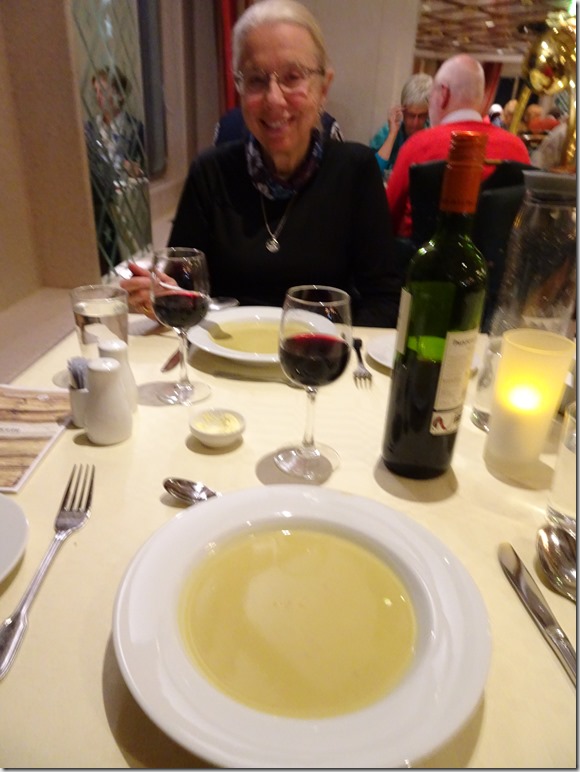 Caviar soup tonight. Linda surprised me by not only trying it, but by eating all of it except for the caviar itself. Not wanting the caviar to go to waste, I ate it for her. 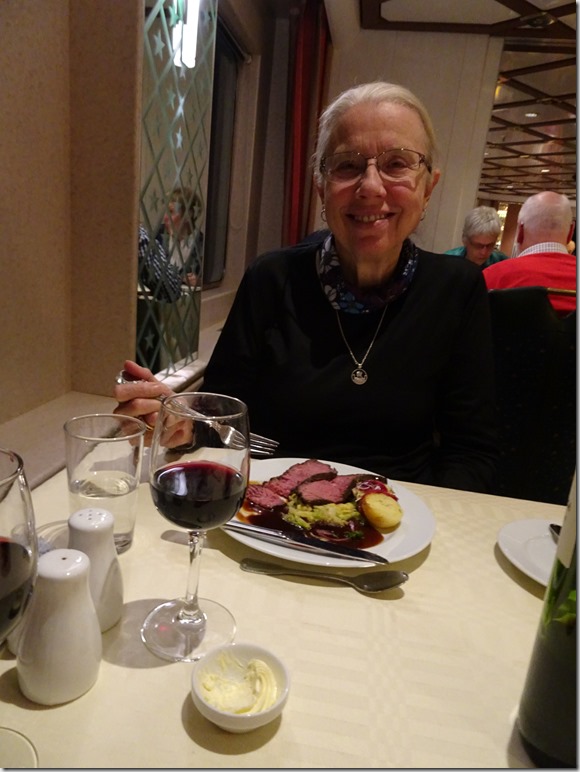 That is beef, cooked to absolute mouth watering perfection. And it was all gone when she finally put her knife and fork down. Linda, you’ve come a long way, Baby! 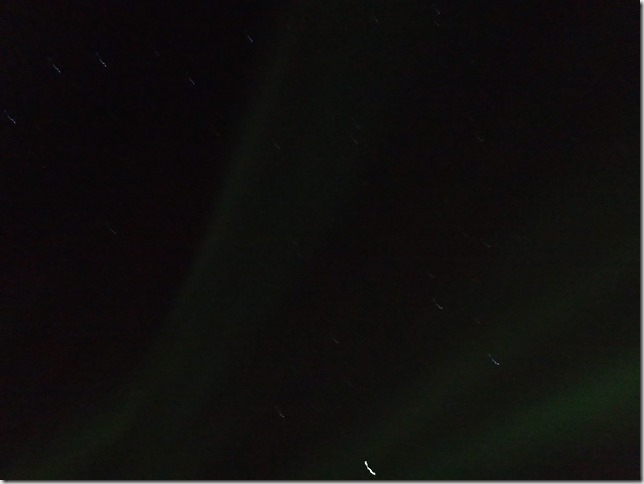 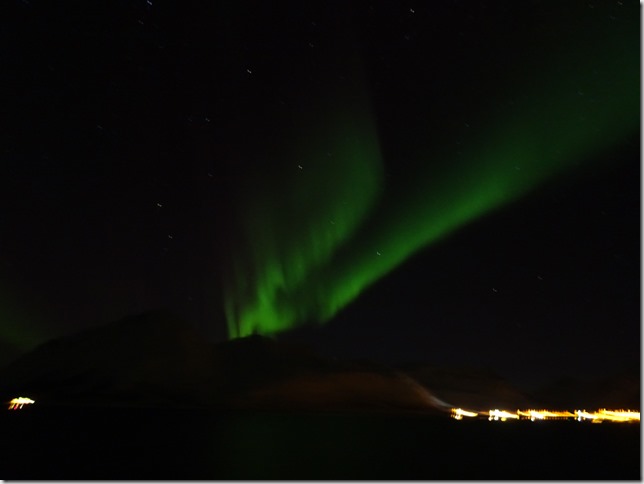 It made it worth it just to see the lights dancing in the sky. I tried to make a video but it just turned out black. 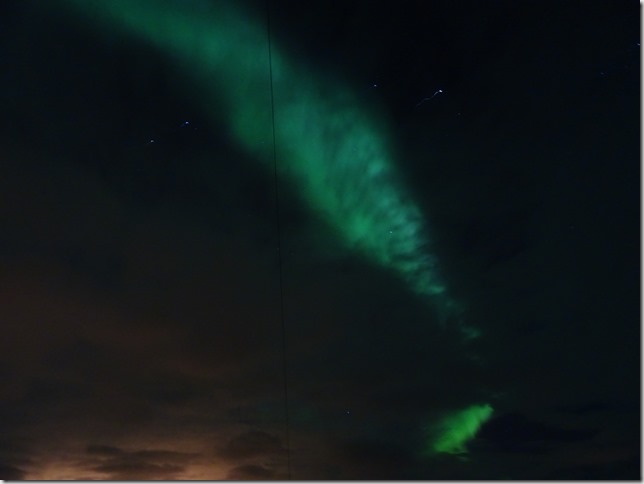 Green and blue this time. 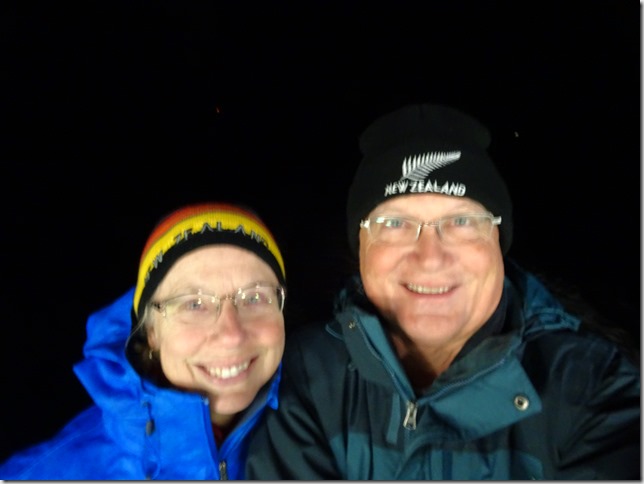 Selfie of the day. Two happy northern lights watchers. Just another reason to travel to Norway in the winter.