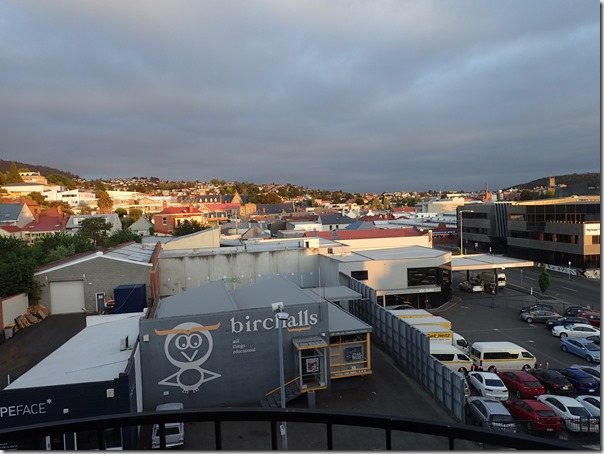 The view from our window this morning. For a tour company that advertises 3 1/2 and 4 star hotels, this is not what we expected our view to be. Traveling on our own we stay in lower class hotels and have better views. Maybe I am still feeling the unpleasantness of our overcooked fish at our OAT included for dinner last night. Grouchy Bob. 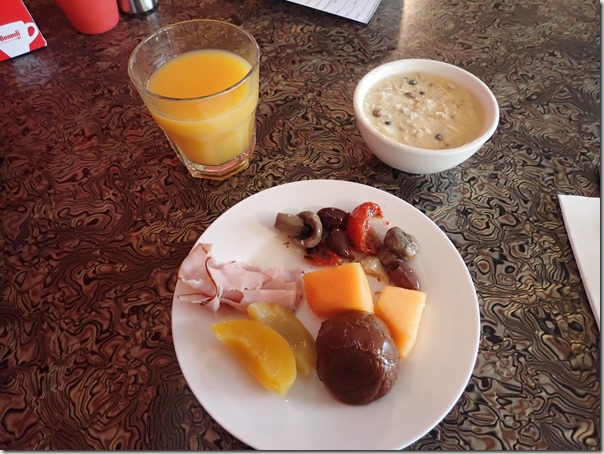 Breakfast was buffet style. It most definitely wasn’t up to the level we had at the Customs House. Definitely Grouchy Bob. 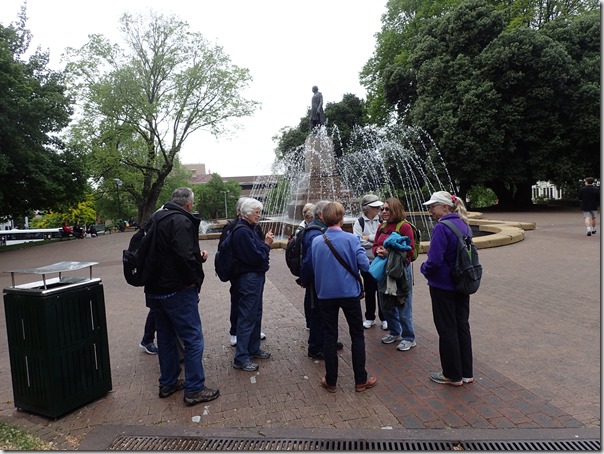 We started off the morning with a city tour. Linda and I had trouble understanding why a guide with a soft voice would chose to stand by a noisy fountain to give a lengthy monologue on the history of the immediate area. Not trying being picky, just trying to give an honest review of the mornings events. 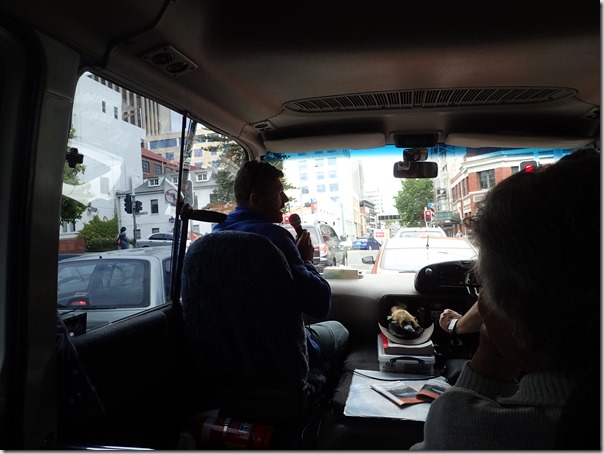 Heading down to Port Arthur, the most notorious of all the convict sites. Troy filled us in on all we were seeing and often had us laughing at his bad jokes, while Gordon, who will be driving us around Tassie was also great. I guess I could say, previously I gave the bad, now I’ve given the good, and with photos of me coming up, the ugly will also be included. 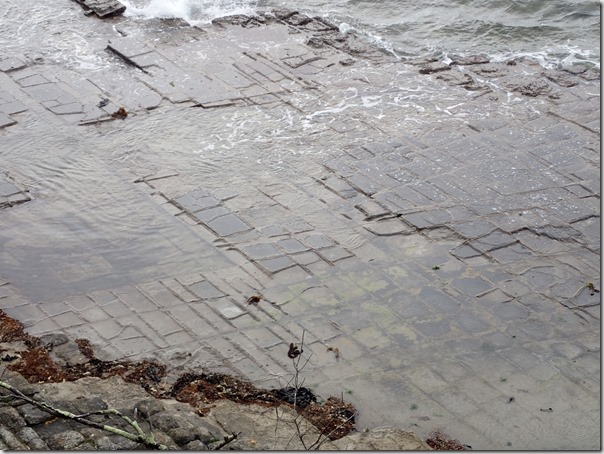 Troy told us that in the mid 1800’s Angelo and Giuseppe Tesselini emigrated from Italy and settled in this area. Trained as stone masons, but unable to find work they decided to show off their skills by carving the rocks along the shore near their cottage into a tile like pattern. So that was the story he told, but the real story is that it is Tesselated pavement, a natural pattern of erosion of the rocks caused by the deposition of salt crystals and wearing away of the rock by water. Personally I liked Troy’s version much better. 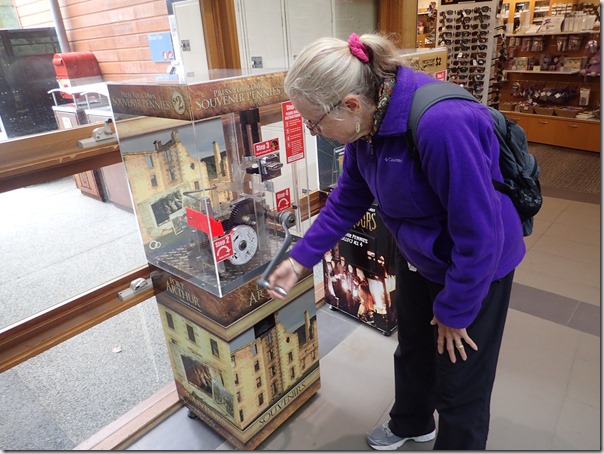 Long time readers know exactly who is getting a smashed penny. Just before we left the States, our grandson Zachary texted us asking us to be on the lookout for any penny smashers. The best part was that we had checked the penny smasher website and it wasn’t showing any penny smashers at the places we were visiting. Sara N. Dippity helps us out once again. Lunch at the Port Arthur visitors center. During our overseas travels we have time and time again eaten wonderful meals at historical sites and museums. Today was no exception, especially since we had gobbled down almost all of our food before either of us thought to take a photo. It was an egg and cheese pie for Linda and and a steak and mushroom pie for me, both being absolutely wonderful. The photo shows less an a fourth of the Hedgehog Slice we had for dessert, at least that’s what the label said. Think decadent chocolate and nut dessert and you have an idea of what it was. Very Happy Linda. 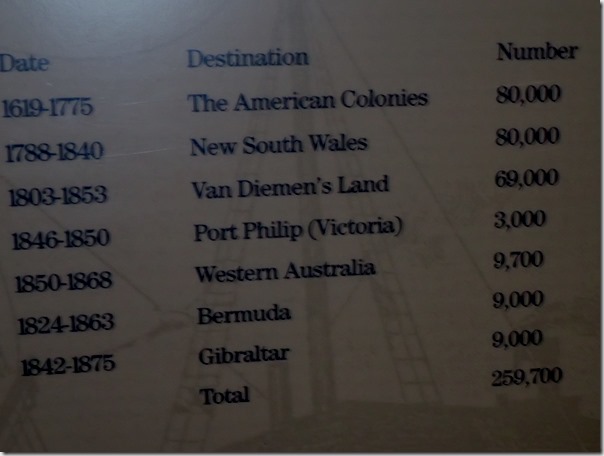 I keep saying the British sent convicts to America, there it is in black and gray. 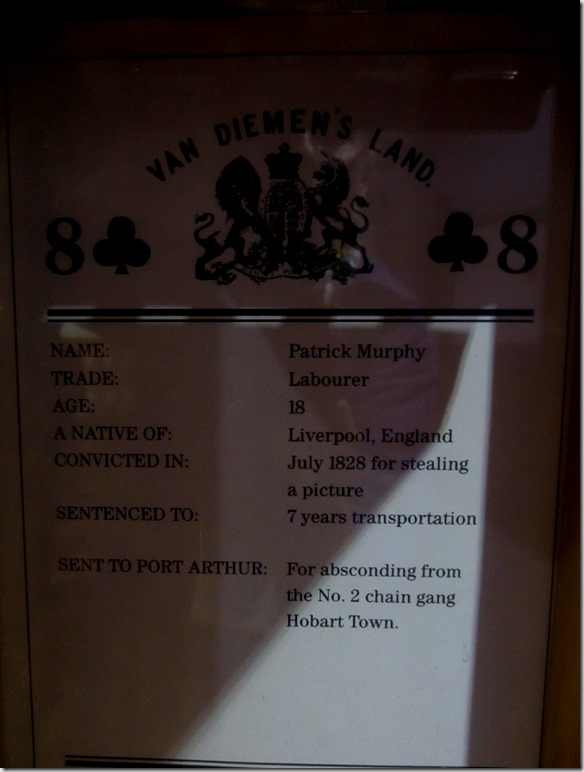 As part of the entrance package we each received a card we used to find out which actual convict we were. Linda received the eight of clubs and was transported for seven years for stealing a picture. Then was sent to Port Arthur for running away from a chain gang. 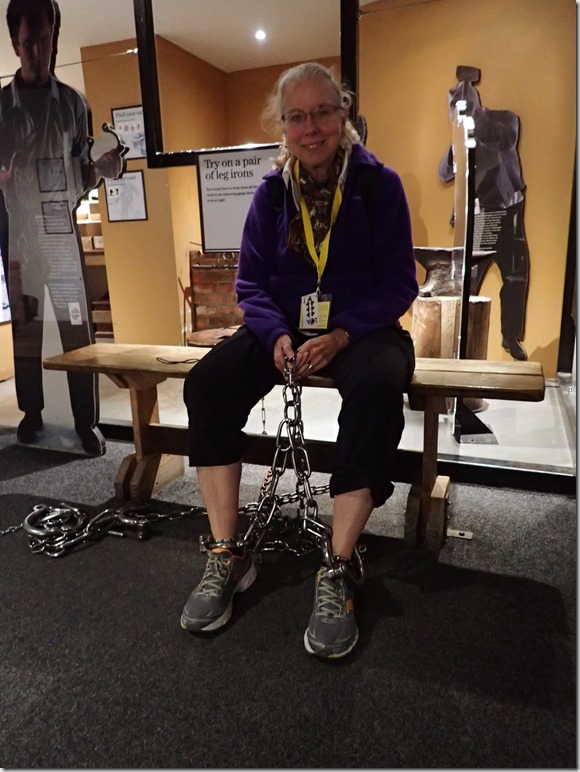 Later we learned that she ended up in leg irons. But just why is she smiling in this photo. Is it possible it is because she has finally found something that might keep me in line? 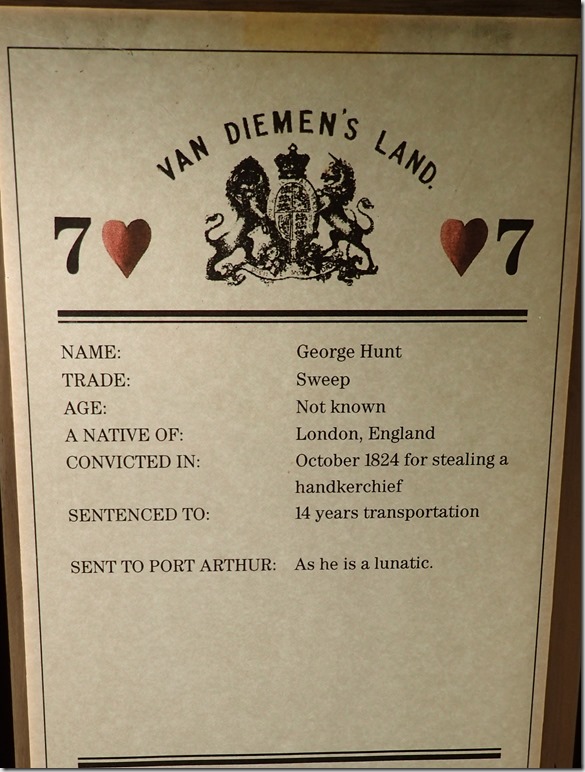 My card told a different story. All I did was steal a handkerchief and for that I got 14 years. Linda however skipped all that and went straight to the bottom line. Both literally and figuratively I might add. She looked at me, smiled and said, “Obviously the correct card.” At least she understands me. Bob the Idiot. 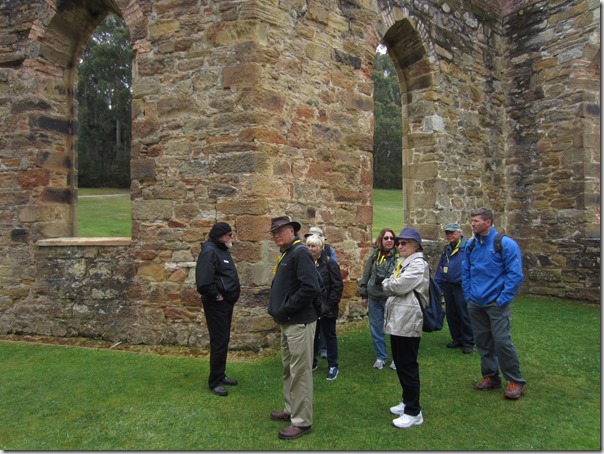 A walk around the grounds at Port Arthur with a guide brings the site to life. 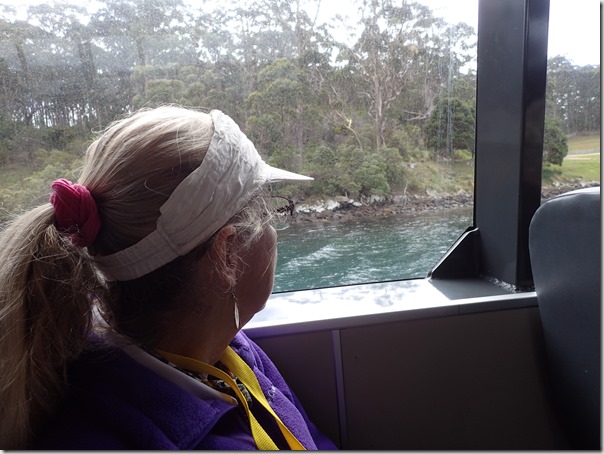 A boat trip around the Island of the Dead where the convicts were buried, hundreds and hundreds. 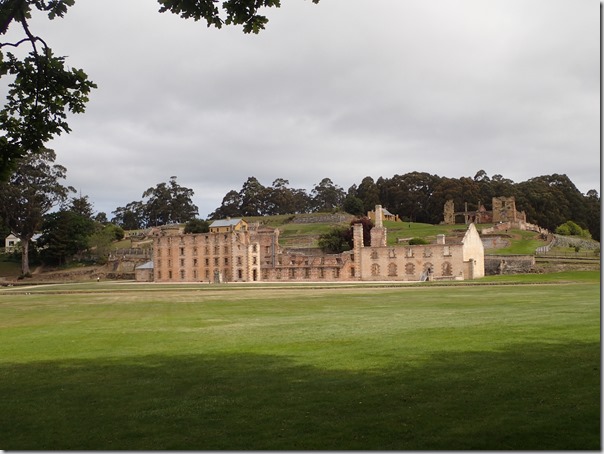 What remains today does not even begin to speak of the horrors that took place here. 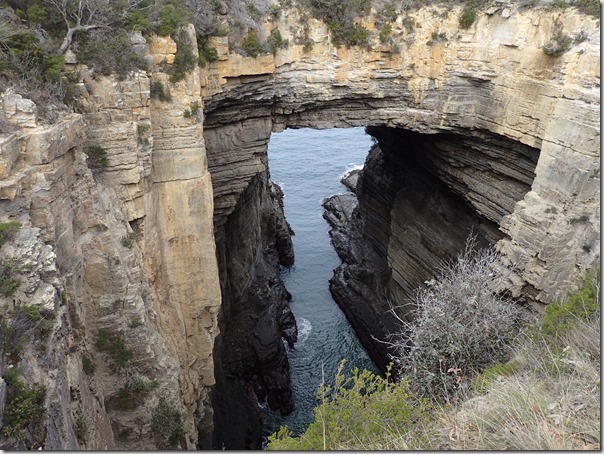 A stop at Tasmin Arch where the sea has cut through the sandstone. Tasmania is the only place in the world where you see these signs. It is to watch out for Tasmanian Devils crossing the road. Small world category. what are the chances would be sitting with people we knew at the Hobart Playhouse. We were on our own for the evening so we had secured seats, right up front in the third row I might add, for a performance of Forbidden Broadway. It turned out the actor who who had played the four different characters yesterday, remember the photo of Linda and the other criminal, were sitting right in front of us. Talk about a good time was had by all. We even got to met the play's director, and learned Colin will be off to Sydney in two weeks for a role in Sound of Music. Sara N. Dippity was working overtime tonight.