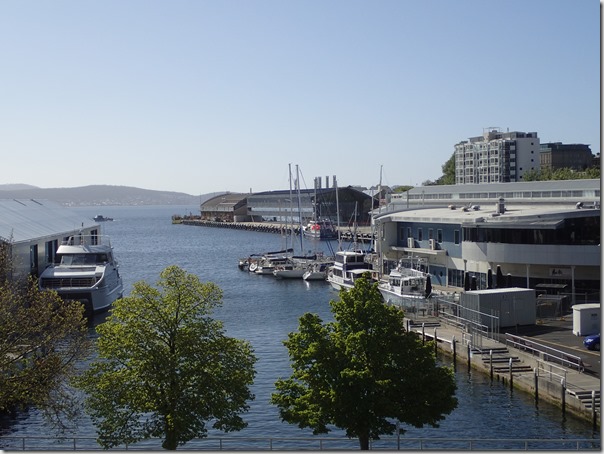 Our last day on our own until we are on Fiji in early December, that’s December as in June for those of you on the upper side of the equator. The view from our balcony suggested that today was going to be another of those nearly perfect spring days in Hobart. More weather like this and we have to rethink returning to the Rio Grand Valley in January. Not really, but April through October in the US and November through March down under is sounding mighty appealing. As Linda is fond of telling me, In your dreams Bob, in your dreams. But a fellow can dream, can’t he? 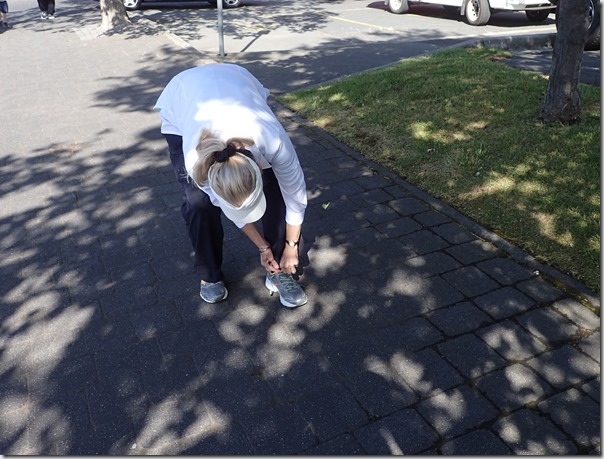 We took another long walkabout today, heading off to the Royal Tasmanian Botanical Gardens. You know how they say that before you buy an animal you should always check their teeth and feet? Somewhere along the way I missed the addendum to that rule that suggested conducting the same checks on a potential wife. Why she can never seem to get her shoes tied properly before we begin our walk is a mystery, one that will likely never be solved. Could it be that she failed shoe tying 101 in elementary school? 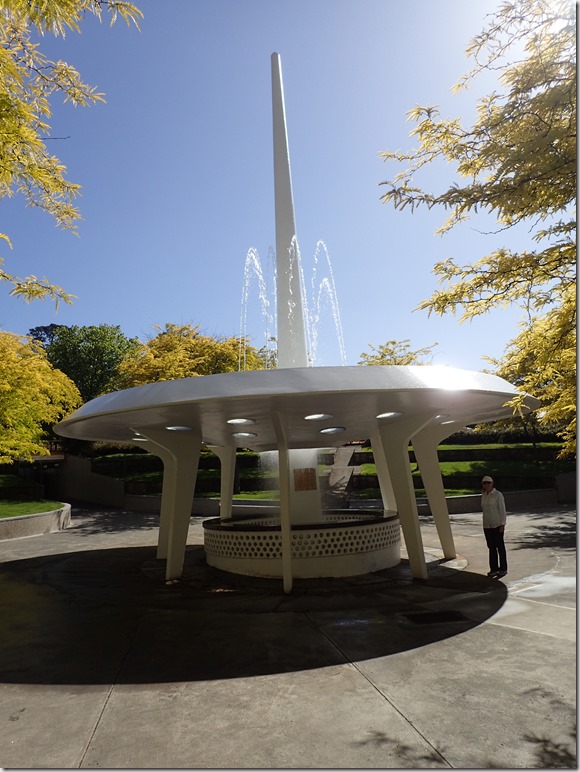 When you head down into a tunnel to cross under a roundabout on a walkabout you never know what you will find. 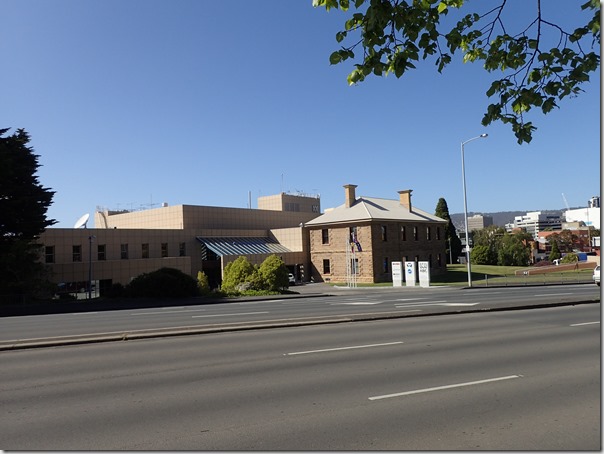 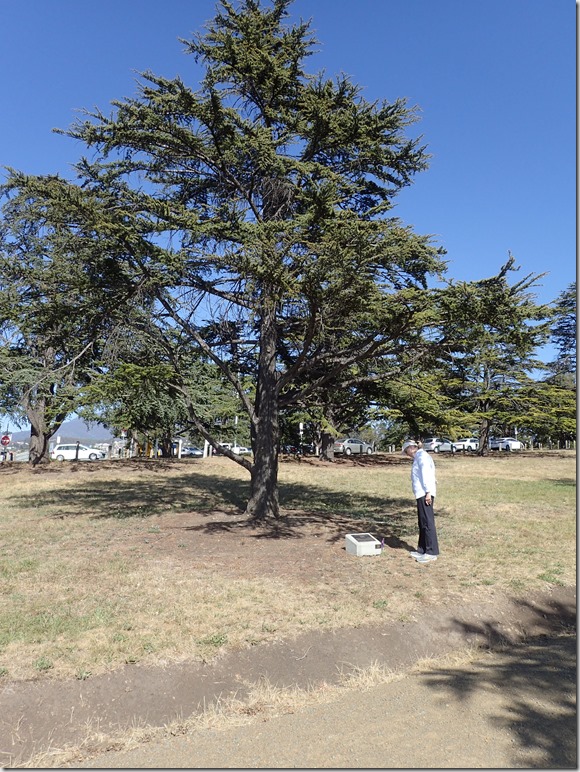 Soldiers Walk. 530 trees each with a memorial, commemorating the soldiers from the Hobart area who lost their lives in World War I. 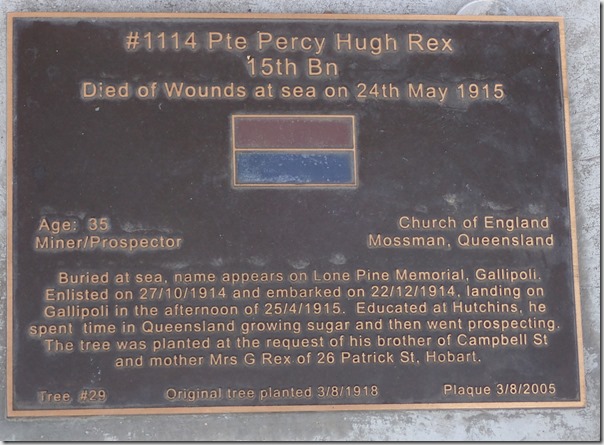 The plaque of Private Percy Hugh Rex, one of the more than 60,000 Australians who lost their lives in World War I, a war that was called the war to end all wars. 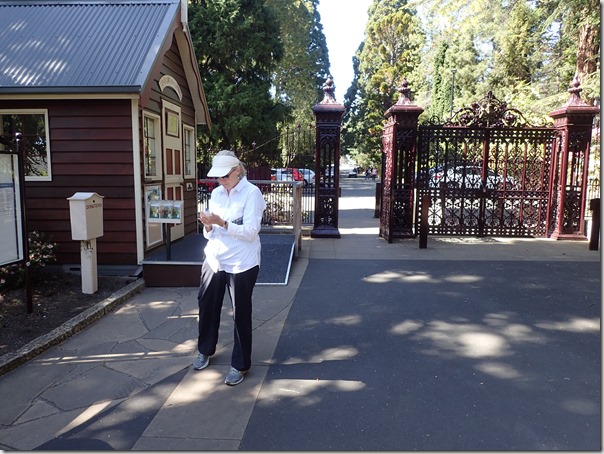 During our travels, actually during all our decades together, Linda has kept an accurate accounting of our finances. Here she’s writing down what I put into the donation slot in the white box to her right. You know that old saying, you can take Linda out of accounting, but you can’t take accounting out of Linda. Or was it, on no account can you account for Linda? Something tells me it likely she would call me, no account Bob. 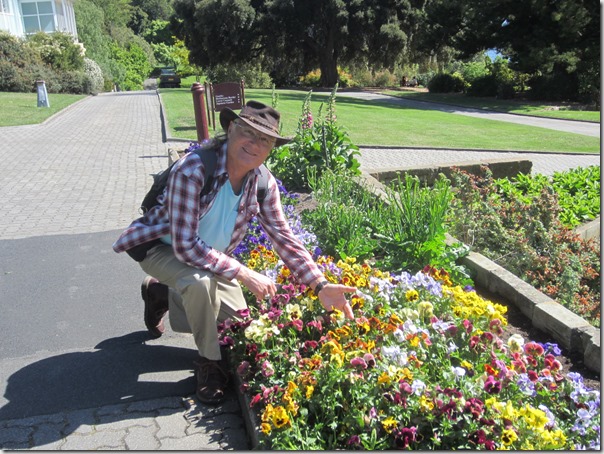 Homage to my Dad. Pansies were his favorite flower. I have never been able to look at a bed of pansies without thinking of him. 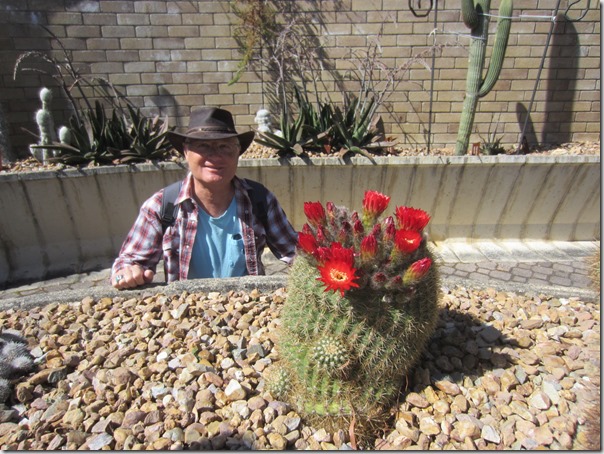 Linda asked this handsome young male model to pose behind this colorful flowering cactus. I was happy to oblige, but what was that comment I thought I heard her make about this being a perfect duo, two good looking but very prickly things together. And to think, I’ve never even had an unkind thought about Linda, let alone expressed it. Delusional Bob. 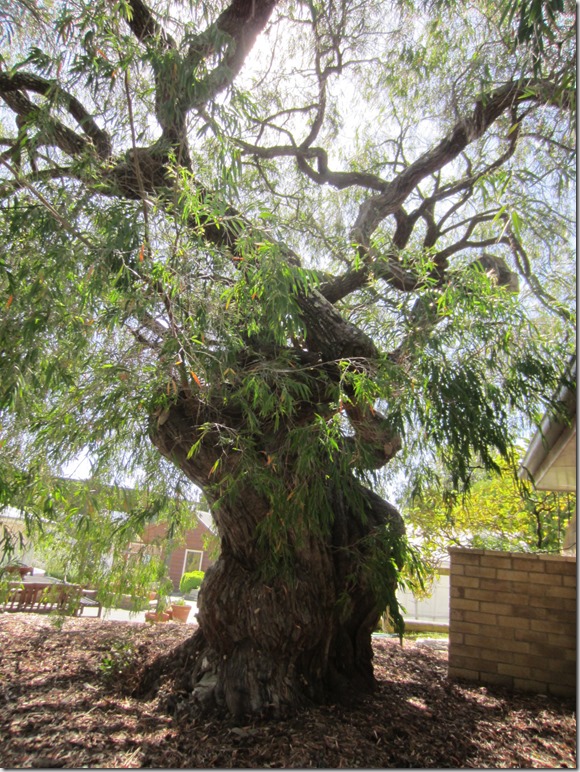 Some trees have a problem deciding in what direction they want to grow. 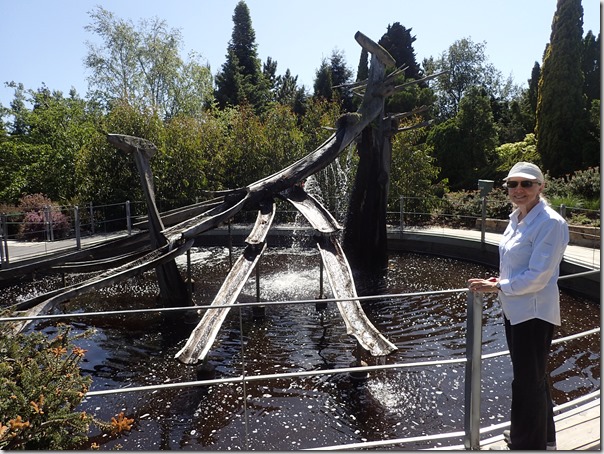 Definitely not your everyday fountain. 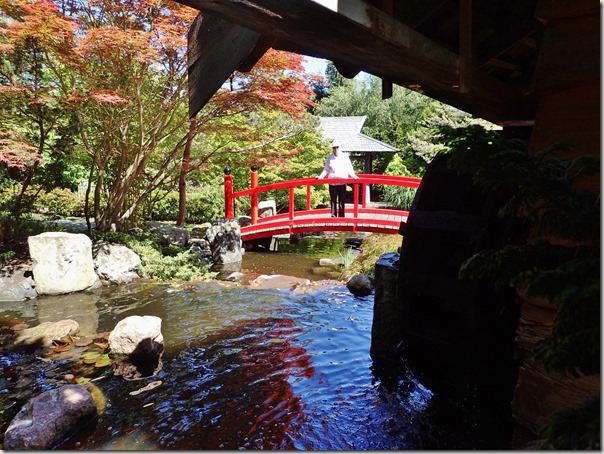 Beauty on a Bridge. 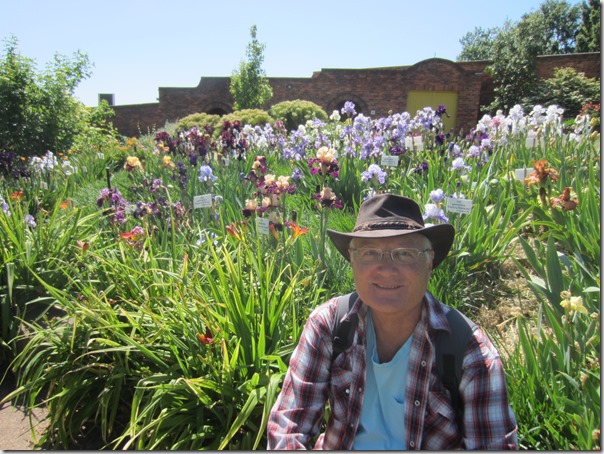 Happy Bob, my favorite flowers, Daylilies and German Iris. They even had several of the same varieties of iris I grew back in the days when we owned a house without wheels. And while I miss growing them, I wouldn’t trade the freedom of our Life on wheels for anything. 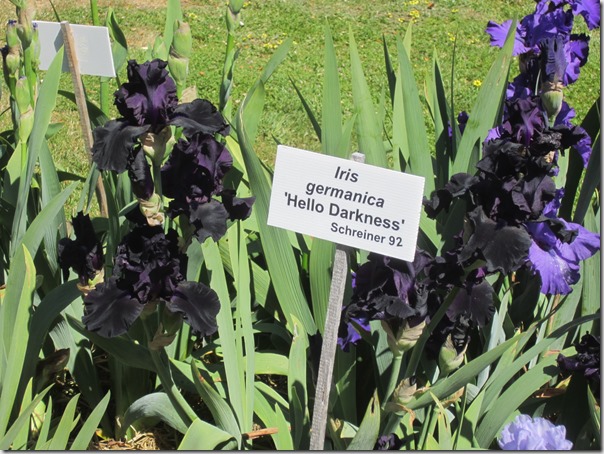 Hello Darkness, a near black, and one of my favorites. I know my daughter dug some rhizomes of it when we sold the house. Isn’t interesting how we pass our heritage from one generation to the next. 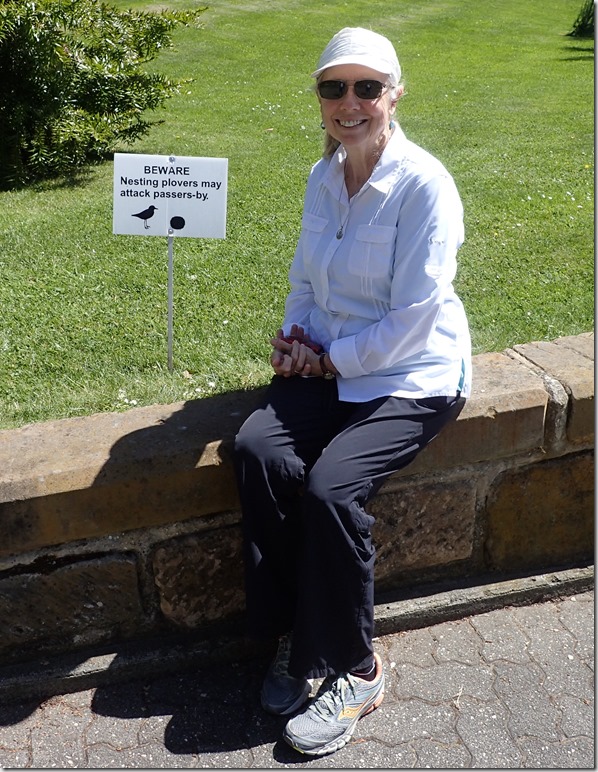 I’m happy to report that there were no Plover attacks reported during the taking of this photograph. 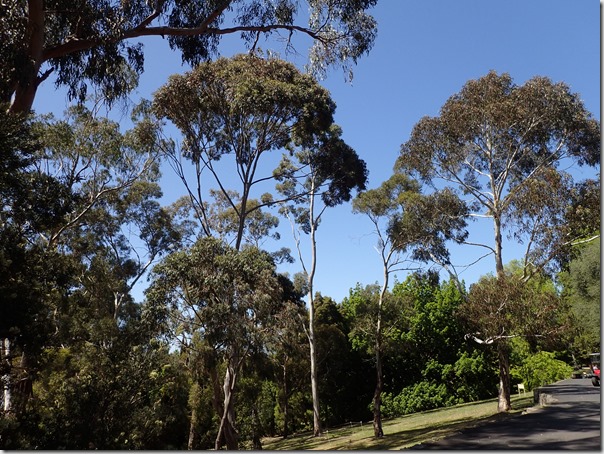 What can I say, I really, really love the shape of eucalypt trees. 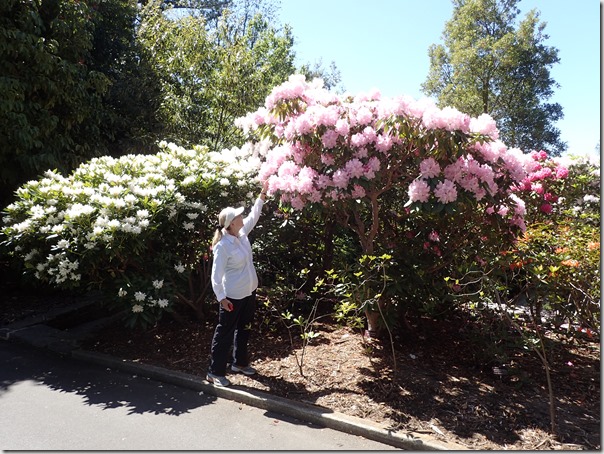 Have I mentioned it is spring in Hobart and the gardens were bursting with the blooms of rhododendrons. 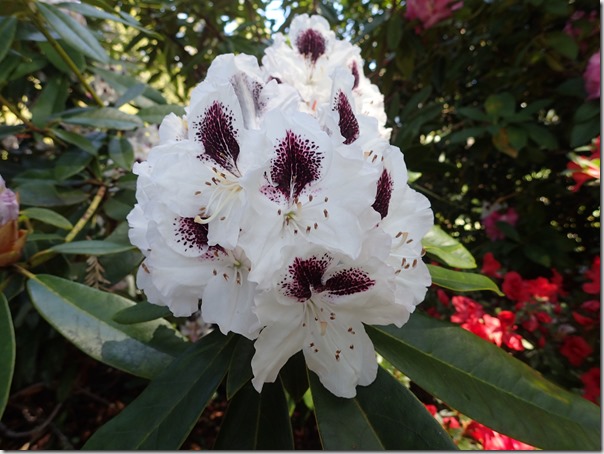 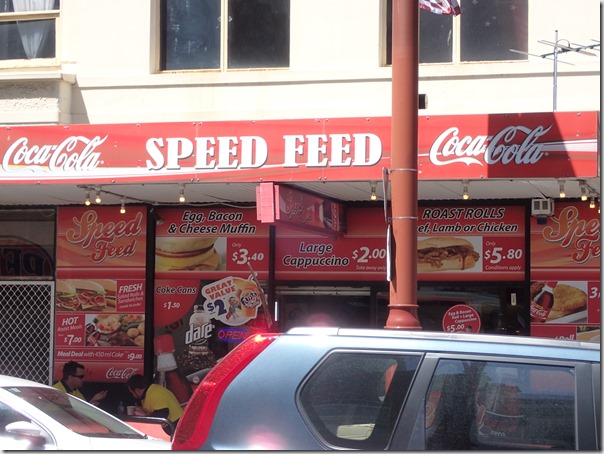 In Tasmania they sure know how to name a fast food joint. And no, we didn’t eat here. Heck, we were never even on that side of the street. However, there is always tomorrow. Just kidding, Linda. Just kidding. Jeeze Linda, of course I would never even suggest we eat there. 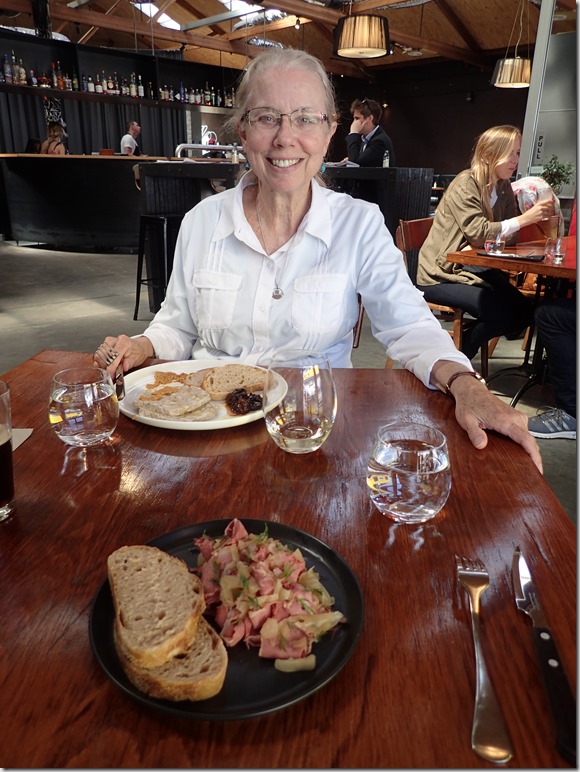 That smile is genuine. We ate our usual late lunch, and today it was at the Pumphouse. The food, it was way beyond good. They are straight forward about their food. It is of the highest quality, but because of that the quantities may be limited. I do believe that if I had tried to take a piece of Linda’s pork terrine I would have found a knife sticking out of my hand. And when she uses her bread to wipe her plate clean, something which has only occurred a couple of times in her Life, there is no higher compliment to a chef. 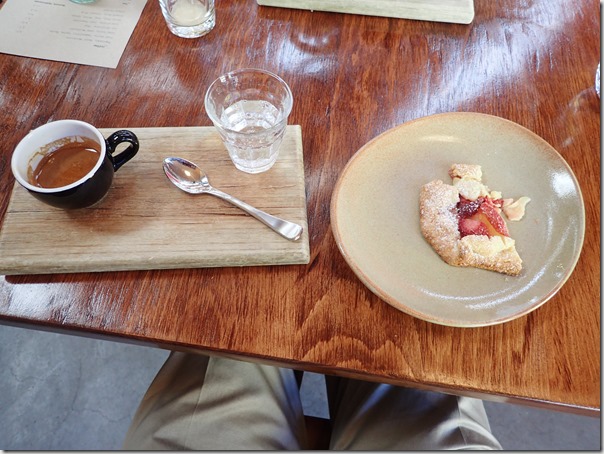 And how can I leave out the apple/strawberry tart, or the short black (espresso) with a side of sparkling water. We’re starting to think they have forgotten more about making coffee down here than America or Europe has ever known. Simply put, they have likely ruined me from ever again having espresso and liking it in the States. 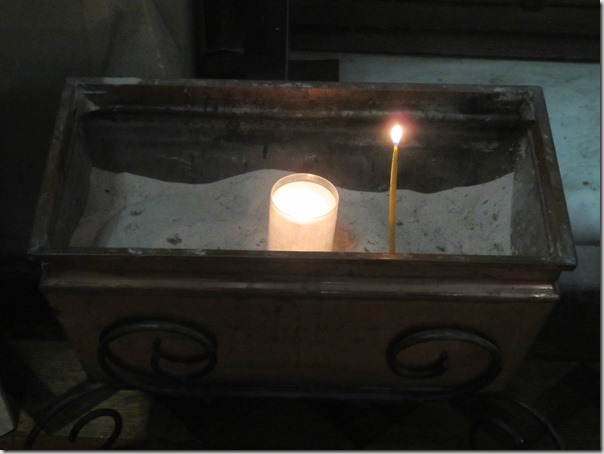 St. David’s Church. A taper burns for one of heaven’s newest Angels. 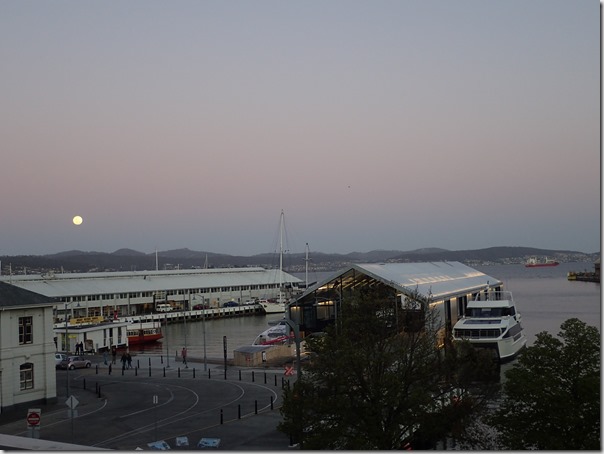 Hobart Harbor and Customs House Hotel, we will miss you.