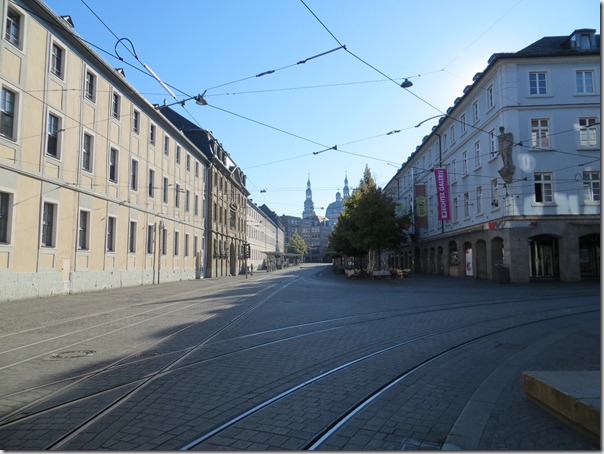 Early Sunday morning at one of the main intersections in the old town area of  up Wurzburg, and just outside the door of our hotel, traffic is non existent, people are non-existent, that is except for Linda and I who will soon be on our way walking Kaiserstrasse to the HBF where we will buy our Bayren Ticket and head off to Nurnberg for the next four nights. 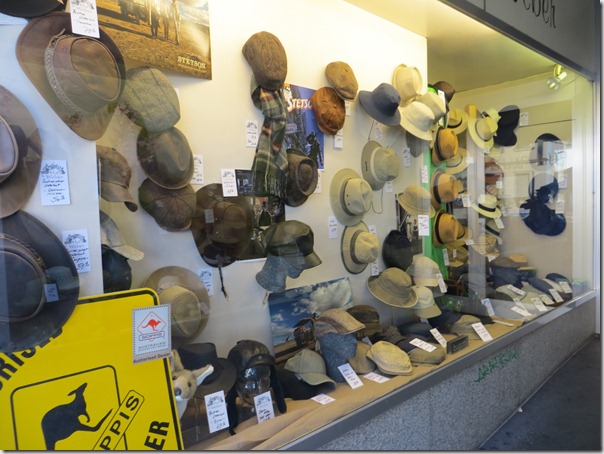 In the US, the downtown area of almost every town is pretty much vacant or nothing but  antique shops.  Not so in Europe, the downtowns are vibrant, very much alive and you hardly ever see a vacant store. Here is something that caught our eye, it was right next to a Lego store and had nothing but hats.  Women's hats, men’s hats, und kinder hutes.  We even saw one or two that Linda thought would be perfect for me, unfortunately we needed to be at the train station in less than one hour and the store was closed until tomorrow.  So no hats for Bob, but not necessarily an unhappy Bob. 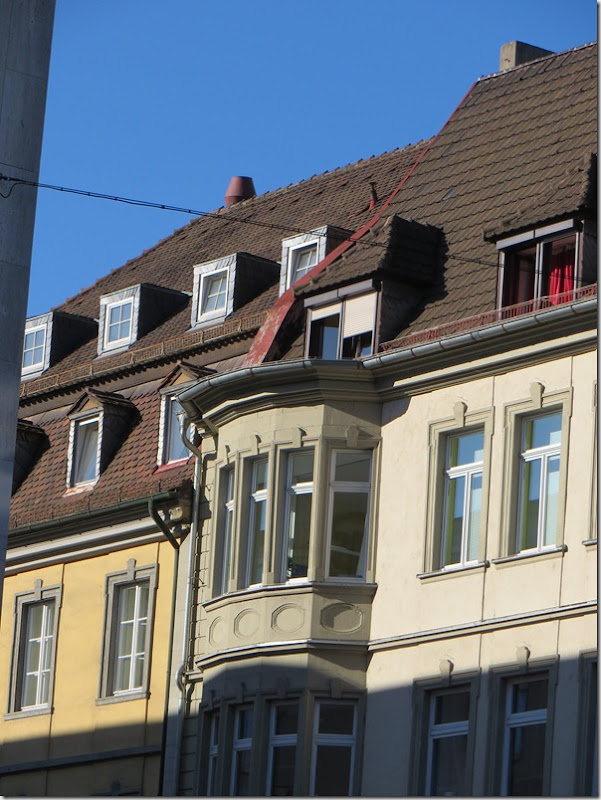 We have neglected to show any pictures of our hotel room in Wurzburg but no longer.  It is the tiny window above the copula.  Don’t think that someone had a huge hotel room suite below us, because the hotel was only on the 5th floor, which is the 6th floor in the US.  The copula one floor down was part of a doctor’s office.  Nothing wrong with staying in a Best Western, but it just isn’t for us.  For example, this morning at breakfast, we heard German, Spanish, and Chinese being spoken, and with only four tables in the breakfast room you are part of every conversation.  And to think all of these people are staying in a hotel that only occupied the 5th floor of an older building. 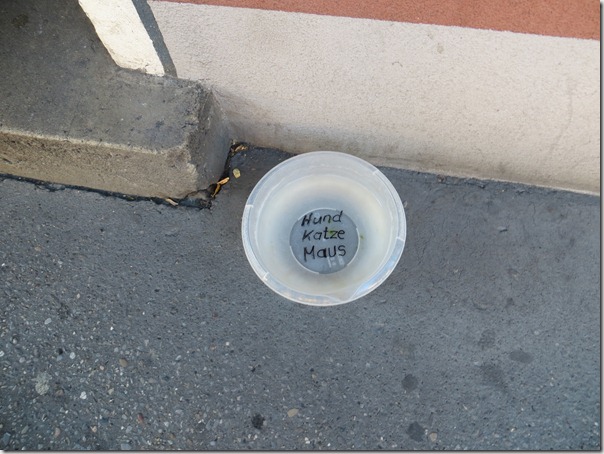 Translation:  Dog, Cat, Mouse.  On our way to the Hbf (train station) we passed a café with this bowl beside the door.  When would we ever see something like this in the US?   We made it to the Hbf with 10 minutes to spare, bought our tickets from the machine, walked to our Gleise (platform) and were soon on our way to Nurnberg.  We’ve done this so many times, it has become old hat and we chuckle at the people who stand near the machines obviously never having used them.  Once we were one of them, but now we are the typical experienced traveler.  Buying tickets that way is easy, just tap the screen (the first tap is for the language to be English, hint: it is not the US flag, it is the British flag), put in the money, take the tickets, get your change  and go. 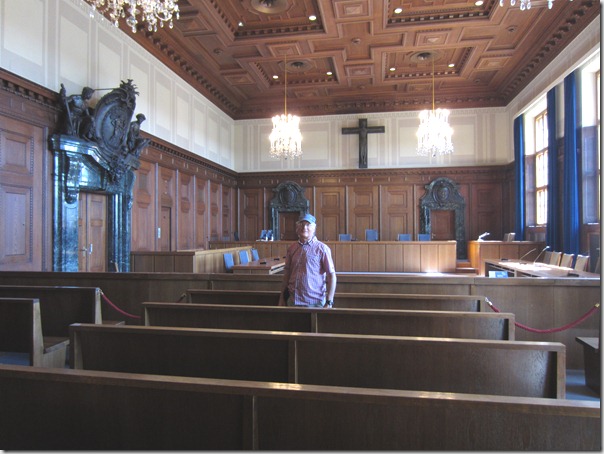 Our reason for heading off this morning for Nurnberg, that being Courtroom 600 at the Palace of Justice.  In late 1945 and much of 1946 this was the scene of the famous Nurnberg Trials were the Nazi leaders were tried for their atrocities during WWII.  Over the years, the courtroom has been changed from what it looked like at that time, but it doesn’t matter, because on the left side of the room sat Herman Goering, Rudolph Hess, and other twenty plus Nazis'.  One need only close their eyes and open their ears and history becomes real. 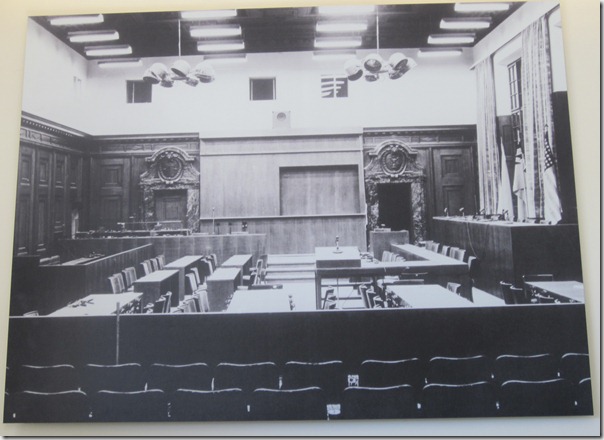 You can see the changes, but it really makes little difference, because the (ghosts) of what took place here will always remain. 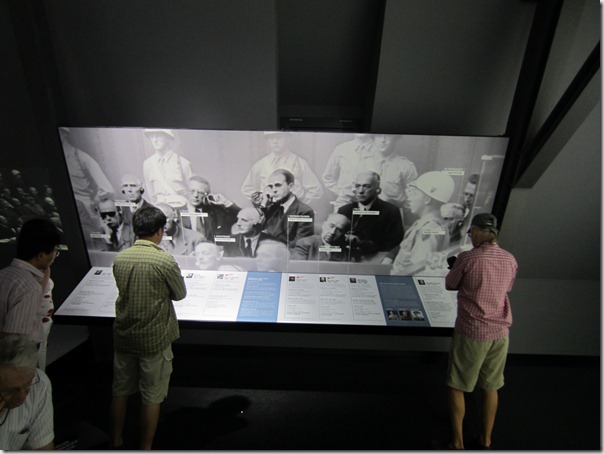 On the floor above the Courtroom which the old attic there is now a very moving museum that brings what transpired one floor below to life.  While the exhibits are in German, there are audio devices in virtually every language available.  It is almost impossible to listen to all of it without being reduced to the inability to understand man’s inhumanity to man,  We watched more than one young German youth crying as they read or watched what was going on. We can’t comprehend what was going on in their minds.  To realize it was their nation that did this.  I wonder how we as Americans would react to films of American soldiers murdering Iraqi or Afghani  civilians, something that has been actually documented.  Do we shrug it off as something that merely happens in war, or do we say never again and do something about it.  If Nurnberg means anything, we would have to do something. 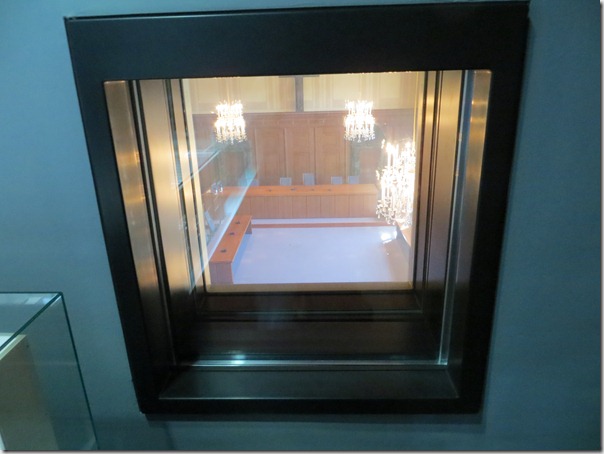 This is why we came on Sunday to see Courtroom 600.  It is an actual working courtroom and most visitors only get to look through these windows and see it.  But on the weekend, when court is not in session, you can walk into the Courtroom and sit the actual visitors seats.  We did not plan it this way, but once we realized we would be going to Nurnberg on the weekend we knew Courtroom 600 was going to be our first stopping point.
Linda wasn’t really into history when she was in high school but it is things like this brings history to life.  One can not come here and merely coast through, saying so what, it is only another museum. Courtroom 600is a place that grabs you, turns you inside out, and makes you question who you really are. There is far more to Europe than just the Eiffel Tower, unfortunately many Americans take time to find out what they are. 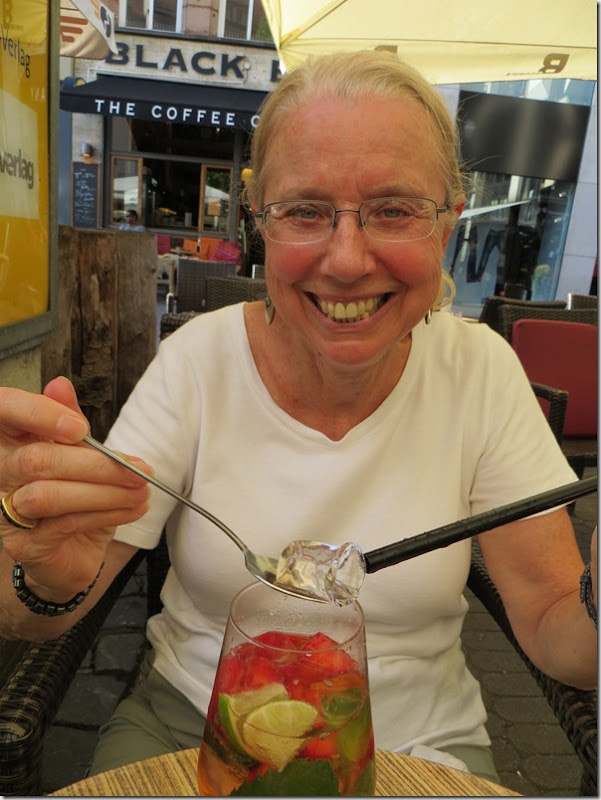 As we have done every night since we arrived in Europe, once again, dinner was at an outside café/restaurant.  Tonight we won’t dwell on the caprese salad or the bruschetta or even my beer. Tonight we highlight Linda’s strawberry spritzer, not because of the fresh strawberries, but rather because it held a first, that being real ice cubes. and not jus a ice cube, but three of them.  They were the first  ice cubes we have had during our time in Europe. Things just seem to be getting better all the time.  Who knows we may hear people speaking American English tomorrow, but of course that means we will have to rapidly head in the opposite direction,which will not be problem, because there are so many wonderful things to see and do in Nurnberg that anywhere we go there is something fascinating to see or do. Life is good!
Posted by Bob and Linda at 1:59 PM