A Different Time, but the Same Place

For today we will try something a little different, which is taking you through our day, but not going into detail on just a few things while skipping much of what we do. There will be one place we visit that we go into more detail about, but I think you may understand, especially if you appreciate history. 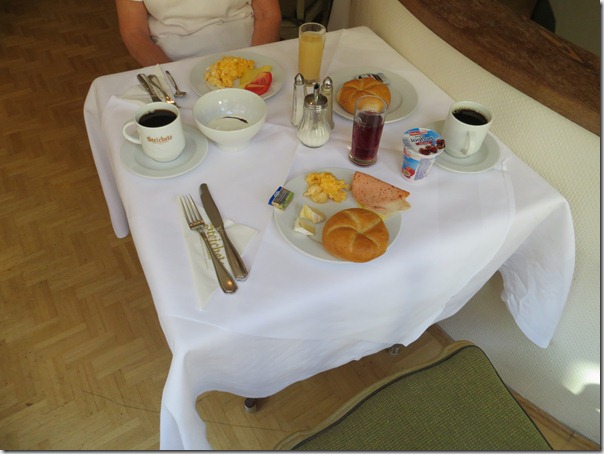 The way to start the day is with a good German breakfast. For Linda it is eggs, muesli, yogurt, sliced tomatoes, grapefruit juice, a hard roll and a tub of Nutella. If you’re going to be a Fraulein, you’re going to have to eat like a Frau. So, shovel it in like she did. As or me, grape juice, cherry yogurt, two kinds of soft cheese ( I don’t know what they were, but it didn’t matter because they tasted great), a hard cheese and two unknown but very different kinds of cold cuts, and a roll I slathered with butter and piled  the meat and sliced cheese on. We both had coffee. And a word about the coffee.  Me, Bob, is not a coffee drinker, except for when he is in Europe. Every morning I take that first drink of coffee and say the same thing, “This is the best coffee I have ever had.” And I really mean it. American coffee is made for the masses and it is utter crap. This is real coffee, great taste and absolutely no bitterness or after taste. And yes, we do see a few Starbucks, but that is also where we hear American English be spoken by those Americans who have no idea what really good coffee tastes like. 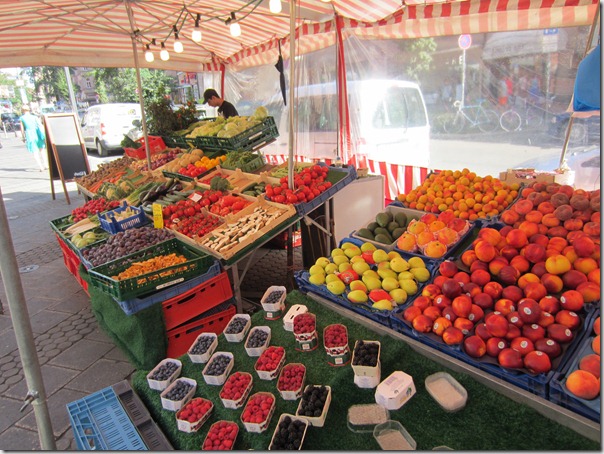 A very common sight along the streets of the old section of town. These are areas they call “Markt”, they were hundreds of years ago and are also today the fresh markets of the town.  While the picture barely shows the mushrooms, Linda made a observation about them.  They are absolutely dead fresh, sliced to perfection, and laid out so that no one piece touched another, contrast this with the cellophane wrapped, bruised, who knows how old old the mushrooms that are in the US supermarkets.  And no we did not buy anything this morning, but just wait until we talk about this evening. 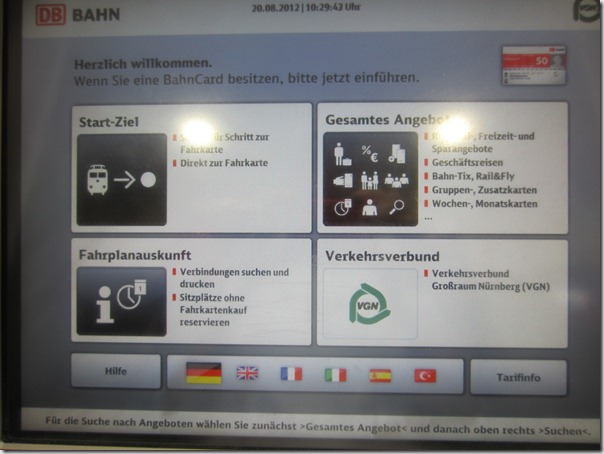 First thing after breakfast was a trip to the HBF to buy our train tickets for next town we will be going to in a few days.  We knew if we bought our tickets for this journey a few days ahead we could save a huge amount of money.  We did it all at the DB ticket machine rather than at the ticket counter, which saves us even more money.  So two tickets from Nurnberg to Sankt Goar were a total of only 68 euros which worked for us.  We could have tried to buy a combination of Lander tickets and point to point tickets that may have saved us a few euros, but it would have meant at least several hours, if not more, in more travel time. 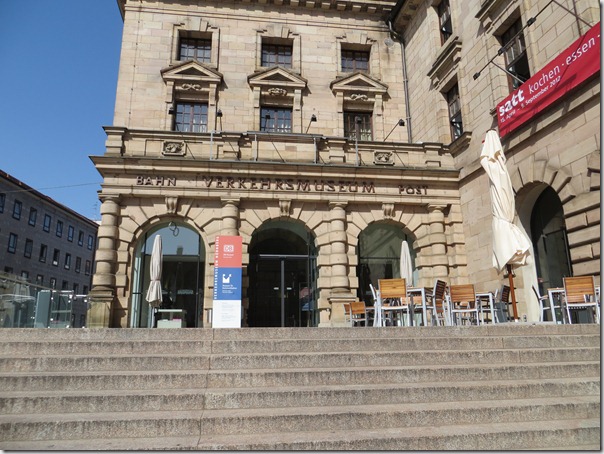 Nearby the Hbf was the train museum which turned out to be a “Bad Bob”.  He knew there was one museum in Nurnberg that was closed on Monday, but Bob could not remember which one.  Guess which one it was, guess which Fraulein was really pissed. She doesn't have a German first name and is married to Bob, in case you were wondering.  Bad Bob [editor’s comment:  Really BAD BOB] 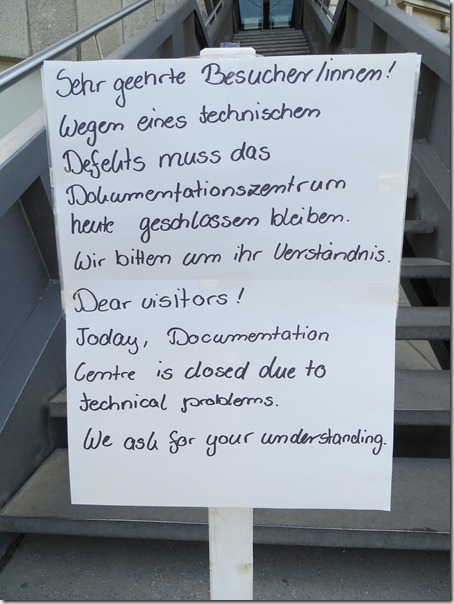 When it is a bad bob day, correction, Really Bad Bob Day,(note this is another correction to the correction,) it makes for Really Really Bad Bob Day.  This is what greeted us when we took the tram to the Doku Zentrum.  However just because it was closed does not mean we didn’t get to see the rest of the Nazi Party Rally Grounds.  It is a place that can truly only be appreciated in person. 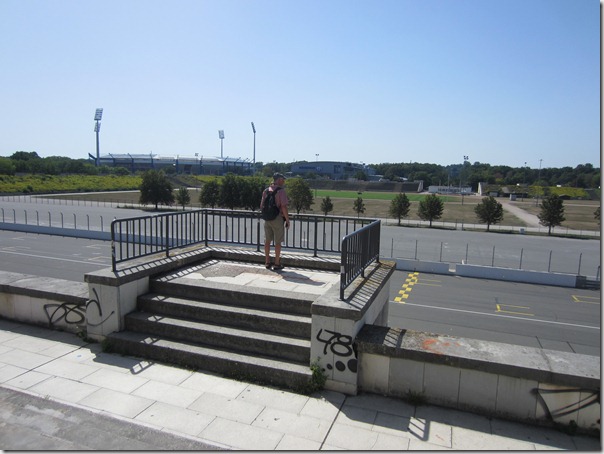 To many this may not mean much. Go back to the mid 1930’s and it is different.  Bob stands in the spot where Adolph Hitler addressed hundred’s of thousands Nazi Party members during the great 1930’s Nazi rallies.  If you don’t appreciate the history of the 2 weltkrieg you may not uderstand, but if you do, this photo will give you chills. 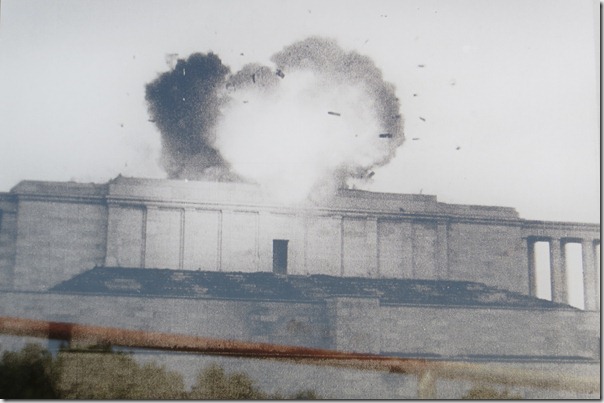 In 1945 after the end of WW II, the huge Nazi swastika that stood atop this structure was destroyed by US troops.  Today in Germany there are no memorials to the Nazis but there are relics from their times.  This is one of them, this should be a reminder to all of us that war criminals whether from another country or our own should be prosecuted and what they stood for should be obliterated from the face of the earth. Of course a s long as we are ‘victors’ our war criminals will never be prosecuted. Maybe someday we will not be the victors and then the chickens will come home to roost. 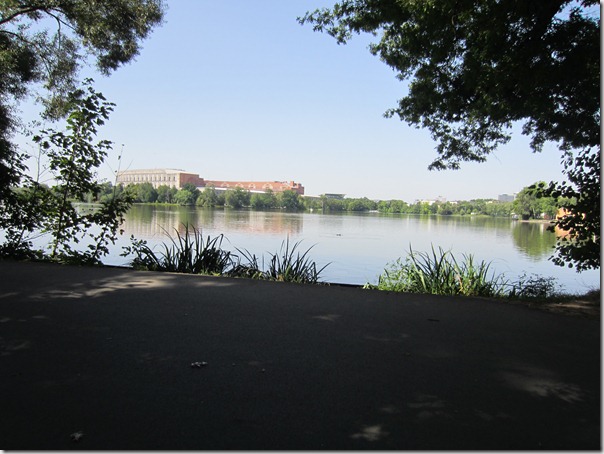 Not all was so horrible in this area of Nurnberg.  There was this absolutely beautiful lake where the Nazi faithful frolicked and had fun during the 1930’s.  It was the same place where 50 years earlier ordinary Germans did the same things, and now 70 years later both ordinary Germans and people from around the world enjoy themselves.  There are times that try women's souls and there are times that women enjoy.  Today was a day that Linda enjoyed, Bob also. 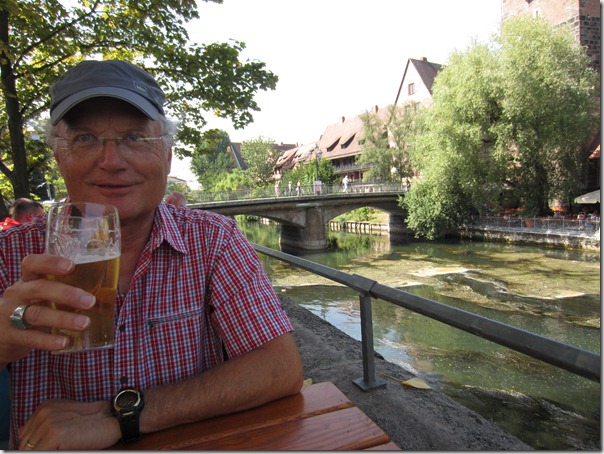 Early afternoon found us at a Hofbrau along the Pegnitz River enjoying a glass of beer each and a club sandwich. Well maybe several glasses each if truth be told. It needs be said that never in America would we get a club sandwich half the size of the one we got today, and then it would be twice the cost.  A shaded biergarten, a view of the river, a beautiful companion, what more could a boy from Ohio ask for.  After all he has a beautiful blond wife that is the envy every Fraulein that was sitting nearby, at least Linda thought so. 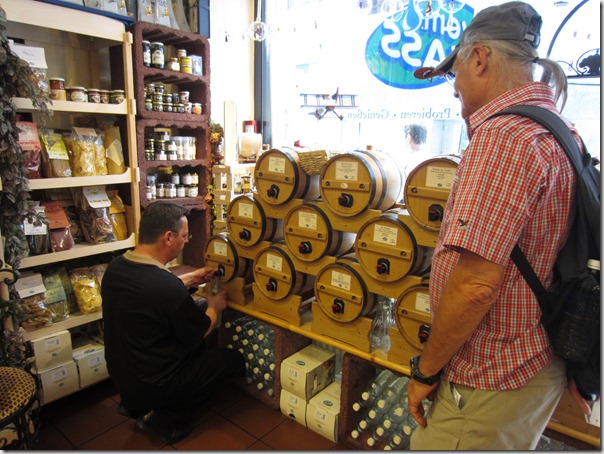 There were other sights in the old part of Nurnberg that we visited, but we will skip them and get to the good parts.  Her we are at An der Mauthalle 2, which is where “Vom Fass Nurnberg” is located.  Eduard Strober is filling a one liter glass bottle with the wine he recommended to us.  But I have gotten ahead of myself.  This is one of those wine shops we have discovered throughout Europe where you can have a container filled with wine from the “barrel”. 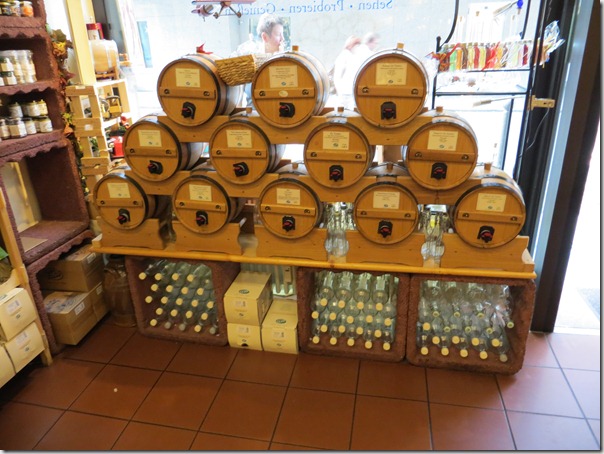 He had 12 wines available.  When we explained what we wanted he recommended his least expensive wine (this is what we love about Europe, and if we need to explain it you won’t understand).  We bought a liter of white wine, special for Linda, and including the 1 liter glass bottle it was only Euro 3,25. Which was Euro 2,75 for the liter of really great wine and Euro ,50 for the glass bottle.  Try finding that in America. 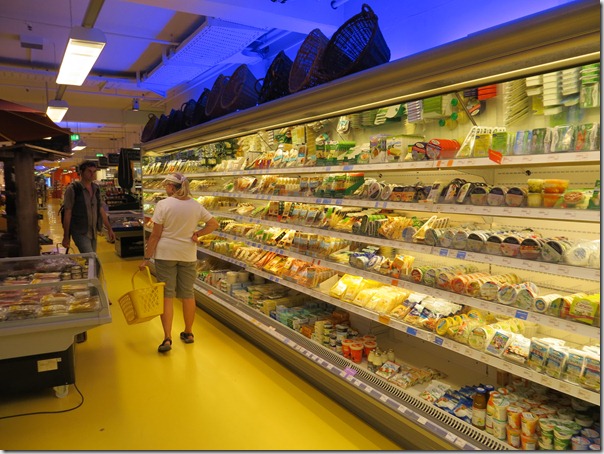 We had decided that we would do a picnic in our hotel room again tonight, being tired after an exhausting day and also needing to drink that liter of wine.  Near our hotel was a Basic Store, a grocery store that again those who have traveled in Europe will understand and those that haven’t have no idea as to what it is.  A tiny entrance, you walk back inside and the store seems to go on forever on multiple levels and directions.  To say that it is like a American supermarket does not do it any justice.  You need to come to Europe to understand.  When we left we had three kinds of cheese, one of which was our beloved Munster from France that smells like crap and tastes like the Nectar of Gods. There was also a blue cheese that also stunk yet tasted fabulous.  Our entire meal, including the Nutella dessert only cost Euro 22 and we soon enjoyed it in our hotel room. All of it, and we mean ALL of it!! 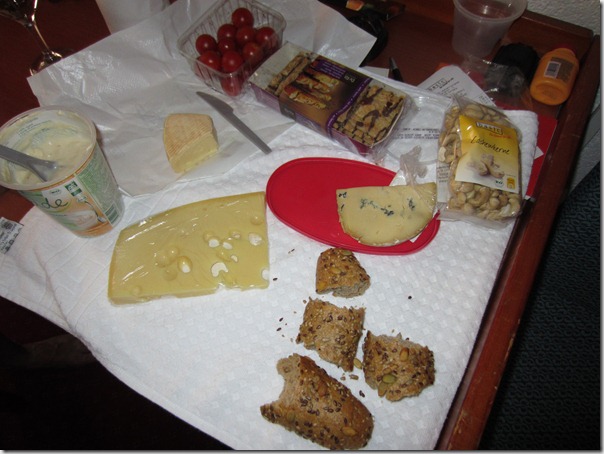 We don’t know what you may had for your evening meal tonight, but whatever it was it could not have possibly been as good as what you see above. So the end of our day. The Hotel Steichele in Nurnberg. A few items bought in nearby shops. A mid August evening in Europe. Need we say anything more? You want us to say more?
Then how about: “Life lived to its fullest.”

Until tomorrow, Auf Wiedersehen.
Posted by Bob and Linda at 2:17 PM