Today we confirmed what we more than suspected. The weather this last week has been brutally hot for this part of Germany.  While we found it to be not as miserable as Texas weather, none the less, we have been sweating like the proverbial pig, even if pigs don’t sweat. The new short sleeve shirt we bought for me in Wurzburg has been a life saver. It is funny how people get all bent out of shape tryi9ng to decide what to bring to Europe. We bring the bare minimum, and buy whatever else we need. We both find that we like the European cut of the clothes better, plus they really aren’t that expensive and the quality is definitely high. We have yet to see the typical American label stating they were made in a Bangladesh ghetto or some such place. Long time readers know I go off on tangents and say what I want to, new reader can join some of the old readers and just ignore what I write when the don’t agree. Hey, even Linda oftentimes tells me I am prattling about nothing, but it isn’t going to stop.
Speaking of Linda, she turned in her resignation this morning. No, it doesn’t mean I am free to go off and find another woman to spend the rest of my Life with. It means she is longer typing what I dictate for the blog. I will spare you gentle readers with all the sordid details as to what led to this parting of the blogging ways, but she says it is an irreparable separation. So from now one there will be no one filter what I say on these pages. That is the official version. The unofficial version: she made so many errors that it took me up to a half hour to make the blog ready to be posted after she was done. Beside I use lots of big words they didn’t teach in Appalachian Schools, you know, the kind with more than four letters in them. Just teasing, Linda, for goodness sakes dear wife, I was just teasing. 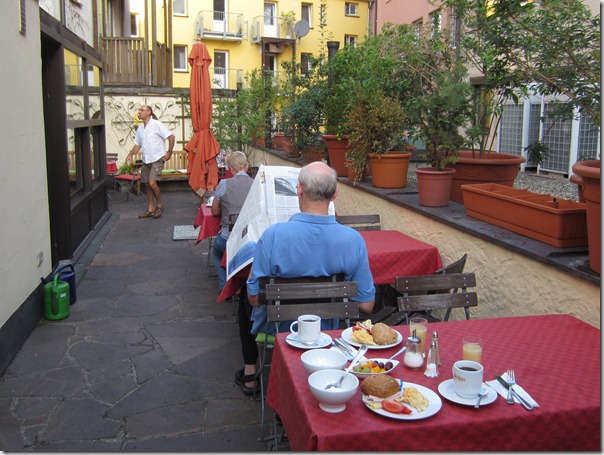 Our breakfast in the foreground, the wooden railing around the balcony off our room in the upper left corner. Our bathroom window is directly above the first table, so we really have to be careful what we do in there in the morning. While the words of many languages are different from other languages, there are certain human sounds that are the same the the world around. After all, doesn’t everyone know the famous operas, or where thinking I was referring to other sounds? Hey, Linda isn’t typing any more so I get to write what I want. 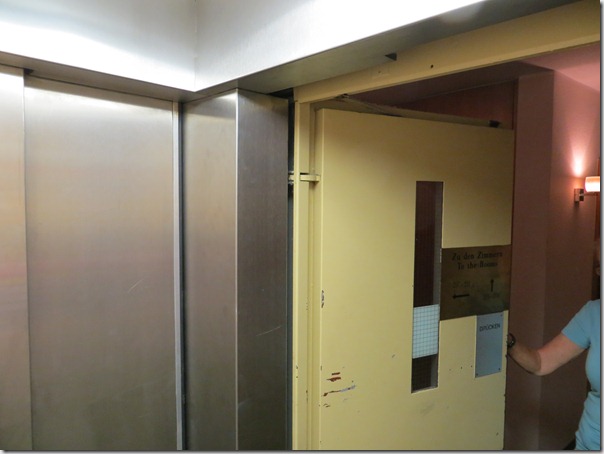 Some things just can’t be photographed with our cameras, and this is one of them. We are staying in hotel where the building dates from the 1500’s, no Best Western’s for us, but even so it does have an elevator. Linda is holding open one of the two doors of the elevator, the other being the stainless steel door to the left. The reason for the photo being the way is, is because it is only a four person elevator. Or maybe I should say, four people with luggage for only two of them, maybe, and that’s if it isn’t very much. And I’ve written all this and we haven’t even left the hotel yet to start out day. I think I need to get Linda back. 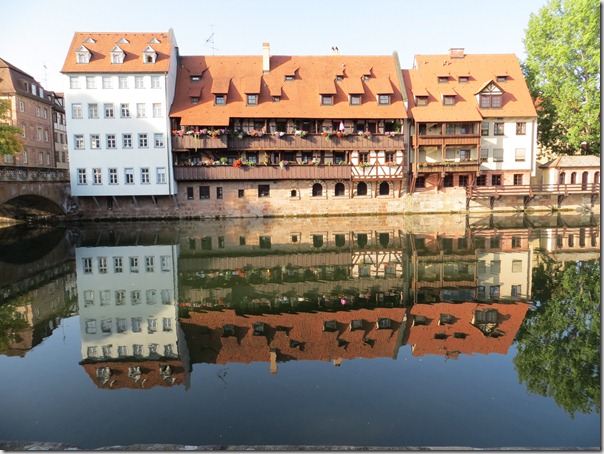 They do post cards, magazine articles and books with pictures like this. Early this morning we stood on the bank of the Pegnitz River, looked out, and this is what we saw. Some things do have to be experienced to be fully appreciated, but sometimes a picture can awfully close to the real thing. 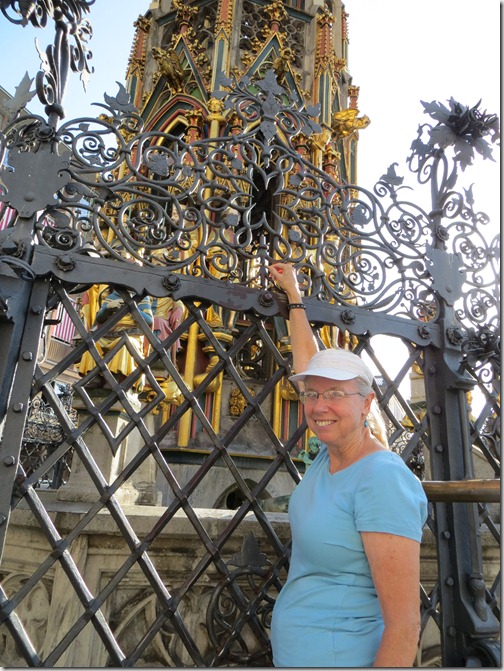 Linda spinning the lucky ring at the fountain in the Haupt Markt. They say if you spin it three times you will soon become pregnant. I was all for seeing it that was true. But I was informed by Linda, no how, no way, no trying. So why Did she spin it in the first place if she wasn’t even going to try to determine if the legend was true? Puzzled Bob. Obviously I will never understand women, or at least the one I married. 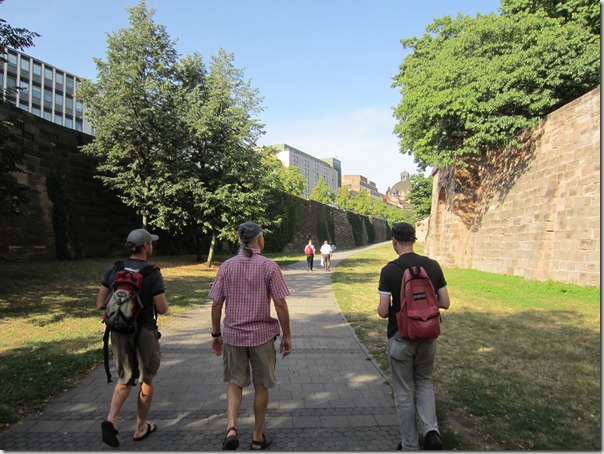 This morning we went on a walking tour of the city. It turned out to be a wonderful experience and we learned so much about the history of the city that my history buff brain is filled to overflowing. I will spare you the details, but in the photo we are walking in the old dry moat of the city. Nurnberg is a proud city and has only been conquered once in its 1000 year plus history. In 1945 it took battle hardened US troops 5 days to capture the city from a bunch of under 16 and over 65 year old new German recruits. I t is a proud city with a proud heritage, and rightly so. By wars end what we see today of Nuremberg was little more than piles of rubble. Building after has a sign on it saying it was built in the 1300, 1400, or 1500’s and was destroyed in 1945, then rebuilt in the 1960'’s or 70’s. Politicians fight wars for their personal glory, the rest of humanity pays the price. If politicians had to personally lead the soldiers into battle how many modern wars would never have been fought. And no, I am not a Pacifist, but maybe I am and idealist, expecting our leaders to actually be leaders, something we haven’t seen for decades. 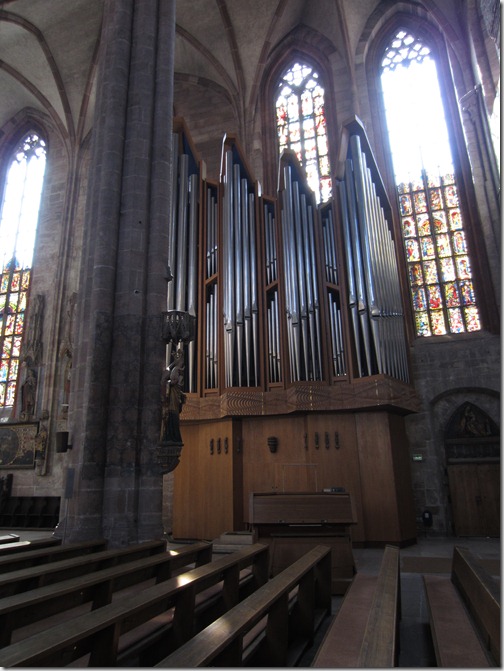 Another magnificent pipe organ in a grand church. I know and organist that would live to play this organ. But even though the church dates from the 1300’s the organ is just years old. 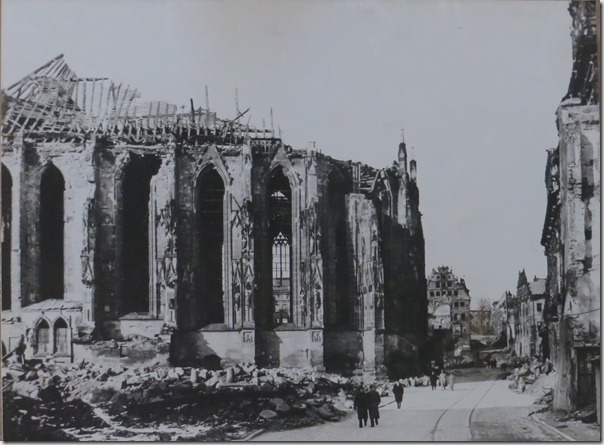 What this church looked like in 1945, and for the next 25 years. In the United states we may have been touched with a little bit of terrorism, but we have utterly no concept of what modern war does when it is fought in ones own country. 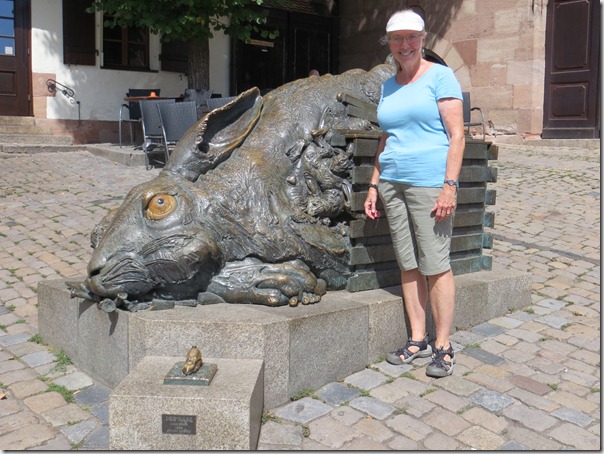 Today was filled museums and sights that we never knew existed. Take this rabbit for example. Albrecht Dürer, was one of the, if not THE greatest German printmaker. The famous praying hands woodcut print that every American student has seen in a history book during their years in school, that was from the hand of Dürer. Today we visited the house where he lived and worked. No appreciation of history, you wouldn't,t understand. Linda was almost giddy with excitement at standing in the very room where he made his greatest wood prints. In the US we can see a tavern where George Washington may or may not have slept. In Germany we can see the house where Albrecht Dürer worked. Sorry, but to us there is just no comparison.
I will leave you with the story of our lunch, leaving out 75% of our day. We found an outside table at a café that seated six, and were eating when we noticed three people looking for a place to sit. Over here you share your table, or at least the Europeans  and Linda and I do, so by pointing we invited them to sit down.

What followed was the most wonderful meal and conversation between they who spoke some English and we who spoke less German. It is the greatest lesson we have learned during our travels in Europe over the years. don’t be afraid to strike up a conversation even if you don’t speak the language, because no matter how little you speak it is enough to carry on a conversation.
Just like the only people who will never be full time RV’ers are the ones who don’t think they can, the same is true with traveling to other countries. if you don’t think you can, you can’t. But those that do travel, whether by full timing or to other countries, live a Life those who don’t can’t even imagine.
Posted by Bob and Linda at 2:02 PM