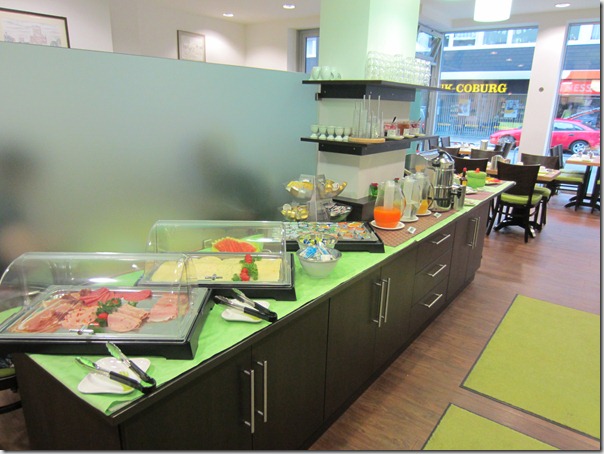 A portion of the breakfast spread at our hotel. This one is definitely different from the the first few we stayed in, in that its décor is what might be called ultramodern. Interesting juxtaposition,  seeing that Trier was originally a Roman Capital City in the late 300’s. Guess many of those Roman buildings were ultramodern for their time, so what goes around comes around. 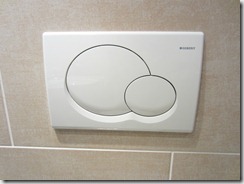 Big flush, big button. Little flush, little button. A great way to save water. I suspect it would never catch on the US for reasons similar to why the masses rejected the much better metric system of measurement. It would be just too hard for Americans to learn which button to push. 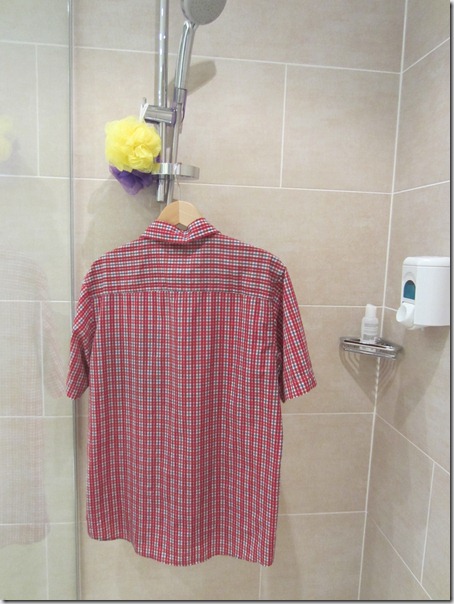 If you’ve been to Europe you might have already guessed what I will be talking about. Otherwise, the netball is one of two that we use for a washcloth since there is no such thing in any of the hotels we stay at. Maybe the big American chain hotels in Europe have them, but we have to do without or do with something else. The shirt is hanging up to dry. We pack as if we were staying for three days, but stay for three months. Just like the Europeans, we wash our clothes in the sink and hang them up to dry overnight. Works for us. 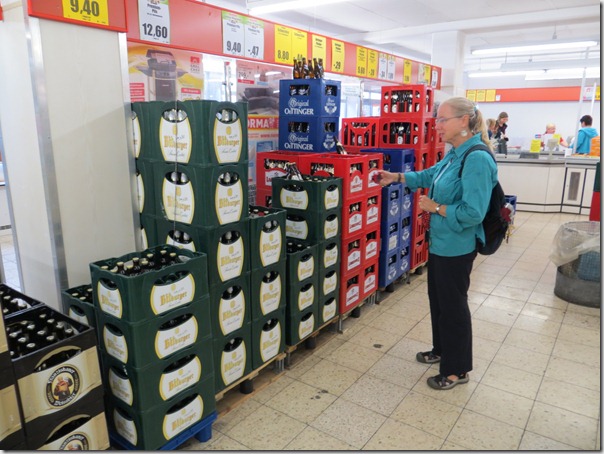 In the US cases of bottled water often line the front of the store. Over here it is beer. Linda’s niece Joellen is always talking about Bitburger when we visit them, so Linda just had to take a photo of this display to send to her. 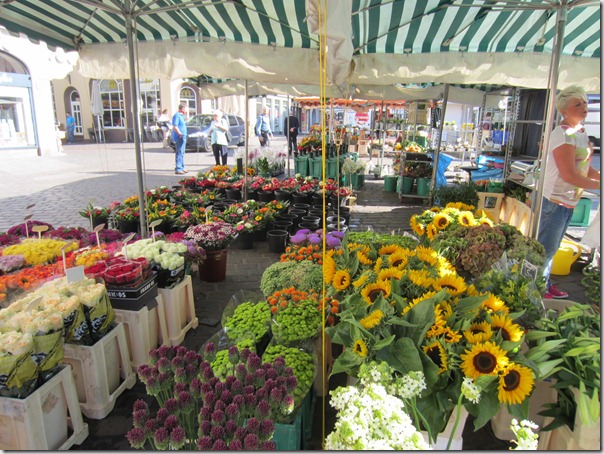 Among the things we did today was to do some shopping. Maybe it was a lot of shopping, but it was just something Linda wanted to do, and besides there are only so many Roman ruins you can visit in one day. Which is why we will be back here some day. The absolute perfection in these flowers are amazing. Linda says if we would put a dollar in a kitty for every time we say WOW while we are over here, we would fund our next three months in Europe by the time we were done with these three months. Keeping track during supper tonight, we stopped counting at nine WOW’s. See what I mean. 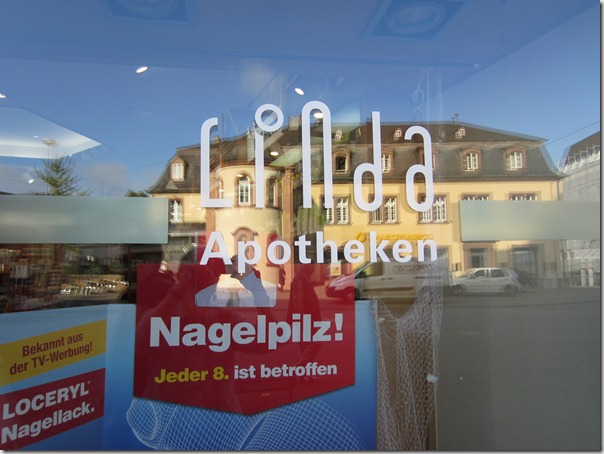 For some reason Linda really liked the name of this pharmacy. That’s the building across the street reflected in the window. 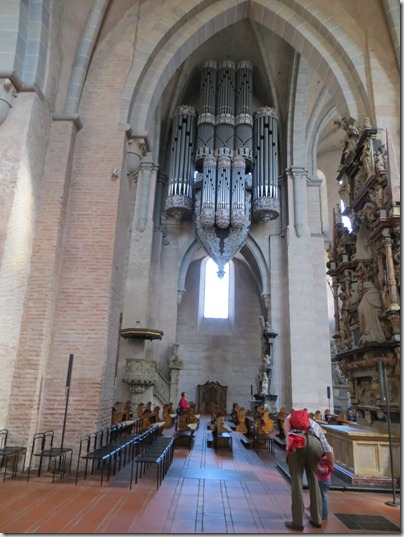 There are pipe organs, and then there are pipe organs. This in the church they call The Dom. This one is so huge that our photos couldn’t do it justice. This view is looking from one side of the church to the other side, and where I am standing to take this photo and where those pipes are hanging is a good ways in from the outer walls of the church. The small figure in red in the distance is actually standing under the pipes. This church is so massive we couldn’t even begin to imagine what it would sound like. Just another reason to return to Trier. 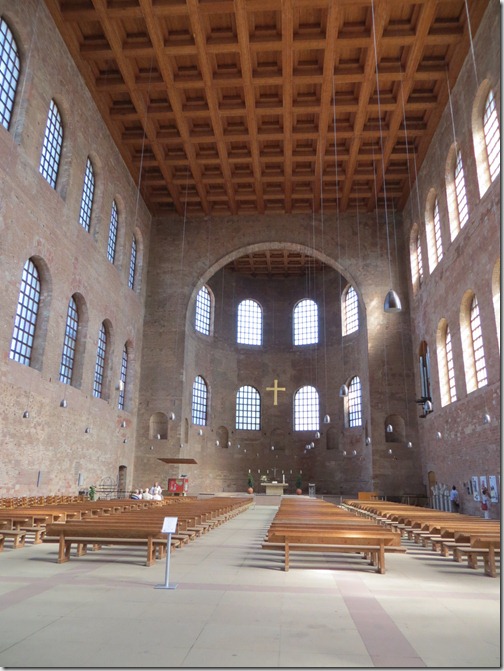 This is another church, but before it was a church it was the throne room of the Roman Emperor Constantine. It is the largest single surviving Roman building outside of Rome. Just one hint of its immensity, those wooden squares in the ceiling are 10’ by 10’. And no, they don’t date from Roman times, but the walls sure do. 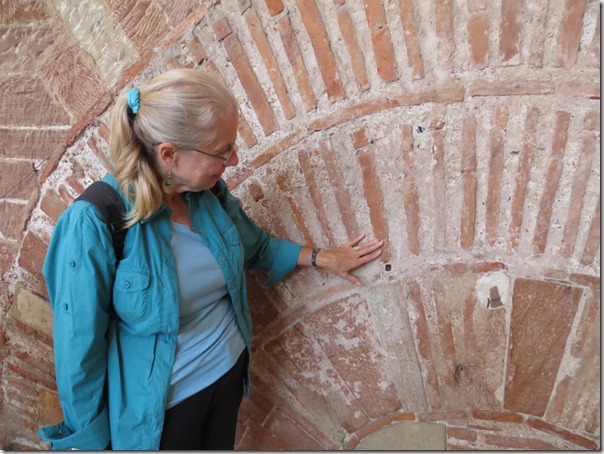 One of the original Roman arches. Roman bricks were different than ours, plus each one had a mark on it to identify the firm that made them and to aid in quality control. It’s things like this that make me angry when I think of where we humans might be today if the 1000 years of Catholic Church dominance had not returned us to superstitious, near cave man existence until the Renaissance started to bring science and knowledge back once again. And to be fair, even today there are still certain fundamentalist religious zealots that would take us back to those days again. 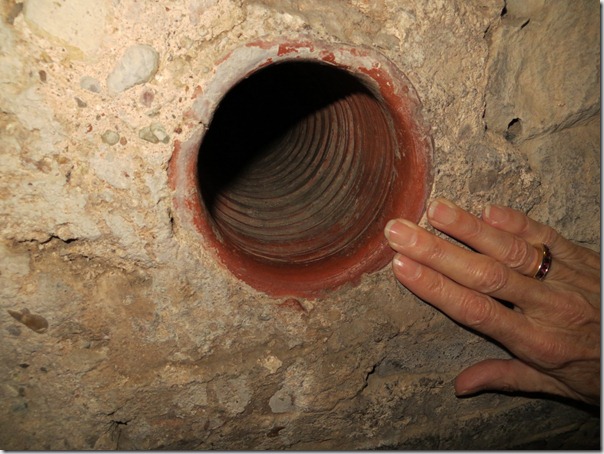 Later we visited one of the several Roman baths that were in Trier. A Roman corrugated clay pipe. We were down in the underground chambers where the slaves toiled when we discovered a section of wall that had these coming out of it. It is also why it takes us much longer than the guide books indicate to visit anything. We don’t just go to say we saw it, We go to understand what it was we saw. And there is a very big difference between those two approaches. I call this the Happy Bob photo. On one of the many side trips into stores during our day, Linda found the Nivea men’s deodorant that I love. Can’t buy it in the States, though we did find it in Canada when we went to Alaska in 2010. I guess it doesn’t take much to make me happy. 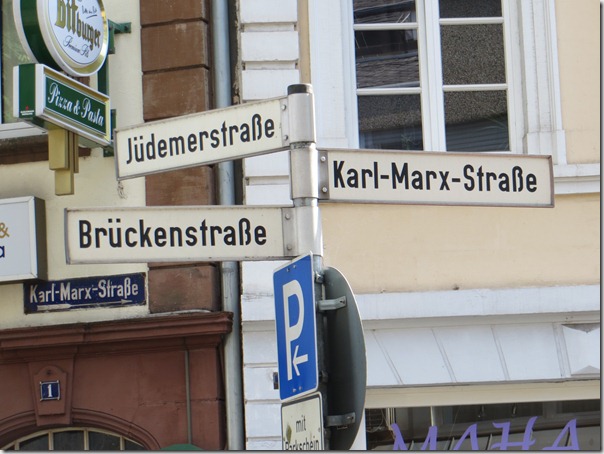 Karl Marx Street, which is not the street the house Karl Marx was born in, is on, but the house is just a short distance away. Besides, if I posted a photo of the house I’d just have to explain what is was. There is a museum in the house that was great. It told the story of the man and what his life was like. It never got into any of the “communist” ideology, except in a very indirect way. They have the English audiophones so that is not a problem. 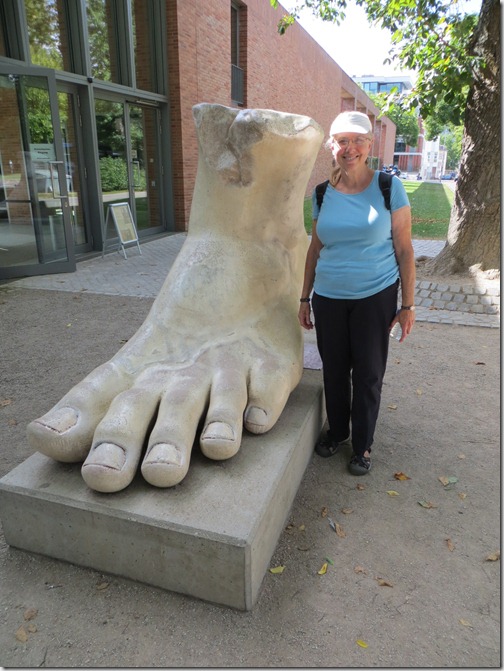 I guess I can never make fun of Linda’s feet again. This a replica of the foot of Emperor Constantine. Looks to me like the empero got regular pedicures back in Roman times. Something tells me that if I asked Linda to do that for me I’d be missing a few toes before she was done. Tomorrow we are off to Paris and the start of our Rick Steves Tour. The funny thing is that neither of us are really excited about. We’d rather spend another month or so in Germany doing what we have been doing for the past two weeks. Maybe that really means we do need a vacation from our vacation, plus we will get to see the beaches of Normandy, making it more than worthwhile.
Posted by Bob and Linda at 11:00 PM