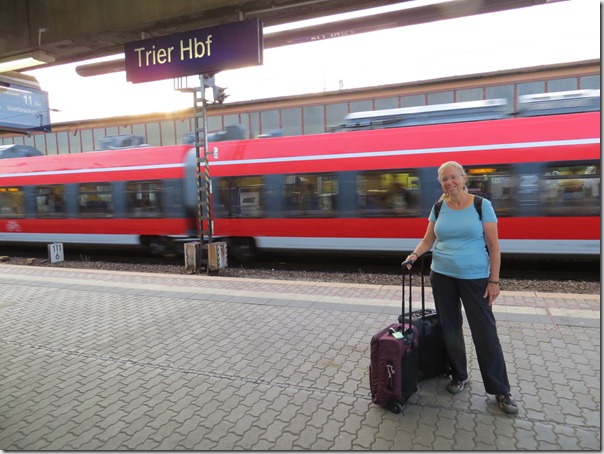 7:20 this morning found us walking to the Trier Hbf. It was time to leave Germany and head west with a final destination of Paris. As we walked we talked about the great time we have has so far, and especially the wonderful German wines that Linda has come to really appreciate. She has certain standards in what wines she classifies as acceptable, the first being it can be any color as long as that color is white or yellow. I looked at some of her yellow wines and described them in the most unflattering terms, but she still enjoys them. I just hope France is ready for critics of their wines. It will be interesting when she is faced with Chardonnay or Chablis instead of Sylvaner and Riesling. 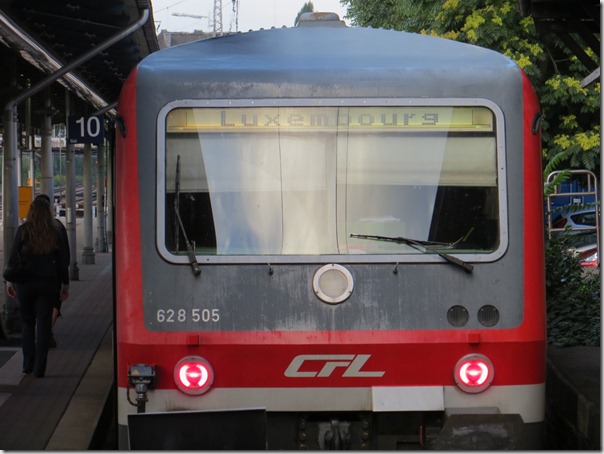 It is hard to guess where our first stop was going to be. What we did was buy tickets on the TVG high speed train to that left Luxembourg City at noon. So now we were on our way there and planned to spend a few hours this morning sightseeing, which we didn’t get to do on Sunday, and if we like it, then we could include some time there on a future trip. 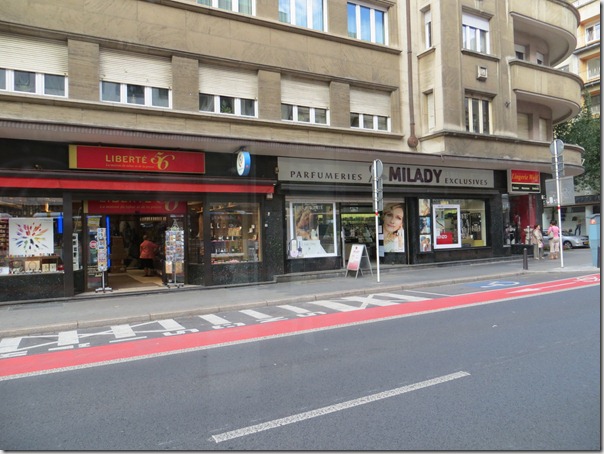 The first part of Luxembourg we saw on our way to the old town area. The only difference between here and Germany is that speak French and do business like the French, which means the stores were not yet open. Of course it was so early they hadn’t been open in Germany when we left either. 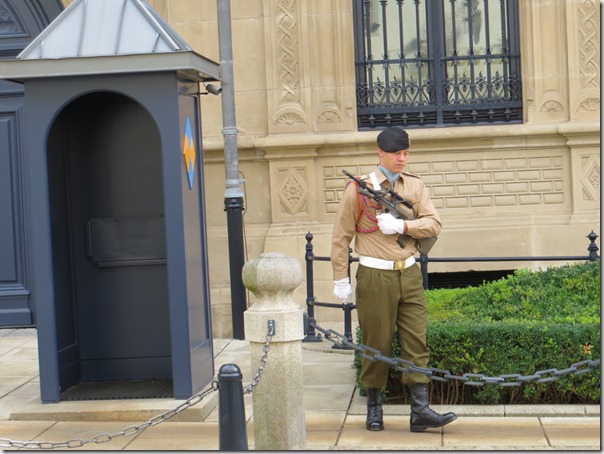 The guard in front of the Palace looks a little different from what we saw at Buckingham Palace in London. And instead of holding a stock still pose, he marched back and forth in front of the Palace. Another difference was that there were only about half a dozen tourists here, four of which were Chinese video taping everything and Linda and I were the other two. I’ll just call it bragging rights, after all how many Americans have seen the Palace of the Grand Duchy of Luxembourg? 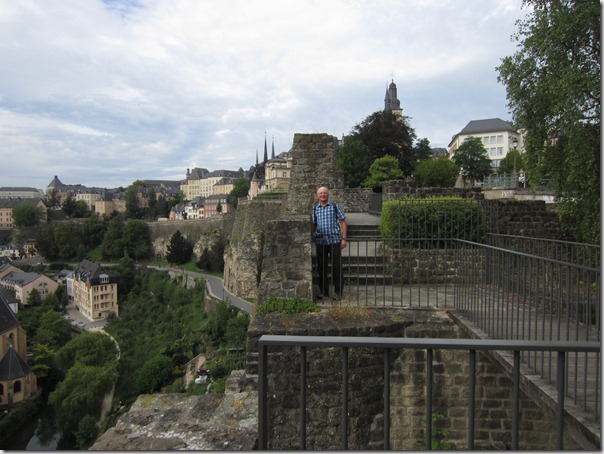 Actually, Luxembourg turned out to be a really neat place, and yes it is on our return to list. It is built on hills and has some very interesting fortifications that you can walk around on. This gives a little idea of steepness of the hills and what the fortifications looked like. There are trails that follow them, and you can also go inside them. They are called casemates, and Linda wants to check them out next time as there was just no way we had enough time to do it today. 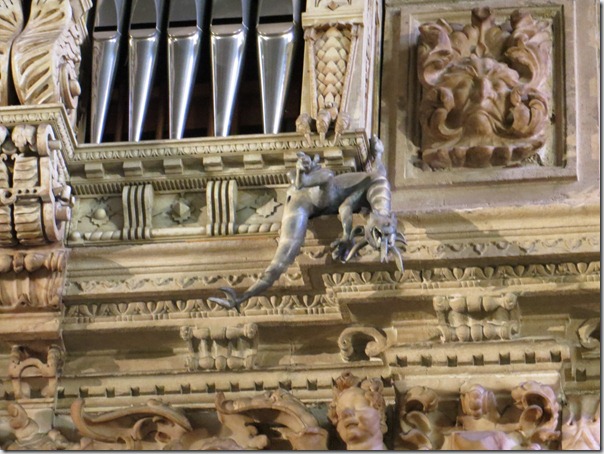 We also visited a very massive church, and instead of my usual pipe organ photo, here is what was hanging on to the bottom of the pipes. We’ve seen several carved church mice, always in wood, during our travels, but this is really different. I think it is a scorpion, but whether that what it actually is, and what it is supposed to signify is beyond my knowledge and limited time to search for what it might mean. 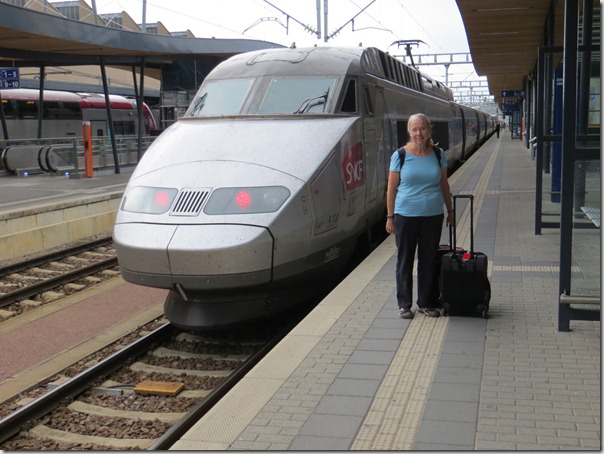 The family Bullet Train Babe next to the Bullet Train. Personally I think both of them are awfully sexy, even if I might be stretching the point a little with the train. 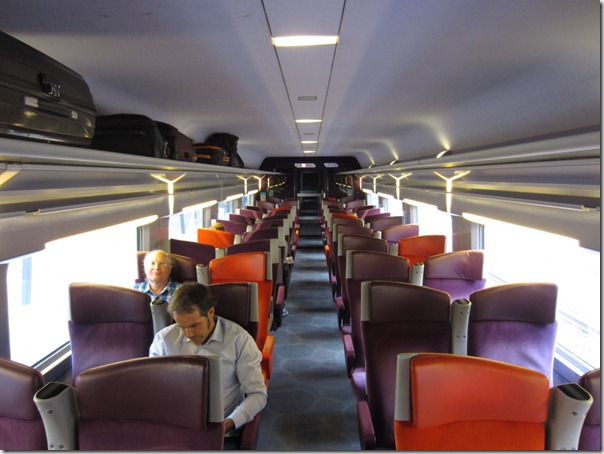 Interior of a bullet train. They go so fast most passengers get smashed so far into their seats that they seem to disappear View to the outside of a bullet train. The world around the view is the same. The only difference is when we are on parallel side by side tracks and we pass a ICE train headed in the other direction, it is literally a blink of the eye before it is past. 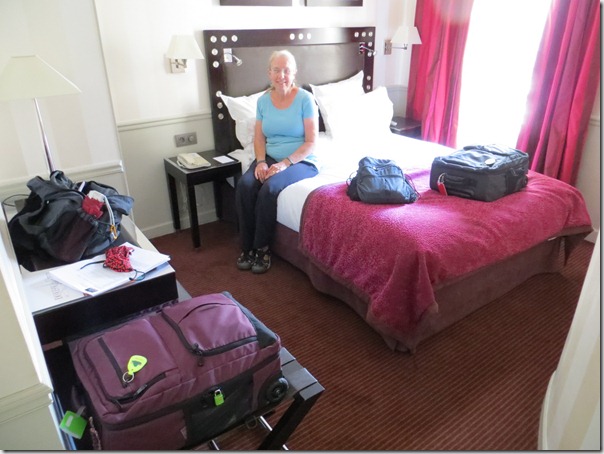 Paris. Our tiny hotel room. German hotel rooms are adequate to large. French hotel rooms are tiny to minuscule. This photo actually makes it look much bigger than it is. By the way, this is no knock on Rick Steves Tours and the hotels they select. Every real French hotel room is small. Stay in a Sheraton and it is like in America.  Stay in one of these, and it is quite a difference. On the far side of the bed there is barely room to walk between the bed and window. 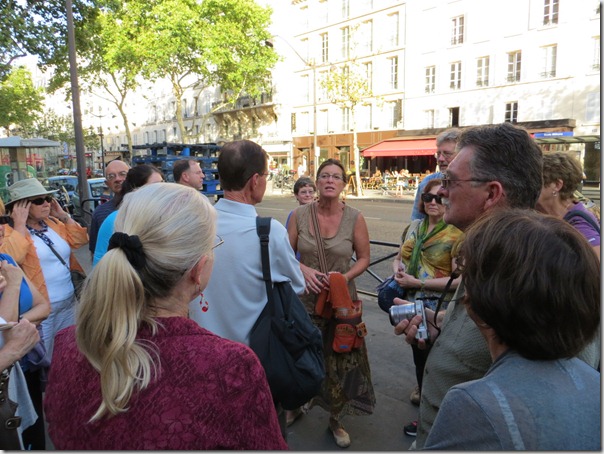 Then our Rick Steves Tour began. On the sidewalks of Paris listening to our guide, Julie give us the low down on what there was to do and see. 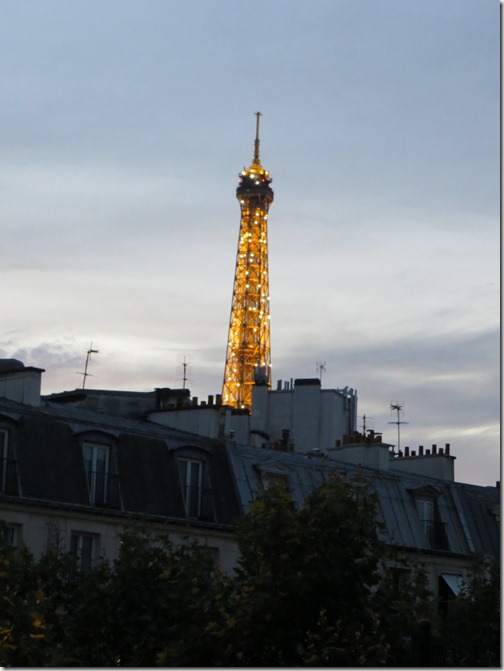 Leaving most everything lout that happened, let us skip to 9:00 when the Eiffel Tower has its first burst of glory. We are here. We saw it it. Nothing more be said. Until tomorrow, au revoir.
Posted by Bob and Linda at 11:50 PM