Festung Marienberg was our objective today, the castle on the hill above town that we have seen in the distance many times. 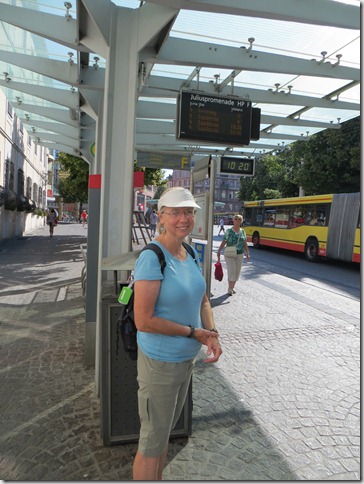 She who is in charge of such things decreed that at least one of us would not be walking up that very long and steep hill to the castle. At least I have finally gotten her to realize that castle goes with top of steep hill like peanut butter does with jelly. Lucky for her, just around the corner from where we are staying was one of the main bus and tram stops in the city. Actually I shouldn’t say “lucky” because we pick the specific hotels we stay at because of things like this. I guess small and convenient means different things to different people. 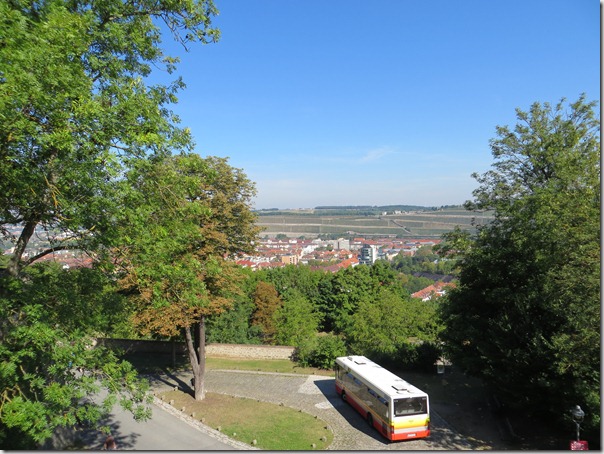 Sorry, but there is no photo of the castle, it is simply far too big. So a photo looking back down the hill and across the river to the town will have to do. We are on one side of the river valley, across the way on the slopes of the other side is nothing but grape vines as far as you can see. From all the Sylvaner we have seen being consumed around Wurzburg by the hordes of German tourists, those aren’t nearly enough vines. Speaking of tourists, we have hardly ever heard English spoken as we walk along the streets during our time in Wurzburg. On our “English speaking” tour of the Residence the other day, out of the 50 people who were on the tour, we were the only ones from the US. This is really our kind of place. 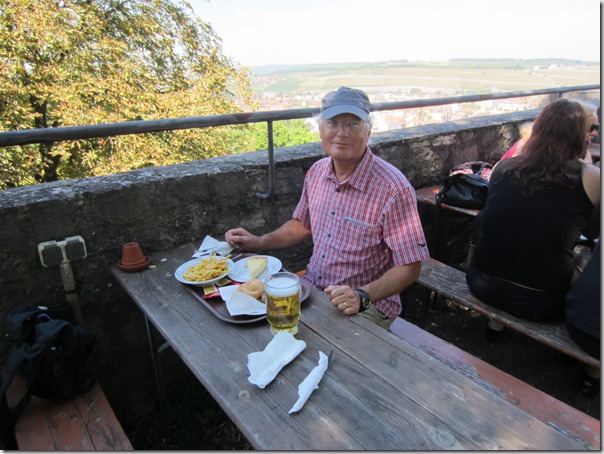 If you think wander around a castle, and also visiting several large museums inside the castle is easy you haven’t been out visiting castles lately. All that work builds up the appetite, but there is nothing like a brat on brotchen, pommes frites, and Käsekuchen  all washed down with some Pils. This was not what you think, as we shared what you see right down the middle and we were both full when the plates were clean. 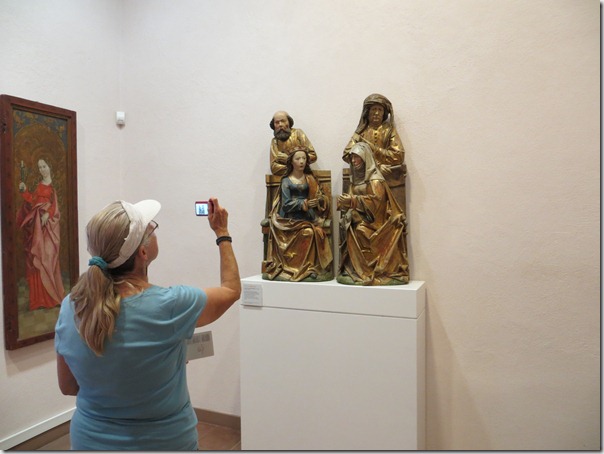 In one of the museums was one of the largest collections on Tilman Riemenschneider wood carvings in the world. We discovered his work on our first trip to Europe, and one of the reasons we came to Wurzburg was because of this. He lived here for over 40 years, and his carvings adorned many of the prominent buildings in town. Luckily many were removed and placed in secure locations before the British bombing on March 16th destroyed the town and slaughtered 1,000’s of women and children. Interesting but sad, how such acts were declared War Crimes after the Nuremburg War Crimes Trials were over and only for such acts in the future. I guess War Crimes are only committed by those who lose wars. I know I keep going on about this, but it really bothers me that we humans look at things through what the Politian's want us to hear and believe, not what is right for humanity. 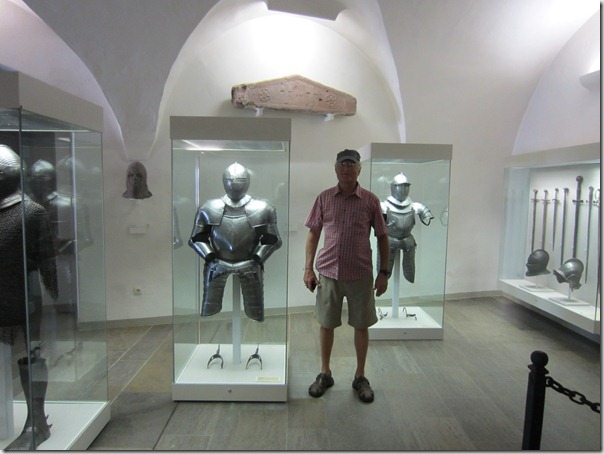 Just in case you don’t think we were really in a castle. 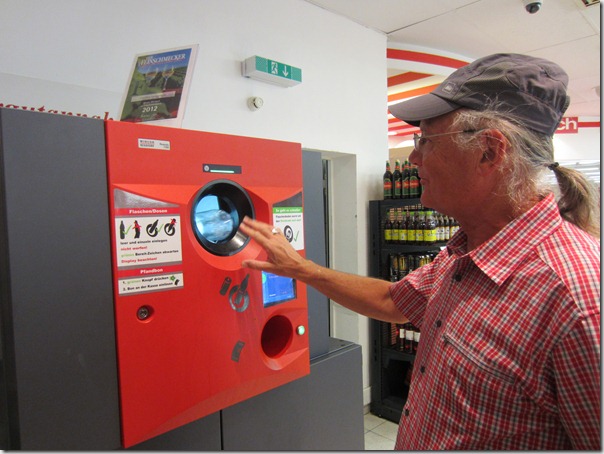 Doing our bit for the environment. We buy our drinking water in 1.5 liter bottles, the water cost Euro .29, the deposit on the plastic bottle, .25. We see everyone recycling, and we gladly join them. And yes, there was not as word of English anywhere on the thing, but it really wasn’t hard to figure out what to do. The 1.00 Euro we got back was quickly spent in the same store so it was a win for everybody. 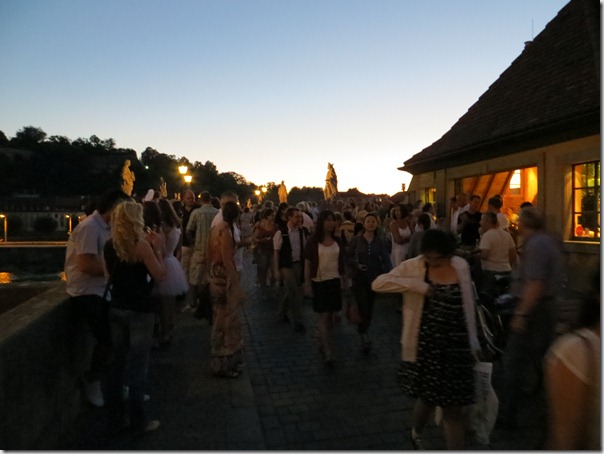 For dinner tonight we enjoyed a picnic overlooking the central courtyard of our hotel. It is a small wooden platform perched five floors up that is one of those you wouldn’t understand unless you saw it things. later we walked down the Die Alte Mainbrucke, which is the main tourist part of town and joined the hordes of people on the bridge, most of whom were enjoying a glass of wine or two, or looked to be heading home after several glasses of wine. 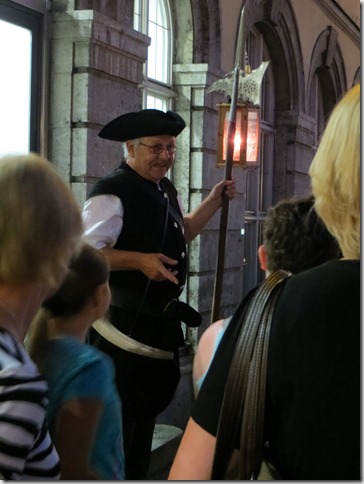 Night Watchmen walks seem to be a staple across Germany, and Wurzburg had them in abundance. We saw at least three different groups enjoying a tour. All were in German, so we passed, but it brought back fond memories of our night in Rothenberg several years ago. Tomorrow we leave Wurzburg behind and head east, but as Linda says, someday we will be back to this wonder little Bavarian city.
As many of you know or will learn, we do use Rick Steves books and forums for some of our planning, just as we will be taking two Rick Steves Tours during the next three months. The thing is we are not lead blindly around by what we writes in his books. For Wurzburg he writes that it is worth several  hours and a half day at the most. we have been here three and haven’t begun to see and do all there is to do. We spent a whole day at the Festung Marienberg today and were rushed to see all we did. We travel as full timers in the US slowly, so why would we want to travel any differently in Europe. For us it was just another day of living Life with a capital “L”.
Posted by Bob and Linda at 4:35 PM