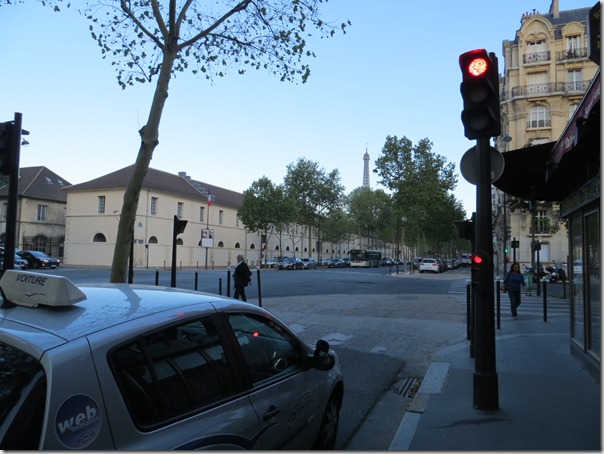 Early morning in Paris. A time when the streets are quiet, with few people and cars about. And in the trees near the center of the picture is that reminder that we are indeed in Paris. 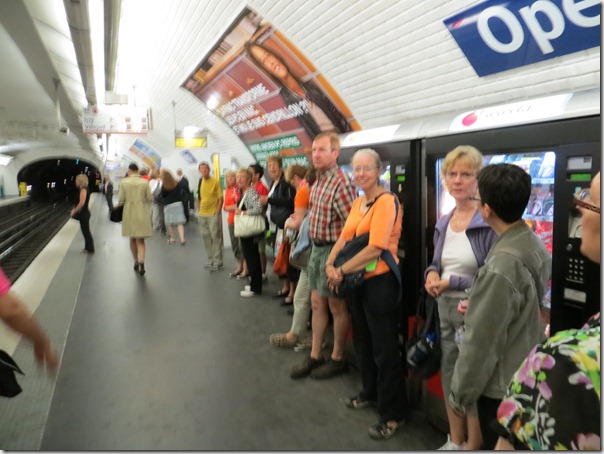 Linda was happy with her breakfast, which wasn’t what we get in the smaller French hotels we prefer. Here they had eggs, cold cuts and fresh fruits and vegetables. What we really like, and what I ate was a chocolate croissant. Who needs a big typical American breakfast, or an even bigger German breakfast for that matter when you can have a chocolate croissant. Our first first Metro station stop as a tour group is pictured. American lawyer on vacation in Paris pictured beside Linda. 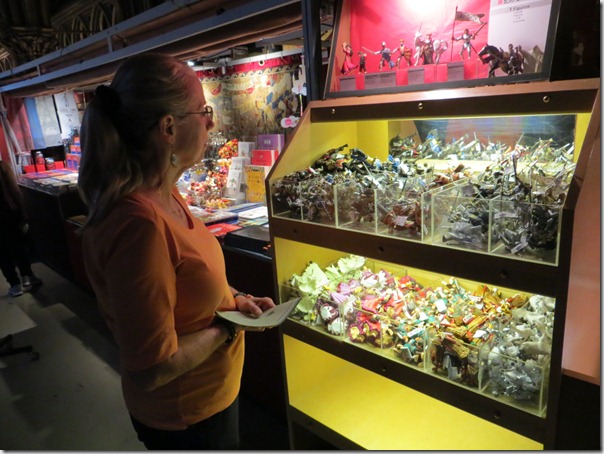 Our first stop of the day was at the magnificent Sainte Chapelle, a stained glass wonder that was built to hold the crown of thorns from Christ's head that King Louis IX of France brought back from the Holy Land. While everyone marveled at the unmatched beauty of the those stained glass windows, a certain grandma was looking at the knights in the museum gift shop. Unfortunately she wasn’t able to find just the perfect one for a certain grandson. Fortunately there are going to be other opportunities galore to find something before this trip is done, so I have to believe there is a knight in shining armor is in Linda’s future. Besides me, that is. (Referring to a knight in shining armor.) 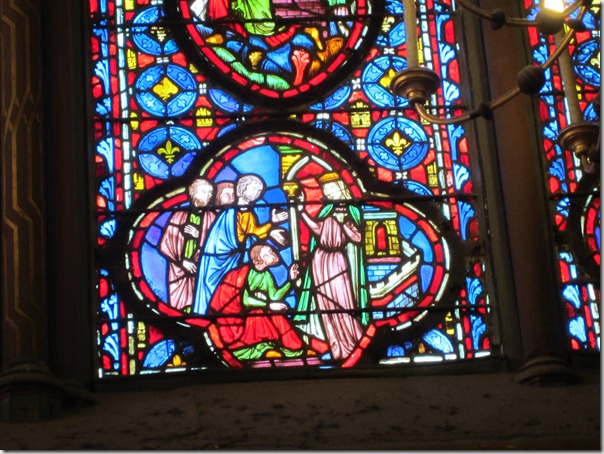 There is simply no way to do justice to these stained glass windows. 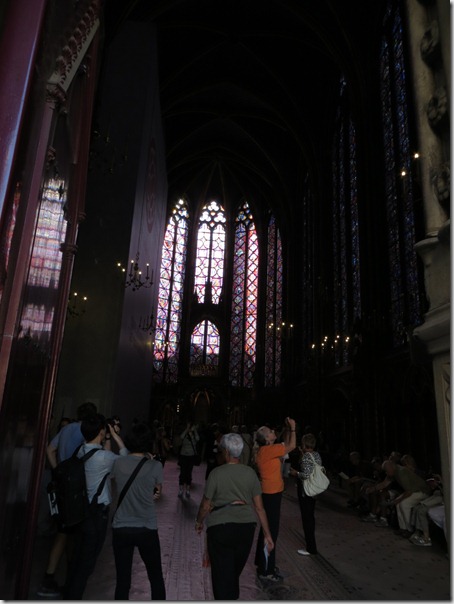 Like I said, there is no way that our photos could do justice to something this overwhelming. That didn’t mean Linda didn’t try to get that perfect picture. And not only her but the hordes of people that were in there with us were also trying for that perfect photo. We were told it wasn’t very crowded, in which case I don’t think I’d ever want to be there in the middle of the summer when it is really crowded. 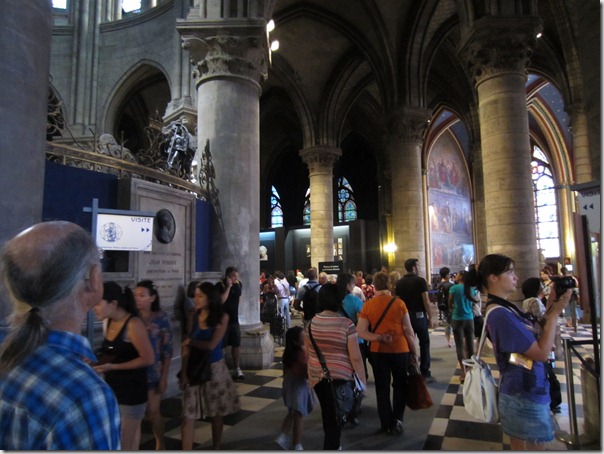 Next came one of the supposed highlights of any trip to Paris, but we suspect people just say that because they don’t want to come across as not being as wowed as they should have been by the very big, but very boring Notre Dame Cathedral. Sure it is big, it has to be to hold that unreal masses of people who come to look at it. Sure it has huge stained glass windows,  but they are so far away you can barely see them. I also have to think that a person could spend a small fortune paying Euro 2 to light a candle in all the alcoves that line its sides. I guess it isn’t cheap to keep something this big open, and if the holy fathers can fleece a few visitors with some candles, more power to them. After all, they have to find some way to pay for all those multi million dollar settlements for what the holy fathers did, and are still doing (they just haven’t been caught yet) to those little boys. 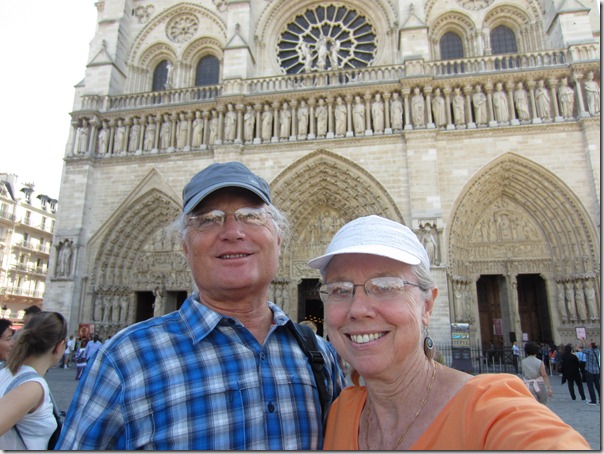 Linda likes to take these arms length self portraits, and I know if I don’t post this one, I’ll hear about it later. That’s the entrance to Notre Dame in the background. To give it credit, we called it ABC instead of abc. Translation: Another Blasted Church. You can figure out what the lower case abc stood for. In case you didn’t get it: another blasted church. 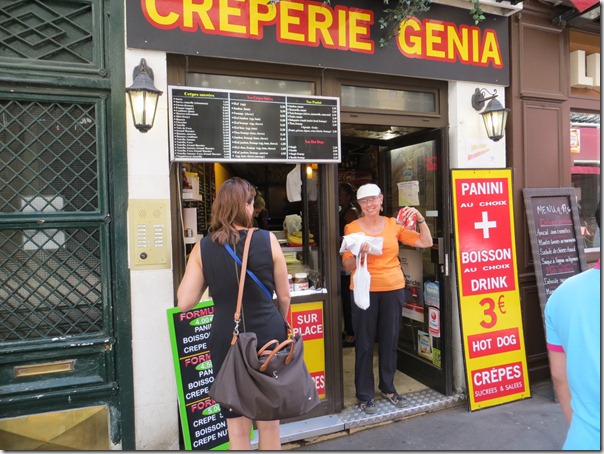 Our lunch. Sometimes Linda really surprises me. Neither one of of us wanted a sit  down meal, we were looking for something lighter. I had spotted this tiny hole in the wall crêpe shop that also sold hot Panini and suggested that we get something to go and then eat it at the Luxembourg Gardens (think of quite possibly the most awesome city park in the world and that is the Luxemburg Gardens). By the time we were done ordering we ended up with a mozzarella and tomato for Linda, a ham and goat cheese for me, a Nutella banana crepe for both of us that Linda ate most of herself, and two cold beers. We were standing there ordering and Linda decides she wants a cold beer. In Germany, a beer country, she always orders wine. Now that we are a wine country she orders beer. 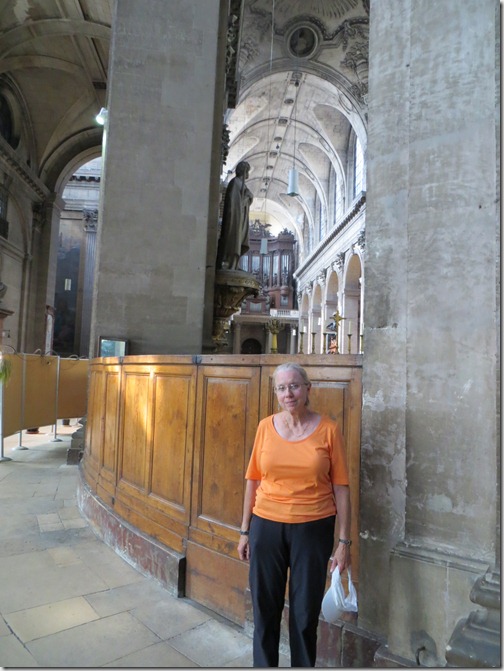 After lunch we stopped in at St. Sulpice Church, which plays a role in the book Linda is reading, The Divinci Code. It was fun pretending we were hunting for the clue, and even though I knocked on a number of stones on the floor of the church, not one of them rang hollow. Of course the fact Linda couldn’t remember exactly what the book said about where the clue was hidden, didn’t help, but it was still fun. It turned out that an obelisk I was fascinated by was the key to where the clue was, but I hadn’t searched for a hollow floor stone in that area. 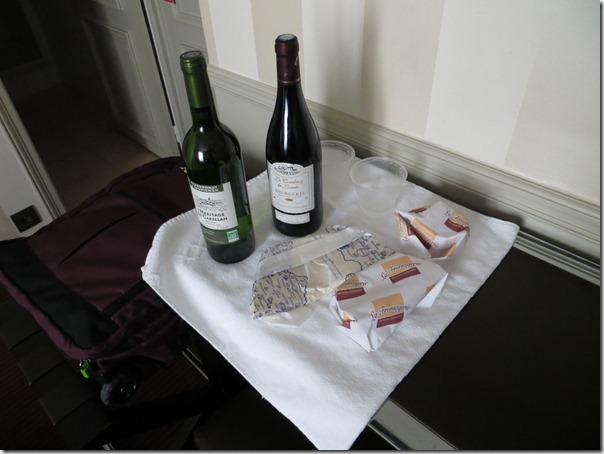 We decided that we were so tired after the long day of museums (I’ve left out most of what we did during the day), that instead of eating out, we would have a little wine and cheese in our room. And it isn’t what it looks like. We only drank half of one of those bottles of wine. 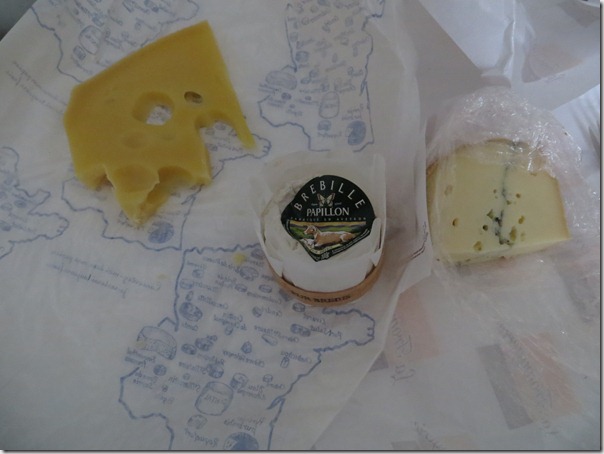 What can I say, we like good cheese. Linda got some Emmenthal with holes in it, while I got a chuck of Mobier with the line of ash it, as well as a wonderful sheep cheese for dessert. The red wine was recommended by the proprietor of the cheese shop as perfect for my two cheeses, and it was. Linda even liked it, so it must have been perfect. As we ate we talked about our canal boat trip of a few years ago and how much John and Judy would have enjoyed this. 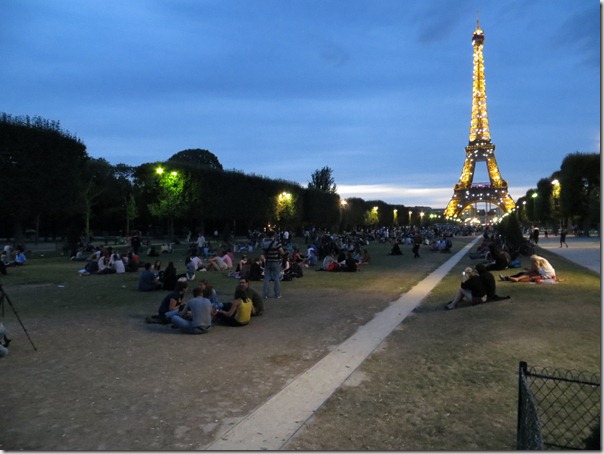 Nine o’clock found us at the Eiffel Tower, along with many other people, to watch the sparkling light show. The tower is normally lighted after dark, but on the hour, the lights sparkle and dance, making for a spectacular show that no matter how many times one watches it, it doesn’t get old. It’s one of those things that is rightfully called a happening. 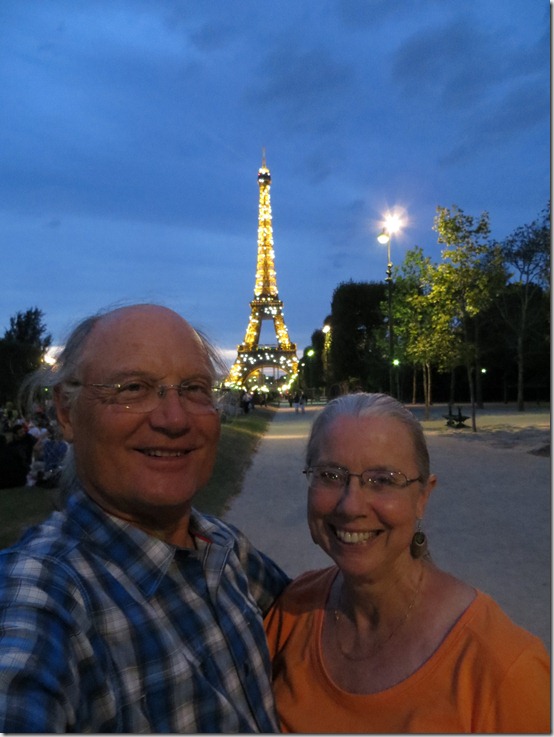 Photo at arms length by Bob of Linda and her husband in front of the Eiffel Tower. Don’t think it is easy taking a photo like this. Just look below to see the ones that were deemed not good enough to be chosen as “the” photo to show. 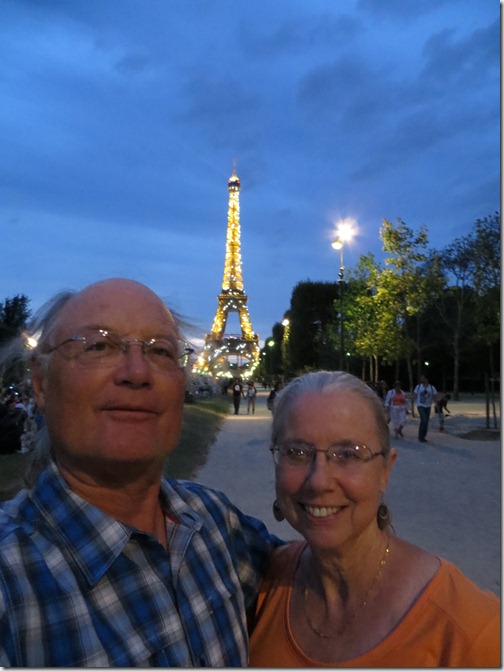 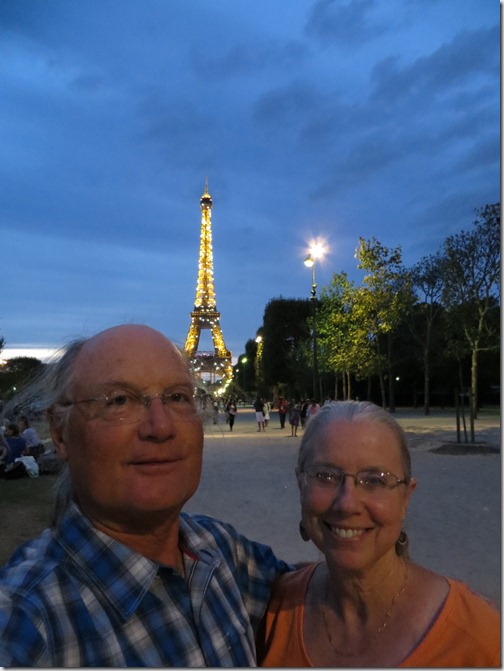 Then there are the ones that Linda took. 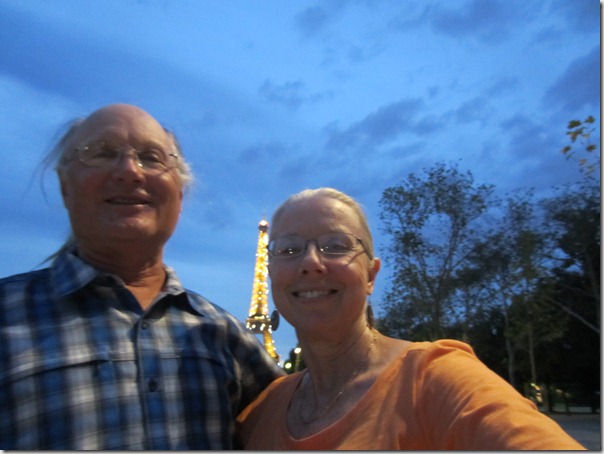 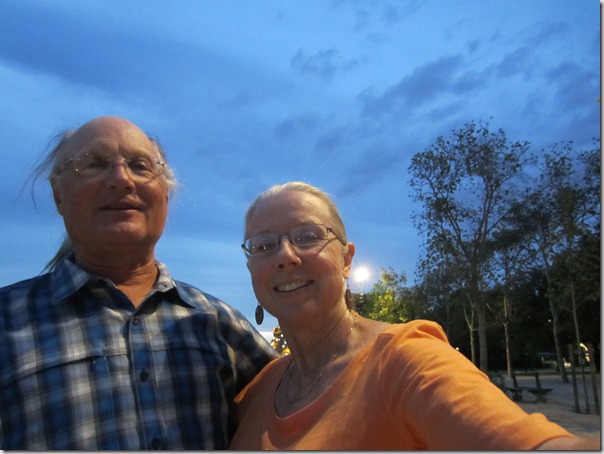 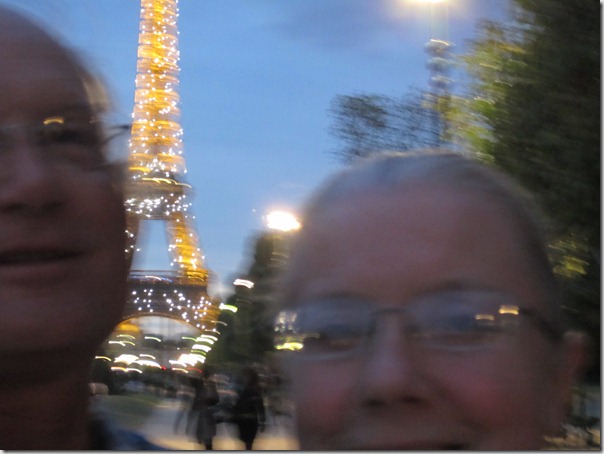 You could say that I can either take a photo or smile, but not do both at the same time. As for Linda, the best we could probably say is that she is hopeless. What do you say about a girl can’t seem to hold the camera steady. and if she does manage to hold it steady, she cuts off part of the Eiffel Tower. But in the end Life is about having fun, and did we ever have our share and more of fun today.
Posted by Bob and Linda at 3:13 PM