The hacking of our because-we-can.net website turned out to be a false alarm. It was most certainly not there and that pretty girl that wanted you to go to places that you really didn’t want to go was really there. The problem was that our billing came due and got messed up somehow. We had paid the bill ahead before we left for Europe, but there was still a problem. All is fixed now and we are as good as ever with no damage done, other the website than being off line for about 36 hours. Add in the fact that we couldn’t receive any email during that time and it was doubly exasperating. As I said before, we are glad we decided to just use the  Blogger account to post while in Europe. Now if I could just learn how to use all the little things in Windows LiveWriter, I would be a happy boy. And everyone says blogger is easy to use. Not when you’ve always used html to write your blog it isn’t. Guess it’s just the old dog and new tricks thing. 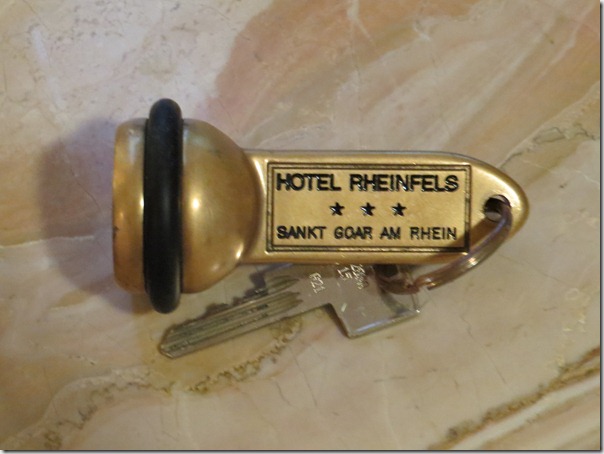 This was our key to our room in St. Goar. Linda insisted I post a photo of our half pound key. It was so heavy I felt like I was listing to the side it was in. After the first time I solved it by removing the key from the brass anchor, and leaving the anchor in the room, only carrying the key.

What follows is Linda’s four photo vignette of breakfast, making sure her soft boiled egg shows. 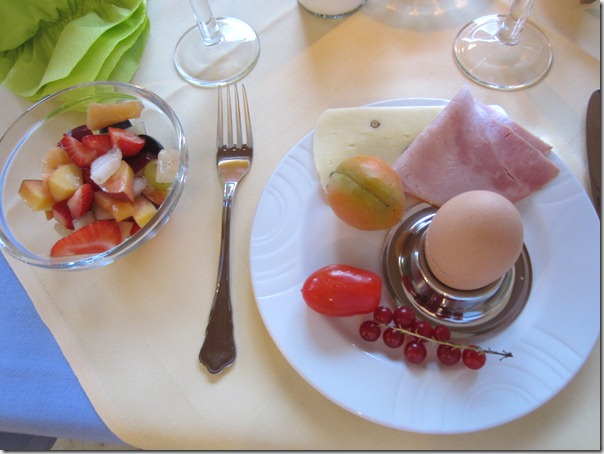 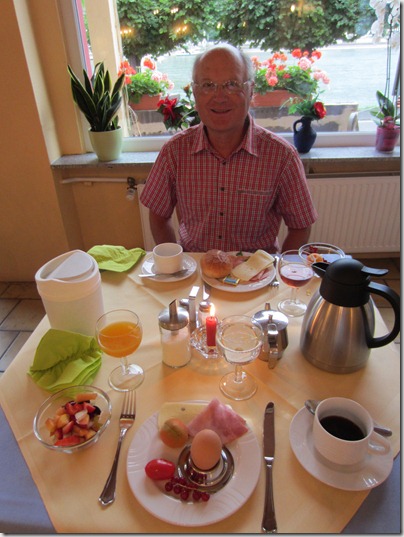 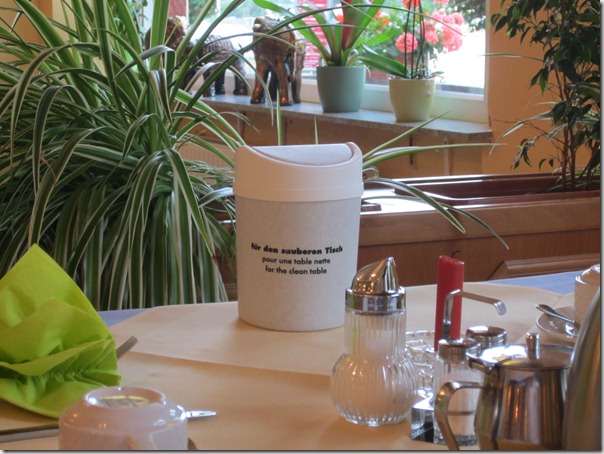 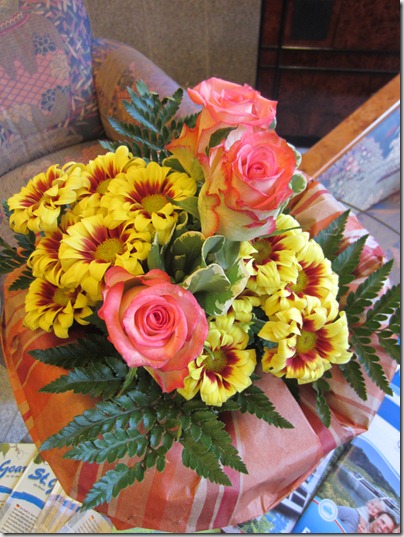 So maybe there is five photos. You do realize don’t you, that if I don’t post the photos taken by “She Who Commands Me to Obey”, I may not live to finish this trip. Photo #2; I have a smile on my face this morning. When she got her camera out I plastered it on my face and kept it there until she put her camera away.

Photo No. 3: Where we deposit anything and everything while eating that doesn’t get eaten. Butter paper, plum seeds, current stems, egg shell. It all gets deposited in here. Nothing like this in the States, then again, eating trashy, greasy food in Denny’s is the norm in the US.

Photos 4 and 5. The norm in the places we stay in Germany. It’s called class, it’s found everywhere we have been in Germany, and it is something that I must say is sadly lacking in the States. 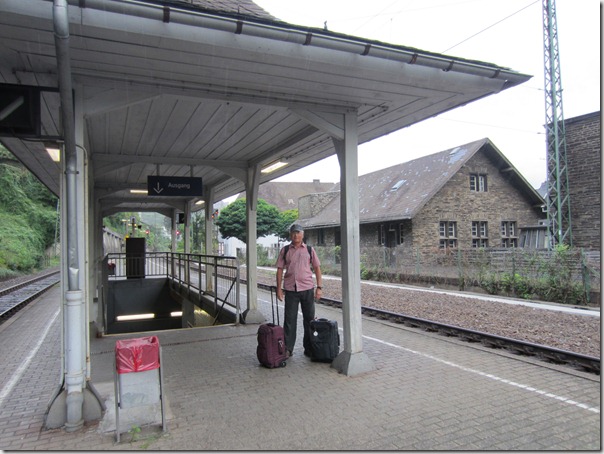 Waiting in the rain at the train station in St. Goar for the MRB to Koblenz. This station is no longer manned, so here is where you buy your tickets. 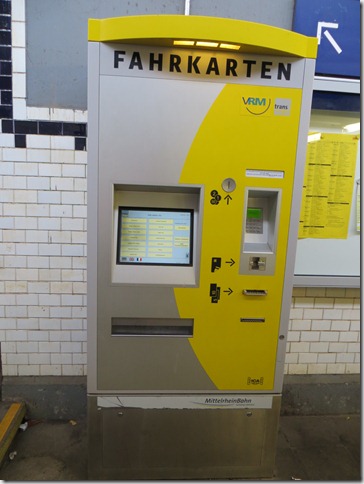 Just use the Fahrkarten machine. We chuckle at all the people who can’t seem to figure out what to do. 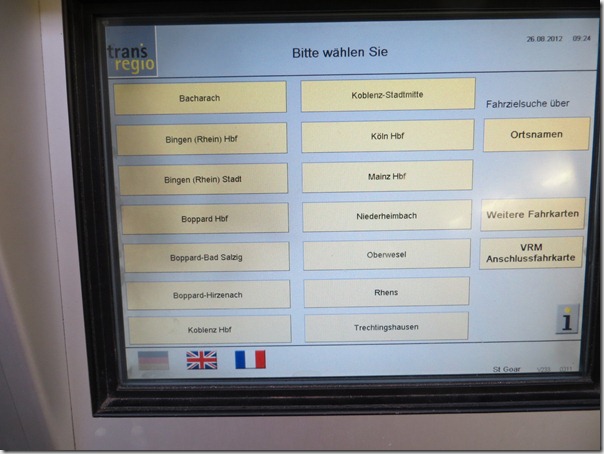 It’s so easy. Just follow the instructions on the screen, feed you money or credit card in the right slot and your ticket will be printed. I figure that if someone from Italy can figure out how to buy a ticket from this machine, there is no excuse for we Americans not figuring it out also. Hint: tap the British flag and everything is in English! And if there is no English? That’s when it becomes fun at the moment and a good story later.  The one thing we leaned long ago about traveling in Europe is not to get upset over things that you have no control of. And believe me, we already have a number of stories to tell during happy hours this winter in Retama. 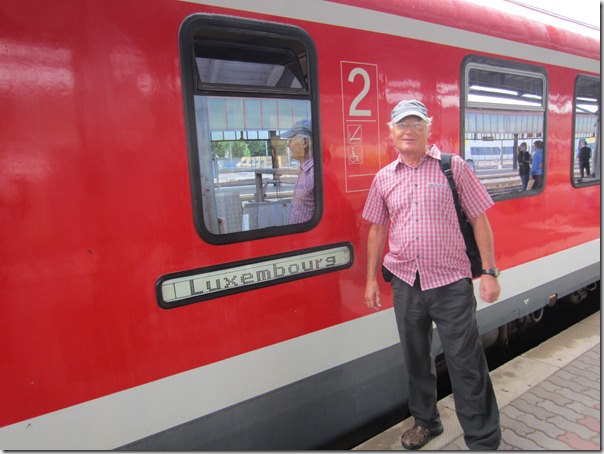 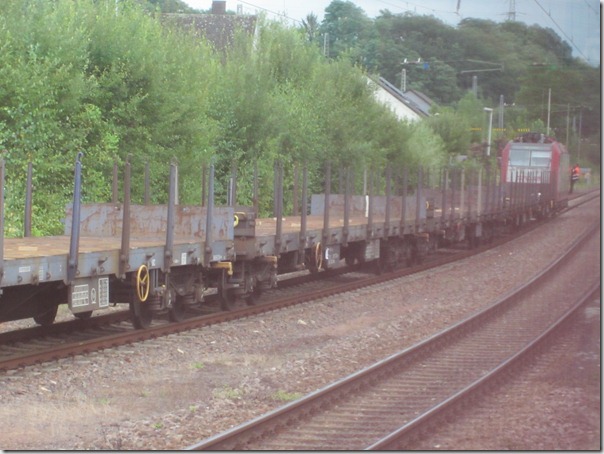 Unfortunately getting there proved far harder than we anticipated. This is a photo out our train window of a freight train that broke down going in the opposite direction. The bad news was that he was so long he was blocking our track that we needed to be on. 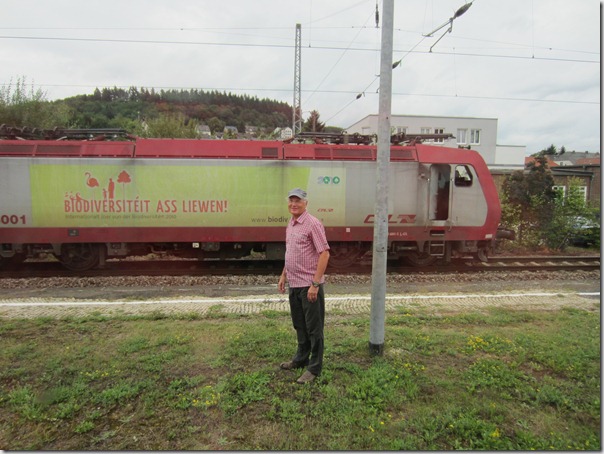 They finally told us we could get off our train and get some outside air if we wished. What was that old saying? “Last one out is a rotten egg.”  If so, I was the freshest egg in the carton. 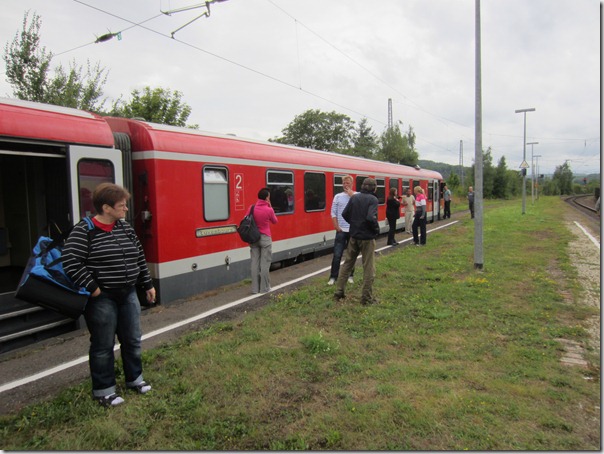 It didn’t take long before some of the other passengers were outside also. 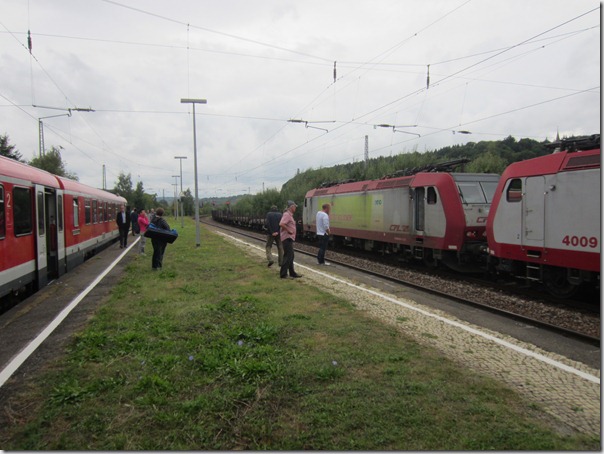 The neatest thing about all this was the fact that the conductor could speak enough English to allow us to have an idea of what was going one, but that was all. Eventually a tow locomotive arrived and a long time later, the broken down engine along with a very long string of cars was towed away. It reminded us of a few years ago in France when the engine of our train broke down and had to be towed to the nearest station. Was that ever a good a good story or what. There the conductor spoke absolutely no English and the relief trains were going in two different directions and we had no idea as to which one to take. You really had to be there to appreciate that one. 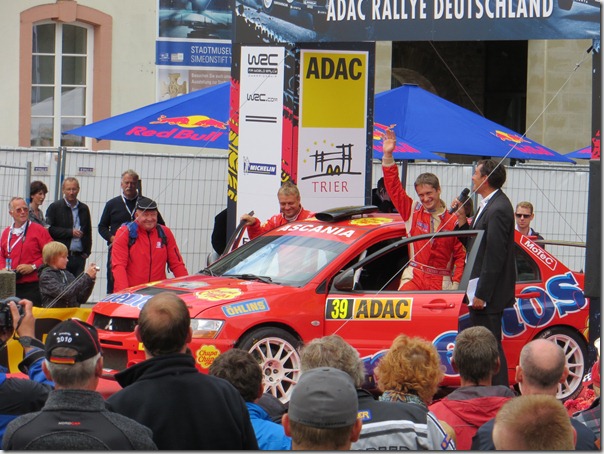 All the above that meant we didn’t have even time to do any sightseeing in Luxembourg given the shattered train schedule. If we did anything at all we weren’t going to get back to Trier, Germany much before 8 o’clock, so we just took the next train back to Trier. That was when we stumbled upon the end on the ADAC Rallye Deutschland race. We got to listen to the interviews with the drivers, and cheered along with the crowd. Who knows what we were cheering for, but it is thing, not what it was for, that mattered. 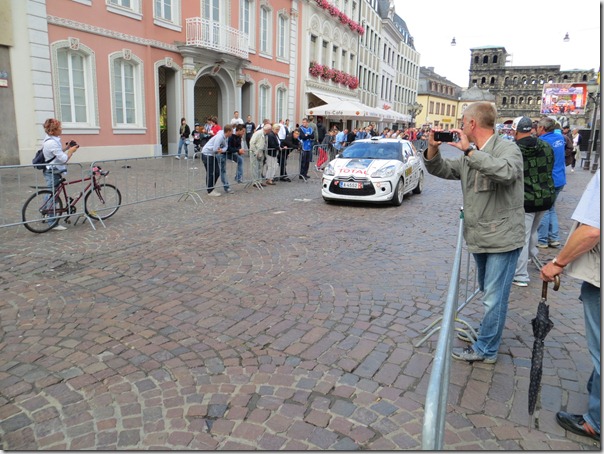 Later we walked up the street from where the interviews were taking place, and got to feel the very cobblestones shake as the cars came roaring past. It truly was one of those, you had to be there to appreciate it,  moments. 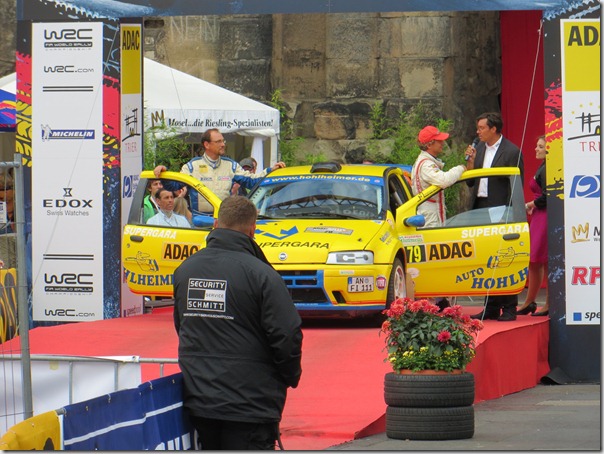 Whoever this was, he was by far the crowd favorite. And when he revved his engine and took off down the barricaded lane the crowd really erupted. 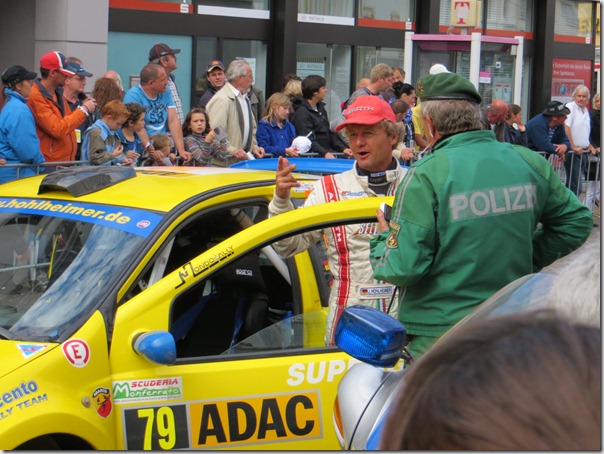 Just a little further down the street we encountered this. I believe he is saying, “But Officer, I still had two wheels on the ground even if it looked like all four were in the air.”  Okay, so not really. What was happening was that all the police officers were trying to have their pictures taken with him. I have no idea if he was the winner or not, but he was certainly was the most popular driver by far. As a side note, I ran into him later in the stairs in our hotel. If that isn’t a small world getting smaller by the minute, I don’t know what is. 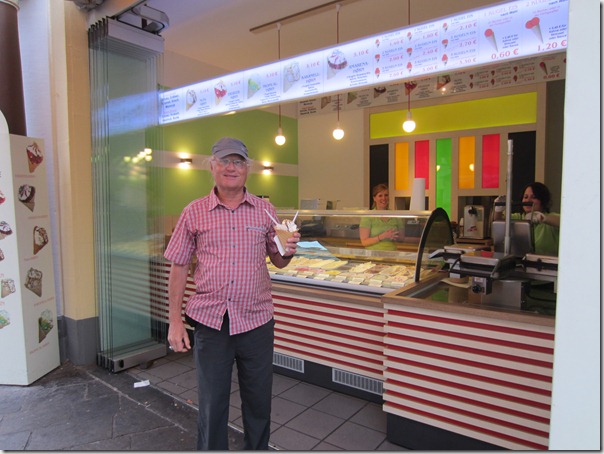 We started with food and we will end with food. Dinner at a little sidewalk café was absolutely fantastic. If you have never had Natural Schweineschnitzel smothered in gorgonzola cheese sauce with absolutely dead perfect, totally crisp on the outside, soft on the inside, pommes frites (French fries), you have no idea of what the perfect meal after a most interesting day can be. Linda’s idea of perfect came later when we bought this walnut and hazelnut waffle cone that was topped with whipped cream, the real stuff.

Sorry to have left out much of what we did today, but I figured the highlights would be good enough which is what we have to to do every day. Tomorrow we plan to do some sightseeing around Trier, which is Germany's oldest city. Most of the things we want to see are Roman ruins, something we seem to never get enough of. As we say good night; May all of you difficulties in Life be as small as ours were today. Besides, we have the rest of our lives to get back to Luxembourg and do some sightseeing, because Life isn’t over till it’s over.
Posted by Bob and Linda at 2:32 PM