A Long Day at the Louvre


Before I begin, Americans say: loov, the rest of the world says: loovra. We know some people from our former life that would insist the rest of the world is pronouncing it wrong. They are also the same type of people who tells that they would never travel out side the US because as there too much to see in the US. There is nothing like a little travel to open ones mind to the greater world that is out there, too bad some peoples mind’s are wired shut. 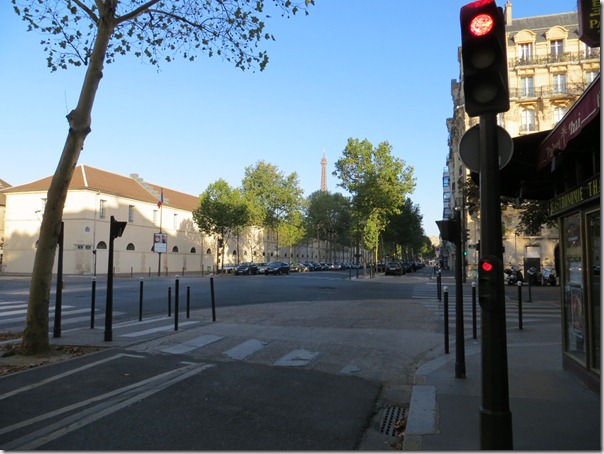 Paris is the most visited city in the world, yet early in the morning, all the hustle and bustle is still waiting to break loose. I keep forgetting to take another photo of this same intersection in the late afternoon when we usually return to our hotel. That is when you take your life into your hands crossing the street. I read somewhere that as long as a Paris driver misses a pedestrian by a meter (three feet) it was no problem. I joke with Linda that she has now become a real Parisian because she no longer pays any attention to the color of the lights, she only calculates if there is enough time time cross the street without being hit by a vehicle. Paris joke: How can you tell the tourists at the intersection? They are the ones waiting for the light to change before crossing. 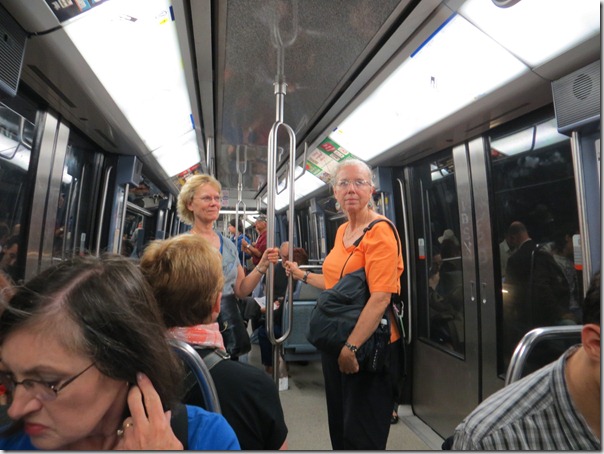 Photo of several young, beautiful Parisians demonstrating Metro safety. Notice the bags in front of their bodies. Notice how they they are looking around, being aware of their surroundings. Actually pickpockets are very common in Paris, and one member of our group had an encounter with one yesterday on the subway. They yelled and grabbed the hand that was reaching in the pocket, and the pickpocket fled. Does that mean you should never come to Paris? I guess it depends on on your outlook on life or Life. 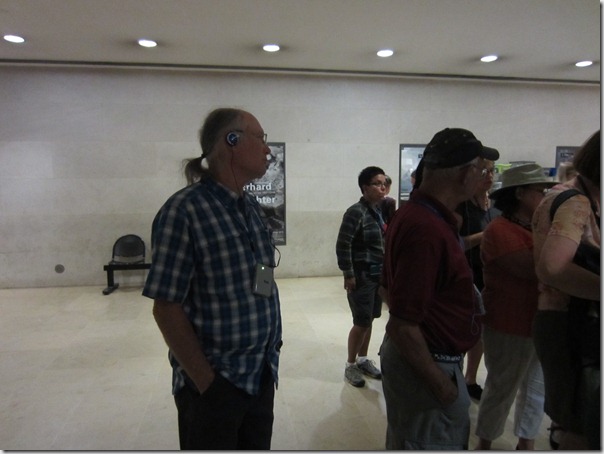 The morning saw us taking a guided tour of the Louvre, meaning that we were outfitted with listening devices so we could hear our guide. They give you a fit in the ear, ear piece, but with my hearing aids it doesn’t work, so I bring along my special over the ear earphones. Everyone one else had a single in the ear earphone, I had my mine for both ears. I could be a room away and hear the guide perfectly, they all had to be right next to her. Smart Bob. 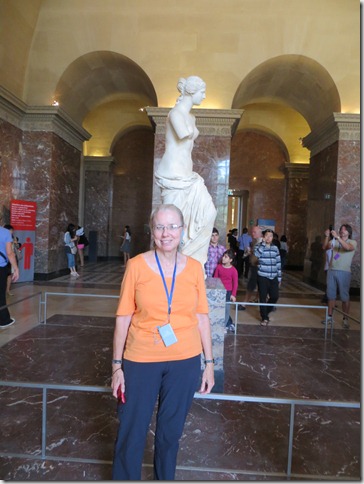 We spent the entire day in the Louvre, two hours this morning with the tour and the rest of the day on our own. Took over 400 photo, and no you won’t see them all, ate lunch, sat on benches and rested, and looked at things that are in every history text book ever written. Here you can see the model for Venus de Milo in the foreground, while the while marble statue of Venus de Milo is in the background. 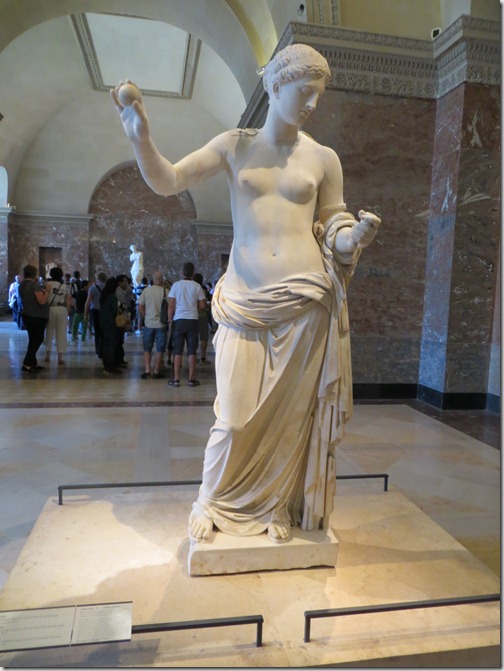 It is hard to believe just how many sculptures that have poses like this are in the Louvre. I mentioned to Linda that when she was younger she could have been the model for this statue. For some reason she didn’t seem to think that was very funny. Even my attempt at a scientific explanation of the effects of age and gravity seemed fall on deaf ears. I don’t know, maybe Linda’s just jealous of how I’ve been able to keep my youthful appearance all these years. I know, I know, Bad Bob. 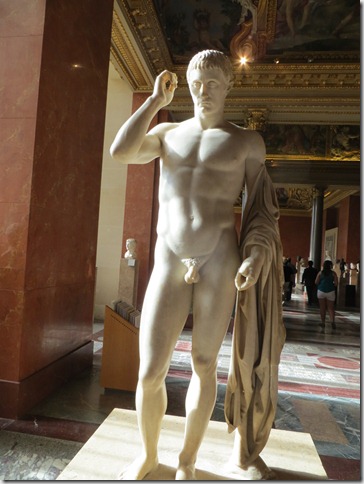 Just to be an equal opportunity blog, here is the other side. Linda wondered why both the upper and the lower part of the male was always left uncovered, while only the upper part of the female was left uncovered. For once in my life I had no answer for her question. And search as much as we might, never once did we turn up a single female form that was completely disrobed. See, this is why we travel to Europe. You never know what mysteries you will uncover. 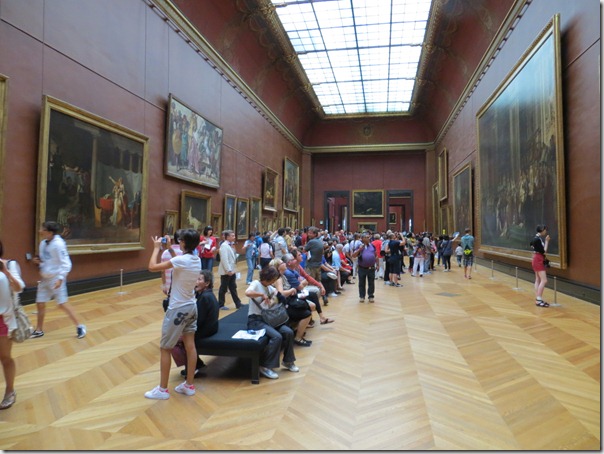 I’d better not leave out the paintings, the little paintings and the big paintings. Most of the sculptures we can figure out on our own, but for the paintings you either need a book or a guide. 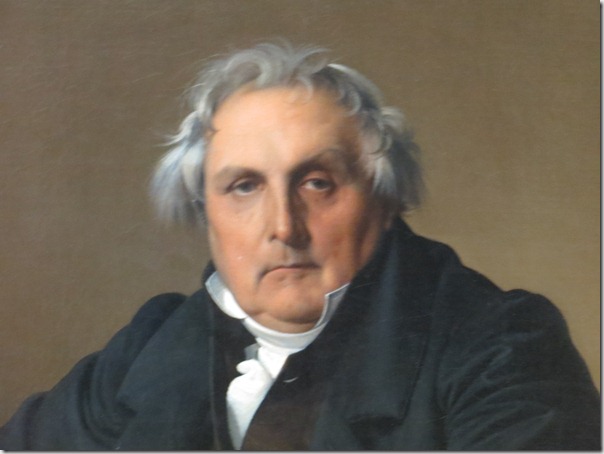 I really liked this painting even though I don’t know who painted it or who the subject was. My poor  photograph doesn’t begin to do it justice, as it was as sharp and perfect as any picture. 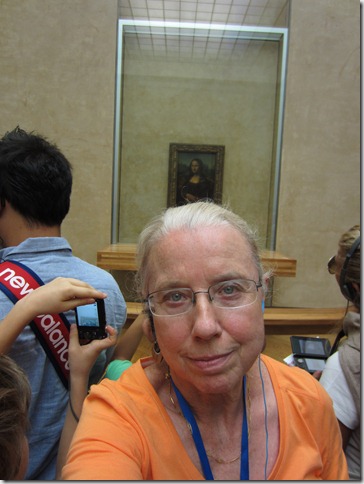 Why Linda went to the Louvre. Camera held at arms length, that is the Mona Lisa behind her.  Last time we we in the Louvre, Linda didn’t get all the way up to the front to take a photo on the Mona Lisa. Today she said nothing was going to stop her and nothing did. 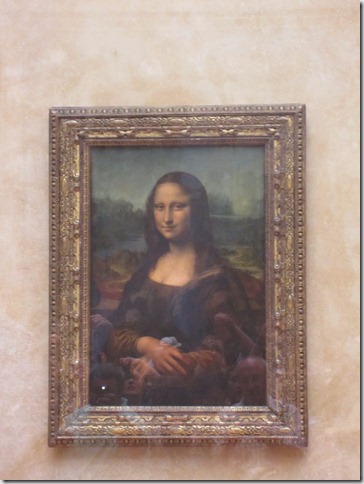 Linda’s front row photo of the Mona Lisa. One, the photo is actually very small. Two it is behind a protective glass shield. Three, photos are less than perfect. Four, Linda was still a very happy excited young girl for getting so close to one of the most awesome paintings ever created. 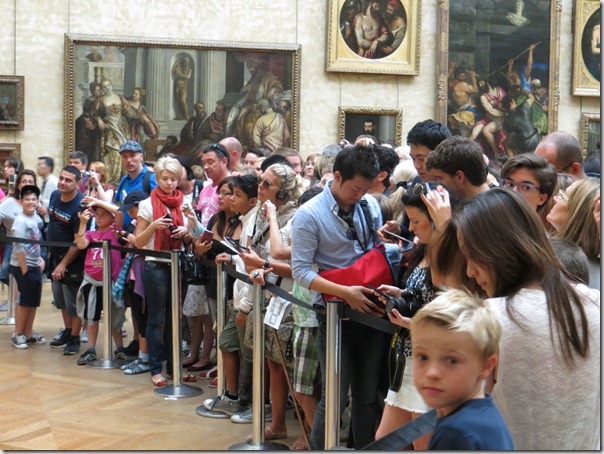 This is the mob scene in front of the Mona Lisa. If you look at the red bag and go up from the top corner of it, you will see the back of a blond head head with a pony tail and a black scrunchee around it. That is Linda trying to make her way back out of the crowd. The room is enormous. The crowd is massive. it is one of the, you have to be there to understand it, kind of things. 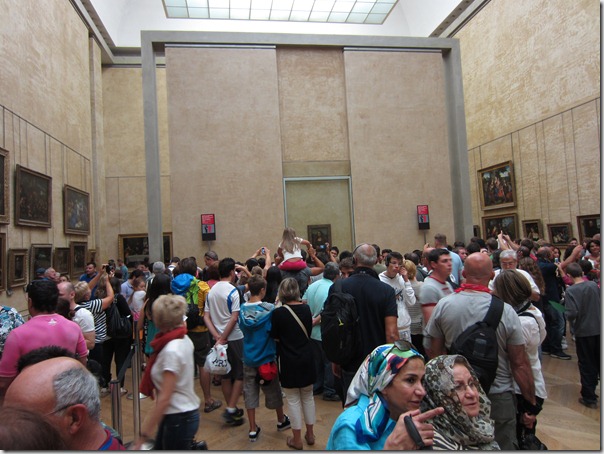 From the back of the room looking towards the Mona Lisa. 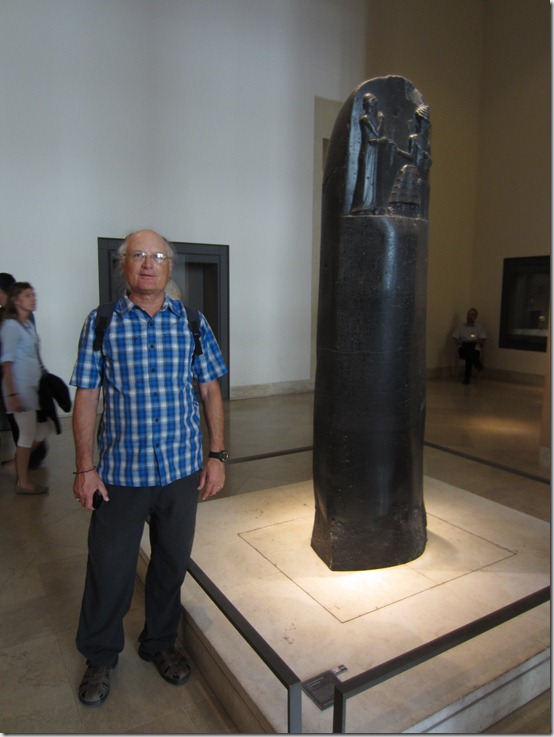 My turn. You all heard about it in school. Now, for the second time in my Life I get to stand beside it. The Code of Hammurabi. In several months I’ll be be back at the Brit standing beside the Rosetta Stone again. What more could a boy who has always had a love of history ask for. 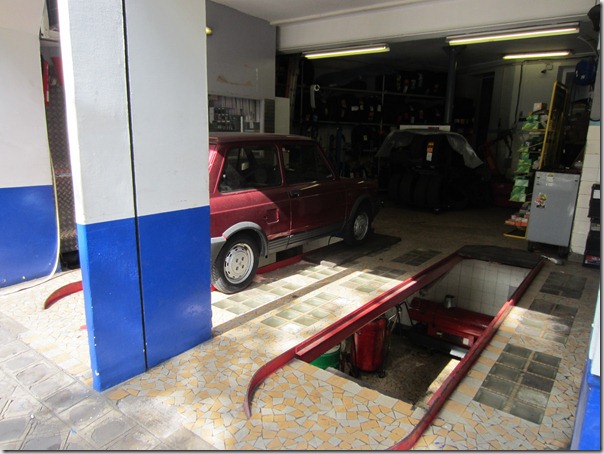 This obviously has nothing to do with the Louvre, but there is simply no good way to end a visit to such a museum other than to just walk out. We caught the No. 69 bus that stops near our hotel, and walked back. This is a Paris mechanic garage. Just several spaces in a building, and we are standing on the sidewalk. Everything is different here, and that why we we will be be back in a week, staying in an apartment after our tour is over. We don’t like big cities, but Paris and London are our exceptions. It rained on our way back to the hotel later tonight after we went back out, but no way did it dampen the fun we have had in the City of Lights. Good bye Paris.
Posted by Bob and Linda at 3:15 PM