Not Every Day Can Be a 10, But Close is Good Enough 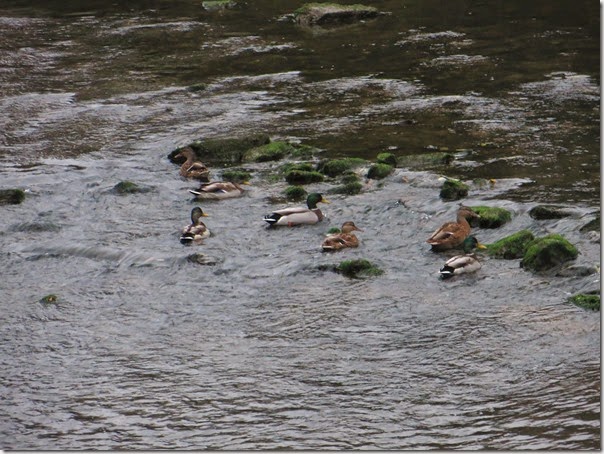 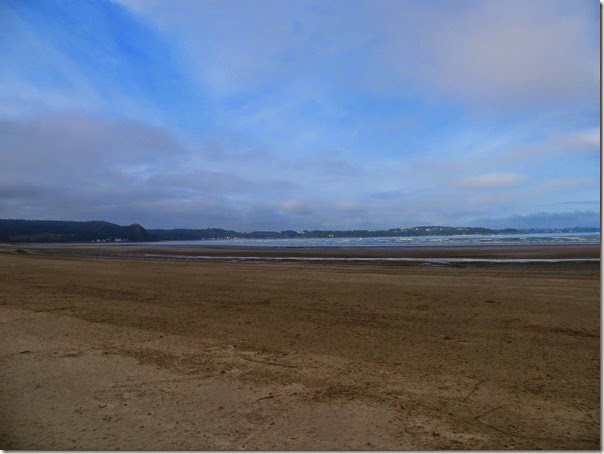 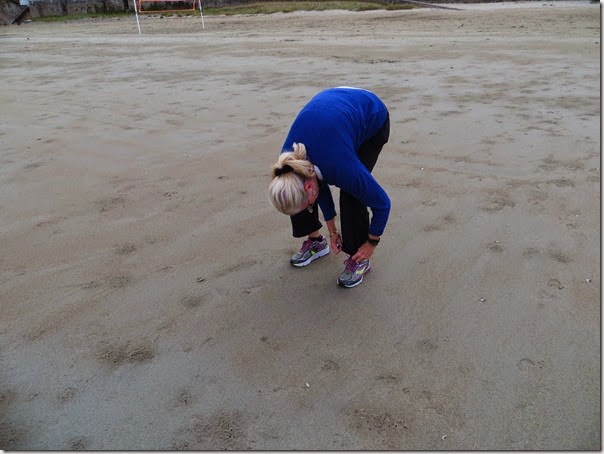 Short pants Linda. Beaches mean shells and shells require beachcombing and beachcombing means the possibility exists that water might reach places it shouldn’t. And since a pound of cure is worth an ounce of prevention I headed right out onto the beach. Meanwhile, Linda was making sure her pants suffered no water intrusion damage. My motto: A little water never hurt anybody. Linda’s motto: No water ever touches my body except where I let it. 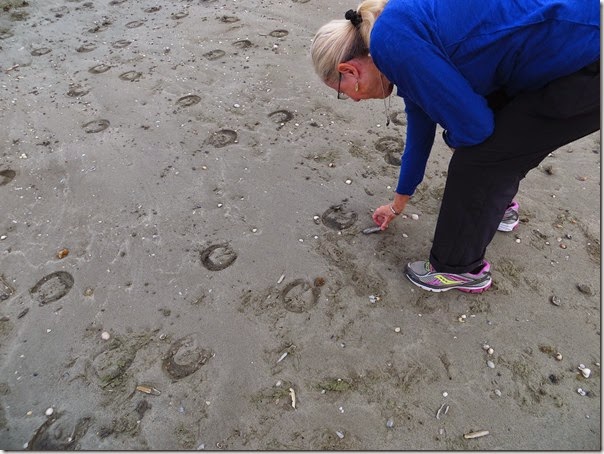 Sometimes Linda really amazes me. Take this for example. She knew there were horseshoe crabs here because she could see their tracks, but hunt as much as she could, she couldn’t find them. 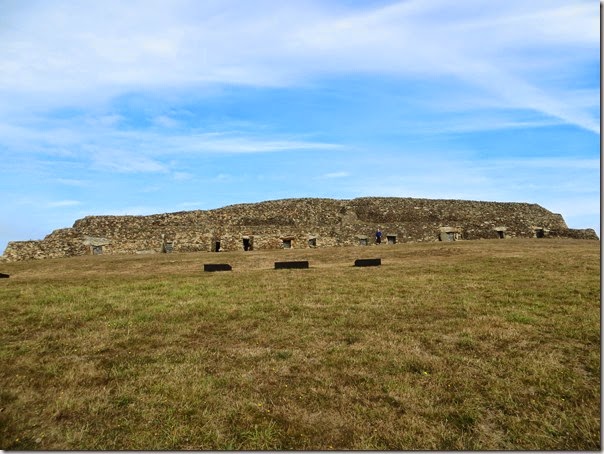 Linda is in this photo. Linda is very hard to pick out. Linda is standing in front of the largest mausoleum in Europe. Linda is a very happy girl. 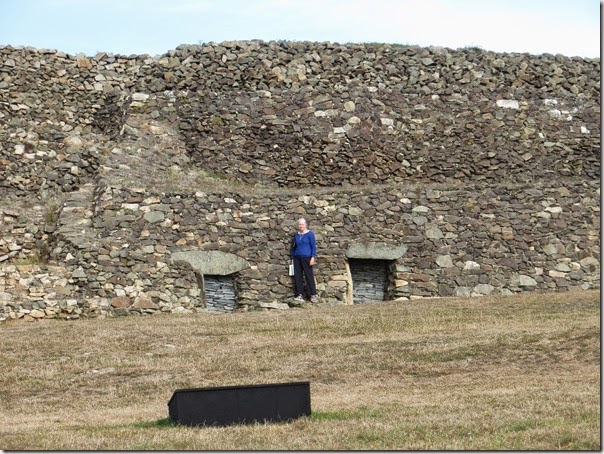 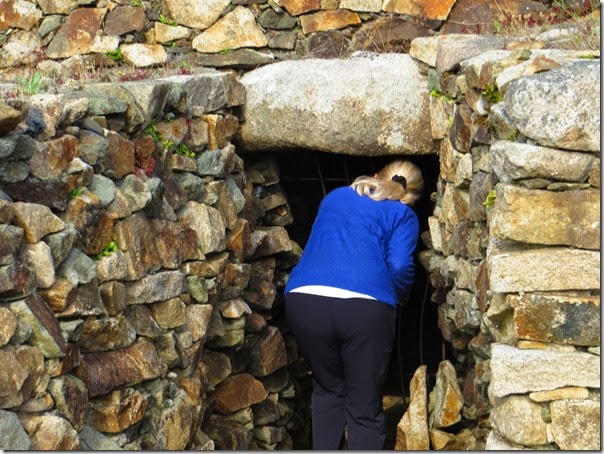 A mausoleum means “dead guys” and if there is an opening Linda is going to peek. 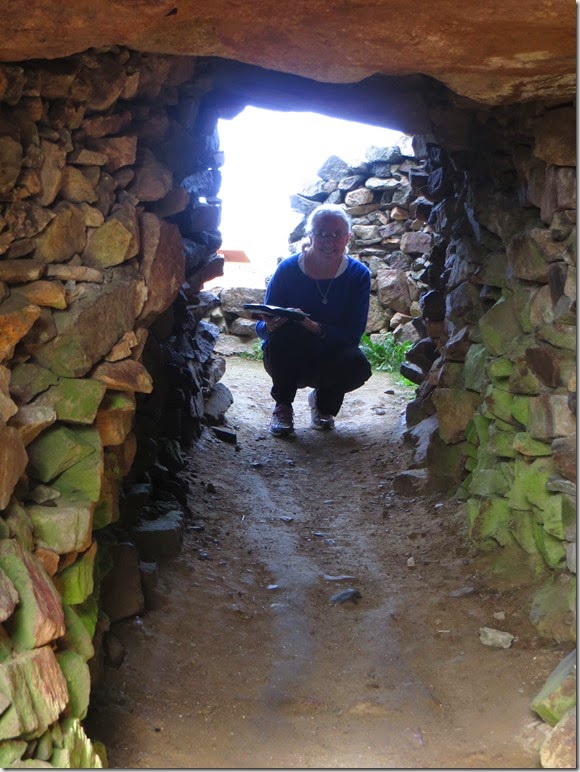 What a huge smile!! What a happy girl. She had a great time exploring every inch of this wonderful National Monument. And so did I. 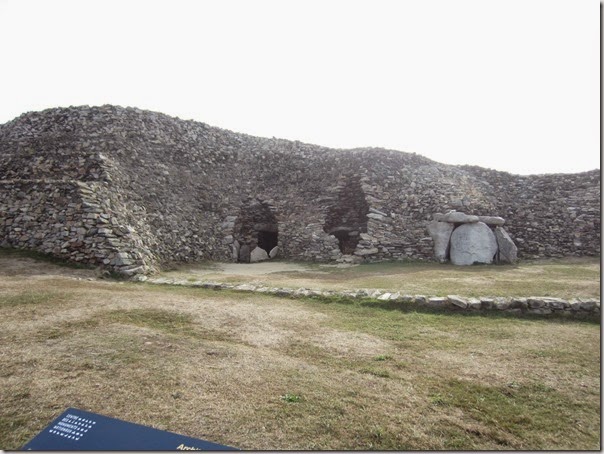 This area was quarried for stone which was what led to the discovery that this huge earth and vegetation covered mound was was really an elaborate burial structure. The quarrying exposed several of the chambers that were originally inside the mound. 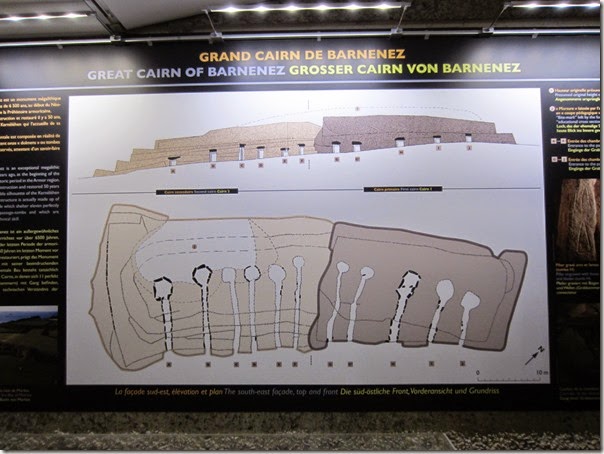 Inside the visitor’s center there was a diagram of what the mound would have originally looked like. This site was a good distance from the town where we were staying but with several stops along the way to visit interesting places we saw, it made for a great day. 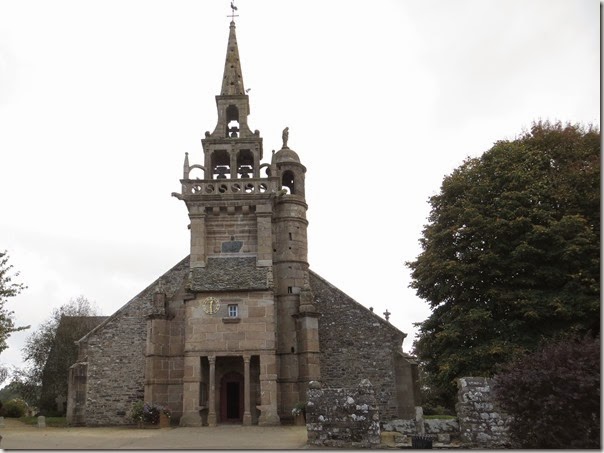 One of the things we like to do is to stop and look at the churches in the towns we pass through. Not every church though, because if we did that we would never get anywhere there are so many interesting ones. I don’t know if it luck or not, but it seems like most of the ones we decide to stop at have signs describing their history in English as well as French, it’s just that they are usually hidden off to the side where you have to look to find them. 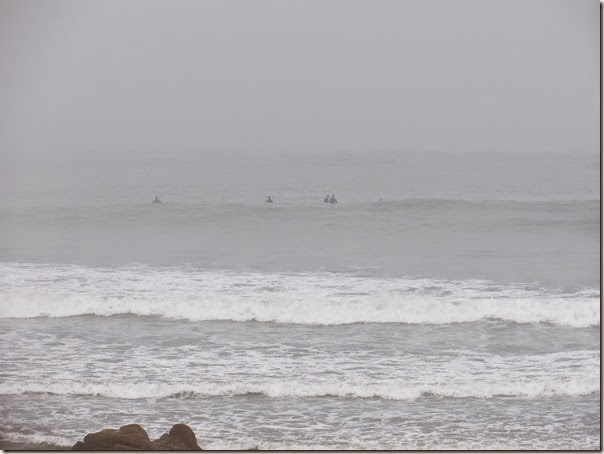 Another thing we try to do is to not just stay on the main road through town. Here we saw several vans that that had sped past us on the road turn off ahead, and we decided to follow them taking a narrow twisting road down to the water. It turned out they were surfers rushing to a section of beach where the waves were breaking. Some people plan their trip, knowing exactly what they want to see and rushing around checking things off their list. It just isn’t our style of travel. Sure we have places we want to see, but it these things that really make the trip. 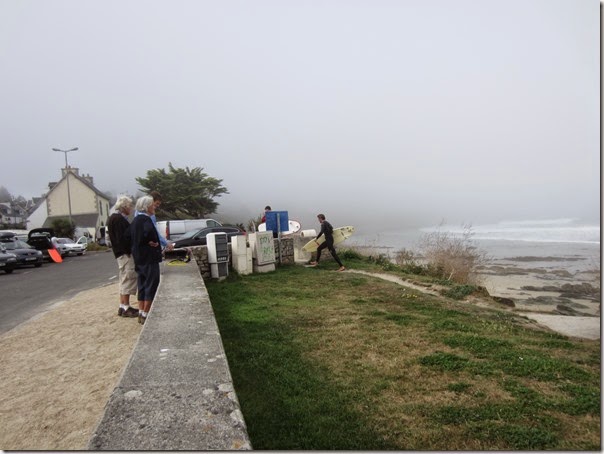 As you can tell, the fog was very heavy, but what’s a little fog when the surf’s up. 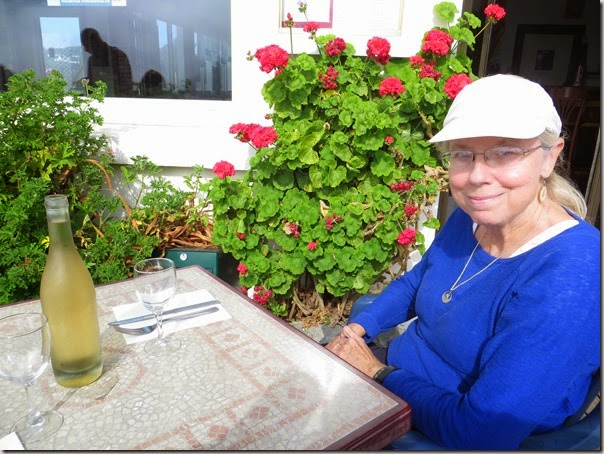 The smile is because we thought we had found a sunny spot to eat lunch. We had stopped in several other towns, but as Linda said, neither of us was getting the feeling they were the right spot, either because of the location or the menu. By the time we got to this one we were both hungry so it was going to have to do. 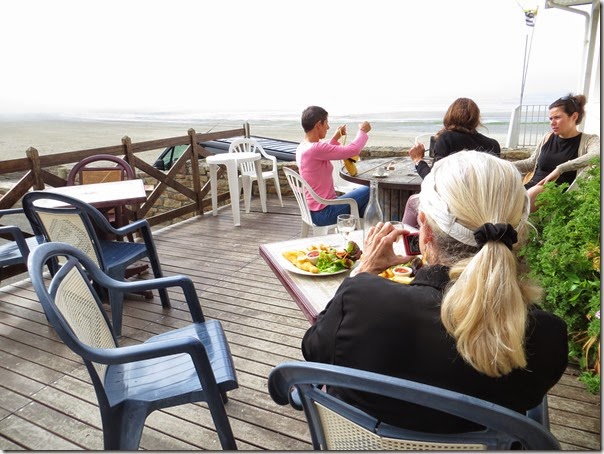 It wasn’t long before the sun was once again hidden by the fog. With the smoked filled air from the cigarettes being waved around at nearby tables, the sound of traffic in the background and the food being okay at best, it was just like sitting on the sidewalk at a café in Paris. Except for the fact the there was the ocean in front of us and the prices were very reasonable, that is. 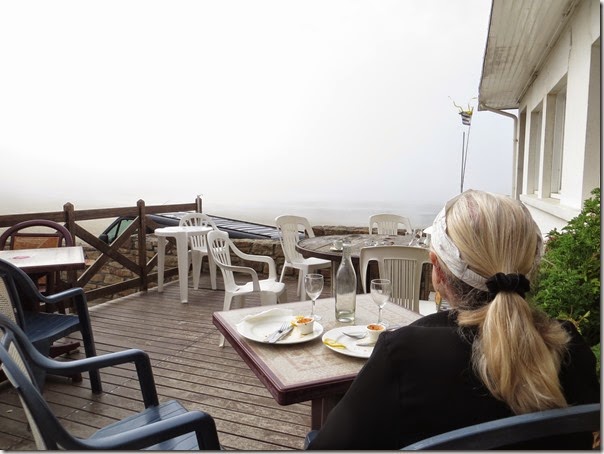 Time passes, the smokers leave and the fog descends. The clean plates reveal just how hungry we were. 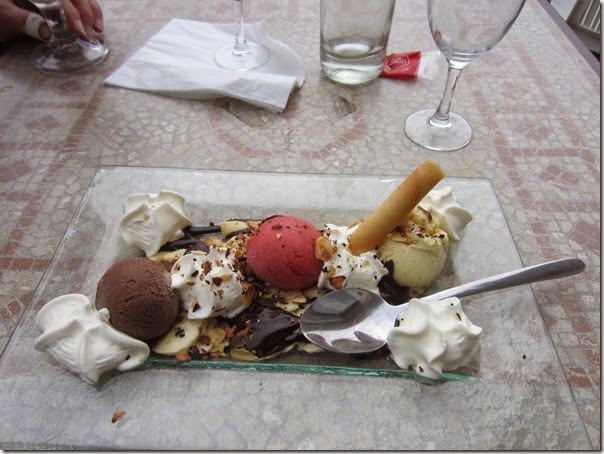 For dessert Linda ordered a banana split. She joked that it looked like the banana had “split’', that is, it had up and left as there wasn’t hardly any. These Parisian restaurateurs should stay in Paris. Oh well, it is experiences like this that help us appreciate all the more the great places we discover .

And on a side note, we were at a stretch of ocean front today that was beach country rather than fishing harbor country, which probably had a lot to do with our not finding any good restaurants. It should be interesting next week when much of our travels will be inland rather than at the shore. 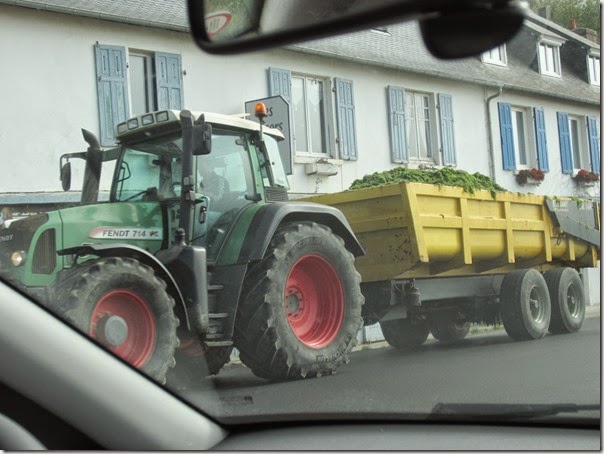 It is a huge wagon load of seaweed they had cleaned off the beach. 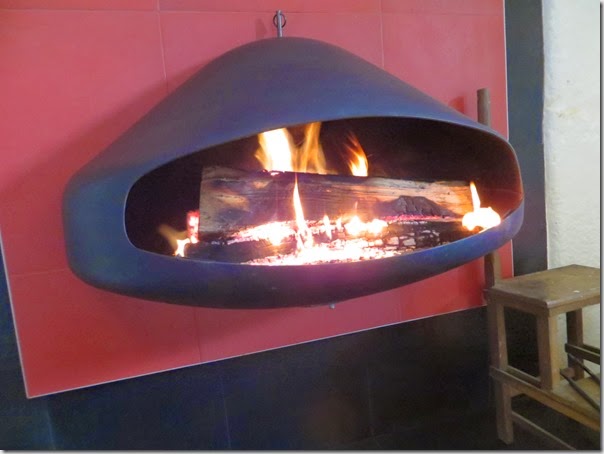 Our last fire, next week’s gite doesn’t have a fireplace so Linda will being going through withdrawal. It is such a tough Life we live. Life, angry or happy, the choice is yours alone to make. We try to choose happy even if the day isn’t perfect.