Another Awesome Day in Brittany 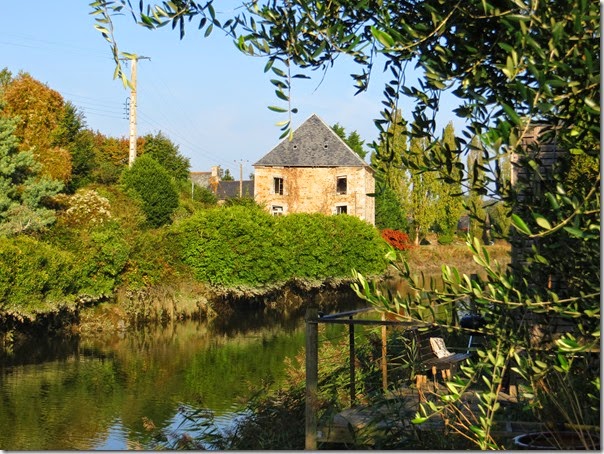 By now Linda is probably tired of me saying over and over just how much I love our gite along the river, but I can’t help it, it is totally awesome. This is the view we enjoy every morning as we sit out on the deck drinking our coffee and eating breakfast. Some people talk about vacationing in France and living like the French do, for the time we are here we really are living like they do. Beyond awesome! 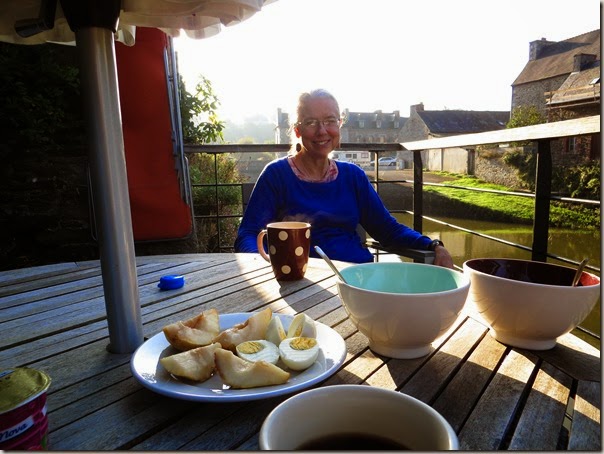 Just as I said, coffee and breakfast on the deck. That is one very happy woman! 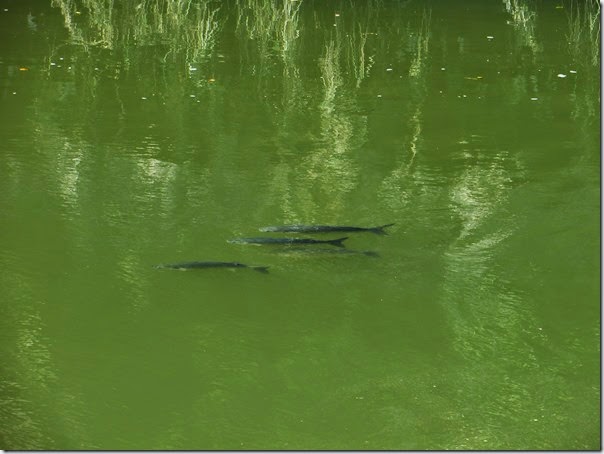 There is always something going on in, on or above the river. This morning it was a regular parade of fish going up and down stream. We have no idea what they are but they swim in small schools and are 18 to 24 inches long. They made for good water watching while we ate breakfast and reviewed our plans for the day. 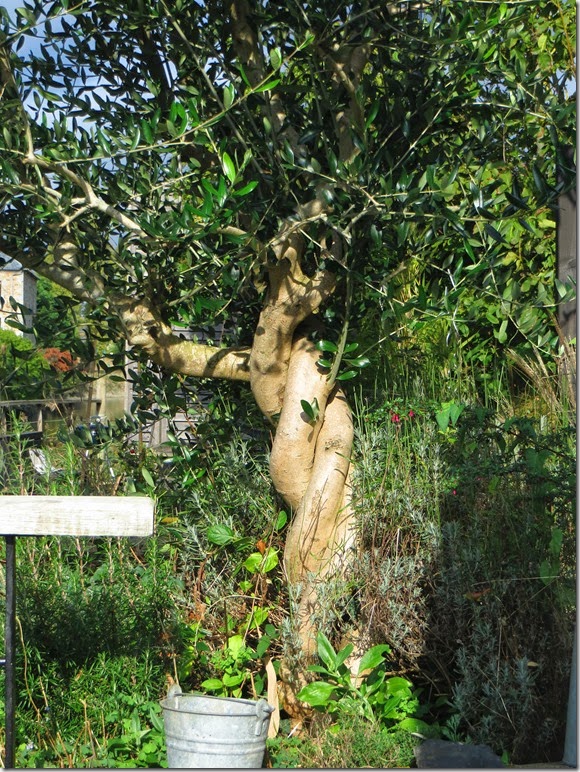 A twisted multiple trunked olive tree at the edge of our patio. There are a number of plants growing in this small space that are the same as we had at our house in California. And that doesn’t count all the herbs in the herb bed. 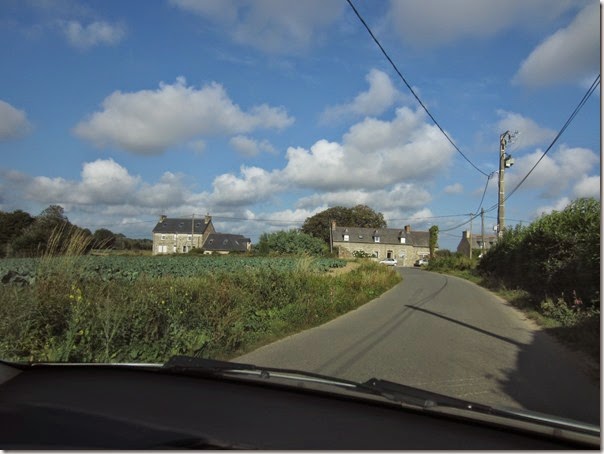 I think it has more to do with the places we visit than how Nice Navigator (yes she has again been renamed) is programmed, but we seem to find ourselves mostly driving on the back roads as opposed to the more main roads. Not to far back down this road we were on a narrow one lane section that had earth piled higher than the car on both sides of the road. It was definitely a case of someone was going to have to backup quite a ways is we had met another car on that stretch of road. Note the field of cauliflower off to the left. We passed field after field of it today. 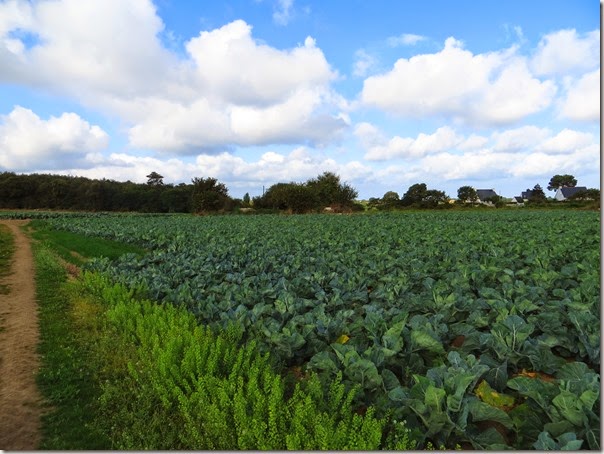 Did I say cauliflower? Why even our first dolmen of the day was out in the middle of a cauliflower field. The little white dot in the center of the photo is where we are heading. 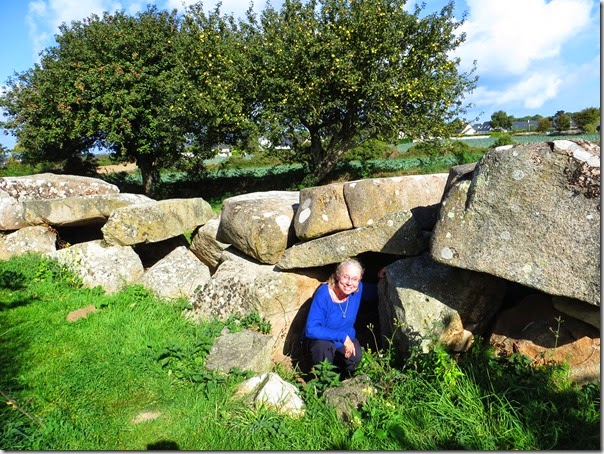 With so many Paleolithic artifacts in the area we can be choosy as to which ones we visit. Linda picked this one because it was constructed with a side opening. There is so much information available about the area that we are discovering we would literally have to spend months here just to see everything within easy day trips of our gite. And that would leave out  much of Brittany. So little time, so much to experience. 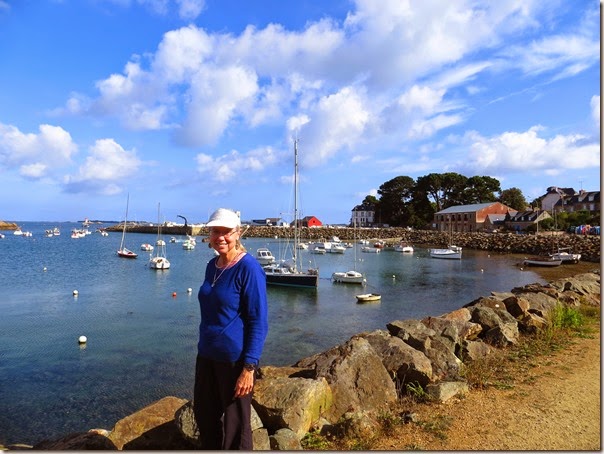 I promised a certain person not to post a dozen dolmen photos today, so fast forwarding, noon found us once again out on a point of land with a marina. This town was known for its shellfish as well as its fish. We had hoped to arrive while the water still in the bay, and as you can see, we did good. 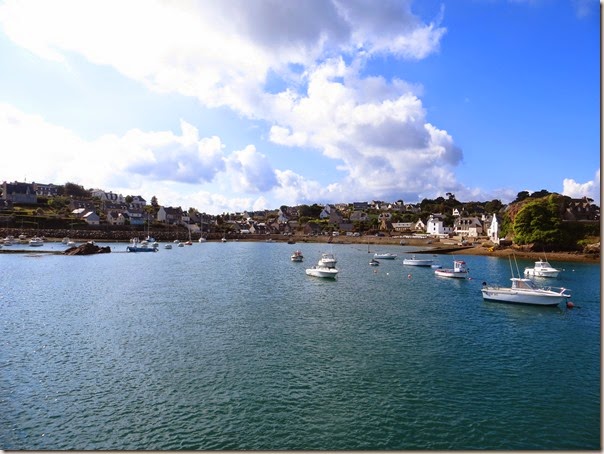 We just love these little seaside towns with their peace and quiet and lack of tourists. 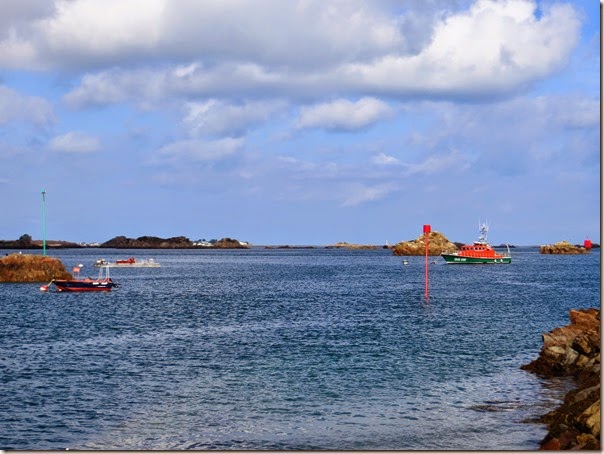 Looking out from the mouth of the harbor we could see larger fishing boats moored in deeper water. Somehow pictures just don’t do justice to what we were experiencing. 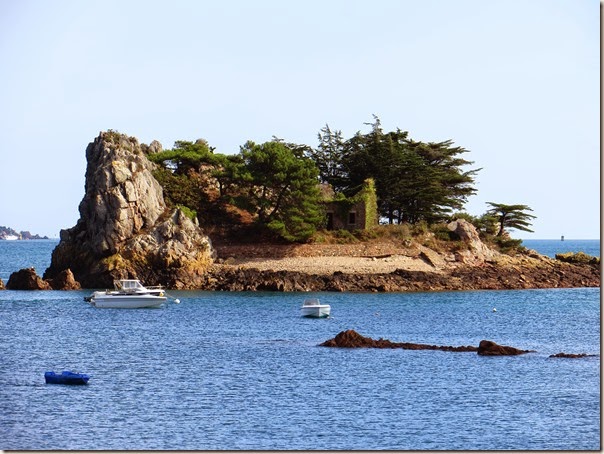 A small island with a long abandoned building, now overgrown with vegetation. As we sat on a bench looking at it we had to wonder what stories it could tell. It is from scenes like this that authors get their ideas for their novels. I may not be an author, but I had several ideas of my own that could make for a good story. We try not travel to simply say we were there as many do, we travel with the desire to experience. and while we may not always be successful in that regard, it is times like this past week that more than make up for those little failures. 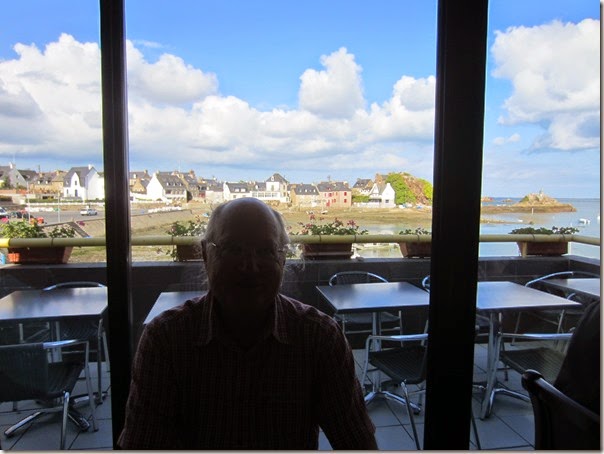 Linda’s view at lunch. Yep, another restaurant overlooking a harbor. 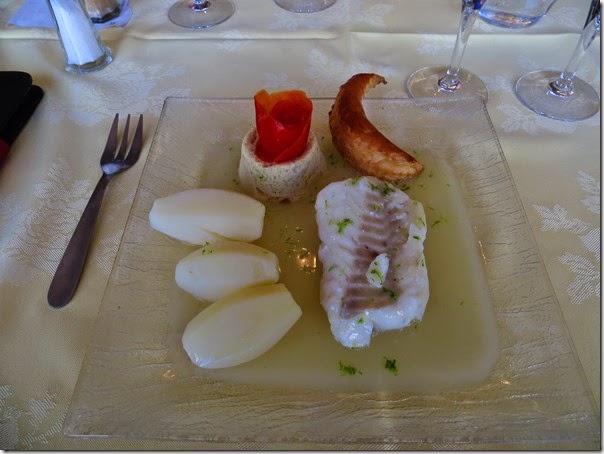 Don’t let the lack of color on the plate fool you, the food was beyond awesome even if we didn’t know for sure what things were when we ordered. Another little town on the coast, another restaurant where no English was spoken and no English menus available. We just went with the fish dish on the midi menu figuring how can we go wrong in a fishing village. And we didn’t. The fish sauce on the plate was so good I thought for a moment Linda was going use use her tongue to lick the plate clean. 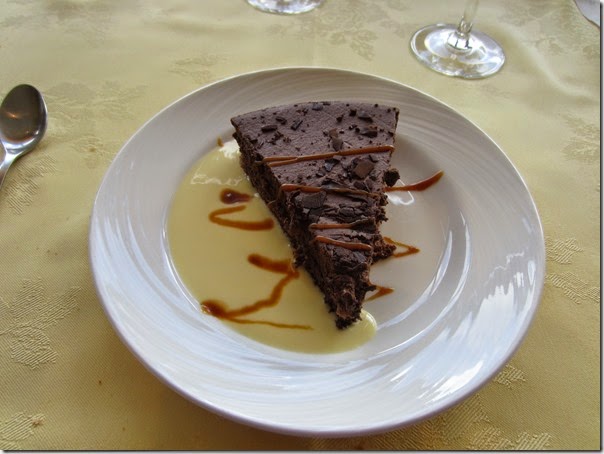 The only word we could understand from our waitress when it came time to pick dessert was chocolate. Other than it would contain chocolate we had no idea what it would be. I’ll just say that after we were done neither Linda's nor my plate needed to be washed. 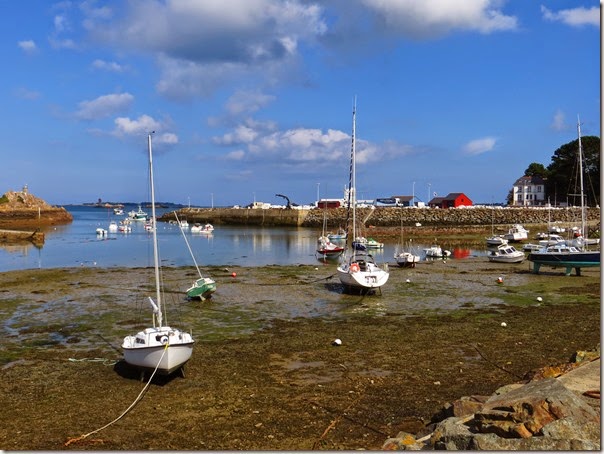 By the time we finish scrapping our plates clean the tide was in the process of going out. 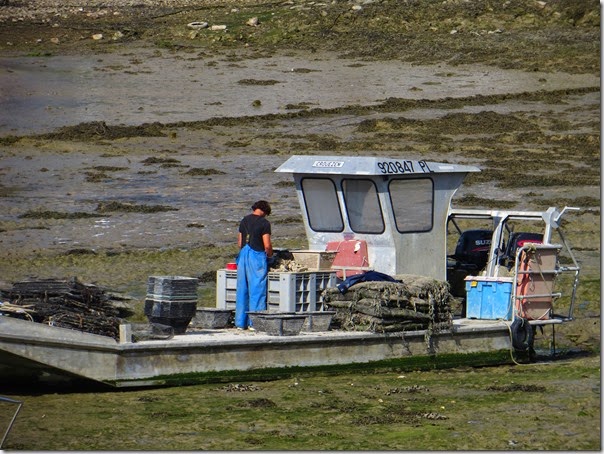 What does an oysterman do when the tide is out? 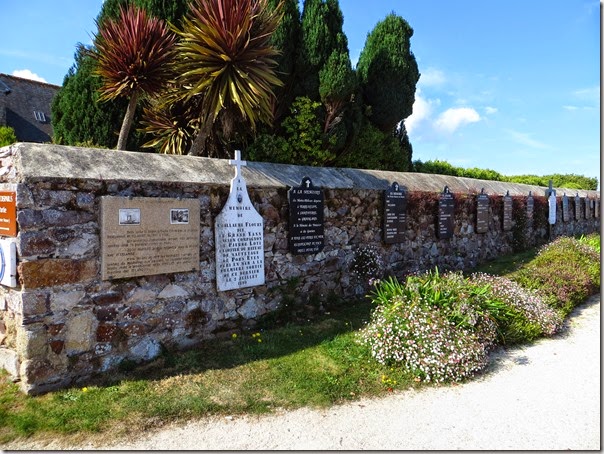 The widows wall. Another town, another story, but this one had already been written and it had caught the attention of the entire country. Further down the coast this cemetery had become famous for the role it played in an ongoing tragedy. Every year from the early 1850’s to the early 1930’s boats set out from this area to sail to Iceland where the cod were. And every year some boats never returned, disappearing sometime during the voyage. 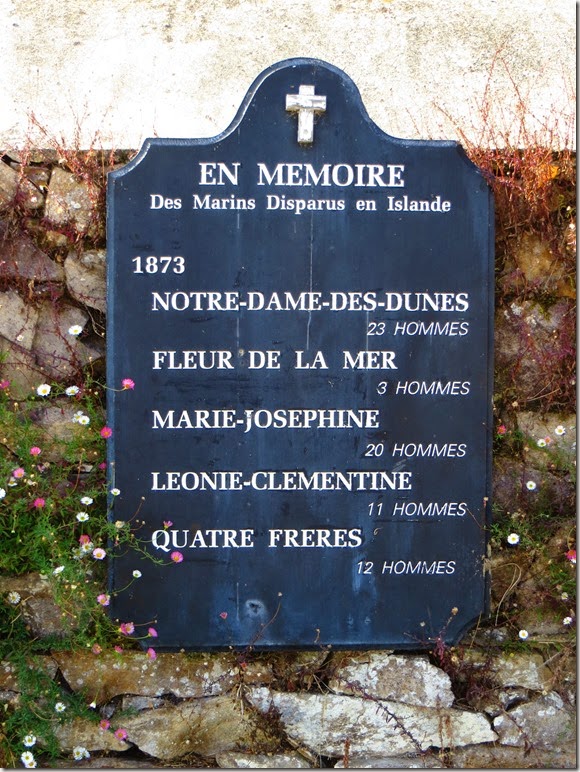 The toll in 1873. These plaques replaced the original ones which are now in the cloister of a nearby church. 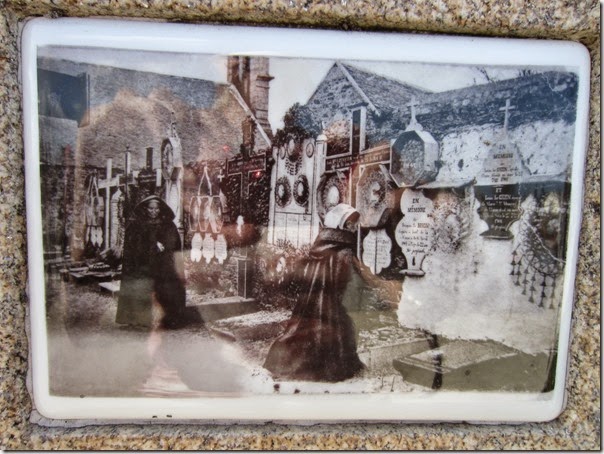 What the wall originally looked like. We hope to be back in this area tomorrow and see some of the original memorials. So much to experience, so little time to do it. Brittany beckons us back. 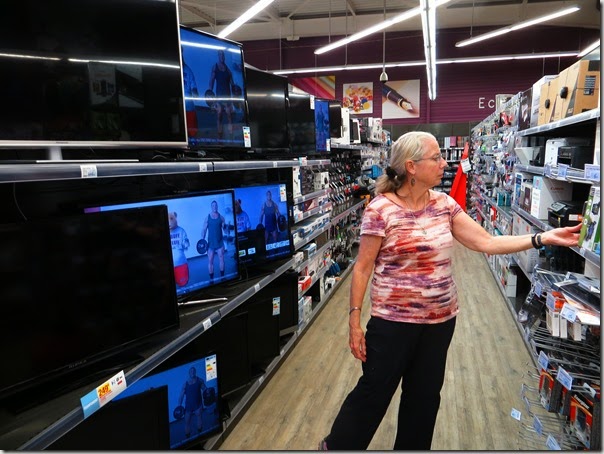 On the way back to our gite Linda wanted to stop at a store to get a few things, especially a new ice cube tray as she had wrenched apart the one in the gite several nights ago while trying to get out some ice cubes for her gin and tonic. I wasn’t quite sure what the electronics department had to do with ice cube trays, but I am sure there was some connection, at least in Linda’s mind. Women, you can’t help but love them. 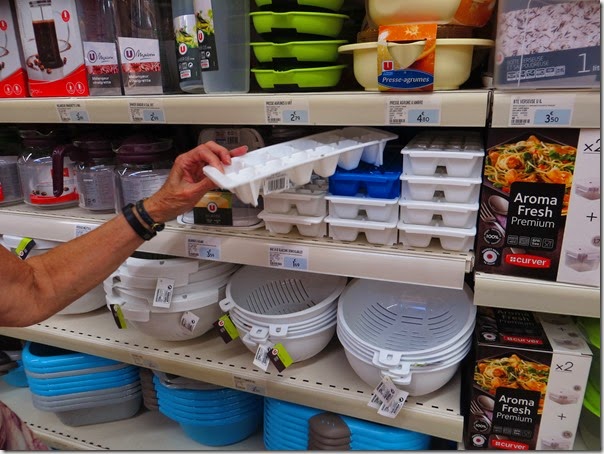 Just to show that she did eventually wander off to the housewares department. 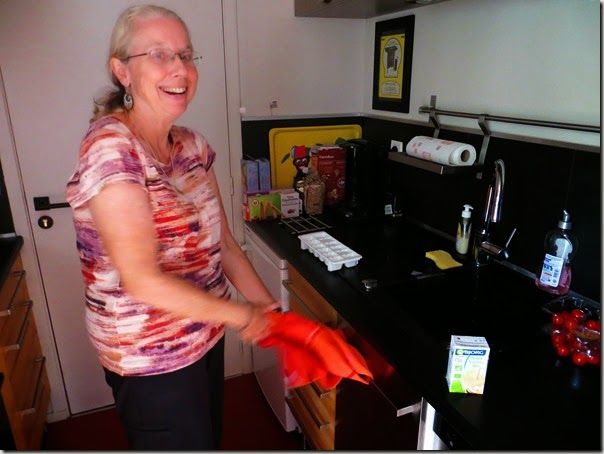 I remember there was a good story behind this big laugh but I’ll be darned if I can remember what it was. Love the photo though. 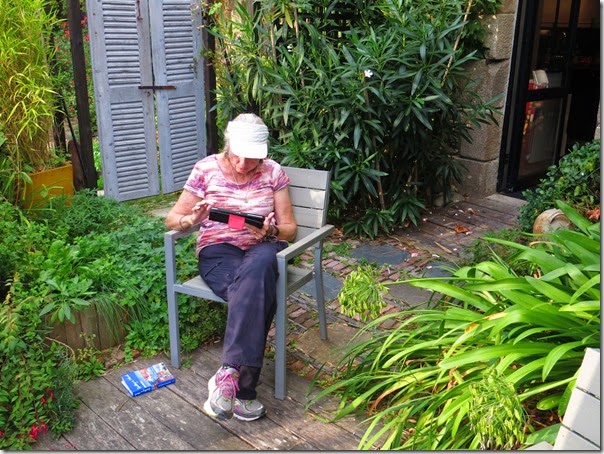 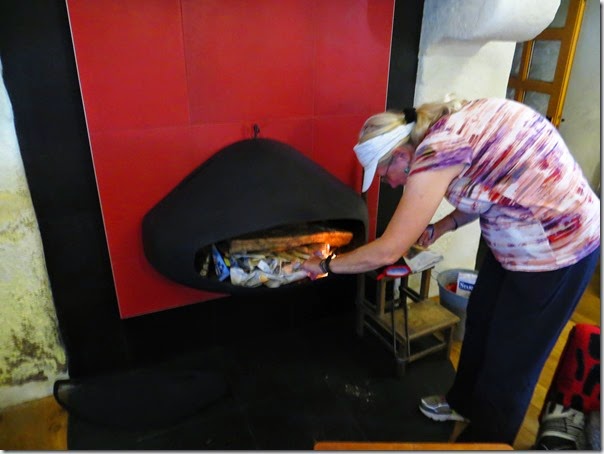 I build them, she lights them, we enjoy them. Life simply couldn’t be any better. 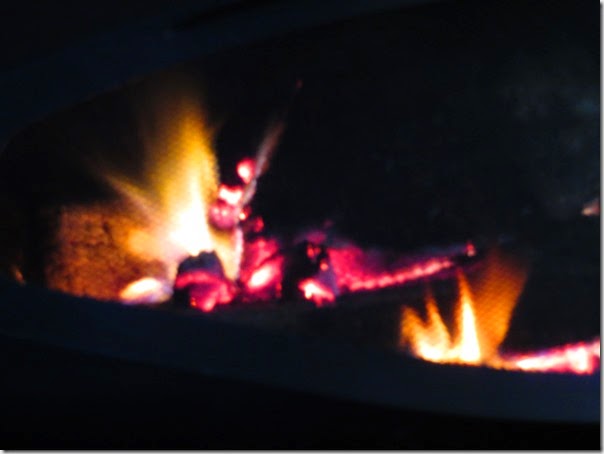 Night time in the town they call La Roche Derrien.  While the memories of what we did today blur with the onset of sleep, time moves relentlessly towards tomorrow and more wonderful adventures. May your day have been as awesome as ours.