Market Day in Josselin and More 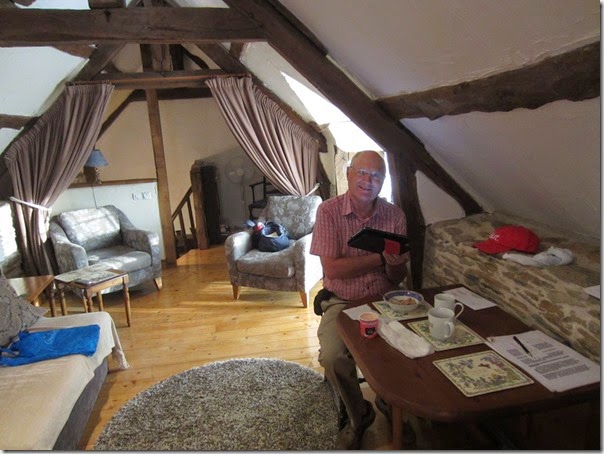 Definitely different than the usual. And to think, it’s our home for the week. All the timbers in this room are held together with wooden pegs. We can’t figure out what it was used for when it was originally built, or even what century that was. Maybe it was used to store feed for animals housed on the bottom floor, but it doesn't really matter, it has bushels of charm, which all we ask. 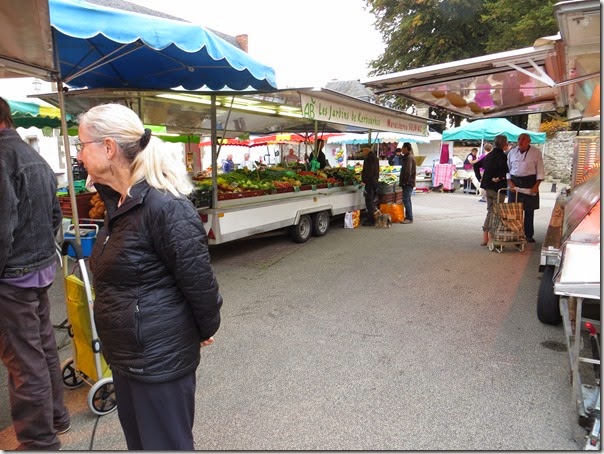 The town market was today. We had a great time checking out all the different vendors whose booths lined many streets. We have been to quite a few town market days during our travels over the years and we like ones like this the best. It is a smaller town, the market is quite spread out and the streets are not packed with shoppers. 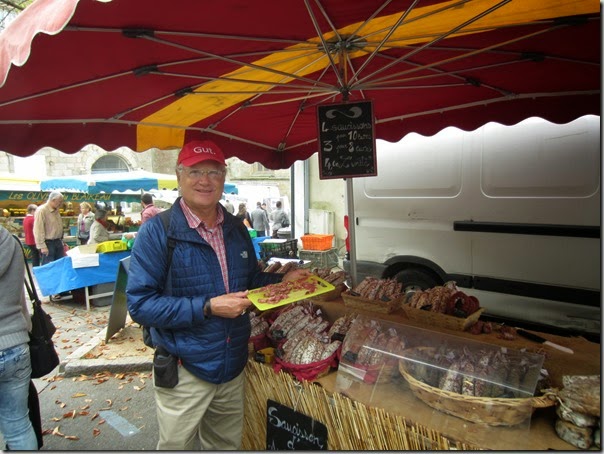 Young, handsome French saucisson seller hawking his sausages. The man at this booth didn’t speak English, we don’t speak French, but as Linda says, fingers and pointing are usually all you need. I ended up buying three different types of saucisson from him after sampling them. After much gesturing and unknown French words I realized I was such a good customer he wanted me to offer samples to passersby. As you can see, a little old French lady by the name of Linda captured my endeavors. There isn’t any way you can plan to do something like this. We love this Life and it is why we travel. 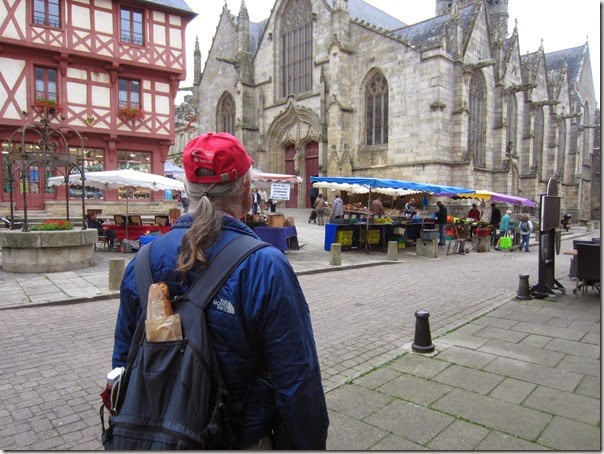 Another common sight on market days. A little old Frenchman leaving the market area carrying his baguette. I had to make up for what Linda thought was the wrong description of the saucisson seller in the previous photo. To me it looks more like a 60’s French hippie that got lost in in a time warp and doesn’t know where he is, especially since he hasn’t bitten off the end of his baguette, something no real  self respecting Parisian Frenchman would be caught dead not doing. Baffled Bob. 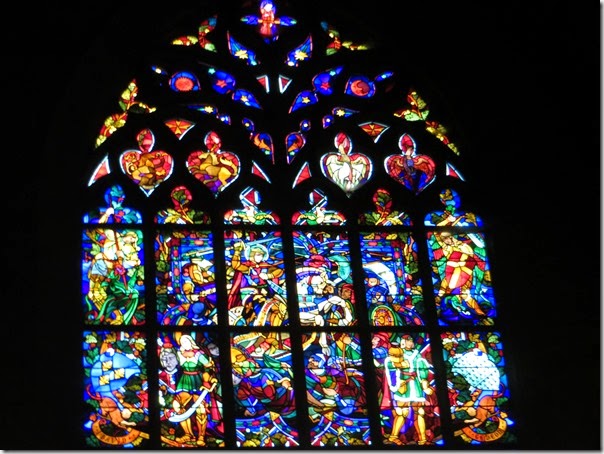 Basilica in town. Awesome stained glass windows. Josselin was another of those very important towns that time and change passed by. As they say, parts of the basilica were recently remodeled in1406, so it doesn’t have the look and charm it originally had when it was built, which was shortly after 1000. 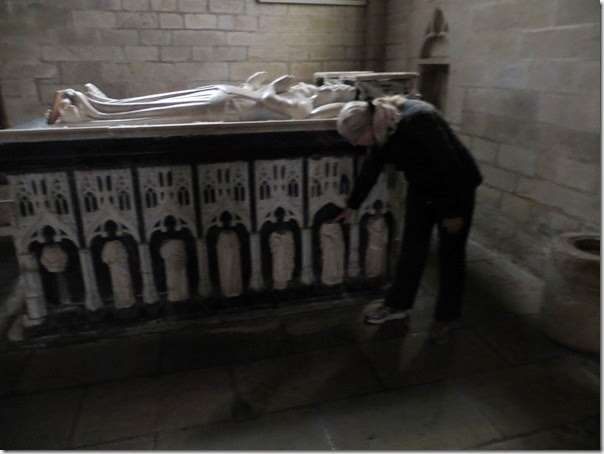 This Chapel held the tomb of a couple who were key to the town some 500 years ago. During the French Revolution the heads of the sculptures adorning the side of their tomb were decapitated, just like Louis XIV and Marie Antoinette. Linda, the ever interested in “dead guy” person, was fascinated with the headless mourners, wondering what happened to the heads. 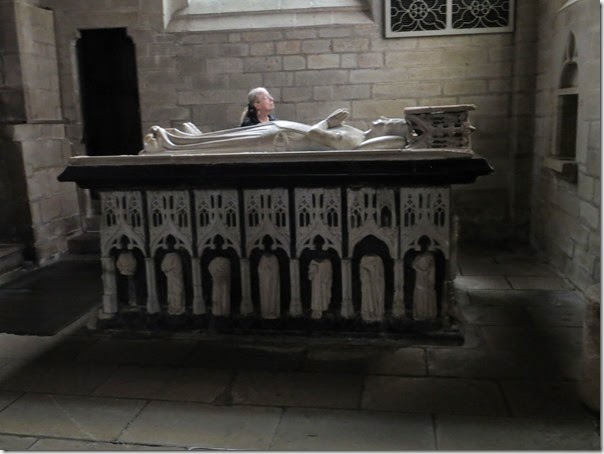 Would you believe it, it looks like one of those heads has magically appeared over the tomb. Quick, call the Vatican, it is a miracle, we need to have Saint Linda canonized immediately. Don’t laugh, it is highly likely that is just how many of the so called saints came into being. And to me, Linda is definitely a saint after putting up with me all these years. Canon-Fodder Bob. 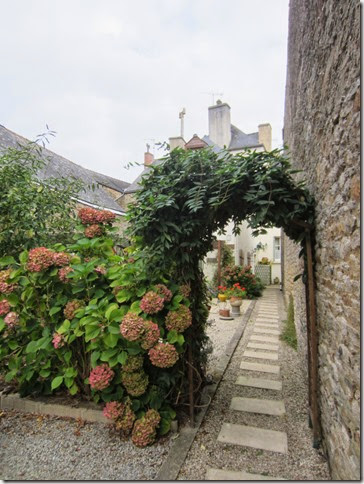 The stone walkway leads to the entrance of our gite. 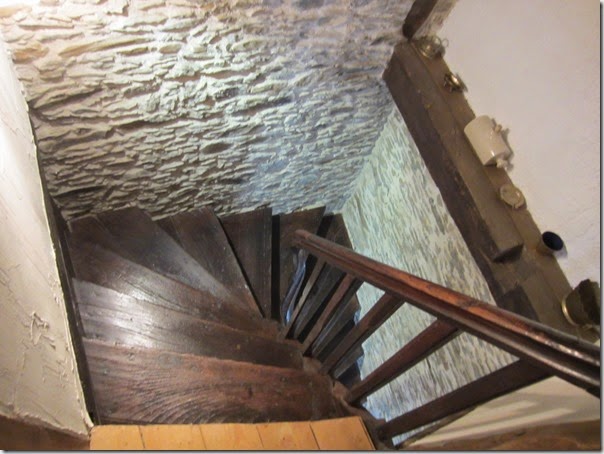 The comments about this gite say that if you are not agile and in good physical condition, this is not the place for you. This photo does not begin to convey how narrow, steep and tight these stairs are. And there are two sets of stairs to reach the upper kitchen and living area. 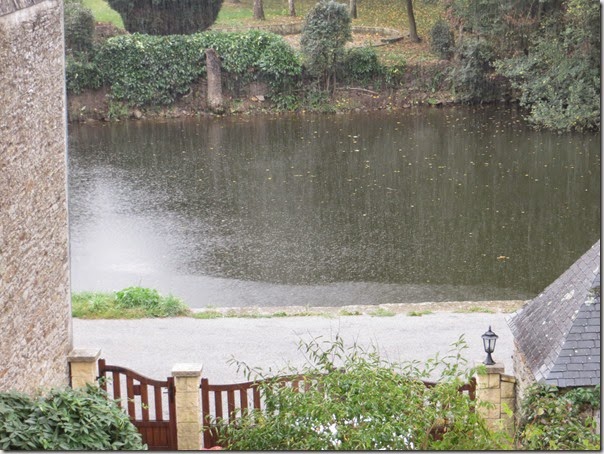 It is hard to see, but all afternoon it rained. 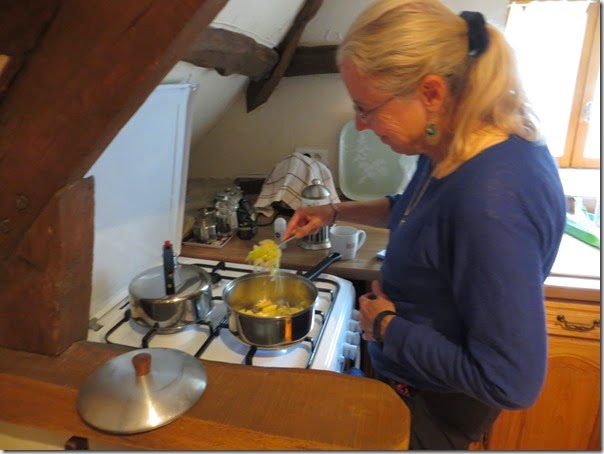 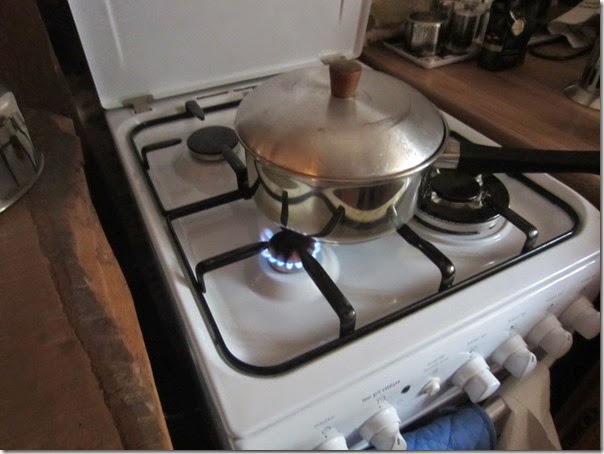 Low was not low enough to cook the soup as Linda wanted, but where there is a will there is a way. The smell of it cooking was enough to nearly drive me out of my mind. Talk about something that hit the spot, it was way beyond good. 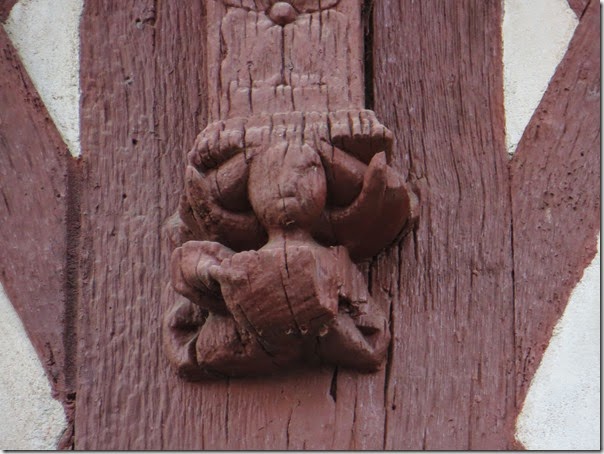 There are half timbered buildings throughout the town. This is a detail on one of them. We spent a good hour in the early evening just looking at buildings on several of the streets in town. It is what we like to do, and it helps us understand the the past life of the towns we are staying in. 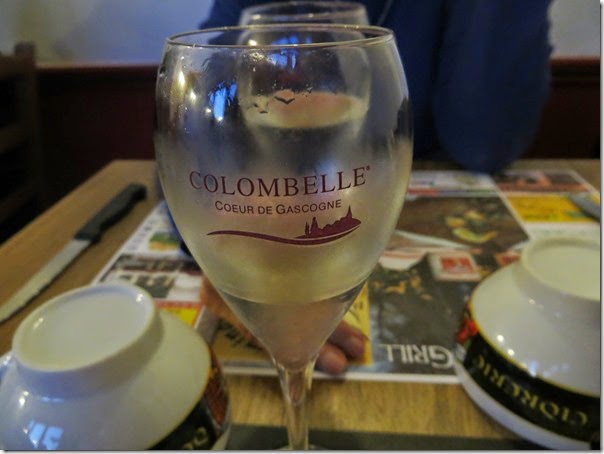 Dinner aperitif. Have to love how they come in a glass labeled with what they are. 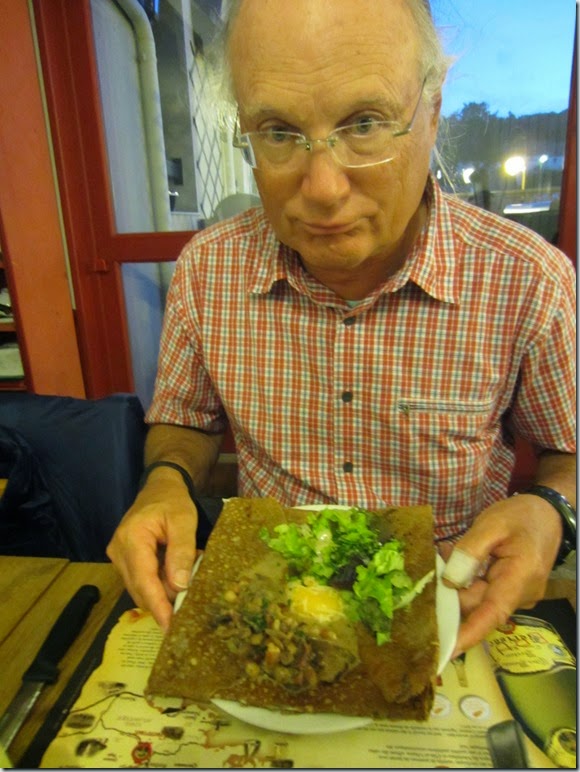 Sad Bob. Another French restaurant where virtually no English was spoken, though they did have English menus so Linda was happy. Smart Bob ordered from the blackboard that listed the daily specials, only in French of course. Egg yolk, I can’t stand looking at egg yolks. Linda came to my rescue, putting it on her plate. Thankful Bob. 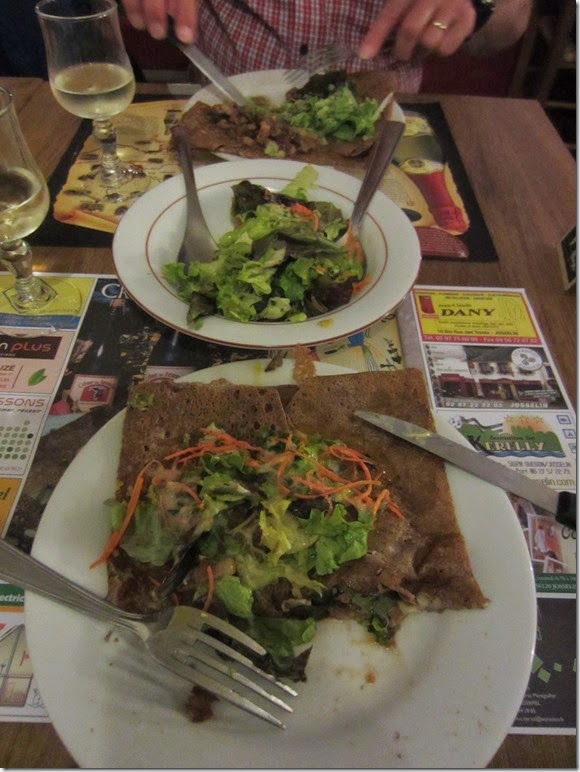 In the end we both agreed these were the best galettes we have had during our travels. Usually the cheese is only in the center, but these had cheese, and not just any cheese, totally awesome tasting cheese, all the way out into the corners. It was another case of not eating in the tourist area of town, even though it took us almost 45 minutes of walking around town to find it. The really good stuff doesn’t come easy. 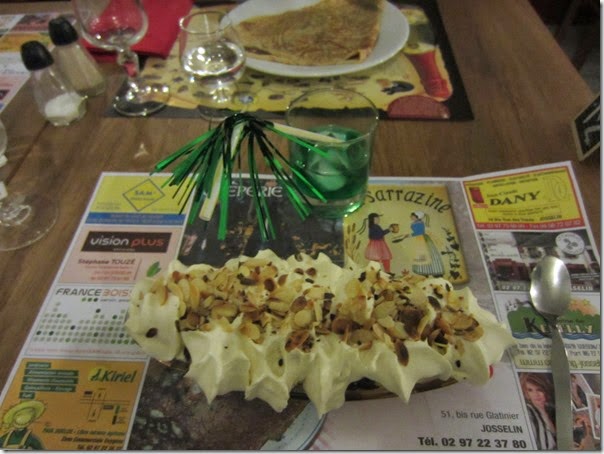 Linda’s banana split. It had plenty of bananas so she was a very happy girl. Will we go back to the same place to morrow night? Highly unlikely as we really like to not eat in the same place twice. Besides, there may be another place in town that is even better. Hint: we have several in mind based on what we saw looking for this one. 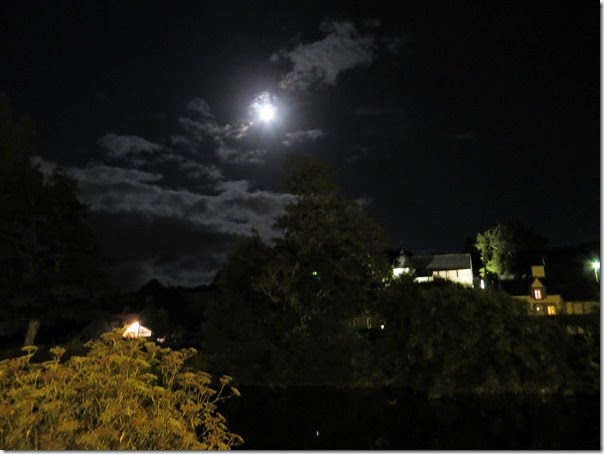 It was long after sunset when we returned to our gite. Bob and Linda, Living the Good Life.