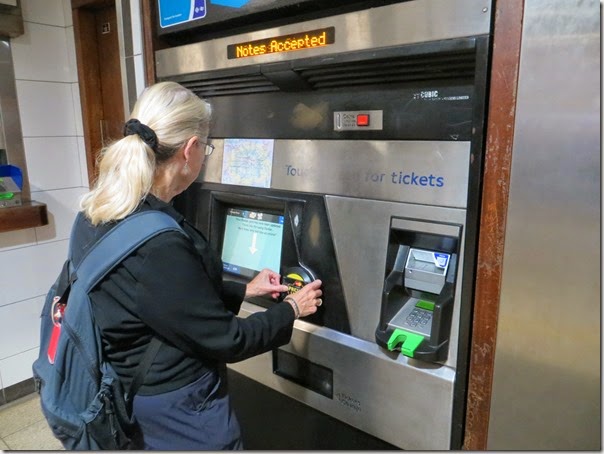 Nothing to it. Linda topping off her Oyster card. We wanted to add enough to get us around the next two days, then out to Heathrow on Monday morning and still have enough to take at least the first trip the next time we are in London. That meant finding a machine that took notes. Another reason why the next time we come to Europe we will have a chip and pin card, it will make things like this much easier as all machines take cards. 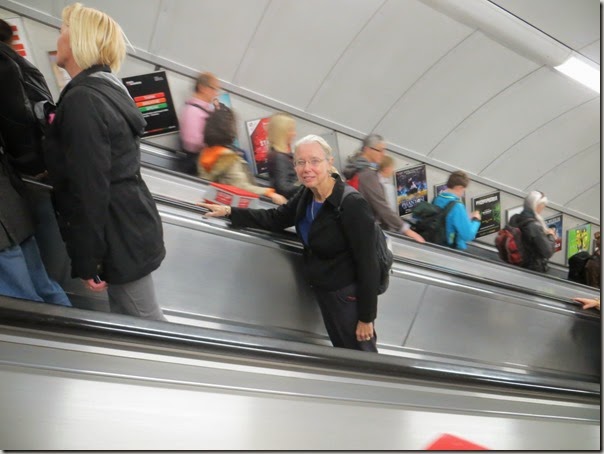 .
I can’t tell you why we really like some cities, London and Berlin for example and dislike others such as Paris. Maybe it just feeling more comfortable, or maybe it is the fact those are the countries where our genes come from. Whatever it is, we are having a great time in London and really don’t want our time here to end even though we are on the go from early morning to late at night. Could it be that as we get older we get better?. 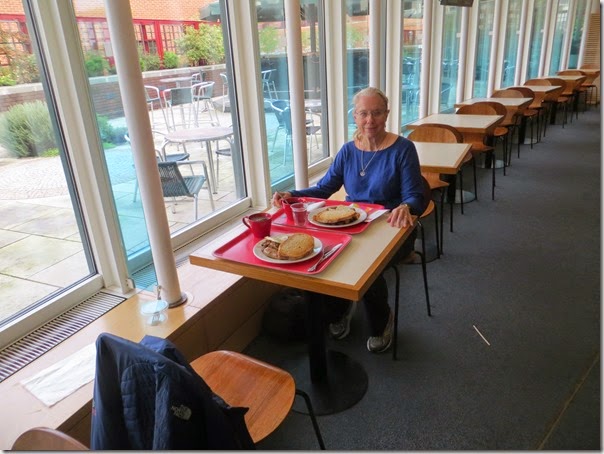 Full English breakfast again this morning, but it where we ate that was most interesting. 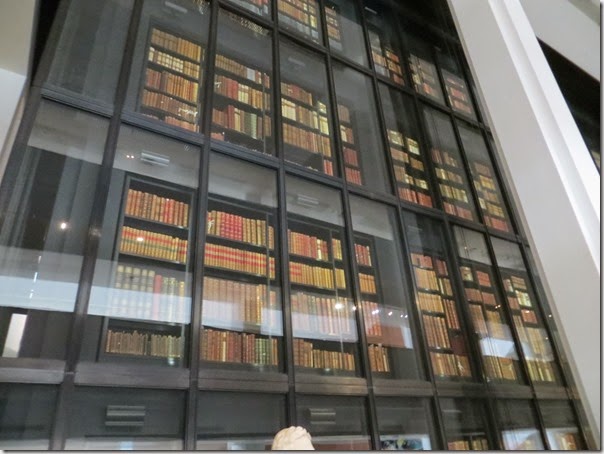 Books, more books than many libraries have pages. All we did was look at the different public displays at the British Library, but we spent almost three hours looking. Tell me you wouldn’t spend time looking at the original words for “A Hard Days Night” that John Lennon wrote on the back of a birthday card his son, Julian, had received. Or maybe the drawings in Fleming’s notebook when he first noticed penicillin mold inhibited the growth of bacteria. Or maybe the famous upside down airmail stamp. Not everyone is into things like this, but Linda and I definitely are. 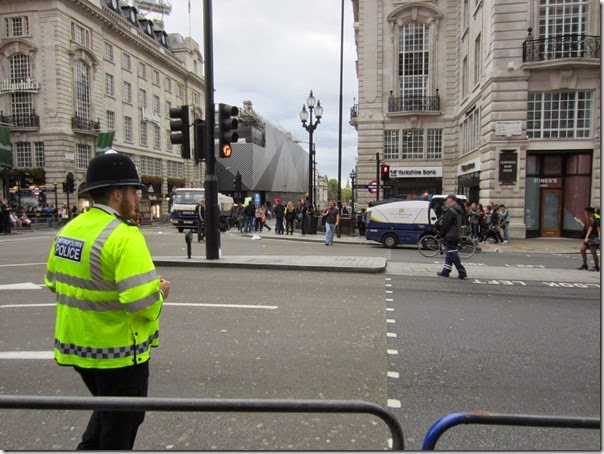 A major trade union march was held in central London this afternoon. The police were out at all the intersections and the street cleaners were sweeping up the mess left behind. 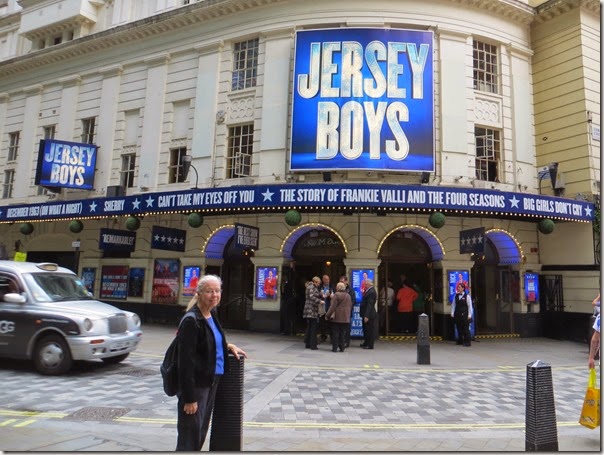 Our matinee play today. Jersey Boys, the story of Frankie Valli and the Four Seasons. 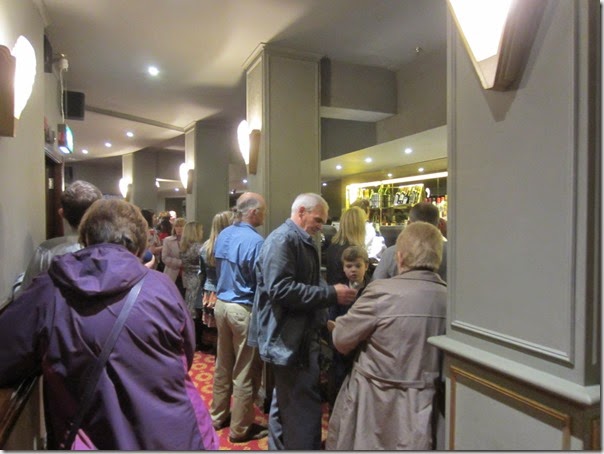 Linda’s spouse getting her a gin and tonic at one of the bars in the theater as she waited for the doors to open. 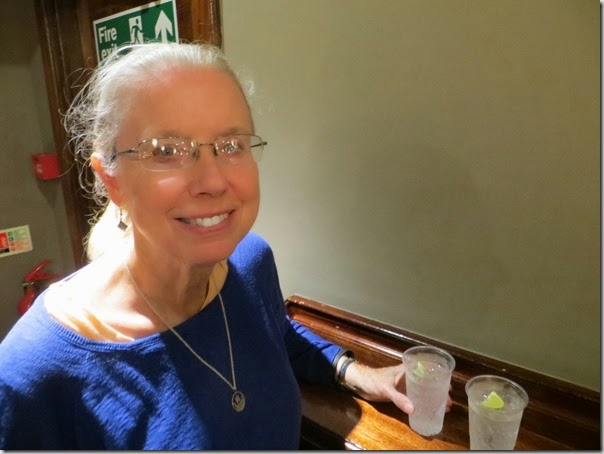 How the experienced theater goer waits for the doors to the seating area to open. 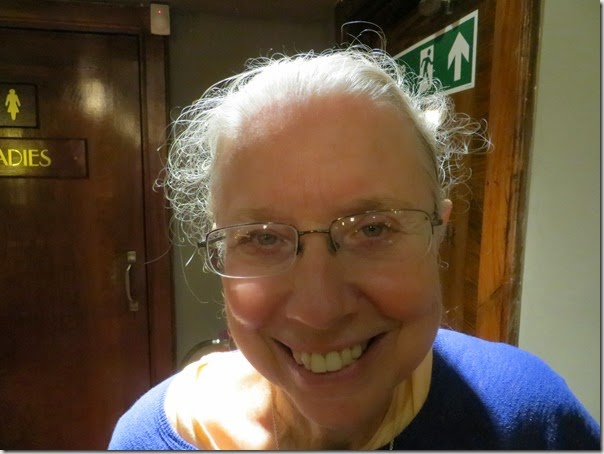 The wind blowing throw the walkways in the Underground does this to a girls hair as you can see on Miss Never a Hair Out of Place. 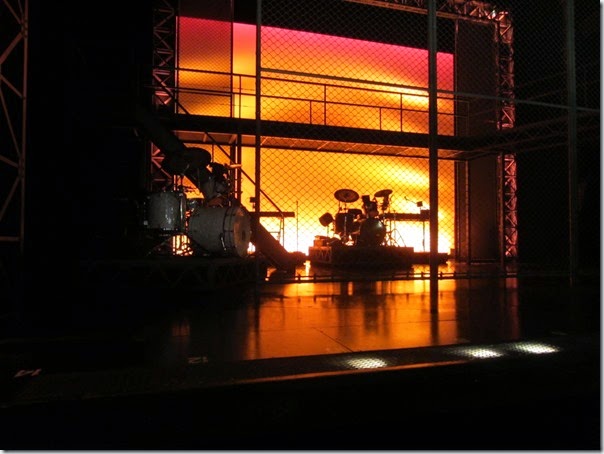 Another, no photos allowed performance. Linda managed to take this one as we were leaving the theater. Don't ask me how we got them, because it was once again just luck, but we had seats in the third row just left of center. It really doesn’t get much better than that. And the performance was totally beyond awesome. How do we get so lucky? 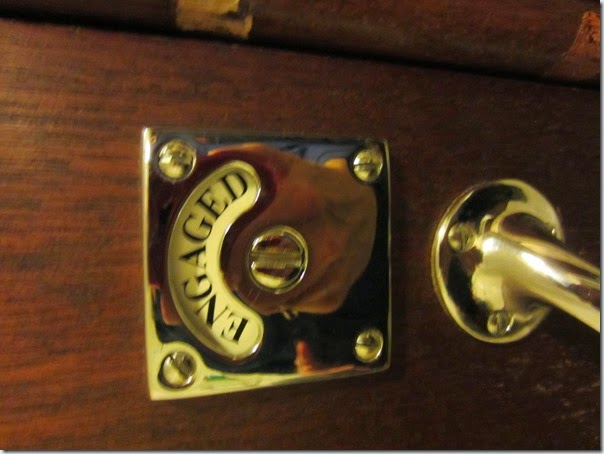 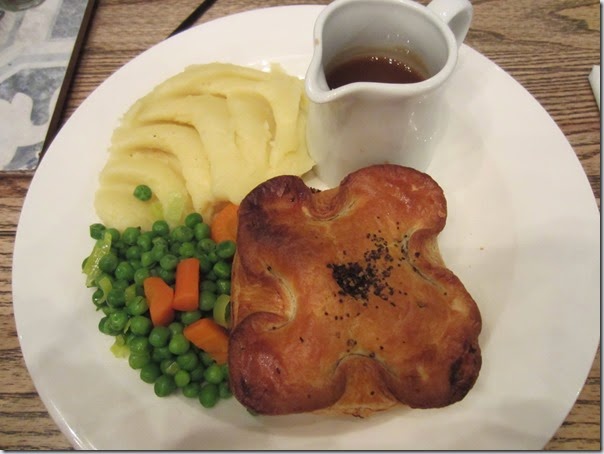 Linda’s dinner, meat pie in a pub in the theater district. 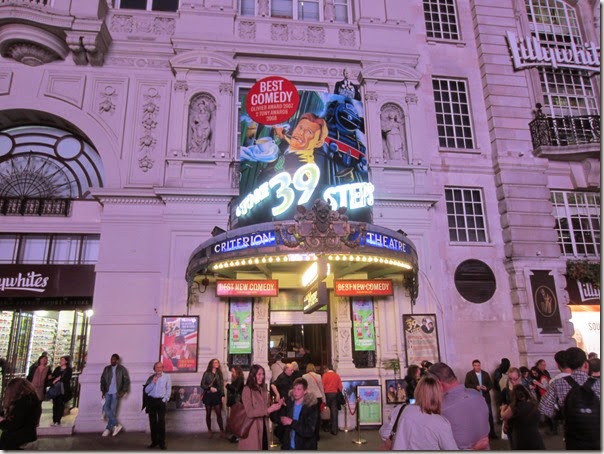 The evening performance of 39 Steps we attended was at a theater located right on Piccadilly Circus. 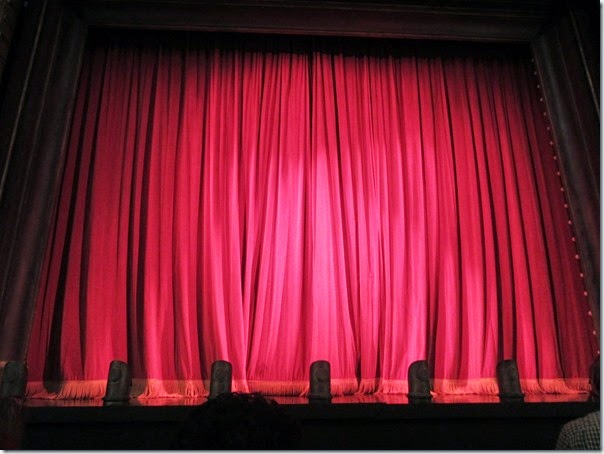 Center seats, third row back. With seats like this happening at every play I am beginning to think it has more to do with knowledge and experience than luck. Not really, but ever once in a while we need to believe in ourselves. 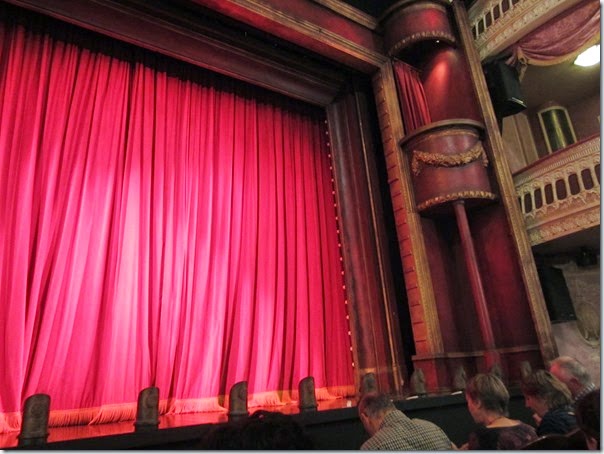 The theater was built in 1874 and still reflects those times. The stage opening was the narrowest of any of the theaters we have attended, and as a great touch, the footlights are mounted at the front of the stage. We had a wonderful time with some great laughs, and what more could a theater goer want. Two and a half days, five awesome performances, and we are looking forward to two more plays tomorrow. Bob and Linda, Living Life Large in London.
Posted by Bob and Linda at 4:23 PM