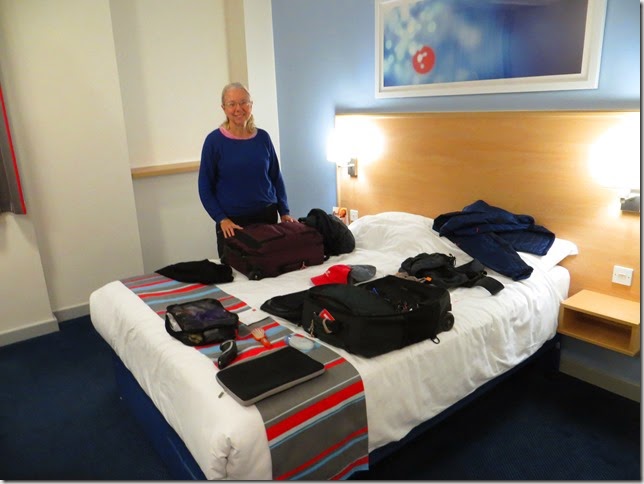 My bags are packed, I'm ready to go, even if you're so slow. I hate it when you make me wait, but the dawn is breaking this London morn, the tube is running, and being late is your norm.

Already I'm ticked off at you, so don't try to kiss me and say sorry, just get your bag packed so we can go. Cause the plane is leaving, and don't you know, I'll be on it, even if alone I go.

So, kiss me and smile for me, but I'm walking out this door and you'll follow now, if on our plane you want to go.

(Not my best effort, but still, better to try and miss than not try at all, especially when it so true. Like I always tell Linda, “After all, you did agree to the for better or worse part.” And this one is so bad I don’t even have to apologize the late John Denver.) 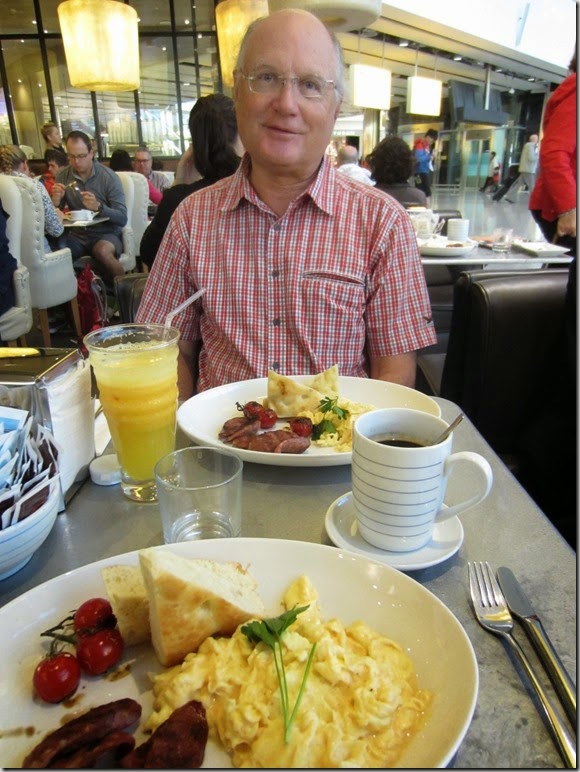 As you can see, I did make it out the door and to Heathrow with my darling(?) spouse. The Piccadilly line train we took was absolutely packed, but fortunately not when we got on, so we had seats. It was about 50 minutes to Heathrow, then we breezed through security and found a café in our terminal where we enjoyed  a leisurely last breakfast. 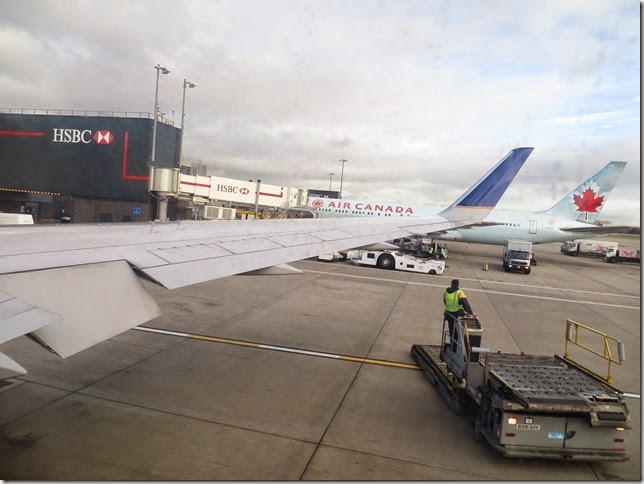 Just to prove that even though I may “dawdle”, I do know how to get to the plane on time. A former life spent catching planes has not been forgotten.  Heathrow is an amazing place, with travelers and planes from many strange and distant lands. Then there corporate planes such as the one seen out our plane’s window. That red maple leaf company has to be the world’s largest daypack manufacture as you see daypacks with their maple leaf logo proudly displayed everywhere in Europe. 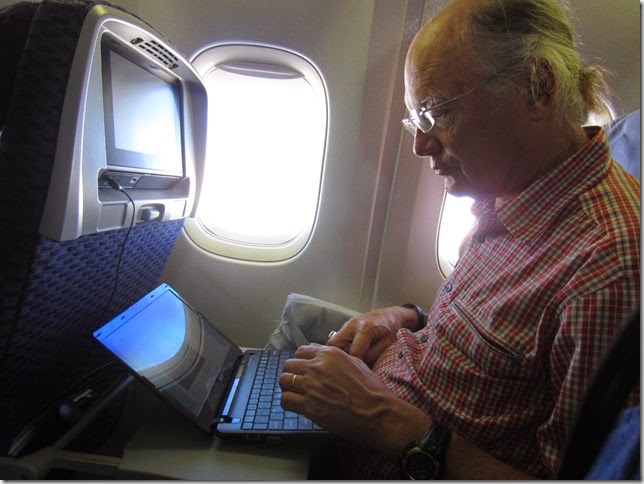 The flight time was over 10 hours, time I put to good use by writing the previous day’s blog post. The problem was, writing the blog brought back memories of “The Play That Went Wrong”, and Linda kept looking over at me wondering what I was laughing about, so I told her. That got us both talking about it and laughing together. Three young men who got their start doing improv comedy upstairs in a pub after working all day, write and act in a play that is a hit in a West End theater. One of those, if you build a better mousetrap, the world will beat a path to your door, stories. 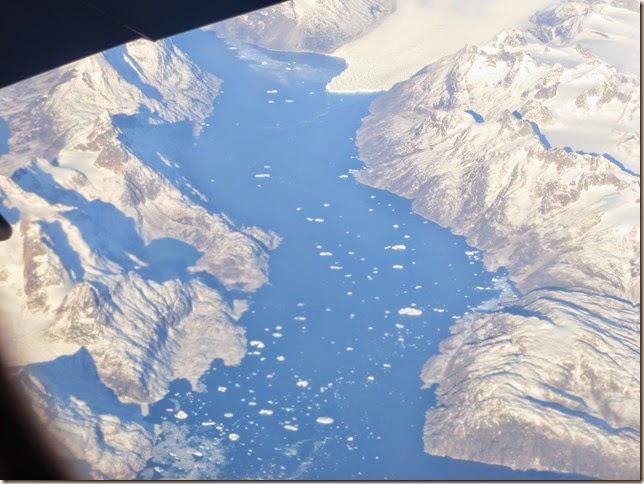 From seven miles above Greenland we could see icebergs calving off glaciers. 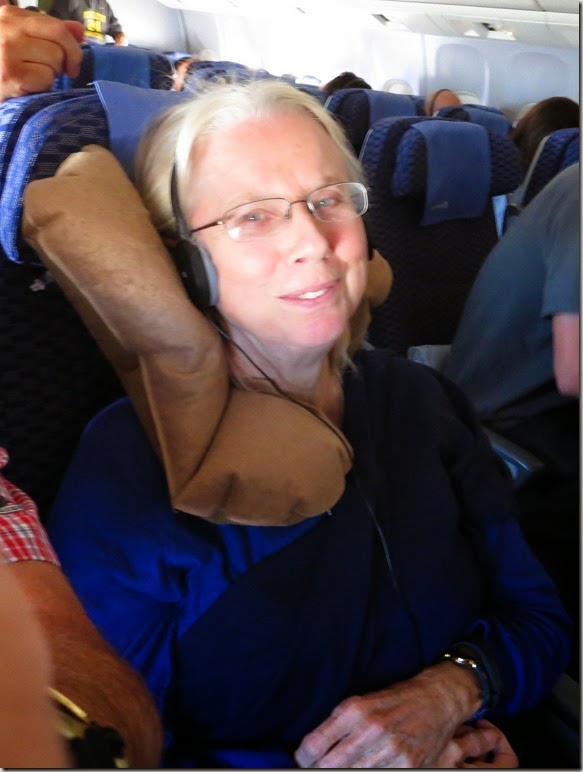 There is more to this than meets the eye. First off, when Linda tried to blow up her cushion she had more than a little difficulty. Then when she did finally get it inflated , she couldn’t figure out how to use it. Later we both got up the use the restroom and when I returned I somehow got her end of the seatbelt. When she sat down she tried to pick up the pillow, but because it was trapped under her seatbelt which was now fastened to the other end of my seatbelt, it wouldn’t budge.

We finally determined what the problem was and got the seatbelts ends to the right person. Shortly afterwards she tried to pick up her daypack which was on the floor under the seat in front of us. The problem was it too was stuck. The real problem was that somehow or other in returning to my seat I had stuck my right foot, she being on my left, through one of the arm straps of her daypack and she was yanking my foot in a direction feet and legs don’t normally go. Ah, the joys of long distance plane flights. 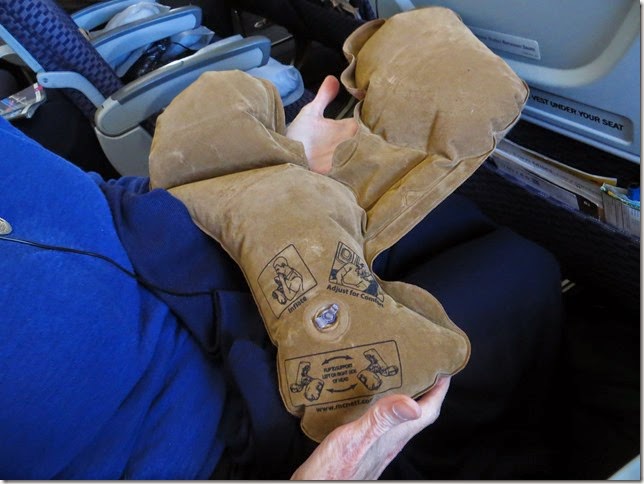 Don’t think for a second I was mocking Linda when I said she could figure out how to use this pillow. There were directions right on it and after looking at them, twisting the pillow this way and that without success, I handed it back to her, saying “Good luck.” Smart woman that she is, it wasn’t long before she was giving me that, “I’m smarter than you” look, and justifiably so. Smart Bob for marrying such a smart girl. 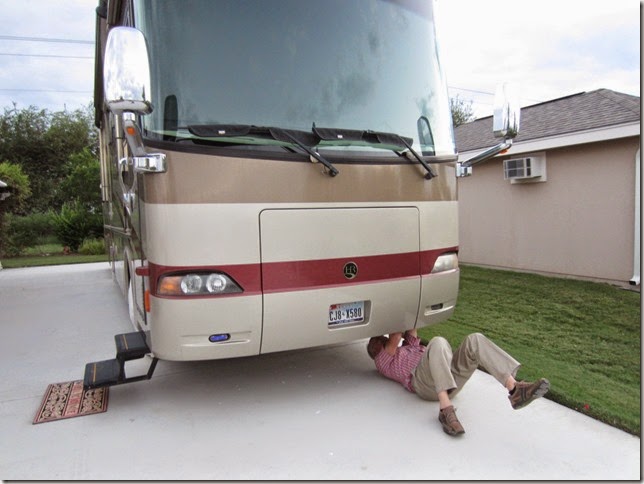 Home, but where the heck did I put the key? 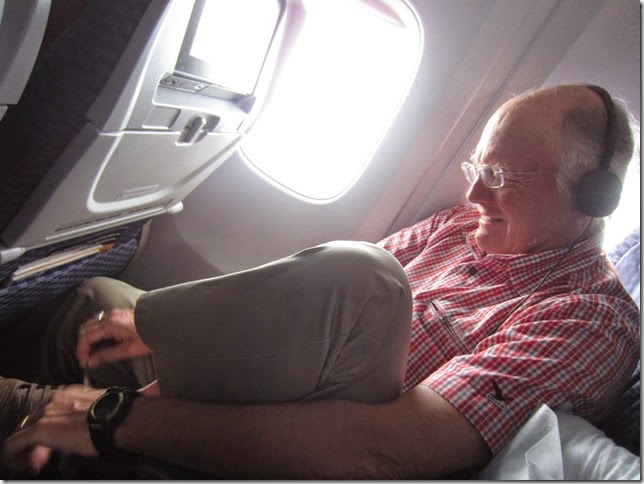 Wanted to save this one until the end. I take my shoes off on the plane. That’s not the problem. Putting them back on isn’t either as I can just slip my feet into them. But tying the laces, oh man, talk about contorting.  Those three months just seemed to fly by, but the wonderful memories will stay with us for years to come. I hope you enjoyed reading about our travels as much as I enjoyed writing about them. But both pale in comparison the to the joy Linda and I experienced in actually doing those things and the many, more there was no time to write about.

The next post will be back on the regular Because We Can website, www.because-we-can.net, though it may be a day or two in coming.