A Lazy Day, And About Time 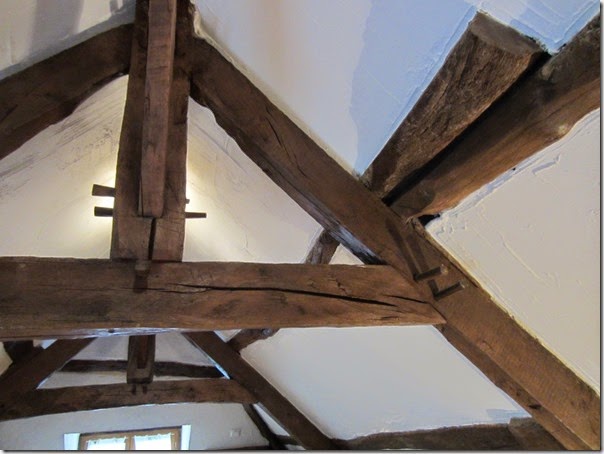 It was a rainy day which we turned in to a lazy day, and having been on the go every day for the last two and a half months, it was about time.  While we may not have been so lazy as to spend the day contemplating our navels,  we did contemplate the intricate use of natural beams and wooden pegs in the ceiling of our gite. 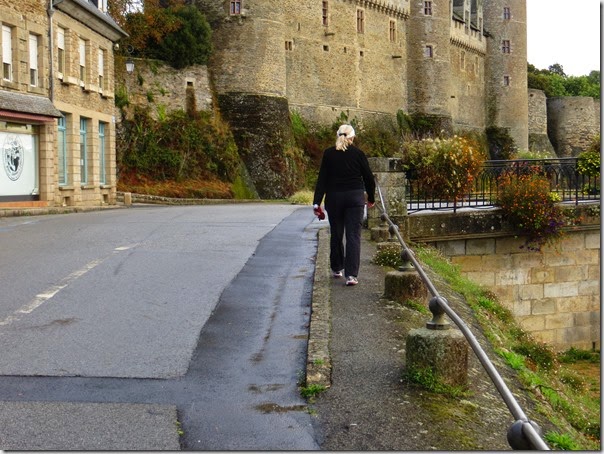 It was almost 2 o’clock before the rain stopped and patches of blue began to appear overhead. It was just a couple of hundred feet before this spot that a car, a large puddle of water and Linda walking alongside the road all met at the same moment. I laughed as I related to Linda how the men of Victorian days always walked on the street side of their ladies to prevent them from being splashed by passing carriages, which is what  I should have been doing. For some reason Linda didn’t think it was at all funny. It brought to mind the saying, Mad as a wet hen, but I didn’t say it. Smart Bob. 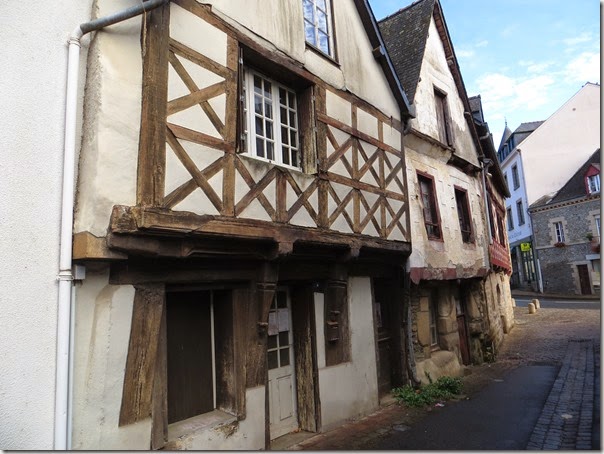 Old buildings in the medieval section of town. 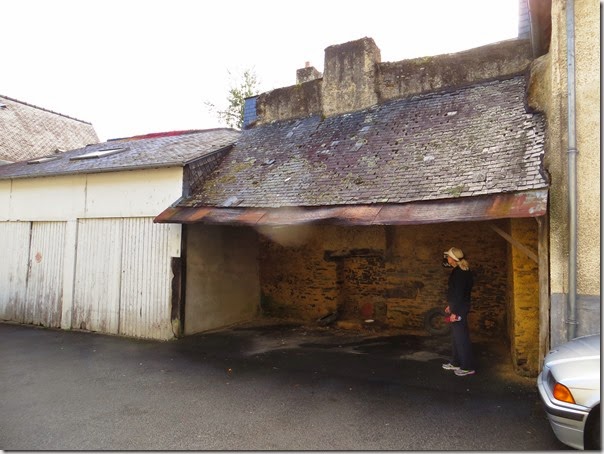 We weren’t sure what it once was, but Linda sure liked it. It had a large fireplace in it so maybe it was used by the ladies of yesteryear to dry their wet petticoats after a carriage splashed them, something I didn’t mention to Linda. 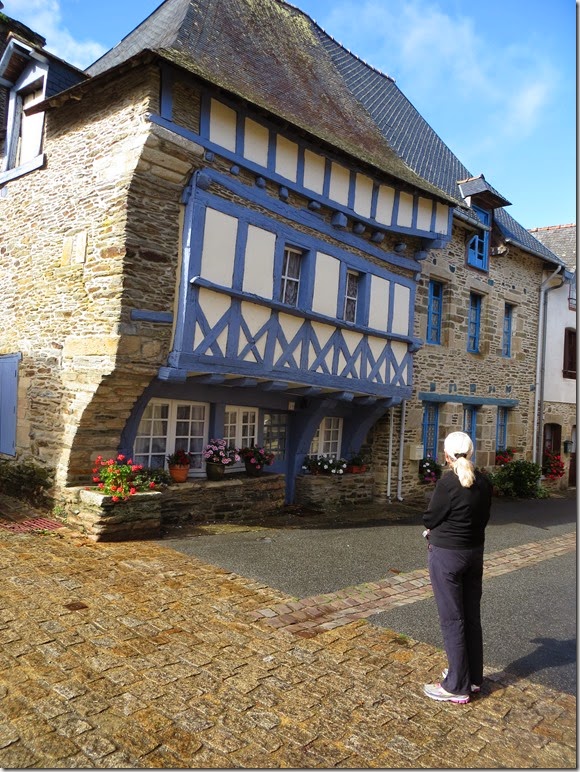 It may not have been very straight, but it sure was very solid, having been here for many centuries. 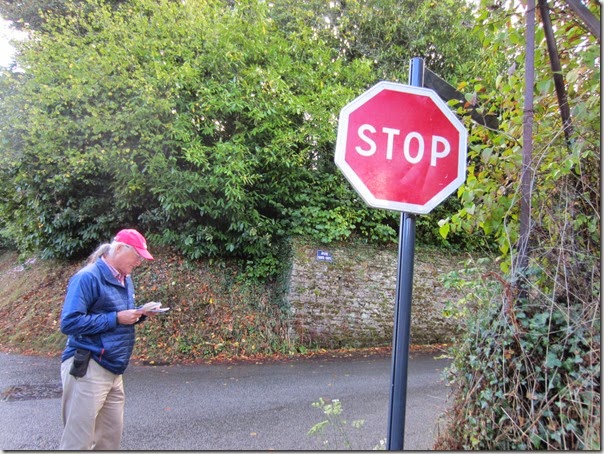 In a medieval town none of the streets are straight and they end when they end. It was so bad that Linda’s personal tour guide even got lost. But he had an excuse, as you can see, the  streets are so crooked even the posts for the stop signs are off center. 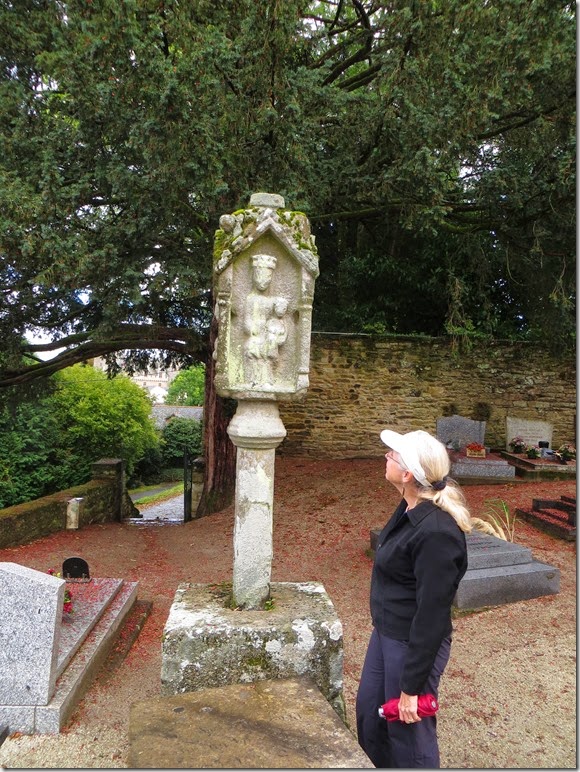 Monument in the cemetery dating from the 1400’s. Parts of the nearby church dated from 1059. 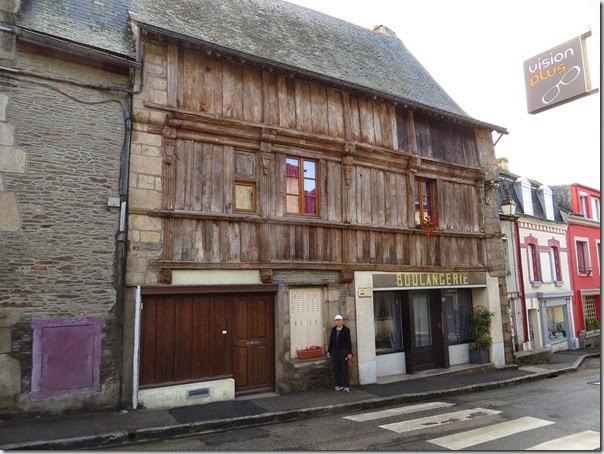 An all wood plank house. Built in 1602 it is one of only several buildings of this construction still in existence in Brittany as buildings from this time were normally of half timber construction. 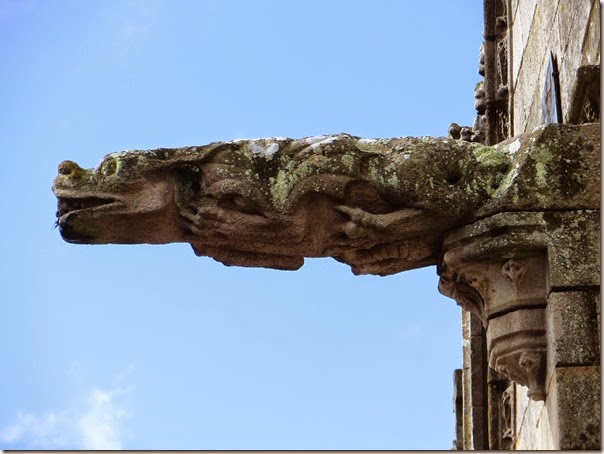 Linda’s favorite gargoyle on the Basilica. 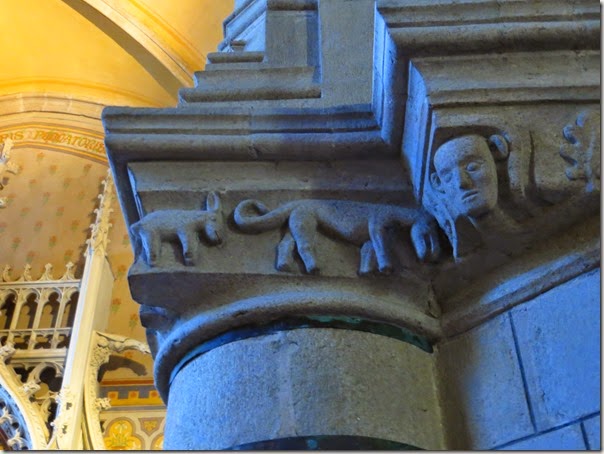 Linda’s favorite stone carving inside the Basilica. It is the only carving of a dog inside a church in Brittany. 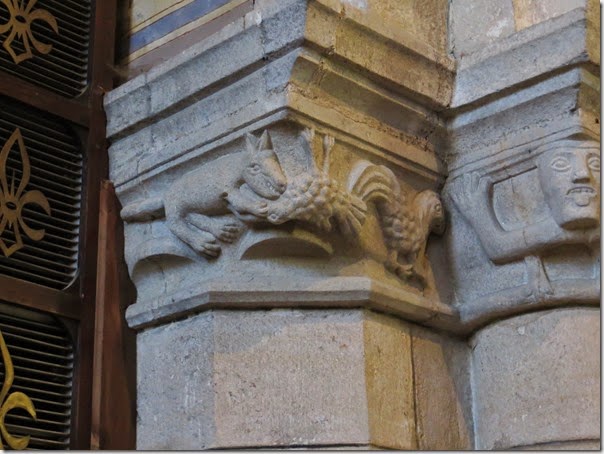 Linda’s least favorite stone carving inside the Basilica. It is a fox raiding a hen house. 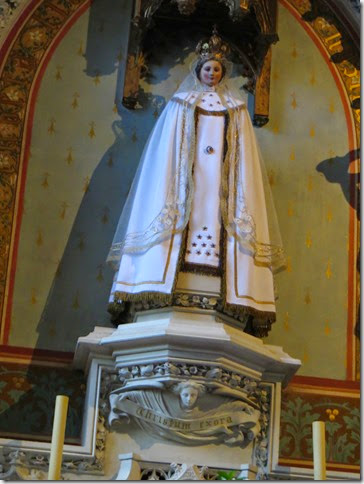 Our Lady of the Brambles. Found discarded in some brambles by a peasant centuries ago, she performed a miraculous healing of a blind person. 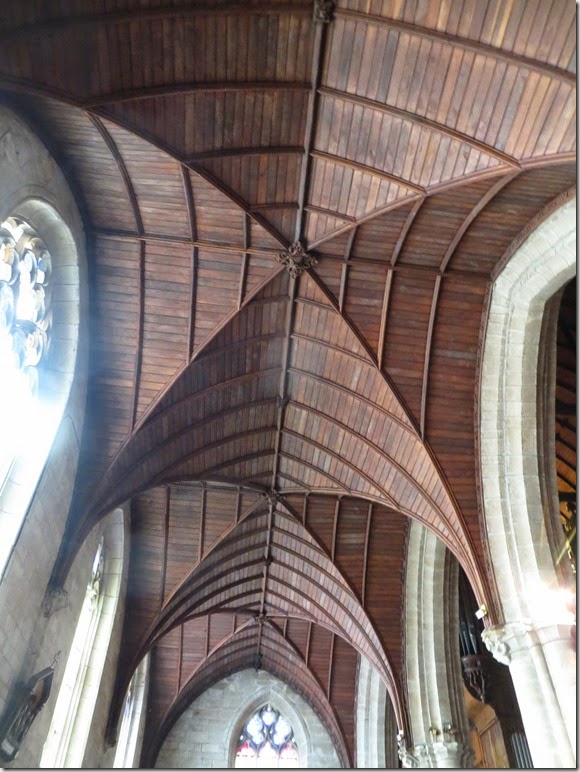 The beautiful chestnut, wooden vaulted ceiling of the basilica. This photo doesn’t begin to do it justice. 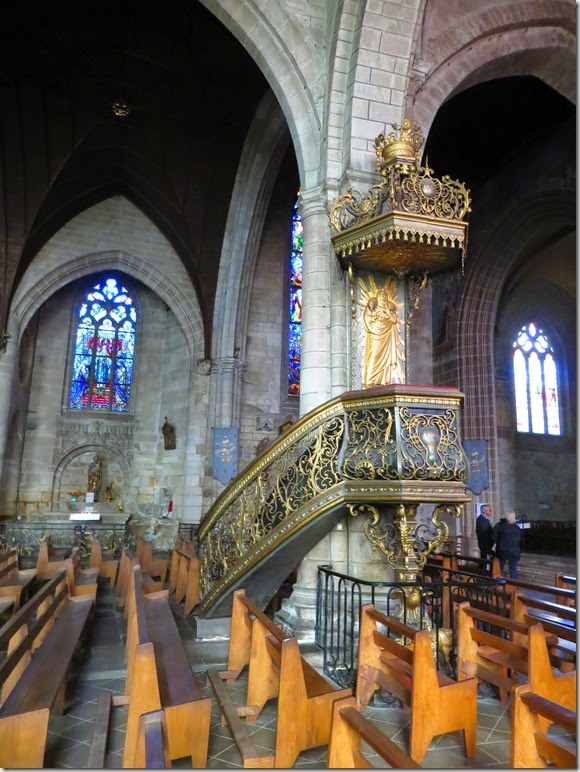 The absolutely stunning hand wrought iron pulpit. Another of those you have to see it to believe it objects. 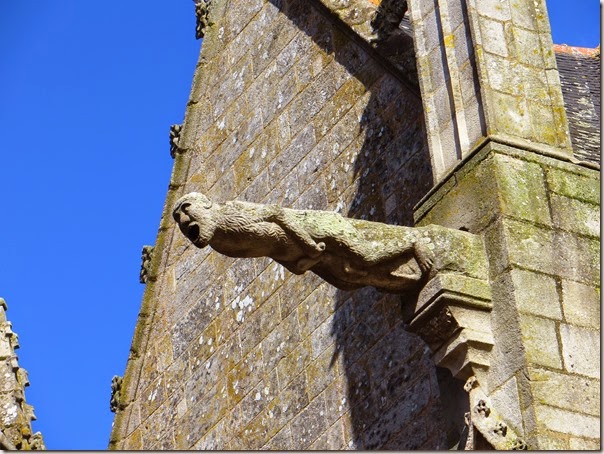 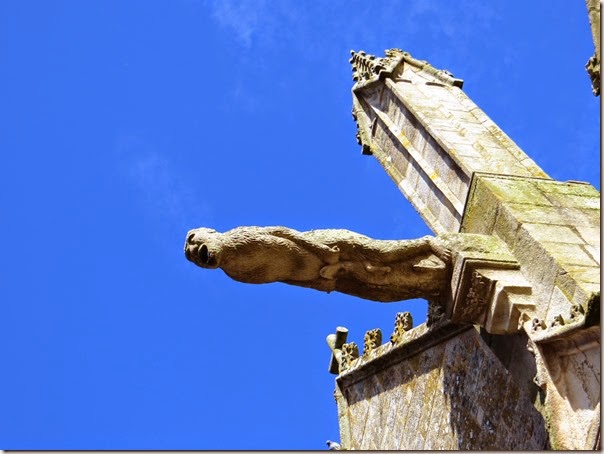 So cool it deserves a different view. 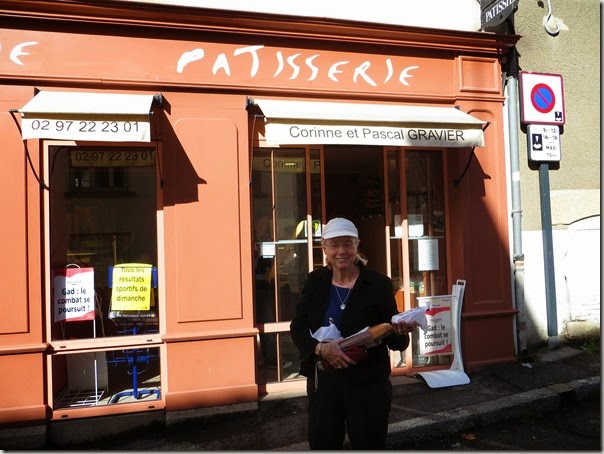 Beautiful young French girl leaving a boulangerie with a baguette. 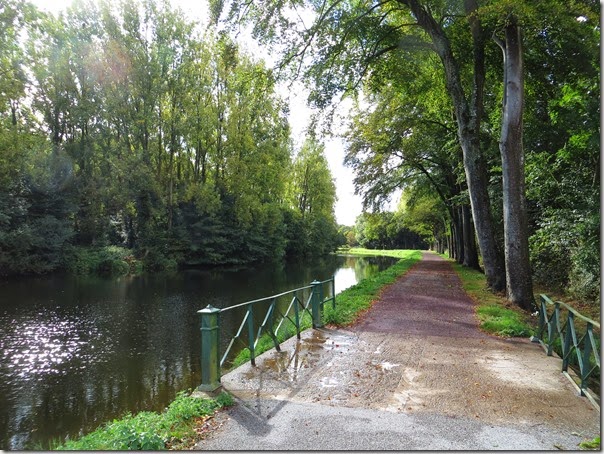 If you walk out the gate to our gite and look to the right, this is what you see. 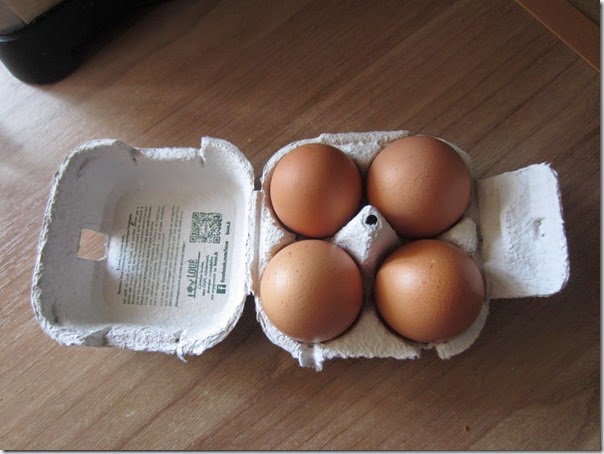 This one is for Linda. She is totally fascinated with the way they sell things over here. The don’t refrigerate eggs and you can buy them in in cartons of as few as four, which is what she did.

Bob and Linda, having more and more fun every day we travel, even on days we don’t travel far.