London Day One, Michael Flatley, Lord of the Dance 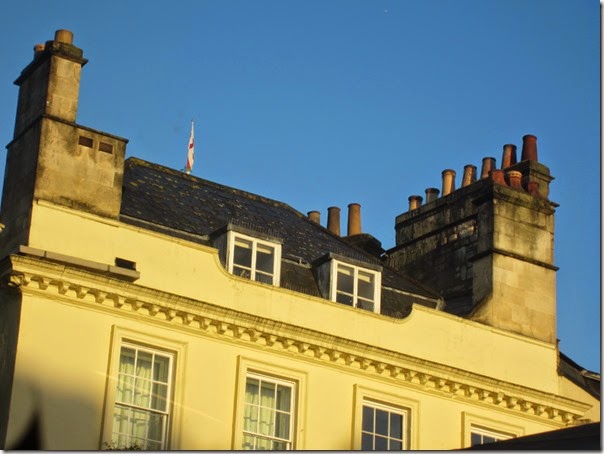 So just how did we know for sure we were leaving Bath this morning? Easy, we merely had to look up and see the blue sky with no clouds as we sat at our breakfast table. 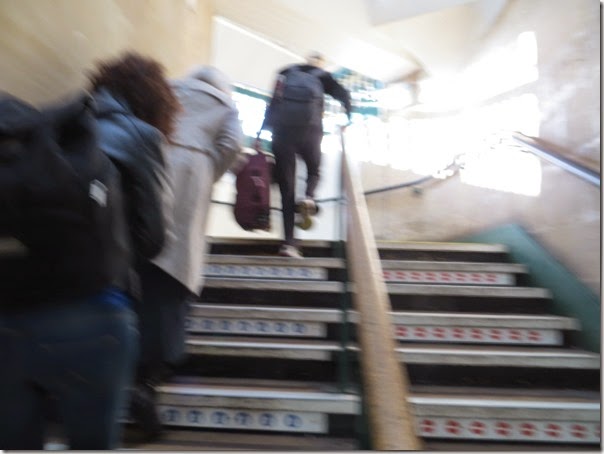 Linda really wasn’t moving so fast that she was a blur, but she was moving so fast I had to literally whip out the camera to take this photo. Over here the stairs and corridors often follow the way traffic moves which is on the opposite side we use in the US. This time she actually obeyed the signs on the steps and stayed to the left. Good Linda. 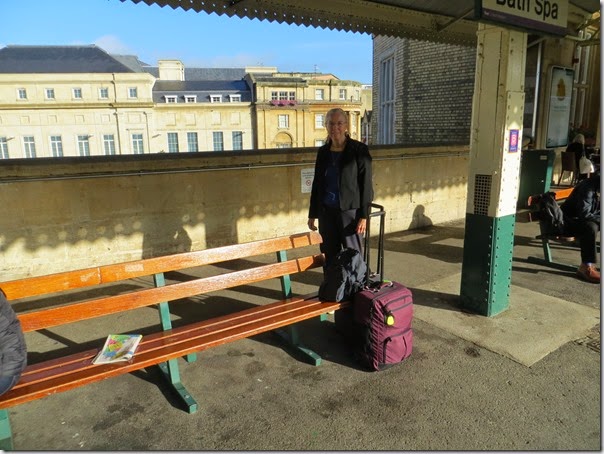 Linda always sits when she is waiting for a train. Linda is not sitting as she waits for our train to London. Linda has standards. Linda does not allow the sun to shine in her eyes. Since Linda wouldn’t sit with the sun in her eyes I sat on the bench. I wear a hat. The sun does shine in my eyes. Linda was not a happy camper. 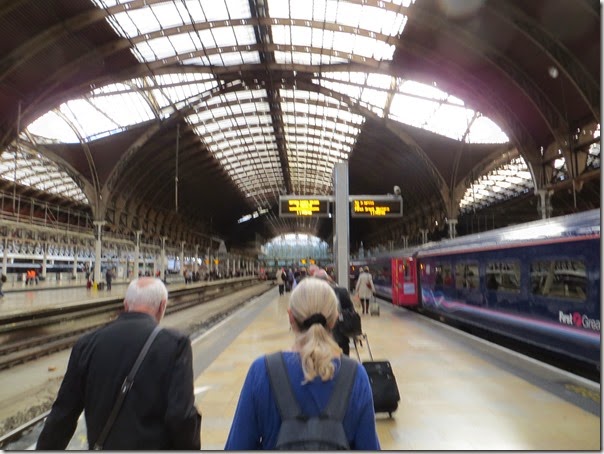 London Paddington Station. Once again our car was almost as far from the station as it could be. We certainly got our exercise walking from the train to the Underground platform where we got on a Circle Line train to Notting Hill where we transferred to the Central Line for the trip the station nearest our hotel near the theater district. 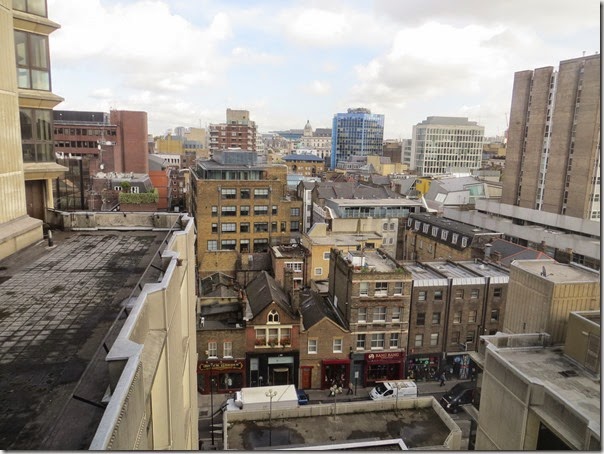 Seventh floor room, with War Horse playing a half block away. Not a bad place to stay. We were still up in the air as to which play to see tonight, but when Linda found out Michael Flatley, he of Riverdance fame, was dancing in this evening’s performance of Lord of the Dance, it was off to the Palladium Theater to see what tickets were available. We usually buy our tickets at the TKTS booth on Leicester Square as they have discount tickets, but for this production there was no discount, so we went to the theater box office and were able to buy tickets. 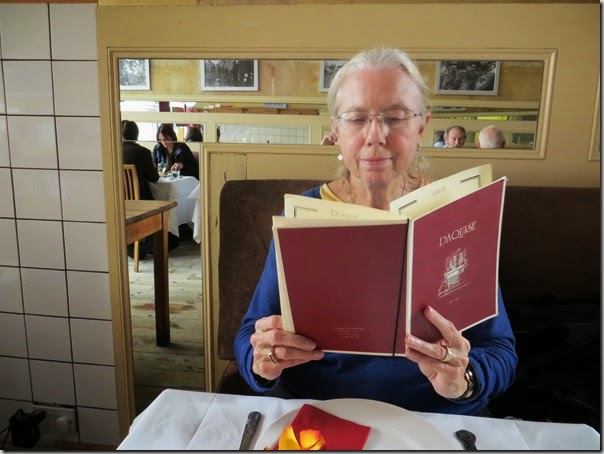 Then it off to eat. All this running around was done via the Underground as we have Oyster cards which makes travel a snap. Or I should say a tap, as in tap and go. Linda decided we would eat at the Polish restaurant in South Kensington we like, so it was off to there. Arriving, Linda realized she had a problem. Polish restaurant, Polish food, what to order? 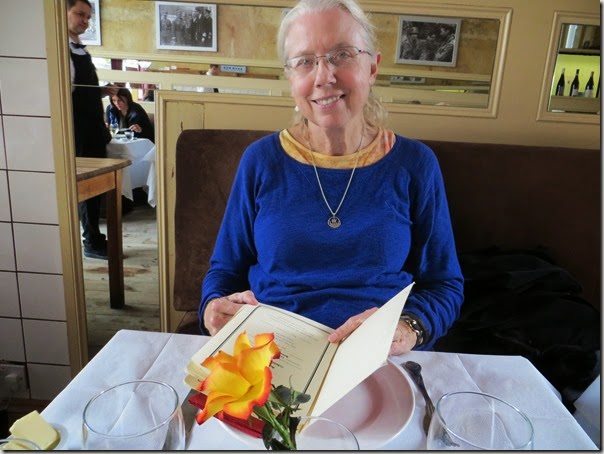 Happy girl, she has made her decision. 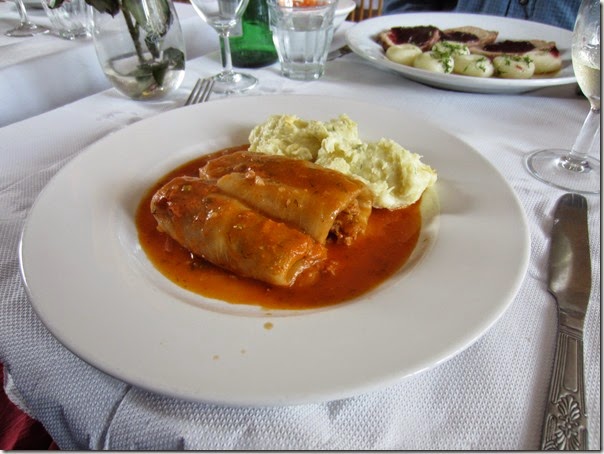 Polish Restaurant, Polish cabbage rolls and Polish mashed potatoes for Linda, Pork medallions with plum sauce and potato dumplings for me. Another totally awesome meal. Our luck continues. We had debated about what to eat, but decided we would make this our meal for the day as it was already mid-afternoon and with the performance beginning at 7:30 in a 2400 seat theater, we would have to eat a very early dinner tonight. That meant we needed to fill up, which called for dessert. It was tough eating it, but in the end we managed to leave the plate clean. Yes, we shared a dessert, but that was better than no dessert. Stuffed but Happy Linda and Bob. 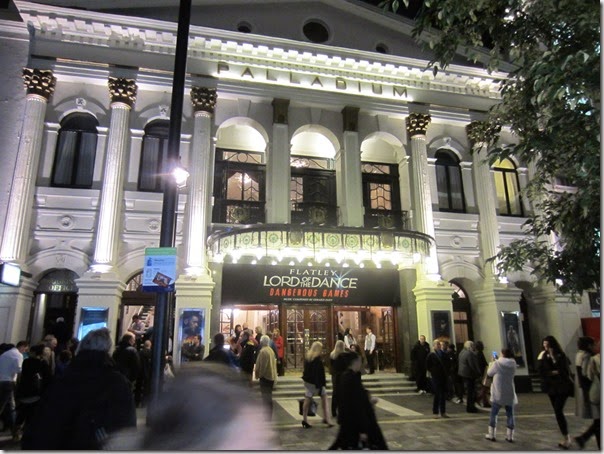 We arrived at the theater about 40 minutes before the performance was to begin and 10 minutes before you could be seated. In the lobby the line snaked back towards the entrance. Noticing the bar area was less crowded we made our way over to it, then walked up next to were the line began, but off to the side with lots of room around us. You got to do what you got to do and Linda doesn’t like being crowded. Needless to say that when the doors opened we were among the first people through the door, which allowed Linda to sit until the performance began. Happy Linda. 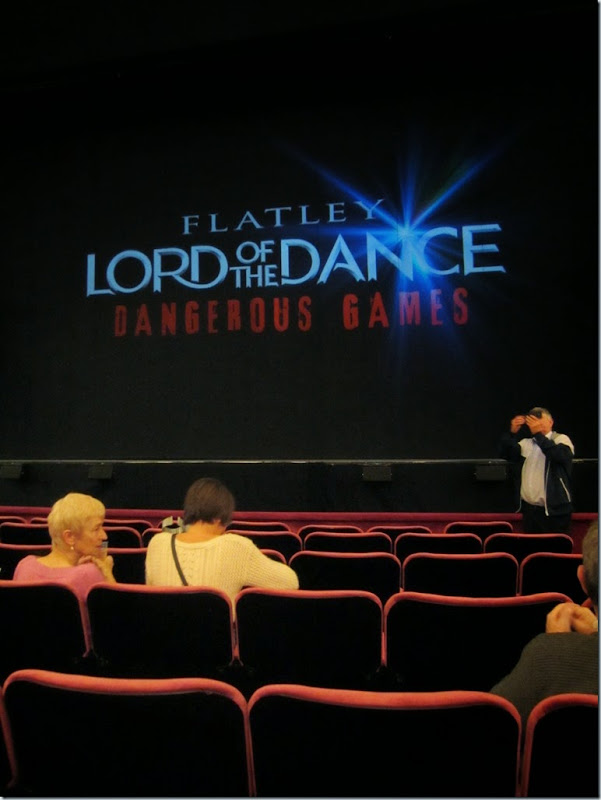 We were right up front, seventh row from the stage and seven seats to the side from stage center. Someone had turned in these tickets just before we got to the box office. Then it got even better. I got to talking to the lady whose seat was next to mine and told her how we lucked into our seats and asked when she had bought her ticket. She said, “Oh, I didn’t, I work for him.” Him being Michael Flatley. From then on I asked questions, she talked and I listened. Another of those, just when you think it can’t get any better it does, moments. 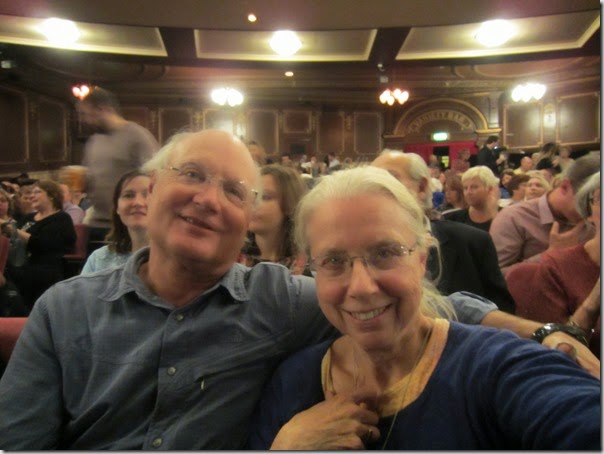 They say you don’t have to dress up to attend the theater in London and I didn’t, but I sure did have an awesome looking woman on my arm. 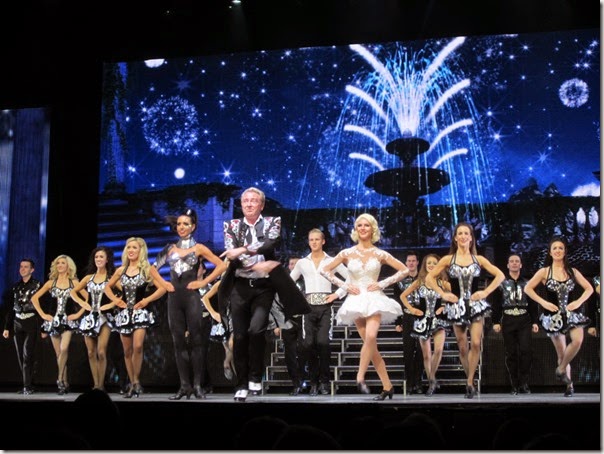 You weren’t supposed to take photos so you’ll have to take my word for it that Michael Flatley was there. Wait, what’s this? Isn’t it amazing what I find when I download photos from Linda’s camera? Michael Flatley, maybe not exactly what he was in his prime, but he made an appearance at the end of the show and that was more than good enough. Especially when he was only some 30 feet from us.

There are a lot of people who say some day I’ll…, and I hope they do. Still, I like our way, which is saying today we….