Getting to Antarctica isn't as easy as going to the local grocery store. 4 AM and were getting on the bus to go to the Santiago Airport the flight the Punta Arenas. But enough about that, as you can see I was able to post. It's slow going to upload the pictures, but it can be done so maybe I'll be able to post most days. If not, then that's what it shall be. 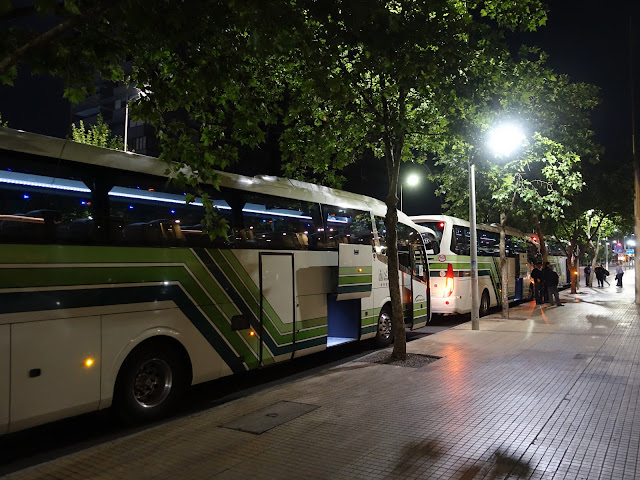 The further south we flew over Patagonia the prettier the land became. The large white areas are lowlands that are covered with clouds. The two bright white mountains, actually volcanoes, are snow-covered. You can see the cone at the top of the upper one. 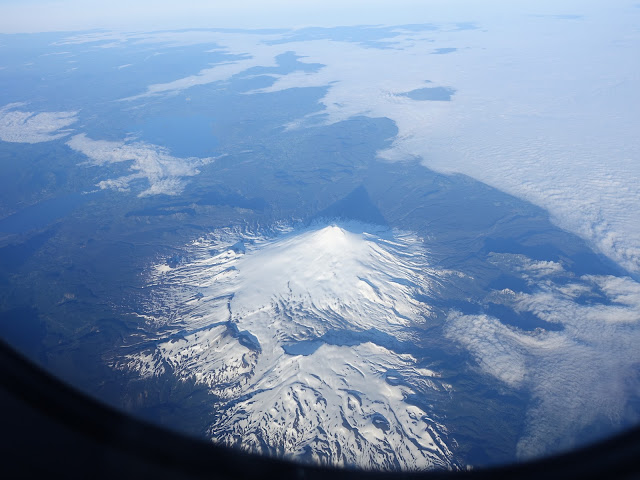 Somewhat further south we flew over what is known as the northern ice-field. Here is where the glaciers have flowed down the valleys gouging out the land in this unique pattern. 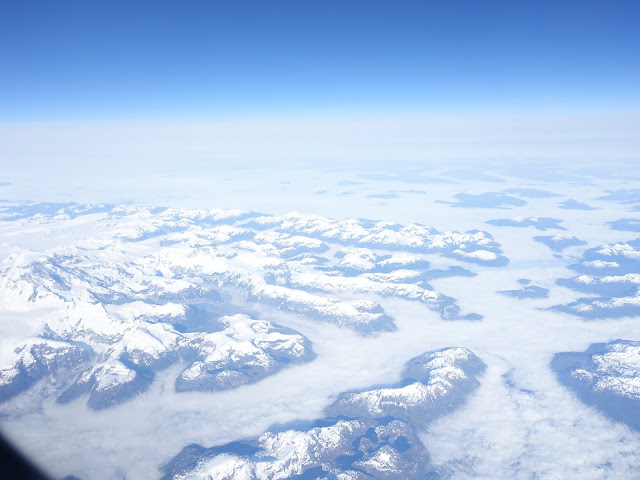 Foot of a glacier ending in a lake. All the land at the top of the photo is ice that is thousands of feet thick. 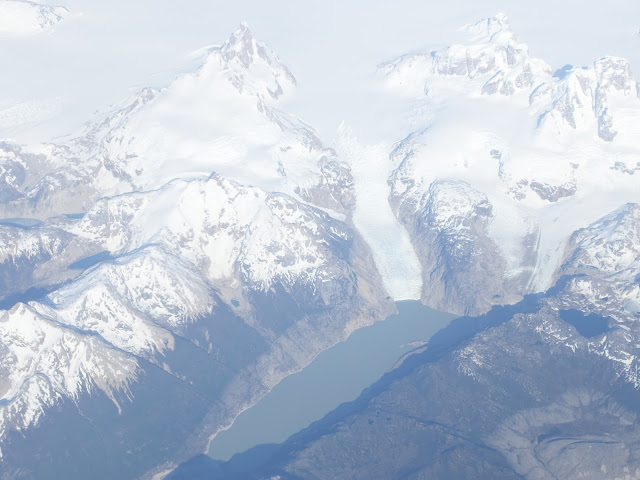 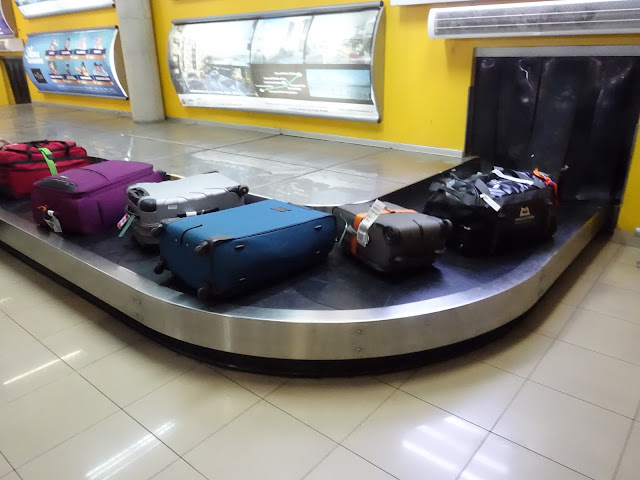 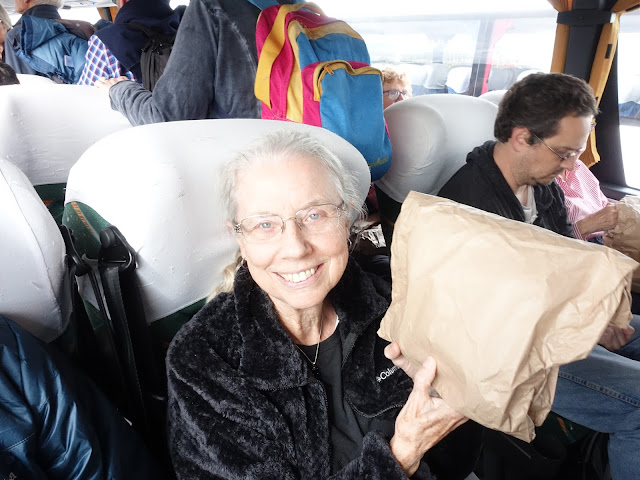 With time before we would board our ship, we were bused around town visiting various sites. They had told us that we would have a box lunch. It was actually a pretty good lunch, but it sure wasn't in a box. 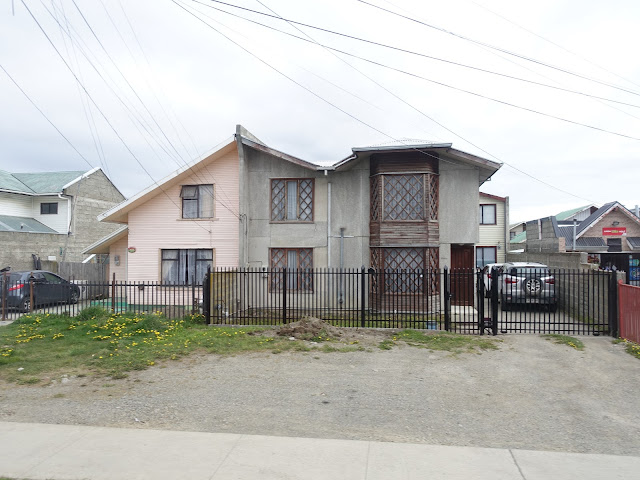 It is extremely expensive to live down here since it is extremely difficult to get here. A house like this would sell for approximately $450,000. 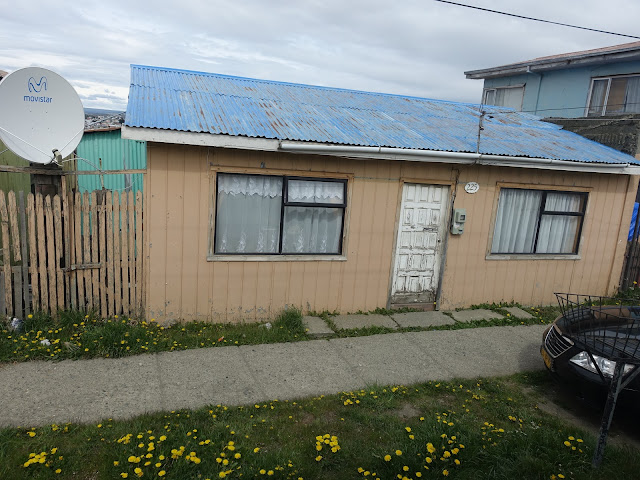 This is one of the original type houses that were built here. There are two rooms one on each side of the center hall and across the back of the house is the kitchen. That's the entire house. You will note that there is blue roof on this house and many of the houses have different colored roofs. You also might notice that the house to the right is blue this house is a tan and the one behind is a green. Our guide said that the different colors of houses came from the fact that the snowfall in the area is so heavy that it was hard to tell who's house with which hence they started painting from different colors. That is no longer a problem since the advent of climate change as there is now very little snow falling each winter. If you look in the distance in this photo above the horizontal blue band you will see our ship. 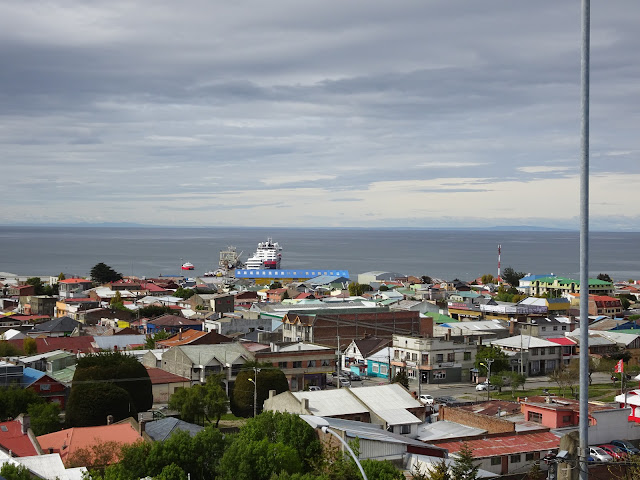 With this being only it's second voyage, it still looks brand-new. 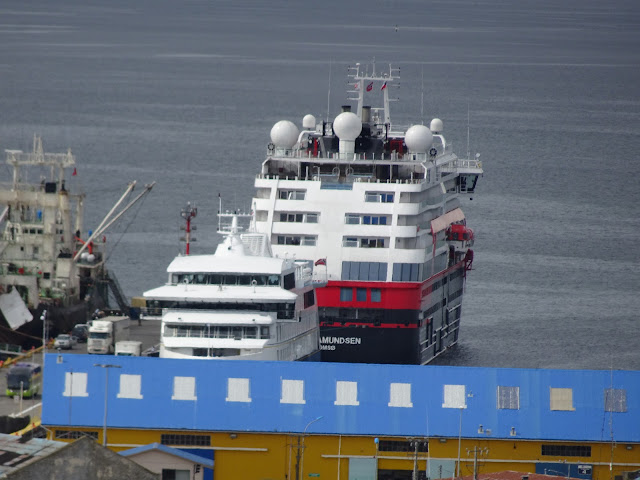 Yes it's a cemetery, and yes Linda was taking lots of pictures of graves. However even more interesting than the graves for the trimmed, or should I say partially trimmed cypress trees. Our guide said the city allots one day a year to trim the trees and whatever they get trend in that day is what gets done that year. They do things different in South America. Which by the way our guide always referred to as America. 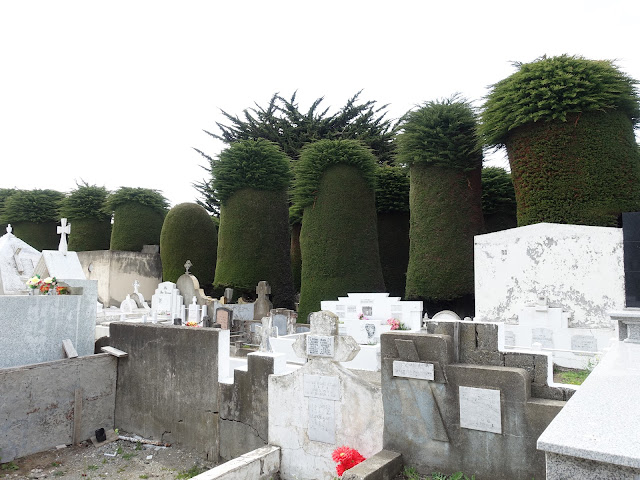 It's late spring in this part of the world and the tulips are out in all their beauty. Linda was lucky to find this handsome male model to pose beside them. Bad Bob. 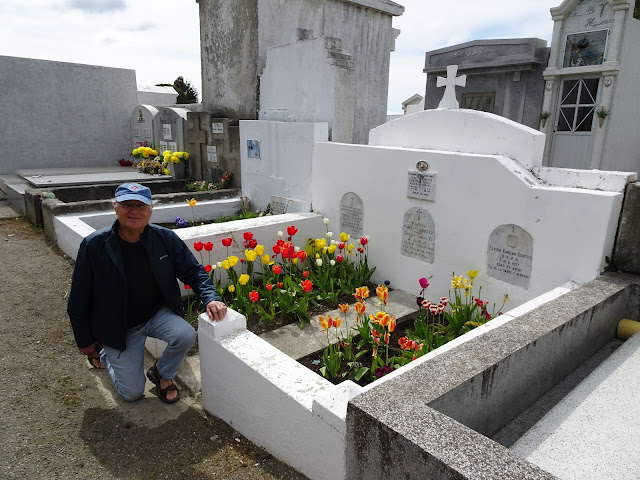 It's not hard to figure out why they named this penguin the chinstrap penguin. 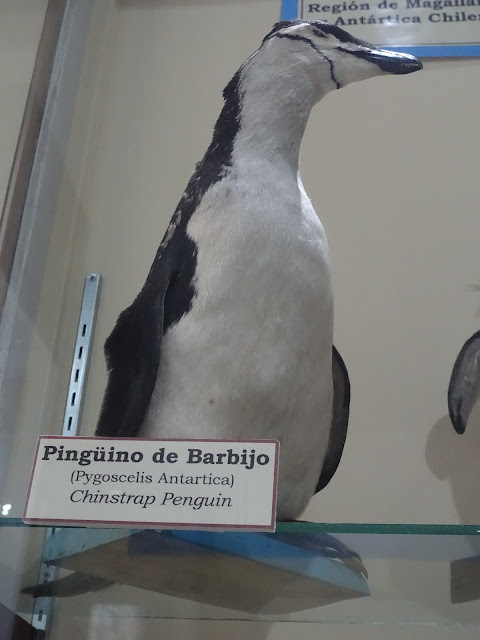 Magellan Monument in the center of town and the focal point of the demonstrations that mere the anger of the people at the government, particularly the billionaire President. 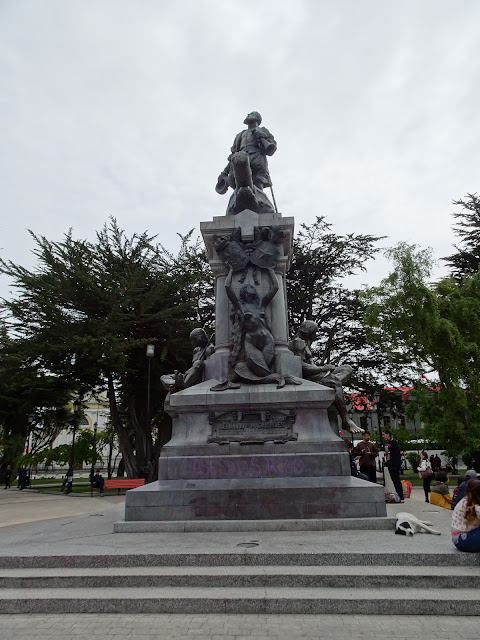 There was a very large demonstration when we first arrived in town that had all the streets around the square blocked off, so we went and visited other areas. Once the crowds from that demonstration had dispersed we came into the square. Here's a group getting set up for the next demonstration that will take place. They really really don't like their billionaire President. 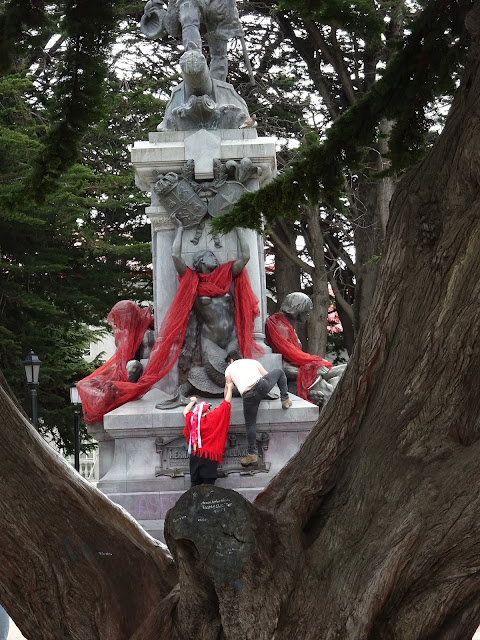 Government building facing the square. Note the paint splattered on it, and the broken window to the right. That is the result of either last nights demonstrations or the ones at noon today. 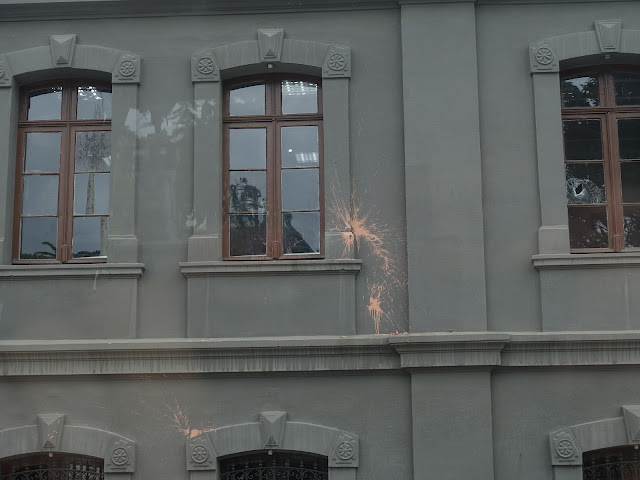 A beautiful pavilion built at the turn-of-the-century which was moved from the center of the square to allow the Magellan monument to be built. 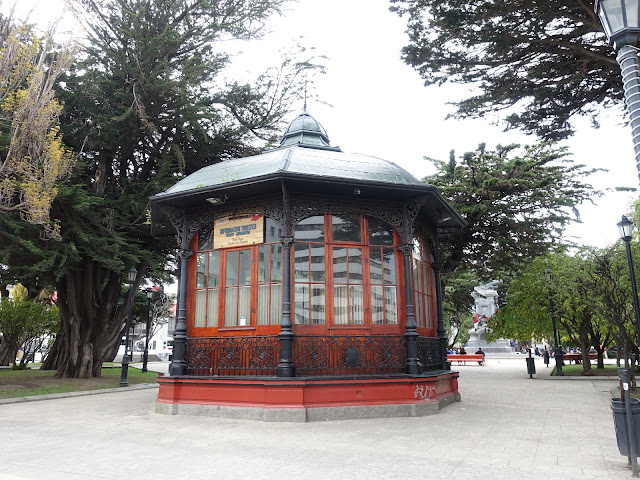 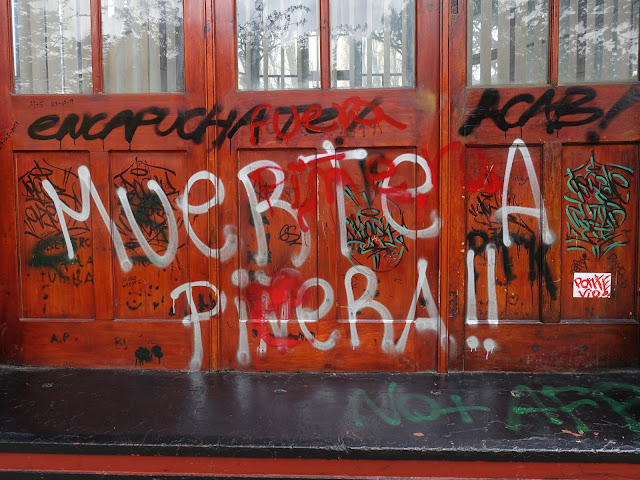 The older we get the more we realize that if we don't spend our money, someone else will. 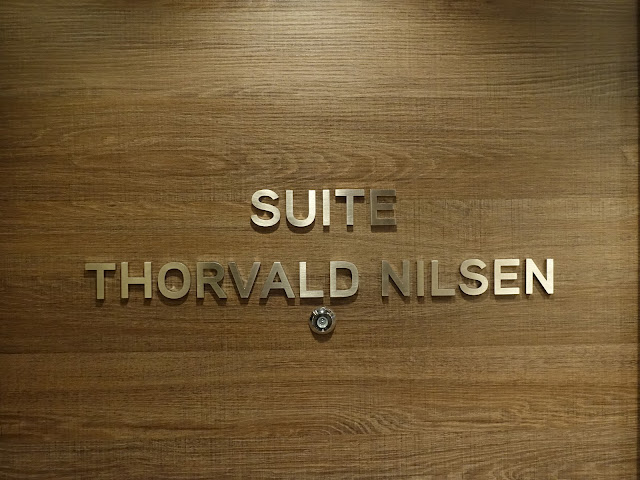 Very, very nice, and a huge balcony to boot. We laughed when we saw it because it has as much or more room as our RV we live in. Happy Linda. And what made Linda really, really happy was when she learn that all our laundry needs were included. Very Very Happy Linda. 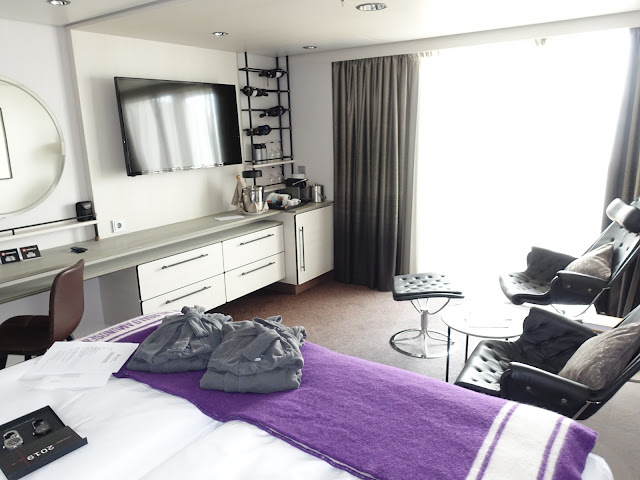 Safety briefing. There is a life jacket, and also a large survival kit you strap on as well as the cold weather survival suit you have to don. As long as the ship doesn't sink too fast we should be able to get everything on. 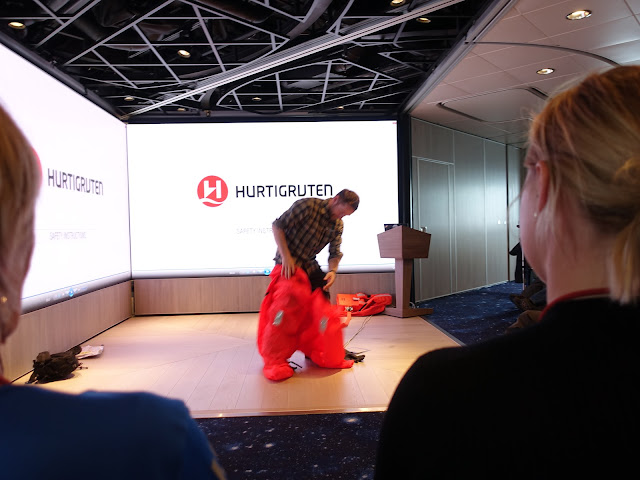 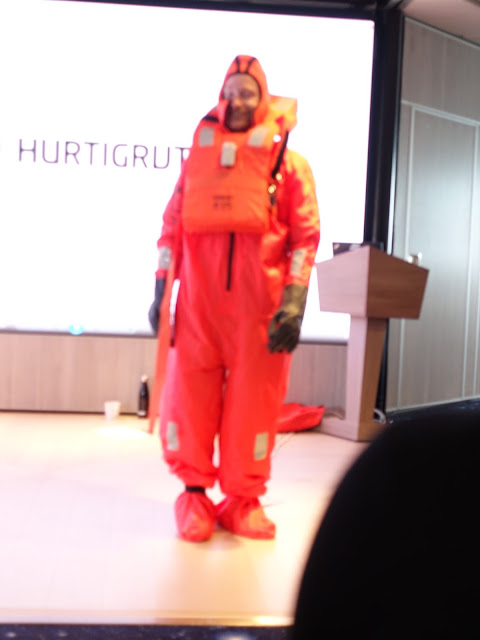 Our free jackets. Helly Hansen made, the very best foul weather gear in the world, period. We've debated buying some Helly Hansen gear in the past, but the price was always off-putting. As Linda said, the price we paid Hurtigruten was for the jackets, the trip was free. Bad Linda. 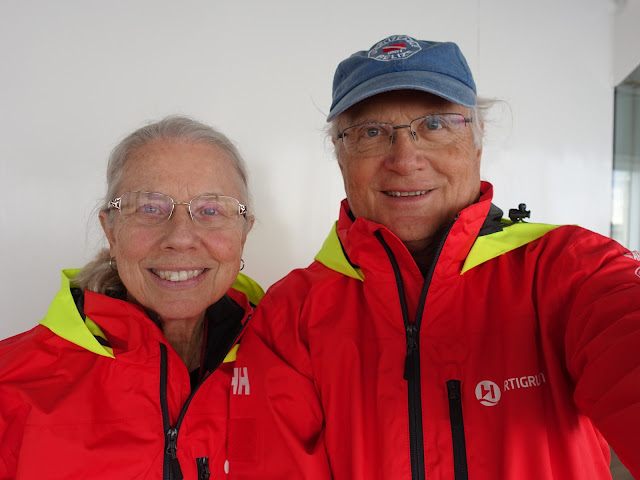 Did I ever marry well!!! 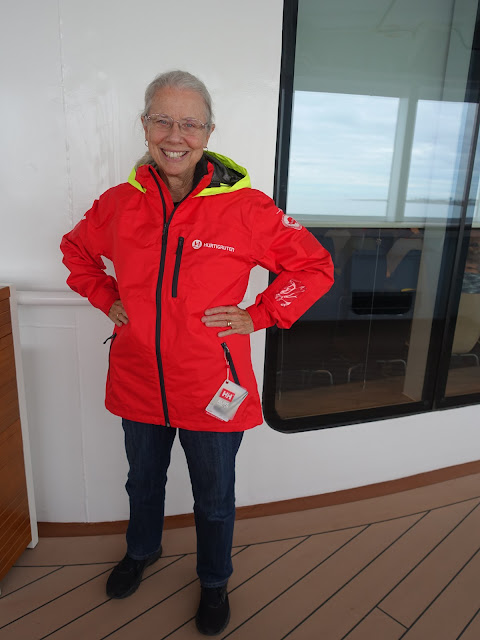 I was on my best behavior at dinner. Only three plates of seafood and two plates of desert. As an early registration bonus we also receive free wine at our meals. And I don't want to forget the welcoming bottle of champagne in our room. We really don't live this way, but a splurge like this once every 50 years is okay. 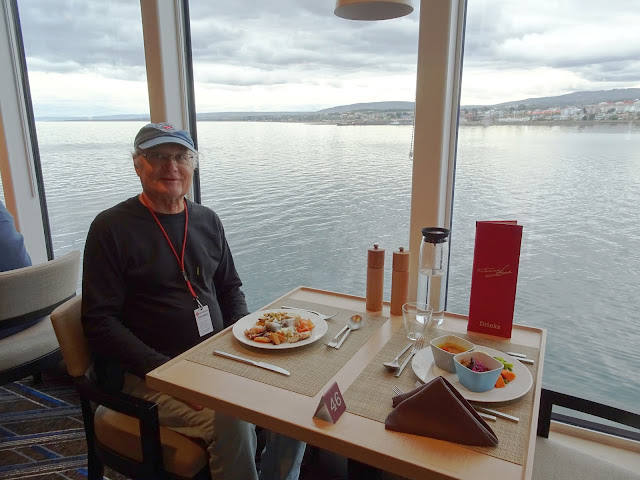 Only tree fires in town tonight. I don't know if I've mentioned it, but they really don't like their billionaire President. 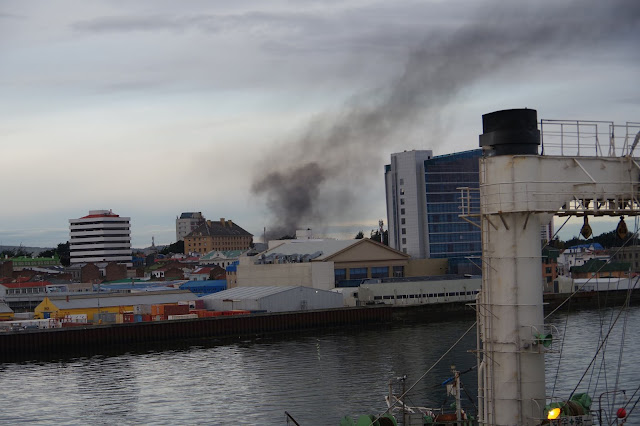 View from our balcony before departure. It is a huge fishing trawler unloading tons and tons of frozen fish in boxes. 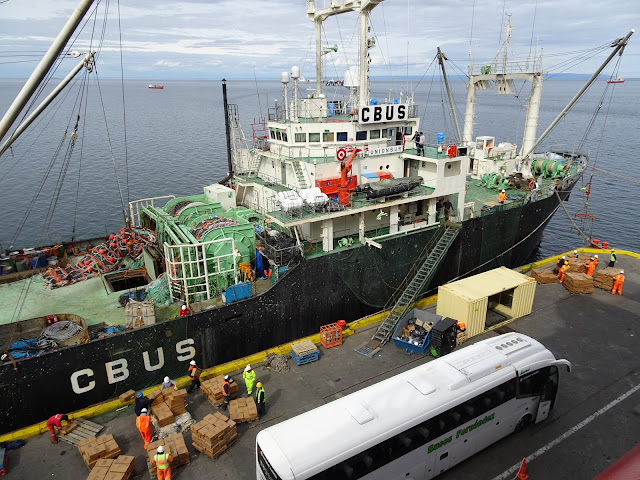 This was the inspector. First he drilled holes in number of the boxes show here, then he took a thermometer reading of each. 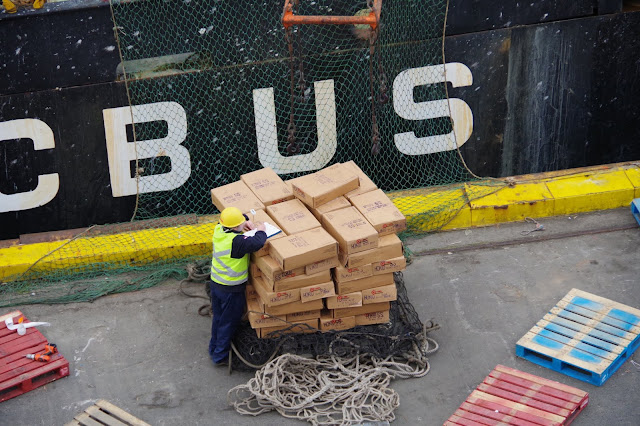 I still can't believe I've been able to get the blog to upload, at least I hope that is what is going to happen. I also promise I've gotten the Chilean billion President out of my system, so no more mention of that topic. I don't know if that makes me Good Bob or Bad Bob. The god's willing this post will go up and there will be another one tomorrow.
Posted by Bob and Linda at 2:43 PM