Our first flight does not leave until after seven tonight so Linda had planned an activity for the day. But before we could go out and do her thing we had to eat breakfast. I can say that over the years we have had a few not so good breakfasts in hotels. This morning's was by far the worst we've ever had. I only took a picture of where the supposedly sweet things and breads/rolls were, however the selection for the hot foods and the island with the fruits vegetables and other cold items were similar in the fact that the quality of everything was rock-bottom. I did mention how bad our room was yesterday but I will this morning, since not only was the room bad the air-conditioning fan extremely noisy and even the trash can was not dumped. I'll just say that we will never be staying at the Sheraton Miami airport ever again and leave it at that. 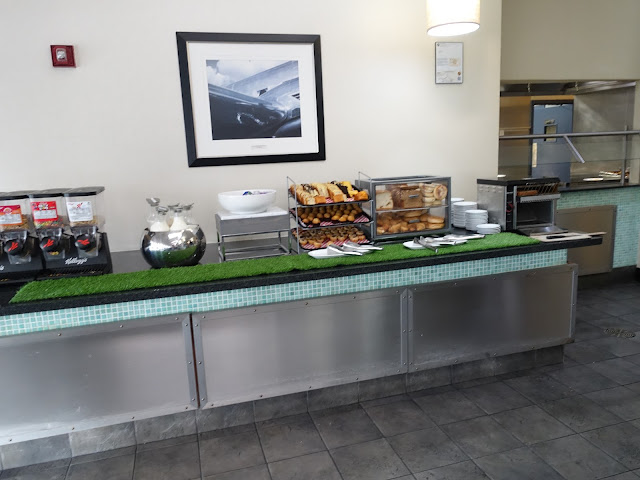 We joked at breakfast that we hoped our experience there didn't set the tone for the day. Were we ever wrong as it wasn't a joke. We had looked at the different modes of public transportation in Miami and decided that taking the Metrorail convenient bus connection was the best way to get to the activity Linda had selected for us. The station was right across the street from the Sheraton which was another reason we selected. But we didn't know was there were two different types of rail transportation in Miami that left from that same location. I'll just say we wandered some before we found the right one and leave it at that as there's not enough room to tell the entire story. The train itself which is an elevated subway system was bold and 30 with absolutely no signs that indicated which trait it was. 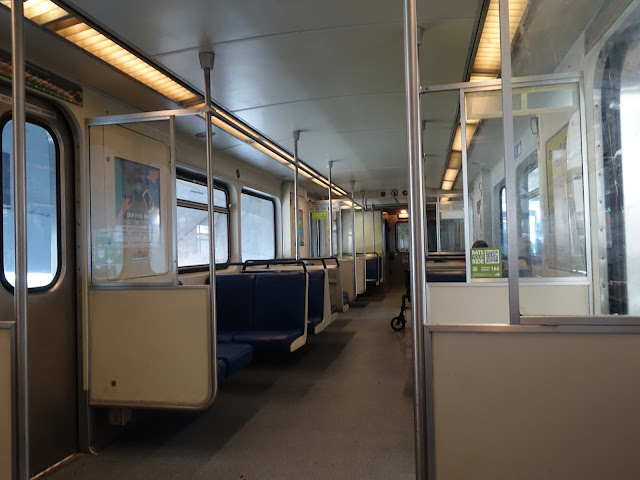 Of course when we exited the train station the street was completely torn up and under construction with barricades everywhere and after spending a half an hour talking to several bus drivers we finally located where the temporary bus stop was located. Or maybe it was the permanent bus stop but since there weren't any signs you didn't have any idea that's what it was. Then we waited and waited and waited for the bus. We were alone in waiting but that did make us feel any better. Then when we reached our destination and got off the bus we managed to walk in the wrong direction before we realized it and turned around and headed back to where we deeded to be. Once we paid our entrance fee and walked in Linda had her first smile of the day. 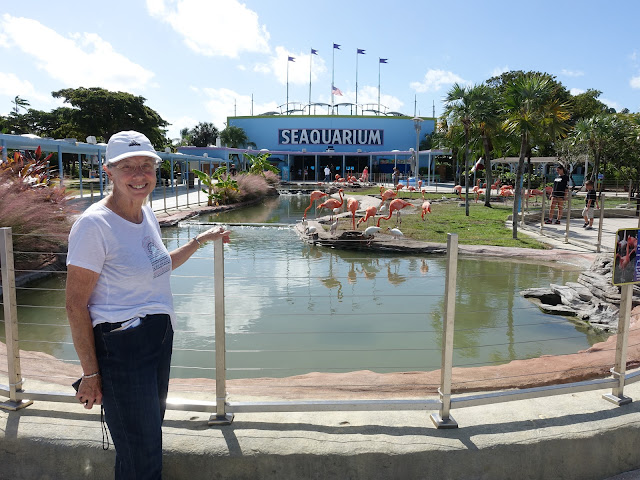 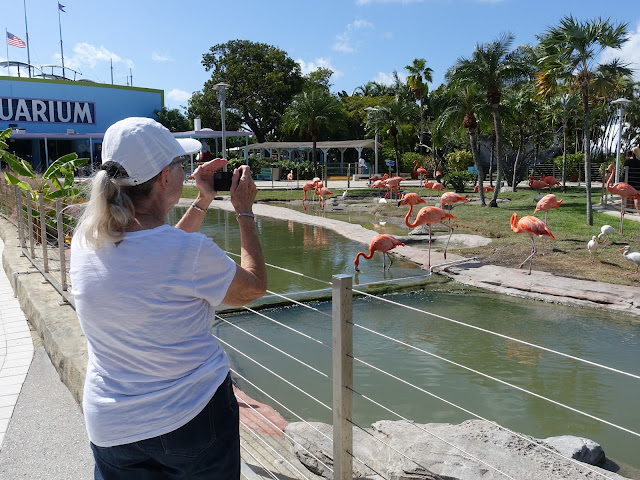 I teased her that if she took any more pictures of the flamingos right inside the entrance we wouldn't get to see anything else but would have to turn around and go back to catch the bus again. Yes it was an exaggeration but not as great an exaggeration as you might think. As for what she was taking a picture of in the photo above a low is the photo she took. I'll just say we could probably fill an entire photo album with flamingo pictures and leave it at that. 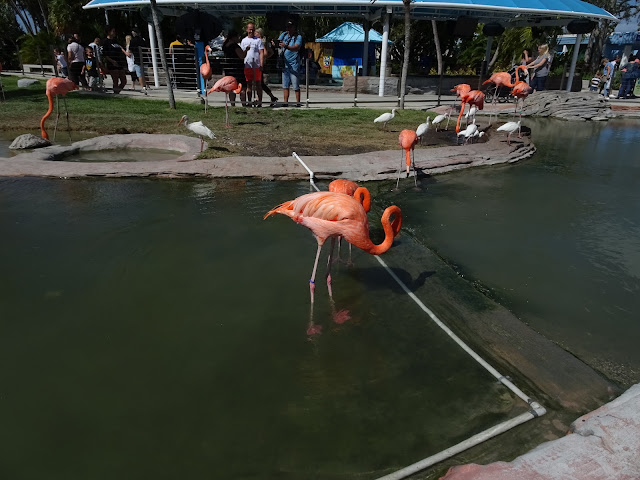 On of the really nice things about the day was the weather was quite pleasant with a steady breeze and the Seaquarium was not very crowded which made it doubly nice. When Linda was growing up her parents would always vacation in Florida and so she had pleasant memories of seeing manatees. 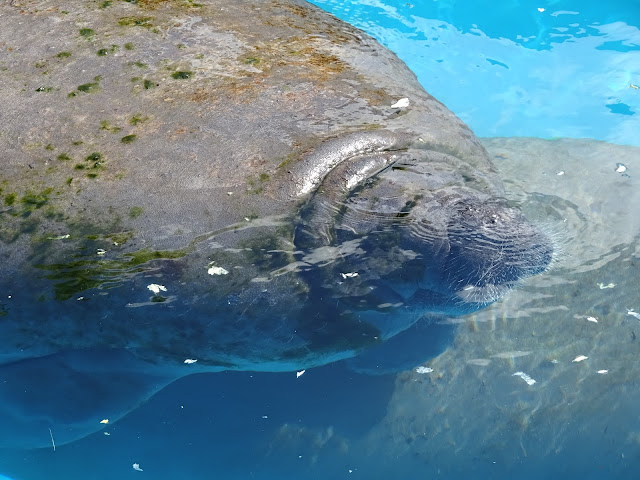 One of the things that brings a smile to my face is how, whenever she gets into these types of attractions, the kid in her really comes out. After she kept saying how soft the stingrays were I will admit I had to put my hand in the water and I can say she was absolutely right. 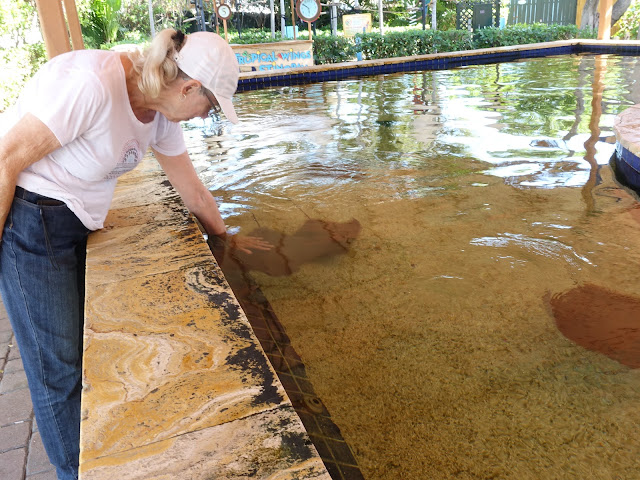 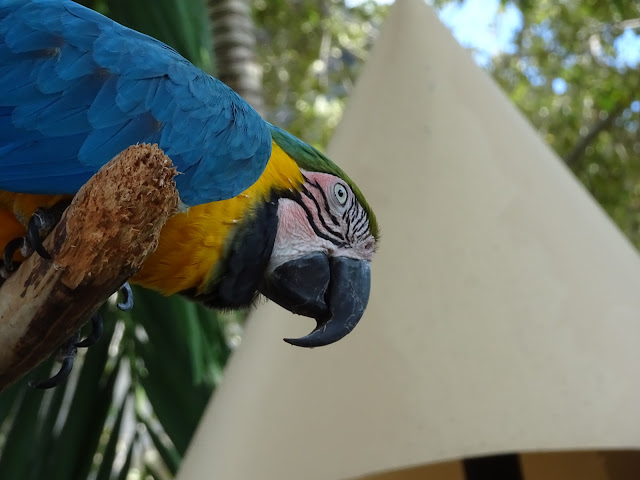 Linda took a lot of pictures of the birds and I know if I don't post at least one of them all here about it. 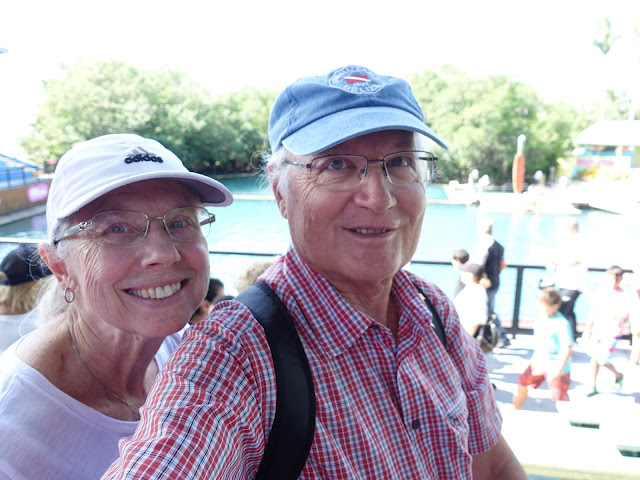 Selfie of the day. It's not about how washed out the background is it's about how big the smile is on Linda's face. When she was a teenager the one show on TV that she loved the most and would never miss was Flipper. Moments later the show started and Linda was a kid again. The photos that follow are all hers. If she wasn't smiling she was oohing and aahing, or she was clapping. The rest of the time she was taking photos. Happy Linda. 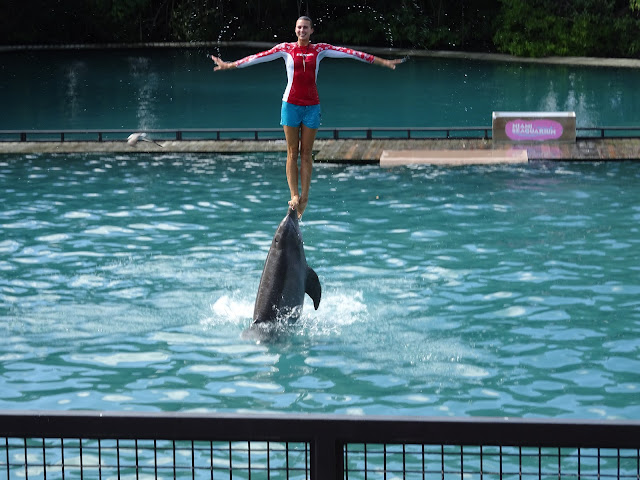 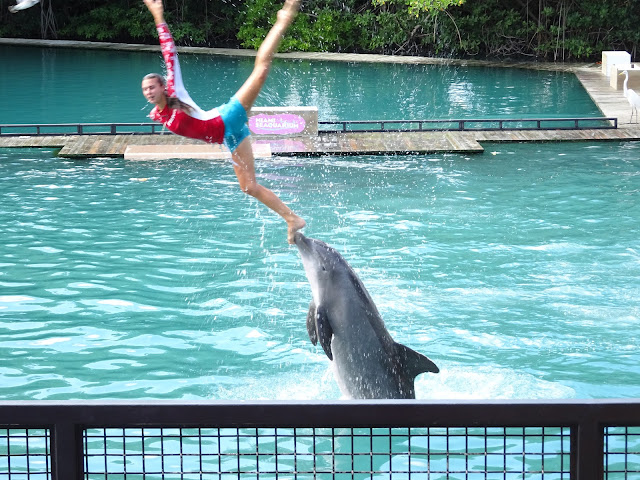 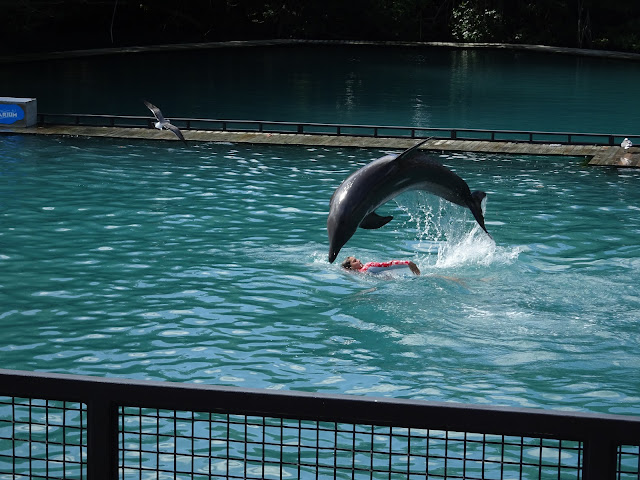 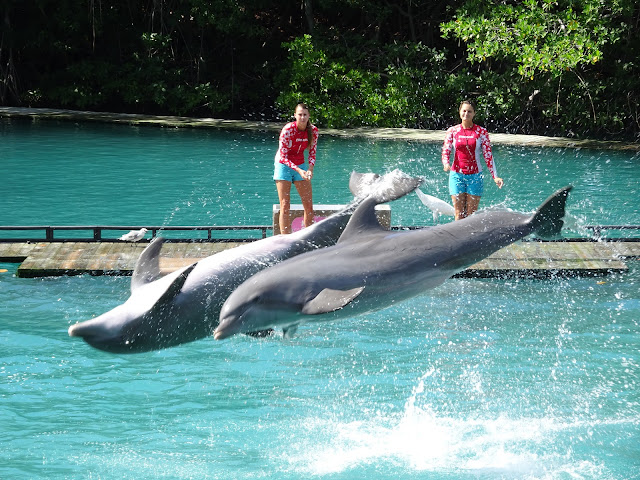 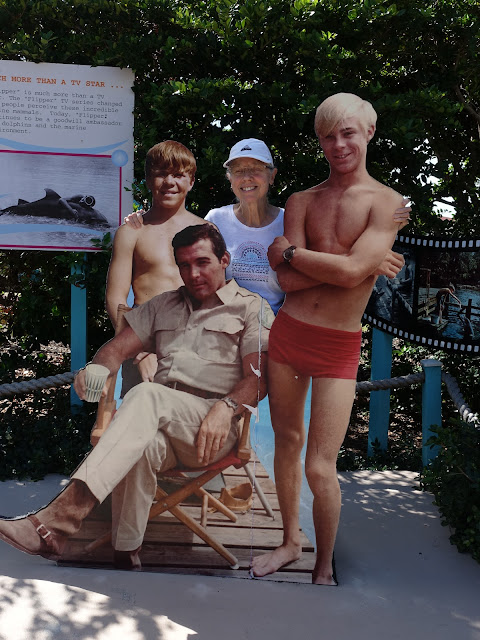 Posing with the stars of Flipper. If you look close you'll see she wasn't just standing there she had her hands on the shoulders of the two boys. I think it's called getting to relive moments of your childhood. 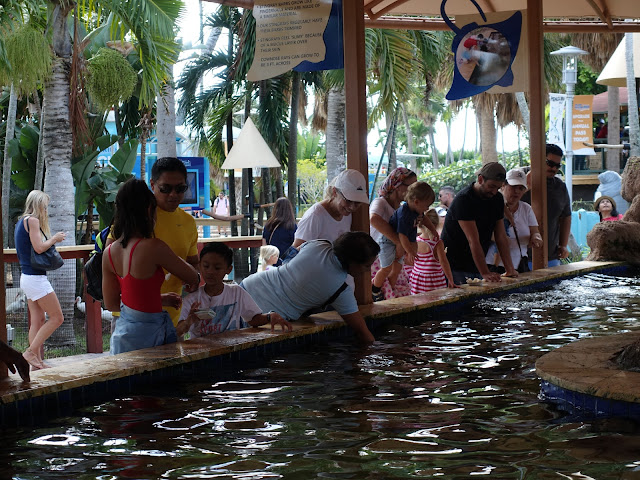 Stingray feeding time. Linda didn't want to feed them, but she was within inches of this lady who was feeding them. 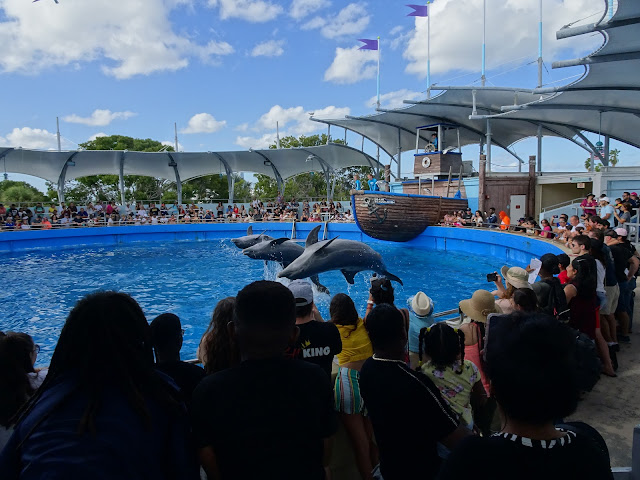 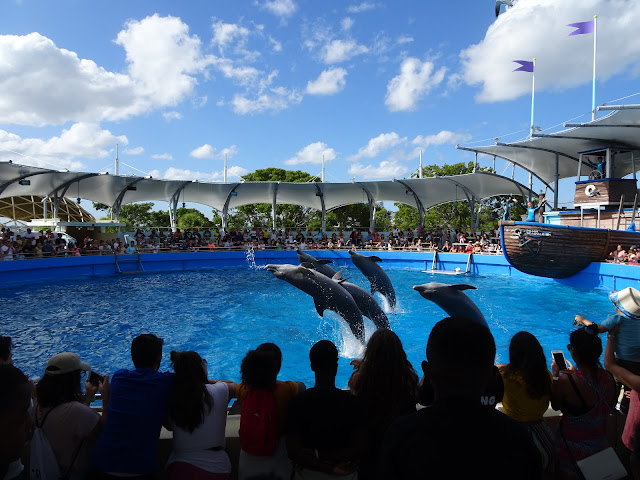 What goes on at the bottom of the tank when the top tank show is over. 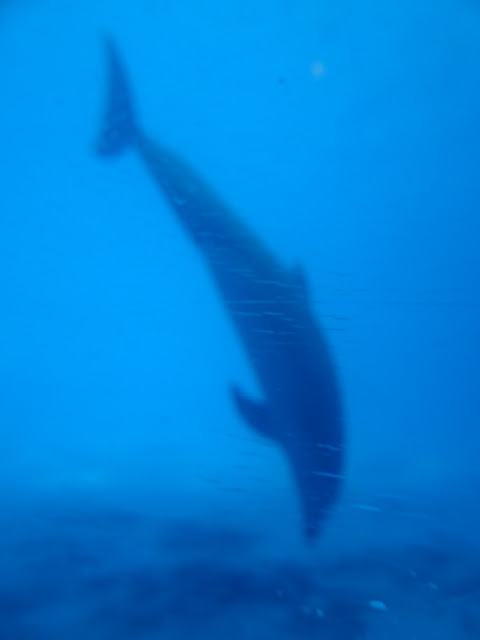 Flipper and the killer whale shows were the two things she really wanted to see. This was the sign in front of the killer whale show. Even though she missed seeing it she was still a very happy girl and it was fun being there for me also. Of course just as we came in sight of the bus stop on our way out of the Seaquarium, the bus heading back into town pulled up and left. That meant we sat in the sun for a half an hour waiting on the next one. That's when we got to talking about the fact that all the little frustrations would be out of the way and our trip to Antarctica would be fantastic. We shall see, we shall see. 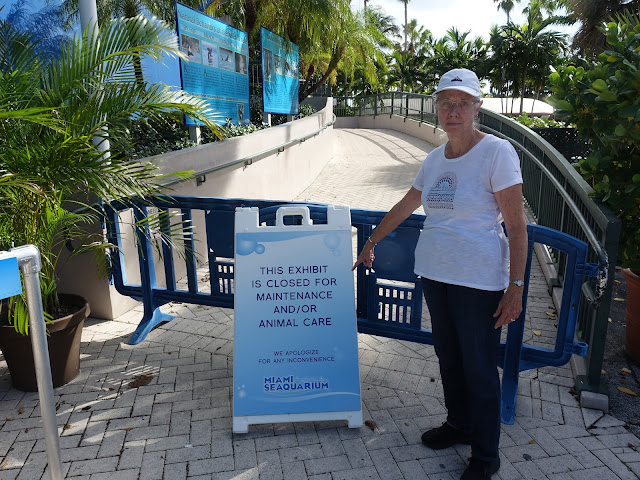 Leaving on a jet plane from Miami bound to at data where we were changing planes for our flight to Santiago, Chile. At least things turned out a lot better than it had earlier in the day. We had a short connection in Atlanta but that airport is so well laid out we made it with plenty of time to spare. The only thing that went wrong was that you take a train between terminals and I managed to get on my Linda managed to not get on. Our rule is whenever that happens no matter where we are or what the train line subway whatever, you get off at the next station and wait for the person who didn't get on the train to come in. That's exactly what I did, and as I stood on the platform as the doors of the train opened, I was greeted with an enormous smile from Linda who was looking out from the train. It made my day. I did good. Happy Bob 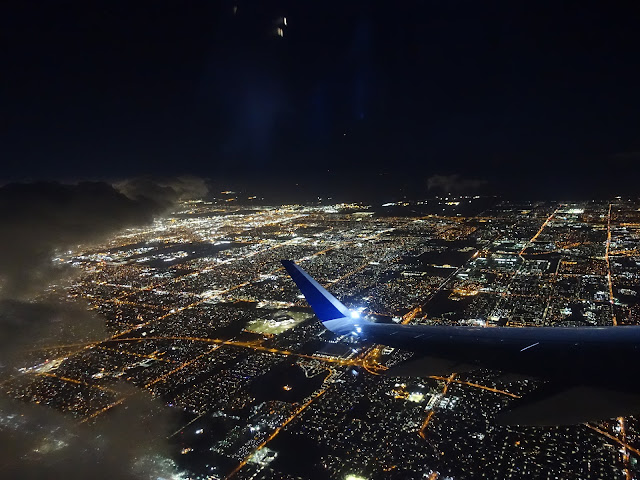