I have been so pleased to be able to post the blog every day, especially since what I read before indicated that Internet connectivity would be very limited. Today being the day we cross the Drake Passage, Linda was also very pleased because everything she'd read about the Drake Passage indicated that seasickness was the norm and in the scheme of things today's crossing was relatively smooth. Very Very Very Happy Linda.

To sum up today, we spent time eating, going to programs, standing out on the balcony and getting some relaxation caught up on. Linda, being female and therefore genetically disposed to shopping, spent time filling that need. 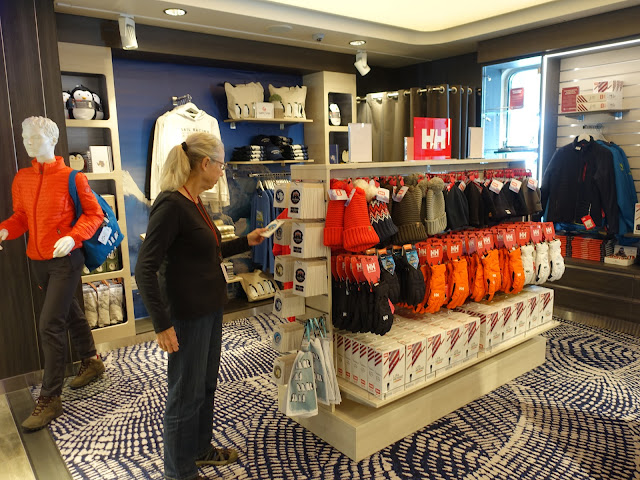 The first four channels on the TV in our room give information about the trip. The other night they listed the fact there were 23 different countries represented by the passengers aboard ship. Number three was Germany, number two was Great Britain and the country with the most passengers was the US. All announcements and most of the programs are done in both English and German. I like to have the German up on the screen much to Linda's consternation. 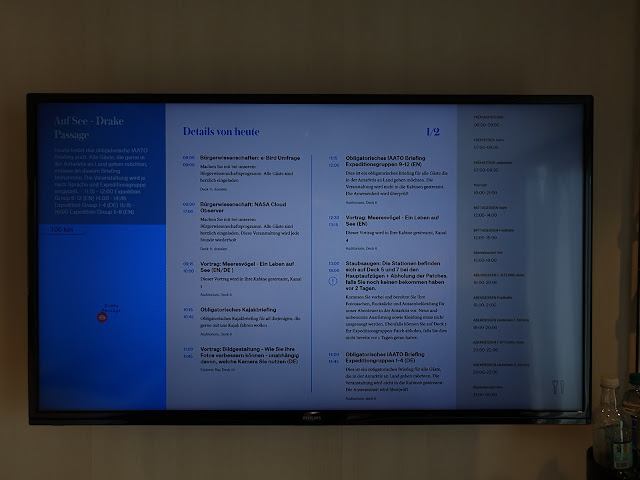 That means that Linda has her own way of listing all the events and their times throughout the day. It usually works very well for her, except for when she puts the paper down someplace and then can't find it. Bad Bob. 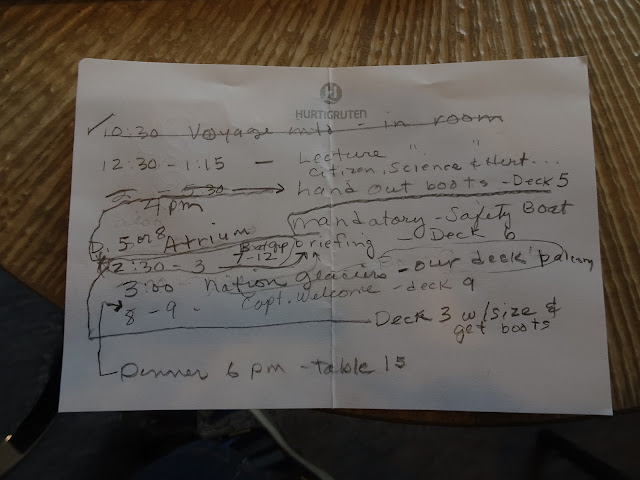 Why do I keep finding photos of the boot dryer on Linda's camera? Wasn't it enough for her to pose the question on Facebook? Knowing what's good for me, here's one of the photos she took. I did make a suggestion that I think she likes very much, which was to turn the dryer on about an hour before it is time for us to go ashore on Antarctica as the temperatures will be quite cold. Meaning warm boots, when she first puts them on, would be a very nice thing to have. Good Bob. 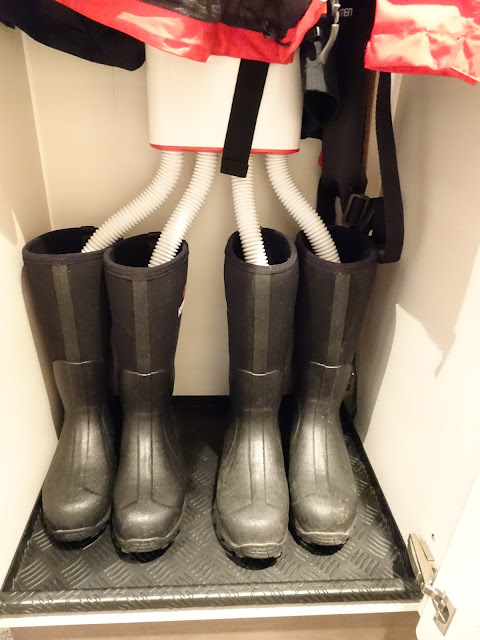 Time for another food photo. What my dessert at lunch looked like 47 seconds after I took the first bite. 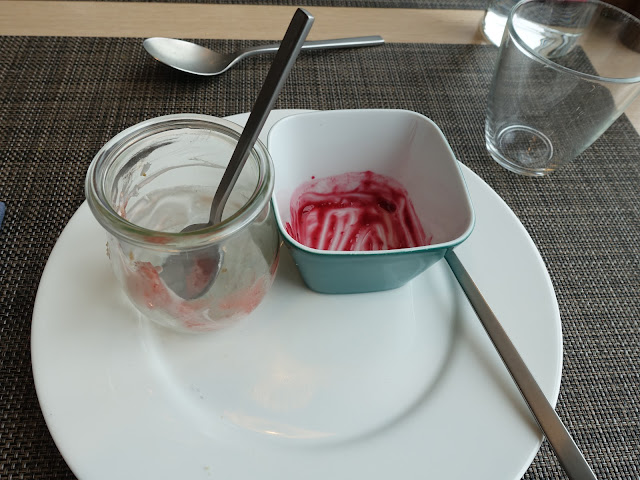 What it looked like before I took that first bite. And I'm posting it just to show that not everything I eat is seafood, though I am hopeful that there will be a seafood dessert one of these times. 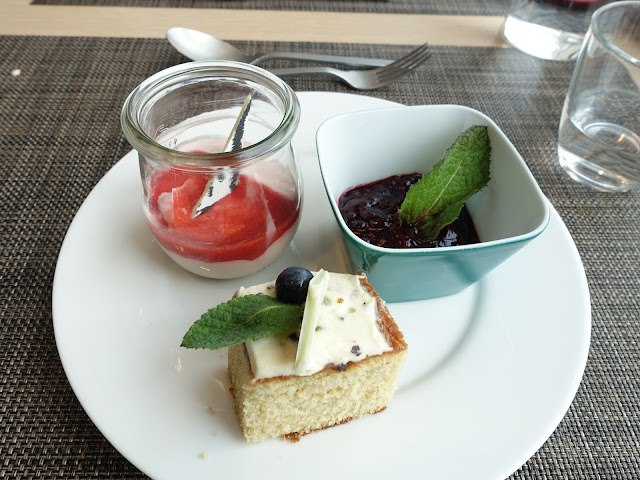 The Drake Passage looked like this at times during the day, the sky that is. Other times it was cloudy and foggy. But for Linda the best was that the water usually look like this. They say the Drake passage has two names. The Drake Shake where the ship is rocking and rolling and anything not contained is likely to end up on the floor including your last meal. The other is the Drake Lake, where there is a slight amount of motion but overall it is a very smooth crossing. During the day Linda must've said "I love the Drake Lake," a dozen times. I think I've mentioned it before but Linda was a very happy girl today. 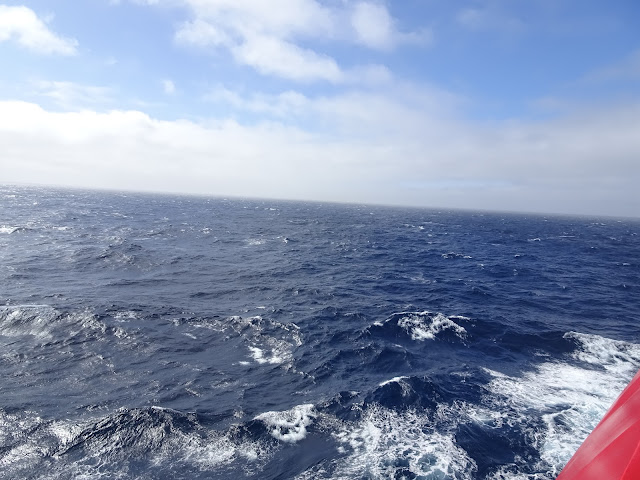 Linda took this view down the aisle from our table at dinner time. This is our fourth trip on Hurtigruten and each time we have been fortunate to have a window seat for the dinner meal. An additional bonus on this trip is that we were given a free wine package. 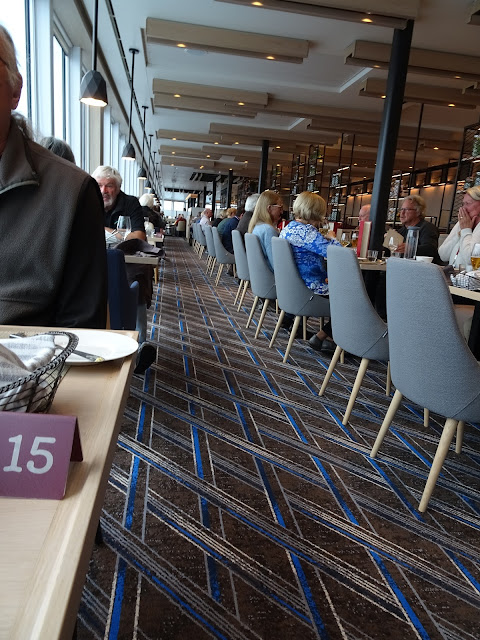 The chef came around tonight and visited with the guests. He's very personable and obviously extremely proud of how well his staff performs. Linda asked him how he keeps the strawberries perfectly fresh after so many days at sea. He smiled and said "It's a secret, but if I did tell you then you would have to walk the plank so it would remain a secret." He isn't just a fella that wears a tall white hat, he's a really cool person. 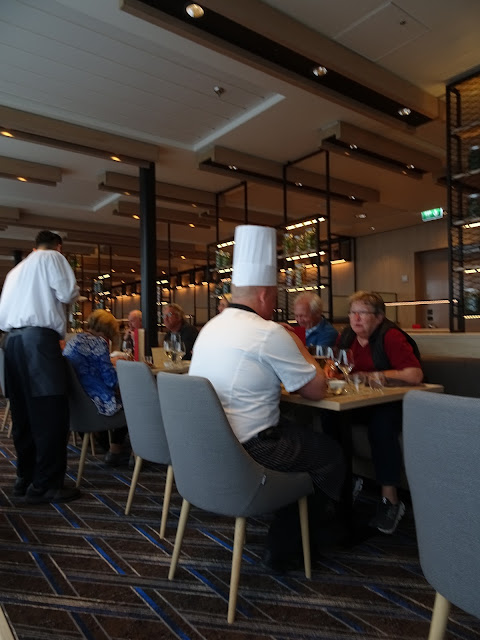 It's been several years since we cut the cord and only watch Netflix and Amazon. With satellite TV reception on board the ship, Gold Rush Alaska was a show that we always used to watch on Friday nights. We thought we'd find out what Parker was up to, but quickly discovering that there are as many minutes devoted to commercials as to the program, so we ended up turning it off. After two years of no commercials we have absolutely no use for them and the unbelievable amount of time they waste.

Tomorrow we will be arriving in Antarctica. Our group is scheduled to go ashore at two in the afternoon for an hour and a half. The forecast is for 32° and 20 to 30 mile an hour winds. I wonder how many layers of clothing Linda will have on and whether she will actually be able to move around. We shall see, we shall see. Bad Bob. 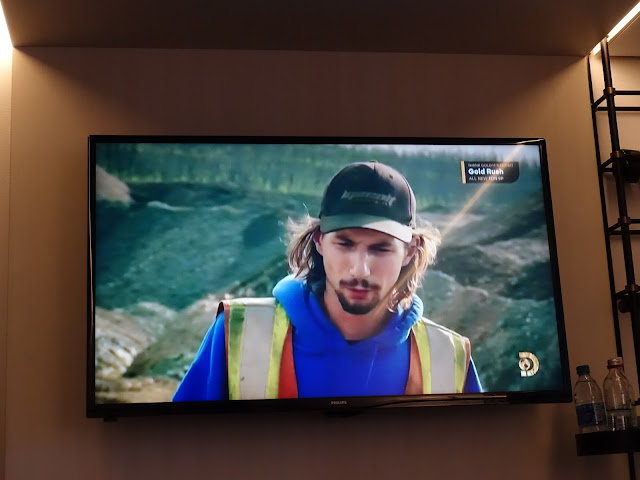 Email ThisBlogThis!Share to TwitterShare to FacebookShare to Pinterest
Labels: At Sea, Drake Passage