Too many things going on today to write about all of it, so picked a few that tell a story and threw in a number of other photos. 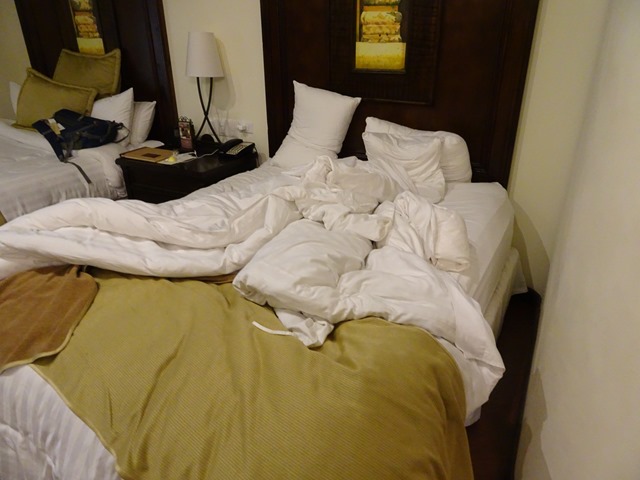 It’s a hotel, so we don’t have to make the bed. What the photo shows is the massive amount of thick layers of bedding, most of which Linda throws off the end of the bed when it is time to hit the hay. If she didn’t do it I believe she would dream of a headline in a local newspaper, American tourist crushed by bedding. Bad Bob. 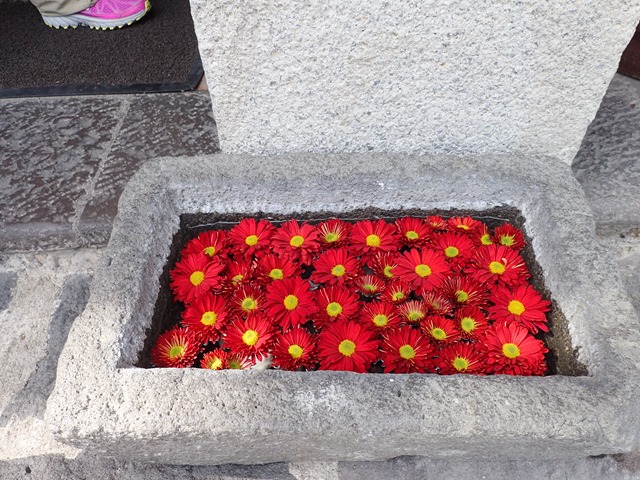 Seen at various locations around the hotel, flowers floating on top of water. Very pretty. Other than possibly being smothered by our bedding, we really like this hotel. 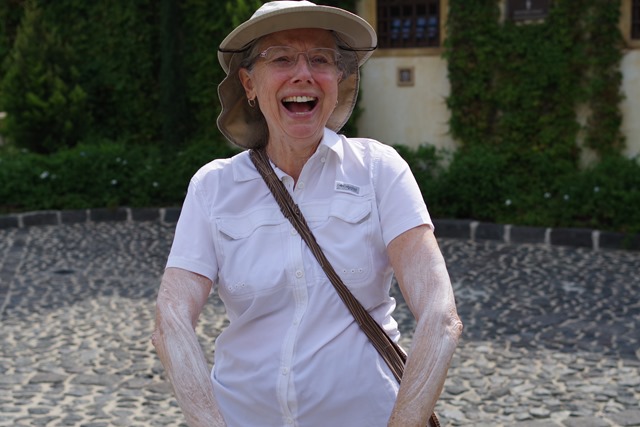 Anglo tourist was told to use sunscreen. Anglo tourist nearly smothered in sunscreen.  Wonder what she is going to dream about tonight? Last night she woke me up in the middle of the night claiming I was dreaming and kicking her. Tonight she will likely be kicking me as she tries to escape from the giant white blob. 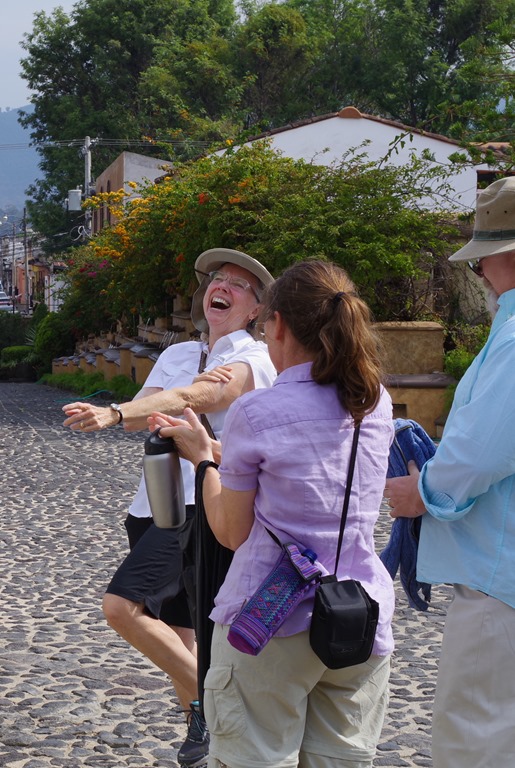 Her reaction to the fact that the more she rubbed the sunscreen the whiter it got. Not sure I should claim to know her. On the other hand, the first time she laughed after I met her I was hooked for Life. Any woman that can laugh like that is for real. 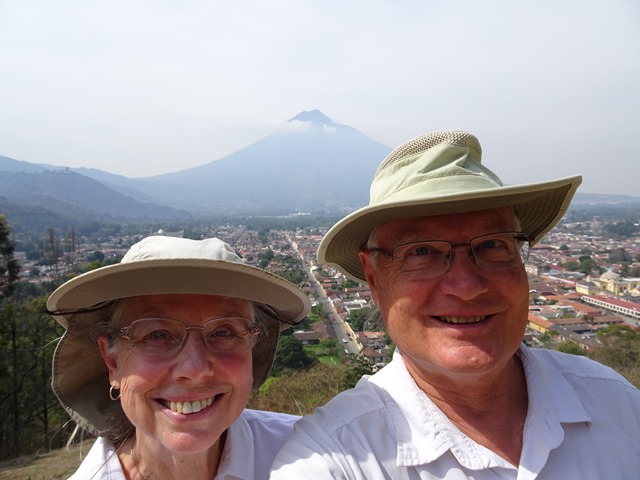 Haven’t posted a selfie for a while. Overlook above town with volcano in the background. Richard sure knows all the cool places. While here, another tour member and I were talking about what a great view it was. During the conversation Terry mentioned that Richard was by far the best O.A.T. tour guide he had ever had. I told him Linda and I agreed with him 100%. 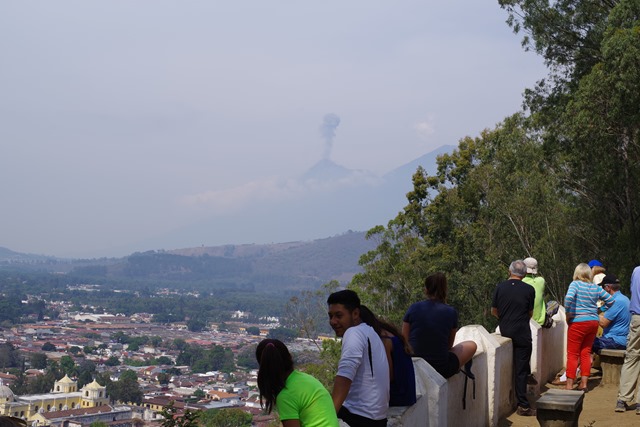 As we watched, one of the three active volcanos in Guatemala belched. Awesome. 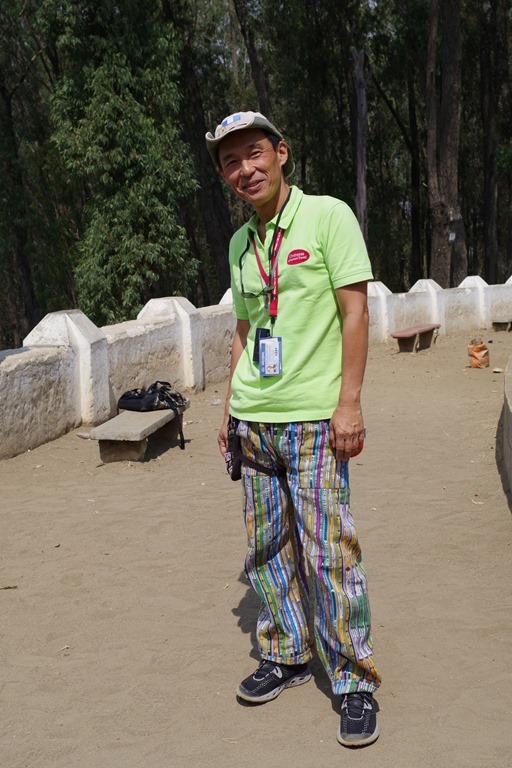 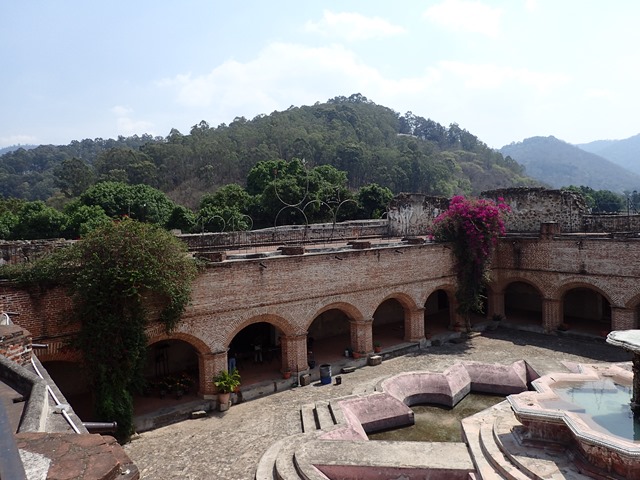 I had to go and post yesterday about churches. Today we had a local guide and it turned out to be a real hum dinger of an ABC day. For anyone new to my writings, ABC= Another Blasted Church. Church ruins from the 1500’s or there abouts were her forte’. Reminder to Bob – not everyday can be exactly what you like. ABC’d Out Bob. 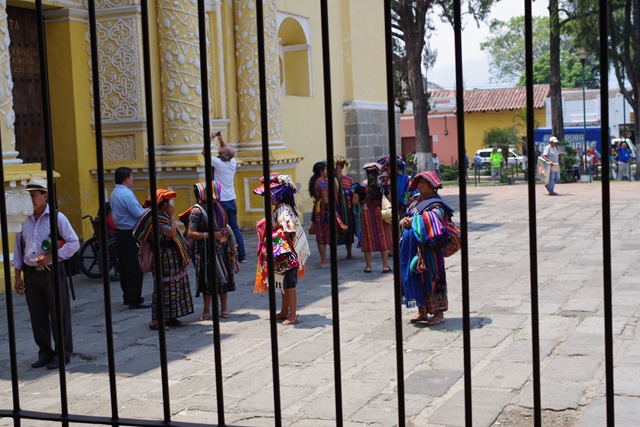 Outside the entrance to the church the vendor hoard awaits. The nice thing about Mayan vendors is they take no for an answer and move on to the next person. 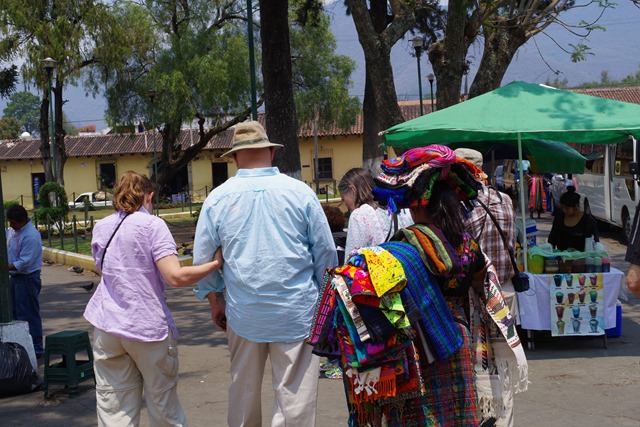 Barb, John, Judy and the other Bob with vendor in hot pursuit after Linda had told her no. Mayan fabrics may be beautiful but they aren’t Linda’s cup of tea. Whenever I comment about one being awesome she says, “Were are we going to put it?” The result being I shut up. Knows What’s Good For Him Bob. 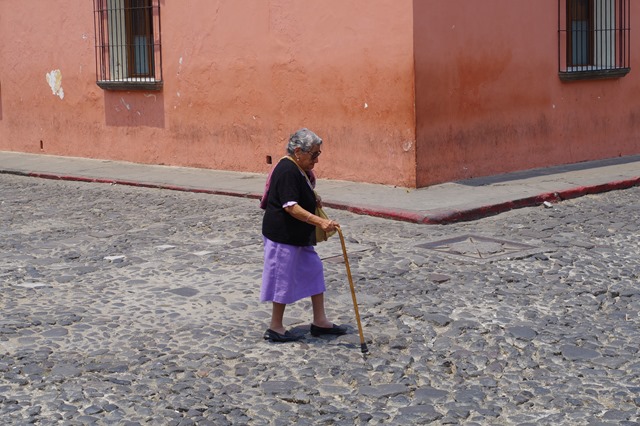 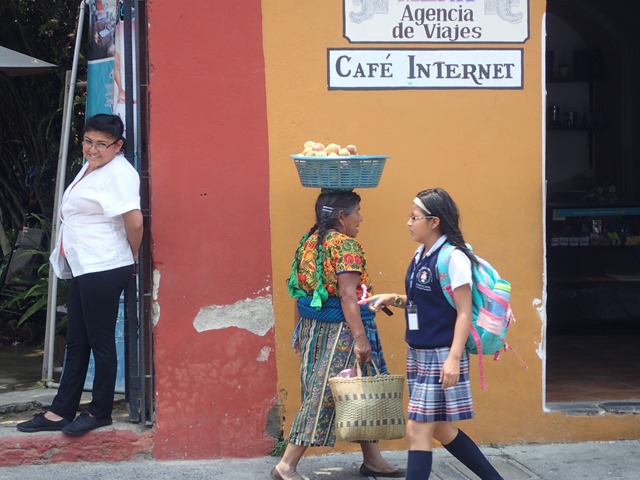 Duality plus one street scene. 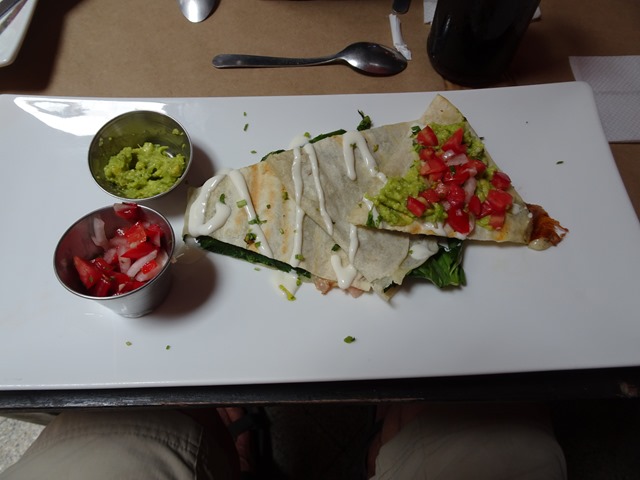 To make up for a lack of food photos, I give you my lunch. Spinach bacon quesadillas with salsa and guacamole. 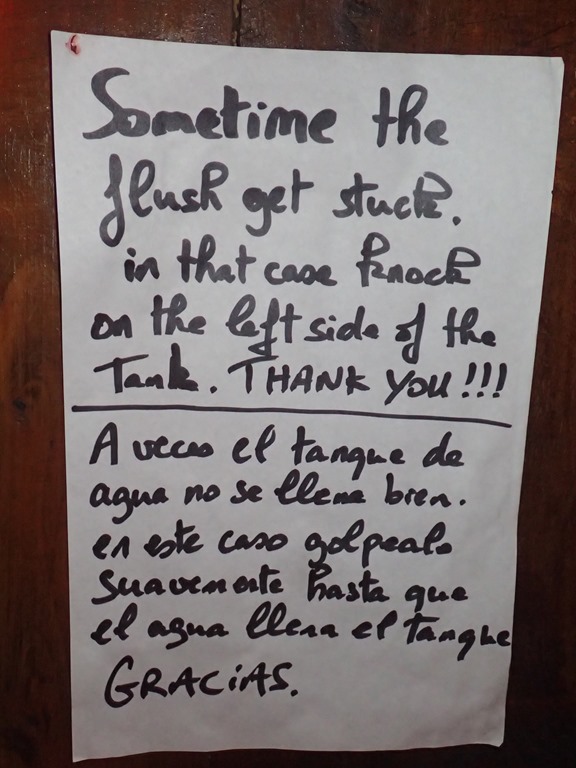 Sign in the restaurant restroom. Linda reported she did not have to knock. Now I wish I had used it, it was a unisex restroom. Maybe I would have had to knock. Regretful Robert. 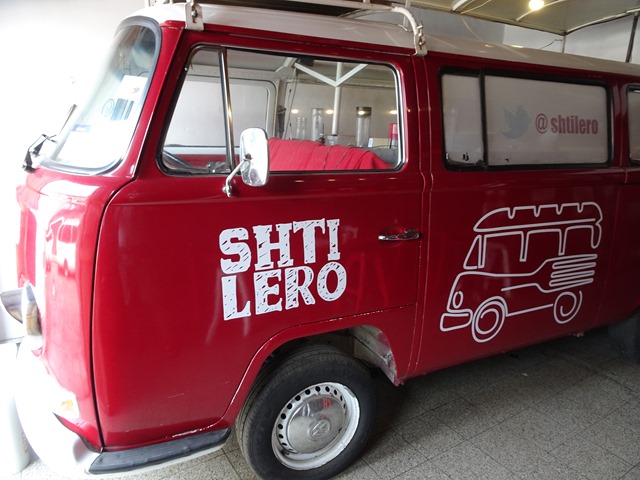 Name of the restaurant with the problem toilet. Pronounce the name and think of the toilet. 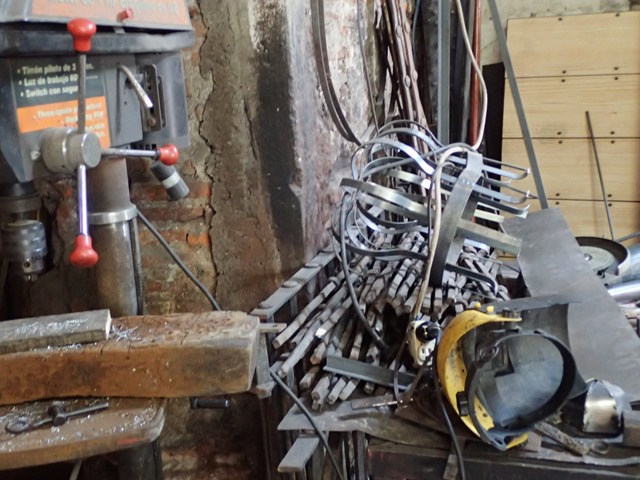 A visit to a metalsmith shop. The photo doesn’t tell the story. Looking around I couldn’t see any patterns. I asked Richard to ask the owner if he used patterns. He said he didn’t, he knew in his head how to make the item. He was a true artist and it showed in his work, a photo of which I haven’t posted. After all, I have to leave some things to you reader’s imaginations. 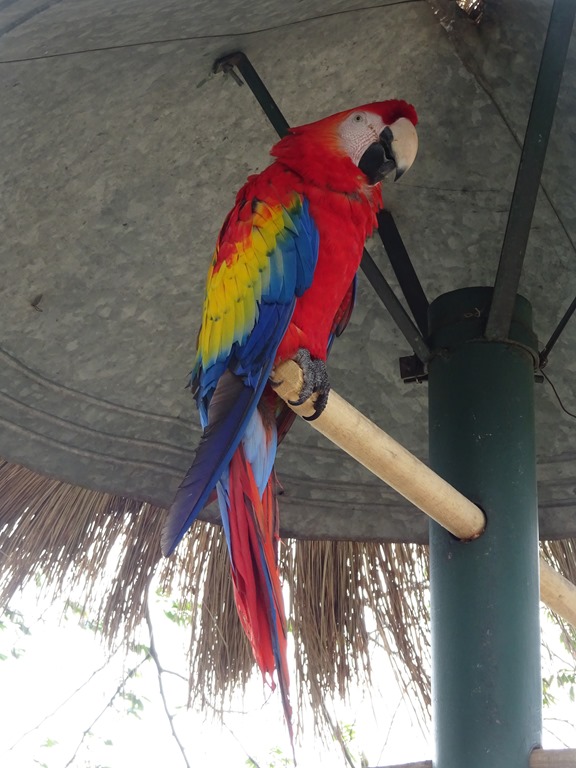 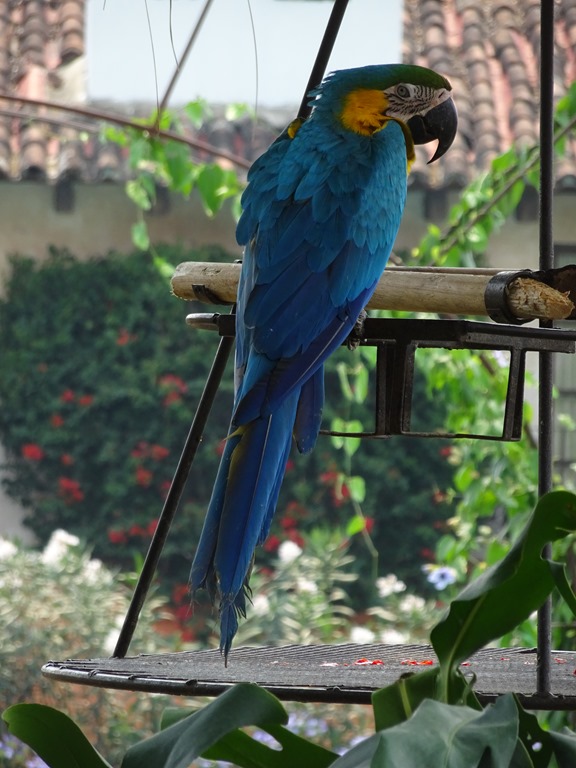 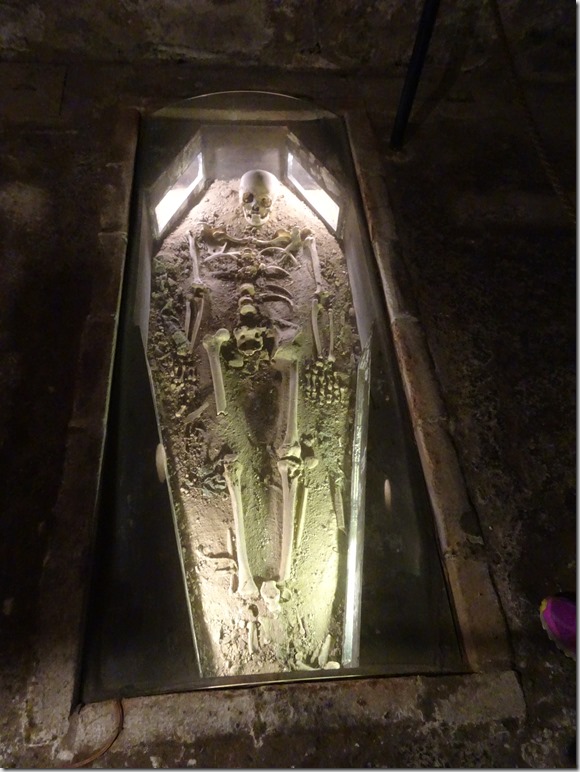 Seen beneath an ABC. 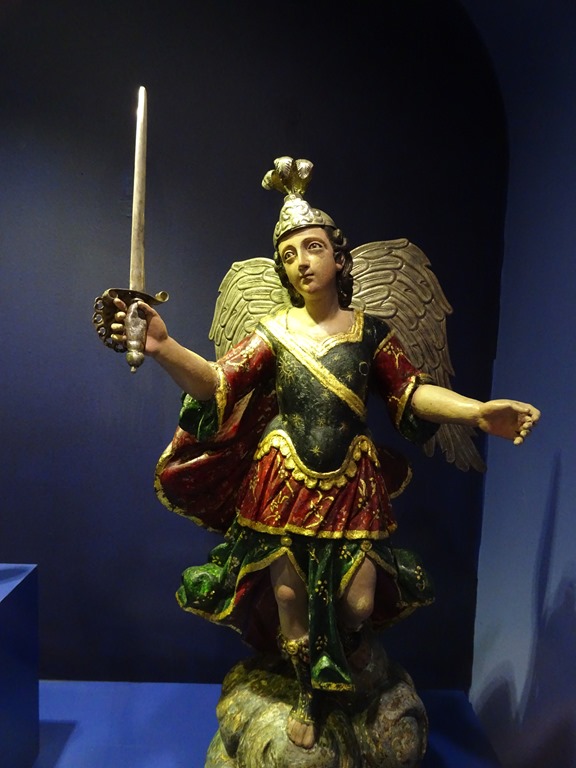 Fantastic painted wood carving from century’s ago seen in a museum in an ABC. Museums in an ABC are on Bob’s acceptable list. Droning commentary by a city guide walking around several ABC’s is not. Why can’t other city guides tell the history of a town without spending almost all their time in churches . Ben did it, so I know it can be done. 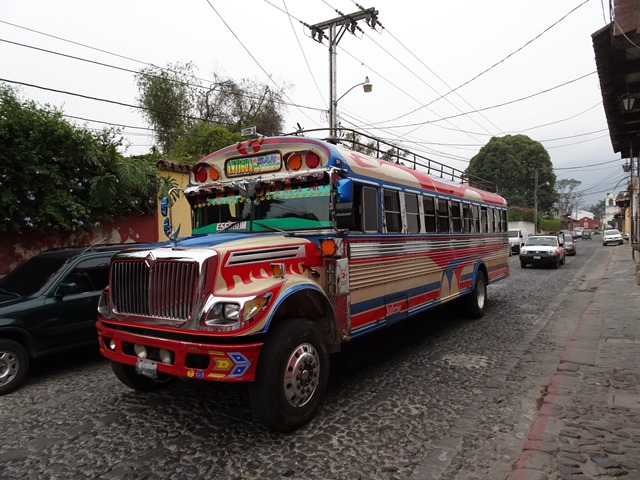 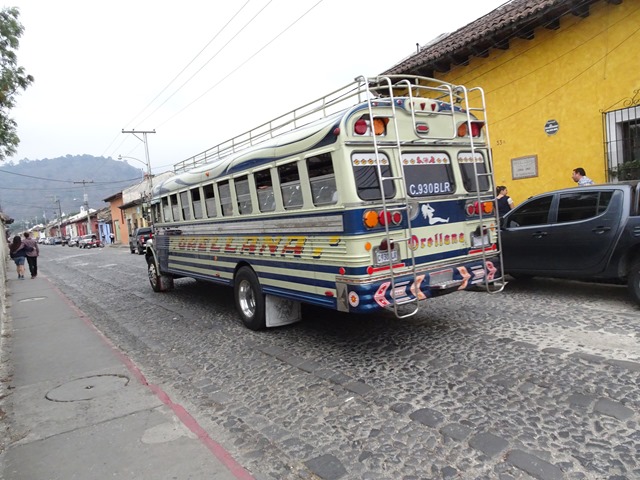 Chicken bus rear photo. I love Chicken buses. Get used to it. If the Retama Photo Club asks me do another presentation on our trip, I have hundreds of chicken bus photos I can show. Be careful for what you ask for Scott. 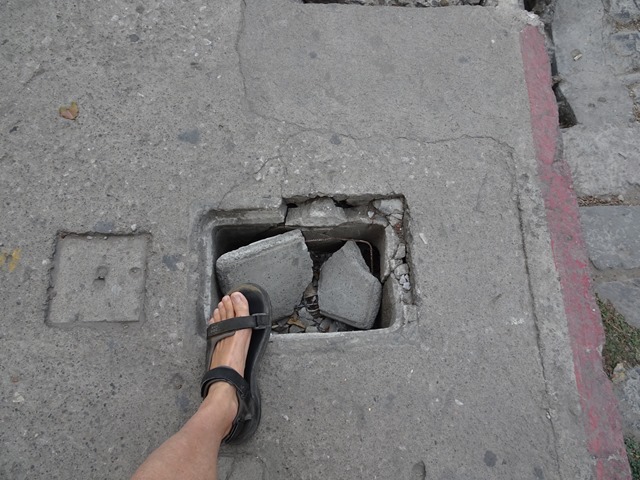 Photo reenactment. As we walked down the sidewalk to a nearby market to buy me a tee shirt with a certain type of vehicle on it, I literally stepped into a hole in the sidewalk. Fortunately my foot was a perfect fit and it went in and can out with no damage to my foot whatsoever. A few inches one way or another and I could have had easily had a broken ankle. Linda didn’t say how lucky I was, she told me to watch where I was walking. 50 years and the bloom of early love is somewhat faded. Bob the Jaded Romantic. 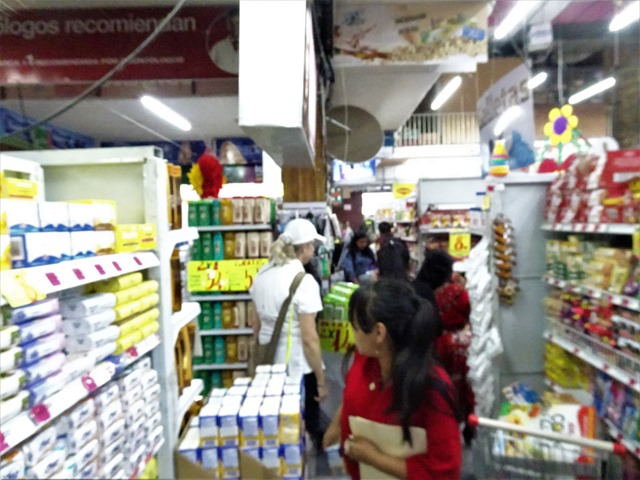 Not the greatest photo, but if you’ve ever been in a Guatemalan grocery store around 5 PM you’d understand. The store was jammed to the aisles. Everything was in Spanish. But we survived. Nothing ventured, nothing gained. 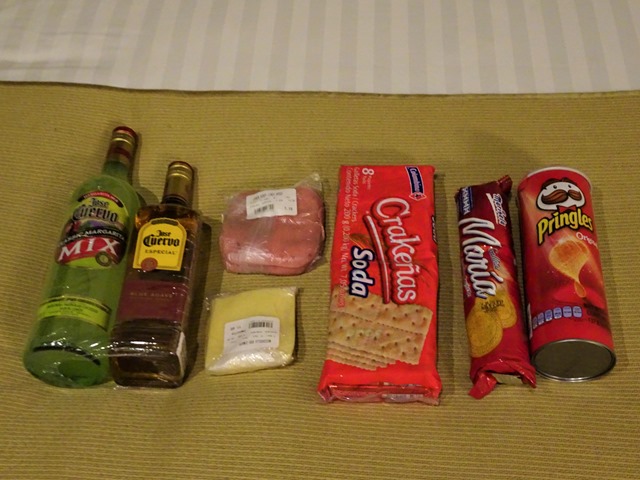 The prize was Jose Cuervo Blue Agave Tequila and the margarita mix both for 99 Quetzal, $13.38 in US money. That is Mexican prices. As for the Maria’s galletes, Linda took care of them. Not every meal needs be street food or a restaurant meal. An occasional visit to the super Mercado can pay dividends. And with that it is time to say Buenos Noches.