As you might expect, a good many of the photos taken today were from the bus, but we did do several neat things along the way when traveling and upon reaching Guatemala City. We will be staying here for two nights before moving on to the region where the Mayan people still live for the remainder of our time in Guatemala. 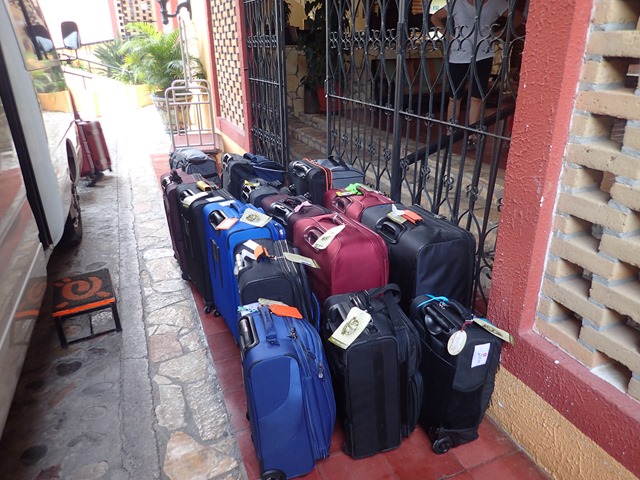 Don’t think I’ve posted a photo showing all the luggage this trip, so here it is. The blue and small black ones on this end are ours. Contrary to most of our other trips, most people seem to have packed lighter on this trip. Of course it being only three weeks in length may have something to do with that. 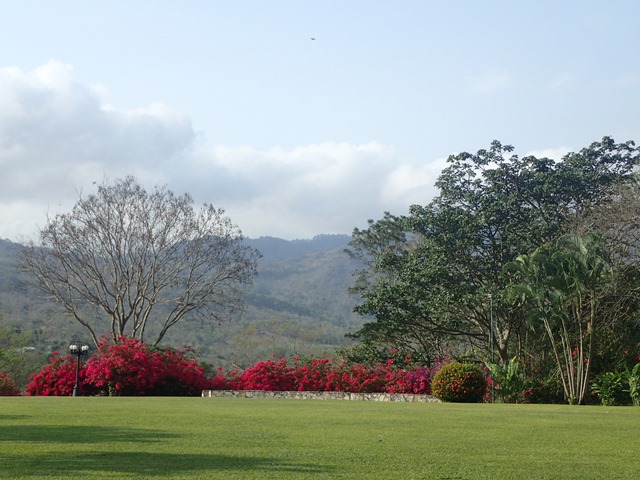 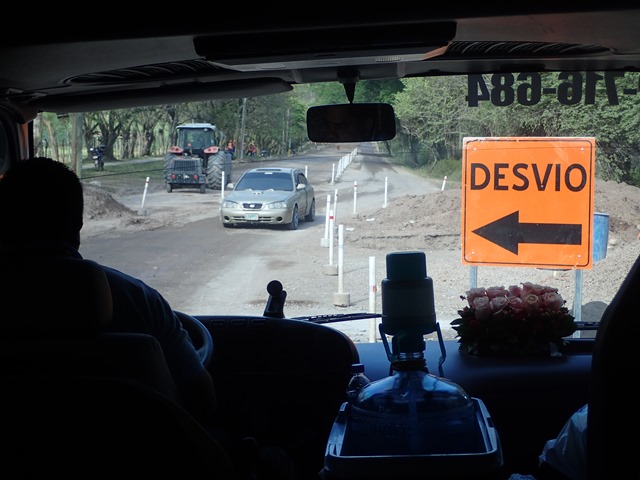 Road word here, there, seemingly everywhere. Richard and our driver, Dennis, were up where it was taking place and so we traveled more back roads missing the long delays and seeing more of the countryside and small towns. Lemonade from lemons. 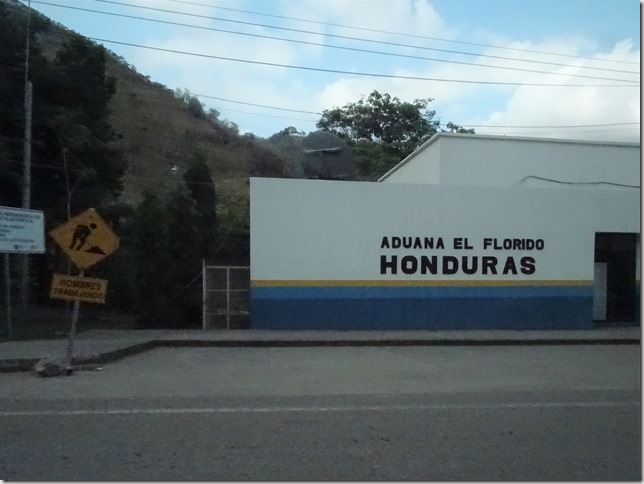 This photo sums things up very well. The Honduras Guatemala border crossing, but really counts is the yellow sign on the left side. You don’t have to know any Spanish to know what it means. 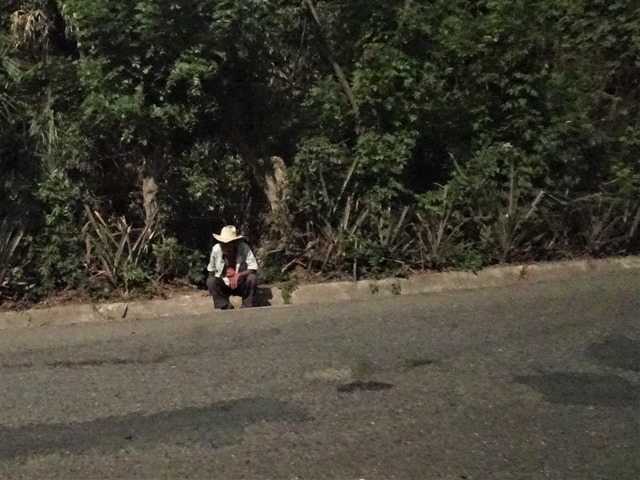 Common scene long the road. Guatemala is a very poor country, which is why so many people make the long trip to illegally enter the US. The money they earn is sent back to Guatemala, and it is a lot of money. Currently one billion dollars are sent back to Guatemala every month by relatives working in the US. Estimates are there are 2 million Guatemalans living in the US. Richard said that engineers, he was one, earn the minimum wage in Guatemala. English speakers earn far more. Hence a Guatemalan gang member who learned English and was deported from the US and is now working in a call center in Guatemala City earns far more than college trained engineer. No wonder Richard is no longer practicing engineering, but is instead a guide for American visitors. Getting more education does not insure success as much as learning English on the streets. And you think we have problems in our country. 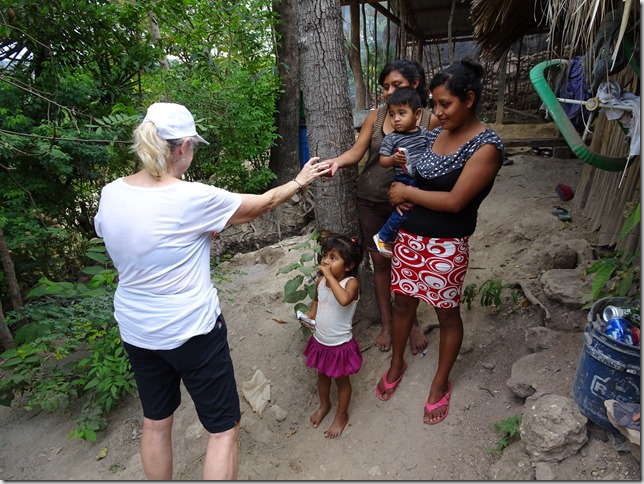 A stop along the way at a very poor village. The village has running water. The water runs for 2 hours one a week. Linda giving out some of the things we bought at the supermarket a few days ago as we were leaving San Salvador. Richard said he discovered this village a few years ago. The people tend to be transient and extremely poor, which gives his tour groups a good introduction to the problems facing Guatemala. 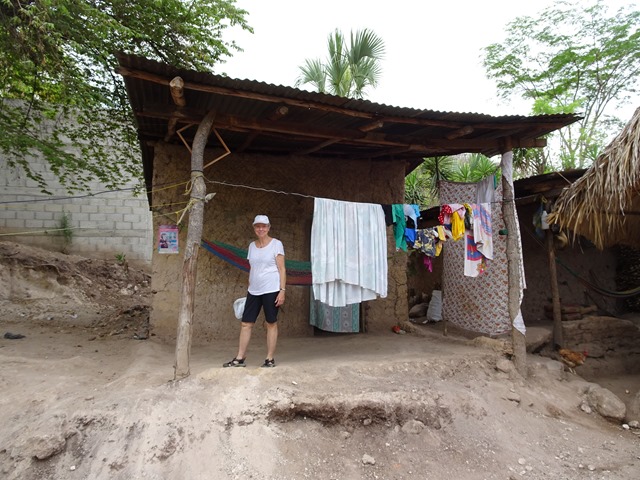 One of the houses in the village. The average number of years a child in the rural areas of Guatemala attends school is 1.8. Yes, they on average attend school for less than two years. Our solution would be to tell them to stay in school, but when someone with this level of schooling, but with a good command of English can earn more than a person with an engineering degree, the argument falls flat, especially when you realize the schools do not teach English. 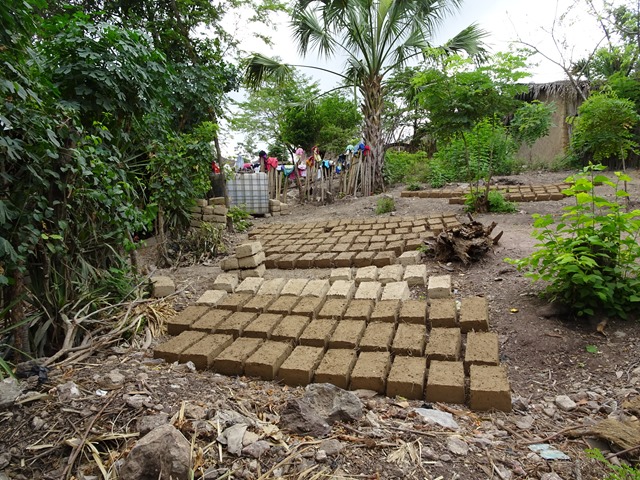 Adobe bricks drying in the sun. The easy way to tell if someone has a relative that made it to the USA is if they have a brick house. Their relative has a good job in the USA if they have  pickup truck. With a pickup truck in Guatemala they can haul goods and people earning money from that. Defying the odds and successfully entering the US can completely change the their life and also their family’s life. Slowly we begin to see the reality of why so many people from Central America illegally enter the US. 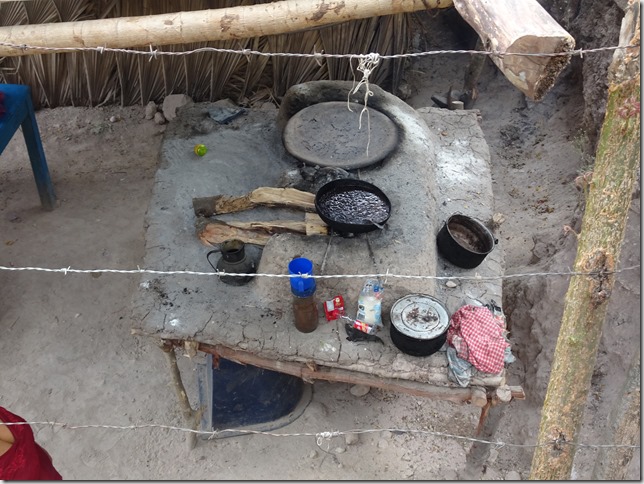 A pot of beans, their only food for the day. There is no welfare in Guatemala. $3 a day earned doing laundry for someone a little better off than you may mean the difference between eating and going without. It’s not that they don’t want to work, it’s that there is not that much work and work often pays very little. That’s why it is very easy for them to find work if the successfully make the border crossing into the US, they are very hard workers, the kind of workers employers in the US want. 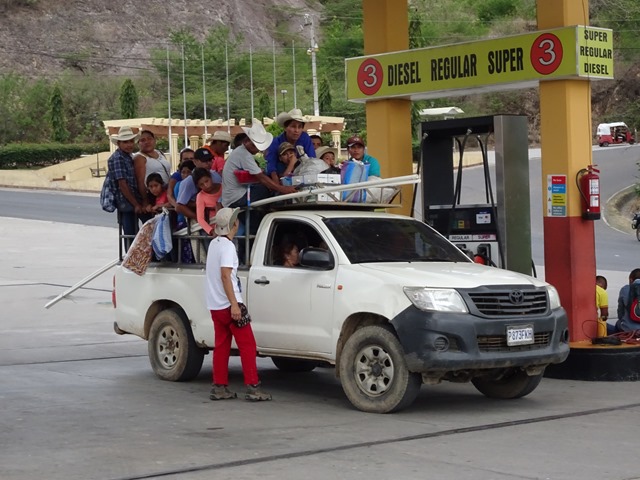 Why having a pickup truck is important. 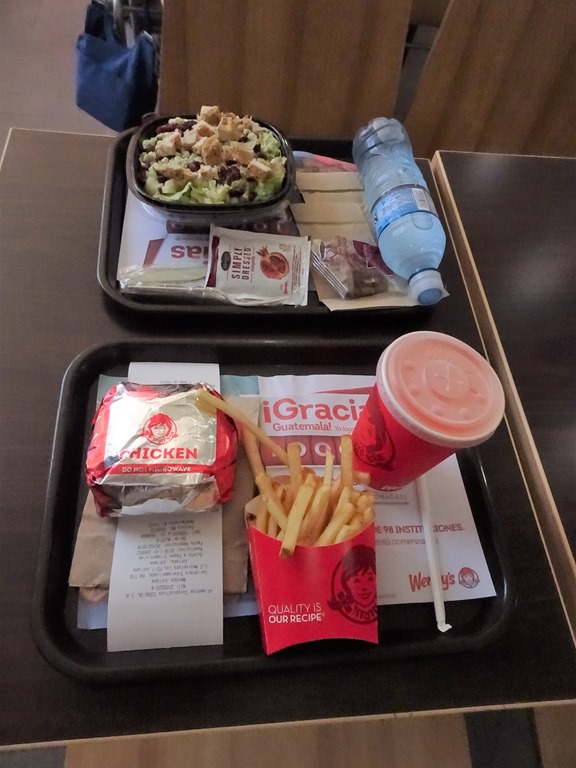 The first and only time we have ever eaten fast food while traveling overseas. Linda had the salad and got sick this evening. And this was at a Wendy’s. It was just a reminder as to why we prefer street food. 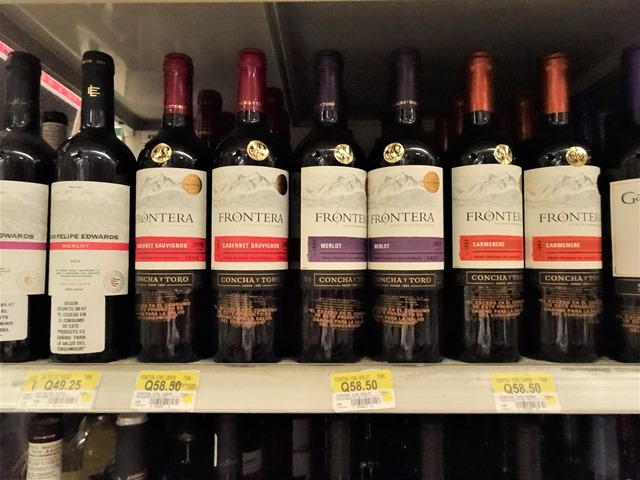 750 ml bottles of Frontera wine. The exchange rate is 7.40 Quetzal to the dollar so the cost per bottle is $7.90. That includes all taxes. 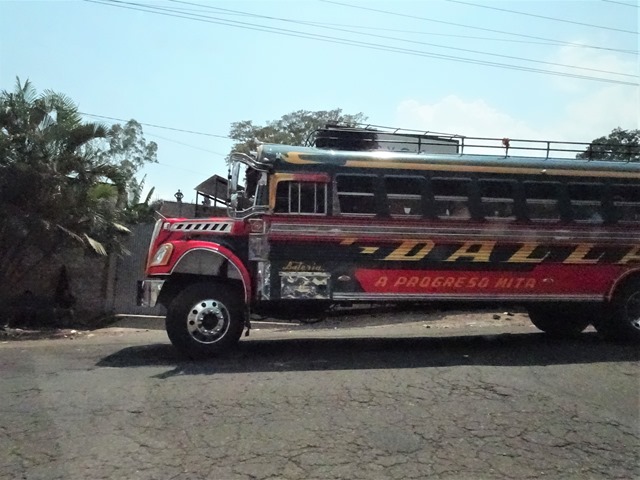 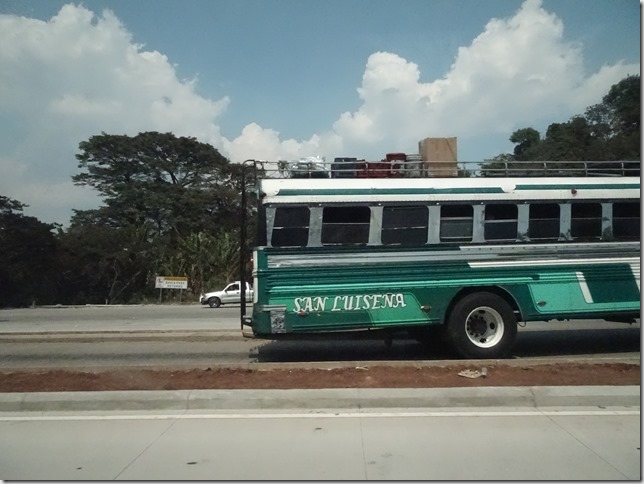 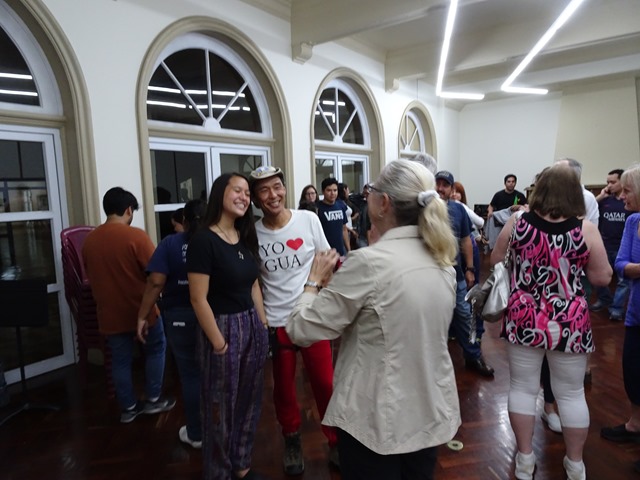 A real treat this evening. Richard’s very beautiful and talented daughter sings in a choral group. We got to attend a practice session and listen to some totally awesome music. This group of young people are unbelievably talented. Their director is an inspiration to the them and he to them. He gets a small income from directing the group, works as a music teacher and also sells insurance to earn enough money to support his family. Once again, having a college degree in Guatemala does not mean economic security. 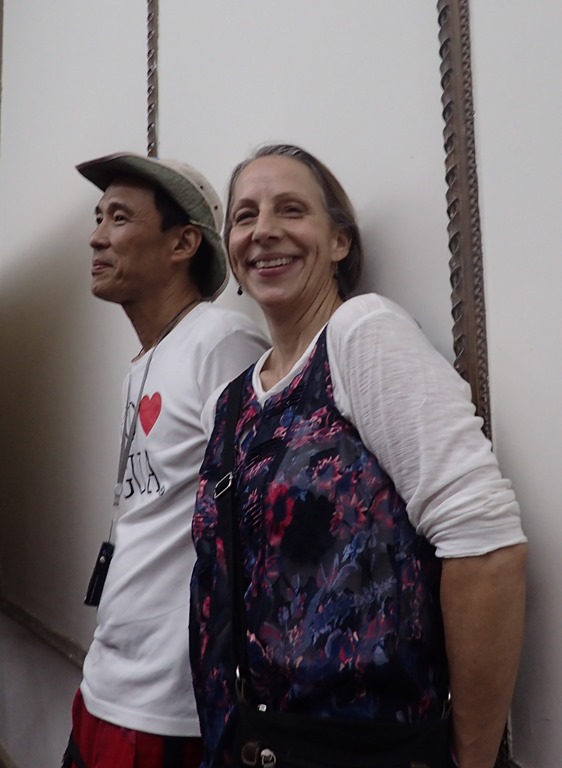 Richard’s wife, Susanne, was also at the practice. Their daughter is their fourth child and only one born in Guatemala. A life well lived is the best life.