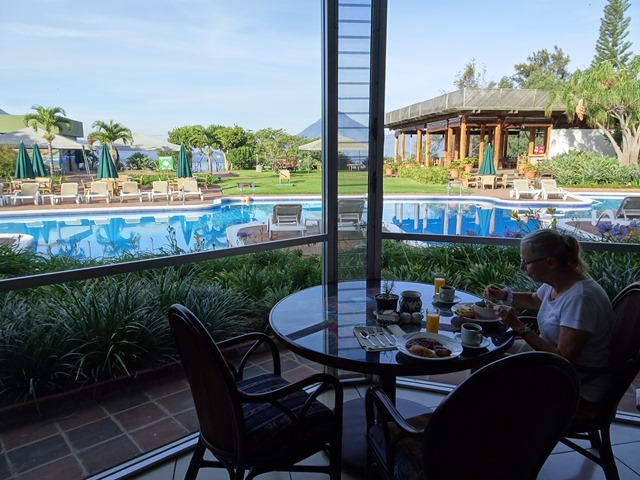 Awesome view for breakfast this morning. Unfortunately there was no way to include both the beautiful model and the volcano in the photo from where I had to take the photo. You can see I know what is important. Well Trained Bob. 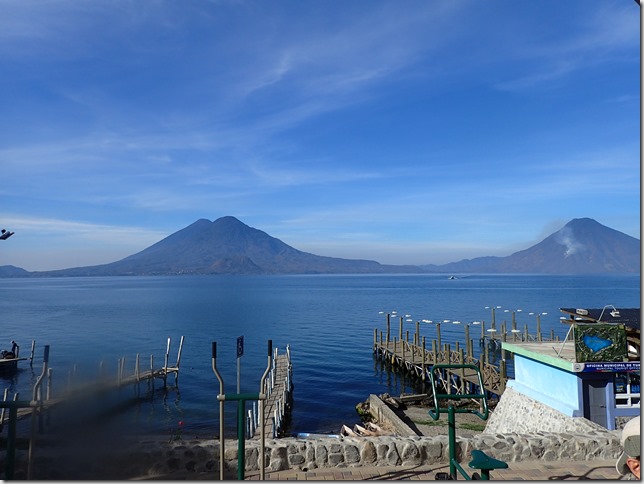 The lake we are staying beside is in the huge caldera of a giant volcano that explosively erupted 85,000 years ago. It is so large that it was only in the 1990’s that scientists finally realized it was actually a caldera. Those volcanos in the distance are actually inside the caldera. 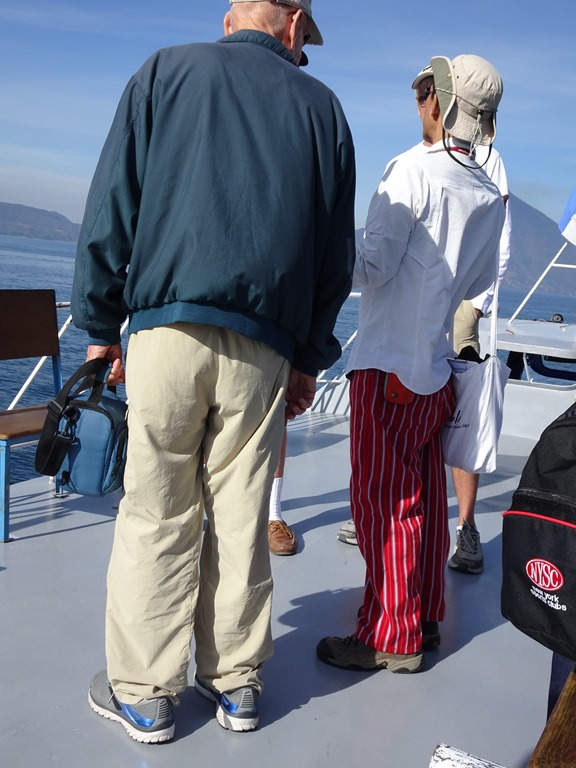 Richard’s pants for the day. Each day they are different. He buys used Mayan fabric and has it sewn into pants. The pattern was and still is used by the Mayans to denote the village or town they are from. It is even simple things like this that make Richard so special. 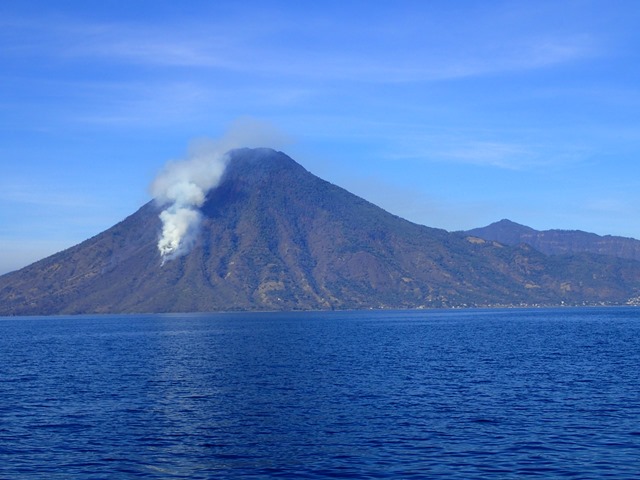 Fire from the volcano. Not an eruption, just a wildfire burning on the side facing us. 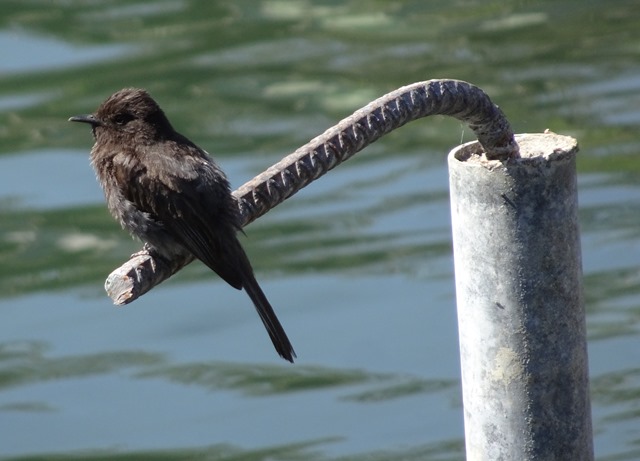 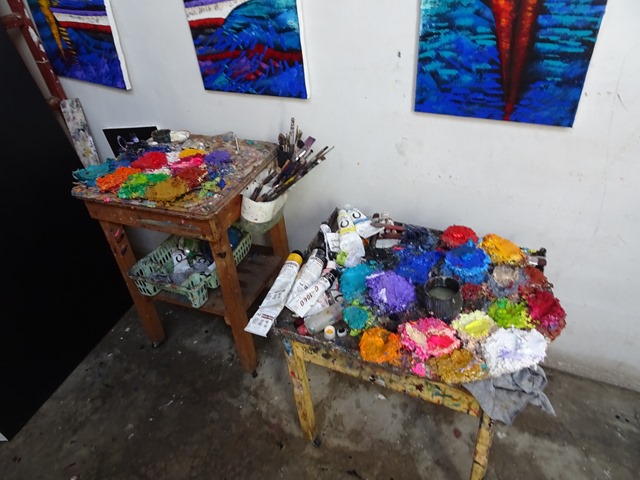 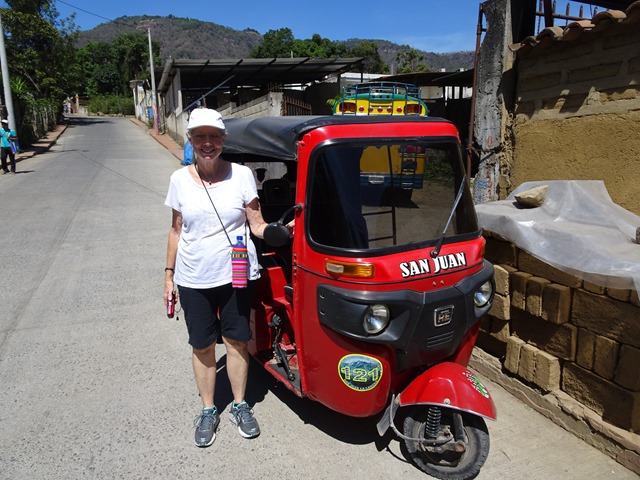 Model beside tuk tuk. Did you know that even though tuk tuks are not designed to hold three Americans, it is possible to fit three Americans in one. But is it ever a tight fit. 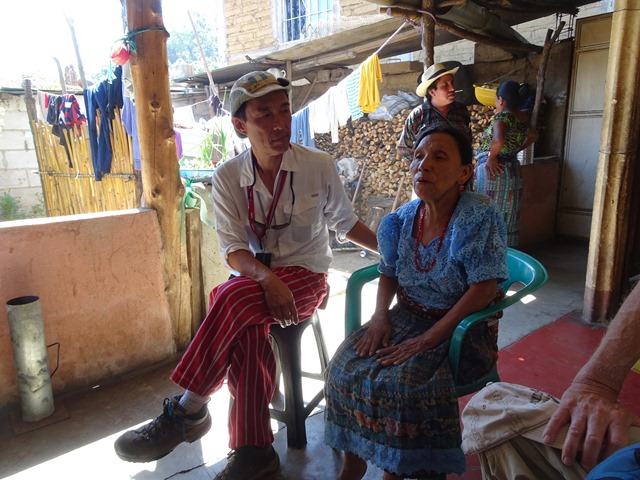 Mayan midwife. They are “see’ers” and if they receive “the vision” at the baby’s birth, they can foretell the baby’s future. 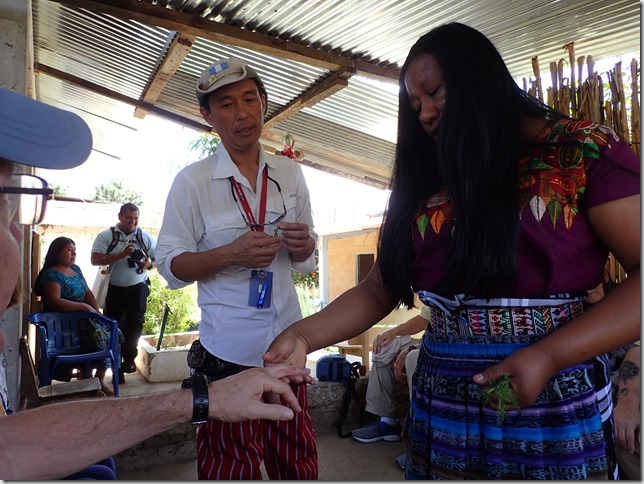 A herbalist determining what would improve the movement of my finger. Linda bought a large container of Arnica cream. Haven’t used any yet. it will be interesting to see what will happen. 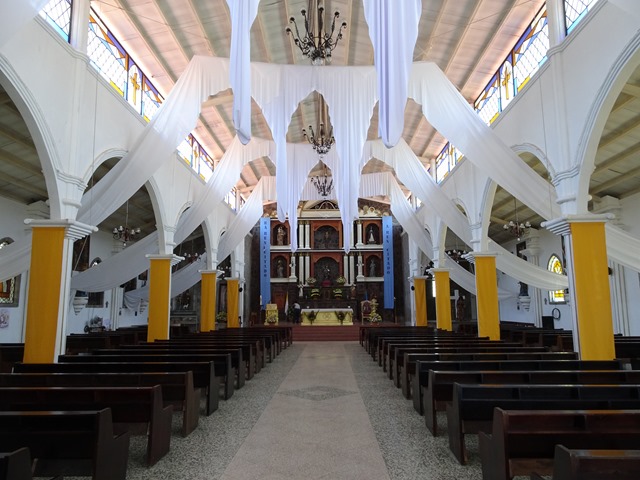 We have enjoyed spending a few minutes looking at the churches on the square of the towns we have visited. Some are simple, some more ornate and others are decorated like this one. It sure beats spending what seems like forever in one while a guide drones on and one. Thank goodness Richard isn’t like that, he leaves what we want to do up to us, but will answer questions if we have them. 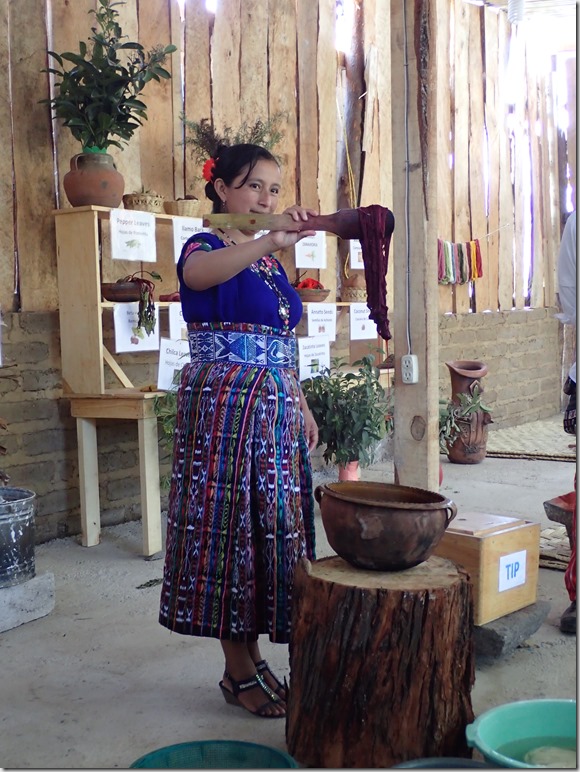 The town we visited was known for its hand made textiles. We were treated to demonstrations of the different steps in the process from taking the seeds out of the cotton to the finished woven product. It was interesting learning they only use natural dyes to color the yarn. Beets give red, rosemary gives green and chamomile gives pale yellow, plus there were many, many more. 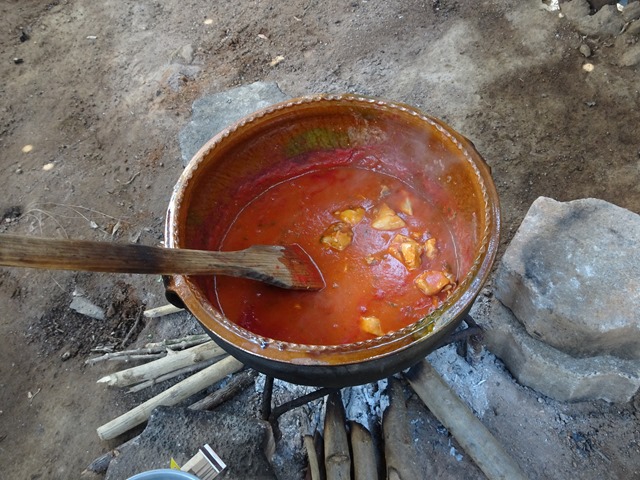 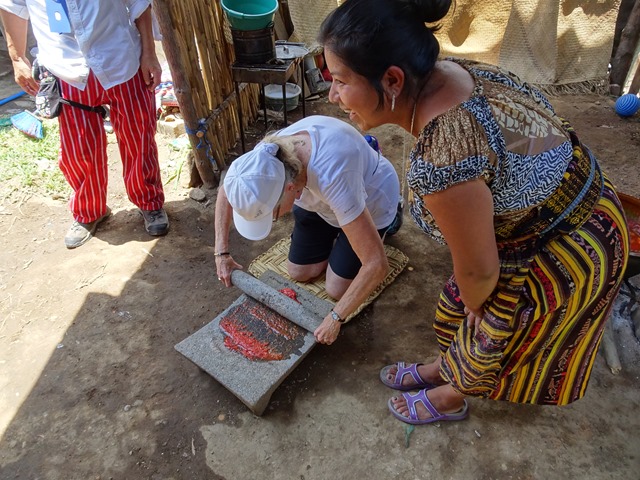 Linda pureeing tomatoes the Mayan way. She got the job done, but her technique wasn’t quite up to the Mayan method. 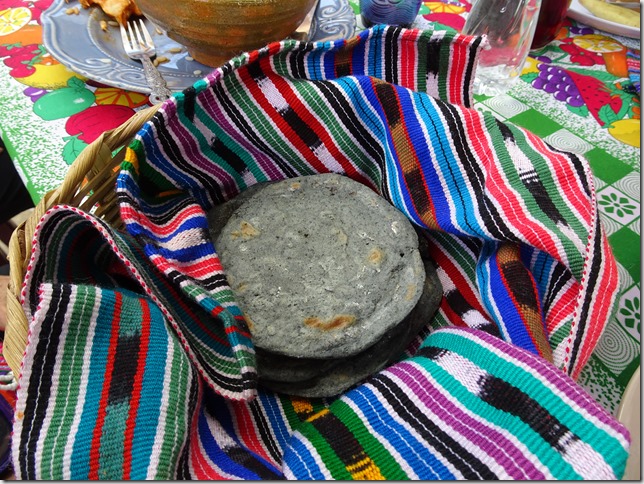 Mayan blue corn tortillas. Blue corn flour mixed with water, and nothing more,  placed on a hot griddle over a wood fire. The basket was empty when I finished. That chicken, sauce, rice, beans and squash, plus four glasses of jamaica made me a fat and happy fella. 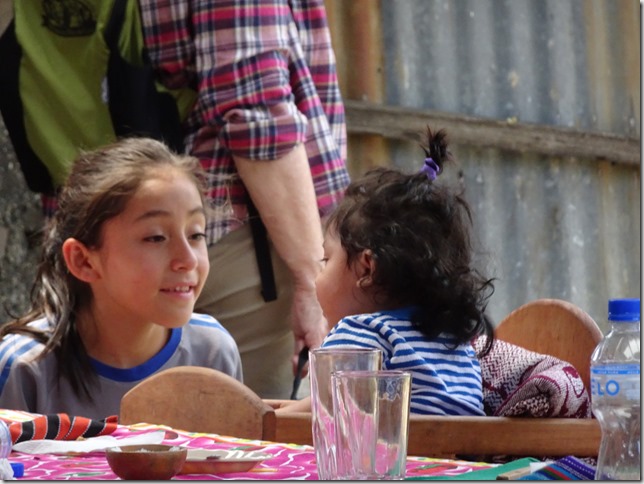 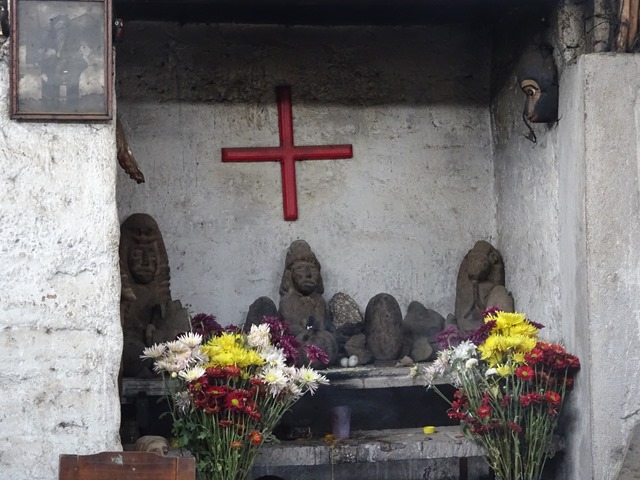 Mayan cross. Let’s just say their religion was there first. 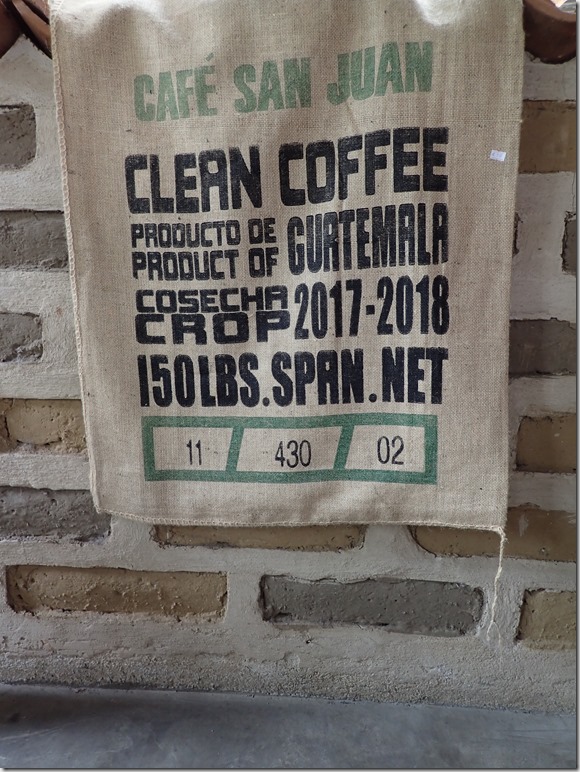 Linda was laughing at this when she took the photo. It was something about coffee normally being dirty, or something like that. Or maybe it was how to do clean coffee. Whatever it was she thought it was funny. Baffled Bob. 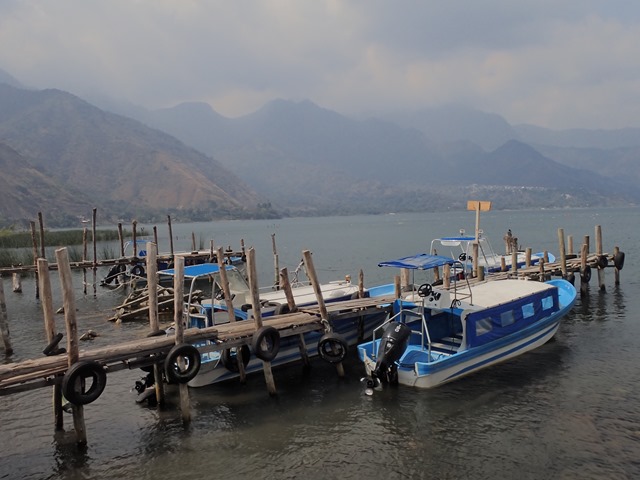 It’s a heavy Linda day. She liked this photo she took. When she shows them to me after she takes them I am astute enough to know it is a not so subtle hint to include in the these posts. Smart Bob. 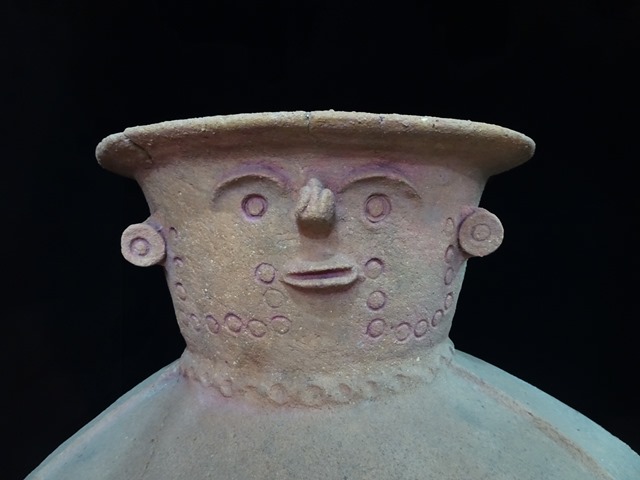 Top of a Mayan pot recovered from an archeological site in the lake. The Mayans, past and present are an awesome people. The more we travel the more we learn what we didn’t know.