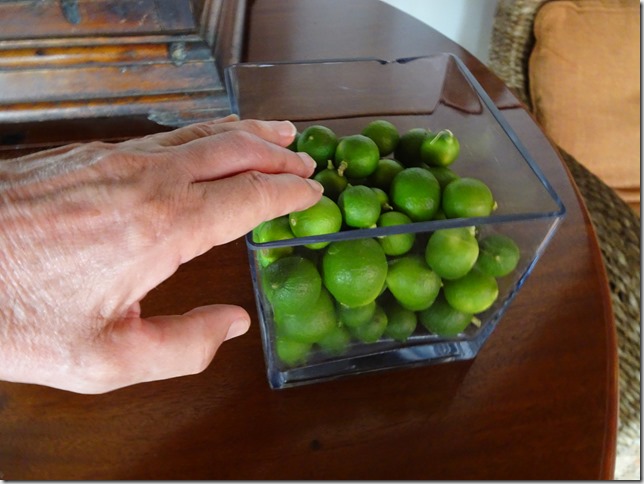 Food lesson. In the US we call these Mexican limes. In El Salvador that is a no-no. They have a local name, which neither Linda nor I can recall, so we just call them Salvadoran limes. Just as loaded with juice as those little limes by that other name. What ever the name, it is why we long ago stopped buying the big Lisbon limes that we grew up with. 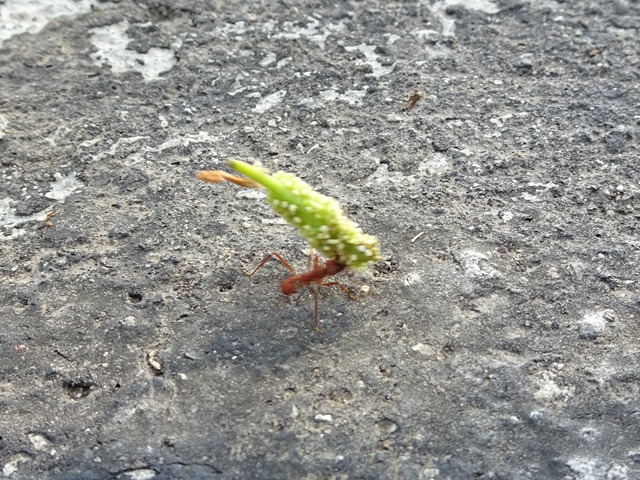 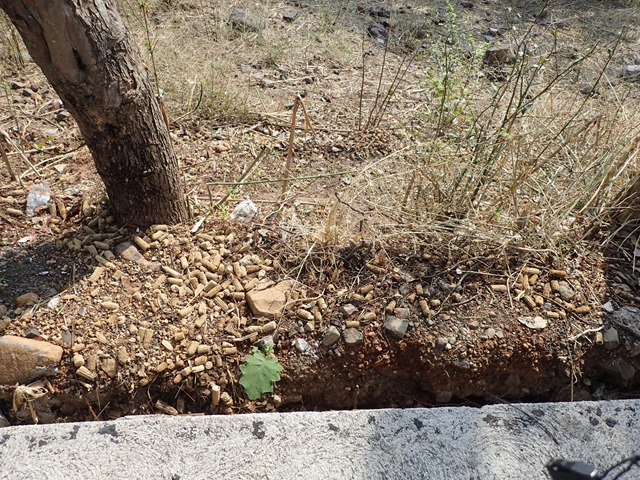 Corn cobs along side a road, but there is more to the story. Many years ago the government paved this road out in the country. The locals noted there was very little traffic on it, Noted how uniform and clean it was compared to the rutted dirt it covered up and said, this is what we have needed for a very long time, a nice place to dry our corn and beans, So they do. Because it is just at the start of the rainy season, the beans and rice are gone but some evidence remains. 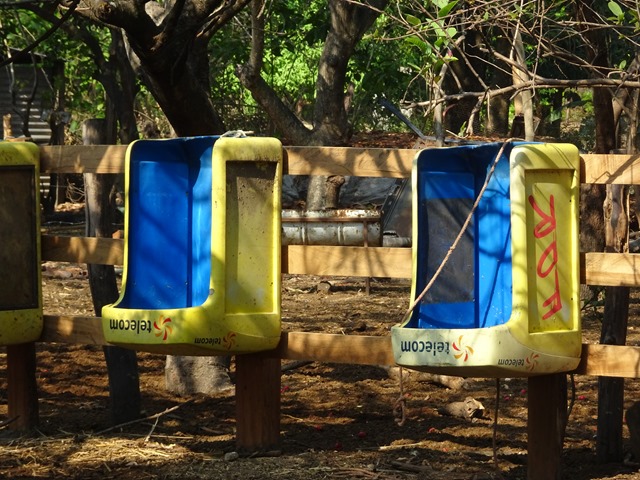 Upside down pay telephone covers on a fence? 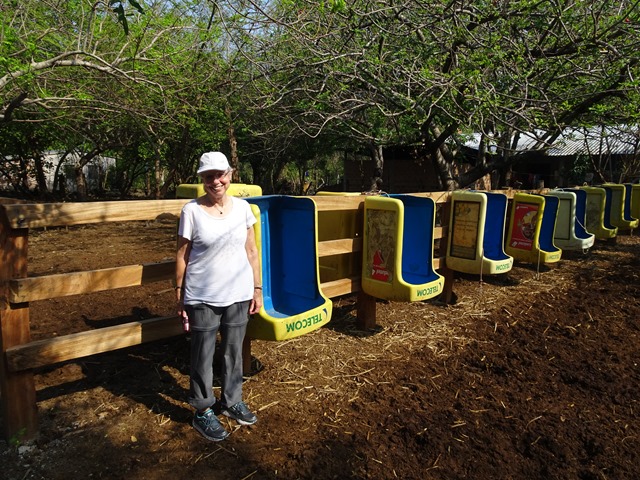 The former farm girl knew instantly what they were. And she brought cow patty covered shoe soles when she walked away. 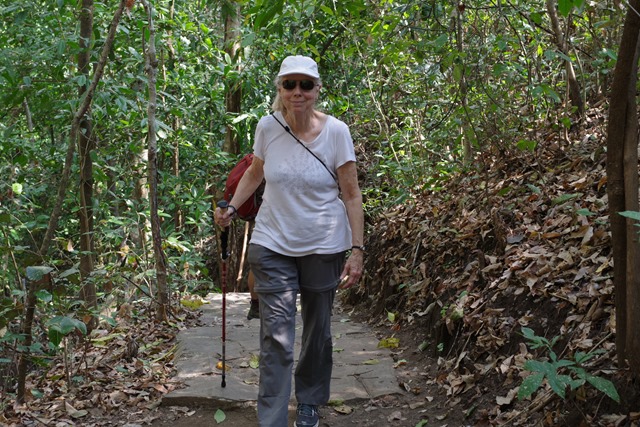 A walk in the woods? Hot, humid, and ever worse as far as Linda is concerned, seemingly more ups than downs. Today was history day and there was history in this area. Some forty years ago there was a terrible civil war fought in El Salvador. The military government and wealthy landowners on one side, the poor people on the other. One guess as to which side the US supported. Why does our government forget that other people around the world want the same thing the revolutionaries in our country wanted when we fought the British. 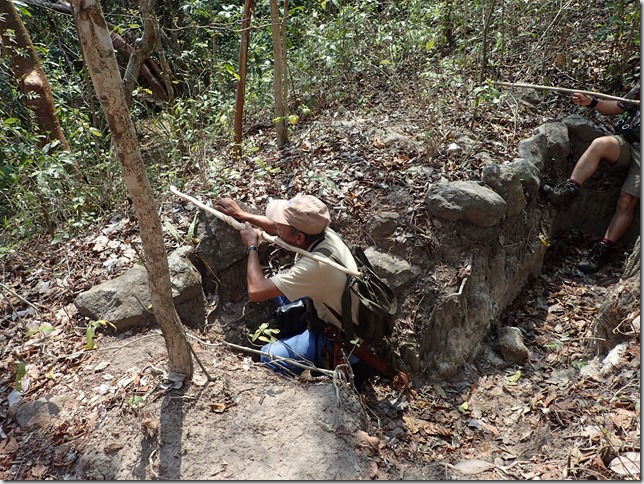 We spent time up here with a 61 year old man who at the age of 16 joined what was known as “The Guerrillas”. His reason at the time, while in the capital city, San Salvador, the military beat him. Several years later his sister also joined the guerrillas while his brother joined the government forces. Since then his brother has had nothing to do with he or his sister. The war not only tore apart the country, but also families. Eventually both sides realized neither was capable of defeating the other and a peace agreement was reached. Today the war is becoming  a distant memory with Salvadorans as well as visitors realizing what a wonderful place it is with the potential to become far greater. 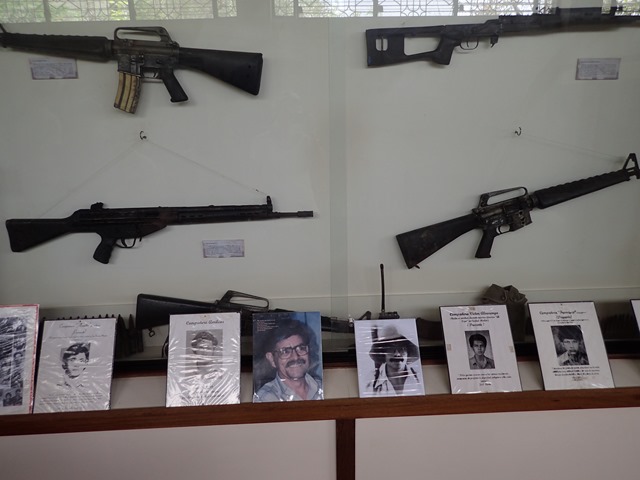 One last mention of the war. A display of a handful of the 100,000 “Disappeared”. No one knows what happened to them, both sides committed these acts. With the end of the war some things changed and some things didn’t. Time to go back to ancient times when the leader of the country personally lead the troops into battle by always being in front of the troops. Time for America to lead the way in this concept. 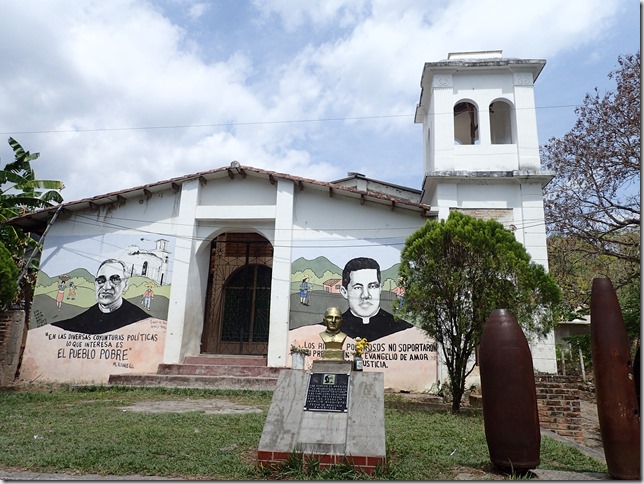 The church in Cinquera, which was a stronghold of guerrilla resistance during the war. In an attempt to disrupt the guerrillas, government troops completely destroyed the town leaving only one house and the steeple of the church standing. Today the shells of two bombs are struck by rocks to call worshipers to Church. A rather unique way beating swords into plowshares. 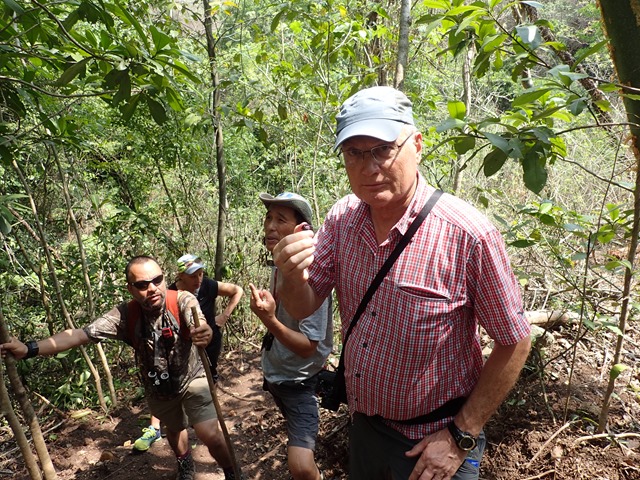 Walking along this trail our guide pointed out some fruit laying on the ground. Picking one up, eating it and saying how good it was. Linda and I both ate one. It was as good as he said. Later we stopped along the road and Richard and Ben picked some wild plums. Again Linda and I both ate one. I handed my pit to Linda to throw away and she managed to hit Ben in the ear with it. There are many things I could say about this, but I have learned over time that some things are best left unsaid. Smart Bob. 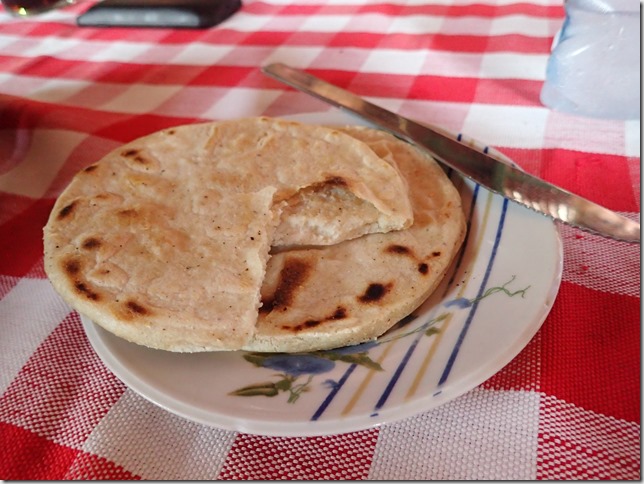 The tortillas in El Salvador are very simple, white corn meal and water. They are quite thick with a wonderful taste. Already we are hooked on them. Simple is good. 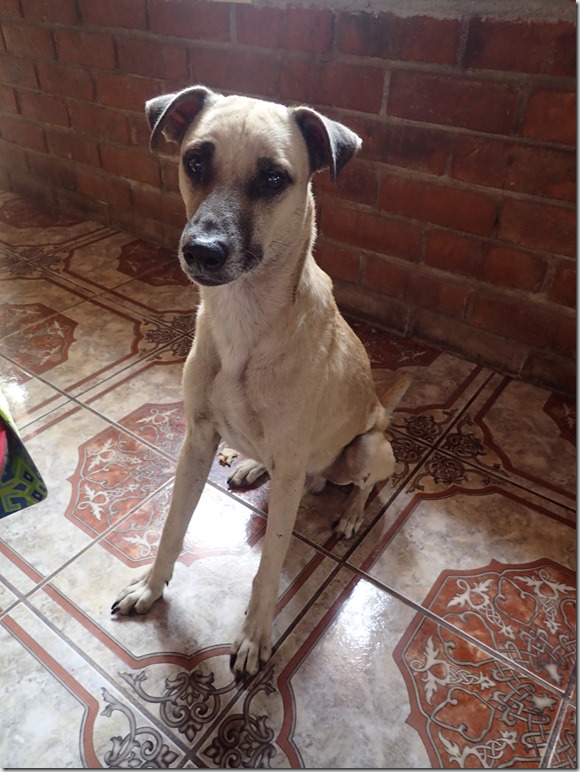 Beggar dog at our lunch in Cinquera. We discovered he had standards when it came to feeding him table scraps. Chicken meat was okay, tortillas were not. Chicken bones were okay, french fries were not. Oh, and chicken skin was also on the acceptable list. Who says beggars can’t be choosers! 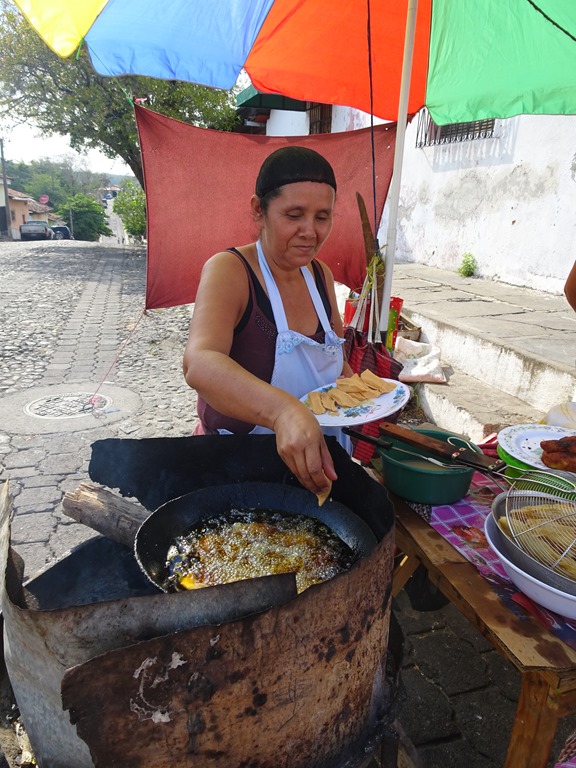 Given choice we choose street food. 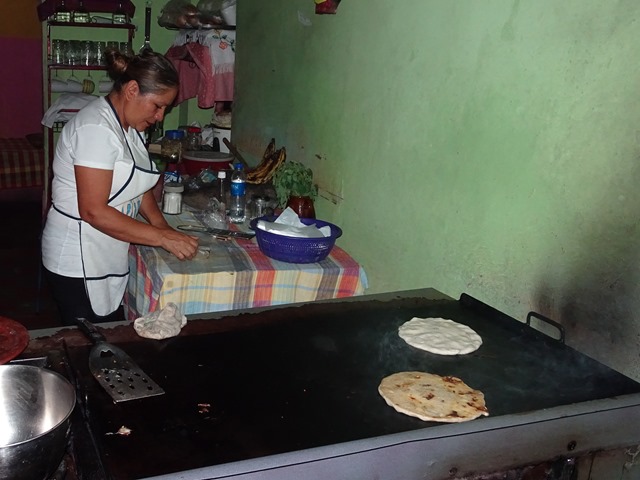 Our evening meal was pupusa at a hole in the wall pupuseria. A pupusa is a filled tortilla. The traditional one is filled with cheese and beans, but there are a small number of other ingredients you can also have such as jalapeños, mushrooms, chorizo or minced pork. 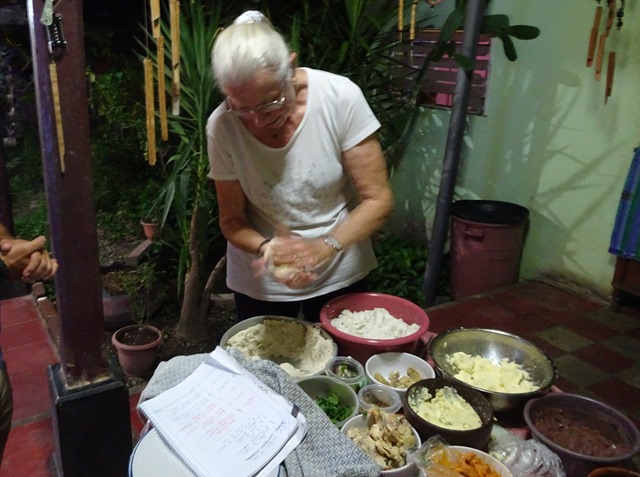 All afternoon Richard and Ben joked about Linda having to help make pupusas. Guess what, they weren’t teasing, she really did get to make them. For not having done it for over twenty years like the owner of the pupuseria has, she did a fantastic job. If we ever want to retire from our current jobs, we could relocate to El Salvador and Linda could open a pupuseria while I lay in a hammock all day reading and occasionally writing. In your dreams Bob, in your dreams. But do you know, those dreams would be filled with the smell and taste of Linda’s awesome pupusas. Lucky Bob. Happy wife.