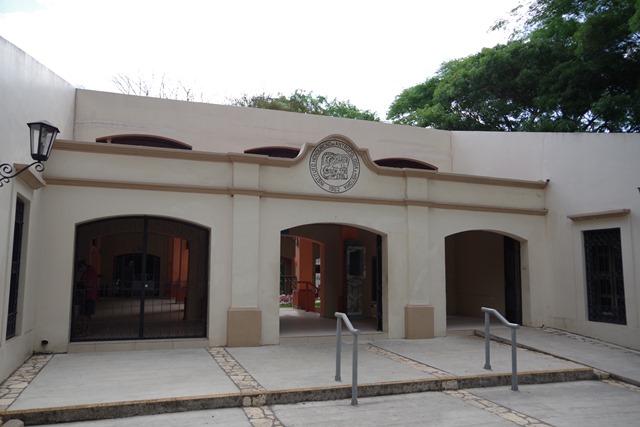 The unassuming entrance certainly does not reflect what lies beyond, Xukpi the ruins of Copan. 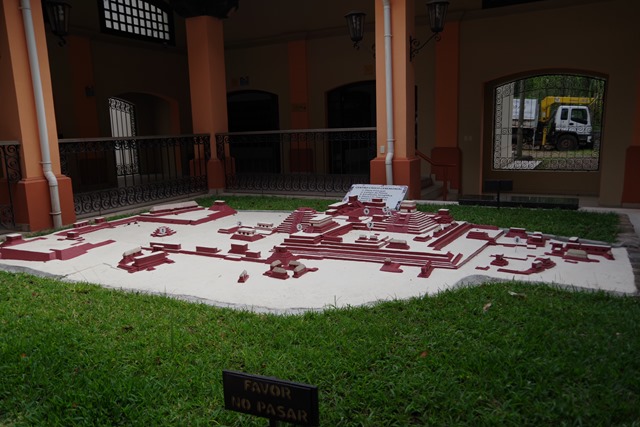 Xukpi, a World Heritage site, is the most elaborate of all Maya cities, so it is known by the title “Athens of the Mayan World.” The ruins have been reclaimed from the forest and partially rebuilt so visitors can view the splendor of what once was. 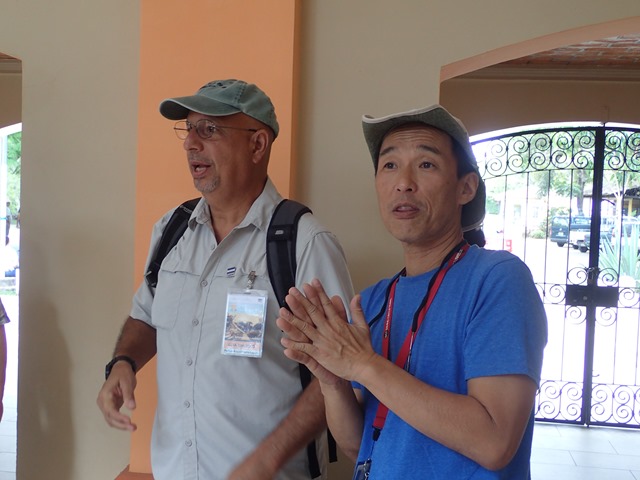 With Richard having his hands full  with our group going off in different directions all the time, think of herding cats, we had a site guide, Mike, to give Richard time to keep the group somewhat organized. Given that we were at the site most of the morning, the amount of information imparted was overwhelming, but through repetition some of it finally began to sink in to my brain. There was way more to the Mayans than just some some edifices. 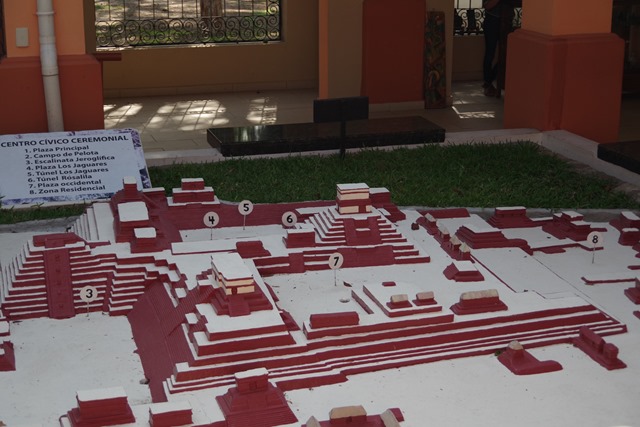 Each number marks a different area of the city, and we visited and learned the meaning of each, including the numbers you can’t see because I zoomed in too tight with the camera. 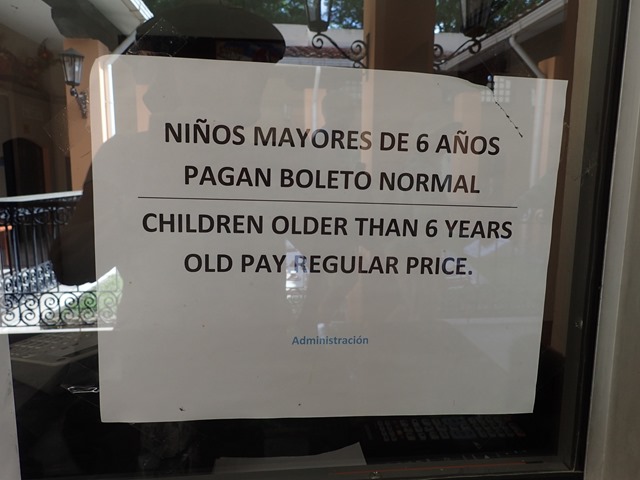 One of those things that shows up in the images Linda takes that I never saw. I can’t imagine preteens getting much from the site, but then  not being from Honduras, neither can I full appreciate the significance it has to the people of Central America. In the USA our forefathers did their best to obliterate many traces of the indigenous peoples of of our country. 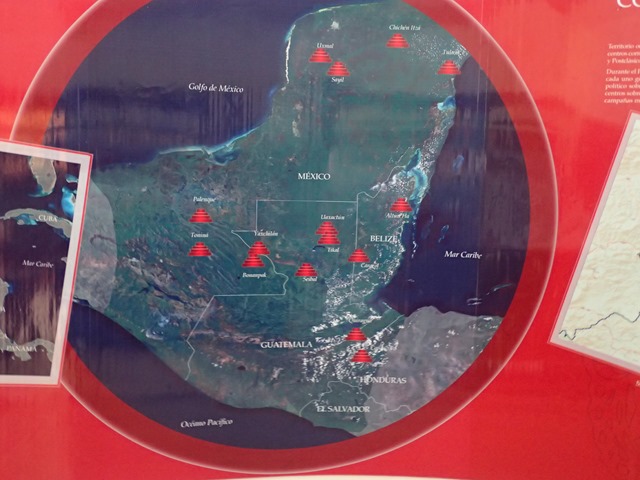 At the height of the Mayan civilization the population was in the many tens of millions. Think of cities with populations of over100,000 people around the time of Christ. And just like where we are headed, over population and decimation of resources did them in. 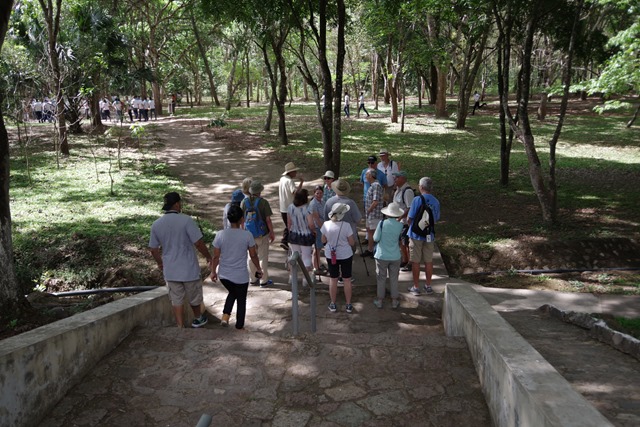 Our group ready to venture out in the park, no ruins to be seen. 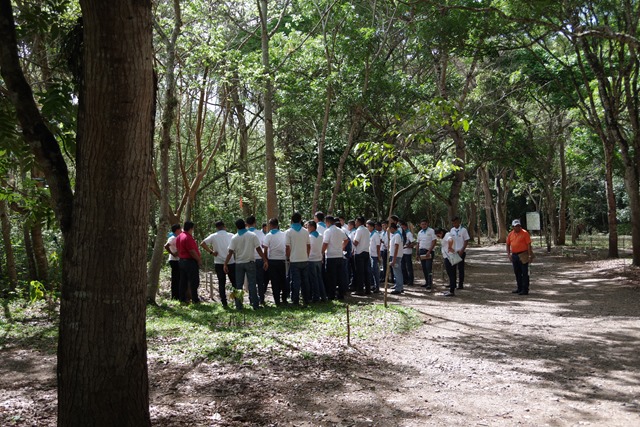 We weren’t the only group in the park. Besides the usual visitors, there were five groups of high school students visiting the site. They came from Belize, leaving at 2 AM in their school buses and traveling all night. The trip cost each of them $125 and there some 250 of them in five groups of around 50 each. Richard said the nearby town of Copan would be party central tonight as they spending the night there before returning home on Saturday. Fortuitously our hotel is located some distance outside of town. On the other hand, wasn’t it fun to be young. 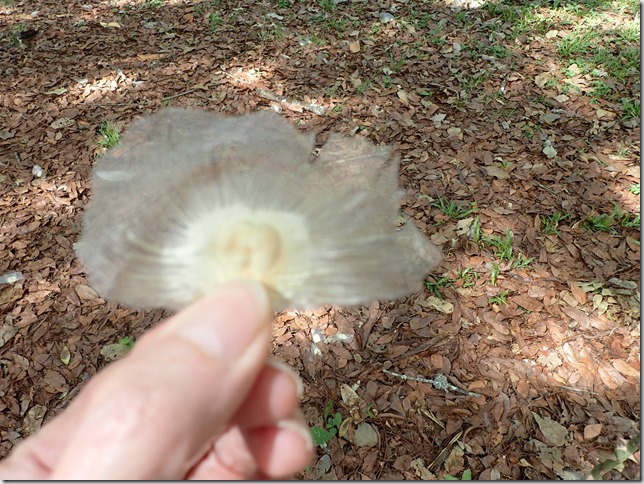 Linda’s attempt at taking a photo of an unusual tree seed that glides down to the ground from the tree. Photo and fingers by Linda 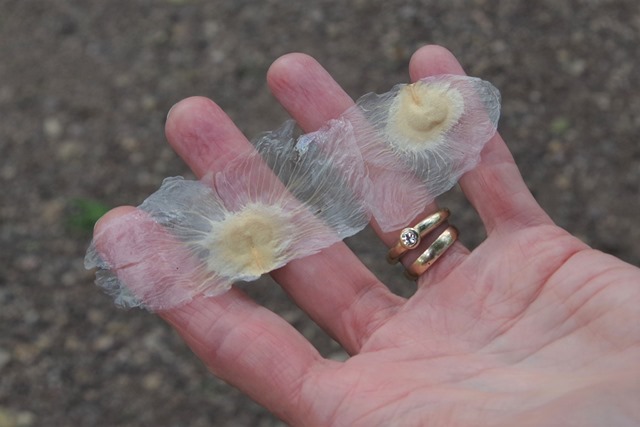 Photo by Bob, hand by Linda. Posted merely to show that the things she is not perfect at are very minor indeed. Lucky Bob. 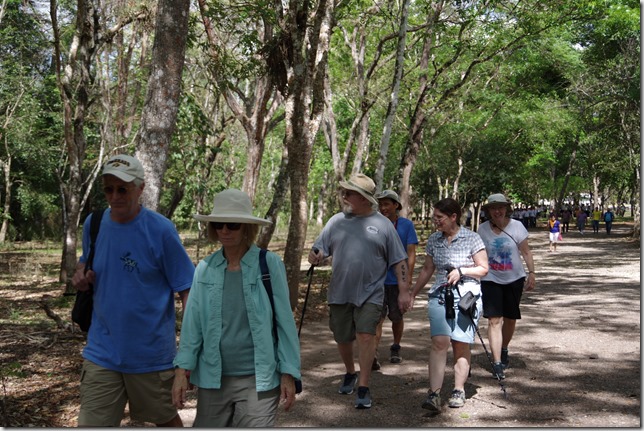 Off to the ruins. 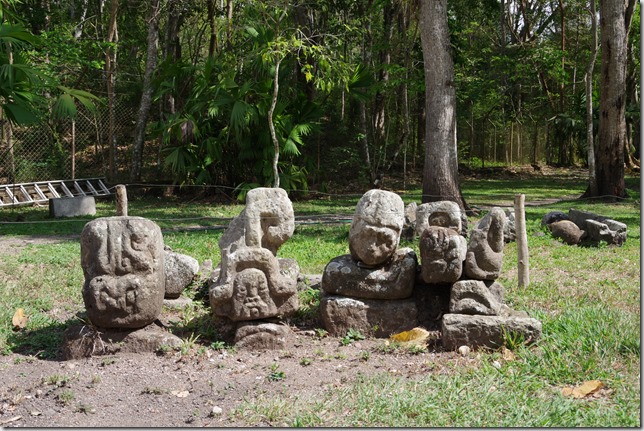 If there is a canopy covering them they are original, no canopy means they are a copy and the original is in the museum or elsewhere. 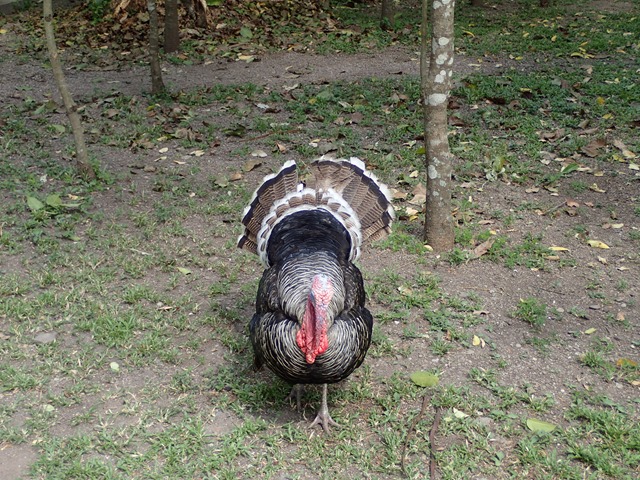 They are not native birds. Linda called it an attack turkey as she had to wave her walking stick at to stop it from coming towards her. 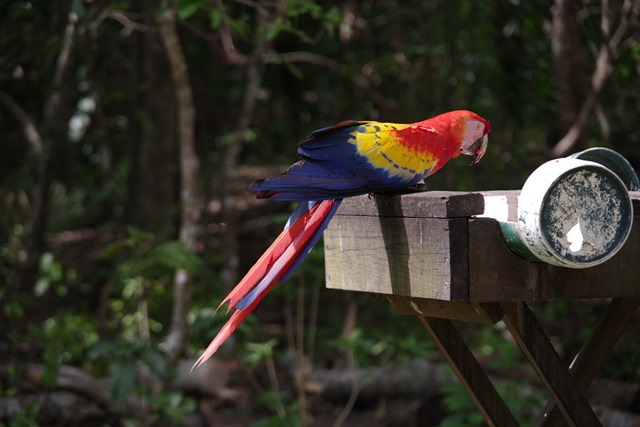 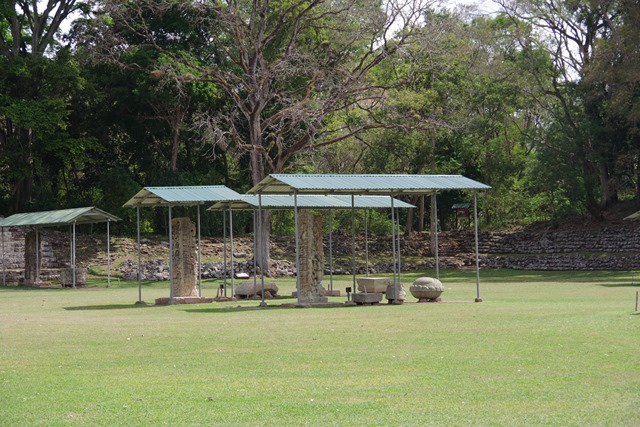 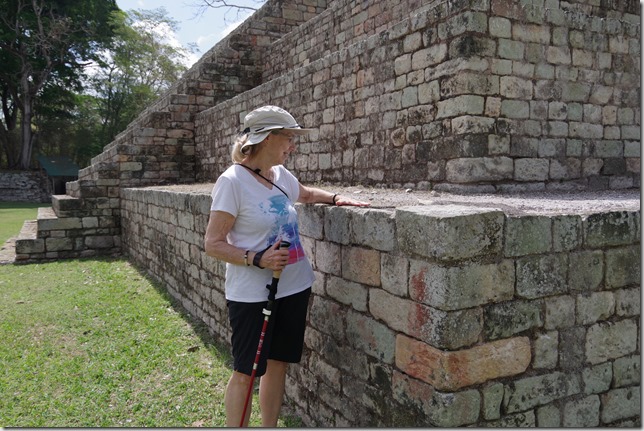 Linda’s first touch. Happy wife, Happy Bob. She was the one who really wanted to see Mayan ruins and today she gets her wish. 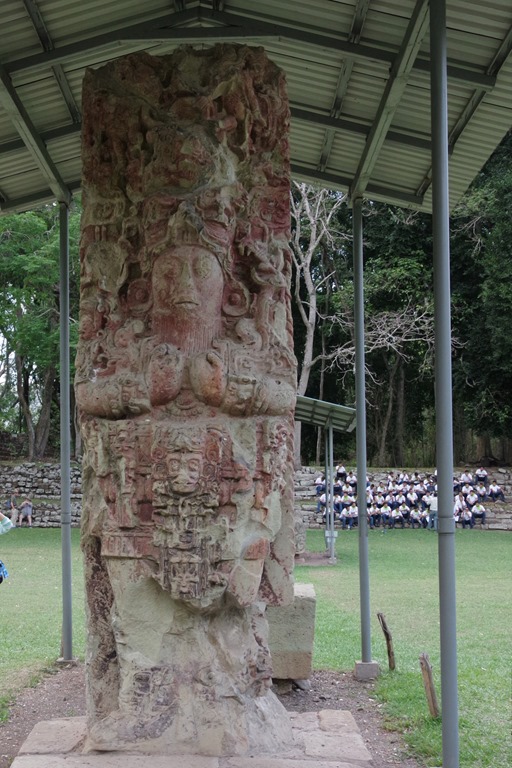 It even has some of the original red paint. 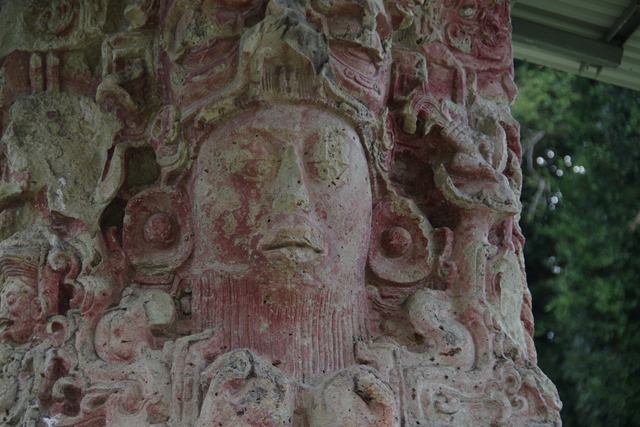 Close-up of the head. The beard is very unusual. 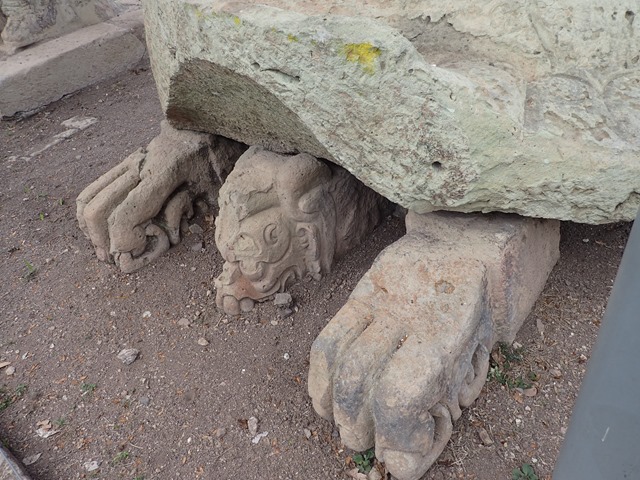 Stone turtle. Has to be a Linda photo. Reason: the feet are featured. 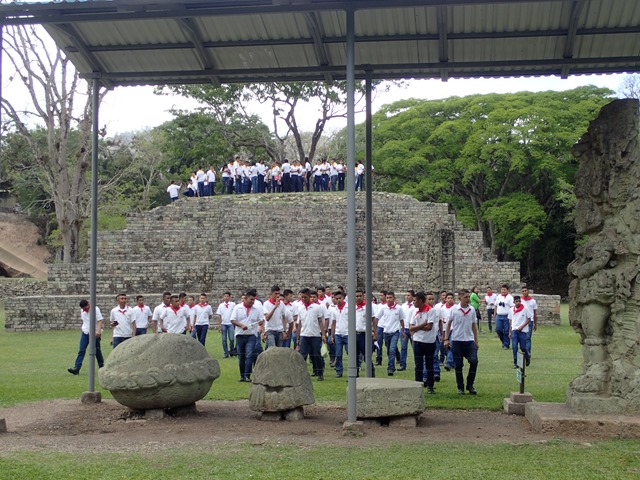 Linda told me several times why she took this photo. I know if I leave it out I’ll end up wishing I had. Why she likde it: the two white lines. 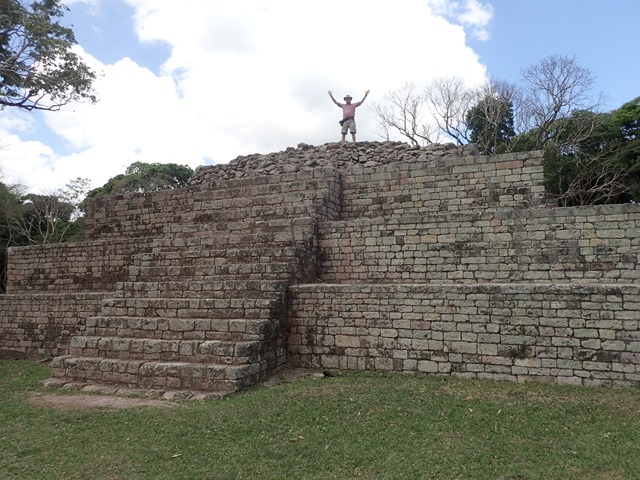 It is far steeper than it looks. You don’t see Linda climbing it do you? 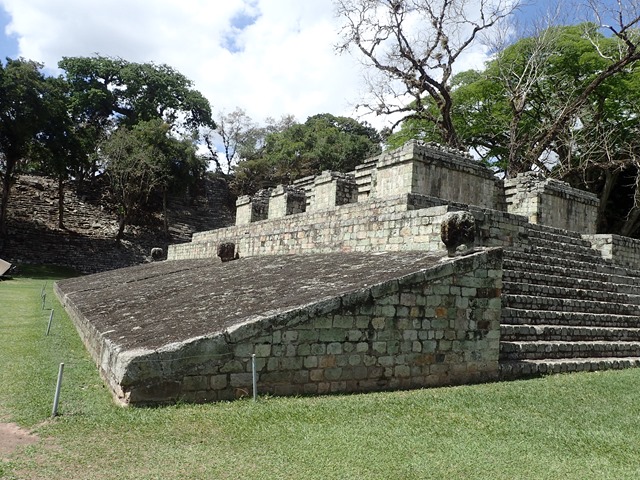 Part of one of several ball fields. 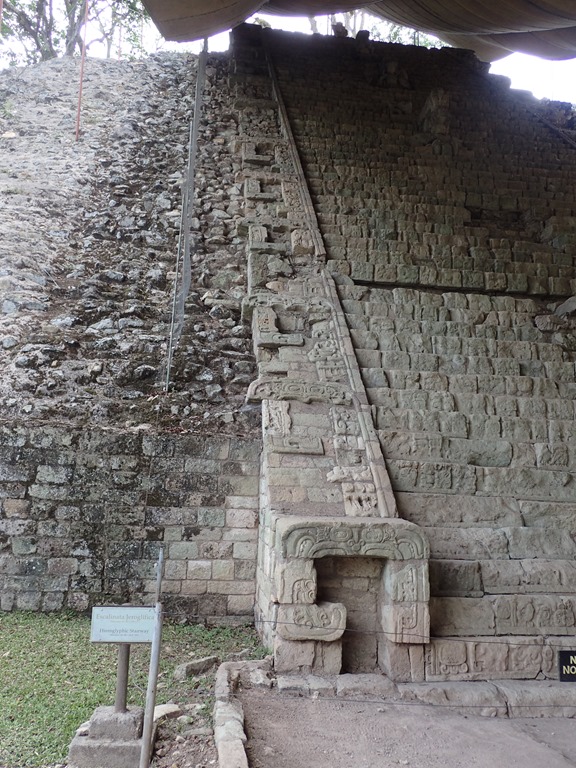 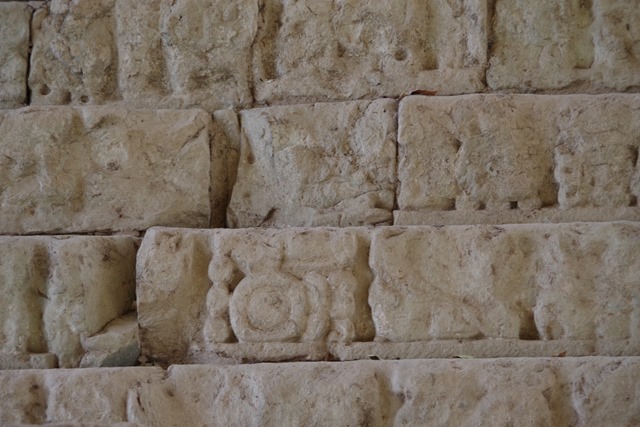 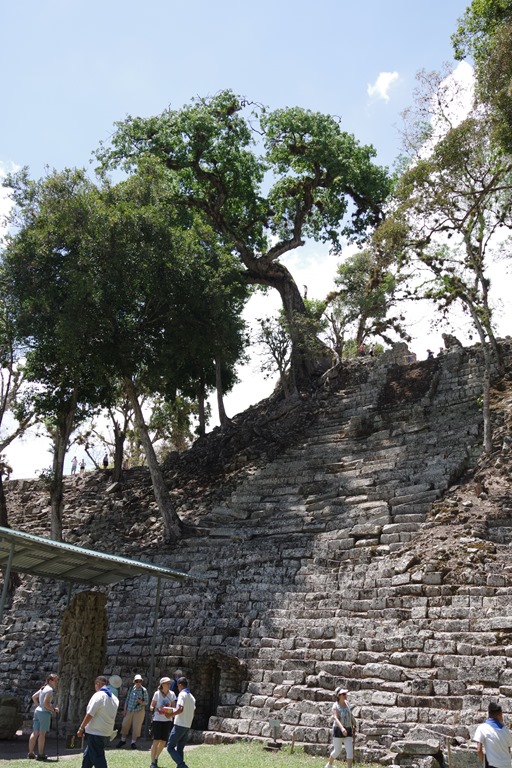 Just as in Cambodia, their are trees growing out of the ruins. Their roots are so intertwined within the ruins that to cut the tree and attempting to remove the roots seriously weakens the structure. Now they leave them in place. 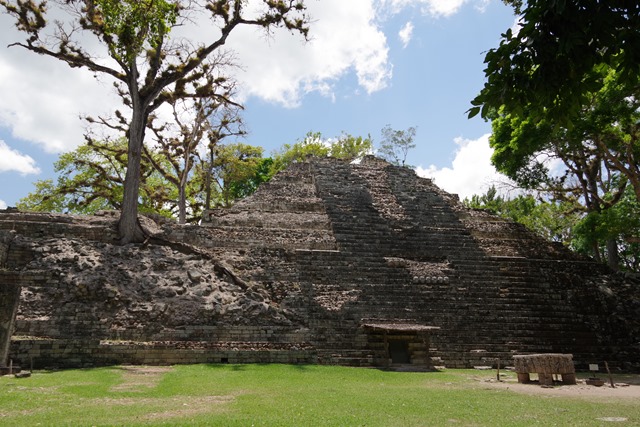 The outer portion to the right has been reconstructed, the left remains as it was. The Mayans built atop their previous structures. Archeologists have dug almost 3 miles of tunnels within the ruins at this massive complex. buried within these stones are exquisitely detailed structures fully preserved in their original form. However there is no public access to them. 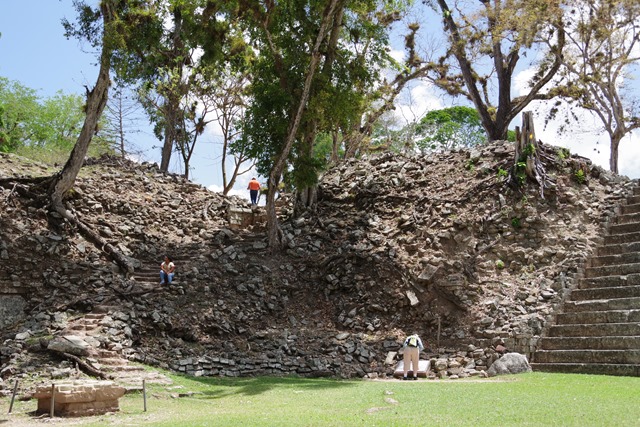 Further to the left it looks like this. Amazing to realize how much the ruins were originally in ruins when found. And it other parts of Central America they are still finding more huge complexes never before seen. 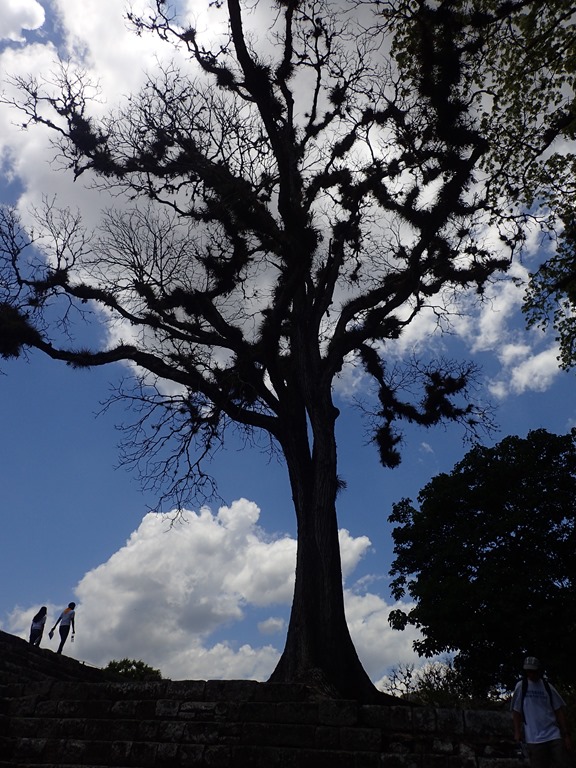 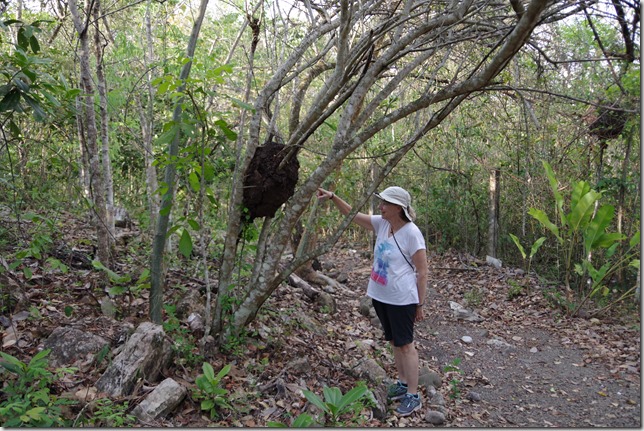 Linda and a termite nest.

Yes we saw even more ruins today, but I’ve already show more ruins photos than ever.