Writer’s Note: There may be some “Cliff Notes” posts in the future because our days are exceedingly long and fully packed and our nights are short meaning there is very little time for writing. The result may be fewer words, words I want to write so I can tell what happened. Guess the photos will have to tell more of the story as was the case with yesterday’s post. I could have written an article describing everything about our serendipitous encounter with the wood cutter. Such is Life.

One other thing. Regarding that unidentified bird from the previous post. I asked a well known El Salvadoran bird expert who just happened to be our guide, Ben, what it was. He said it sounded almostexactly like the well known Parte Amarilla No Nombre Mirlo. And dear readers, that is why you read Bob’s Blog, your trusted source in all things travel. 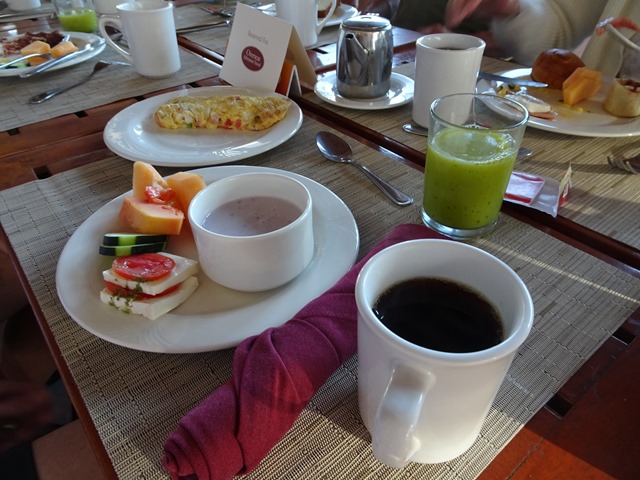 At least five days a week in our normal life Linda fixes a morning drink that I have dubbed “green goo” because of the kale in it. This is the Salvadoran version of green goo, the green in this case coming from celery. I have nothing against Salvadoran green goo, but I have to say I greatly prefer Linda’s version. 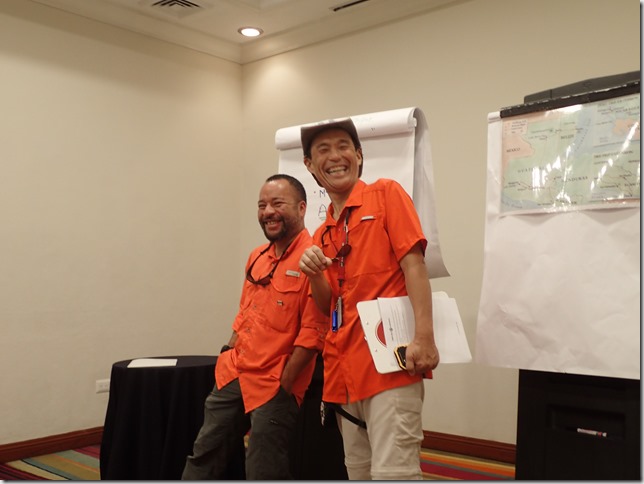 Without a doubt, Richard and Ben are the two best guides we have ever had anywhere at anytime on any tour. Nothing more needs be said though O.A.T guide of the year comes to mind. 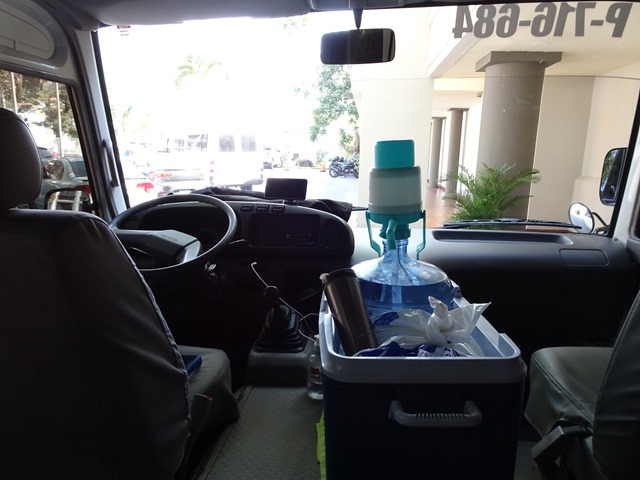 Going back to an old blog standby – View From the Front. In this case from the front of our tour bus rather than our coach. Bet you can guess that one of the tour no-no’s is drinking tap water. 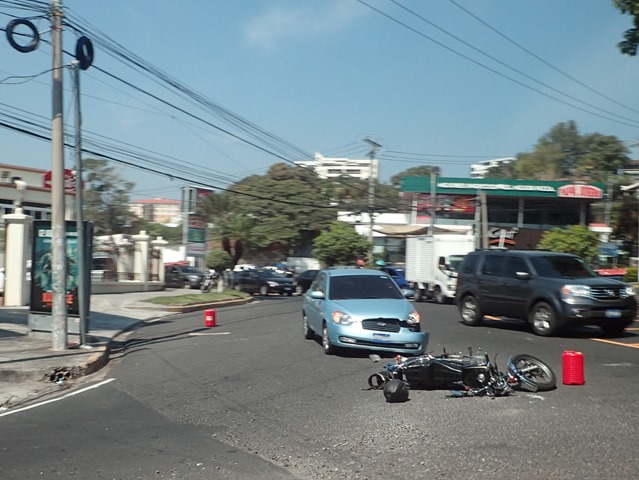 Laws in El Salvador are treated as “suggestions”. Something else is the way to describe most situations is by use of the term “it’s complicated”. My guess here is the motorcycle was in the inside lane and thought he had enough clearance to turn right in front of the car. Or maybe the motorcycle thought the car was going to also turn right and it didn’t, or maybe the car was moving over into the left lane and didn’t see the motorcycle, or maybe both were eating pupusas and neither was paying attention or maybe… like I said it’s complicated and besides laws are only suggestions. Just trying to help you readers understand how Central America works. 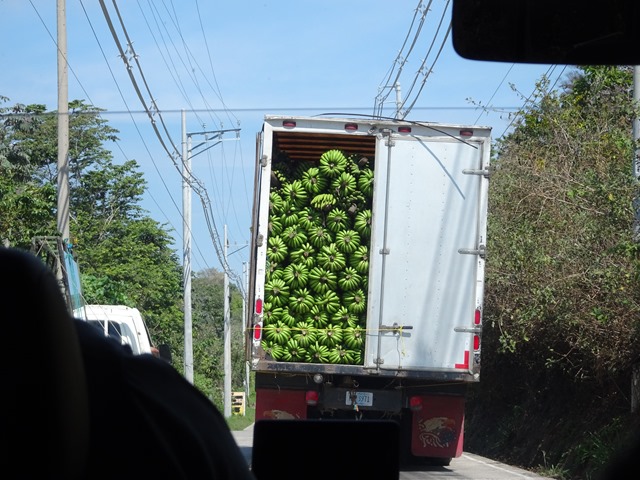 A truckload of bananas most likely from Nicaragua since the truck has plates from there. That’s what Richard and Ben surmised and who am I to question their collective wisdom. Looks like we aren’t the only country to get green bananas. Green bananas are export bananas. Ones for the US have to be certain variety with an exact size, shape, with the taste Americans want and also a certain degree of unripeness for shipping to the US. Which means the people down here get all the ones that taste the best very best, regardless of size, shape and variety. 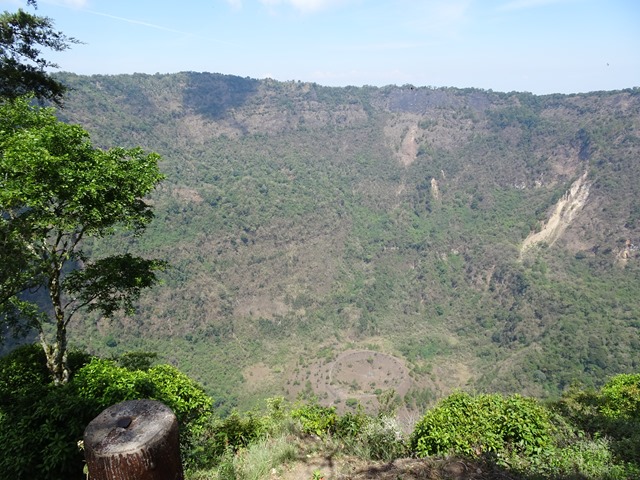 A big hole in the ground where in 1917 Boqueron volcano, aka San Salvador volcano, erupted and the crater lake inside it disappeared. The country also has numerous small earthquakes everyday, with the occasional big one that serious damage. The attitude is: Qué Será, Qué Será. 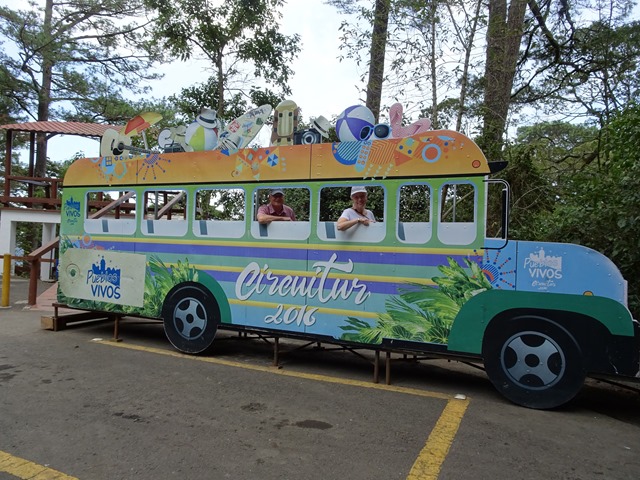 The daily Chicken Bus post. Can’t say much for the bus, but that girl sitting up front is a babe in my book.

The water doesn’t always come out of the spigot when you turn it on. Many people in San Salvador have water delivered by truck to supplement those times. The situation in other countries makes the problems we complain about along these lines seem laughable in comparison. 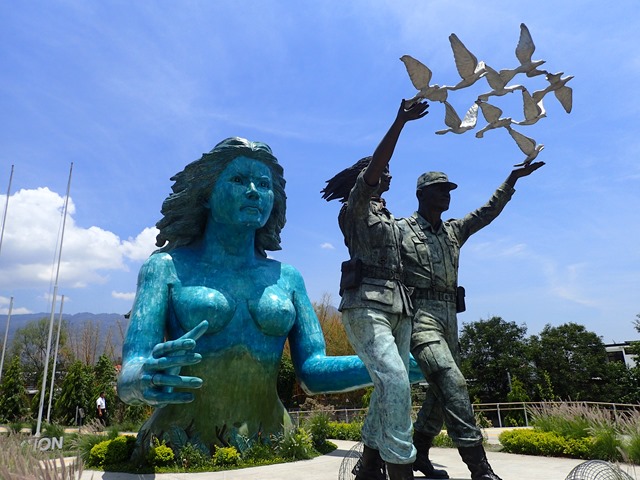 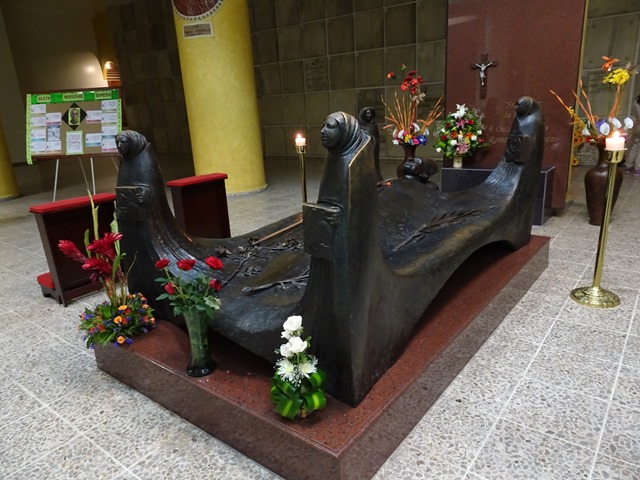 Tomb of Óscar Romero Archbishop of San Salvador. Murdered for speaking out against poverty, social injustice, assassinations, and torture taking place on both sides during the civil war in El Salvador. 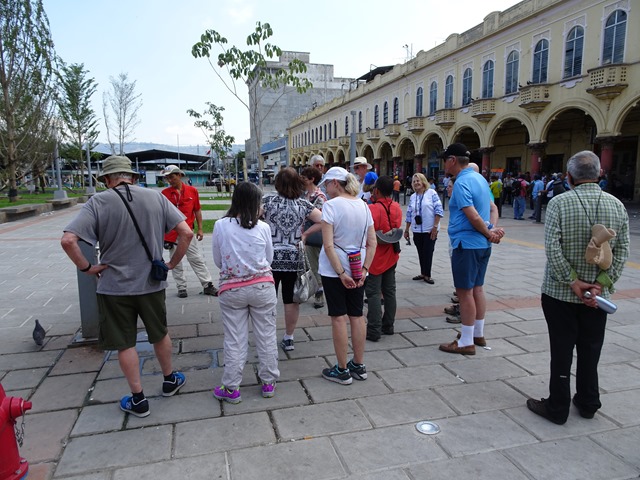 Our group of fourteen, all experienced O.A.T. travelers. 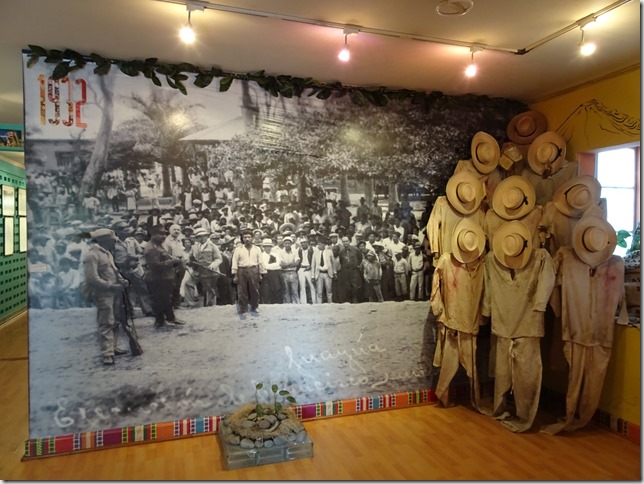 In 1932 almost all on the indigenous Mayan population of El Salvador was killed during a government led genocide. Man is man’s worst enemy. 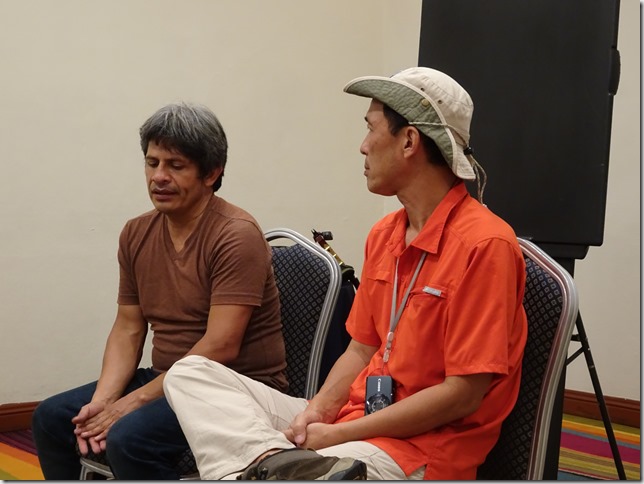 Imagine being  a little boy and coming home to find your mother and sister lying on the floor in pool of blood having been murdered. Imagine finding out your brothers were murdered in a church. What would you do with your life? His role is to speak out against injustice in the world to prevent any other children from facing what he faced. Yet every day the same thing happens over and over around the world. Would you have the strength to keep on trying day after day like he does?