Leaving on a Jet Plane, 90 Days till We’re Back Again 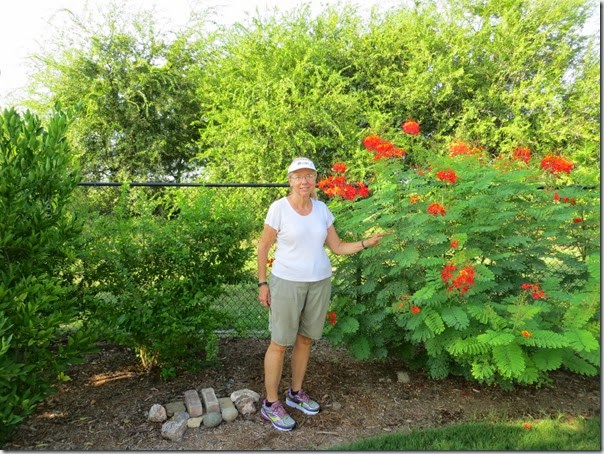 Photo of Bob’s favorite beautiful model beside Linda’s favorite plant. Now if we can just remember to take the same photo when we get back we will know how much it has filled out. The plant that is, not the model. 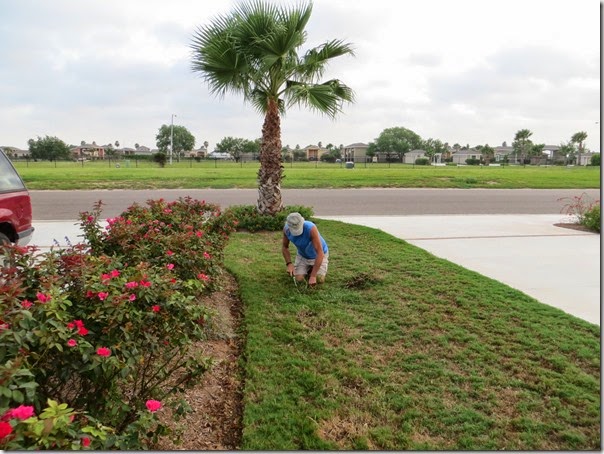 The gardener Linda employs giving our yard a final weeding before we leave. Nothing like doing the weeding in nice pleasant 80° weather, which after weeding the past few days in the afternoon when it was over 100 just shows that while I may be slow, I can learn at least a few things. 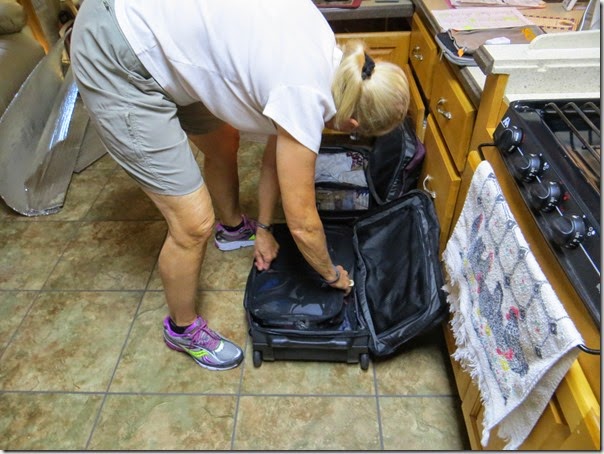 Our flight from McAllen to Houston was scheduled to leave at 1pm, our ride to the airport, thanks to our neighbors Tim and Bonnie, was scheduled to leave at 11pm, all of which meant that Linda was pushing for us to be ready by 10:30. I believe it had something to do with my past history of timeliness in similar circumstances. Wonder of wonders I was doing great, which I think flustered Linda more than if I had done my usual.

One of those moments came when she went to finish the checking of my bag. Discovering that all was as it should be and everything was in there, she went to stand it upright. The only problem was she forgot to zip it closed first. I forgot the first rule of being around a mad grizzly when I asked her what happened upon hearing some loud and unusual word punctuating the air in the vicinity of where she was standing. Burned Bob. 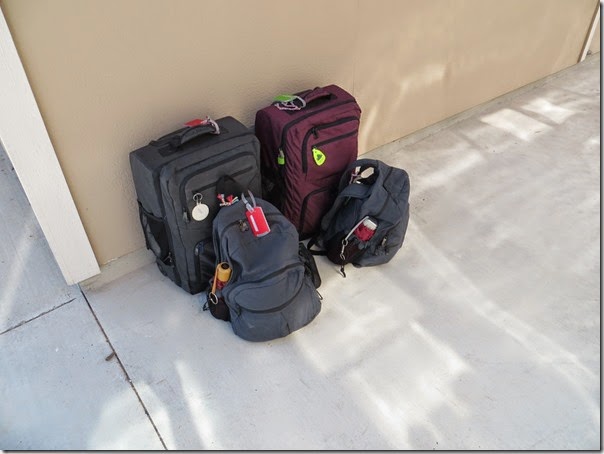 We travel light, taking far less than many people do who travel to Europe for only a week or so. Included are the guide books that we tear the paged out of and throw away as we move from place to place. Then there are the three pounds of vitamins that are packed. I admit to taking some, but the vast majority is she who has to take – fill in the blank – or calamity will strike. It is a case of where ‘'”We’ll get them over there” just doesn’t work. Life for me would be made unbearable should they not be available over there. 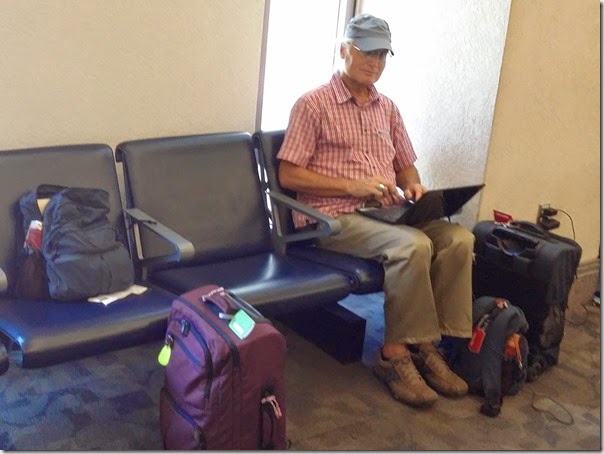 What we will be doing at three airports today, or at least we hope that is the case. we have scheduled lots of time between our flights so there should be absolutely no need to run through airports. Heaven forbid I should cause another tripping incident similar to the infamous Dallas Airport Linda face plant and foot injury, the blame for which that was 100% mine. 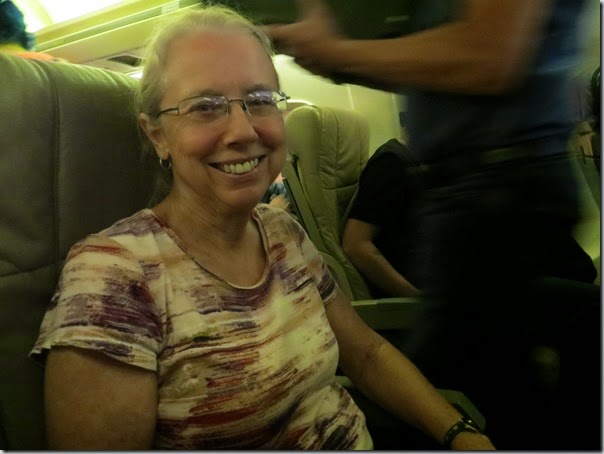 Leaving on a jet plane, in 90 days we will be back again. The big smile is because Linda has her favorite seat, an aisle seat. If she is unlucky enough to get a middle seat she has been known to let the person in the aisle seat she will be throwing up a number of times during the flight if they don’t trade seats with her. And as has happened before, that is no idle threat on her part. 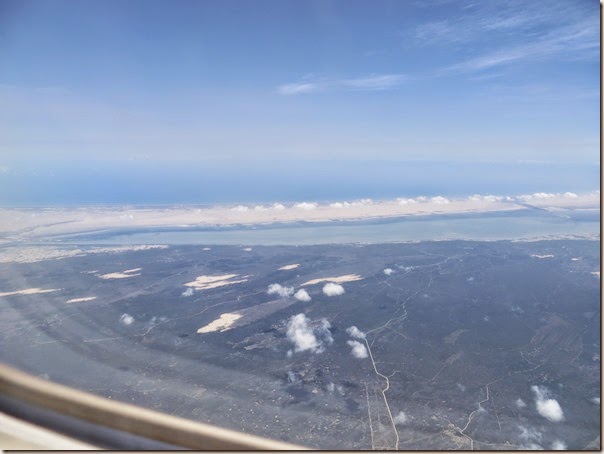 Over the Texas Gulf Coast on our way to Houston. This was a United flight, the next two, to Frankfurt then to Stockholm are on Lufthansa. Leave McAllen at 1pm today, arrive in Stockholm at noon tomorrow. That’s 23 hours, 7 of which is a time zone change. 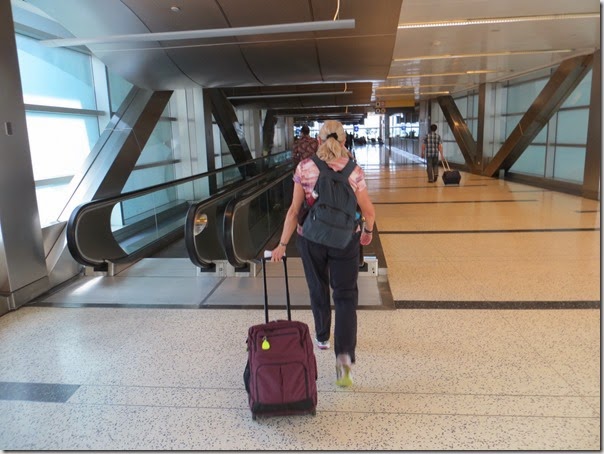 Heading to the gate at Houston. Please note the distance between Linda and myself. No chance of my foot being in the wrong place on this trip. When we were standing in line to board the aircraft she pulled her bag over my foot. The resulting look was enough to ensure that no matter what I was going to keep the assured clear distance from her. Smart Bob. 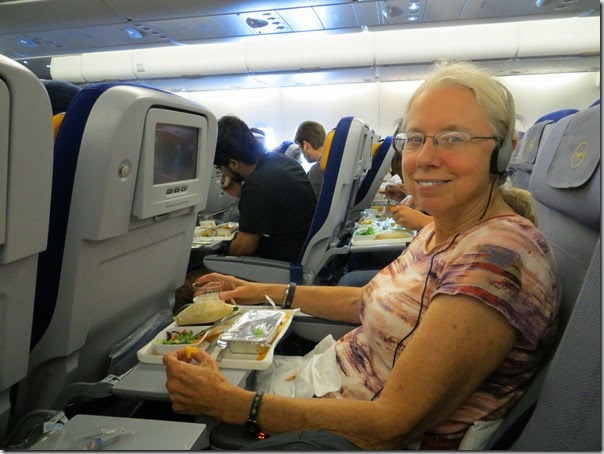 Dinner time on the way to Frankfurt. Note for future travel, free wine on all our Lufthansa flights. We were both tired enough to get a good amount of sleep on the flight, which was the largest plane flying, the Airbus 380. The best thing was that there was no one in the seat between us so Linda was able to laydown which allowed her to actually sleep. I have no trouble, though I did have the weirdest dream about sitting in the cockpit of a plane as the pilot drove on the ground. Not sure what that was all about, but it helped pass the time.