A Very Long and Tiring, but Rewarding Day 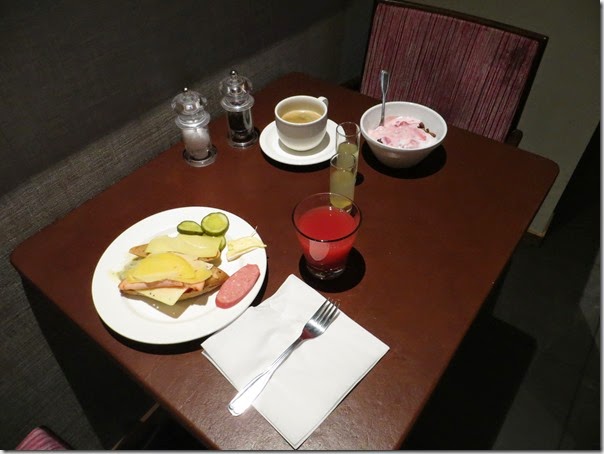 As you can see we have different tastes in what we eat for breakfast. My thoughts are I want to eat something different than at home. Linda wants something she knows she will like. I keep telling her if she would try the pickled herring she might like it. Her look says it isn’t ever going to happen. Yesterday I tried the drink in the small, tall glass. It was some sort of lime apple juice drink. It was so good I insisted Linda try it, so she took a very, very tiny sip. I notice that she got her own glass this morning. 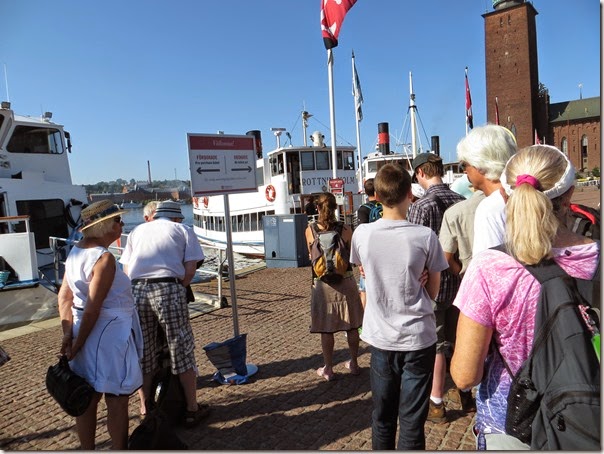 Off by boat to Birka today. This was the site of the first Viking town, meaning it was the actual first town, in Sweden. Two hours on the boat to get there, four hours there, and two hours back, all with the temperature nearly 90 which is about 20 degrees hotter than normal. Still it was a day filled with learning about Viking life. 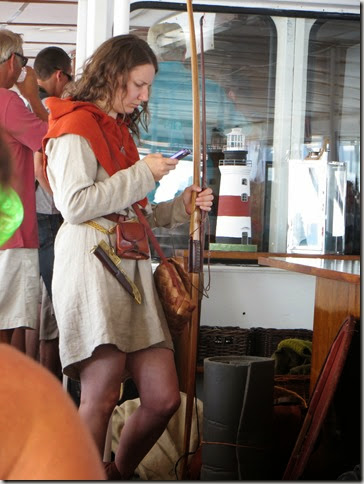 As you can see, the Vikings were far more advanced at communications than we thought. 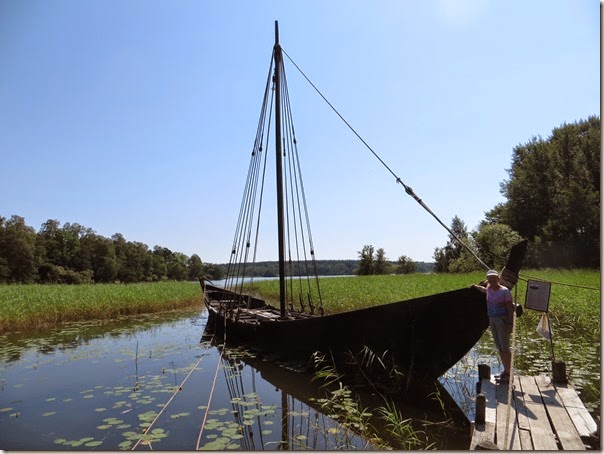 From what we have learned of Linda’s heritage through DNA testing, it is very likely her ancestors did some plundering and pillaging in boats exactly like this before they migrated to England from Scandinavia. 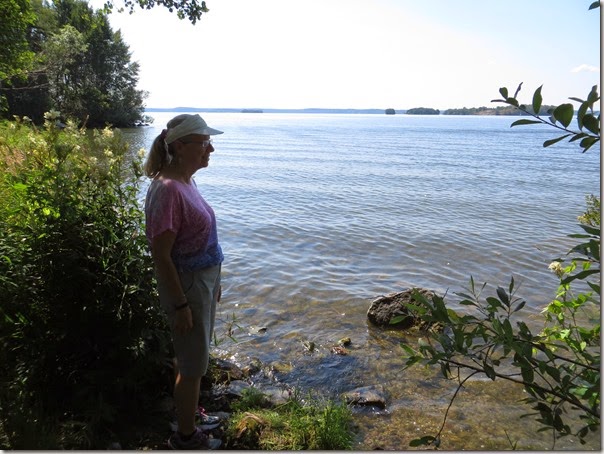 What I missed here was Linda picking up a small rock out of the water. When I finally figured out what she had in her hand she smiled and said, “It would be much bigger if I didn’t have to carry it around for three months.” This is were I wasn’t going to say, “But I don’t mind carrying a bigger one for you if you really want one.” Learned my lesson about saying that decades ago. Smart Bob. 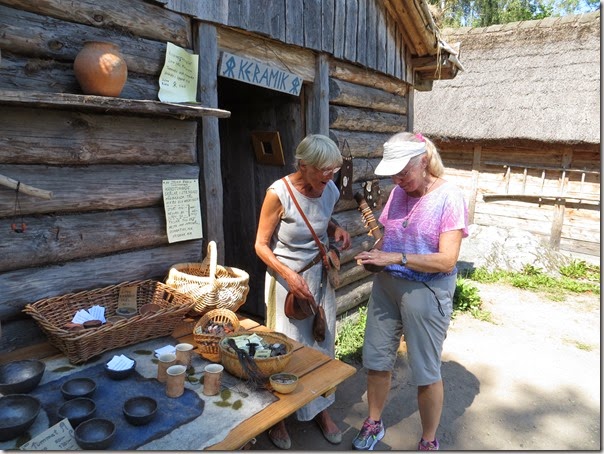 In the reconstructed Viking village Linda bought a runar med rem which she already has around her neck in the photo. 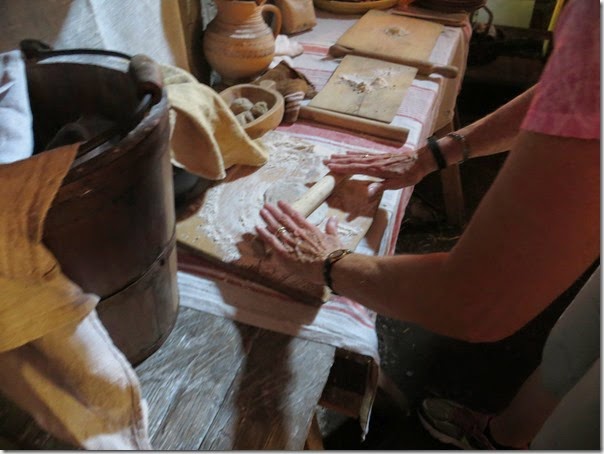 Linda was in 7th heaven in the tiny, dark bakery where she got to roll out a flatbread just as her ancestor would have done. (We learned that about 90% of the people were farmers or farmer’s wives, the remainder Vikings or Viking wives.) Knowing Linda all these years, there was no way she was descended from the farmer side, she is a Viking through and through. 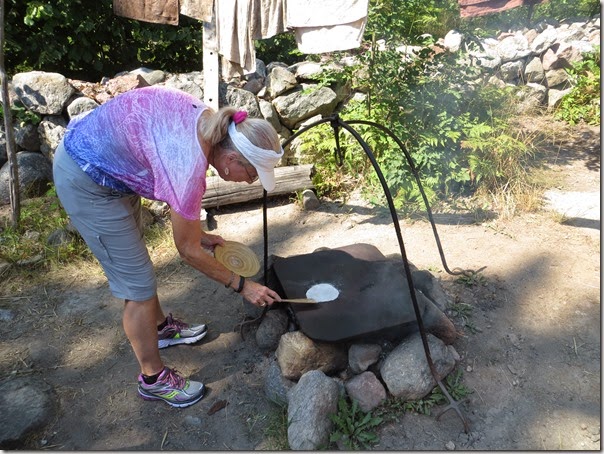 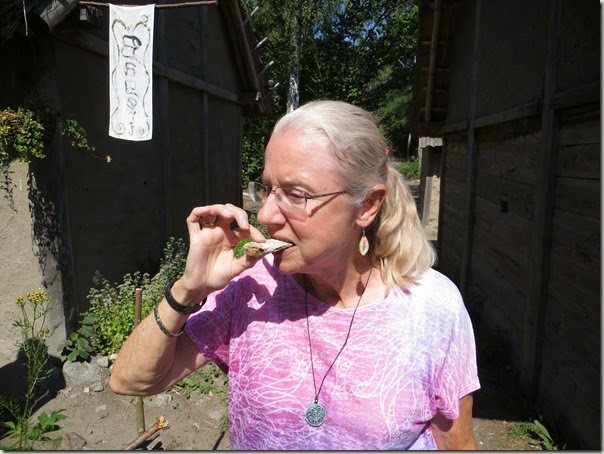 “Baked”, she slathered on butter and honey. I did get one small bite and I can confirm that she has lost none of the baking skills her ancestors had, 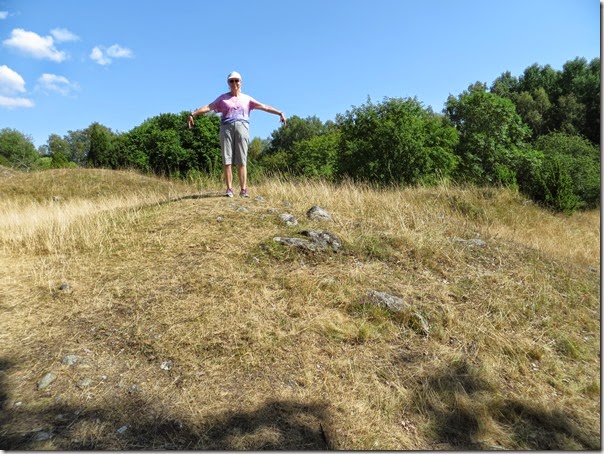 Standing on a Viking burial mound. For all we know it could have been one of her ancestors. 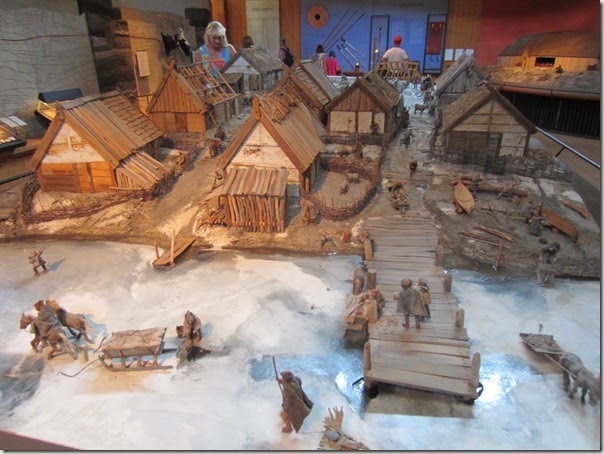 Model of a Viking town. Did you know the horns on the Viking helmet is a myth that was invented by Hollywood to make the Vikings more visually appealing in the movies. One of many photos of actual Viking beads I discovered when I downloaded Linda’s photos. I can only imagine how many of these we will have by the time we have visited Viking museums in the rest of Scandinavia during this trip. Something tells me she is planning on making a Viking style beaded necklace when get back home. 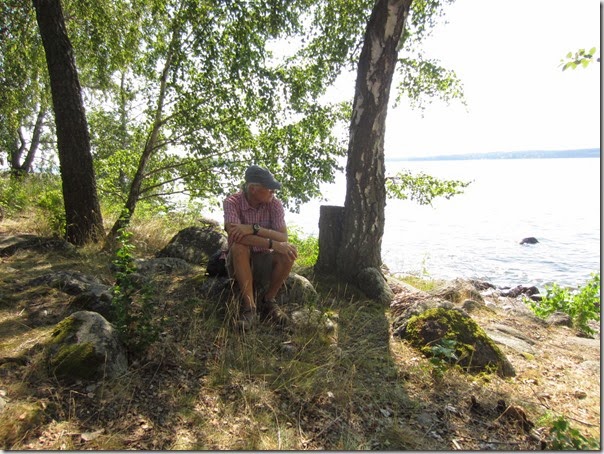 It was a long, hot exhausting day. We waited for the boat while sitting on moss covered rocks in the shade next to the water. It was a day to realize that what we we had thought we knew about the Vikings wasn’t what the Vikings were really like. They did have a few gentle moments. Linda is just like that. I know she has Viking  blood in her for sure now. 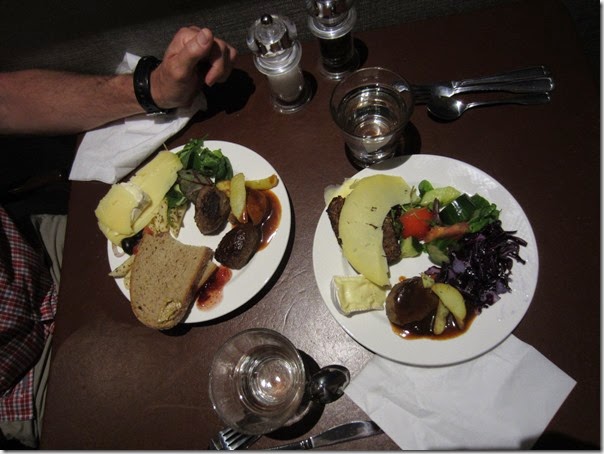 An awesome Swedish meal to end the day. Swedish meatballs and potatoes with a sauce that was to die for. Add in the bread and cheese and the dessert, not shown as we ate it before I think to take a photo. The dessert? It was chocolate mousse topped with real whipped cream. Life is too good.

Note: I am writing this on Friday morning as we were so tired after that long day we fell asleep immediately upon returning to our room. The great thing is that we have experienced no jet lag this trip. More about that later, as we have another full day seeing things and going places in Stockholm to do.