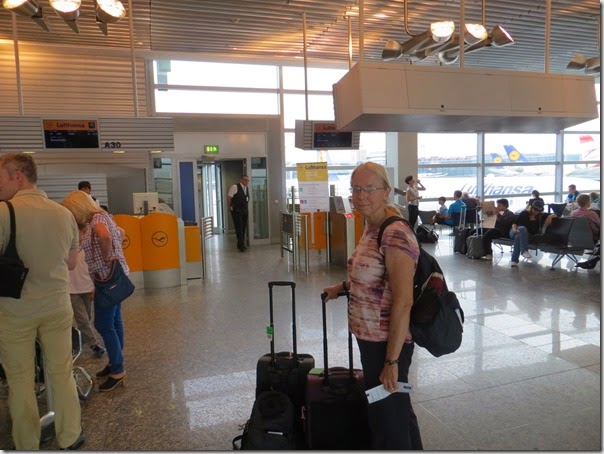 Photo just to prove that Linda was able to get off the plane in Frankfurt and make the long walk to the Stockholm departure gate without any tripping by Bob. The airports in Europe are all easy to navigate because we have found the signs to be in English as well as the language of that country, which makes sense considering all the different languages of Europe and the fact English is pretty much the common language, which makes it easy for us. And if you think all the references to my tripping Linda might mean I am a little sensitive in that area, you are 100% correct. Kind, Considerate, Sensitive Bob. 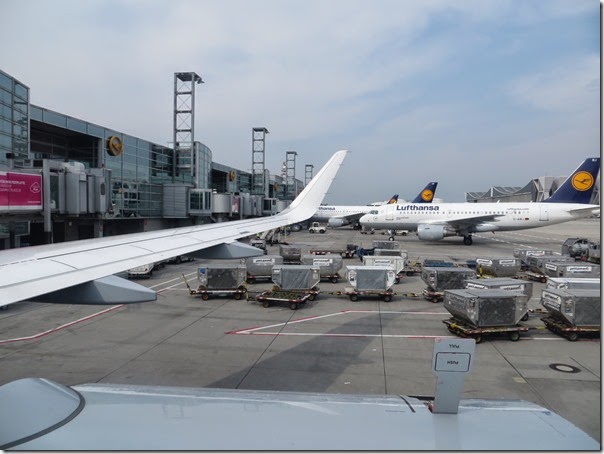 The view out my window as we prepared to leave Frankfort for Stockholm. We are not sitting together, Linda being 5 rows behind  me in a window seat. Yes, that is correct, in a window seat, though she says she can travel in a window seat, it’s that she can’t travel in a middle seat, and much prefers an aisle seat. And to let you know something that is meaningless, I have written this post to this point during the flight to Stockholm. And now to spend the remainder of the flight looking out the window at the Swedish countryside, 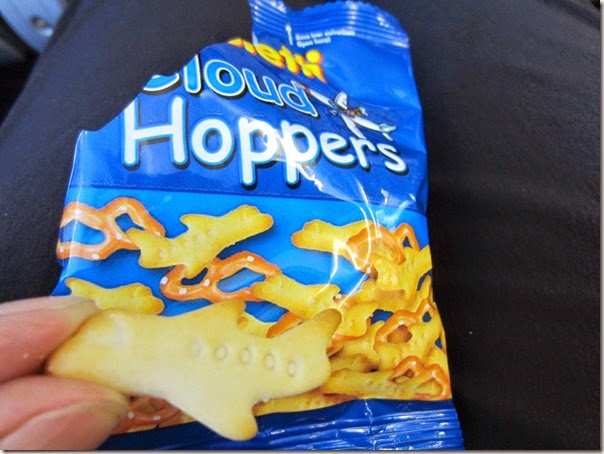 It turns out that even though Linda did sit at the window for the trip, no photos were taken by her, or least no photos of the Swedish countryside. Obviously she found the snack crackers served on the flight very interesting though. Maybe it was a case of eating airplanes to keep from getting sick on an airplane. Just another of those unfathomable female mysteries of Life. 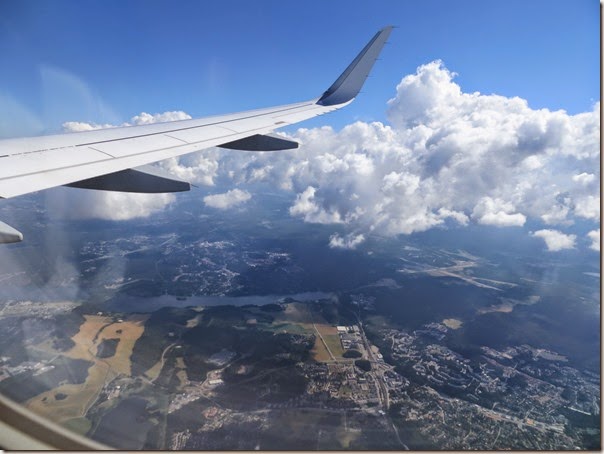 Actual photo of Swedish countryside thanks to Bob. The rest of the story is that when I quit typing as stated above, the view out the window was of the Baltic Sea as far as the eye could see. Of course I did take a number of photos of what I thought were clouds, intending to write about them as the excuse I couldn’t see land before I finally realized what I thought were clouds was actually water. Hey, it is a foreign country, at least in a few respects, so my confusion is acceptable, at least in my mind it is. Lack of sleep makes Bob a dull boy. 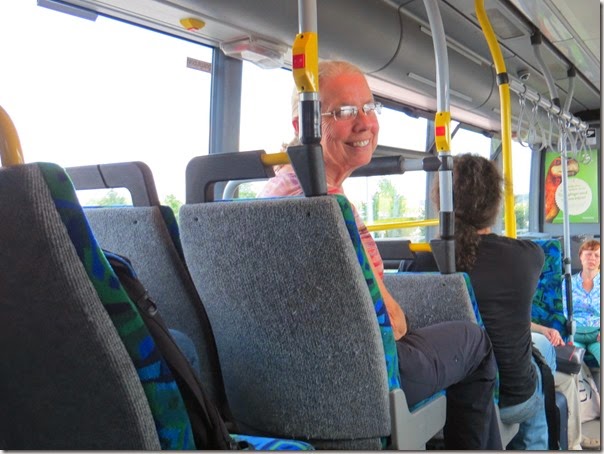 On a city bus going from the airport to a train station. We opted for the slow cheap way into town versus the fast expensive way. I don’t know if the fast train was air conditioned, but the city buses sure aren’t. I guess they figure why put in in when you only need it a few days a year, like today. Linda, she who would put a bloodhound to shame, commented on the lack of deodorant use by almost everyone on the bus, along the sidewalks, on the train, on the Tbana underground. And here I though it was just the way Sweden smelled. 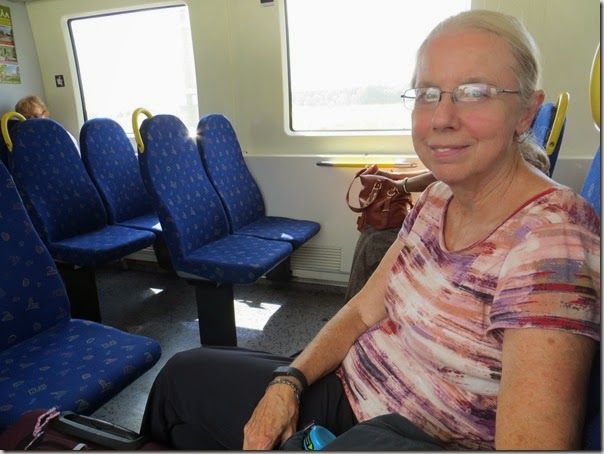 On the train now, we loved it every time we passed through a tunnel as the temperature would instantly drop. It was a good trip other than the fact Linda wanted to get off about 5 stops too early. Guess she wasn’t up on her Swedish as much as I was. The one word I already know for sure is up, which in Swedish is really up as it is spelled, upp. 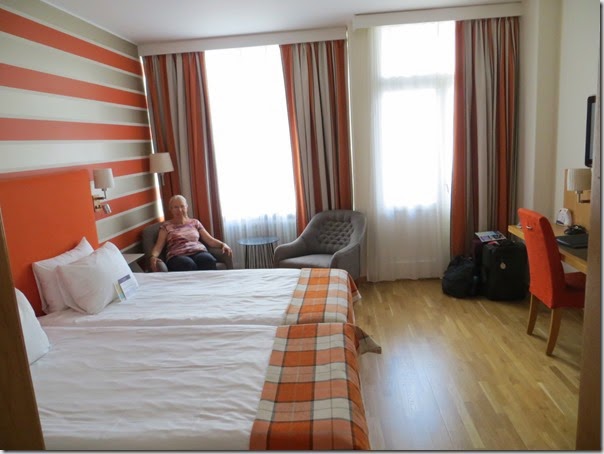 Our hotel room in Stockholm. just after walking through the door. This is the same hotel room we will be in when our Rick Steves Tour starts so we won’t have to move. Had to love the elevator. We are on the 5th floor. The elevator, like we often find in our European travels, is a two person elevator. The good thing is if I use the stairs it means I can eat more. Lucky Bob. 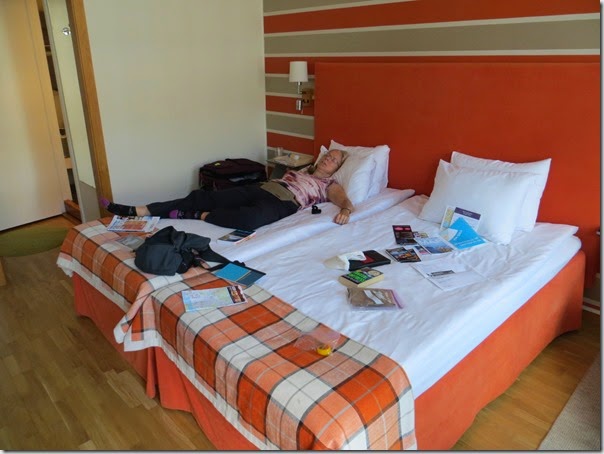 The same room a short time later. it look like getting out all the Stockholm literature we picked up at the visitors center at the airport was a little too much for a certain person in our traveling party. To shield the identity of that person I won’t mention the persons name. Nice Bob. 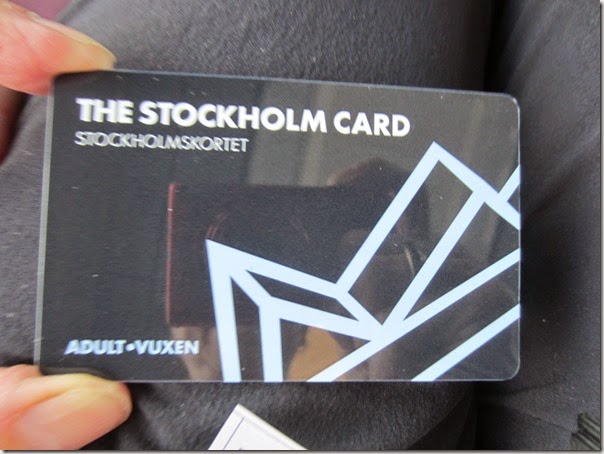 We did buy Stockholm Cards to make it easier to travel around town and to get into many of the sites. Free travel and no or reduced admission fees make Linda a happy girl, at least until the credit card charges for the cards show up. Now if I can just get that unnamed person in our traveling party to wake up, we can start using those cards. On the other hand, if a period of beauty rest makes Linda a happy girl, Bob will also be a happy boy. 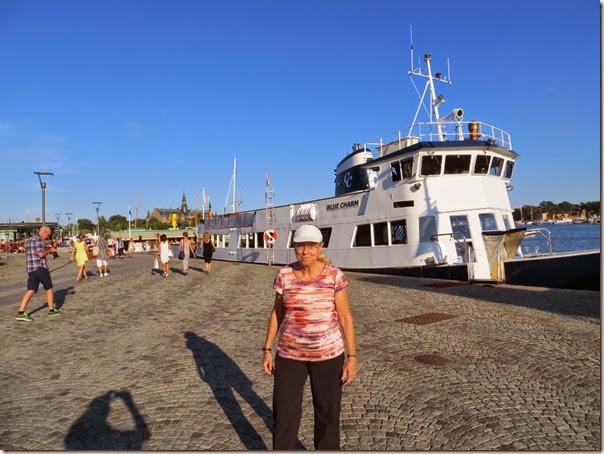 In the evening we took a walk down to the waterfront, unfortunately we were so busy looking and talking about how nice it was we took only a few photos, none of which begins to give any idea of just how beautiful it is, or what it is all about. There were places where it seemed every tourist in Stockholm had to be there, while not much further along the crowds had vanished. 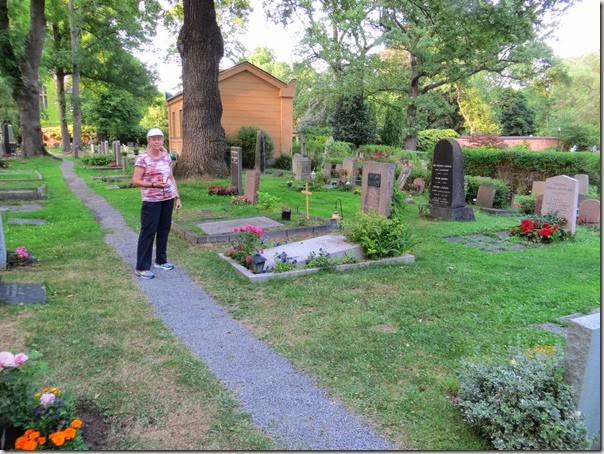 One of those places where there were no crowds was a small cemetery near the Nordic Museum. As near as we could tell it appeared that most of the markers were for men (with other family members also buried with them) who had a connection with the sea. 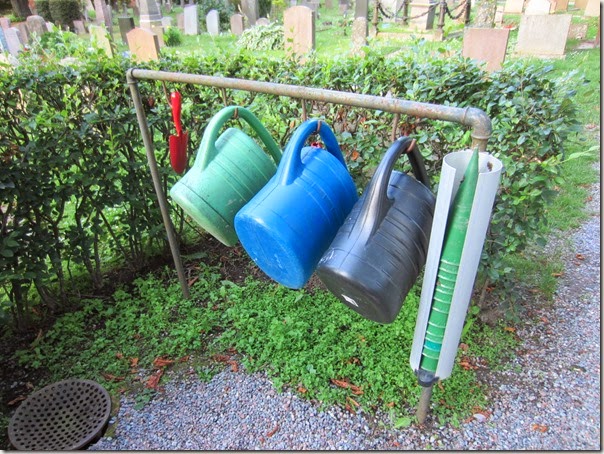 One of several photos like this I found in Linda’s pictures. 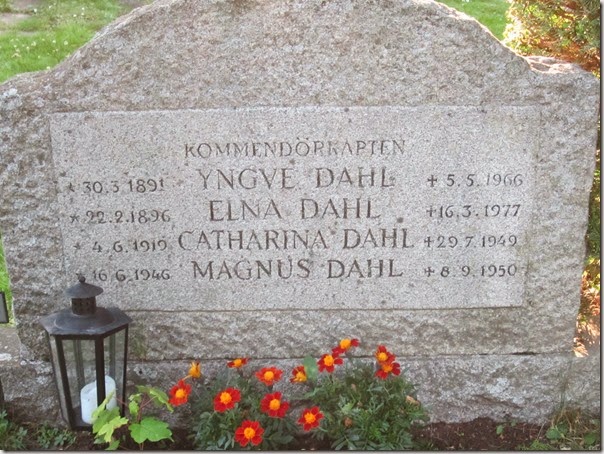 Looking at this marker we wondered if this might be a distant relative of readers and friends, Paul and Marty. 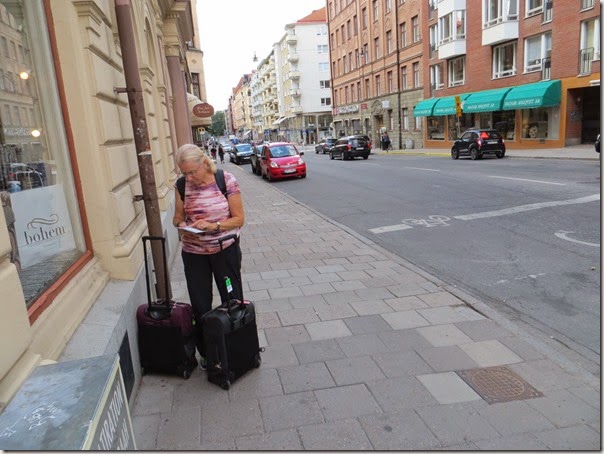 Linda has already posted this photo to her Facebook page but I would be remiss not to include it as part of todays post. We had good directions how to get from the Tbana (subway) station to our hotel. Which was only a couple of blocks from the station. It didn’t matter as we did our usual, meaning we came out the wrong entrance then got lost. Fortunately a very nice lady asked us if we were lost, then lead is to the street that our hotel was on.

Let it be said that just before she came along Linda and I had a discussion about which way to go. As it turned out, the direction I wanted to go was the right direction, yet you won’t find me bragging about, in fact I am a little sheepish about it. You see, before we left I downloaded a very nice set of maps on our new tablet, then marked the location of each of the hotels we we are staying in. Plus the tablet has a gps and with touch of the green dot in the corner of the map you can see where you are. The problem is, I forgot all about having it along. Dumb Bob.

We tested it out on our evening walk and it and it works great. I won’t have to worry about remembering we have it as Linda will make sure of that. Smart Linda.