Another Great day in Stockholm 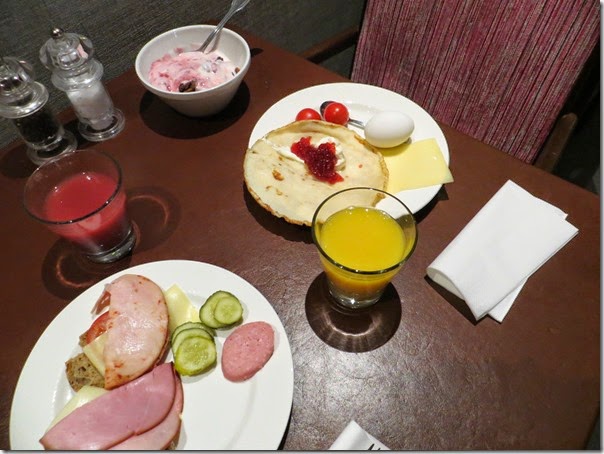 As I’ve said before, we go our separate ways when it comes to breakfast. I go for the  meat and cheese on bread with pickles and herring, and as you can see my herring is already gone. Have to eat the really good things first. While Linda goes for the chicken food and chicken egg. I don’t much care for the breakfast food she likes and she positively doesn’t care for what I like, so we agree to disagree. 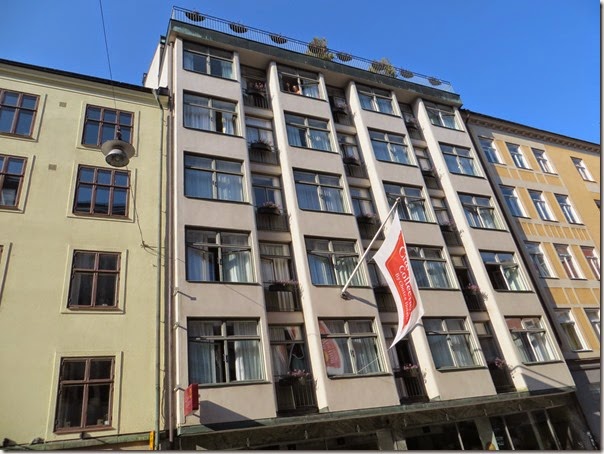 Our hotel room. Top floor above the flag. The one with the good looking woman leaning out of it. Linda can’t believe I haven’t gained any weight with as much as I have been eating. The secret is walking up and down the stairs every time I go up to or leave the room. Tired but thin Bob. 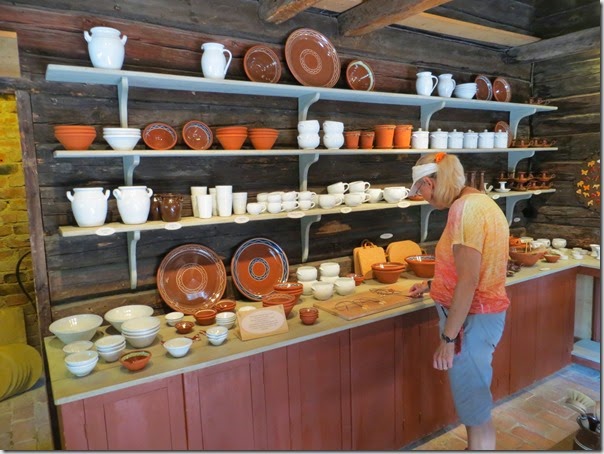 Today we went to Skansen, the open air museum that shows the culture of Sweden  over the centuries through preserved buildings and craft shops. We were in line when the ticket booths opened and a few minutes later Linda found the pottery shop. Maybe I shouldn’t say found as in accidently discovered it since she had plotted the way on the park map. 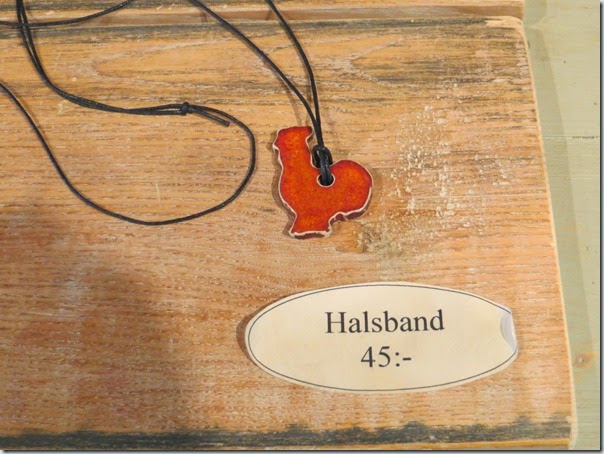 This is what Linda was fondling in the previous photo, a ceramic chicken necklace. 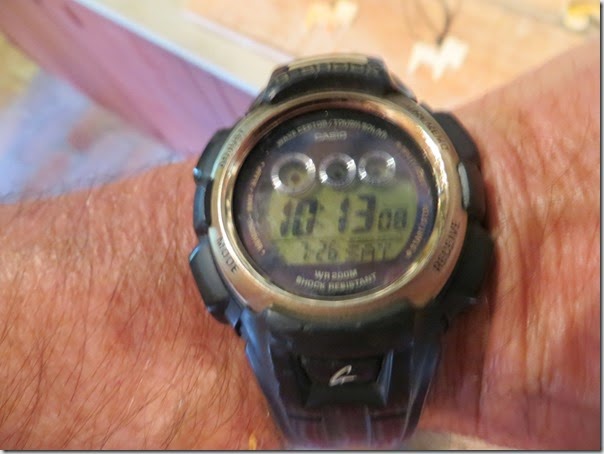 I took this photo after I had paid for it. She buys, I pay. The ticket booths opened at 10 on the dot. We were about 10th in our line, into the park, find the escalators to the upper level, find the pottery shop, pick out the red chicken, pay for it and have it wrapped up, all in less than 13 minutes. As I have said before, Linda doesn’t shop, Linda buys. Linda says she knows what she wants when she sees it. Fortunately we never saw a rock shop. Lucky Bob. 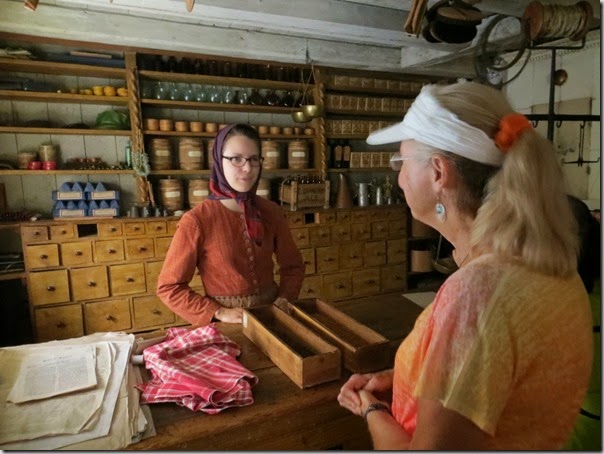 Most of the places you visit aren’t selling anything, they have a docent who is eager to share their knowledge. We had a great time learning from many of them. Super sniffer Linda correctly identified the two spices in these boxes in the merchandise store, surprising the docent. They all spoke English as well as Swedish, though some were harder to understand than others. 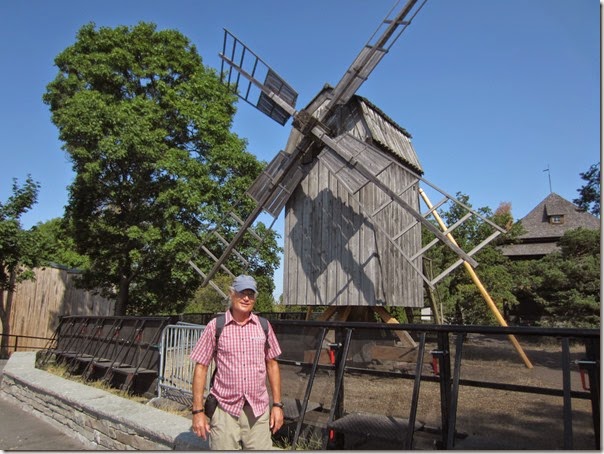 I just realized that all the photos I have been posting have been of Linda, so some of you may be wondering if Bob is even along on this trip. Wonder no more, Bob is here. This is also why it is photos of Linda that get posted. This was supposed to be a photo of this old windmill with me standing in front of it to show its size. As you can see, Linda’s photographic sometimes fall a little short of showing what she was trying to take a picture of, though her ability to pick a young, handsome model for the photo is outstanding. 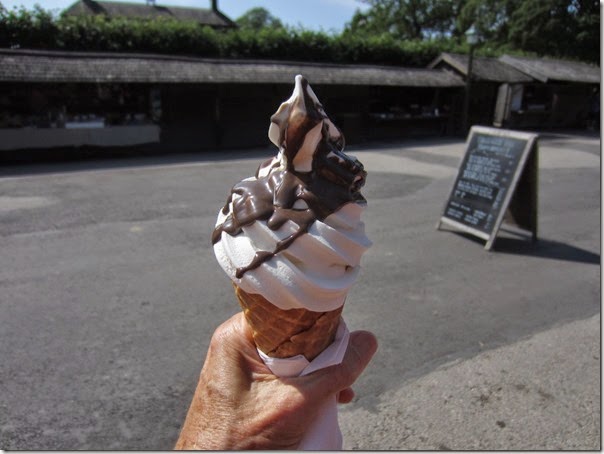 I guess all the picture taking and repeatedly telling the model to move here and there to take the previous photo, so what I get my right and left mixed up sometimes, caused Linda to work up and appetite. Next thing you know I will be blamed for causing her to gain weight because I don’t know where to stand to have my picture taken . Woman, God’s most wondrous creation. 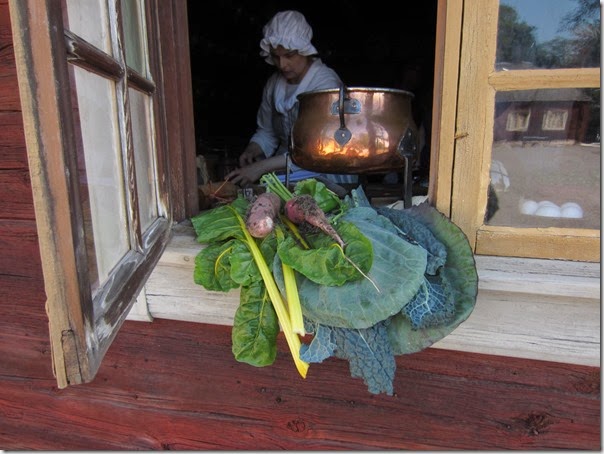 Another of those Linda photos that just show up when I download photos. We had a wonderful time talking to the docents who were very eager to talk and share their knowledge. We noticed that very few other people talked to them, but we wanted to learn as much as we could about the culture of this wonderful country. I would say the best part was when one of the docents commented that I knew so much about the 1920’s farmhouse he was at that I could be a docent. If only I could speak Swedish, so I said thank you very much to him in Swedish and his mouth popped open. Then I told that was one of the few Swedish phrases I knew and he got a good laugh. People are the same the world around if you are willing to talk to them. 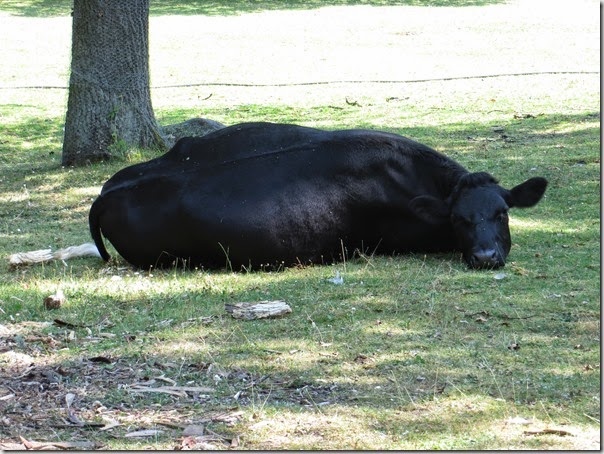 On occasion you see something that just begs to be photographed. This was one of them. 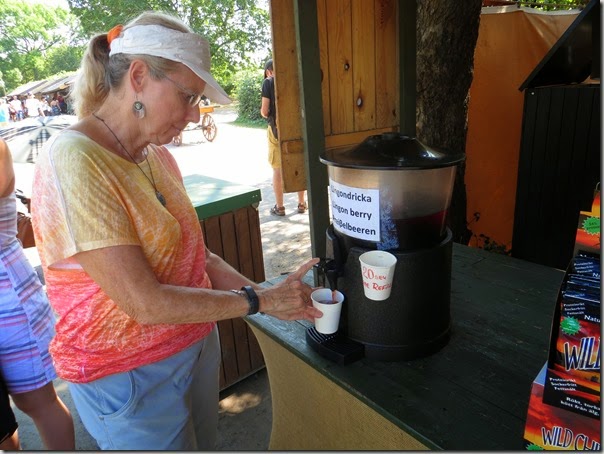 Linda refilling her cup with lingonberry drink. She had at least five cups as refills were free and it is that good. We have it every chance we get. 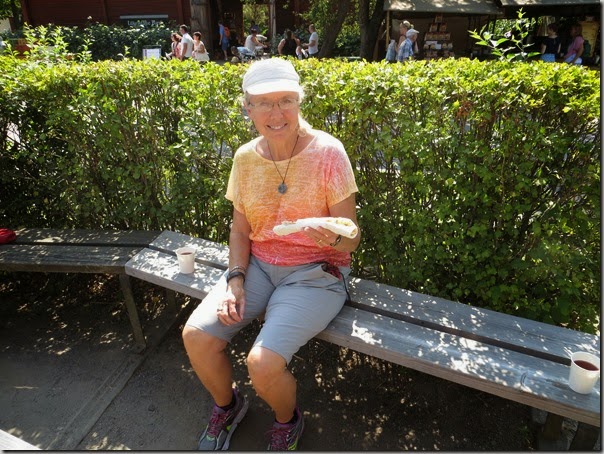 Linda getting ready to enjoy the wrap we had for lunch. 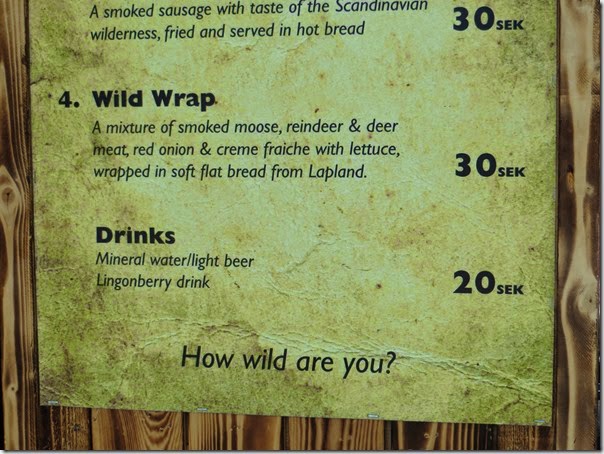 What was in the wrap. Linda is a changed woman this trip. In the past she wouldn’t have wanted me to order one as she wouldn’t have wanted to even be close to it. Today she had no trouble eating it, we are talking moose, elk and reindeer meat here, and she even said it was good. Bring her back to the land of her ancestors and she picks right up where they left off. Awesome Linda. 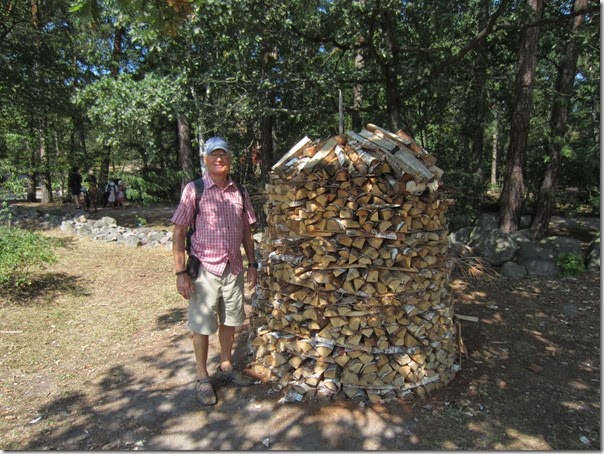 I don’t remember what was wrong with my pose here, something about standing in the shade instead of the sun as I recall. I think after this I was fired from my modeling job. But is is a very nice woodpile. 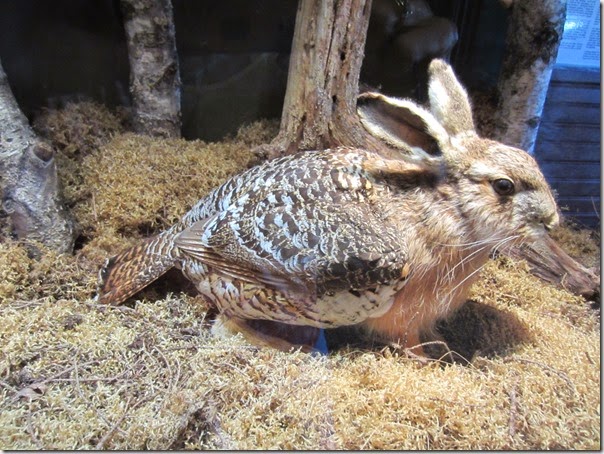 The Skvader is the Swedish winged cousin of the American Jackalope. 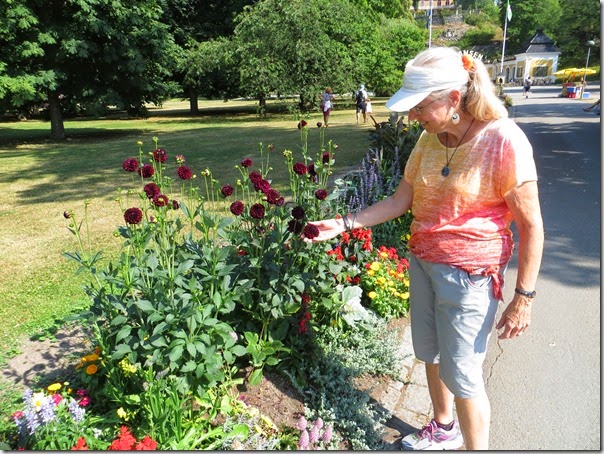 Too many museums to write about to, but what a great day it was. While heading to a tram stop Linda spied these gorgeous deep dark red dahlias. Gorgeous flowers, beautiful woman. lucky Bob. 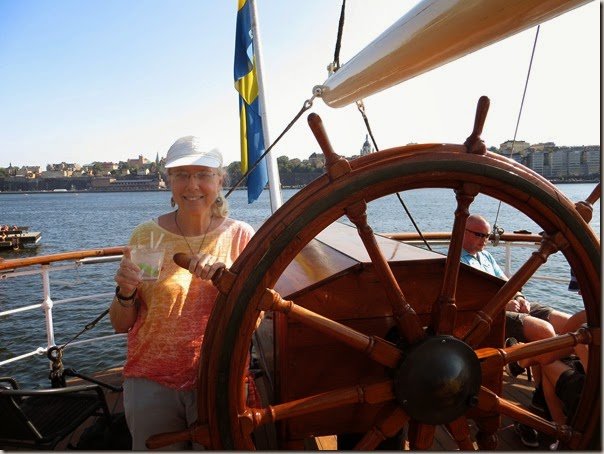 Life is not a dress rehearsal. Do it when you can, because you can. Love, laugh and retire early. 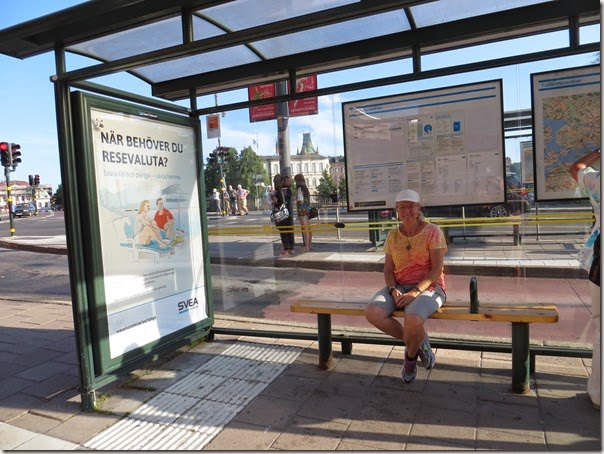 Nearing the end of another exciting day. The public transportation in Stockholm is fantastic. Between the Tbana, trams and buses it easy to get anywhere, and we make heavy use of them. 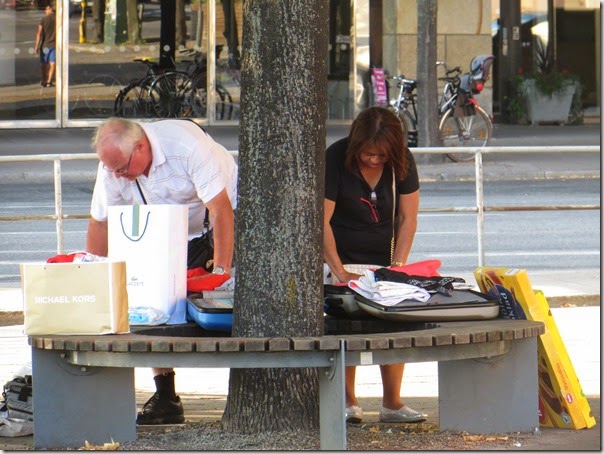 There is a story here. While waiting at a bus stop we watched as a car was towed off while this couple carried two small suitcases and six shopping bags over under this tree, it taking multiple trips from the curb where they unloaded them from the car. Them the proceeded to “try” and get everything stuffed into the two suitcases. It sure made the time fly by at the bus stop. Last we saw them they we were entering the doors of the Sheraton across the street. It just goes to show that no matter how bad your day might have been, someone likely had a worse day. May your day have been as great as ours.