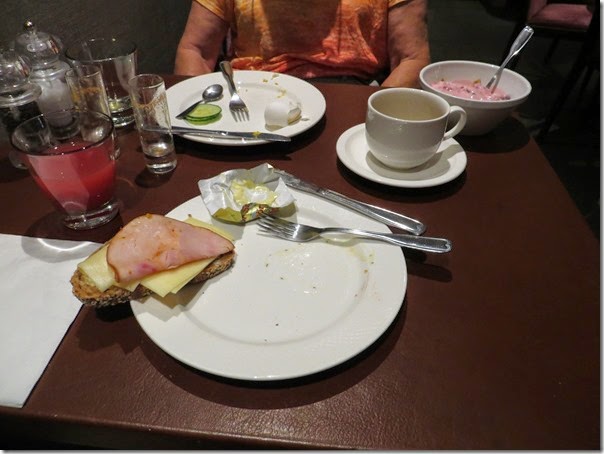 Photo of only a small portion of this mornings breakfast. The same thing happens with what I write about our activities for each day. You see, I can only write about a portion of the things we do everyday. It’s like the photo you didn’t take. You still have the memory even if no one else does. So is it with our days. We have great memories, with more happening every day, and we are glad to share the snippets that we can. 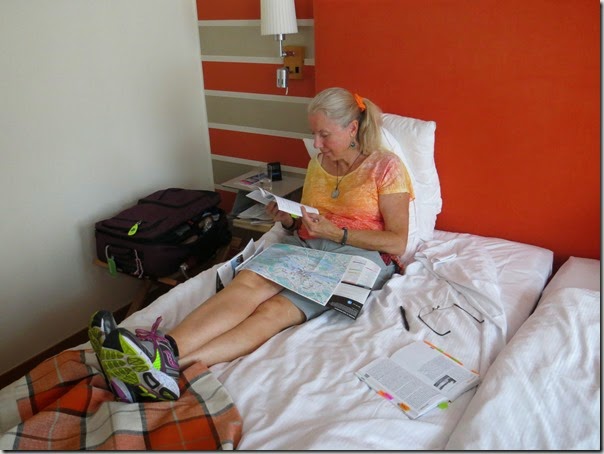 What we don’t do is wait until the last minute to plan the day. No, it is planned out months in advance. Now if you believe that I have a bridge in Brooklyn that you can buy cheap. Actually we do have some idea of what we want to do, but no specific plan for a day until that happens. Here is the family planner hard at work this morning while I wrote the Daily Journal entry for yesterday. Note that she is already to go even if we aren’t quite sure where we are going. 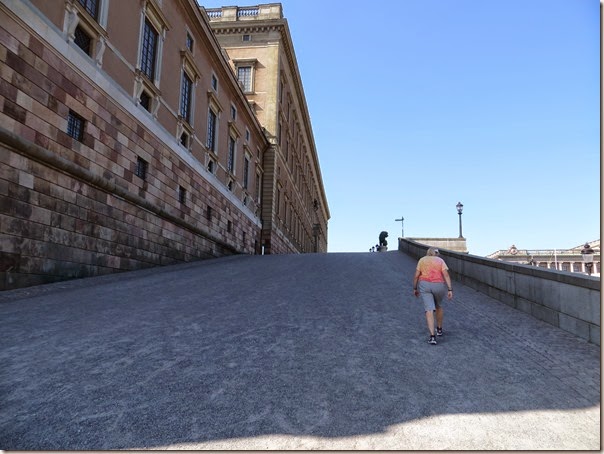 First off was a visit to the Royal Palace. When we arrived we could see the palace up above. I believe that at this moment Linda was having second thoughts about this palace visit. It would seem that going up hills all the time as a girl in hill country caused her to get a lifetime dose of uphill walking. Still, this morning she put her head down and trudged up the steep hill to the entrance. Unseen here is the second hill, just tike this one that is out of sight over the crest. I walked in silence the whole way, Linda mutter enough for the both of us. Smiling Bob. 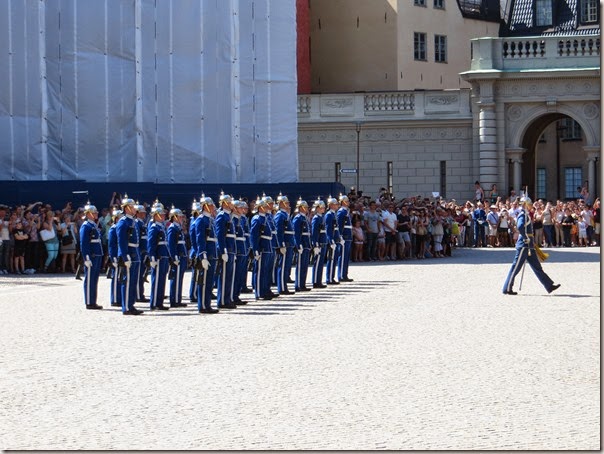 The changing of the guard at the royal palace. Seen this happen at one palace, seen this happen at all palaces. Until we get to the next country that is, that has a palace and changing of the guard. Never underestimate the desire of Linda to stand out in the boiling hot sun to watch a royal spectacle. Only later did I find out that while I stood out in the hot sun in the front row for over an hour to get good photos for her, she found a place to stand in the back against the palace that was in the shade. We won’t post what Bob thought of this. As for Linda, Smart Woman. 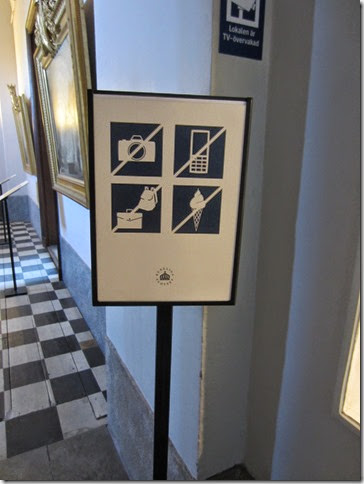 Why there are no photos of the inside of the palace. 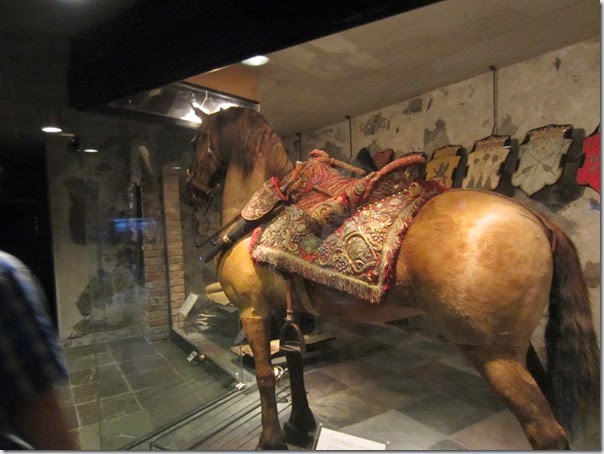 Below the palace is the Armory Museum, which being below ground, was nice and cool. Linda had this on her list of things to see. It is the stuffed, actual horse one of the Kings of Sweden was riding when he was killed in battle. Linda found this really fascinating. Later I saw her intently viewing a blood stained garment another of the Swedish King’s was wearing when he was assassinated. If curiosity is harmful, Linda is very lucky to still be around. 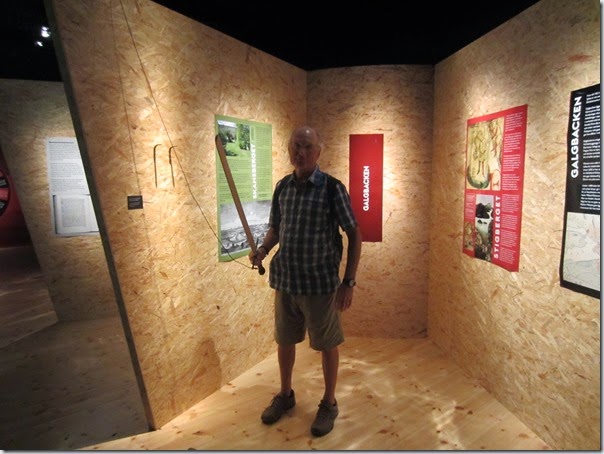 Another cool museum, both literally and figuratively, and also on Linda’s must see list. This one was the Medieval Museum. it may only be a wood replica of a battle sword, but I believe the way I welded it may have Linda thinking twice about whatever she had in mind with all that blood and gore stuff of earlier. With my luck if I were King I would probably not be known as Robert the Ruthless, no, it would more like be Bob the Bald. 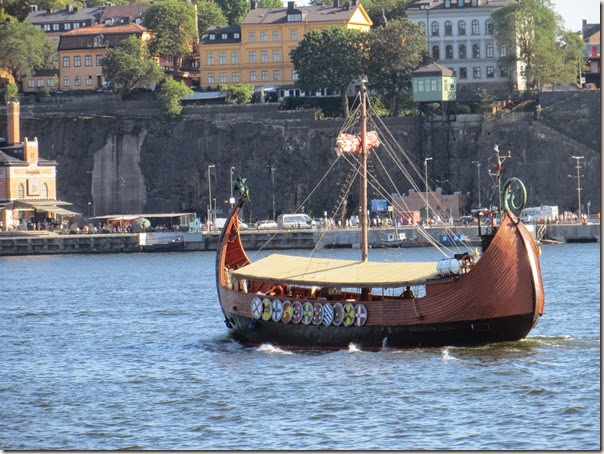 No, we didn’t take a cruise around the area on this boat, but I’d wager that if we could find out what it is and where it leaves from, we’d probably be on it. 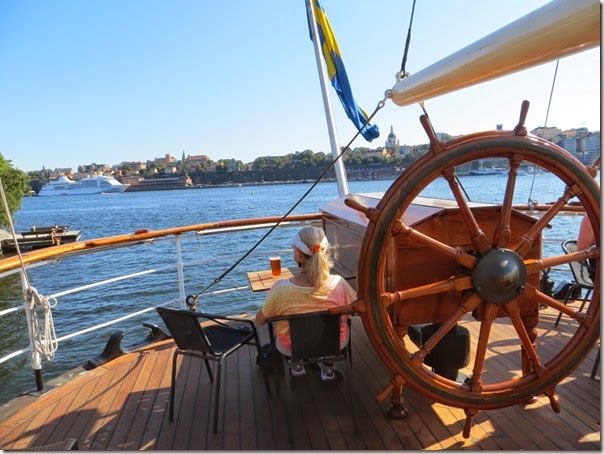 We did get on a boat, though this was once again the Food Boat from a few nights ago. Tonight we managed to get the table at the very stern of the poop deck which was in the shade. To say Linda was a happy girl is a massive understatement. 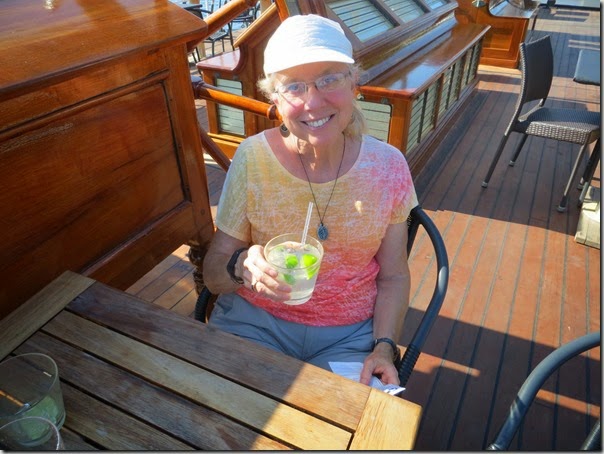 This is really a good Bob photo. Linda wasn’t happy with her gin and tonic again tonight, so for her second glass I talked to the bartender and she got one with way more lime than they usually use. She pronounced very good. Very good Bob. 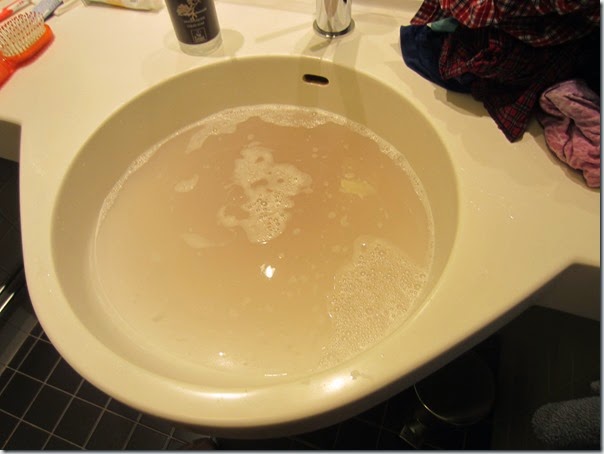 Laundry night tonight. I couldn’t believe how dirty the wash water was. 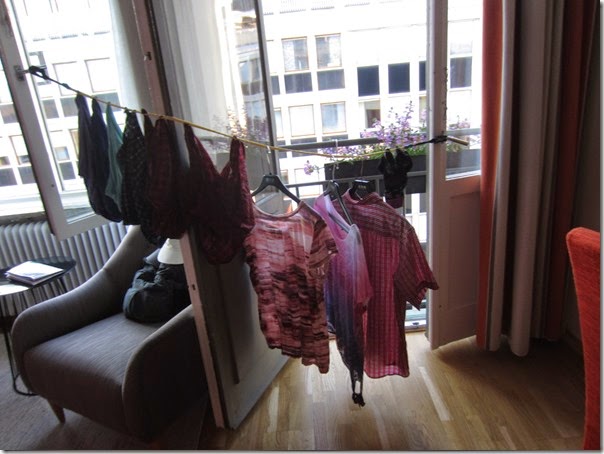 Laundry done and drying. What can I say. When in Europe do as the Europeans do. The temperature today in Stockholm was 95, almost 25 degrees above normal. On the other had it is still cooler than in the Rio Grande Valley. The really bad thing is that here they don’t have air conditioning. But that is nothing to fret about when you can have pickled herring with every meal. Linda on the other hand doesn’t see the humor in that. Poor Baby!