Back in Olden Times 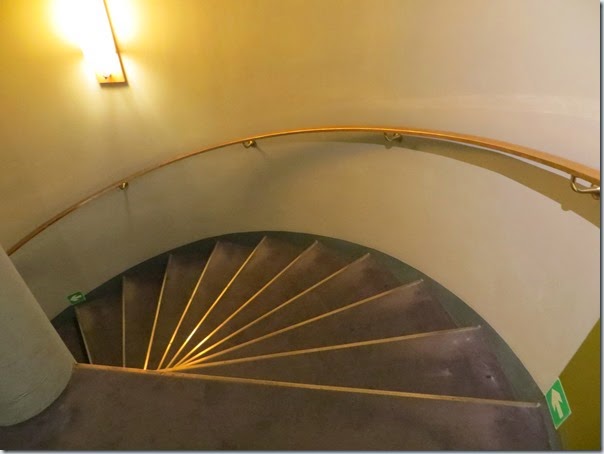 The problem writing about our travels is that I can barely touch the surface of what we do every day, and in fact leave out far more than I write about. There are some things that beg to be mentioned even though space limitations decree they be ignored. This is one of those things. Our room is on the 5th floor which is the 6th floor in the USA. Here the ground floor is the floor you enter on, and one floor up is the first floor. That actually makes far more sense than how we do it in the USA, but then again the metric system makes far more sense with the rest of the world using while we stubbornly stick to the outmoded and virtually useless foot and pound units. Monthly rant finished.

Got off track there for a moment, which is easy to do when you are in a modern, progressive country like Sweden, but anyway, (rant over Bob, rant over) the photo is to show one way I get my exercises, by using the stairs every time I leave or return to our room. And yes, I do admit to being slightly out of breath every time I climb them. We shall see if I am in better shape by the time we leave next Tuesday morning. 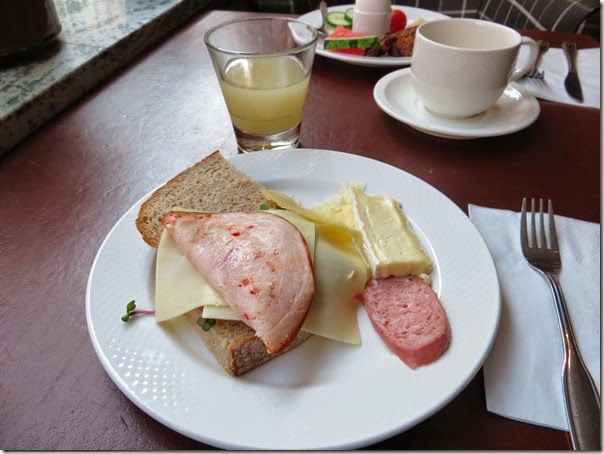 Awesome breakfast this morning. I will let the photo speak for itself. We both had a cup of espresso to finish off our meal. Why is it the espresso machines in Europe can always make such awesome espresso which it is almost impossible to get a good a cup anywhere in the US? Linda drinks more espresso in a day over here than she does in several months back in the states and she is a person who knows good coffee without all the foo-foo stuff when she drinks it. 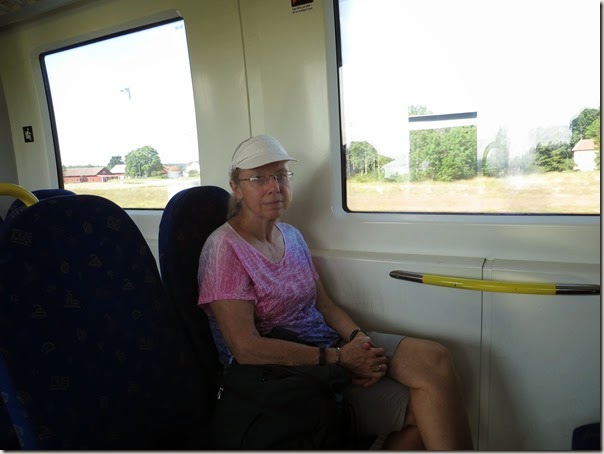 Woman on a train to Sigtuna, the oldest Christian town in Sweden. Small point – The Swedish people do not call their country Sweden, they call it Sverige. The real reason for the trip was to see the rune stones scattered around town and nearby.

Bad Bob, I just hit the publish button in stead of the save button, if you are reading this post now with no more after this, I will be writing more. If there is more, ignore the previous sentence. Bad Bob. 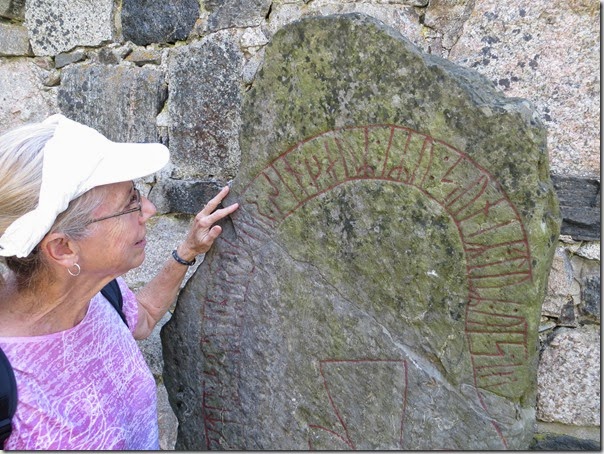 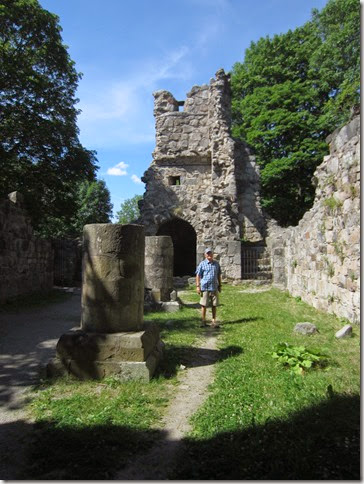 In the ruins of of one the old churches in Sigtuna. Linda has placed an inanimate object in the photo to show the size of the ruins. We were never lost looking for these stones as we would just check the tab and our mapping program would shows where we were. There are apps and then there are apps. 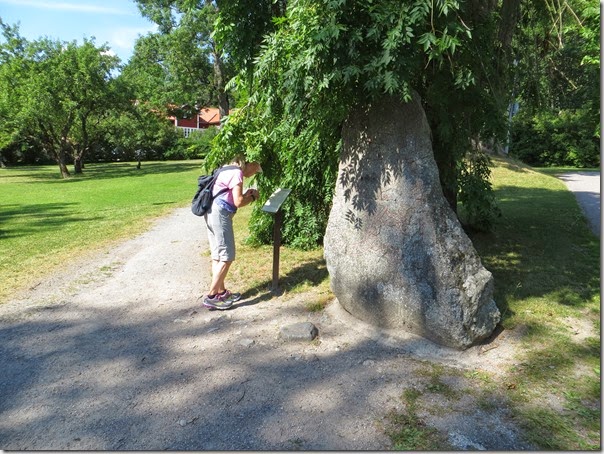 Linda really gets into Rune stones with neither heat of mid-day nor leaves of tree stopping her from learning all she can about each one. Passionate Linda 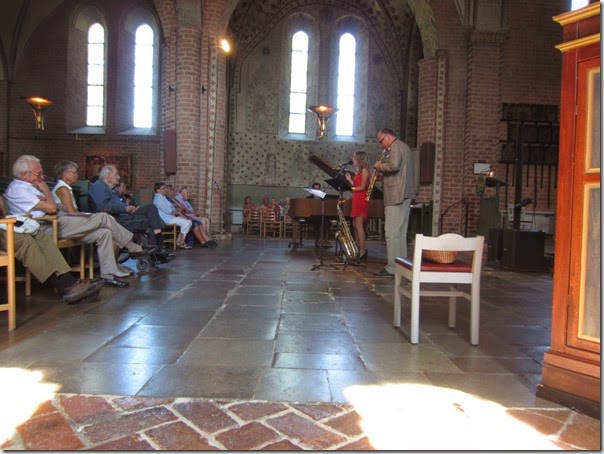 A mid-day stumble upon. There was a noon concert in a church we had visited earlier in the day, and had decided to attend the concert after doing more exploring of Rune stones. By the time we arrived the seats were all taken and we got to sit up front in the right side transept. We were about 15 feet from the clarinet/saxophone player. Once again, we were not tourists, we are travelers. Interestingly enough, the program featured the music of Claude de Bussey and the songs were sung in English! It doesn’t get better than that. 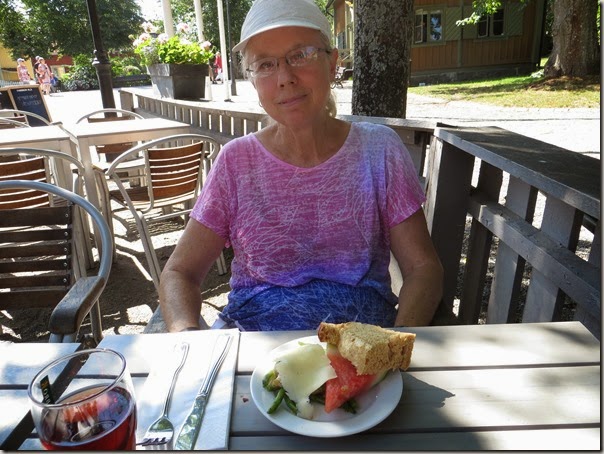 Notice the somber look on my wonderful wife’s face? We ordered our lunch at this little outdoor café on the square in Sigtuna. We both ordered a Swedish style bruschetta with lingonberry juice to drink, mine was a large bruschetta, hers was a small. Shortly after we had our first bites I asked her how her was. The the terse reply was, “Should have got the large one.” No more needs be said about how awesome that lunch was. And yes, the photo is of her appetizer dish, not the bruschetta, but the facial expression was the same. Here she had a bite of the bread and green beans and wished she had taken more. It was a bad good meal for Linda. Poor Baby. 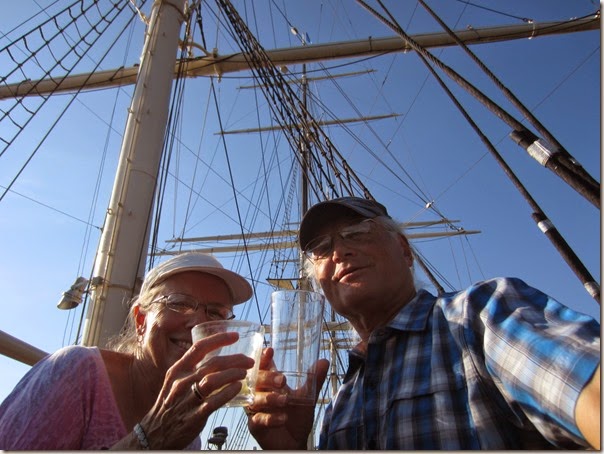 On our nightly walk we discovered “The Unsociable Club Food Ship”, a three masted square rigger where we enjoyed an adult beverage on the poop deck. Linda has decided that she needs to sample more Swedish attempts at making a gin and tonic as this one left much lacking. Drinks are very expensive here, my draft beer costing the equivalent of $10 and Linda’s gin and tonic being a little over $14. Note that nowhere in all our reading about things to do, etc. in Stockholm had we seen any mention of this place. 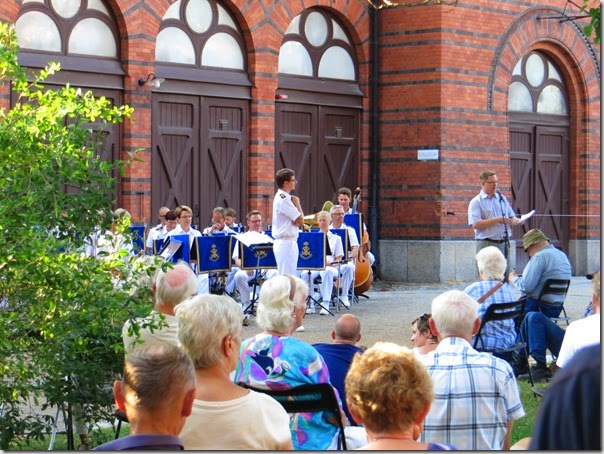 Coming back from our evening walk we stumbled upon another of those Sara N. Dippity moments we discovered they were having a concert in the Royal Mews (The stables). With everything being in Swedish we couldn’t understand which band was playing, but we sure understood the John Phillip Souza marches they played. If we weren’t out and about exploring and poking our noses into places, we wouldn’t stumble upon things like this. That earlier concert we attended, we discovered it when we went into the church and discovered the trio practicing for the noon concert. Travelers Bob and Linda. 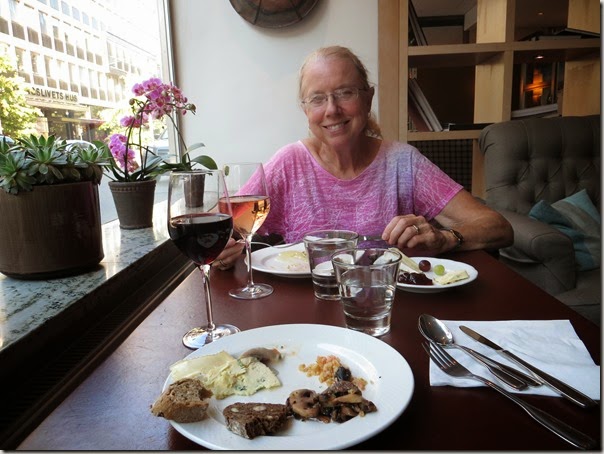 I’ll leave you with another food photo which shows the first course of our evening meal. It was a night where we personally thanked the chef for the wonderful meal and the sommelier for his wine recommendation. But that only hints at what took place and you will have to wonder what that might have been as I don’t have time to write about it as it is now after ten and the sun is finally down. With it rising at 3:30, it makes for a long day.

What a day, may your day have been as awesome for you as ours was for us. And thus, after just a little over a day here we are already thinking we may have return again some day. And this is the actual end of the post. Good Bob.