Lift Those Feet upon High 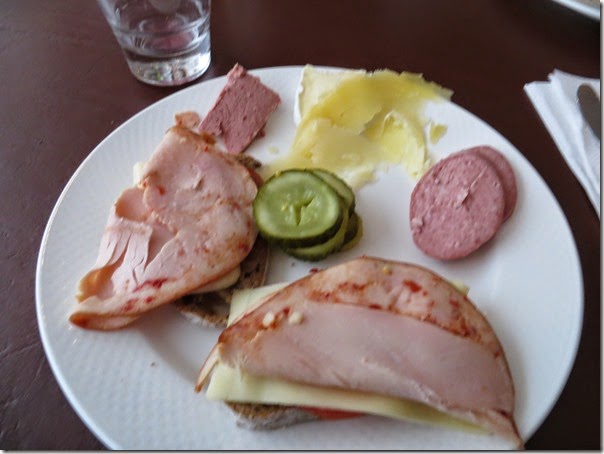 It was a bad morning in Stockholm. There was no pickled herring at breakfast today. Big Bummer. Sad Bob. Smiling Linda. 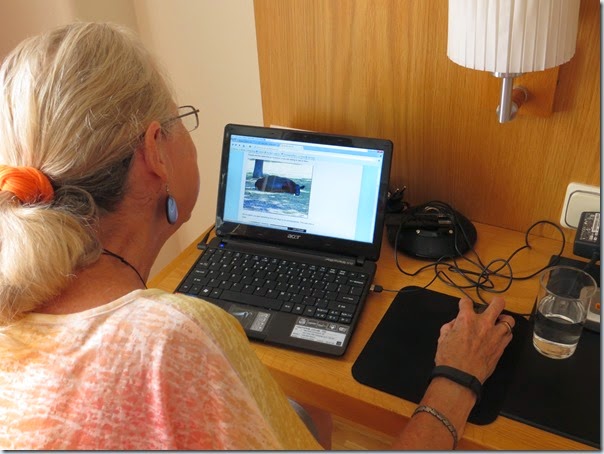 Linda laughing at yesterday’s post when she saw my photo of the sad faced cow. She’s still a farm girl at heart. 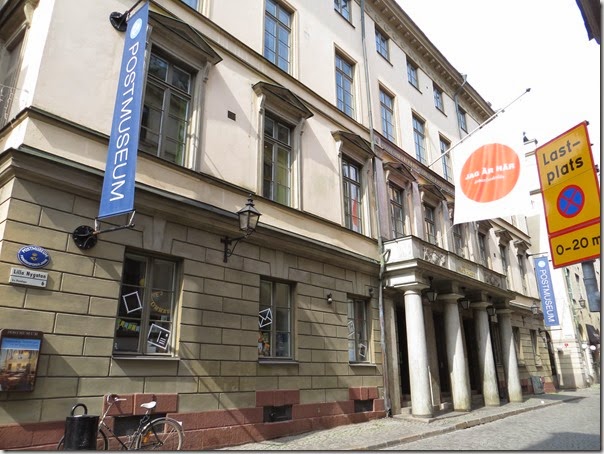 The outside of the Swedish postal Museum because there is a story here. It seems that a certain unnamed (to protect her identity) member of the family wrote down the opening time of the museum on a scrap of paper. a scrap that was somewhere in an unknown place in the universe. It turned out to be 11 and we were there a little after 10. No problem though, Linda just dug into the backpack I was carrying to get out maps so we could find the next museum.

When the pulling and pushing inside the backpack almost pulled me over backwards I sensed a problem. I hear mutters about the maps being in here, but now they are gone. I hear mutters about the male member of our family doing something wrong. it was at that point that I quietly and cautiously said, “I didn’t take them out.” At which point she said she had taken them out, then it got very quiet as she realized she hadn’t put them back. I said nothing as we headed uphill towards what we hoped would be the next museum. Bob, the perfect and silent gentleman. 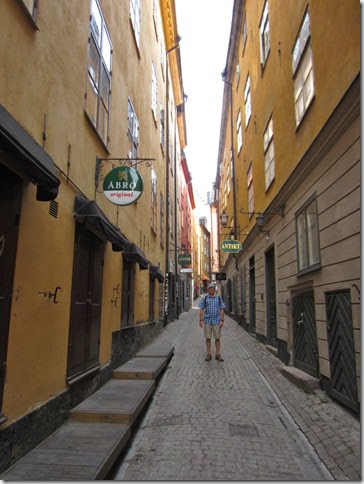 It doesn’t show the up, and I thought it was only a gentle slope, but if you were to ask Linda you would likely learn that a mountain goat would have been scared to attempt it. Poor Baby. 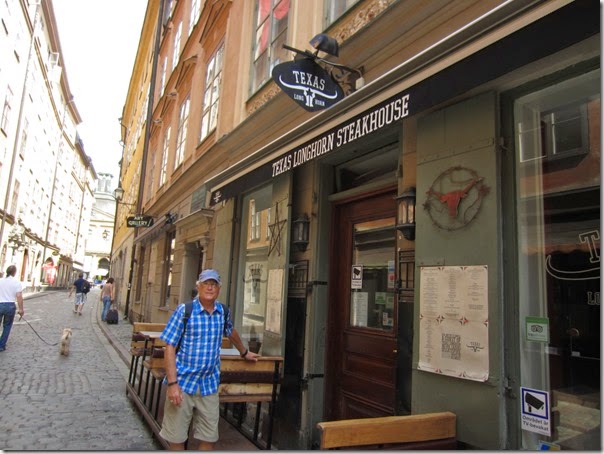 Texas is so big it is even in Sweden. 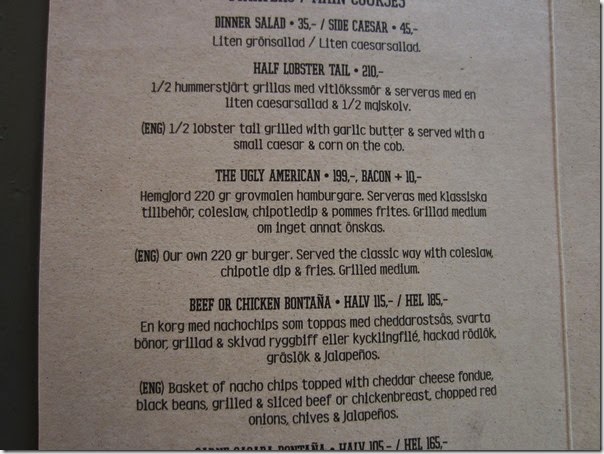 The third item down is referring to non Texans. 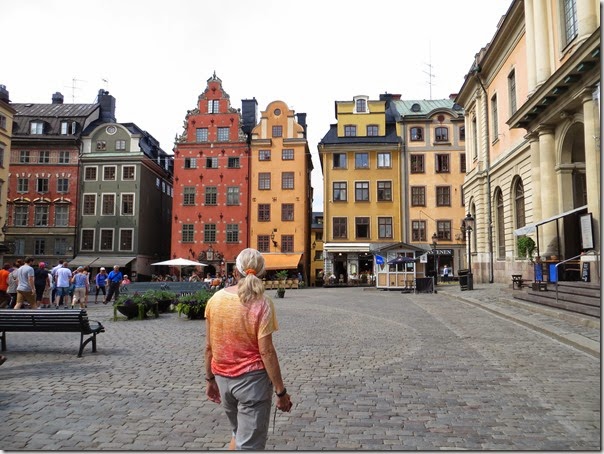 Old square in Gamla Stan. The area, not the woman. Quick Thinking Bob. 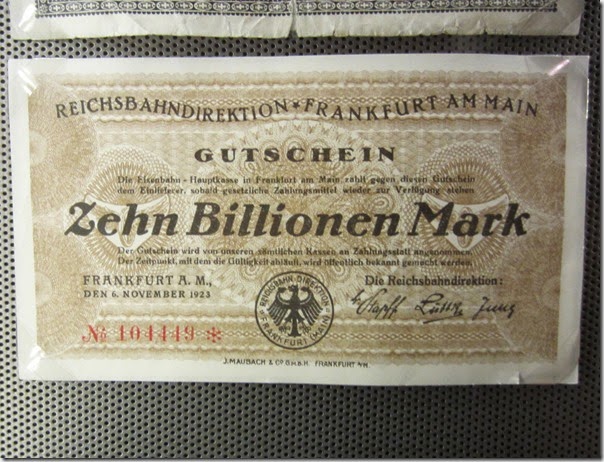 Inflation, you want to talk about inflation. The US has never had real inflation, this is real inflation. A 10 million Mark banknote from Germany after WW1. It also helps to explain how a certain megalomaniac was able to rise to power. 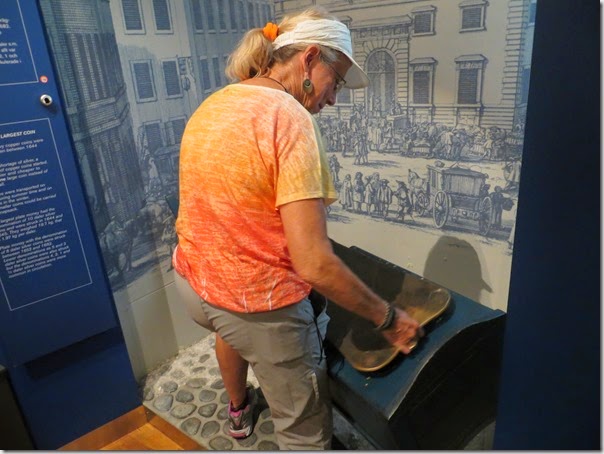 We had a great time in the money museum. This is Linda trying to lift some old Swedish money that was a large copper weight. I joked that this the perfect money for a married man as the little woman couldn’t buy anything since she couldn’t lift the money let alone carry it. 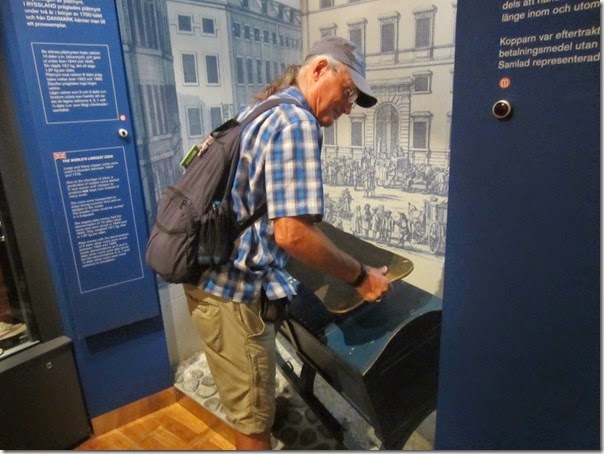 Next thing I know she asking me to see if I could lift it. Didn’t she know how strong I was? so I lifted it right up, not trying to let her see how I might have been struggling just a bit. Next thing I know she is saying, “Problem solved, I’ll just have you carry the money for me.” Poor Bob. 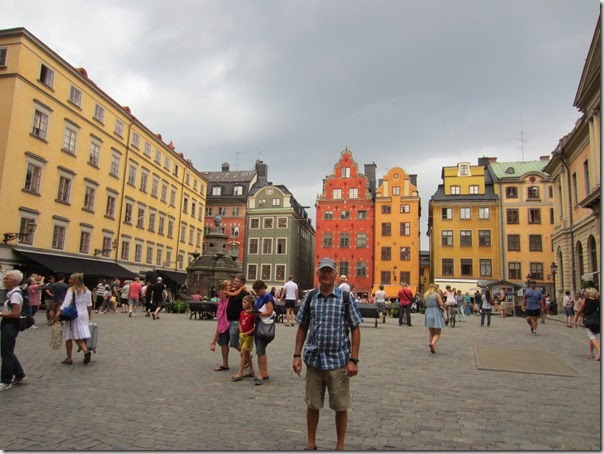 This is actually to show the dark clouds appearing in the background. Though you might also note the footless handsome male model in the foreground. Linda is truly her mother’s daughter, always cutting something off in her photos. 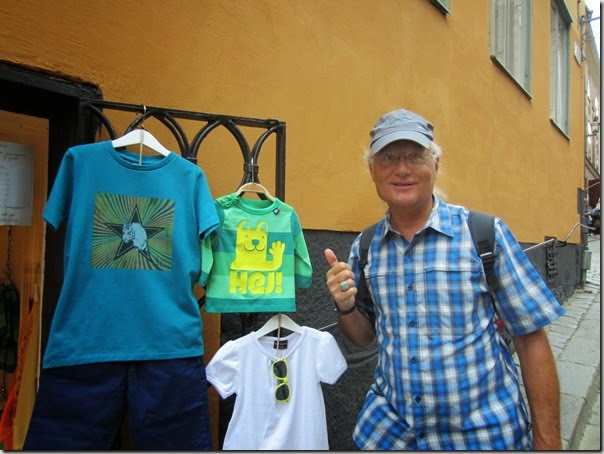 One of the few Swedish words I know, “hej”, pronounced hey. When I really want to fool them I say hej, hej as Swedes often double up their words, just because they can. 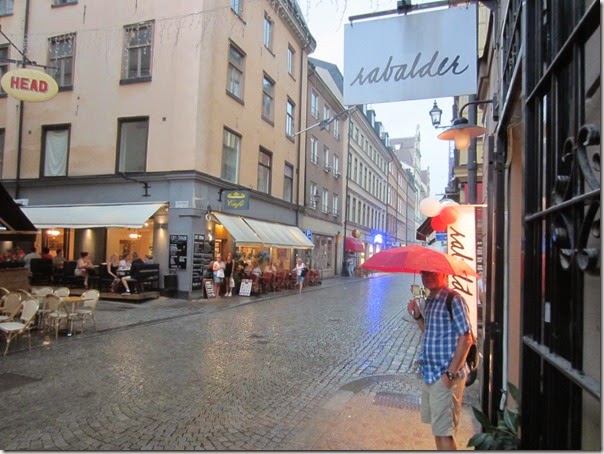 A couple of minutes later the rain came down. 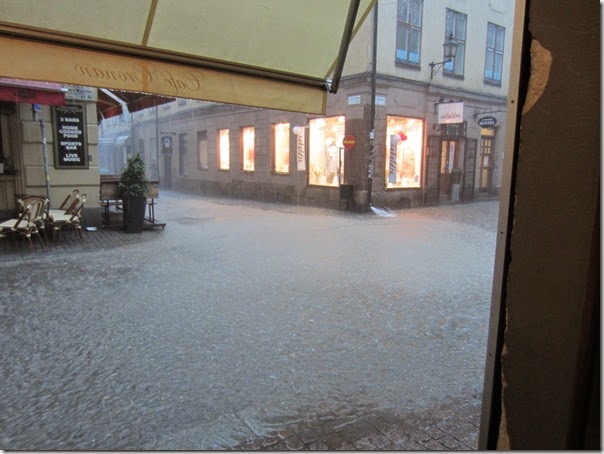 A bit later and cloudburst doesn’t begin to describe what was happening. We were standing in a closed doorway with a single umbrella, so we made a mad and wet dash across the intersection to the small café you see with the lights on. 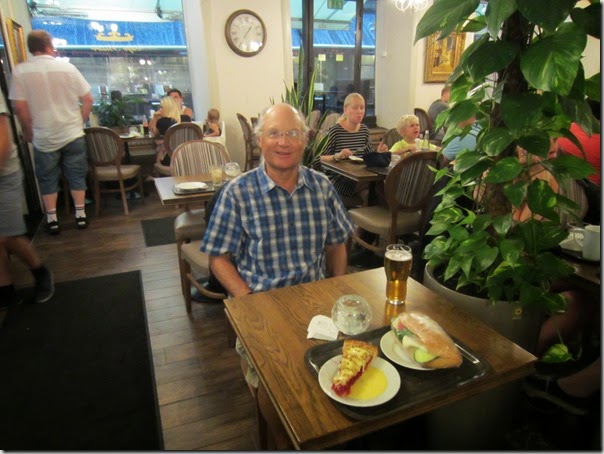 A nice way to wait out the deluge. 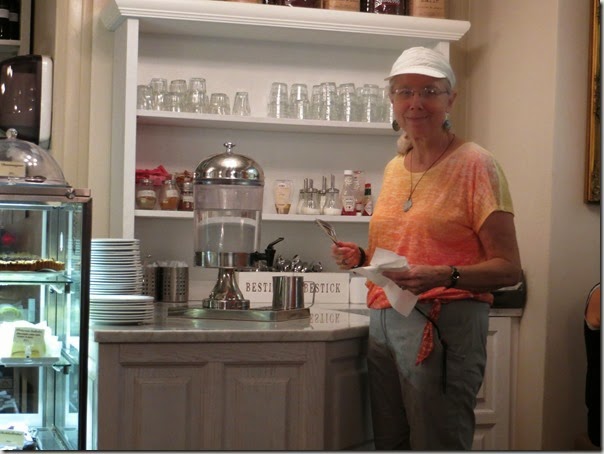 I was amazed at how pretty this waitress was. Lucky Bob. 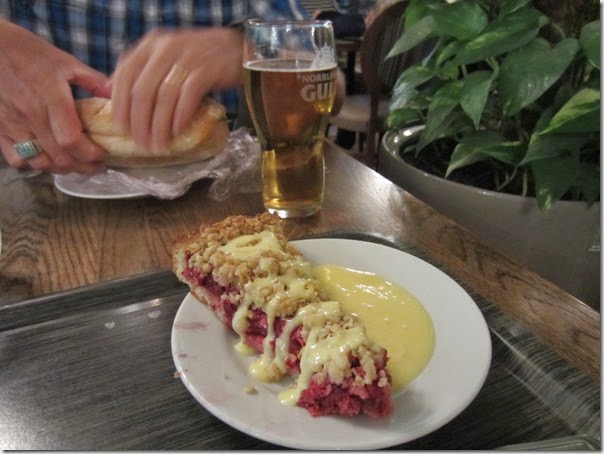 We are talking a real piece of raspberry here. 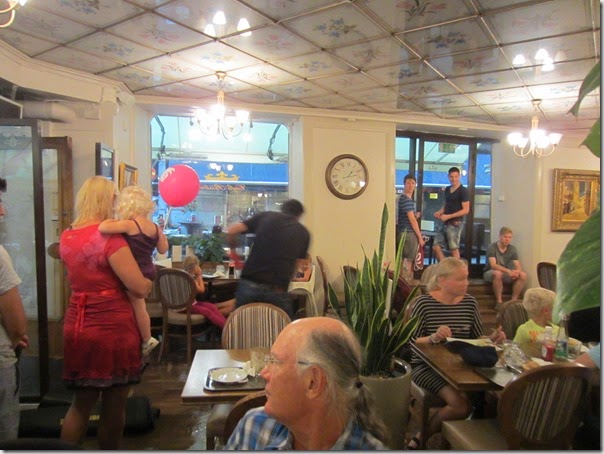 Action behind us, what was going on? 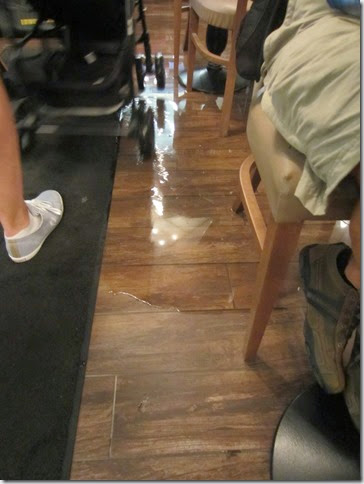 Water was pouring into the café from the street and was already part way under my chair. 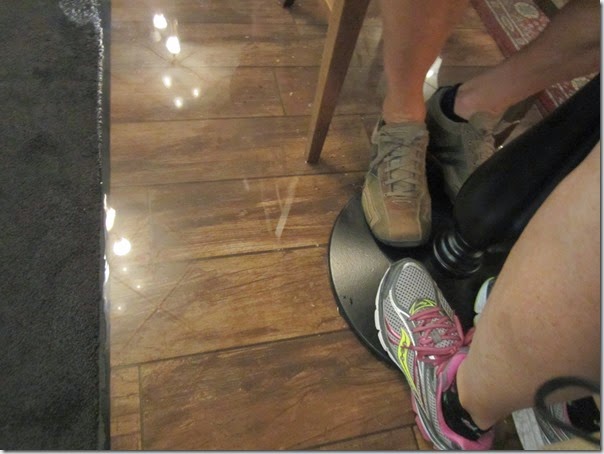 Our feet up on the base of the table to keep them out of the water. 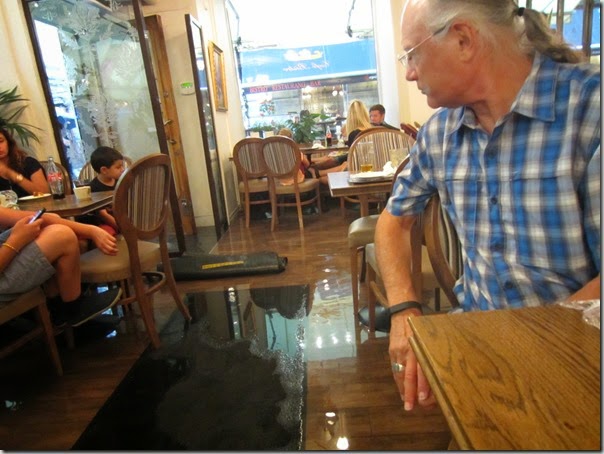 Raised feet were the norm, but everyone kept on eating while the waiters grabbed squeegees and pushed the water out the door. It has us wondering where Sara N. Dippity will be leading us next. 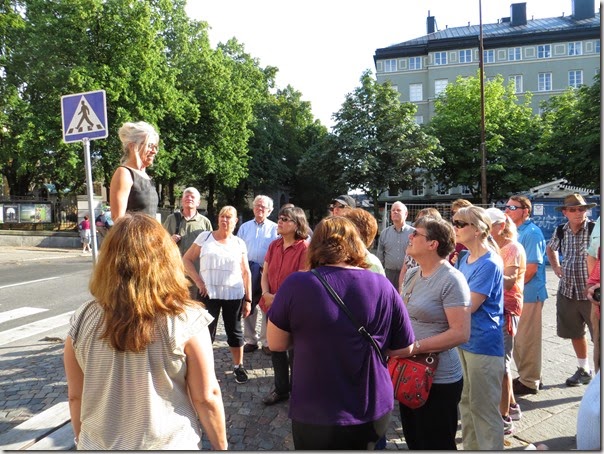 I almost forgot, at 4 o’clock our Rick Steves Scandinavia Tour started, but after the excitement of earlier in the day it was just another tour. Not really. As always our guide is totally awesome and we can see we have a fun filled two weeks coming up.