Fun in the cafe

I had tried to upload this video to yesterdays post, but at 11 o’clock at night after a very long day I was not operating on all cylinders. Thus it goes up today. The only reason we could think as to why we sought shelter from the storm in a café that was about to flood was because Sara N. Dippity led us there. What a Life we Live. 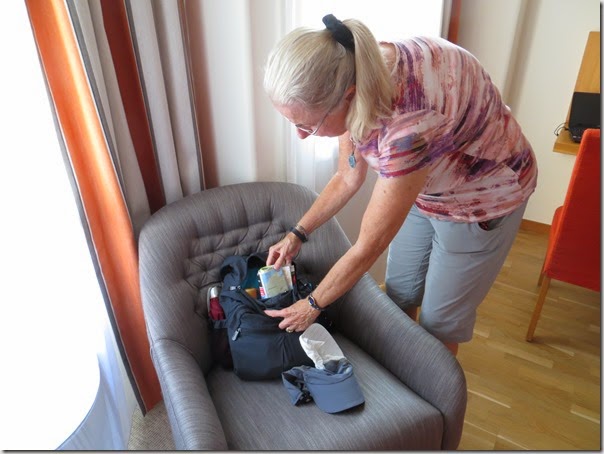 Linda asked me to document the fact she was putting the maps of the city in our daypack this morning. Now I have to wonder what else she might have forgotten to pack. Don’t blame me, my job is carry all those pounds of “stuff” she crams into that daypack. 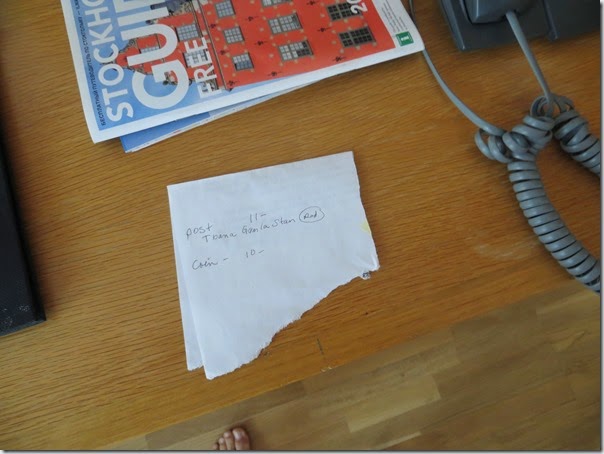 You might recall I wrote yesterday about a scrap of paper that had the opening times of the museums which had apparently it had disappeared in some unknown corner of the universe. This morning Linda found it, though she never divulged its exact location. I took a photo of it but said nothing. Nice Bob. 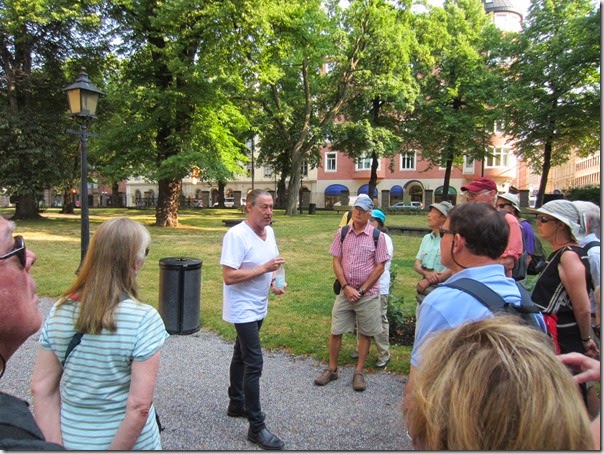 We had a great walking tour of the city today. This is the one thing we miss when we travel on our own and it reminds that we need to check out walking tours – in English – in the different places we visit. Berlin, we’re thinking of you. 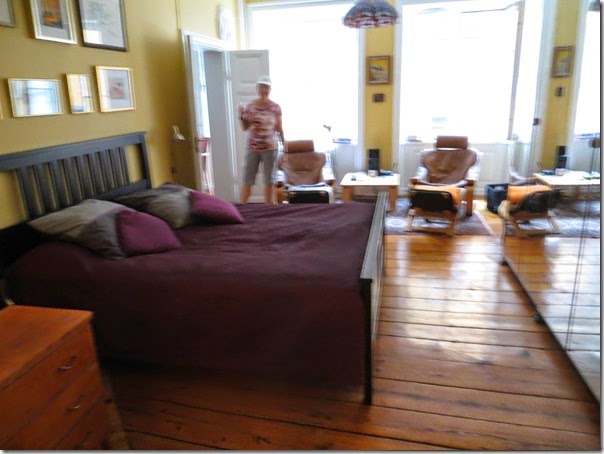 Beautiful, though blurry, Scandinavian woman in a Stockholm apartment. 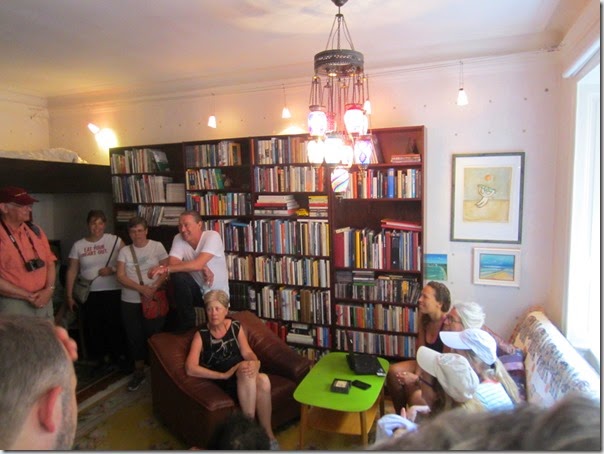 Actually it was the apartment of our guides, and what a treat it was to see what a typical Stockholm apartment looks like. it was also interesting to learn they spend 6 months of the year working 7 days a week in the late spring, summer and early fall, then spend the remaining 6 cold weather in Sweden months in the warmth of the Brazilian late spring, summer. and early fall. Not a bad Life at all if I do say so. 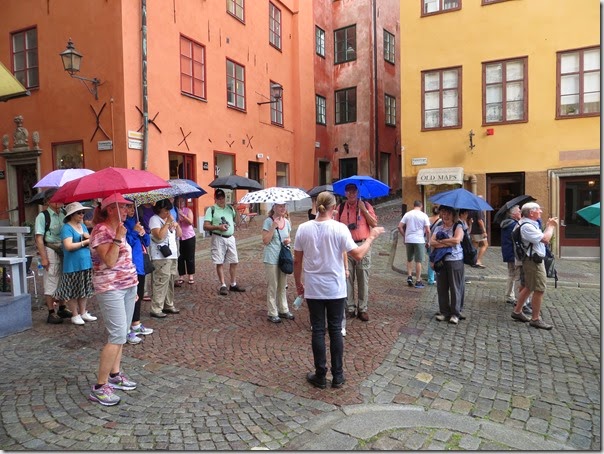 Never let a little rain spoil a great day. Umbrellas to the rescue. And not to brag, but my smart wife made sure our two umbrellas were in the seemingly 40 pound day pack I was lugging around. After this I will no longer comment on the weight of the daypack she assigns me to carry. Smart and Dry Bob. 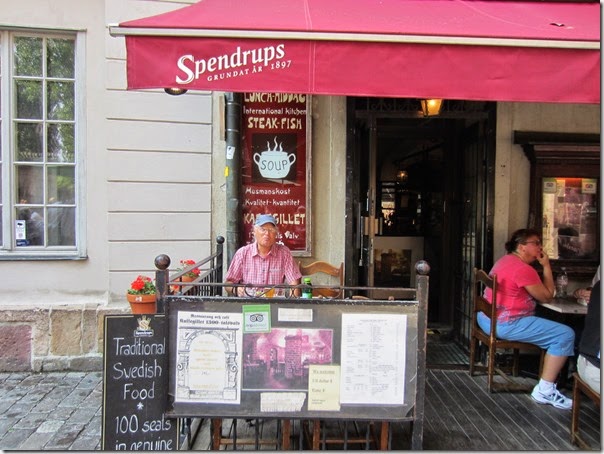 Do you know what smart people do when it is rainy weather and lunch time is coming up? Nothing like a nice table under a awning in a restaurant that specializes in tradition Swedish food. Life is too short to eat at McDonalds, though eating there with their grease burgers and grease fries will will definitely shorten your life. Life is full of choices, make the smart choice. As a side note, food, as is everything else, is really expensive here. This light lunch cost nearly $60 and would have been about $20 in the States. The alternative is not to travel which is no alternative at all. 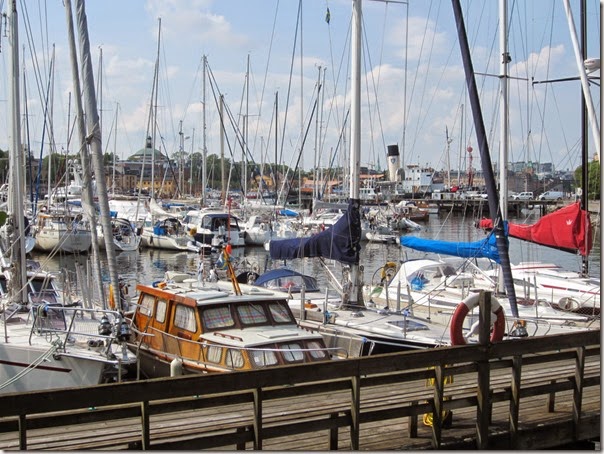 Linda took a number of photos of this marina. And should I fail to post one of them I would be sure to hear about it. Interestingly enough we learned that one out of every four people who live in Stockholm owns a boat. 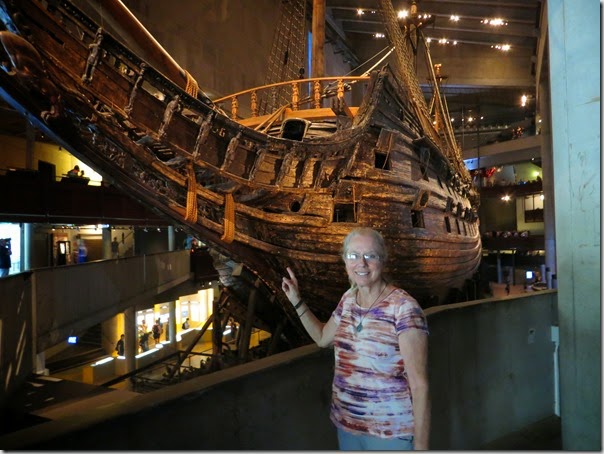 There is no way that photos can do justice to what we spent the afternoon learning about.  The Vasa was the greatest warship ever built when she was launched in 1627. Unfortunately she sank within 30 minutes of her launch and  remained there for over 300 years. Raised from her watery grave, it took 17 years of spraying preservatives on her before she could be displayed in all her former glory. As Linda said, there are very, very few things that cause her jaw to drop when she sees them, but the Vasa was definitely one of them. 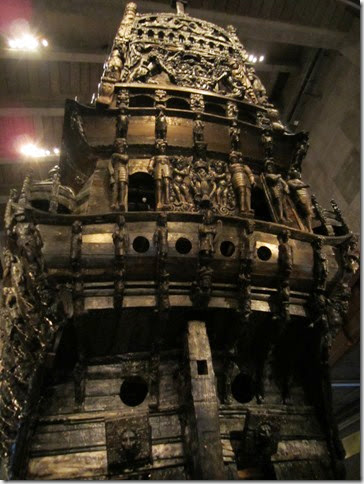 None of these photos begins to due just to the massive size of the ship.

95% of the wood in the ship is original, the new areas of wood are light colored, and all the rope rigging is new. This is a case of the main object and the museum complimenting each other perfectly. 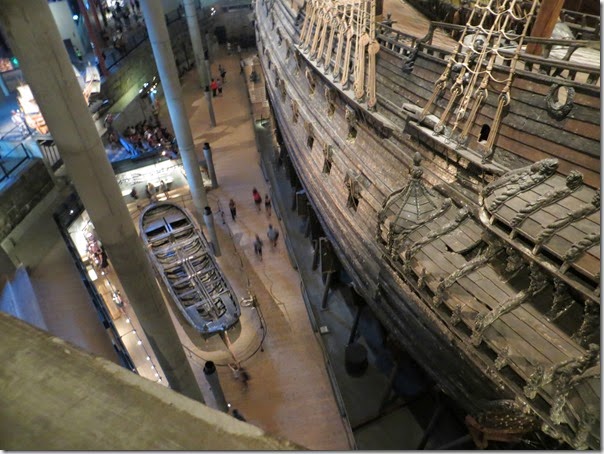 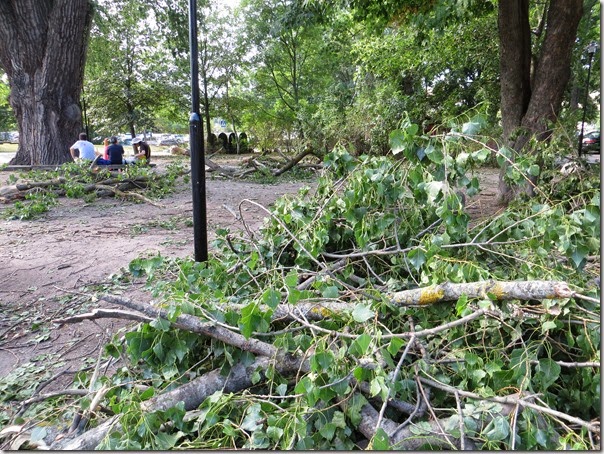 There were numerous places around Stockholm where we saw the after effects of yesterdays big storm. Our guide mentioned that storms like this very, very seldom happen in Stockholm. I just hope we are not bringing this kind of weather along on the trip. 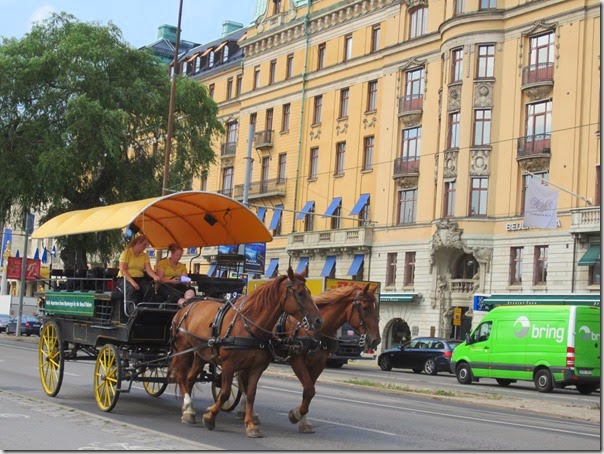 I was afraid Linda was going to wipe out several pedestrians and a bicycler or two in her rush to get to a point where she could take this photo, however no Stockholm citizens were damaged by her efforts though a number of foreign visitors probably wondered what that crazy woman was doing. 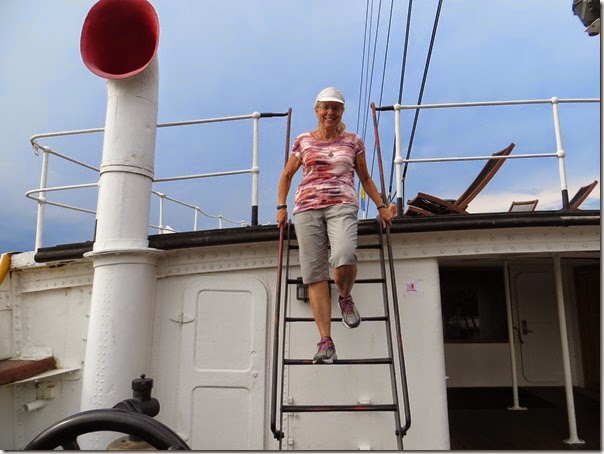 It being our last night in Stockholm I asked Linda if she really wanted to go back to the Food Boat again because we were a very long distance from it and her hip has been bothering her on occasion. I was told in no uncertain terms that since it was our last chance to sit out on the deck and relax we had to go. I think she really, really, really liked it. And with beautiful girls like this to be seen on it, I did too. 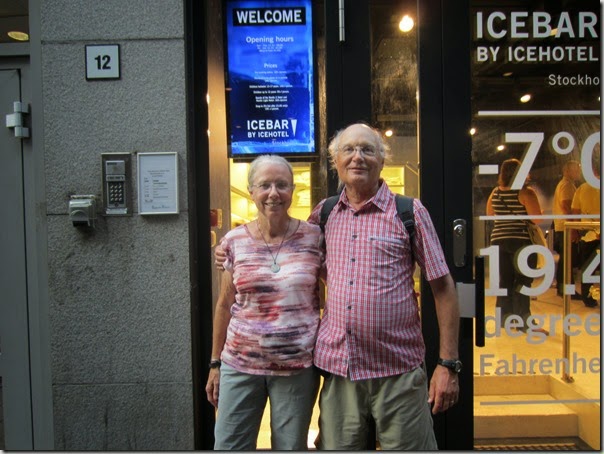 We had decided not to go here, but when the opportunity came as a small group from the tour was going, we just couldn’t pass it up. 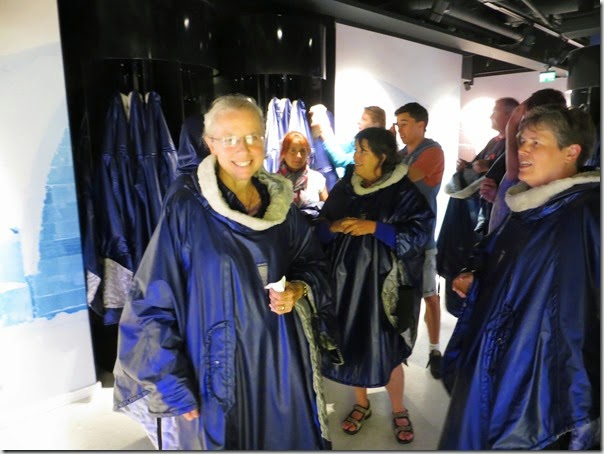 Parkas with attached gloves are donned. 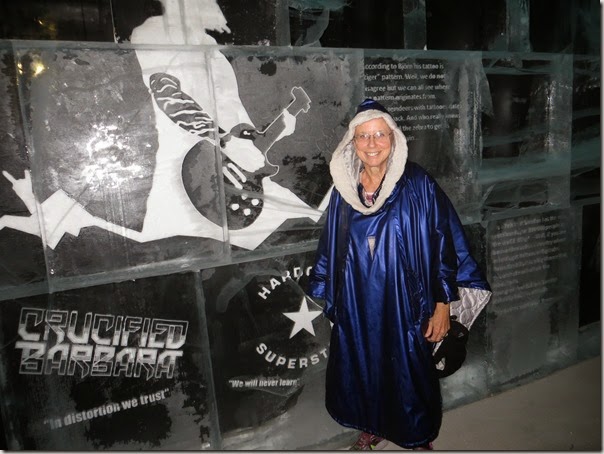 First moments in the cold room of the Ice Bar. Notice that Linda is so excited she has yet to put her gloves on. 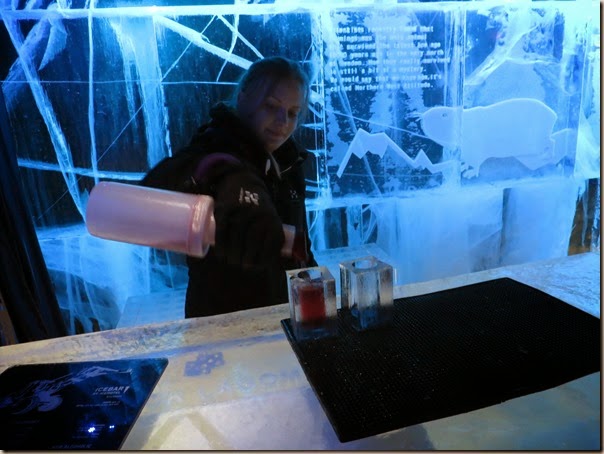 Neat place, everything is ice and you can even take your “glass” home as a souvenir if you want. 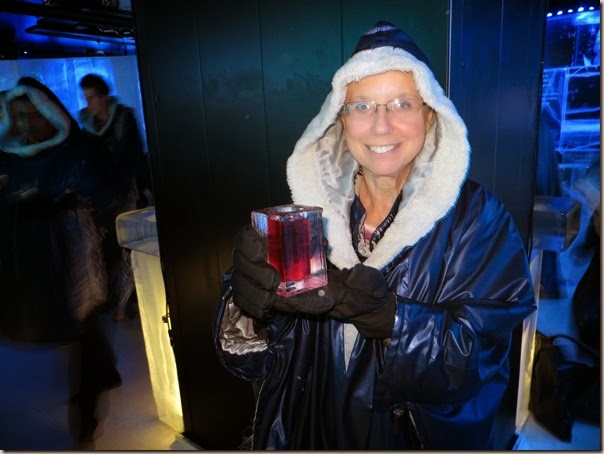 Notice the gloves are now on. It is amazing how cold they can get carrying a glass made of ice. Our choice of beverage was the one that had lingonberry in it. 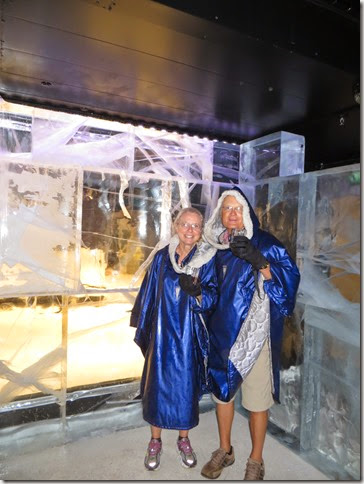 Even though I wore shorts I never noticed the cold, probably because we having to much fun. 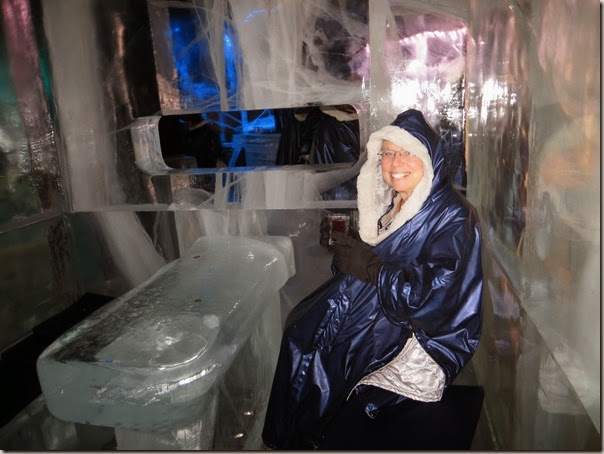 Everything is made of ice including this table and the benches, though they did have a pad to sit on. 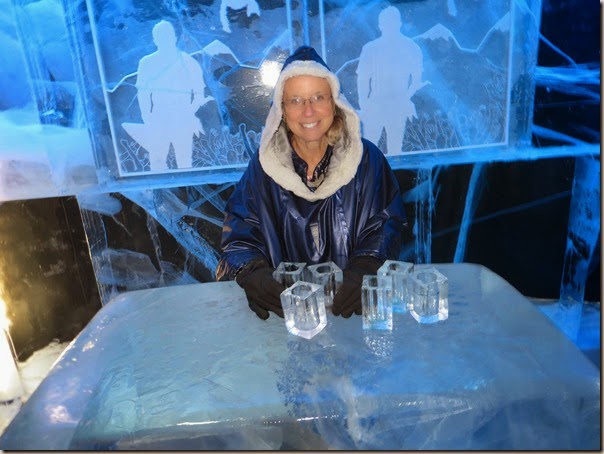 Some people had just too much fun!! Expensive? Very much so, but worth every Kronor. 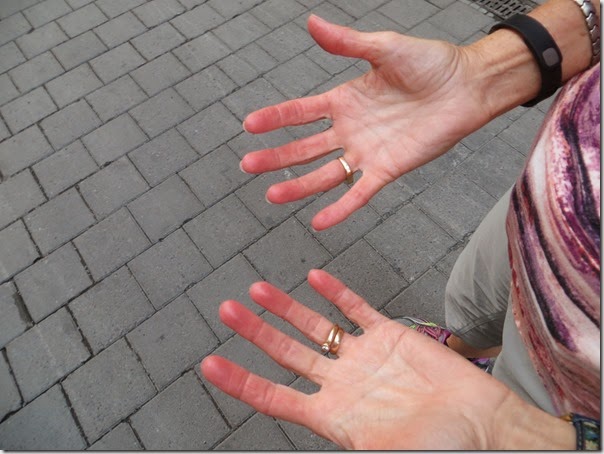 Linda’s fingers stayed cold long after we departed. We’d be walking along and I’d hear, “They’re still red.” It’s like that old song from our youth that goes: Linda had fun, fun, fun until her Bobby took the Ice Bar away. Or at least the words were something like that. 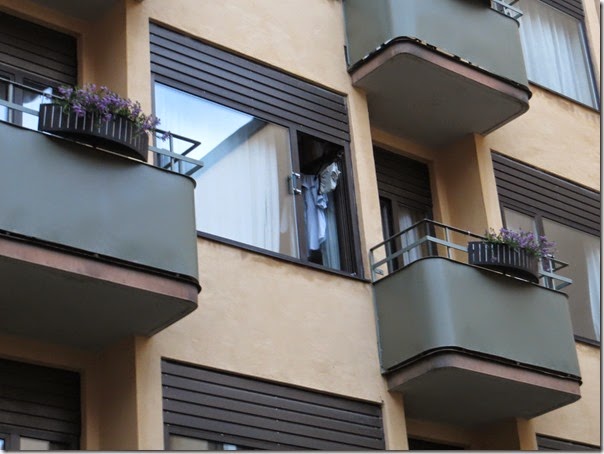 Back at our hotel we spent a few minutes out on the terrace talking about what a fantastic place Stockholm is. This isn’t our room, but very soon ours also had our laundry hanging in the open window. Life is what you make it.