Beneath the Streets of Paris 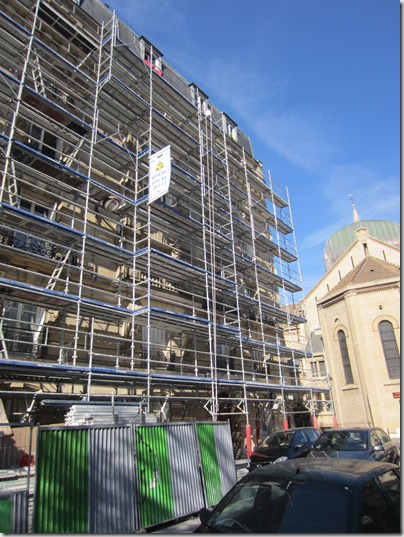 Let me back up a day. So there we were, walking down the street pulling our luggage and looking for our  apartment building. We had been told it was a short street with only two numbers on it. The problem was, not only could we not find the building, we couldn’t even find the street. In Paris it is easy to know where you are as there are these small blue signs in the buildings that are the street names. We walked around the Church, we walked around a small Place (park), and we finally decided that the building covered in scaffolding was what we were looking for. It was, and as luck would have it, all the signs were blocked by the scaffolding. The good news is that there is no scaffolding on the side of the building our apartment windows are on. 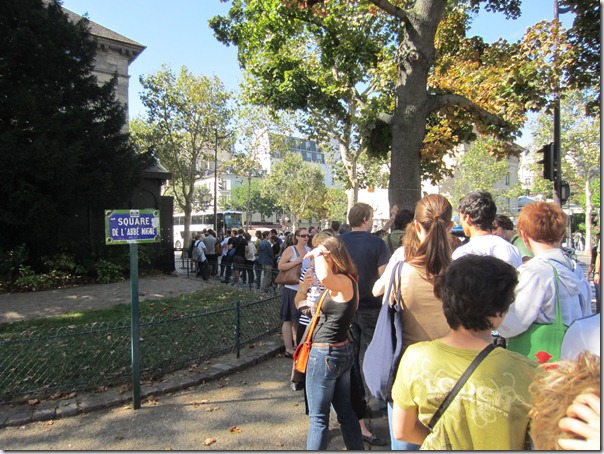 This what we did for an hour and 20 minutes this morning, which was to stand in a line of people waiting to get into one of the many sites in Paris. The day was warm but not hot, and the line was moving, though at a snails pace. Paris is said to be the most visited city in the world, but luckily this was nothing compared to the masses around Notre Dame or the Louvre. Ahead of us was a family from Italy, behind us a family from Austria, and most importantly of all, about twenty feet ahead were trees that would provide shade. 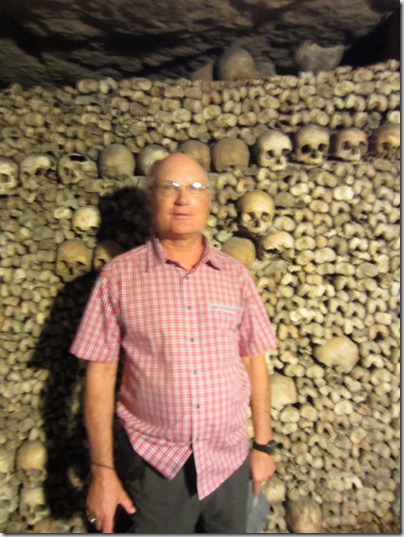 It is what it looks like, but only the smallest portion of what we saw. We were down in the Catacombs, an ancient underground limestone quarry that holds the bones of millions of Parisians. Around 1800 Paris was running out of room in its cemeteries, so they dug everyone up and piled the bones under the streets of Paris in the Catacombs. 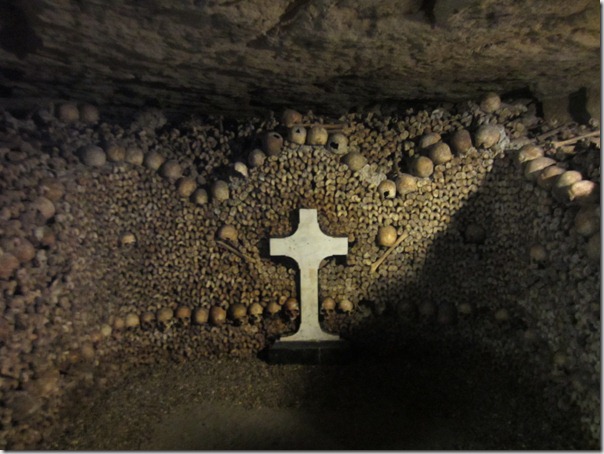 As the bones were removed from each cemetery, they were stacked using the femurs as a sort of wall and decorating it with skulls. Behind this bone wall, all the other bones of the body are piled. Memorials mark which Church graveyard the bones came from, and some walls are far more artistic than others. 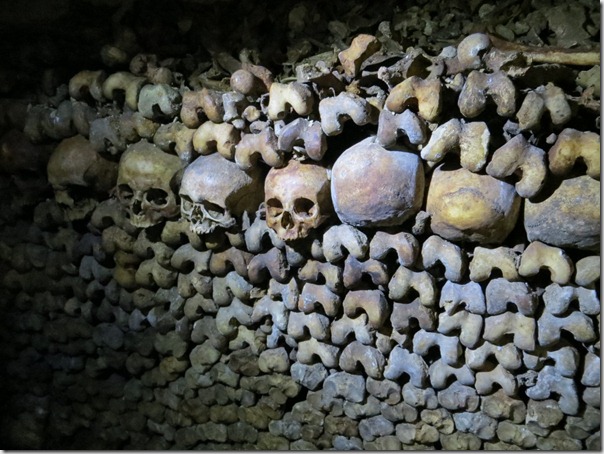 As we walked the corridors, we would see not only the skulls of adults, but also those of children. Flash photography is not allowed, but flashlights are. Linda brought along our new LED light and it really made a difference. The Catacombs are totally self guided, but there are occasional signs (in both French and English) that explain certain areas. We were underground for over an hour, walking through one of the most unusual sites we have encountered.
Those first few bones you see have everyone taking photos and blocking the passage. Then you discover the bones go on, and on, and on, seemingly without end. Eventually you do come to the end, once again emerging into the world you know. Call us naive, but we had no idea what the catacombs would be like. Now we do, and we are glad we visited them. 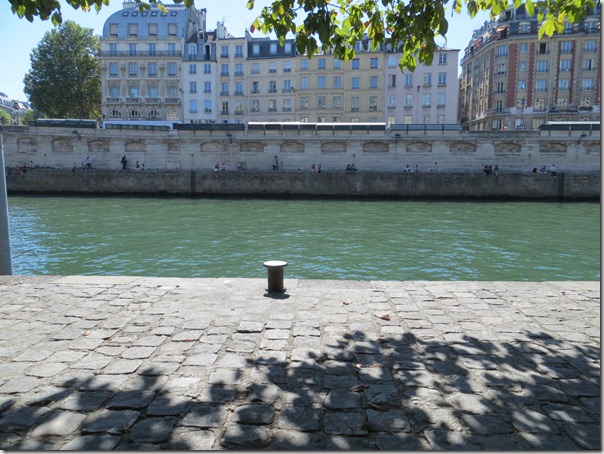 For lunch we bought a ham sandwich and a box of cookies, then walked down to a promenade along the Seine, found a shady spot under a tree, and had a relaxing lunch. If I had taken this photo looking to the left while standing out by the bollard, the towers of Notre Dame would have been visible. Around us we could see others doing the same thing that we were doing, though their conversations were in French rather than English. I couldn’t help but think that here we were, doing the same thing as all the other Parisians on this glorious, warm, sunny early fall Saturday afternoon. As Linda said, “This is a first.” The line for the tiny restroom behind Notre Dame Cathedral. What is the first, is the relative length of the lines. Usually the women’s line is very long and the men’s line is nonexistent. Six men and two women, that’s unreal. Now the women had two stalls and the men only one, but men’s did have a Pissoir, which is why the men’s line normally moves faster. The funny thing was that Linda, she of the short line, needed to go and I, of the long line, didn’t. 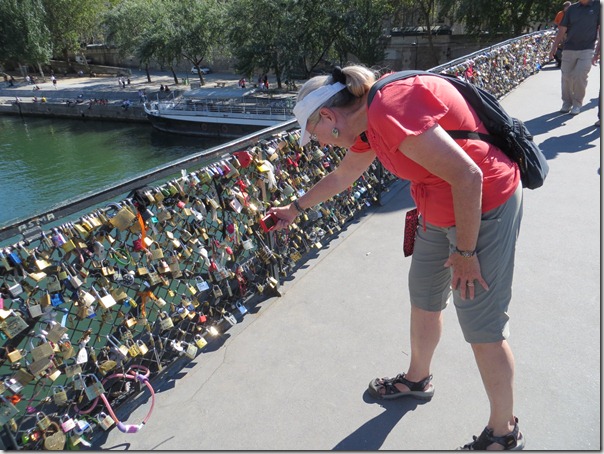 There are love lock bridges and then there are “Love Lock Bridges”. Both sides of this bridge were decorated with what seemed to be thousands of love locks. 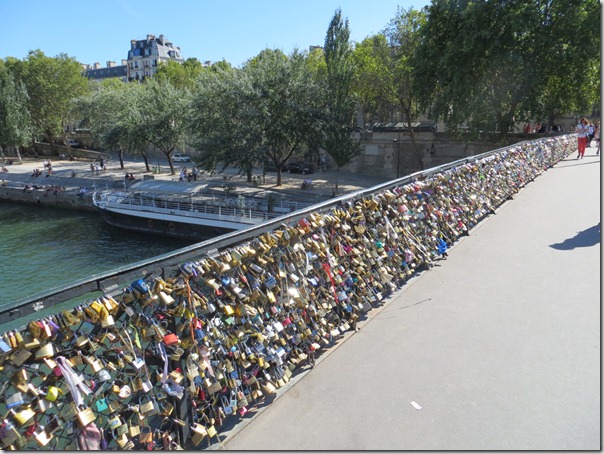 We are talking a lot of locks here. 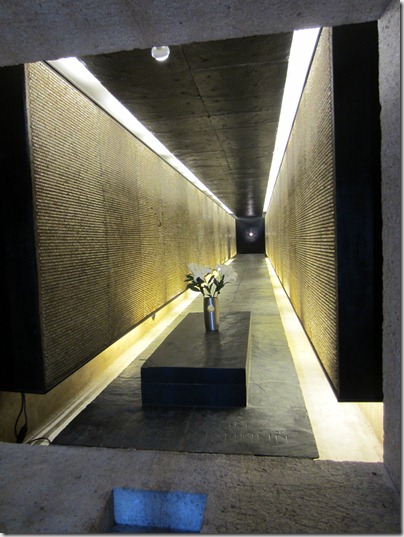 Nearby is a more somber place, the Memorial to the Martyrs of the Deportation where the nearly 200,000 of men, women and children of France who were deported to the Nazi death camps during the Second World War are remembered and memorialized. It is powerful testimony to what hatred can do. 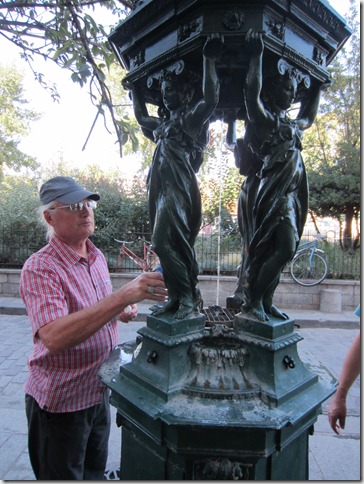 A fountain where one can fill their water bottle with cold water. It’s been here since the 1800’s and it’s just as great today as it was back then. At least I think it was great back then, not having been around at that time myself. I would have checked with Linda to see if it was that good back then, but she's not here as I type this. Bad Bob. Really Bad Bob. 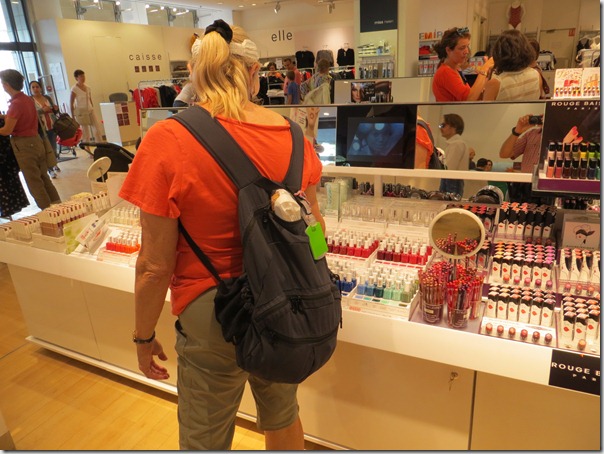 Typical Parisian woman on her way home with a baguette sticking out of her backpack. Paris, it is a place of great food and beautiful women. 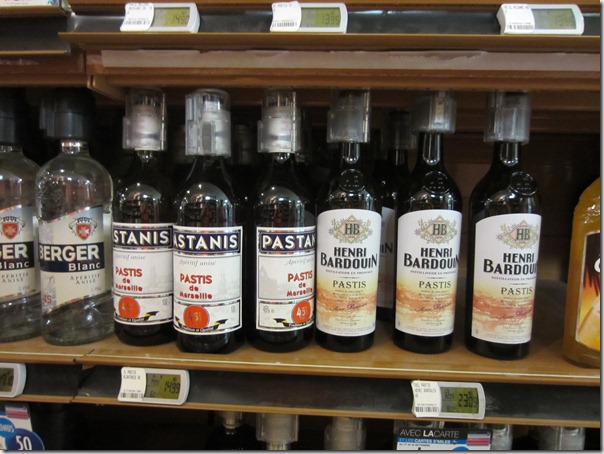 John, this is for you. There are shelves of Pastis from a dozen or more distilleries in the stores. Maybe we just bought the wrong brand. Or is it that Pastis is Pastis, is Pastis. Meaning that if it looks like anise, smells like anise, and tastes like anise, it is anise, and once is enough. For all of you who are wondering what this was about: A few years ago we rented a canal boat in France with our good friends, John and Judy. John and I ended up buying a bottle of Pastis, as it is a very popular drink over here. Pour a little clear Pastis in a glass, add water, whereupon it turns cloudy. The ladies took one sip, declared it tasted terrible and never had anything more to do with it. For several days John and I would bravely have another Pastis every evening. Eventually we agreed it tasted terrible and got rid of most of the bottle. You can only imagine the gales of laughter from Judy and Linda as we admitted defeat. 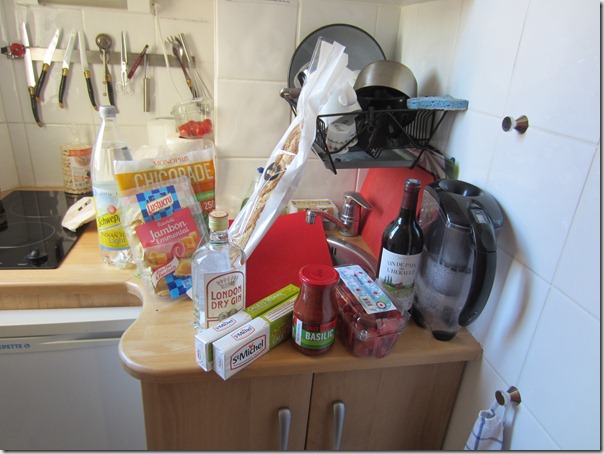 There is a story here and it is not that Linda is going to have gin and tonic tonight. It is that after a hard Saturday of sightseeing, do not stop at the Monoprix at 5 PM to buy something for dinner. No joking, a Wal-Mart on the day after Thanksgiving would look positively deserted compared to mobs of people in this Monoprix.
Okay, so maybe I did exaggerate a little, but we often had to wait to even move in the aisles, it was so busy. But once I saw the smile on Linda’s face as she enjoyed her first gin and tonic in weeks, all was forgiven. In that pile of groceries was fresh pasta and pasta sauce, but just like the night before, once were done with our appetizers we were too full to eat anything else. To put our appetizer course into perspective, Linda joked that some French farmers were going have to work overtime milking goats to keep me supplied with goat cheese. When Life is good, Life Is Good.
Posted by Bob and Linda at 3:51 PM