A bunch of Dead People and a Great Meal 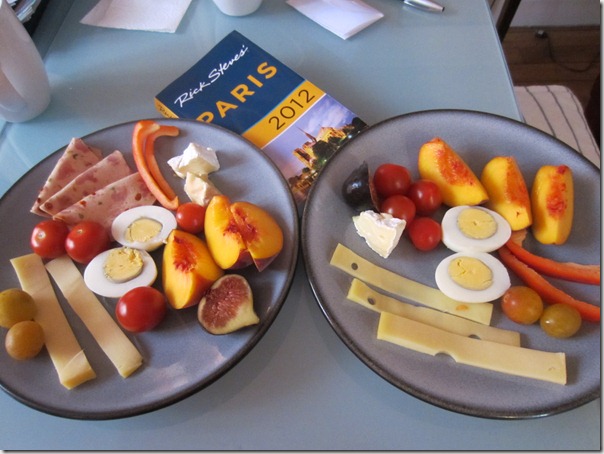 Interesting day today, one where we took 313 photos, 310 of which were mine and the one above was one of the three Linda took. If I didn’t know better I’d think she likes to brag about her breakfasts, but knowing “Mrs. Practical” the way I do, it doesn’t have anything to do with bragging, rather it is just showing the fact that her breakfasts are the best in Paris. You will note that the family cheeseaholic made sure she got the most cheese, as well as one more tomato than yours truly. 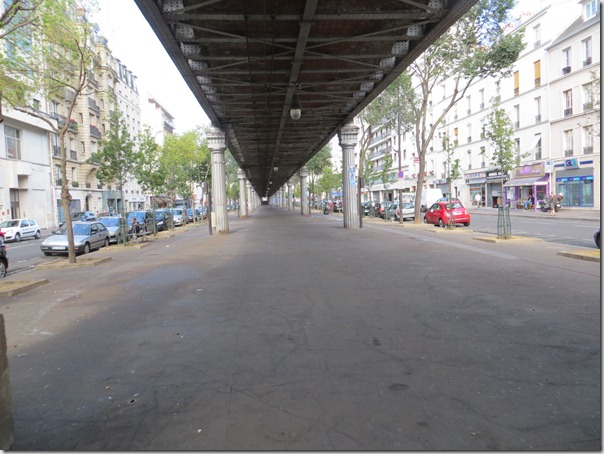 Photo taken to show what a difference a day makes. Yesterday we posted photos of this space jammed with markets and buyers, two of which were us.  Today it is completely different. All the trash and debris has been swept up, and it looks like the normal clean Paris street. We watched yesterday as only moments after the market closed. street sweepers, many with just brooms, descended on this area and began cleaning it up. It’s called pride in your city. In our country we call it a budget crisis and leave our cities looking like garbage dumps. In Europe people understand that they have to pay taxes to have clean cities and water, decent health care and a great life. In the US we want someone else to pay for all that we want and complain bitterly when an honest politician explains that that someone else is us. From each according to his ability, to each according to his need. With a little tweaking it’s really not such a bad idea, just impractical given our current culture. After all, that’s exactly what the man who walked on water some 2000 years ago taught. 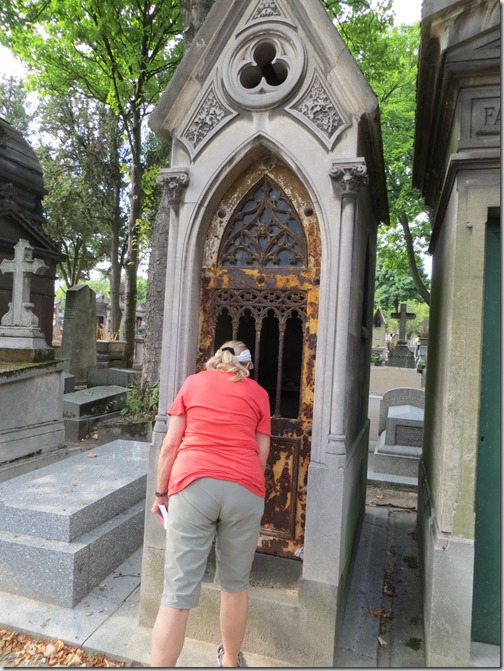 So why do I think you can guess where we went today? So why does my beloved wife always have to look into every open tomb that we pass by in a cemetery? 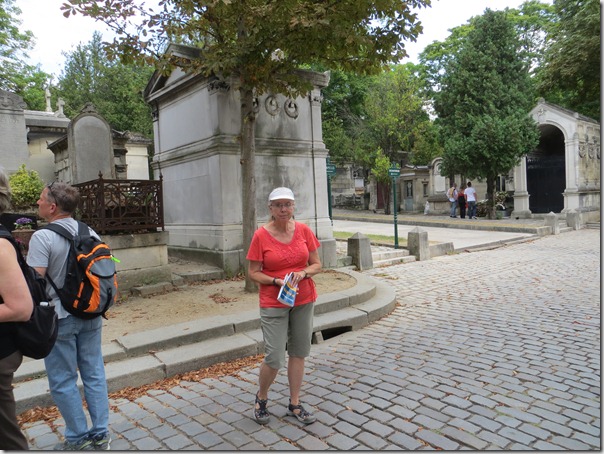 We actually spent most of the day wondering around one on the main cemeteries of Paris.  You will note this obviously non-Parisian, guide book in hand woman, is looking lost as she wonders where in a cemetery of nearly 100,000 graves she is. And I will add that her husband was just as lost as she was. 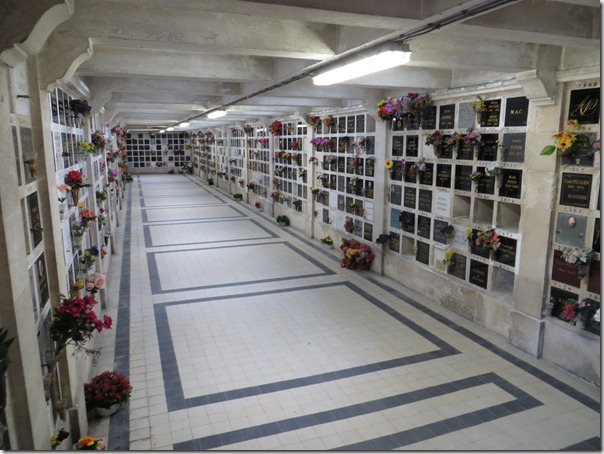 Just a day or two ago we wandered through the Catacombs where the bones of millions of Parisians are piled atop one another.This is the Columbarium at this cemetery where thousands of Parisians are housed in tiny crypts. This is literally a gnat on the elephants back compared to the number of places in this gigantic Columbarium. 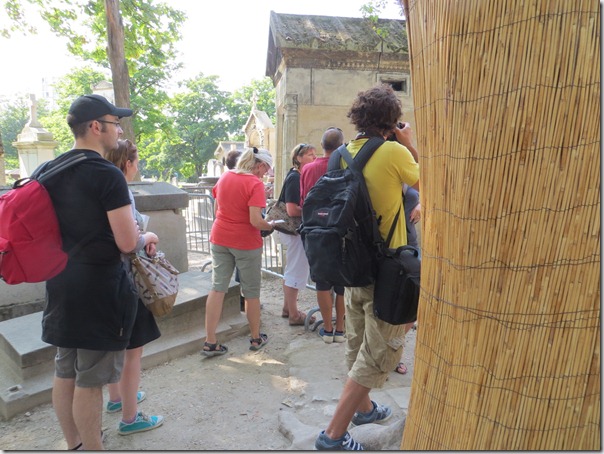 So what is this all about? Ever hear of “The Doors”? Remember when Jim Morrison died of a drug overdose in a Paris apartment? Ever wonder what happen to him? Linda is is trying to find out. 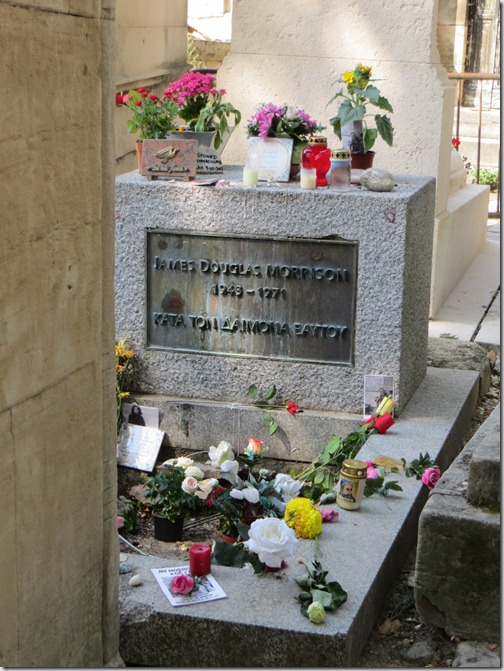 Just to prove that the evil that men do is interred with their bones, while the good lives one. It goes to show what fame a second rate musician with a second rate voice and lousy songs and music can achieve if he dies young, even if he is a drug addicted loser. 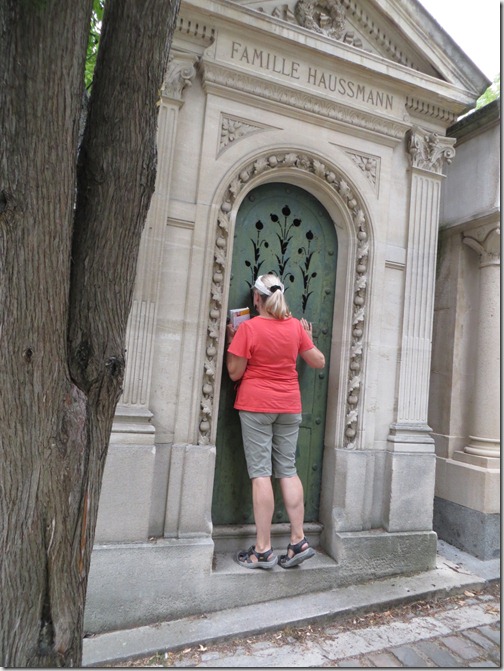 This is the tomb of the man who was responsible for the wide boulevards of Paris. The roads radiating from the Arc de Triumphe, and the fact that the revolutionary mobs could never again barricade the streets of Paris. You have to be in Paris to appreciate it, and if you are in Paris you will know who Baron Haussmann is. 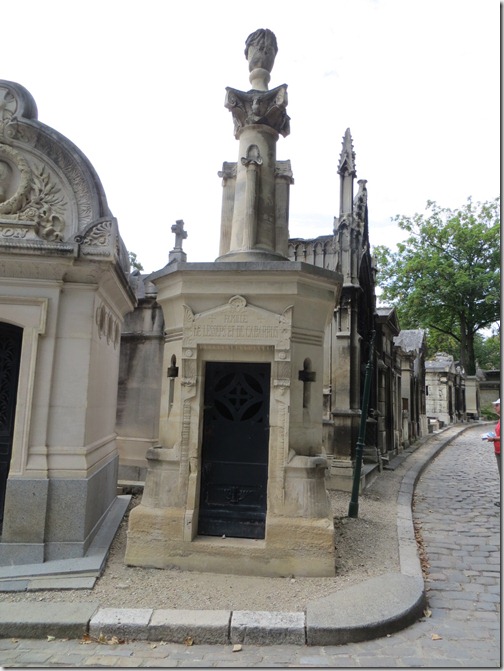 It is now my turn. In this cemetery we saw the graves of the famous and the want to be famous. We saw world renowned composers, actors, actresses, writers and playwrights. We saw inventors and scientists next to greats of the religious world. But I saved the best for last.

Actually we hadn’t seen this grave, but Linda reminded me as we were getting ready to leave, and a long trek back into the cemetery followed. This is the grave of Ferdinand de Lesseps, the man who not only built the Suez Canal, but who also started to dig the Panama Canal. As American’s we glorify Colonel George Washington Goethals as the man responsible for the Panama Canal. Unfortunately, or maybe fortunately for the rest of the world, there is far more to the story than the narrow American version of what took place.
The more we travel, the more we realize just how much history has been twisted to favor the American viewpoint as opposed to what really took place. I have to feel sorry for those that see the USA as the world’s moral compass when in reality the USA has committed the same acts of hatred and genocide as in those countries its well meaning but ignorant citizens condemn. The most difficult thing in all the world is to look into the mirror and to acknowledge what we see. 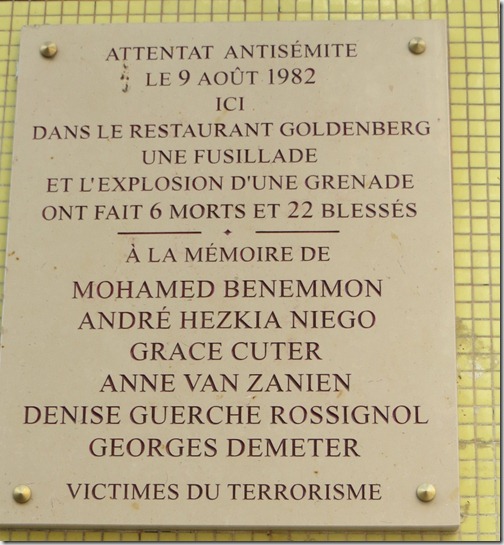 This is what the real world like. This is what hatred leads to. I think everyone can read enough of this to understand what happened on this street corner in 1982. It happened in the Jewish section of Paris. Read the names and understand that terrorism respects no person, no matter who they are, or what their nationality. 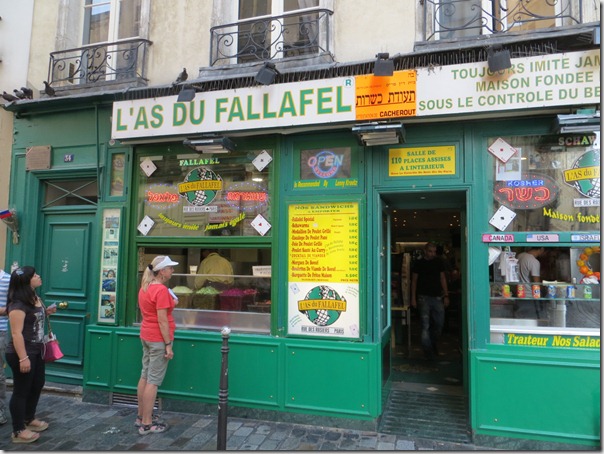 A few feet away at a Jewish Falafel place we enjoyed the best falafels we have ever eaten in our lives. 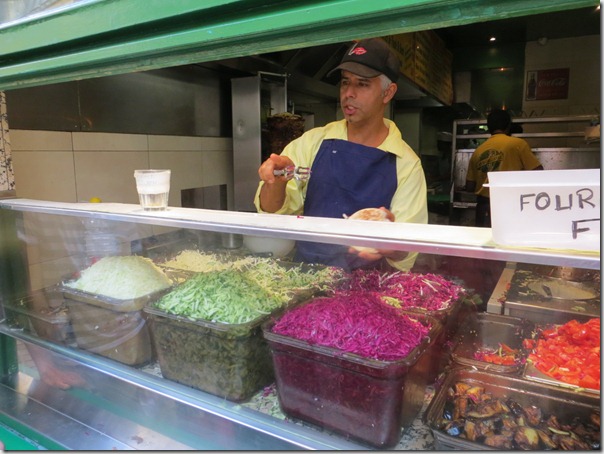 The call themselves the “Falafel King” and after eating one of their falafels we have to agree. Their hands fly so fast as they fill your falafel with ingredients that you can not follow them. 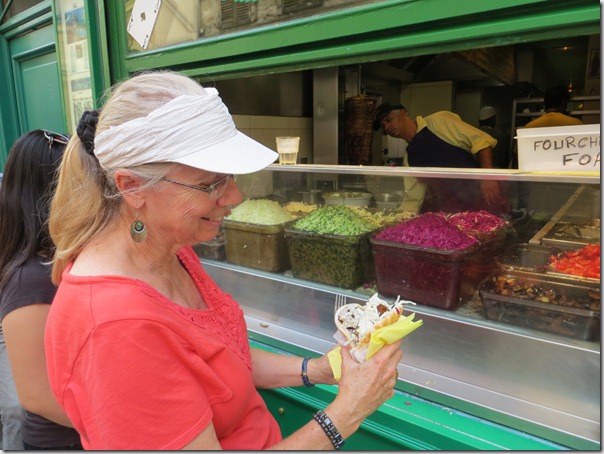 The end product, a falafel that is filled to overflowing with awesome fresh ingredients. It cost Euro 5.50, it had at least 11 falafel balls in it. Neither of us could eat all of our sandwich. Both of us decided that the next time we are in Paris we will rent an apartment in the neighborhood known as the Marais.
One can live life in a small world, or one can Live Life in the World, the choice is ours. We are glad of the choice we have made.
Posted by Bob and Linda at 3:16 PM